Gunnar Örn Sigurðsson has been making Orn Custom Guitars by hand in Reykjavík, Iceland for over 20 years, and his ‘dipping process’ is a concept he claims is a first in the art of guitar building. Lars Mullen flies north to see Gunnar’s creations up close… 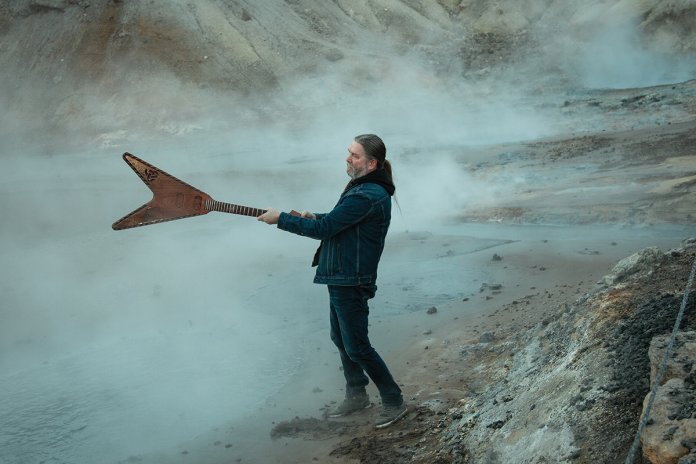 While there are plenty of stunning guitars being produced by skilled luthiers around the world, it’s not often a builder can legitimately claim to be doing something unique and original in the field of guitar design. Gunnar Örn Sigurðsson can – and his approach is entirely inspired by his Norse heritage.

“I’ve always been fascinated by my Viking ancestors,” Gunnar tells us when we visit his workshop in Reykjavík. “Especially the leather and steel tunics that made up their uniforms. This is a theme that runs throughout my Viking Series guitars, which includes the Mjölnir, Thorso and the Yggdrasil models. I’ve managed to successfully capture the old worn-leather look on the guitar bodies, especially the hand-carvings, although it’s not a straightforward process.”

The truly unique aspect of the process, however, comes in the way that he uses Iceland’s most famous geological phenomenon in the making of the guitars, which ends up giving the wood a unique look that’s akin to old leather…

“The guitar bodies are actually submerged in a volcanic spring here in Iceland,” he tells us of this fascinating idea. “There are many hot springs, but I’ve been going to a particular one for years, far away from the tourist trail. 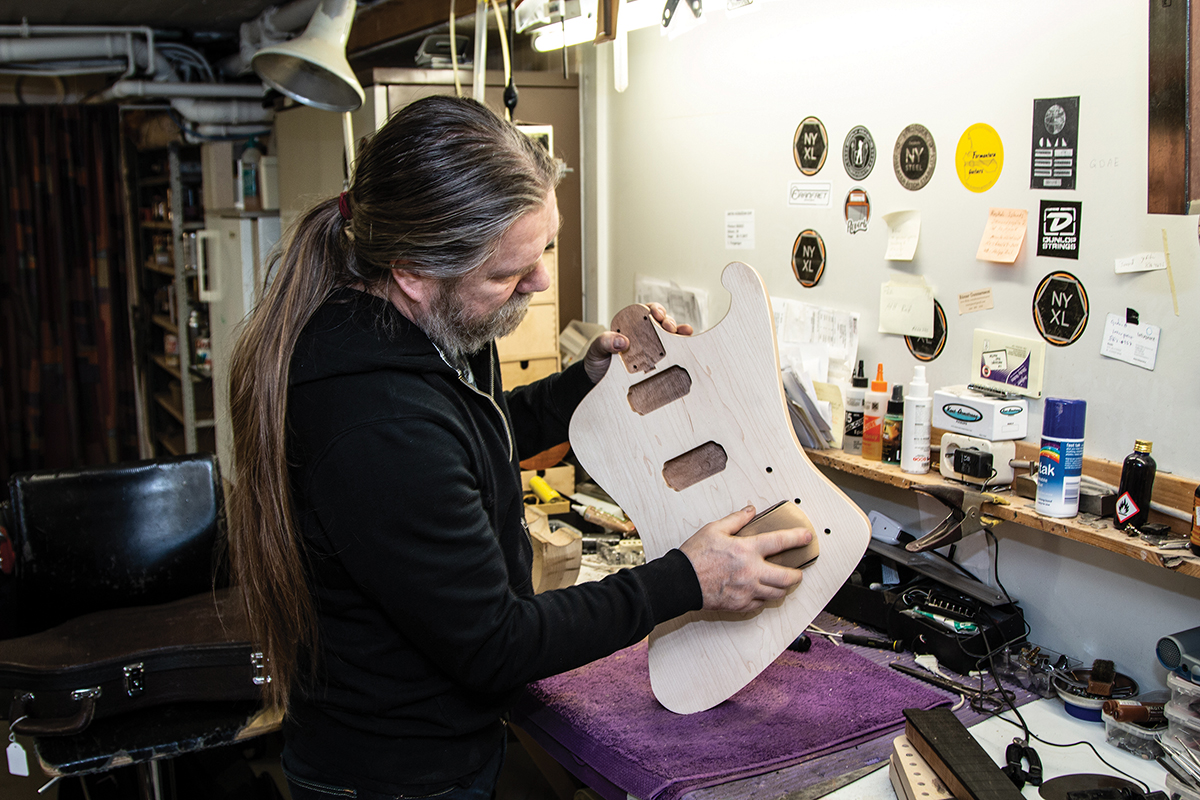 “The body is dipped in the hot water a specific number of times, it’s quite critical and has to be accurate to the second, so the wood doesn’t scorch. It can also be dangerous, as the water temperature exceeds 100 degrees Celsius. This takes place, of course, before any hardware is fitted. The hot water contains a lot of natural minerals including sulphur, and the mud from the springs is rubbed into the wood while the body is still wet. This is left to dry on the body for a few days, so the minerals can work on the wood. The mud residue is then gently removed, rubbed to enhance the old leather look and sealed with an oil finish.
“I have a supply of this mud in my workshop if I need to apply more, but I have to open the windows when I open the containers! As far as I know, it’s never been done before in guitar luthiery.”

Iceland’s volcanic landscape is a huge draw for tourists, of course, and the country has put it to good use by being a pioneer in the use of geothermal energy as well, but there have been few other practical uses for its by-products over the centuries – something that a young Gunnar often found frustrating.

“There have been very few constructive ideas for using the powers of Iceland’s hot springs,” he says. “Centuries ago, fishermen would lower their wooden barrels with iron hoops in the hot water. The iron hoops would shrink as they cooled and formed a tight seal around the barrels. I used to fish in the lake where the hot water drains when I was a kid, often wondering what could be done with all that wasted heat and water pressure!” 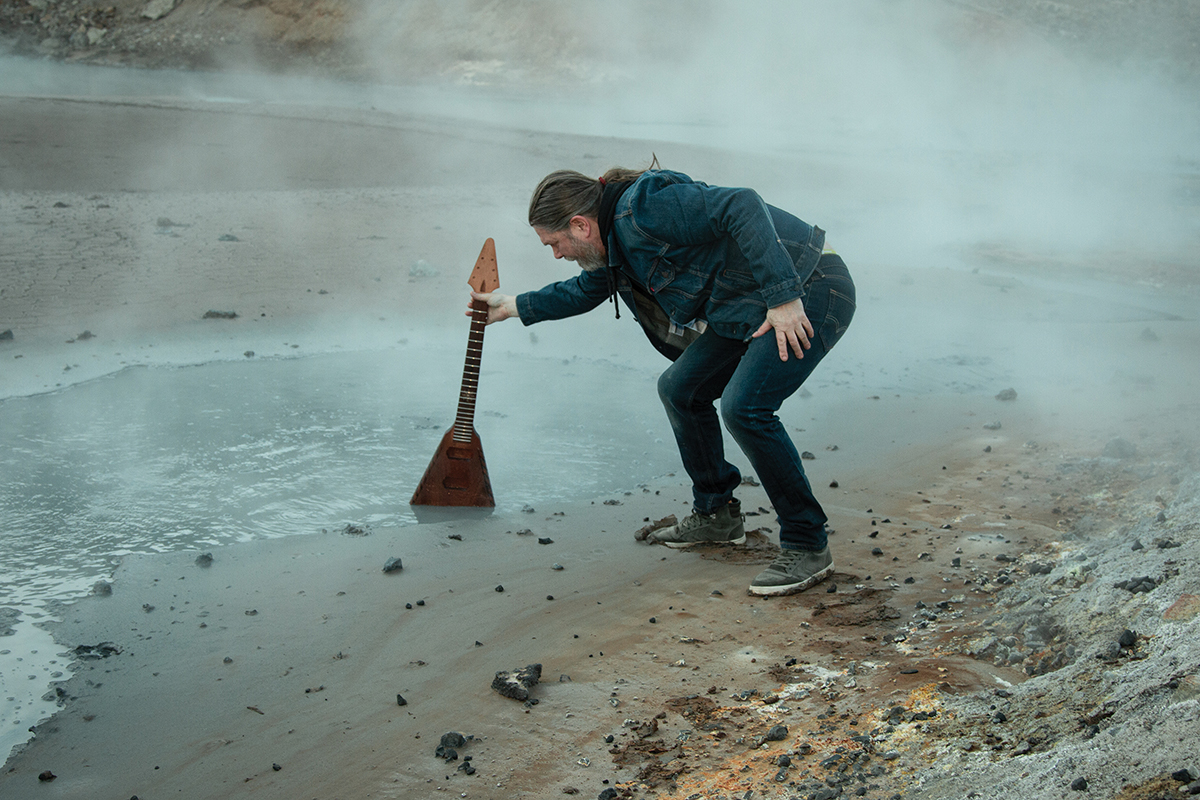 HAMMER OF THE GODS

Away from the unique finishes on the guitars, Gunnar has also sought to instil each of his guitars with aspects of his Viking heritage. The carved aluminium body plates on the guitars represent the Viking warrior’s armour, the tailpiece is shaped like the ‘Hammer Of God’, while at the other end an aluminium design on the face of the headstock represents the nose guard on a Viking helmet. They obviously look stunning, but it’s not just about the looks – as there are tonal implications, too.

“The combination of the aluminium and mahogany contributes to a sustain and a brightness that I’ve not heard before,” he enthuses. “The Yggdrasil V is a fine example. It’s named after Odin’s Tree Of Life, which also means ‘good wood’ and connects the nine worlds in Norse cosmology. It also has the ‘Helm Of Awe’ inlaid within the fretboard, which stands for the ‘Great Protector’ – one of the most mysterious and powerful symbols in Norse Mythology.”

Aesthetics aside, Gunnar has also been very selective when choosing pickup designs to enhance the tonal characteristics of the Viking Series guitars. “I’ve tried several pickup brands, as I wanted to preserve the natural harmonics and sustain of the Viking Series,” he explains. “I finally settled on a small company called Dominger, based in South Carolina, and also my own custom-wound Seymour Duncan humbuckers. I call them Volcano Mud, fittingly – they have a medium output with plenty of headroom, but they also clean up really well and enhance the lows and control the natural highs of the guitar’s construction. I didn’t want to go down the ‘hot’ route, where the trade off is a dark midrange tone with fewer highs. 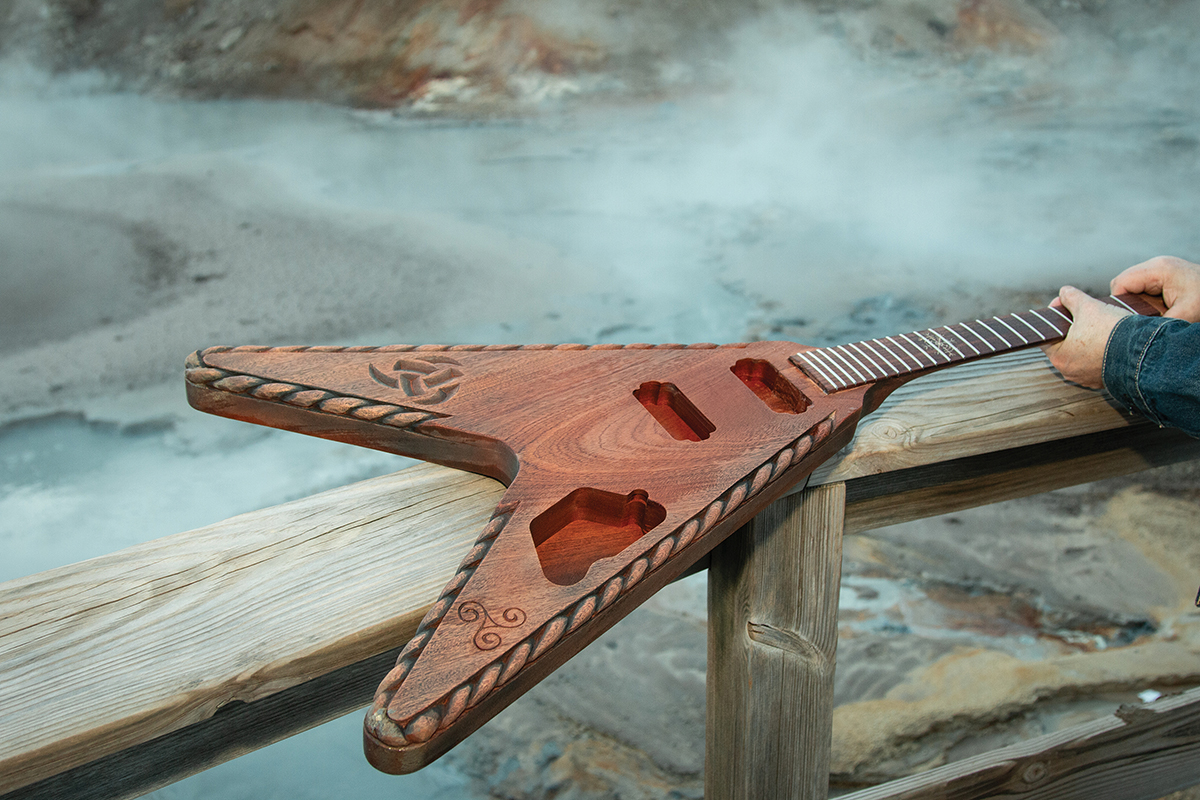 His fascination with pickups isn’t a recent development – in fact, these components were a gateway for Gunnar getting into building instruments of his own.

“I learned a lot about pickups when I was a kid,” he explains. “The next best thing for me after fishing in the lakes was to swap out pickups and rewire guitars and hook them up to old valve radios.”

Luthiery came later, but Gunnar is hugely passionate and serious about his craft, and brings a wealth of experience to each one he builds.

“I started to get serious as a luthier in 1996 and launched Orn Custom Guitars in 2000,” he explains. “The Viking Series guitars are totally hand-built, taking in hundreds of hours. I keep the same theme throughout, although each one is slightly different and individual, maybe with an all-aluminium body, for example. It’s a bit like nobody turning up to the party in the same suit! I have a basic band saw and router, but that’s it; the inlays, carving and sanding are all by hand, here, with my partner Ylja. She has a trained eye and a very skilful, hands-on approach.

“I’ve stopped using rosewood because of the CITES regulations, so all bodies are mahogany or walnut, both of which actually respond best to the dipping process. My necks are mahogany, with ebony fingerboards – which is naturally oily to the touch. I like that and, of course, it’s very dense and has excellent sustaining properties.” 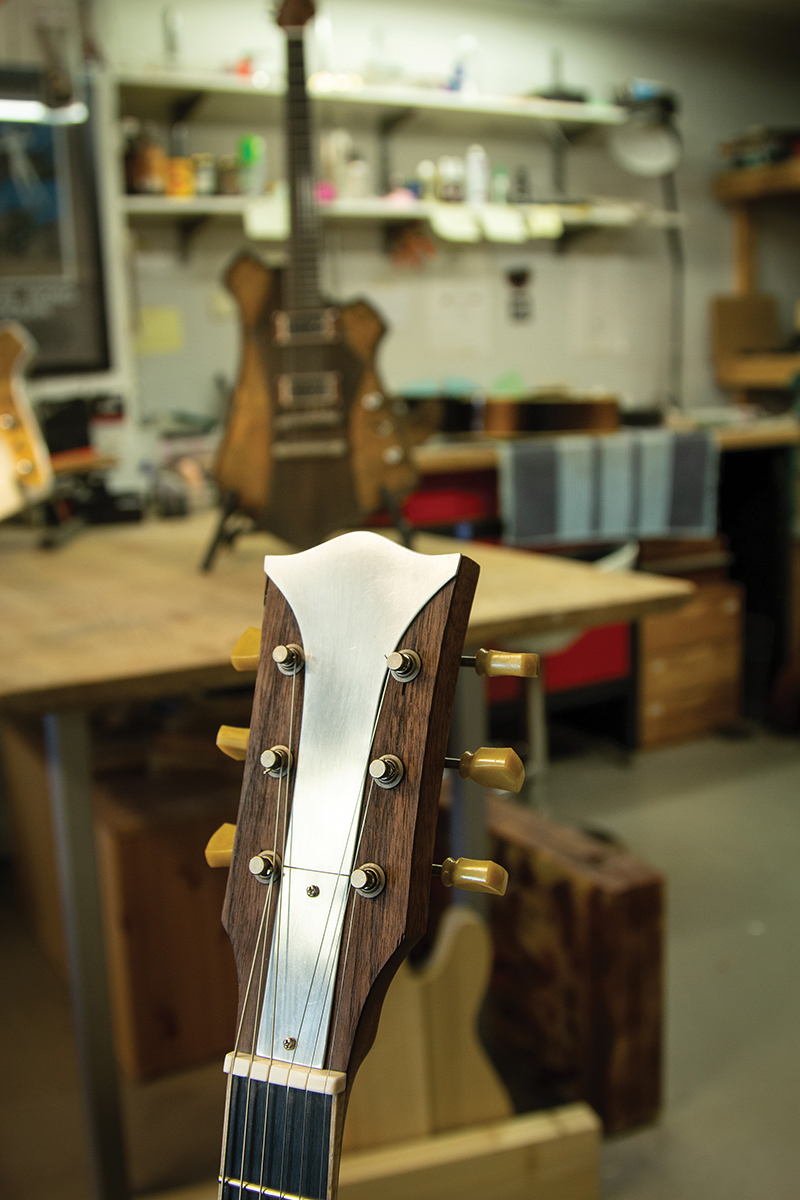 Iceland is a country of outstanding and unique natural beauty, but supplies of local wood are hard to come across, owing to both the near-arctic climate and widespread deforestation that occurred after the Vikings first arrived in 874 AD. This scarcity means that Gunnar has to look to more unconventional ways to source suitable tonewoods.
“I’m always on the lookout for interesting furniture that may appear in antique shops,” he says. “But apart from that, quality tonewood of any kind is more or less nonexistent here in Iceland, as we don’t have any forests to speak of. When people first settled here about 1,150 years ago, trees were plentiful, but they cut them all down to create pastures for the livestock they brought with them.

“We only really had one species of tree, which was birch. The sheep and cattle took a fancy to them; they ate all the seedlings so the trees couldn’t grow back. The birch trees we have here now are protected. So I have to scour the internet for the best tonewoods from the likes of the USA and Europe.” 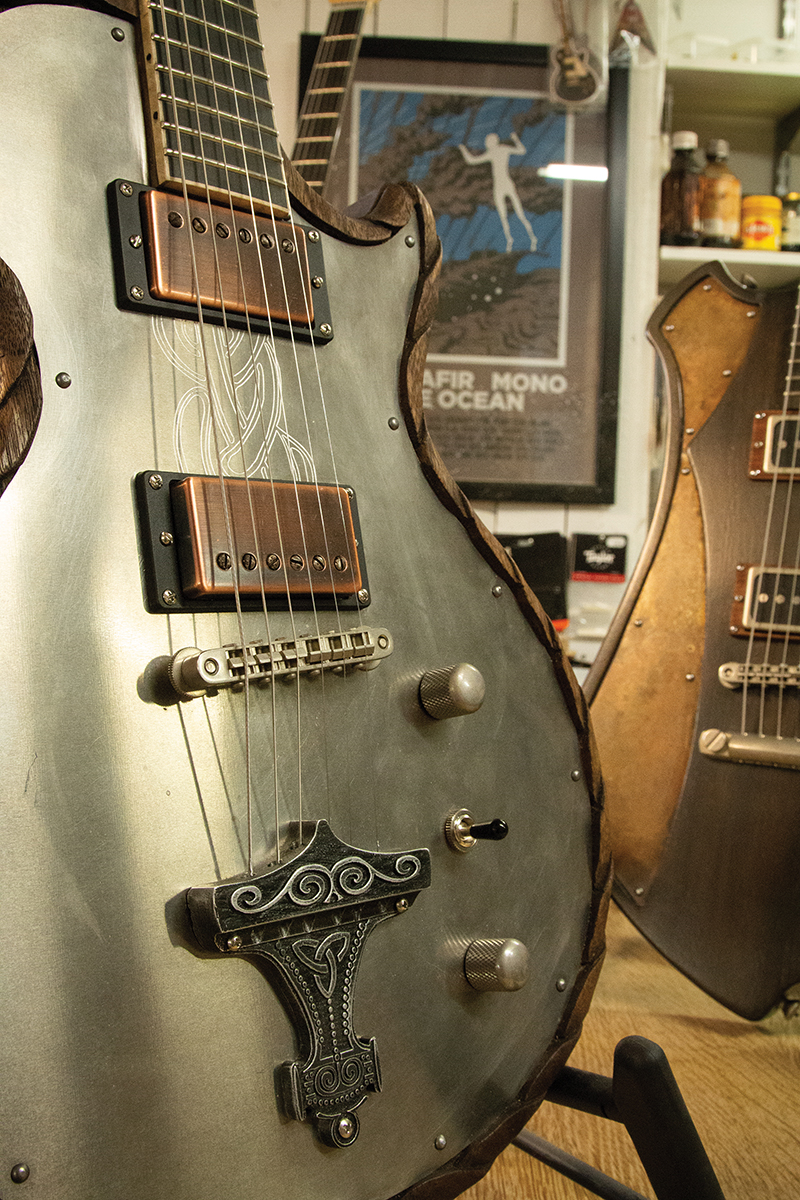 Despite the struggles involved in actually sourcing the raw materials with which to build his creations, Gunnar’s unique guitars are earning rave reviews both at home and farther afield.

“I’m very pleased how popular my guitars are,” he adds. “I was content in the past just to sell from my workshop here in Reykjavík, but having now built models for Iceland’s most popular bands, such as Sólstafir, The Vintage Caravan and Of Monsters And Men, work is plentiful, especially after attending overseas guitar shows like NAMM in the USA and The Holy Grail Guitar Show in Berlin.”

Indeed, the success of Orn Custom Guitars is a reflection of the huge arts scene that has developed in the small country. “Iceland has a very healthy music scene; everyone you speak to is either writing a book, or is in a band,” he chuckles. “I have my own band here called Strákarnir Hans Sævars, which has had the same line-up for 20 years. There are so many bands, covering all genres of music, although I would say rock leads the way. 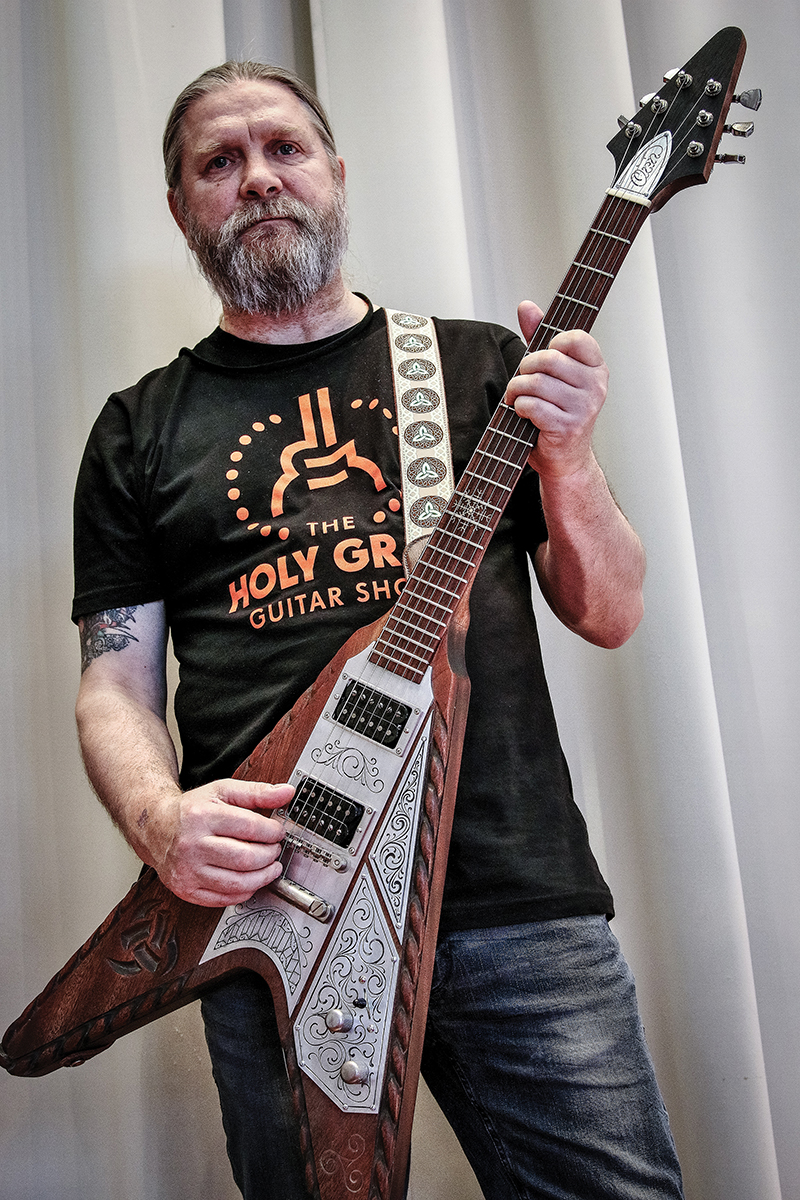 “It’s amazing really, as the population of the island is fewer than 338,000 – no more than a small city in the UK!” However, while the bands are plentiful, the Icelandic climate can be a treacherous one for guitar owners, and it means that Gunnar also gets a lot of work on the side.

“It can be cold, of course, but the problem the guitars have is not so much Iceland’s colder weather or the humidity,” he explains. “It’s actually that because our houses are so well insulated for the winter months, it’s very common for acoustic guitars to develop cracks.
“I also have a repair shop where Ylja works flat out repairing cracked soundboards or bindings that have dried and come away from the body. We can handle just about any job that comes through the door: refrets and rewiring are everyday, snapped headstocks are also pretty common – there are some crazy players in Iceland! I did hear a story about a guy who filled up his Martin acoustic with water as it had dried out over the winter period. I’m not sure if that’s true, it may have been an Icelandic myth; I do have a feeling it’s true, though!” 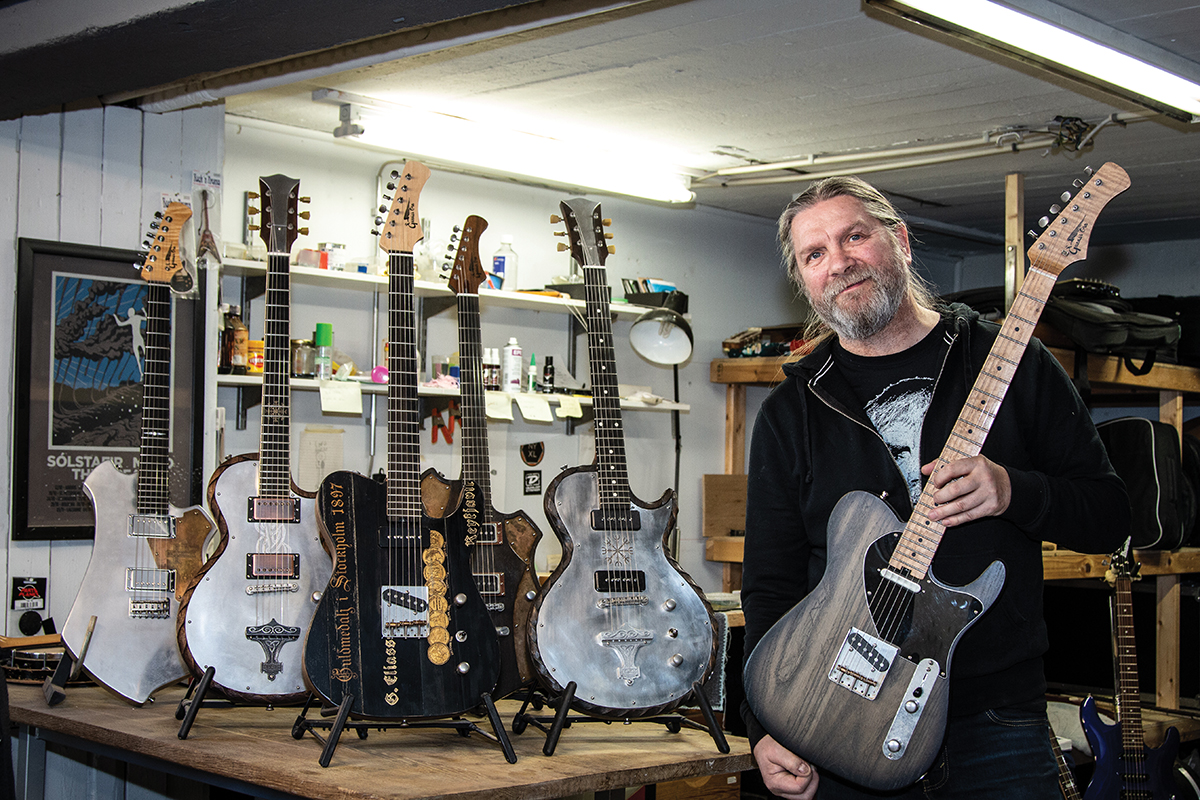 One of the most rewarding aspects of Gunnar’s work at Orn Custom Guitars, however, is passing his wisdom on, and since 2007, he’s also spent time teaching guitar-building classes at the Technical College of Reykjavíc. “It’s very rewarding and fulfilling to see students start with a blank canvas and three months later, leave with a guitar in their hands,” he tells us, as our chat draws to a close.

“Sometimes it can be quite emotional for them, as they didn’t realise that they had this ability within them. A few of my students have asked if they could try and build one of my Viking Series guitars, but I have to say no… I wouldn’t want to lose any of them in the hot springs!”