Pendulum guitarist Peredur ap Gwynedd debuted the new Line 6 Helix in front of a gigantic festival crowd of 165,000 fans – plus a staggering 30 million more online. No pressure, then… 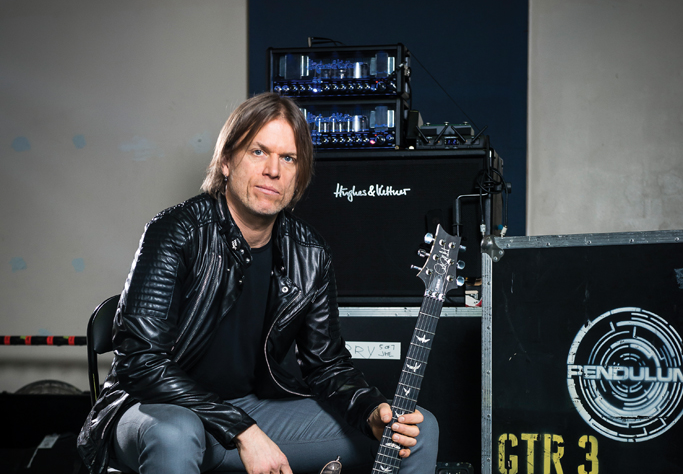 The Ultra Music Festival took place in Miami in March and saw the triumphant return to the live stage of electro-rockers Pendulum after a four-year hiatus. As well as the 165,000 fans in attendance, Pendulum’s closing headline set reached 30 million viewers via a live internet stream and the global level of interest was such that the band’s name was the eighth highest-trending hashtag on Twitter.

It’s fair to say that the pressure was on for Pendulum’s long-serving guitarist Peredur ap Gwynedd, and it was at this colossal show that he chose to debut a brand-new live rig, with the new Line 6 Helix floor-effects processor functioning as its hub. As road tests go, this wasn’t exactly a Battle Of The Bands at the Red Lion on a Tuesday night and here, exclusively for G&B, Perry talks us through his journey with the Helix from rehearsal room to festival stage. 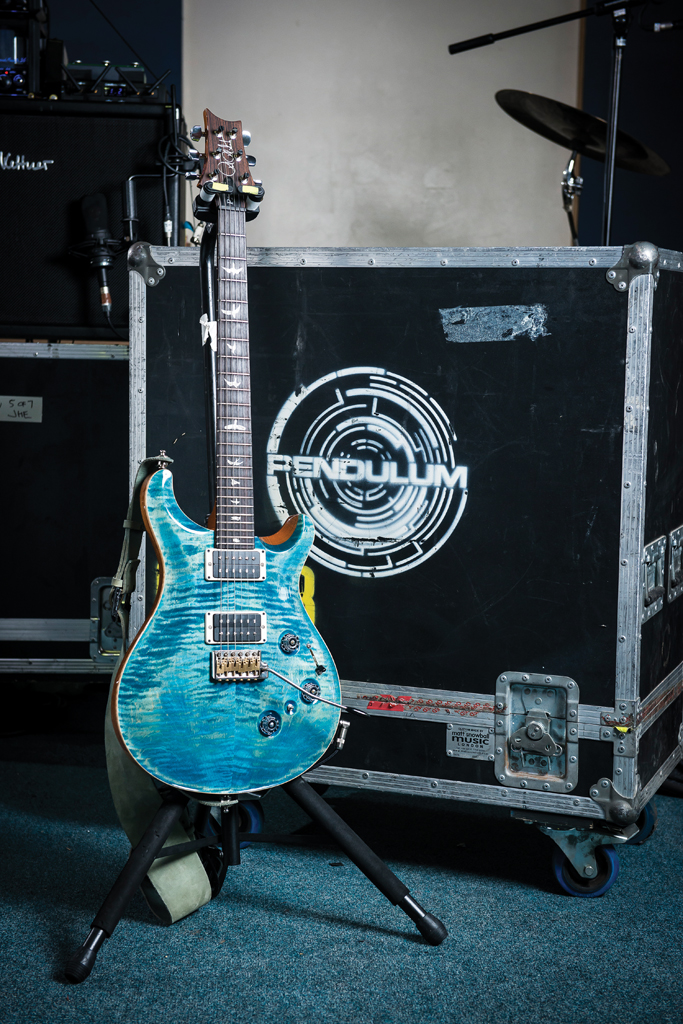 “Previously with Pendulum, I was using the Hughes & Kettner TriAmp with a TC Electronic G-System. With Pendulum, I’ve always split my signal into an amp to get the valve sound and also into some sort of modelling. We used to run various modelling and synthetic amp simulations into the Muse Research Receptor; it’s basically a rackmount computer that runs plug-ins natively. So bang in the middle, you get a proper valve-amp sound and either side, you get a synthetic sound. It fits in with the type of music Pendulum does – much of which is quite synthetic and generated from soft-synths and various synthesisers.

“You have to mix the guitar sound in with those type of sounds. Just an amp sound on its own kind of works, but you need something else as well to make it sound less rootsy. Even though I do love playing guitar straight in with no effects at all, for this situation, that’s what helps. And I’m the only guitarist in the band, so I need a bit more of a spread. So that’s what the old setup was.

“When Pendulum went on hiatus about four years ago, I started using a Hughes & Kettner GrandMeister 36. That’s got some very basic delays and reverbs and modulations built in and I’d been using it on its own, basically, when I’ve been doing other things. I’ve been playing with Faithless for the last two years. With Faithless, all we needed was the one amp sound with a bit of delay in it. It’s a lot more organic, and that’s fantastic. But then we decided to restart the whole Pendulum thing and I had to think again!” 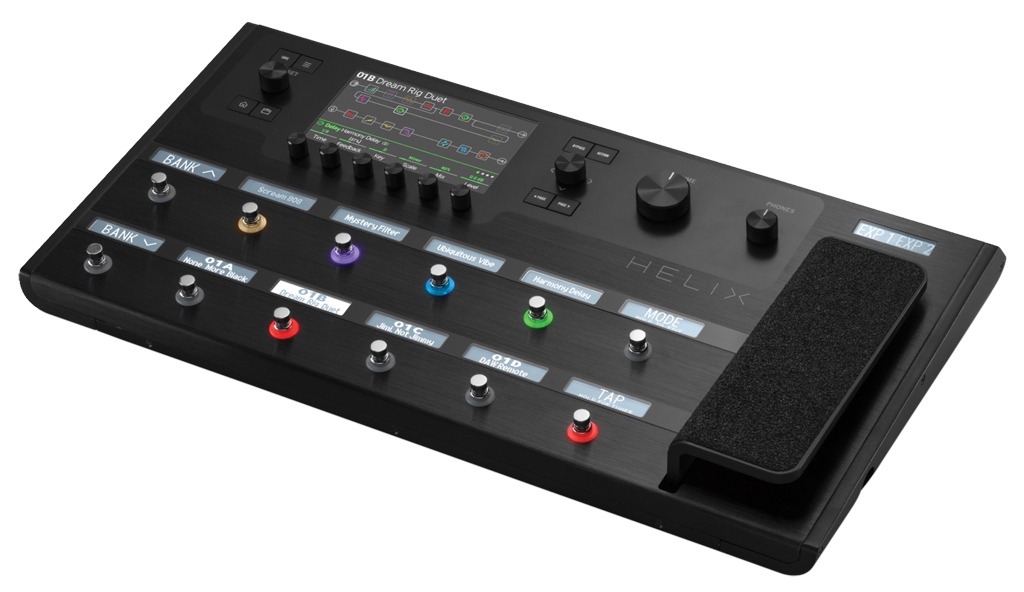 “Rob Chapman and Lee Anderton featured the Helix on YouTube sometime last year and I thought, this is perfect. The main thing about it was the multiple inputs, and multiple outputs. I’ve never seen a floor effects unit that does that. The whole way the Helix is set up is exactly the way I wanted my rig to be set up a few years ago, before Pendulum went on hiatus. The hope was that this would sort it all out for me.” 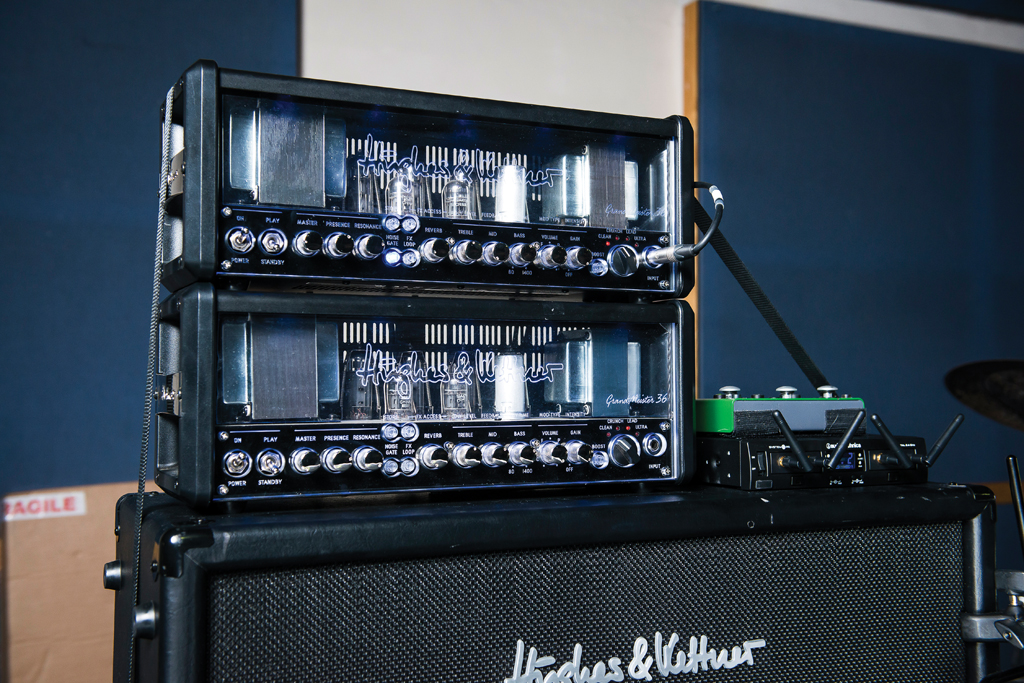 “Basically, I’m running a GrandMeister 36 to get that valve-amp sound and I actually prefer it to the TriAmp. Even though it’s a smaller amp, it sounds bigger, for some reason. It’s got EL84s and I think it’s the compression that makes it sound bigger at a lower volume.

“I run it at 18 watts even on massive stages. You get that little bit more compression, but it’s still very loud. The whole point of those big stacks back in the 60s was because you only had a vocal PA; you needed a loud guitar amp to compete. Those stacks were the PA for the guitar. The GrandMeister works perfectly at 18 watts with Faithless and with Pendulum.

“My guitar is a PRS P24, so I’ve got two outputs. You’ve got the magnetic pickups and the piezo. I run the magnetic pickups into the Helix, then that gets split inside it; one output goes to the guitar amp, the other into the modelling side. We like this big, super-stereo guitar sound, and whichever modelled amp I’m running into gets split after the amp into a stereo delay. One side is dry, the other has a 25-millisecond delay. Then I put a stereo delay on top of that for certain songs!”

“Usually, I change sounds on a track-by-track basis. The two heavy-sounding amplifier models in the Helix I gravitated towards were the Boogie Rectifier model [Cali Rectifire] for the main distortion and one of the Brit Plexi ones for the less distorted sound. As soon as I got the Helix, we were in rehearsals, I had to dial up a sound straight away. You know how it happens, you find a good sound and you mess around with it. 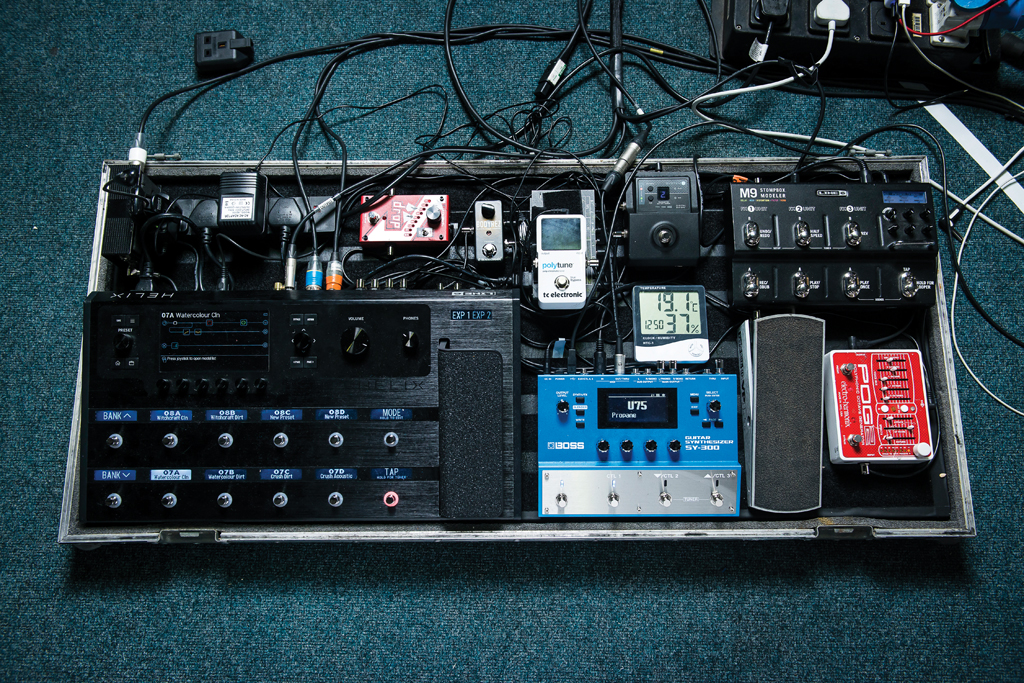 “Then I’m using the Divided By Thirteen [Divided Duo] model for more of a crunch sound; then for hyper-clean, the Twin Reverb [US Double]. Those are the four main amp models that I use; they work pretty well. Out of the front of house, the audience are listening to a stereo mix of those models with the Hughes & Kettner blended in. I’ve got in-ear monitoring onstage.

“When I’m just playing the guitar without anyone else playing, it’s quite a nice little world that I live in! It’s not just left, right and middle; it’s a very three-dimensional type of sound. It doesn’t quite swirl around your head, but there’s a massive sense of space in these lush guitar sounds.

“I’ve got the best of both worlds, because I’ve got the amp onstage. I’ve never gone the whole hog and gone with just modelling – I’ve always mixed the two. It works better like that for me. I like that organic feeling of a guitar in front of an amplifier, but I also like what the modelling stuff does as well.

“With the effects inside the Helix, I use some Whammy pedal [Pitch Wham]. I was always using a Whammy pedal in the Pendulum set and that’s in there already. And also the wah-wah. You’ve got various types, but it’s always the Cry Baby model for me. It was the first wah I bought when I was a kid, an Italian one from a shop in Camarthen.” 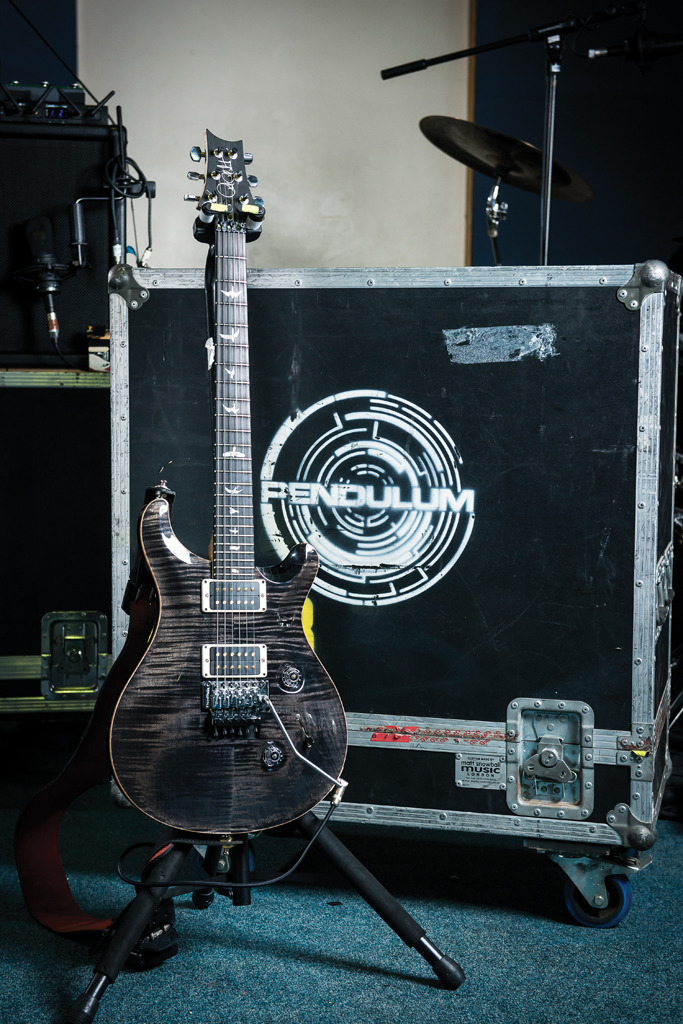 “Setting up the Helix and integrating the other pedals was quite straightforward. The one problem I’ve always had with any pedalboard rig is earth hum, especially if you are splitting signals, but with this I didn’t have any problem whatsoever, which was quite astounding, really, especially as I was using all of the effects loops on the Helix and various power sources. The signal was totally clean, it really shocked me.

“When we went to Miami for production rehearsals – the power in the states is notoriously bad, it’s quite dirty power. Even when you switch on a hotel lamp the television screen goes a little bit dimmer! But taking it to the US and plugging it in and playing it for the first time was the first proper test, and again, it was totally clean. That is a massive plus point for me.”

“I ran out of effects loops really quickly, so a couple of pedals – the Line 6 M9 and EHX POG – are running in series. In a perfect world, instead of having four FX loops in the Helix, I’d have six. The Boss SY-300 Guitar Synthesizer, which I use as a pad, is in stereo so it uses up two, basically. 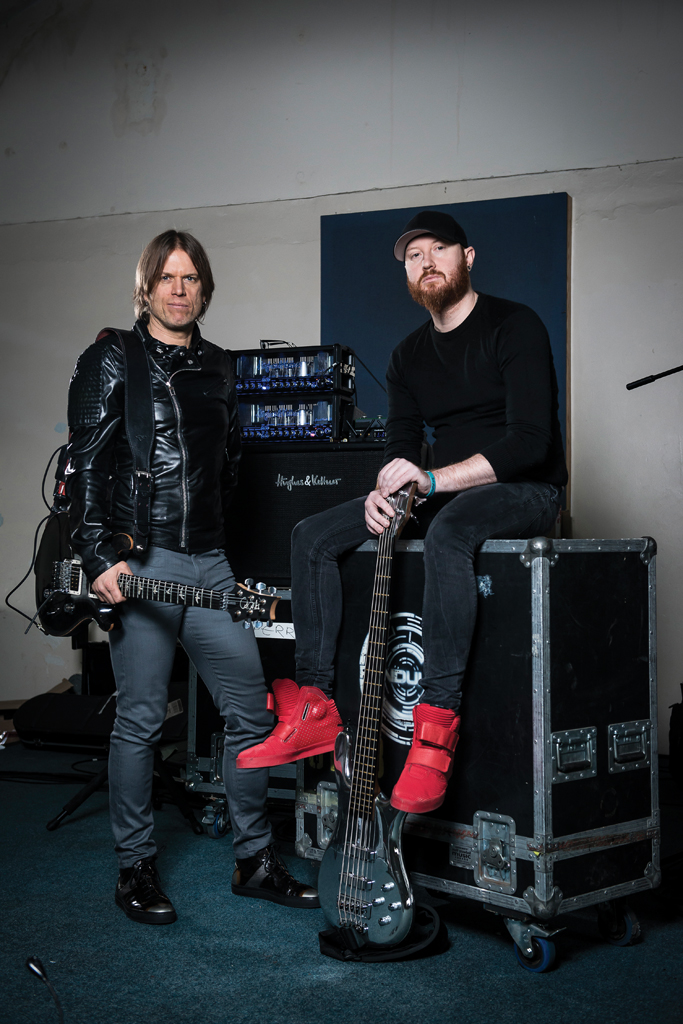 “The piezo signal from the PRS runs into a separate Audio Technica System 10 wireless unit, into the TC Electronic BodyRez and the auxiliary input of the Helix and that’s got a separate out, so the front-of-house guy has control of the acoustic guitar sound on its own if he wants it. It could be mixed in if I want it to, but I prefer it separate, as it adds to the whole 3D nature of the sound. But as a workstation, the Helix is fantastic for integrating all that stuff. It’s bloody great.”

“Basically, everything has been miniaturised. My new rig is about 10 per cent of the size that it used to be, which is quite amazing. I’m using one 2×12 instead of two 4x12s, as well. But it sounds bigger, and is more controllable, which is nuts.

“Now I’ve got more control myself. Back in the old days, the Receptor wasn’t in my world, it was over in the MIDI world, and a MIDI tech was looking after all that stuff. I was running leads across the stage into the Receptor, so I had no control over it at the front of the stage whatsoever. Thanks to the Helix, now I’ve got total control of all the sounds, on my pedalboard. You can control the GrandMeister with MIDI as well, so for me, it’s kind of a dream come true, really.”