The former Iron Maiden guitarist is a veteran blues-rock player who has been in a plethora of bands. Lars Mullen takes a look at his collection… 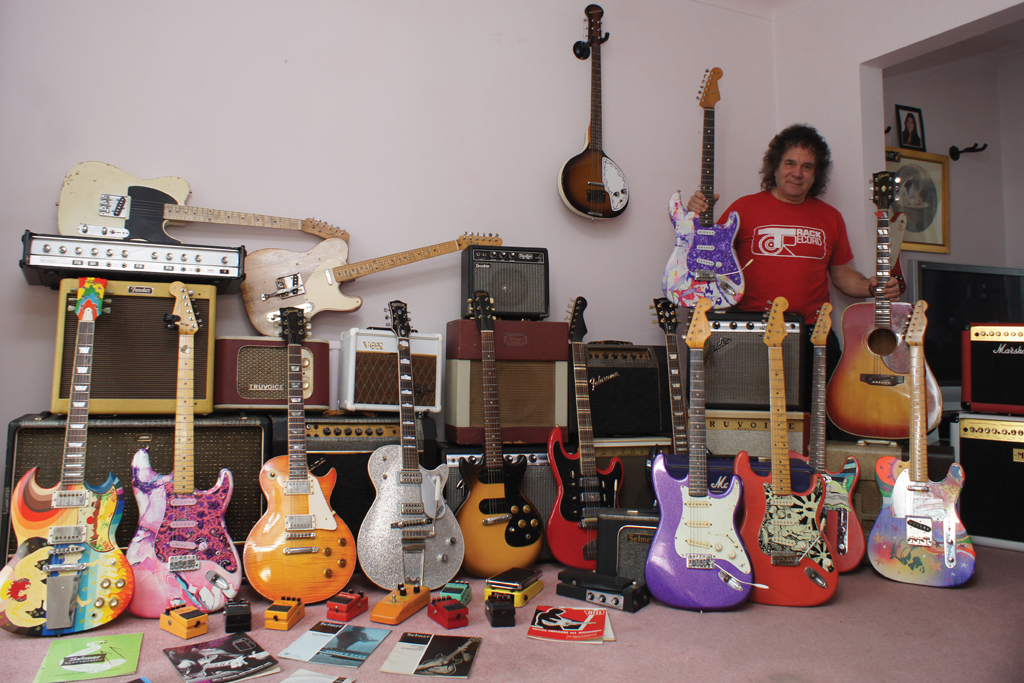 “There have been a few,” laughs former Iron Maiden guitarist Bob Sawyer when asked how many bands he’s been in. “I’ve just finished compiling a book which includes a lot of unseen photos of my time in Iron Maiden from December ’76 to July ’77, and in Praying Mantis, so I’m on the look-out for a publisher.

“I’m not afraid to say my feet are cemented between ’66 and ’75, I feel proud to have been part of that era. Growing up in Enfield in North London, I was the right age to see all the great bands, some in their infancy, like King Crimson, Pink Floyd, Gravy Train, May Blitz, Man, The Pretty Things, The Pink Fairies and Trapeze. Oh, yes, and Rory Gallagher in Taste, Jethro Tull, John Mayall and Led Zeppelin for the equivalent of 27.5p!

“When I was 15, I was gigging flat-out in youth bands, playing all the mod material from bands like The Who, The Small Faces and Geno Washington. I went to the gig Sid Bishop talked about in Guitar & Bass [November, 2015], where his band The Deviants played with Steamhammer and Timebox at Enfield Technical College in January ’69. The Enfield Town mob wanted to beat up the hippy bands.

“Iron Maiden were booked to play The Roxy in March ’77, which was a big punk stronghold – luckily the gig didn’t come off. The punks wouldn’t have accepted us, and if they had started spitting at us, it would have got nasty. We were just cocky young upstarts at the time, gigging furiously in London’s East End right in the face of punk.

“I was lucky enough to buy a Coral Pink 60s Strat back then, from Top Gear in Denmark Street, where Sid Bishop worked. I can see him now looking very much the rock star with long hair, leather trousers and red velvet jacket! 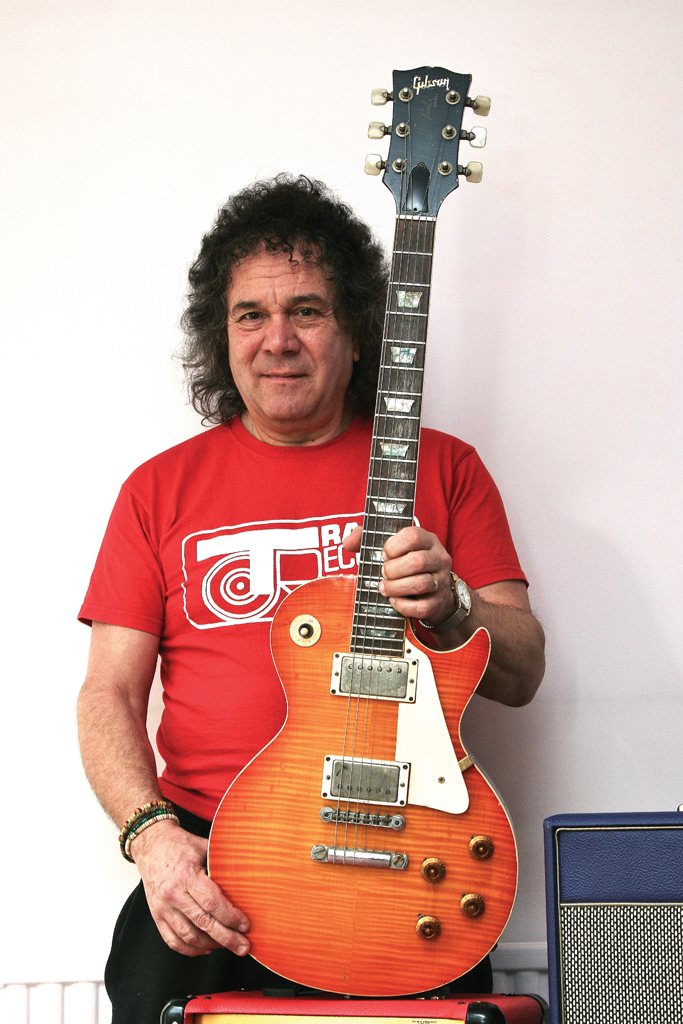 Sawyer with his 1972 Gibson Les Paul

“I chopped in the Strat, though, at the Orange guitar shop in New Compton Street for 90 quid, added another 90 and got a ’72 Gibson Les Paul, which I still have now. It was one of the first reissues and started life as a Goldtop with P-90s. I loved it, but it was only halfway to what I really wanted, which was a flametop – which you couldn’t find then. So I had it retopped, which cost 400 quid, far more than it was worth. It plays itself and has been with me in so many bands since, including Iron Maiden, Slow Motion, Nitro Blues, Weapon and Praying Mantis.

“Whilst we are on the Les Paul track, my Gretsch Silver Jet, I can honestly say, is the best Les Paul I’ve ever owned! On paper, it shouldn’t work, but the warmth and output from the Filter’Tron pickups far outweighs the Les Paul. The neck pickup is instant Paul Kossoff, especially through my Fender Blues Junior or any of the Marshalls dotted around here, even the transistor models like the MG100DFX combo, which are reliable and sound so good, and the little practice models in red and purple. It’s the colour – colour does it for me every time. 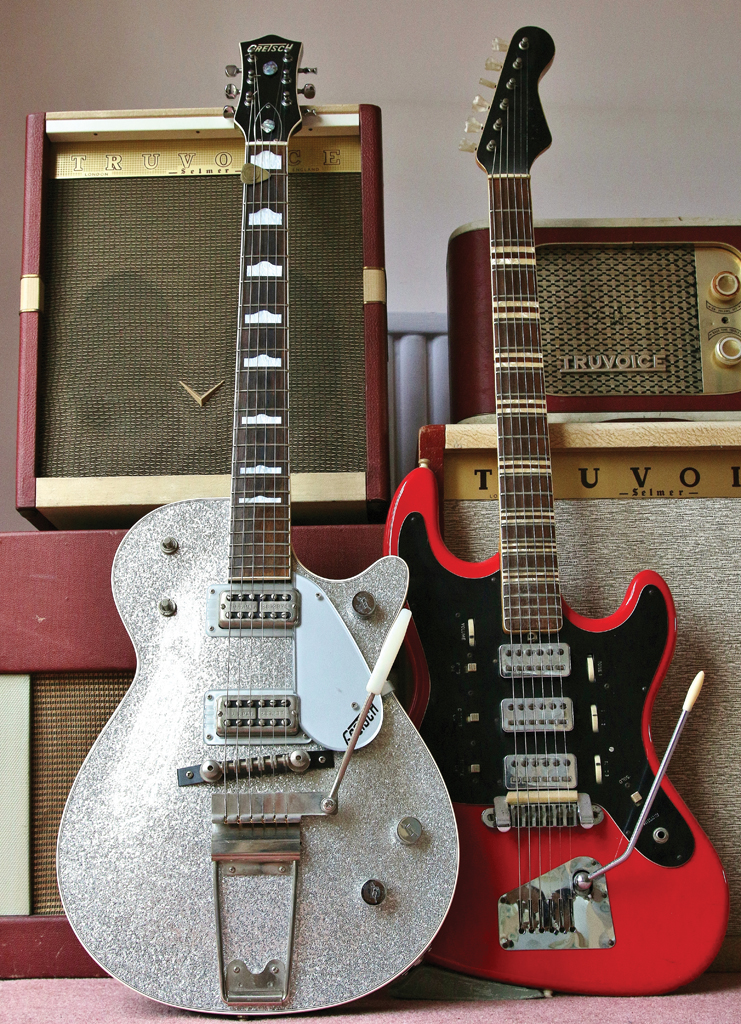 “Maybe I need to explain, whilst I have a hard-rock blues reputation, I’m also a total fan of all the prog-rock and psychedelic bands from the late 60s and early 70s. Heaven for me is being locked in my studio with a liquid light projector running, playing guitar with an Ebow whilst hooked up to loopers and echo boxes. I’ve just released an ambient soundscape album called Astronomie, which is quite a departure from the rock ’n’ blues that I play live.”

Bob turns next to a series of guitars fitting perfectly within this art-based musical culture. 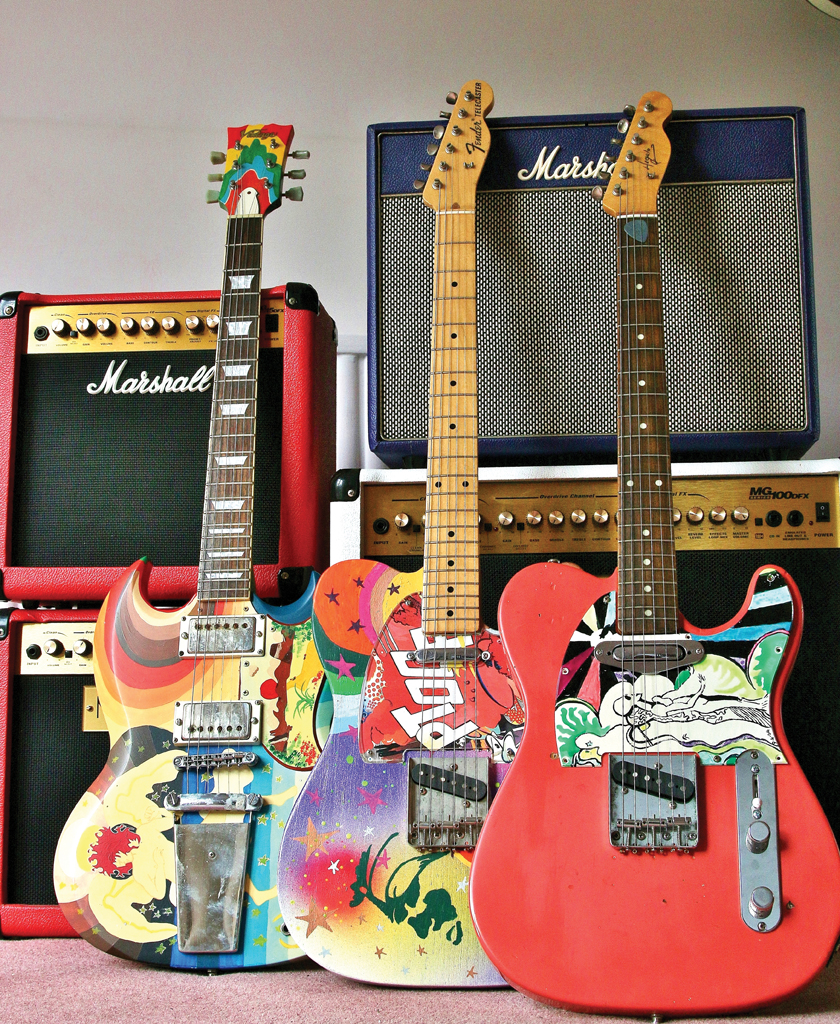 “Well, like I mentioned, it’s colours that do it for me,” he says. “It started when I first saw Eric Clapton on the front cover of Beat Instrumental magazine in October ’67, when I was 15. He had his big haircut, buckskin jacket and that amazing, painted SG ‘Fool’ guitar. I was so besotted with that guitar that I didn’t know if I was going for a shit or a haircut. I dreamt for years of owning a similar model, I have an excellent model that echoes all the colourful details made by Vintage, which I play in my band, called Firebird Seven. 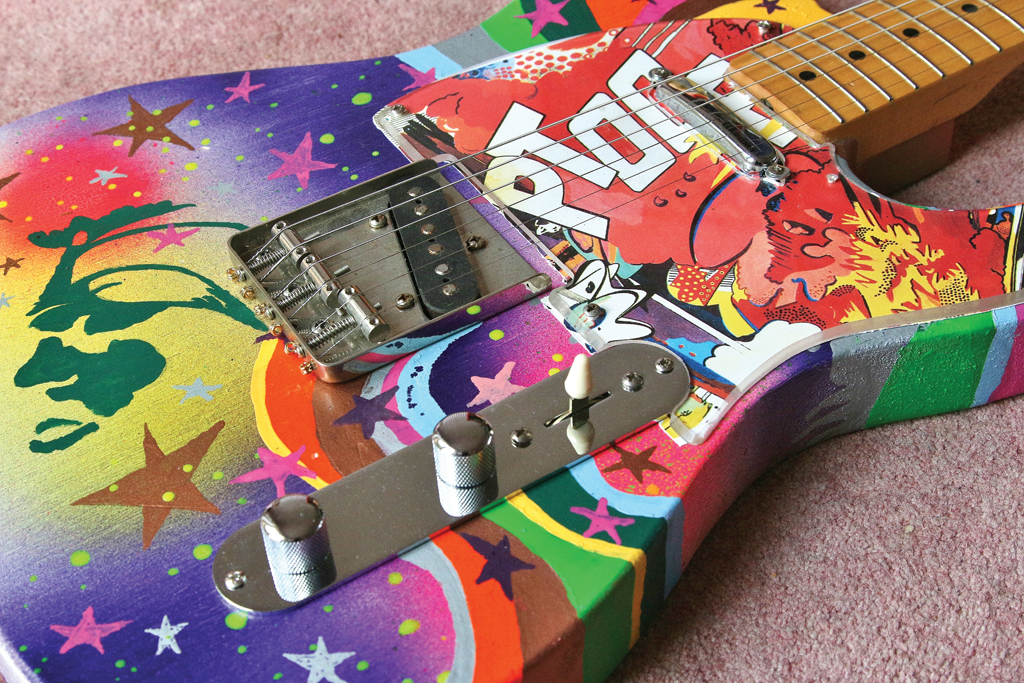 “So it was all an inspiration to harken back to those years with my own customised artwork here. Two of my Teles, for example, have tasted my dab hand with a brush; the body art on the one with the maple neck is my own design, while the scratchplate is painted from the PTOOF album by the Deviants, which Sid Bishop is on; while the design on the Fiesta Red Tele scratchplate is inspired by the Pretty Things’ 1968 album S.F. Sorrow.

“I still can visualise the psychedelic period as if it was yesterday, especially The Pink Fairies and the Hawkwind Christmas party at the Roundhouse in London, December ’70. They had white sheets draped from the ceiling with dozens of liquid light ‘blob’ shows projected over the walls.”

“You didn’t need drugs,” laughs Bob, “it just blew you away. The Pink Fairies were mercilessly loud, with both guitar players using double Simms Watts 200-watt stacks flat-out through an Echoplex, which doubled it all up – and they had two drummers. 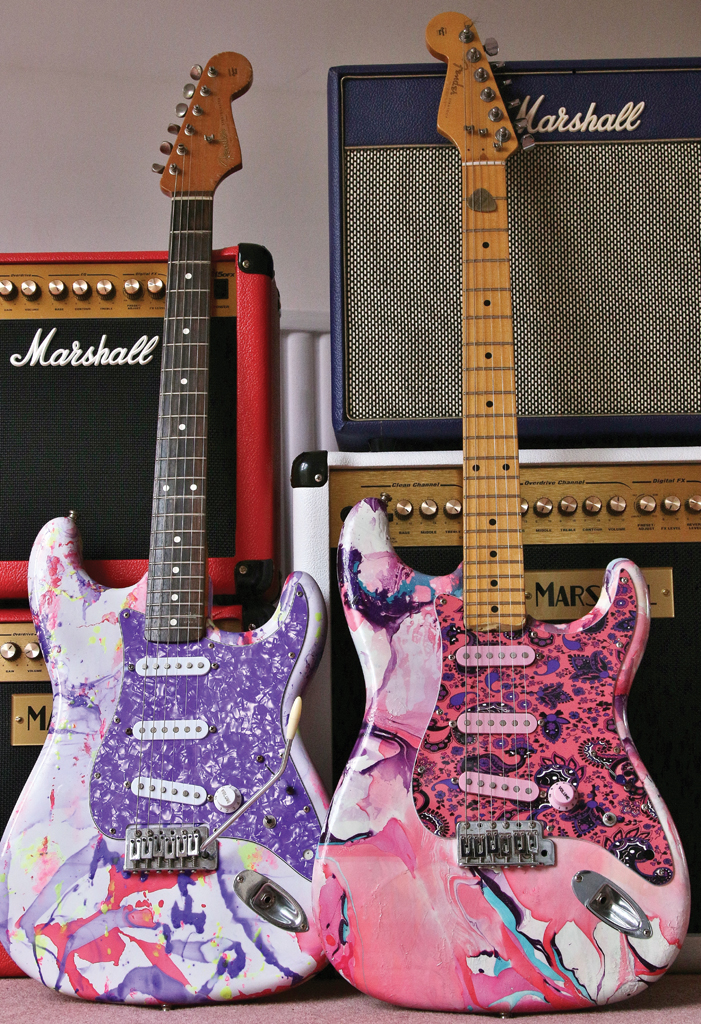 “Staying with vibrant-coloured guitars for a moment, the finishes on two of my Strats are unique, as they have been dipped. I did it myself. It’s quite easy, you just need a dustbin full of water, swirl lots of coloured oil-based paint on the top of the water, and plunge the body in and slowly back out. There’s a little bit of technique involved but you have your own unique finish, as no two are the same. These are great stage guitars.”

Looking up close, we spot a mini toggle switch in the Strat’s scratchplates. “Ah yes, that is such a simple but ingenious Strat mod,” says Sawyer. “The mini toggle brings in the middle pickup with either the neck or bridge pickup for some awesome fat Strat tones. I’m pretty handy with a soldering iron, so it’s an easy mod. I’ve modified a lot of my guitars and added a few unique, yet simple versions of some of the more intricate designs out there. I’ve fitted my own B-Bender to a partscaster T-type made out of a fork from the wife’s best dinner service – now she’ll know where it went! It’s so simple, yet it works perfectly. 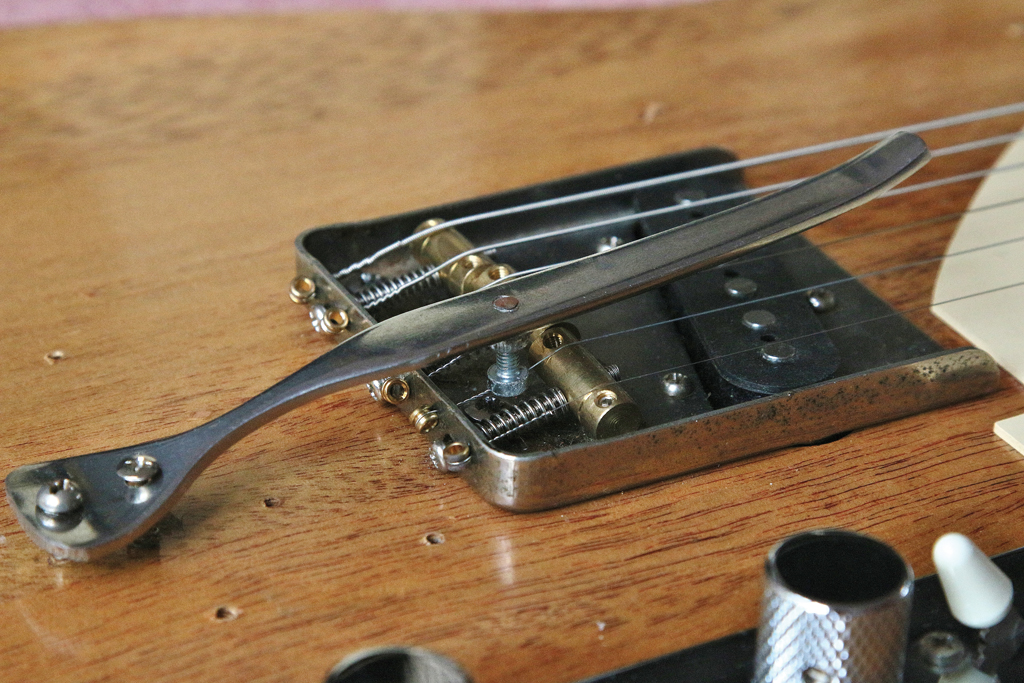 Improvised B-Bender made from a fork

“One of my first encounters with a Tele live was seeing Roy Buchanan on the same bill as a load of hairy Les Paul players with rows of stacks. Roy came on with a Tele and a little baby Fender amp, leaned into the amp and got this amazing sustain and pinched harmonics. All the players were in the wings watching with their tongues on the floor. It was a masterclass in technique and good taste.” 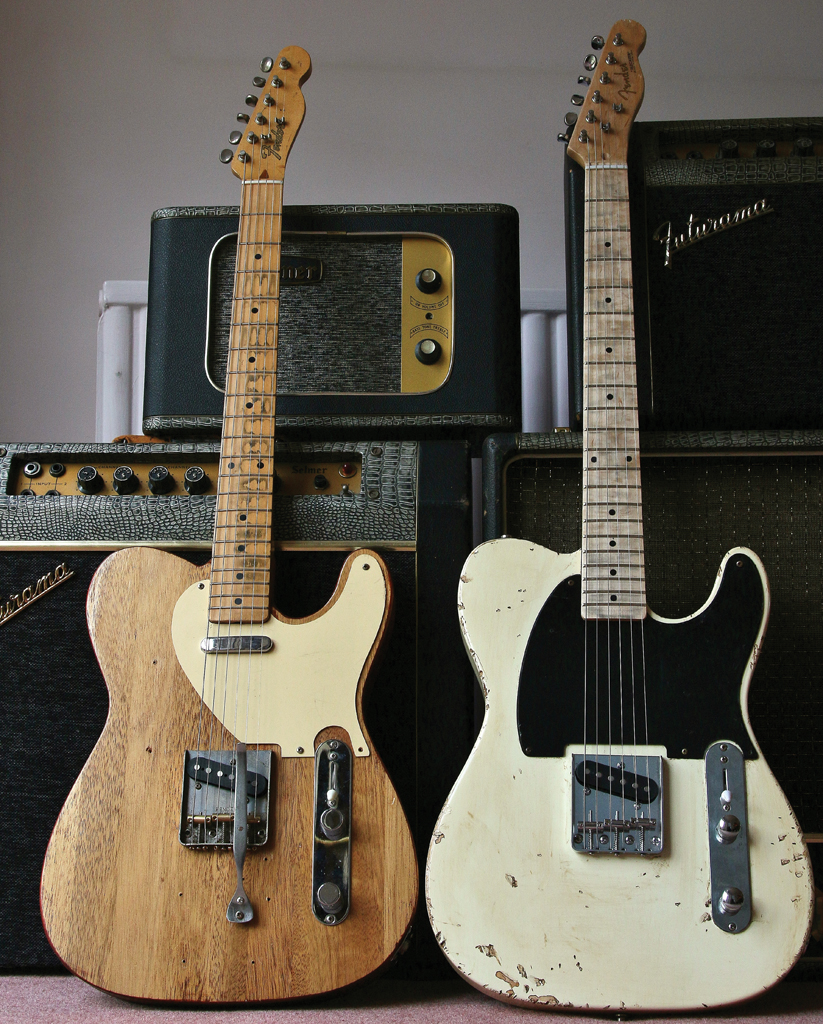 Sawyer is also a Gibson SG fan, but they have to be of a certain pedigree. “I have a black reissue Gibson SG, which for me ticks all the boxes for every reason you should love an SG,” he says. “My fetish is for the Series 1 SG, nothing else will do. None of those double-sided big scratchplate jobs, it has to be Series 1 all the way, which includes the body chamfering with the narrow horns… nothing else will do, trainspotting doesn’t come near it! 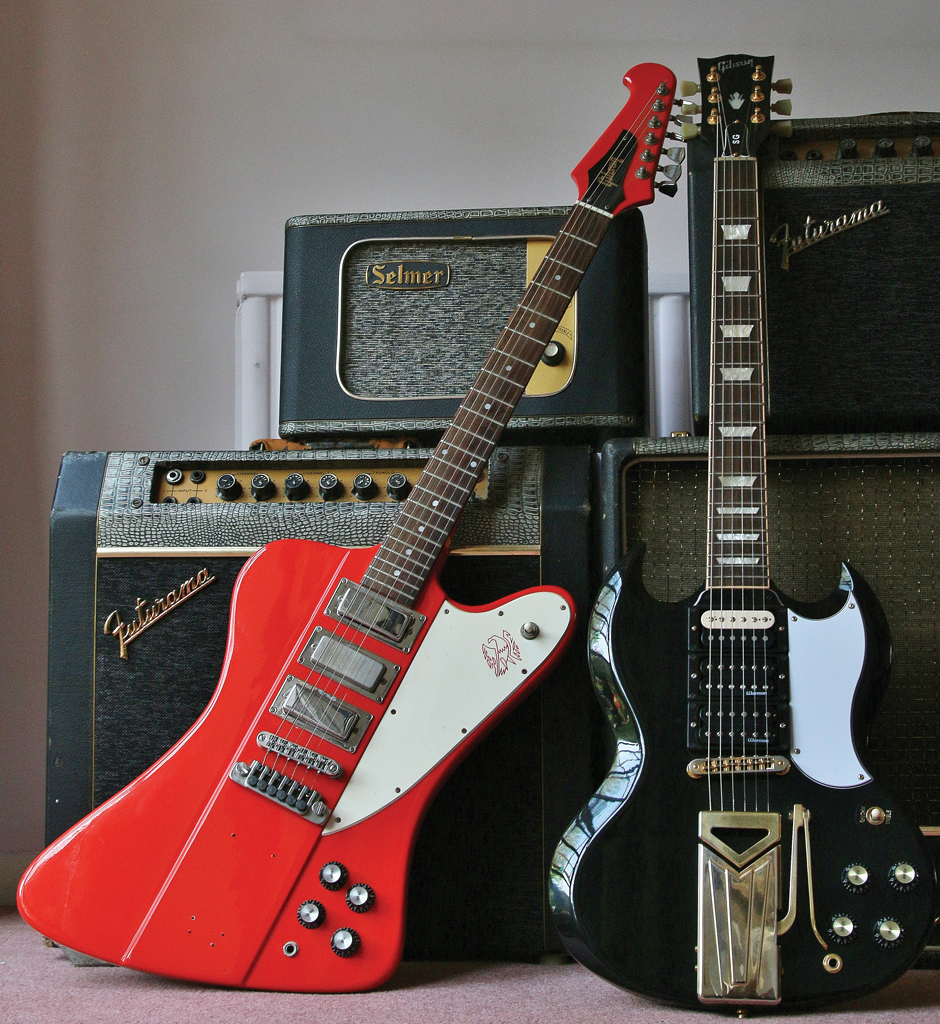 “I’ve replaced the ‘57 Special humbuckers with Warman units, which have a more punchy midrange and a beefy 14k output. It also has the old-style Portuguese ‘hand-pump’ side-action Vibrola. I love a Vibrola, I really think they are one of the unsung vibrato designs. I’ve even replaced the Bigsby with one on my 2009 Gibson 335, which I gig a lot, hence the gold is wearing off pretty fast. 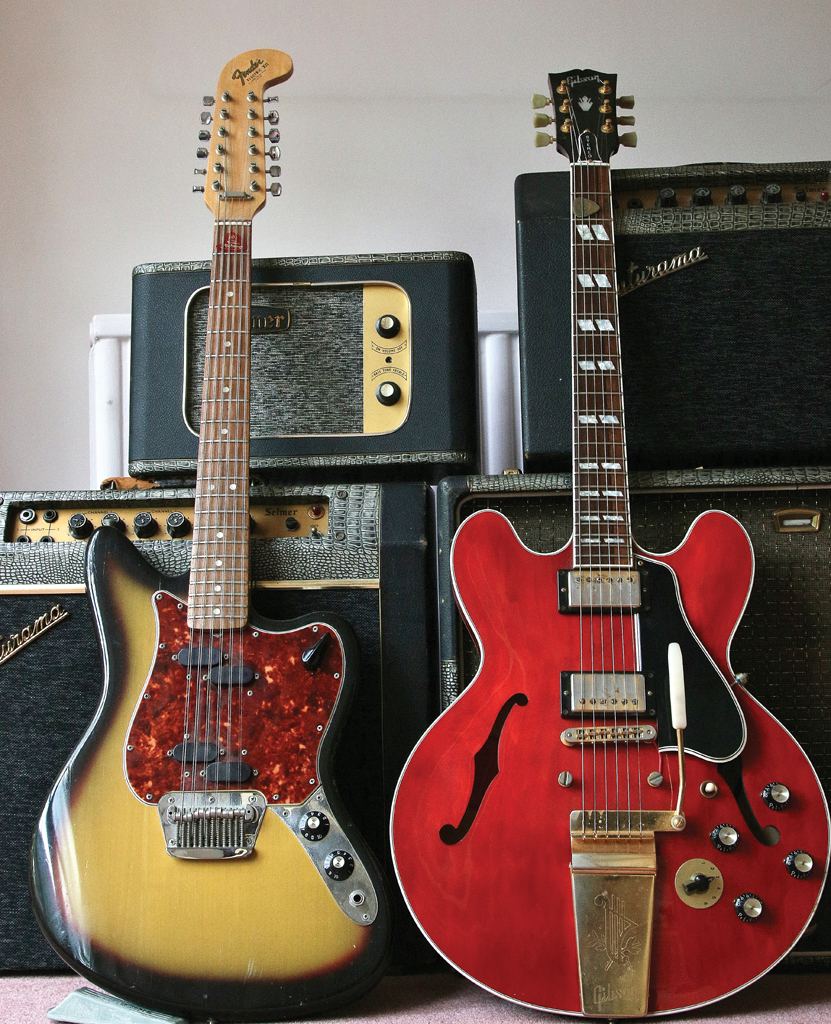 “I like that, I like a guitar to look like lived in. I don’t think you can beat up a Tele or a Strat enough, though, it just works on a Fender, unlike a Gibson, Gretsch or PRS. I’ve got a Custom 24 PRS finished in Ocean Turquoise, one of my main studio guitars. 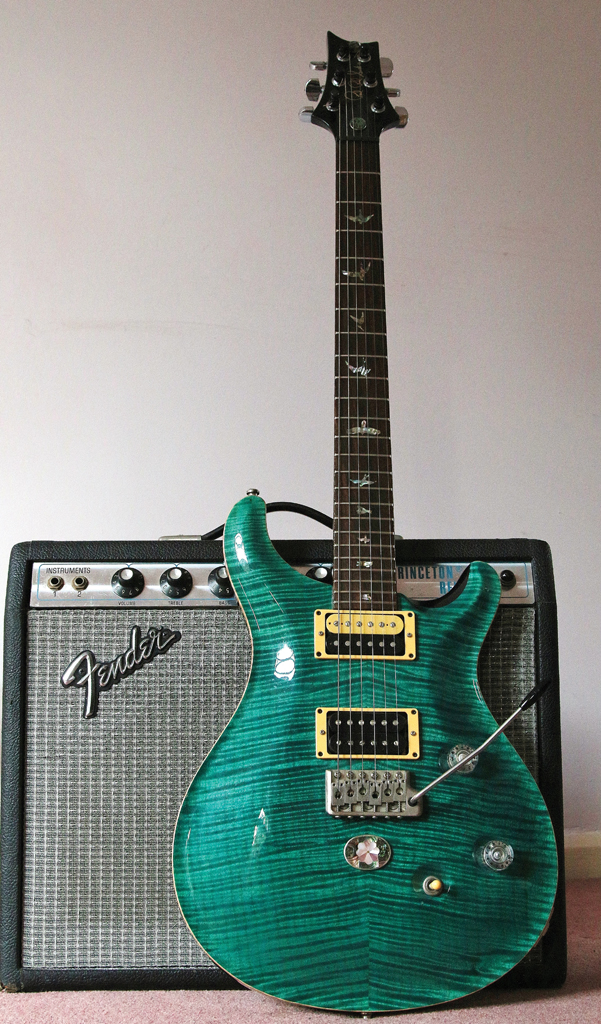 “Natural wear is good, though, like my ’59 Les Paul Junior, which has all the lacquer cracks and has lost the rich red over the years, but what a guitar – think Leslie West. As a kid, that guy was a total inspiration for me. 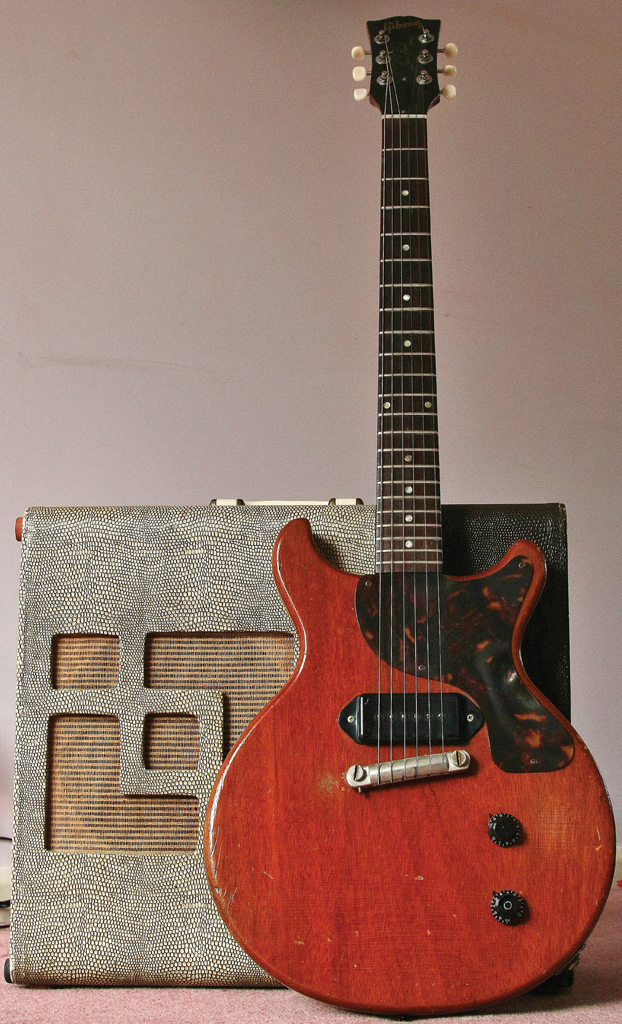 “I’ve another great working guitar, the little ’62 Gibson Melody Maker, sounding even better as I’ve upgraded the pickups with Red Lace Sensors. I bought this on a whim after seeing the guitarist in May Blitz play his through a 200-watt Hiwatt stack in ’70. 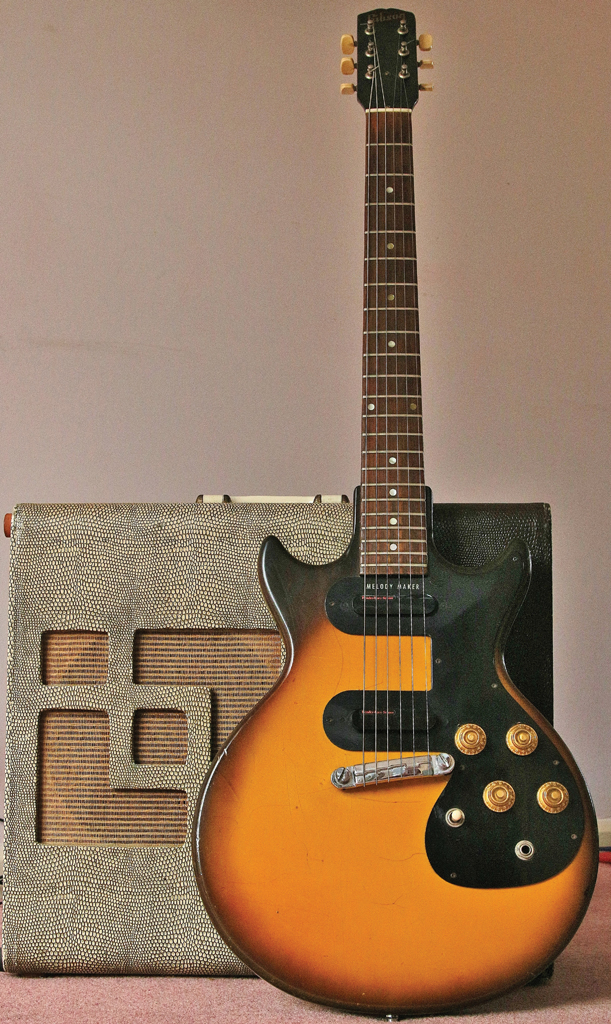 “He also had a Squall pedal, probably the first multi-effects pedal, which was basically a wah with hurricane, surf and siren sounds built in. The Sweet used the siren at the beginning of Blockbuster. I have the Shin-ei version, it’s a killer device – not for the faint-hearted. 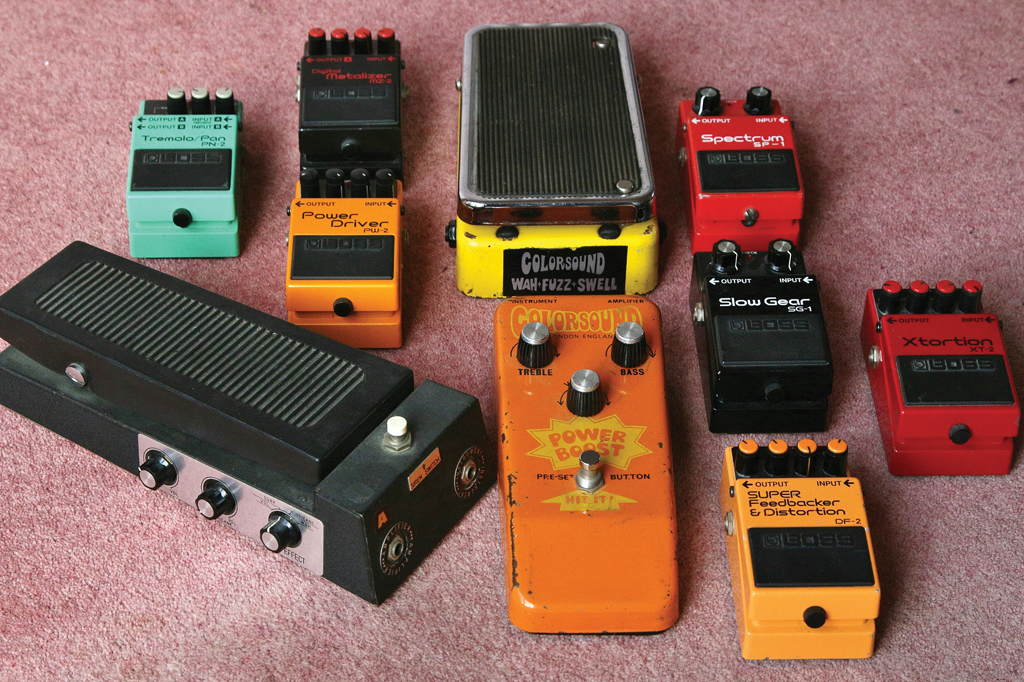 A selection of Sawyer’s pedals

“The whole tone concept, though, is subjective, everyone’s ears are different, I might not like what someone else thinks is a great tone and vice-versa. I just know what I want from a guitar and amp after all these years.

“That also works with the playability for me. I’ve always liked the look and style of the classic Rickenbacker 12-string, for instance, but just couldn’t get on with the narrow neck design, so
I eventually opted for a Fender Electric XII dating from ’66. The tones are amazing, a lot of players say it’s the best electric 12 ever made, although the Rick has the more popular edge, used by the likes Of Roger McGuinn, George Harrison and Tom Petty. 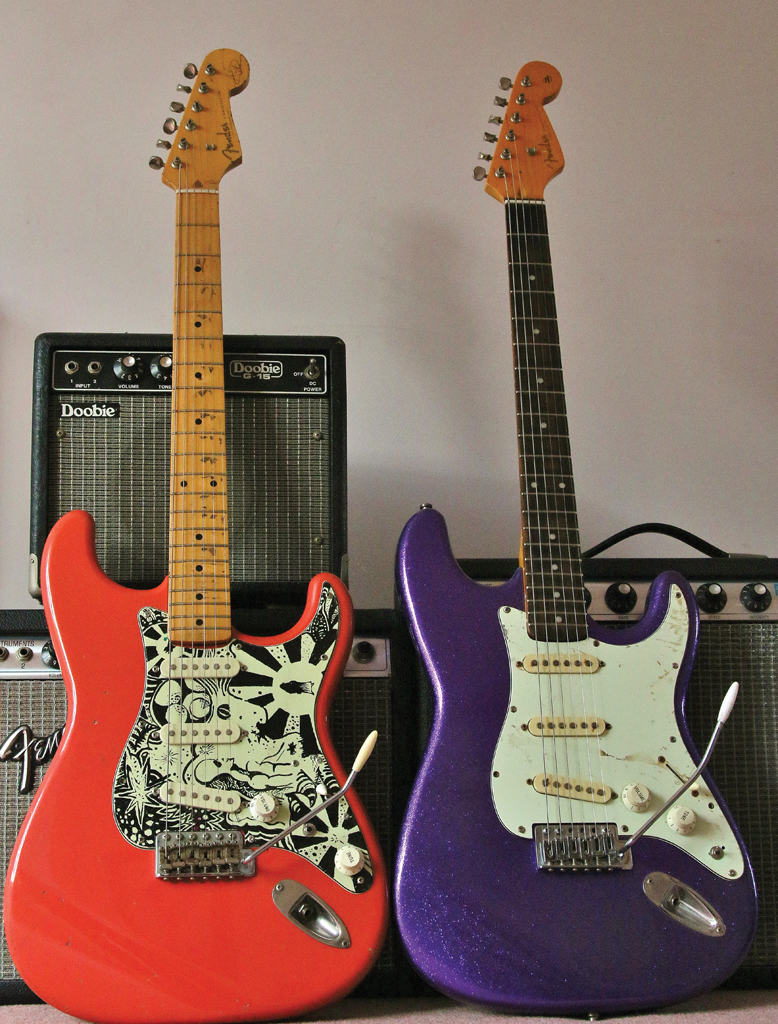 “I love all the posters, bands, guitars and music from the late 60s, early 70s, and I can’t see it changing in the foreseeable future,” Sawyer chuckles. “I actually have the same Hofner Galaxy that so many 60s players drooled over in the shop window, as we couldn’t afford the red Strat. That’s another classic 60s guitar story.” 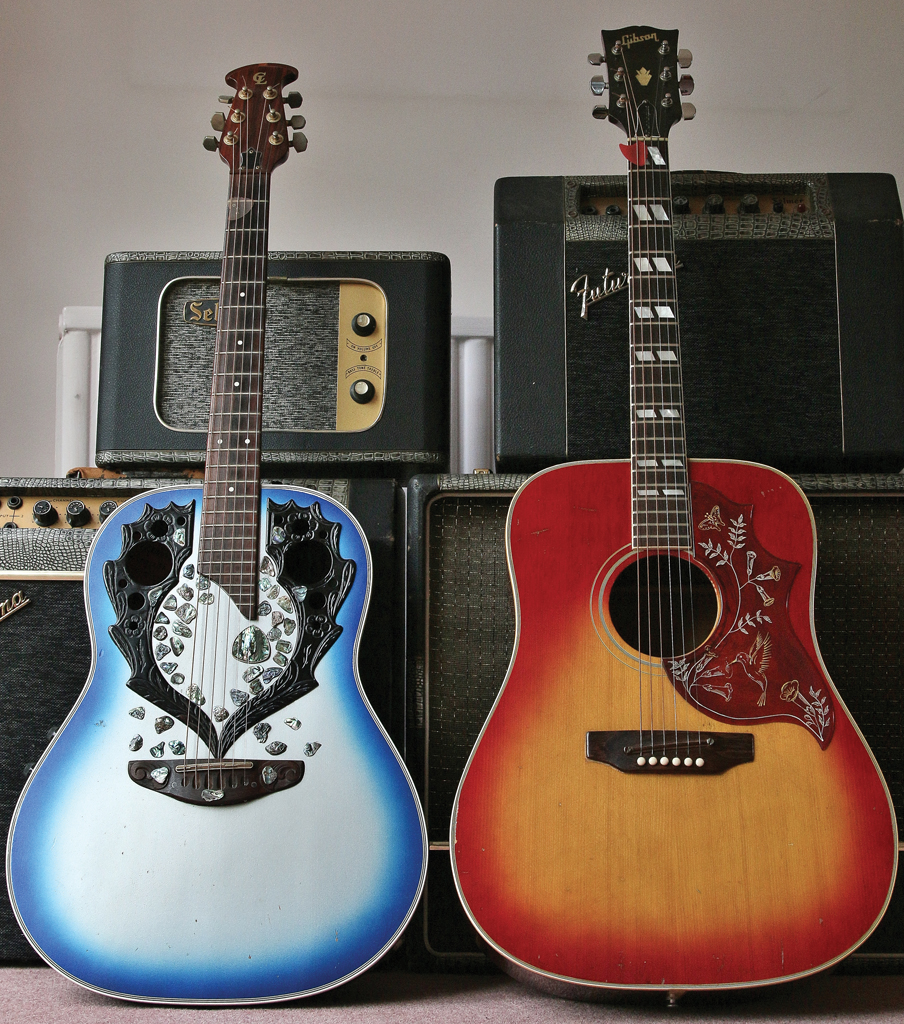