John Etheridge is widely revered for his genre-spanning dexterity on the fretboard. His guitar collection is just as eclectic, as we discover… 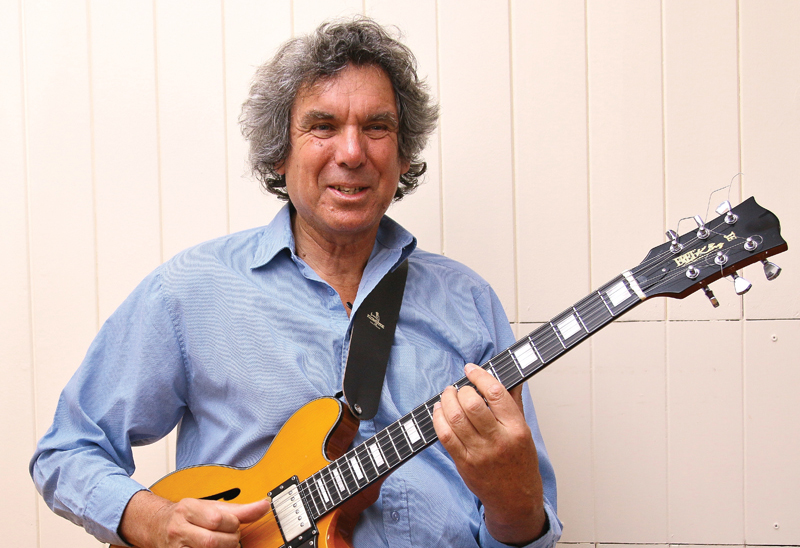 John Etheridge is regarded by many a musician in the business as one of the world’s finest guitar players, having pioneered the way for jazz fusion during the 1970s with the British band The Soft Machine.

The vast list of high-profile artists John Etheridge has worked with includes the likes of Andy Summers, Nigel Kennedy, Stéphane Grappelli, Danny Thompson, Dizzy Gillespie, Yehudi Menuhin, John Williams and even Hawkwind, all of whom have witnessed the speed at which Etheridge can play and his ability to deliver a high level of instrument technique and tone.

Like many top jazz players, John has spent decades touring and honing his craft on classic solid, big bodied semi-acoustic and archtop guitars.

“During the early period of The Soft Machine, around 1975, I was using a ’62 Fender Stratocaster, which I had bought from bassist Dek Messecar when we were both in the band Darryl Way’s Wolf,” explains John.

“I used that Strat for ages and it was on the ’76 album called Softs, which has recently been reissued. I have two here, a ’64 sunburst and a ’62, which has been taken back to the wood. I have friends who have had Les Pauls and Strats from the 50s and 60s, some are great and some are absolutely horrible. These two Strats are stunning, they both play beautifully, whilst sonically they are very individual.” 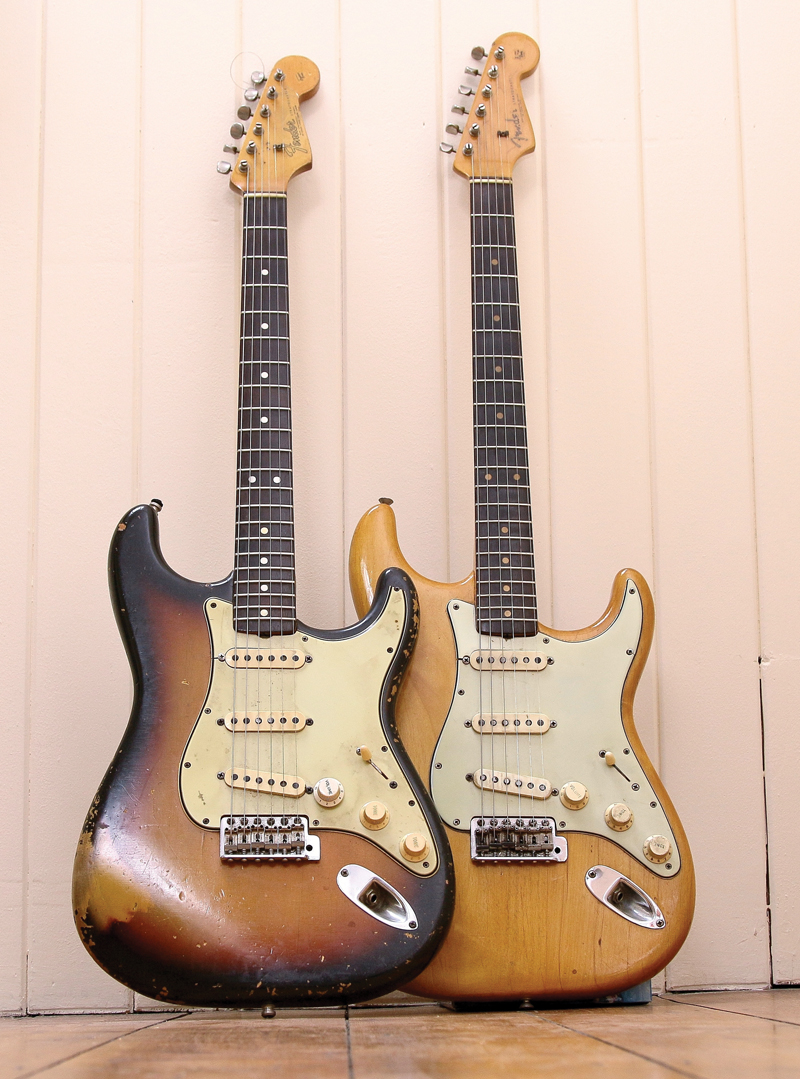 “A Strat is arguably the quintessential guitar, and there’s no need to sing its praises here, but whilst I really liked the sound, it just wasn’t the right guitar physically for my playing.”

“As soon as I changed to a Gibson I found my right hand was more relaxed and I could play faster. I was familiar with the neck profile, as I’d been playing an SG from the age of 15, so I graduated from a Strat to a three-pickup Gibson SG Type 2 Custom. I adored that guitar, it had a really fast neck, but it was stolen in Paris in August 1977.”

“I searched high and low for a replacement, but there were very few to be found. I bought a ’61 Les Paul Custom as a stop-gap. It had been sprayed black, so I had it refinished back to white and added a third humbucker and a Vibrola system as well. I believe I paid far too much for this one.” 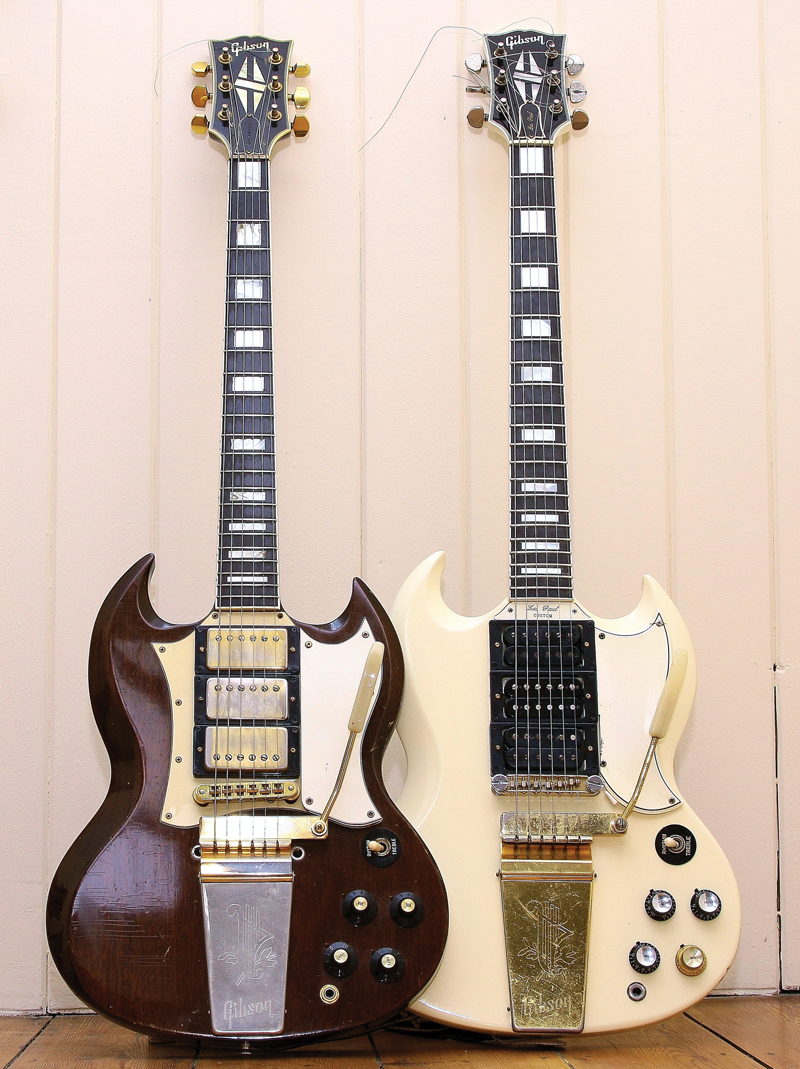 “Eventually, this 60s Gibson SG Custom in walnut was the closest I could find to the stolen model, which I tried to emulate by adding black pickup surrounds and a gold-plated Vibrola system. There’s only one original humbucker here as well, I think the middle and bridge units are Seymour Duncan.”

“You’ll notice on the walnut SG that I piggy-backed another scratchplate on top of the original, so I had a little extra height for the little finger of my strumming hand.” 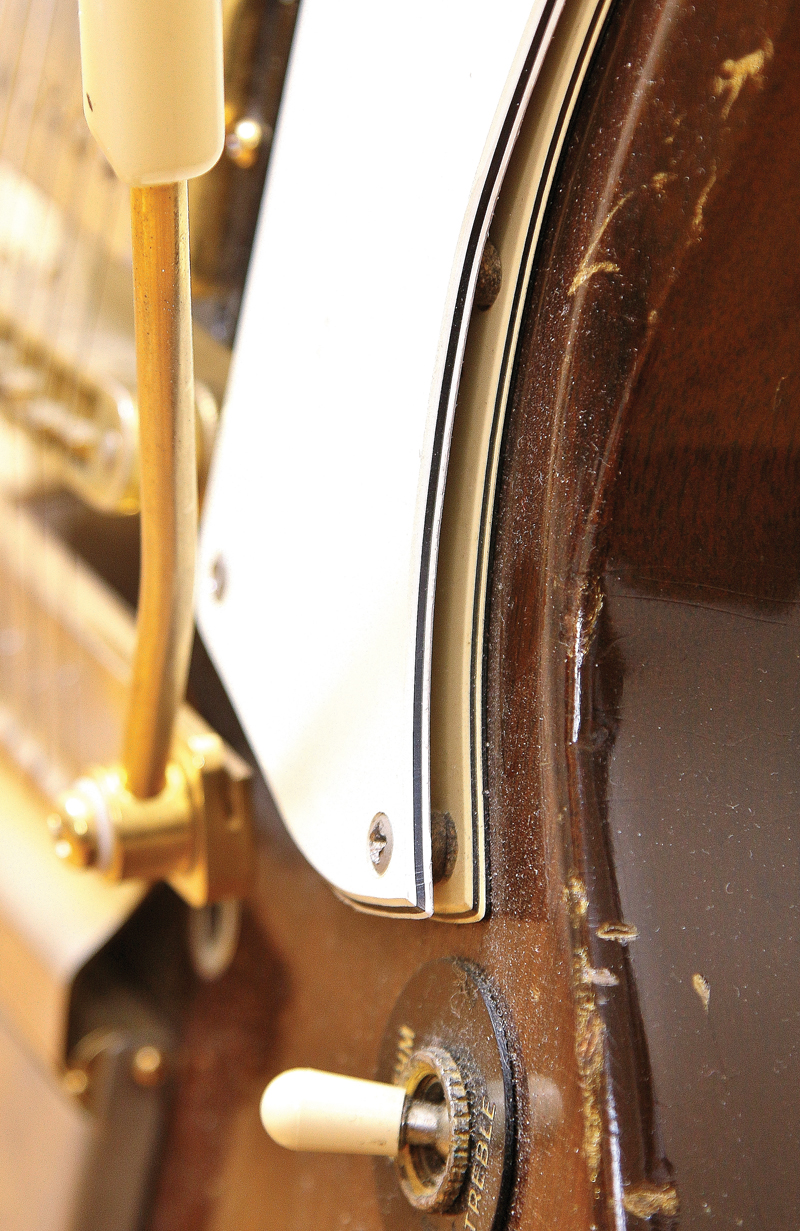 “I played an SG for years, they’re great rock guitars, but I started to find mid-60s necks too narrow for my style. I moved forward years ago and started to play guitars which I felt valued my style of playing within sound and playability. I still love Fender guitars, but by nature I am a Gibson player. I think a lot of players out there are on the wrong guitar, if you know what I mean.”

“It took me a while to sort out what was the best for me. My dad was a jazz pianist, so jazz was all over the house, which I loved, and I also liked Hank Marvin, the gypsy jazz that Django Reinhardt played, and blues from the likes of Buddy Guy.”

“When I was about 17, I was in the inevitable school band in the mid-60s and starting to hang out in some of London’s now legendary rock, blues and jazz venues. The Speakeasy Club was a late-night meeting place, and one of the guys in our band organised Jimi Hendrix to come and see us play.”

“He said I was great, which I’ll always remember. In late ’65, I went to see Eric Clapton in John Mayall’s Bluesbreakers. It was that iconic period when he played a Les Paul through a Marshall, which blew everyone’s mind.”

“Guitarists were saying Eric was just another London guitarist, but he invented the whole thing and influenced so many up-and-coming household names in the guitar world. The big giveaway was they all ripped off his playing and everyone went out and bought a Les Paul and a Marshall. I know this because I was there, on the spot at the time. I got to know him and he liked my style.” 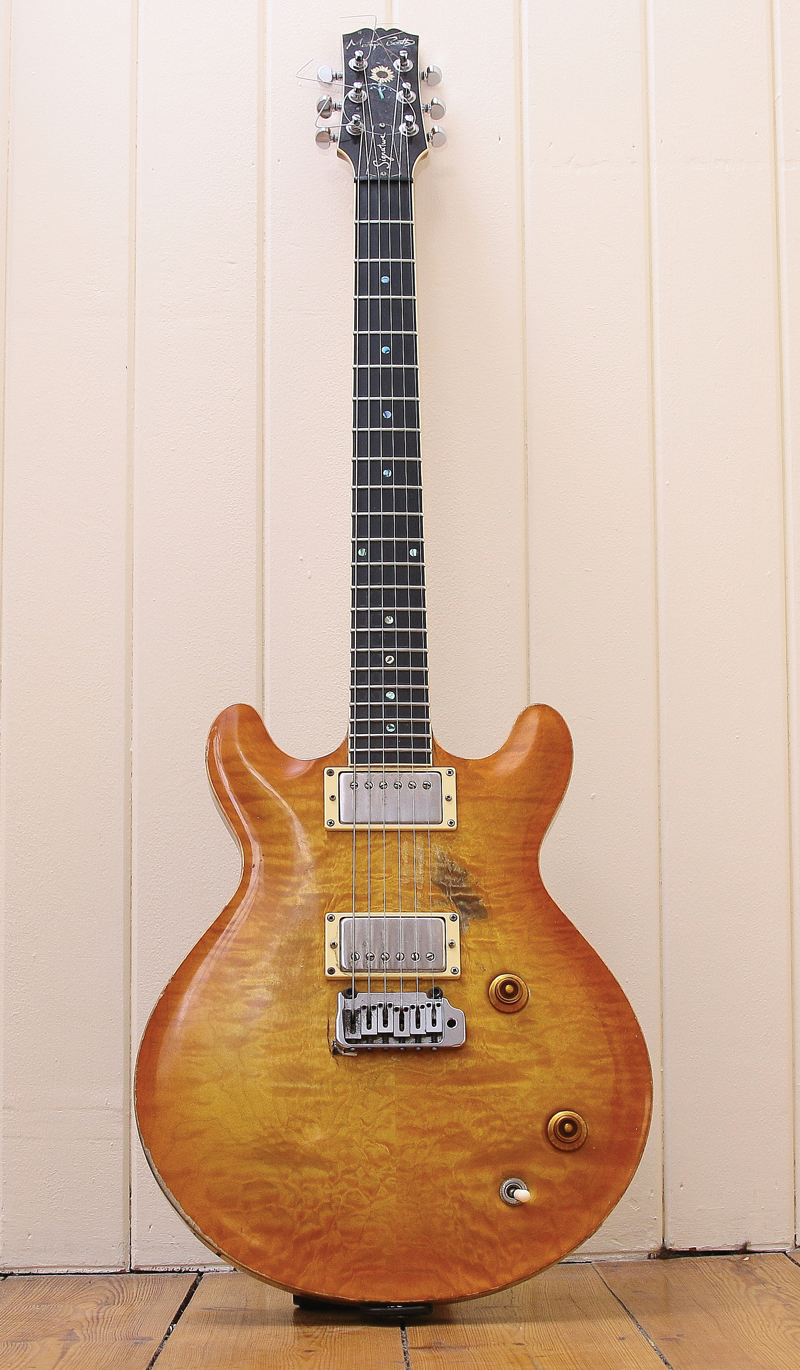 “My favourite solid-bodied guitar for live and recording work for a long time has been this Martyn Booth Signature. Martyn is a great British luthier. He was so helpful when I asked for my own spec within the design. This included a maple-over-mahogany body, through-body stringing, coil-tapped Seymour Duncan jazz pickups and a Hipshot vibrato system.” 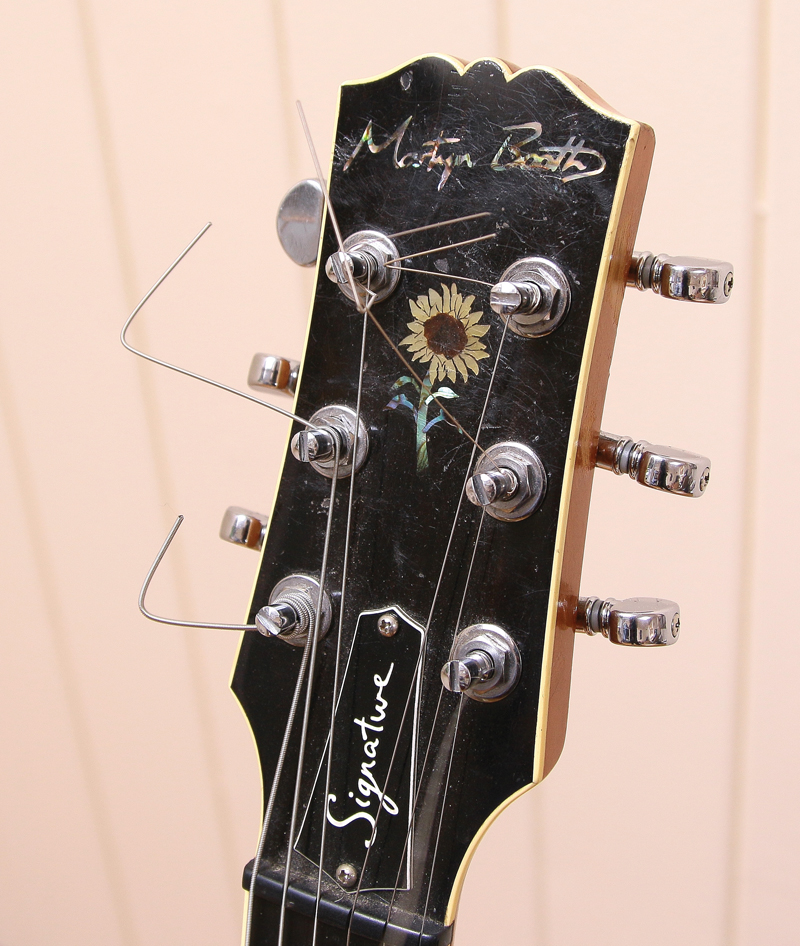 “We worked on the neck dimensions for ages, and he produced one of the most comfortable I’ve played, extra fat and with a wide ebony fingerboard and jumbo frets. Each of his models has an individual headstock inlay, mine has a sunflower.” The playability and precision of the neck and fingerboard are of the utmost importance for John’s playing style.”

“They have to be spot-on, especially if I’m shifting chord shapes really quickly whilst keeping the top and bottom lines going,” he says. “I’ve played a lot of vintage Les Pauls from the 50s, and whilst they sound great, they’re really tough to play. For me, speed is of the essence, so it has to be an ebony fingerboard, as on this 60s Gibson 355 Stereo, which I bought from New York’s 48th street in 1978.” 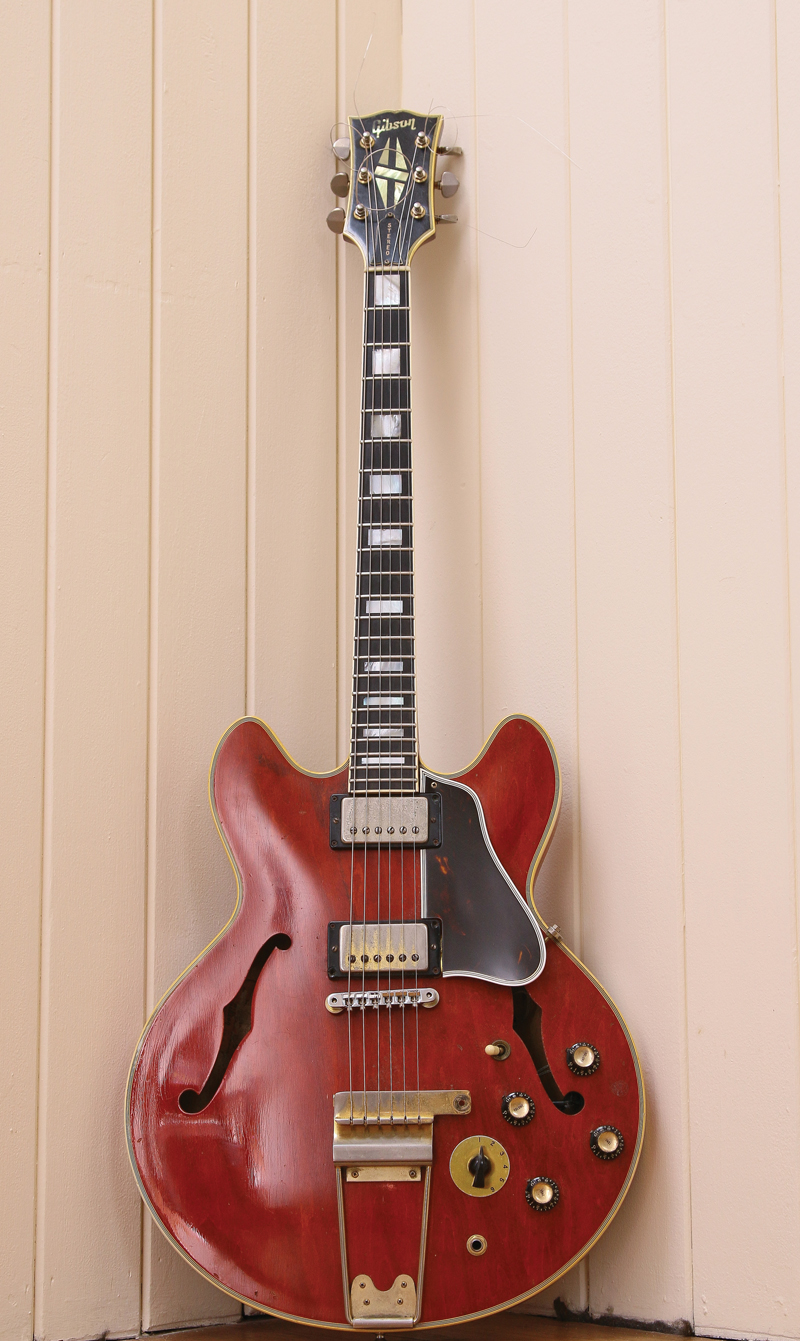 “I played this one for a while, but as I have huge hands, the narrow neck problem crept in again. I persevered for a while, then came across this Yamaha SA 2000 with a wider neck that felt great. So I set about installing a pair of Seymour Duncan humbuckers and carved up the body to fit a Kahler vibrato.” 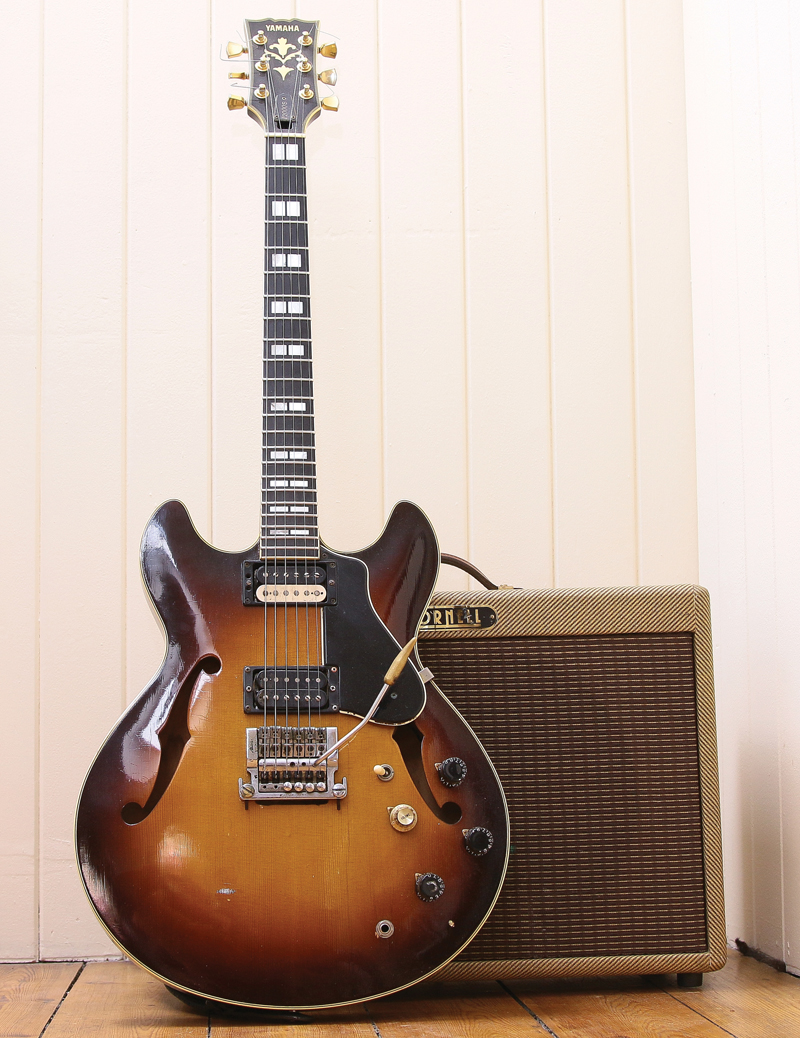 “I was so pleased with this guitar and its performance that I used it live alongside this Rosendean Black Ruby for the next 25 years.” 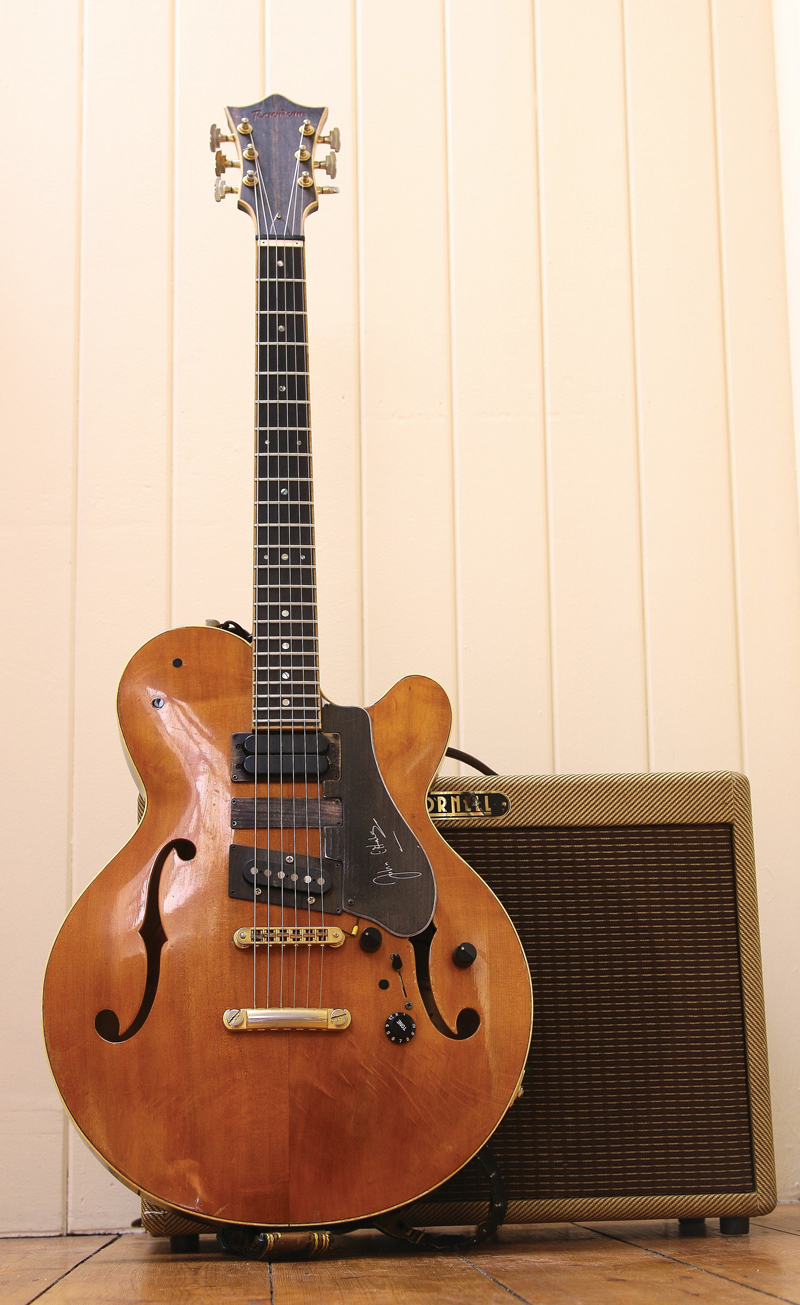 “The Black Ruby was custom built for me by Trevor Dean, another brilliant UK luthier, in ’96. It’s a large semi-acoustic archtop, the back and sides are built from black-eyed Iranian larch, giving exceptional lightness and strength with a half block running under the pickups.” 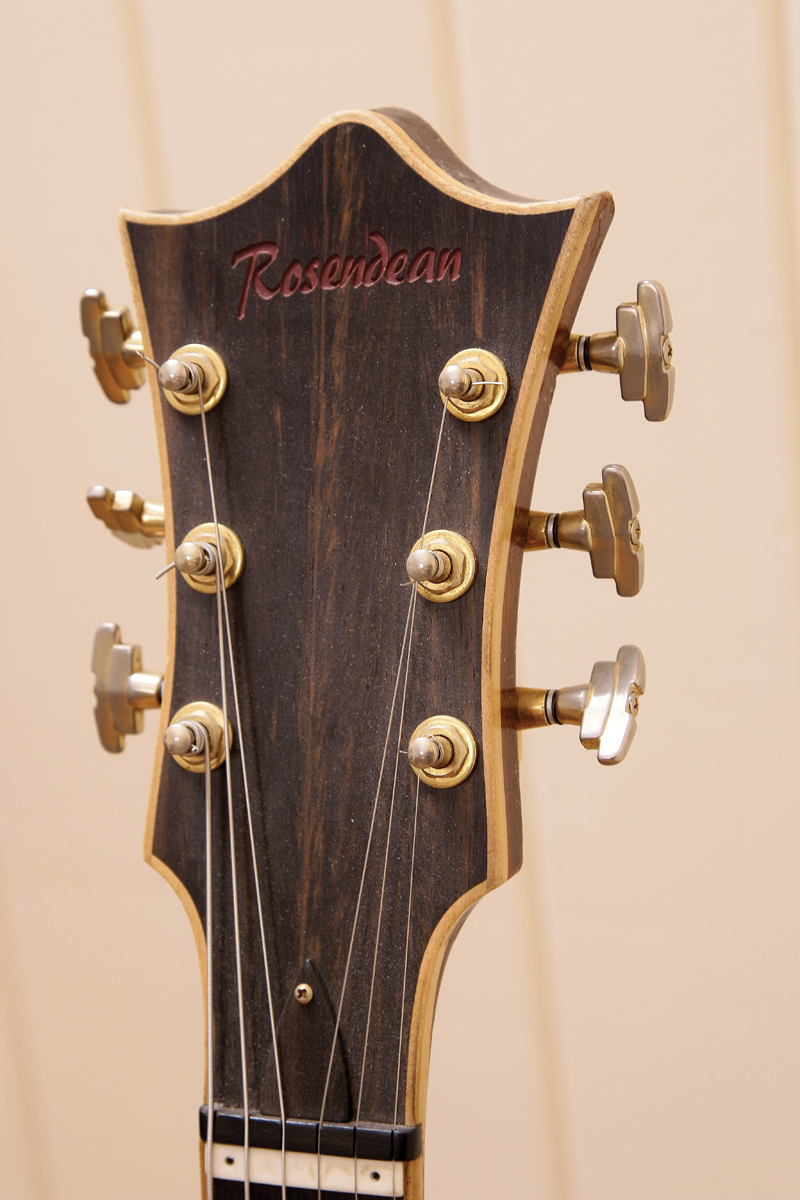 “A couple of years ago, I made an album of library music, where I was asked to record a jazz guitar album, so I used several of my archtop jazz guitars. These included a pair of Gibson ES-150 models, one fitted with a P-90, dating from ’52, another from 1937 fitted with a Charlie Christian pickup.” 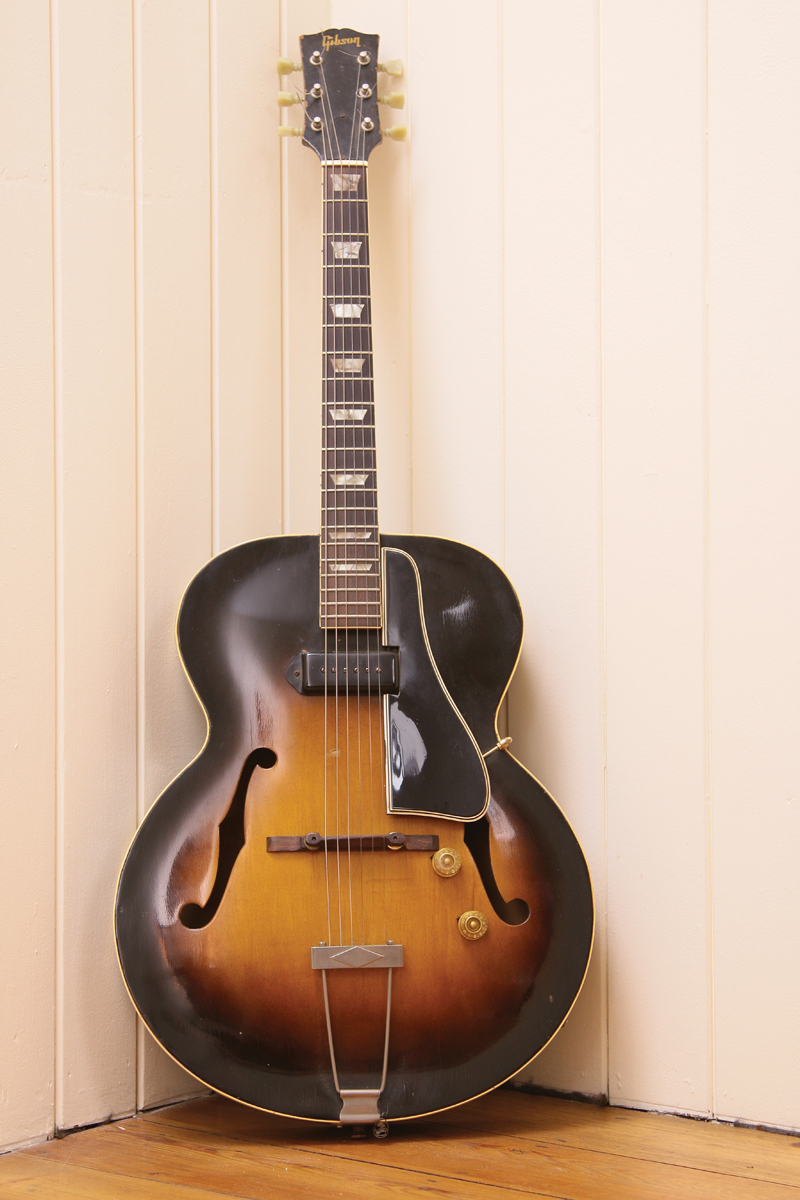 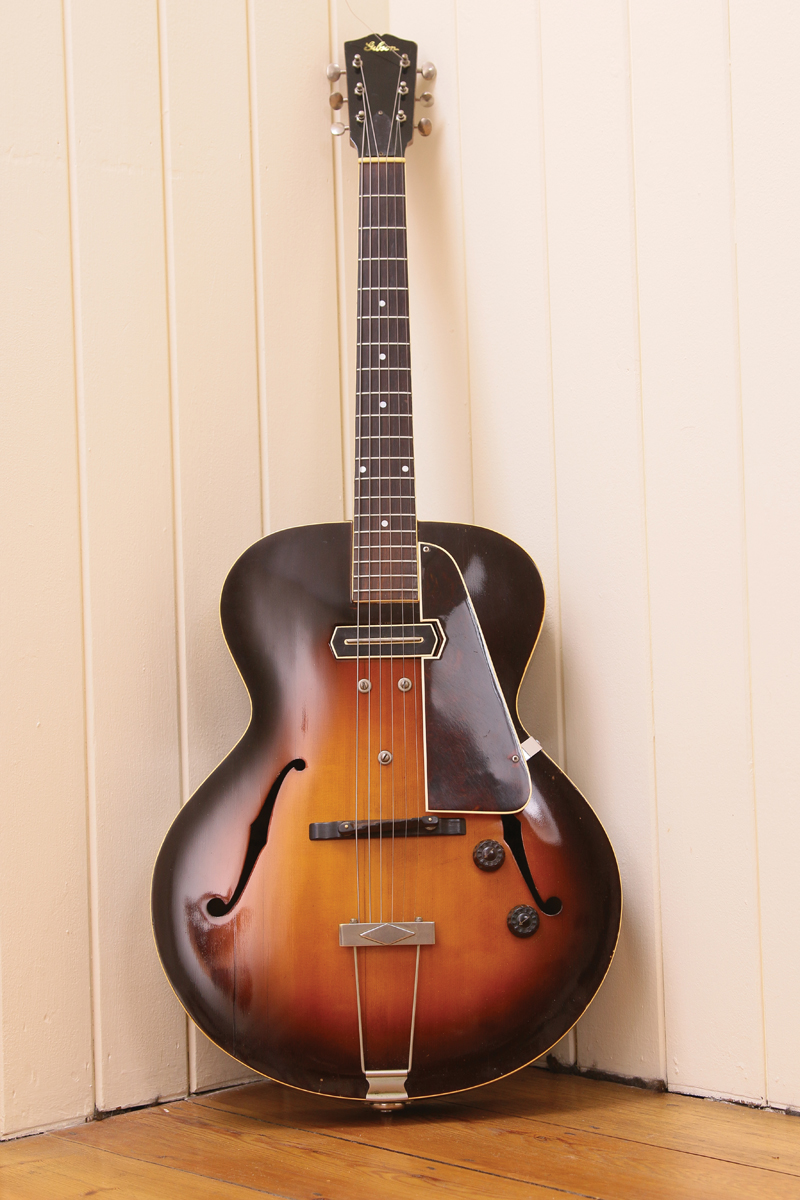 “This wonderful Gibson Super 400, which belonged to Louis Stewart, one of the world’s finest jazz guitarists. This is such a charismatic instrument, which has an enormous body but a skinny neck.” 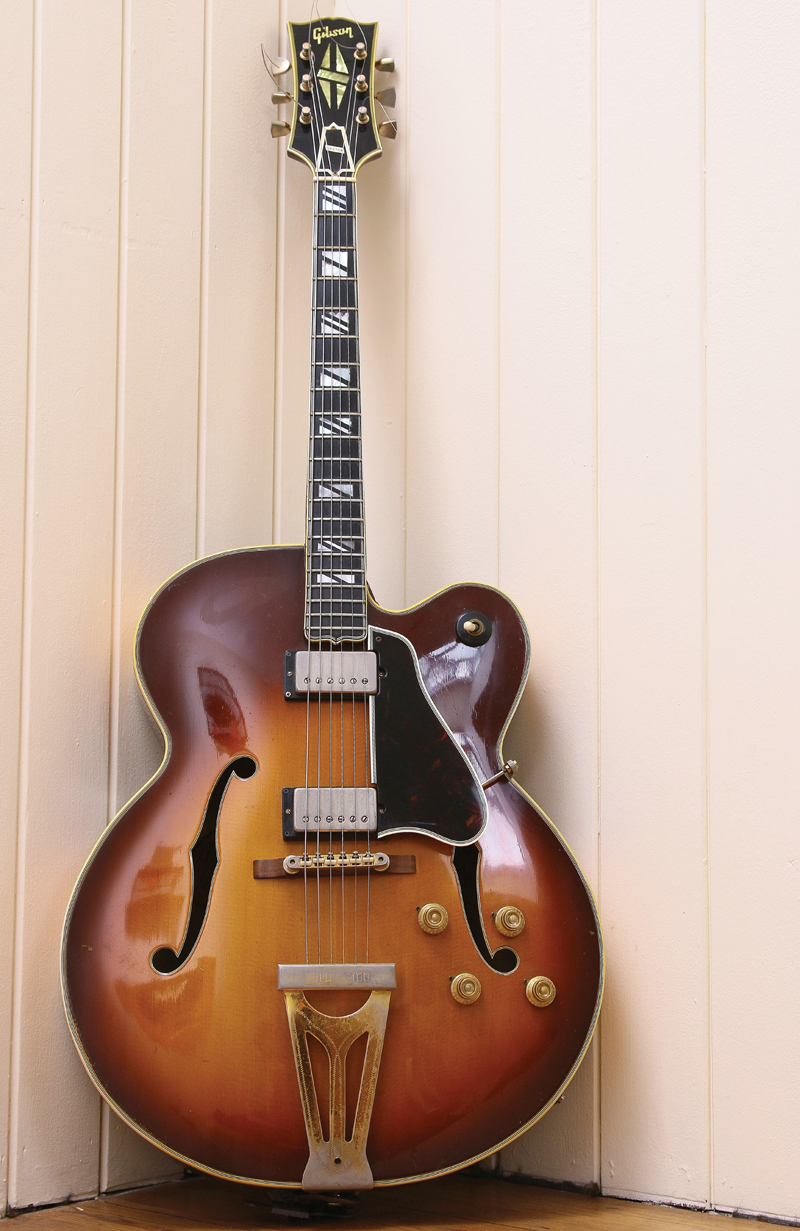 “I also used this Hofner A2L on that album.” 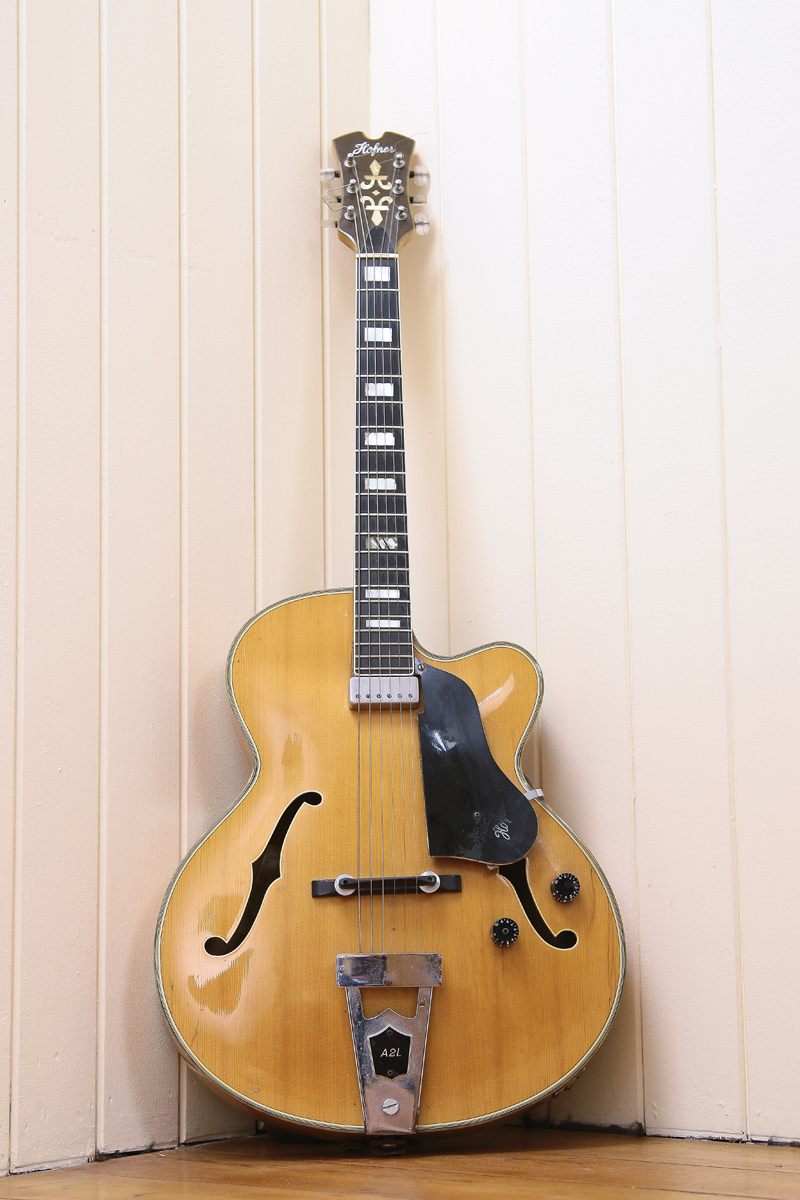 “I did a lot of radical work on this guitar, which included fitting a floating Gibson pickup, which gives more attack at the front of the note but less sustain. I also had an ebony fingerboard fitted and it all worked a treat. I used this one on an album called Whatever’s Best, which I recorded with Danny Thompson.”

“I’m currently mixing my next album – out later in 2015 – which features myself and the amazing Vimala Rowe on vocals. I’m using this ’83 Tele, which has top-loaded strings through the bridge plate.” 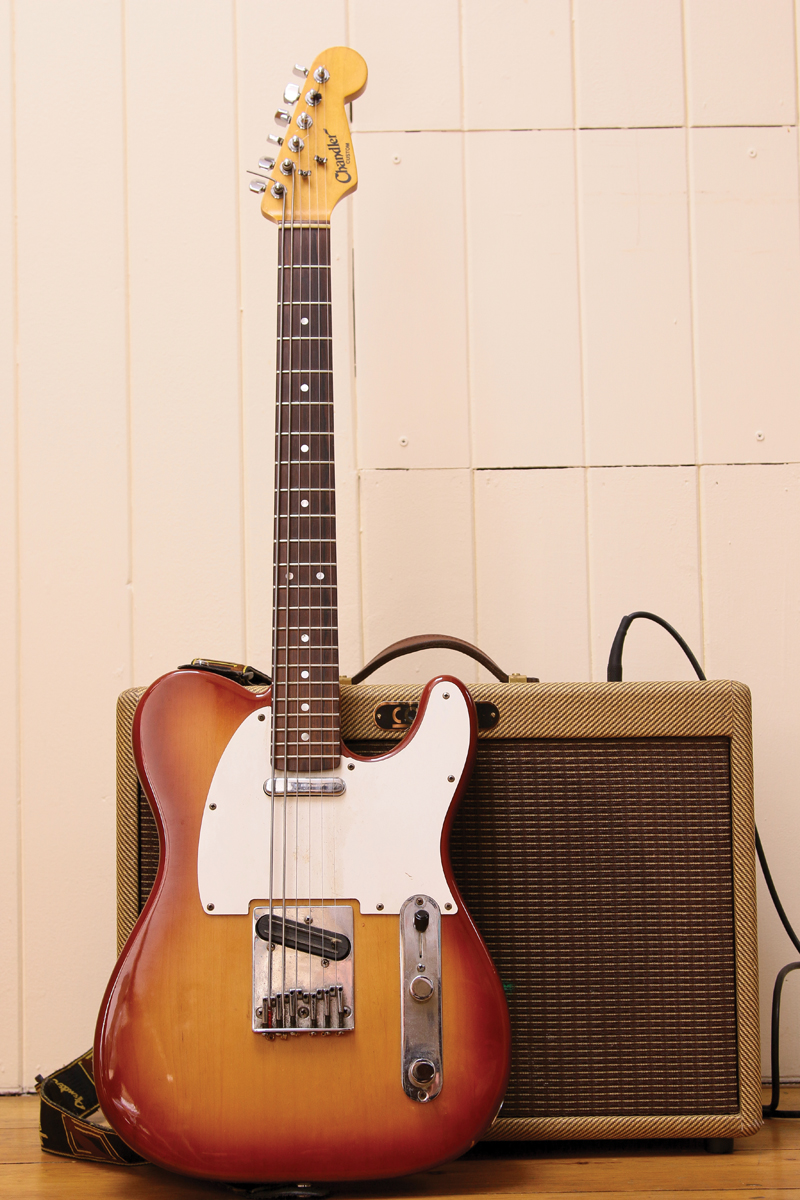 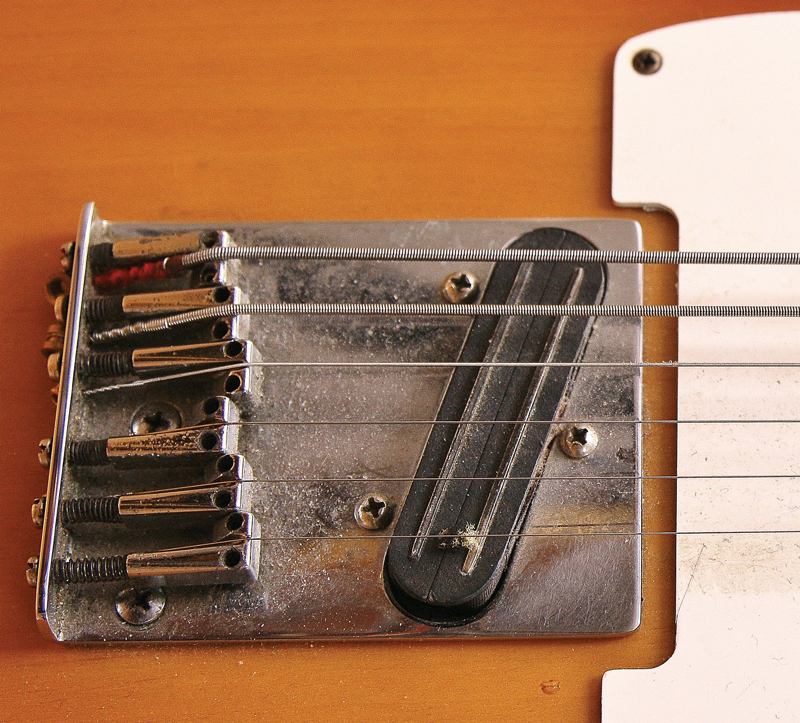 “If you look closely at the bridge, you’ll see I’ve replaced the A and low E with bass guitar strings. I play a walking bassline with my thumb whilst picking chord shapes, it’s really effective. There’s a track called Dark Shadow on this album, where you’d think there was the tightest double bass playing along with me.” 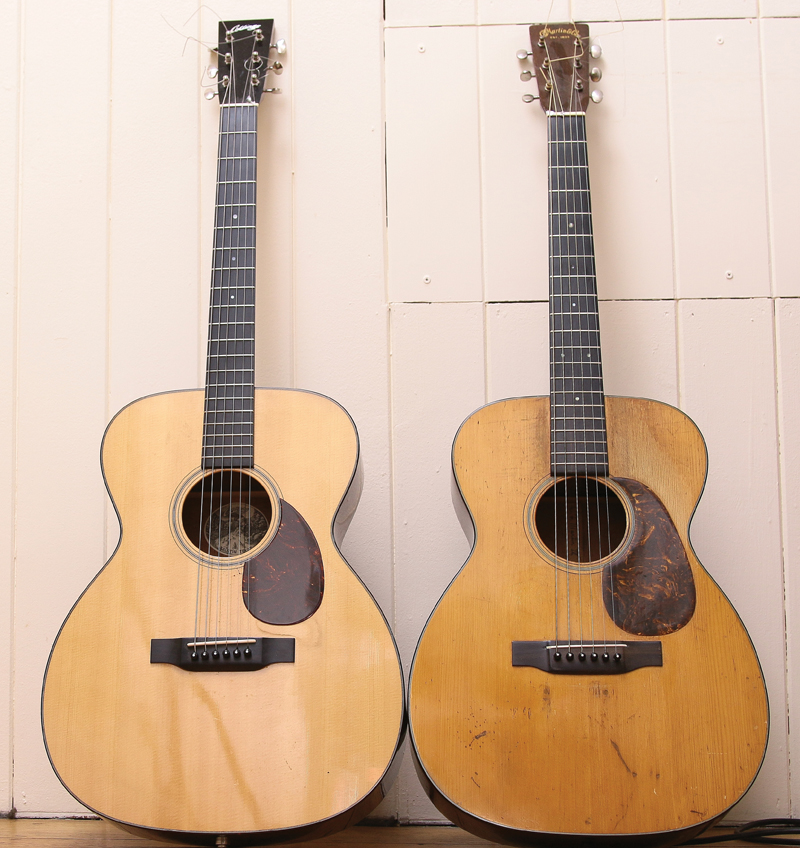 “I have several acoustics, a nice Martin 00-18 dating from 1938, which sounds lovely, but hard to play, and this Collings 0M1, which is their take on the Martin. It’s superbly put together and plays like a dream.”

Whilst John loves the authenticity of old archtop classics for live work, he is rather pleased with his modern-day semi. 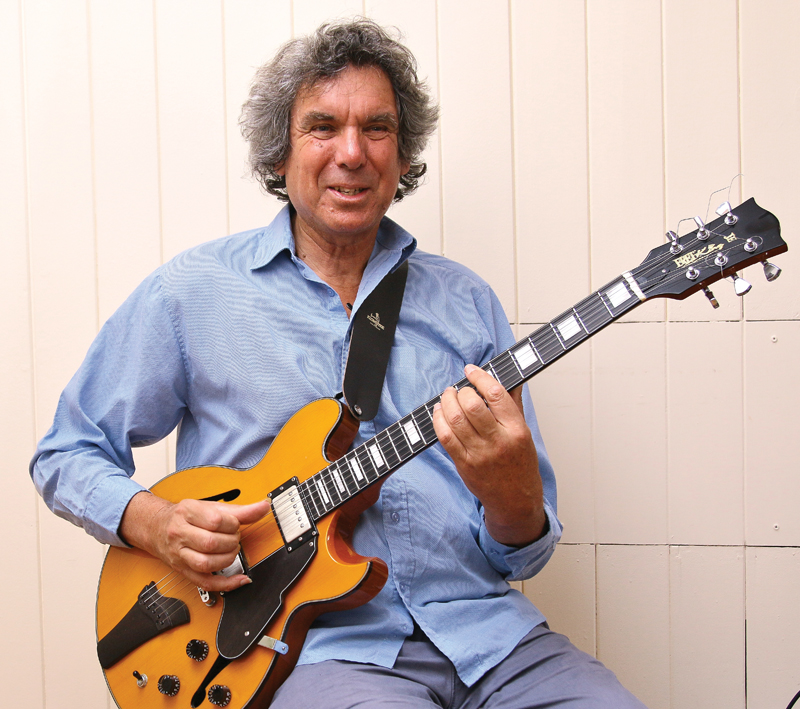 “Trevor Wilkinson at Fret-King Guitars said he’d like to build me a signature model. I asked for a small-bodied semi-solid with a half block, a deeper wider neck, ebony fingerboard and through-body stringing. Here it is, a Fret-King Black Label FKV3JE Elise, which I’m very pleased with. It also has the company’s Vari-Coil system, so I can wind down the humbuckers progressively to single coils and back.” 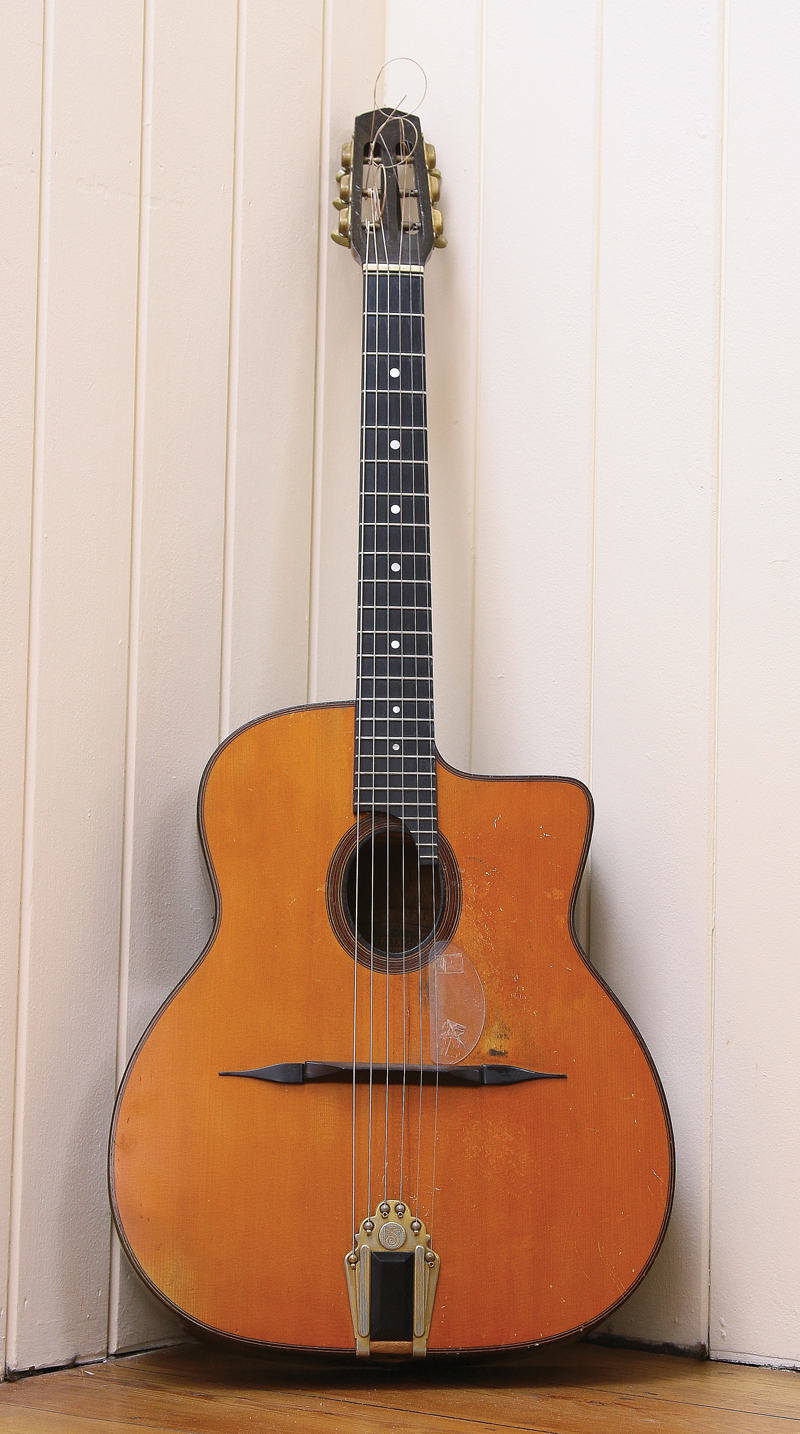 “About seven years ago, I bought this original Selmer Maccaferri, built in 1934, which has an unusually short 24¼-inch scale, instead of 26½. I’m sure this is what makes this guitar so special
for Gypsy jazz.” 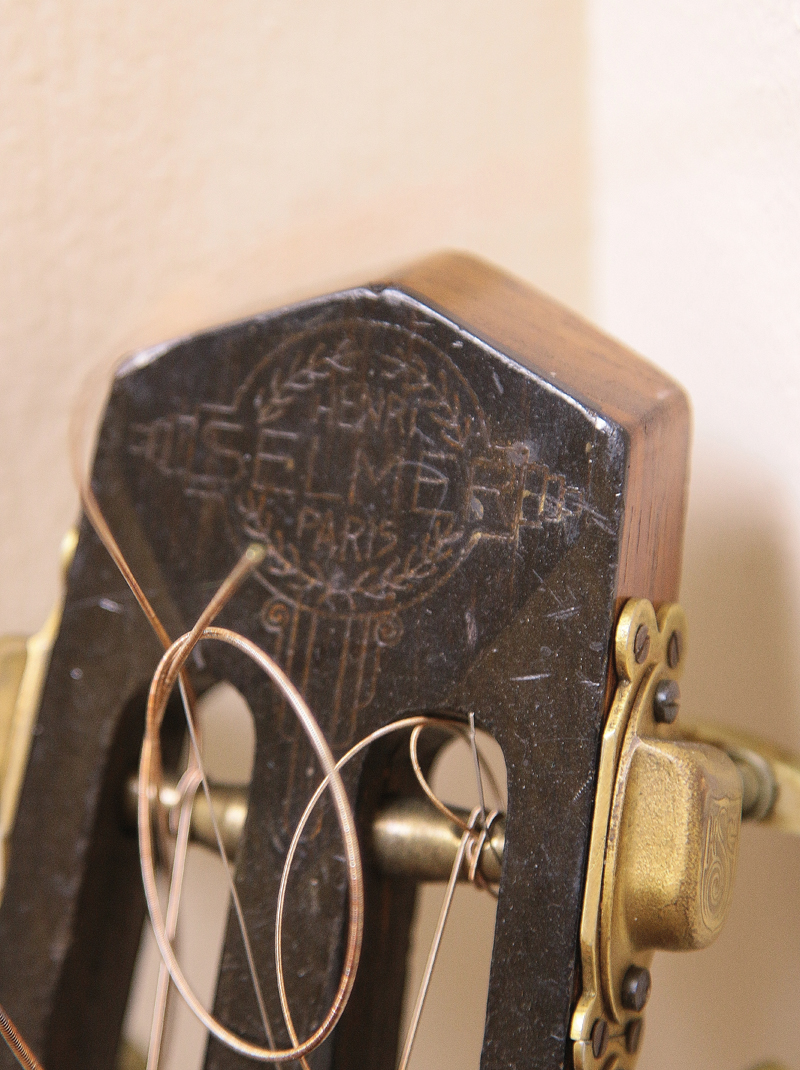 “It’s a bit fragile for the road now, but it’s been on numerous albums recorded with my band Sweet Chorus. I originally put this band together as a tribute to the French jazz violinist, the late Stéphane Grappelli, who I played and toured with for many years.”

Gypsy jazz players and fast fingerpickers will know, playing this style on steel strings really plays havoc with the fingernails.

“Oh for sure,” says John. “I go regularly to the nearest nail bar and get them reinforced with an acrylic covering. I kinda get some odd looks from the ladies when I walk in, I’m thinking of getting a t-shirt with ‘Guitar Player’ written on it!”