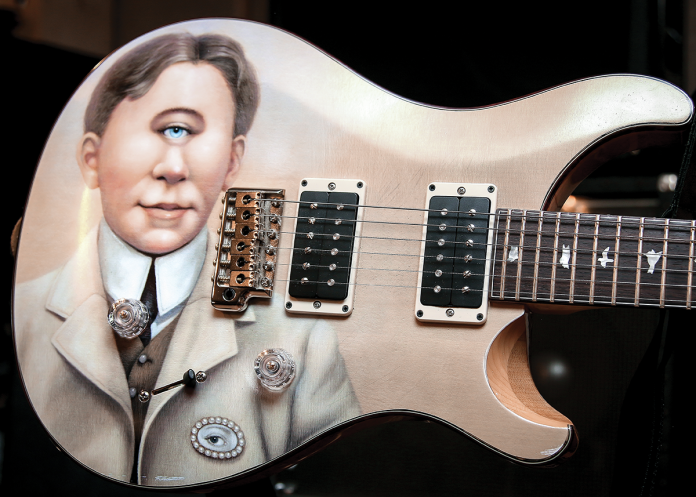 Always a fan of early progressive rock, jazz and fusion guitar playing, Jakko Jakszyk has not only found himself in the King Crimson hot seat as vocalist and guitarist, he’s also a successful solo artist, session player, producer and actor. “As a kid, I loved listening to intricate guitar parts related to progressive pop, fusion and jazz played by the likes of Allan Holdsworth and Robert Fripp,” says Jakszyk.

“I saw King Crimson when I was 13 at Watford Town Hall. I remember watching Robert and thinking, ‘I’ll never be able to do that’. I’ve played in this style now for many years on numerous albums, and here I am playing lead guitar and taking lead vocals on 21st Century Schizoid Man. 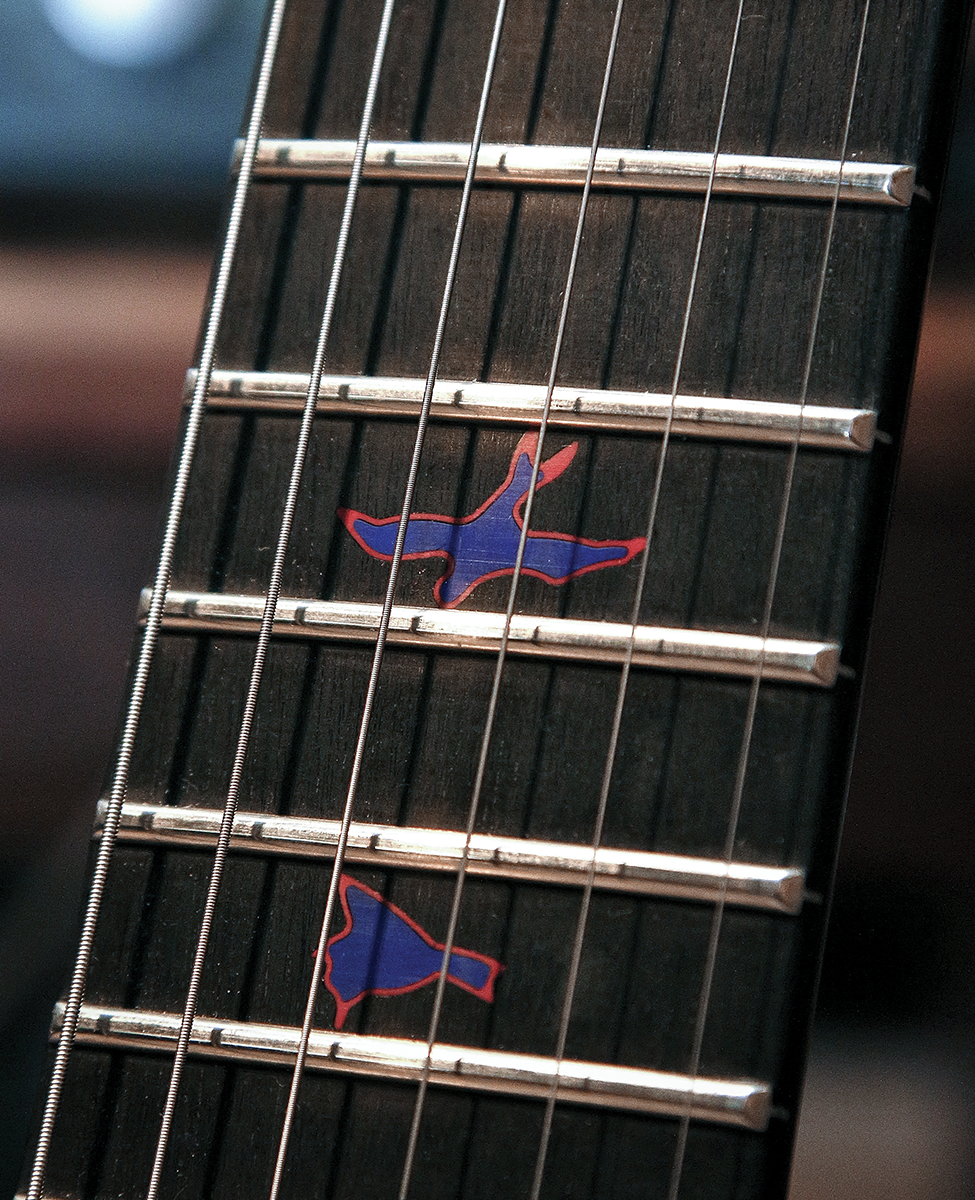 Blue and red bird inlays on the P24

“A lot of these songs are closely arranged, almost with a classical approach. King Crimson has three drummers, all playing in different time signatures. I have heard it said that the percussion in this band is like one drummer with 12 limbs.
“It’s incredibly well rehearsed, Robert and myself will go through new material and readdress older songs. The early material was written and played by Robert in standard tuning, but since the 80s he’s employed New Standard Tuning. This makes some of the early guitar work very difficult to play in terms of ergonomics, just getting to the notes for example, which suddenly aren’t as close as they used to be. I have to be on my toes, as occasionally he just asks me to play his parts. 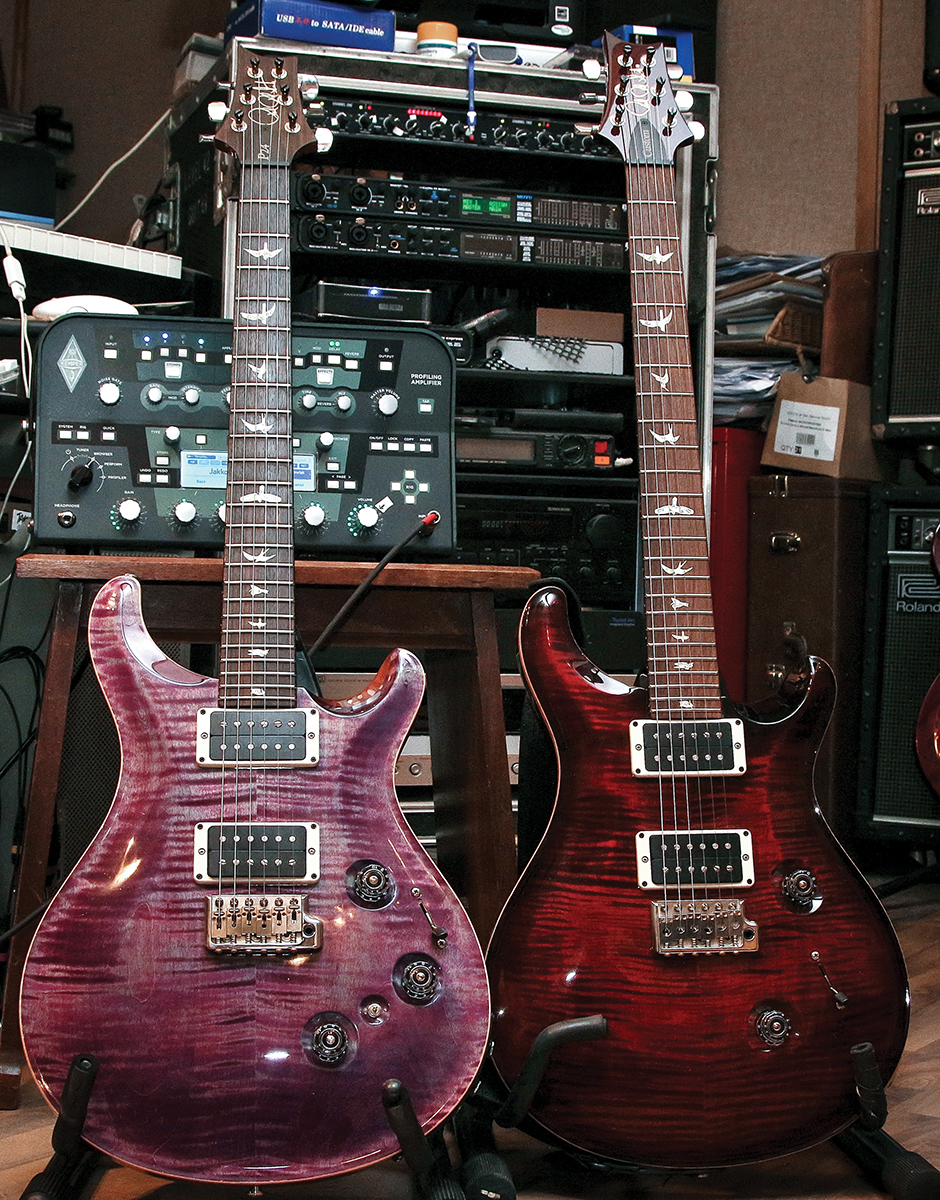 “When I joined King Crimson in 2013, PRS was keen to do something special, above and beyond my requests, which were a guitar with a custom neck profile and a piezo in the bridge on a P24 model. I said I’d love a guitar finished with a painting of the Schizoid Man, like on the cover of In The Court Of The Crimson King, designed by Barry Godber.
“I called Phil Smee, who has designed many iconic album covers, and he cleverly stretched the image so that the face was at the bulk of the body, as opposed to the original gatefold vinyl album cover, where the main part of the face was on the right-hand side. PRS came up with the blue and red bird inlays in the ebony fingerboard, which match a treat. They’ve put some thought into the design as well, little things like see-through controls to not distract from the image. 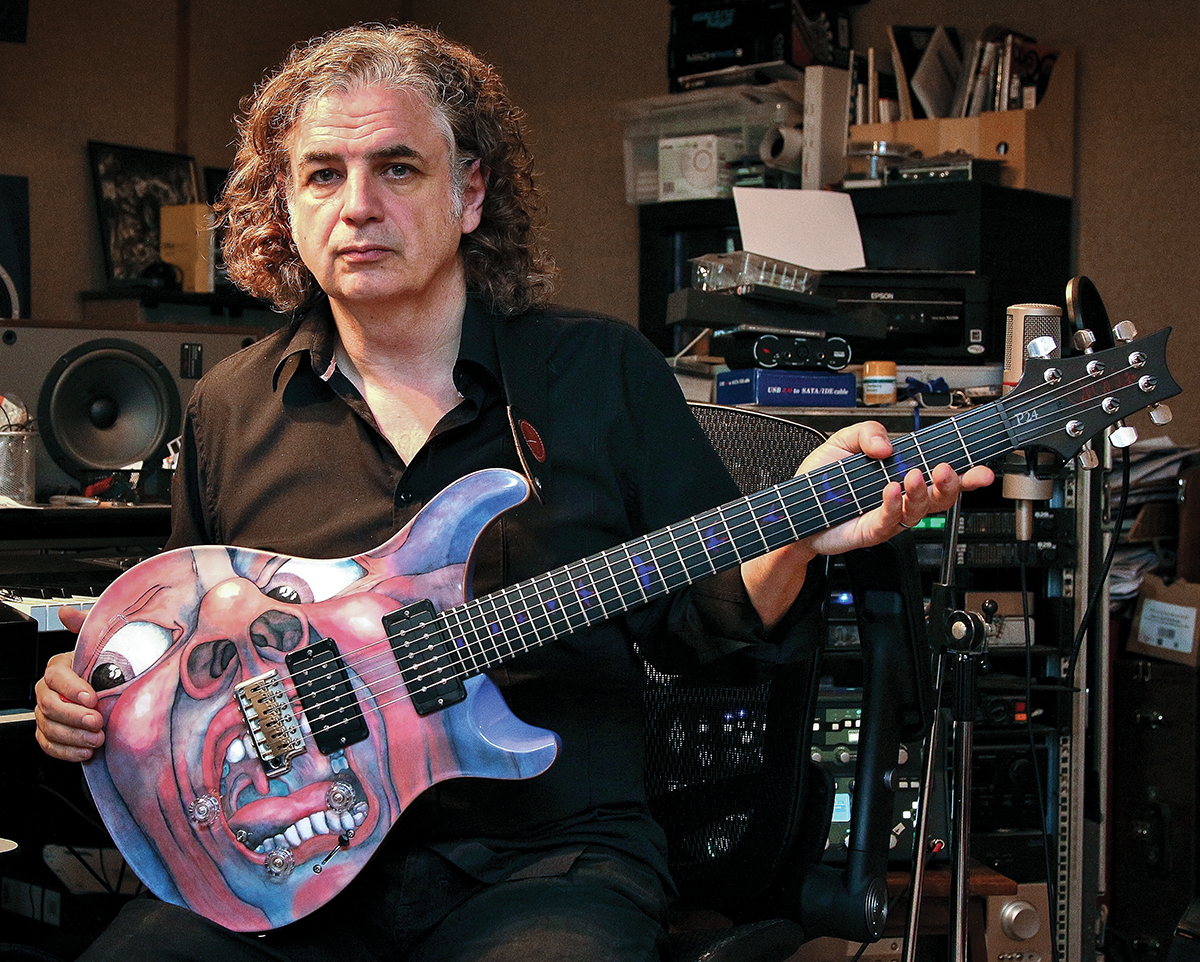 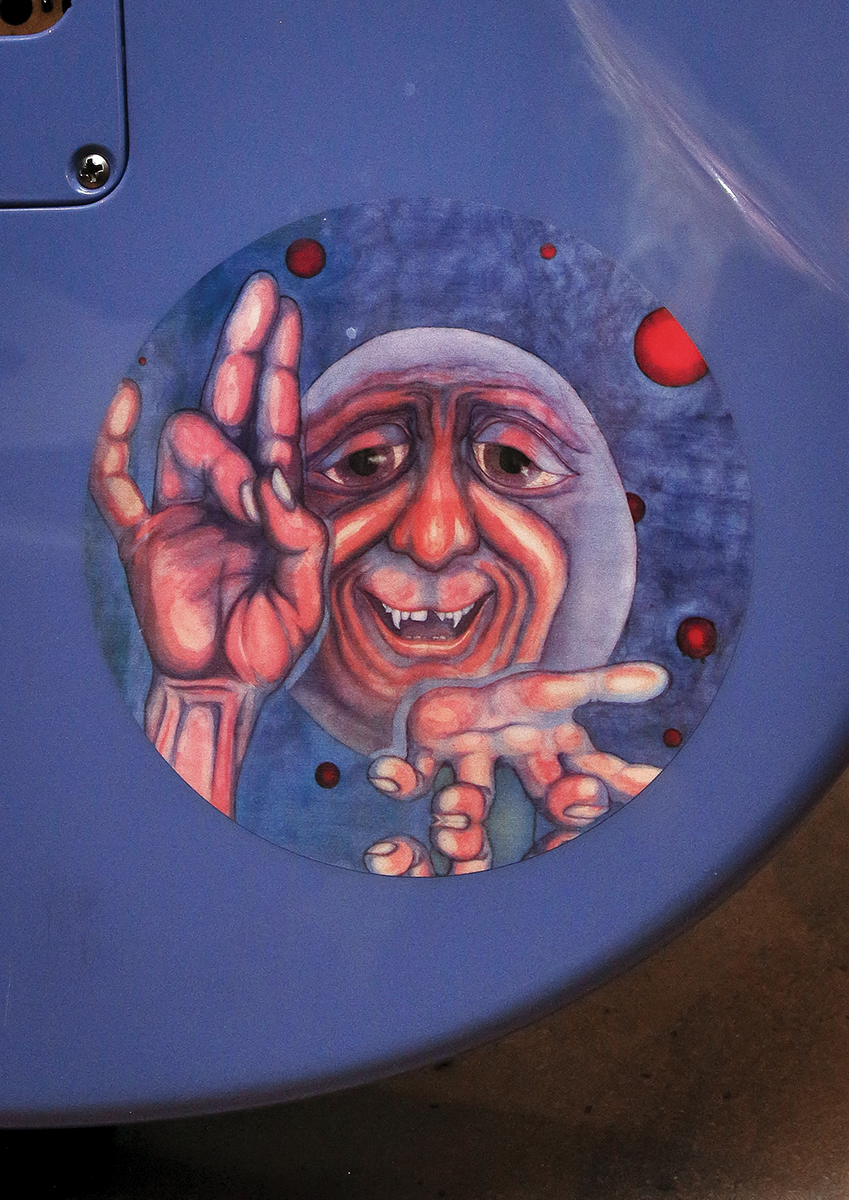 “This is my main guitar for live work with King Crimson, it’s a delight to play. A lot of the guitar passages are fast, but are made a little easier by the ebony fingerboard and smooth frets. My string gauge is quite light as well, usually 9-42 with a fairly low action. I’m a fan of the slightly lower-output pickups, overwound pickups sound a little fuzzy to my ear.
I also have a PRS SE, which continues the King Crimson theme with the one-eyed guy on the front. Apart from that, it’s a stock guitar, but very nice to play. I have another P24, which is my second-choice guitar, in a see-through violet finish. 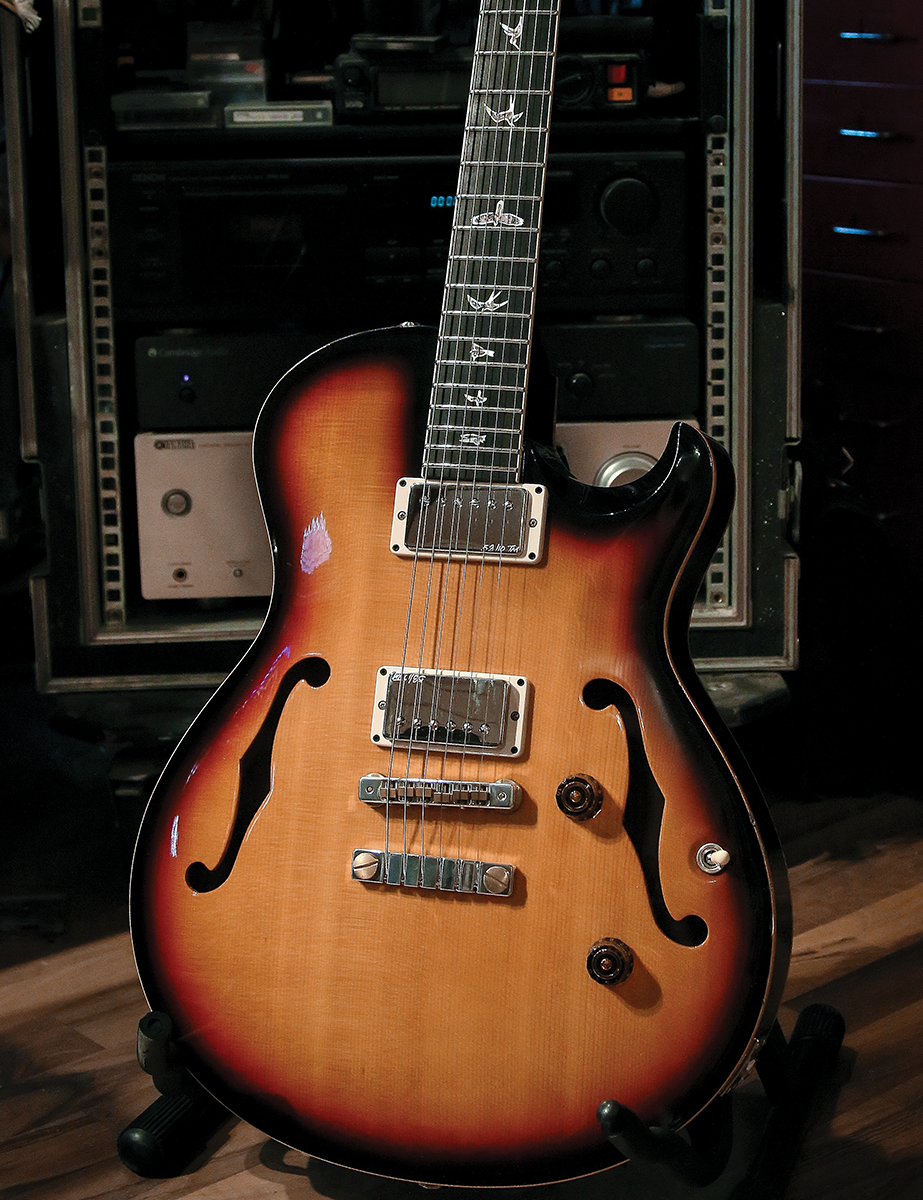 “I used my Fire Red Burst PRS Custom 22 on Lenny Henry’s recent album, New Millennium Blues. I didn’t want to use the face models, as it involved several TV appearances in a documentary. I’ve known Lenny for years, having written a lot of incidental music for his TV programs, and I’ve used him on my own albums for his deep low voice. I used this guitar with the new Kemper profiling amps. They reproduce the original amp you profile in so well, it’s hard to tell the difference in an A/B test.”

We ask Jakszyk about the ones that have got away. “I’ve had many a cool guitar over the years that have gone the way of paying bills, like so many professional players,” he laughs. “Some were big-bodied jazz guitars, which I needed not so long ago, so I bought a really nice PRS JA-15. As a modern, jazz-style hollow-bodied guitar, there’s a lot of vintage jazzy tones happening.

I use it in a band I have alongside King Crimson called Dizrhythmia, and on an album of the same name, that has an acoustic anglo-Asian feel, with Danny Thompson on double bass and some superb Indian musicians. 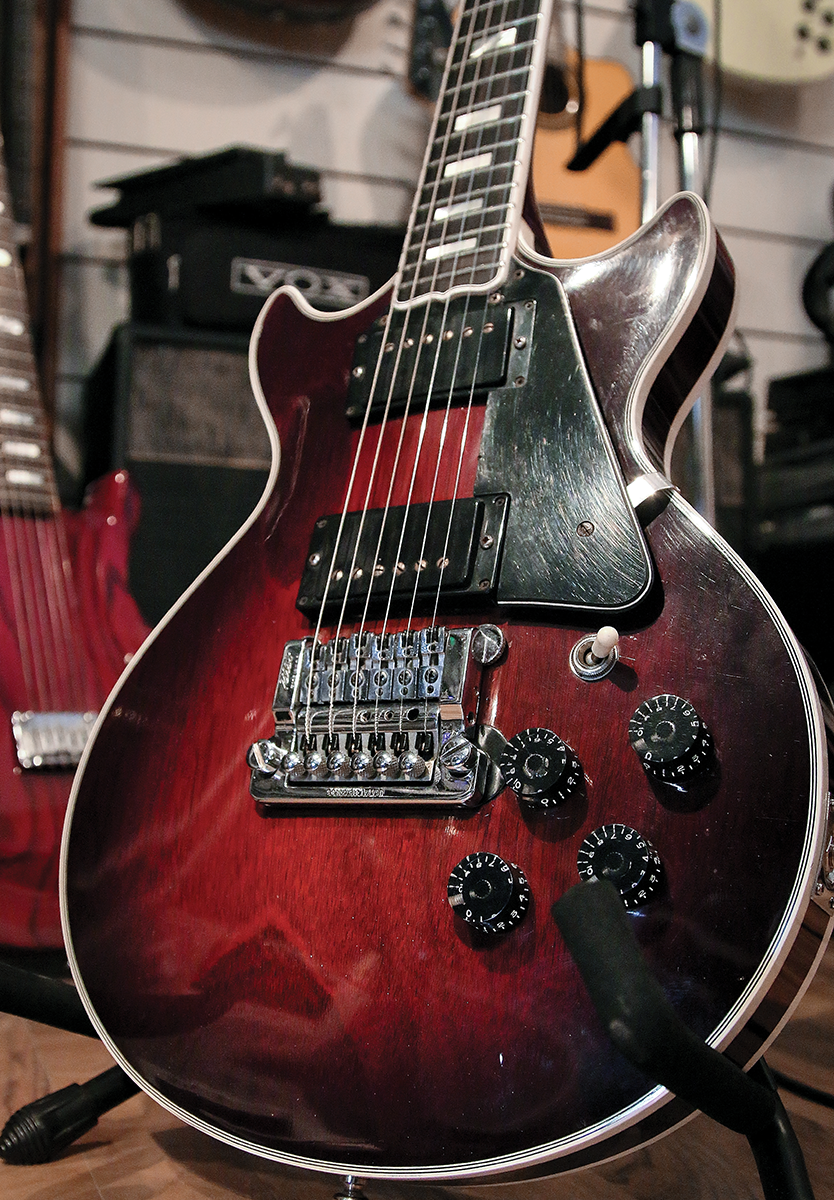 “I used a [Danelectro] Baby Sitar on Dizrhythmia as well, it’s a junior version of the Coral Sitar by Jerry Jones. I always loved the sitar on recordings, especially the solo in Do It Again by Steely Dan.

“Another I so regret selling was an Antoria copy of a Gibson ES-345. I still feel it was one of the best guitars I’ve had my hands on. I’ve owned several Gibson 345s but none of them have come close to the Antoria, maybe I’ll find another one day.

There are a couple of streets in Tokyo we try to aim for when we are touring there; it’s said to have more guitar shops per square inch than anywhere else in the world, but I haven’t seen an Antoria version there either. I feel the same about Burny guitars. I’ve had a few over the years; luckily, though, I still have my black LP-type, which I feel plays and sounds as good as a Gibson.” 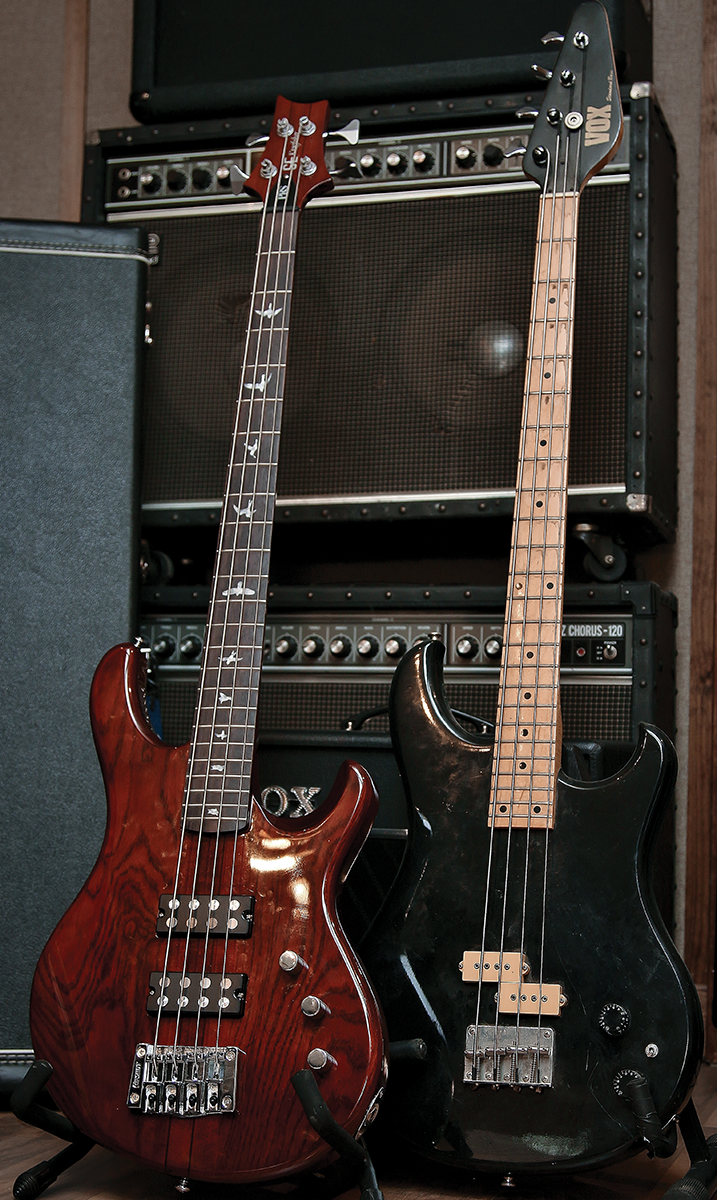 The next guitar we see is less polished, but has nostalgic significance for Jakko. “In the 70s, I had a band called 64 Spoons, in which I used a Yamaha SG with a bolt-on neck, but the bassist, who was a furniture maker, said I’d get more sustain if I had a guitar with a set neck. So we made a Frankenstein model out of a solid piece of mahogany. I missed that guitar after I sold it. One of the original members of the band tracked it down not long ago, and gave it to me as a birthday present. 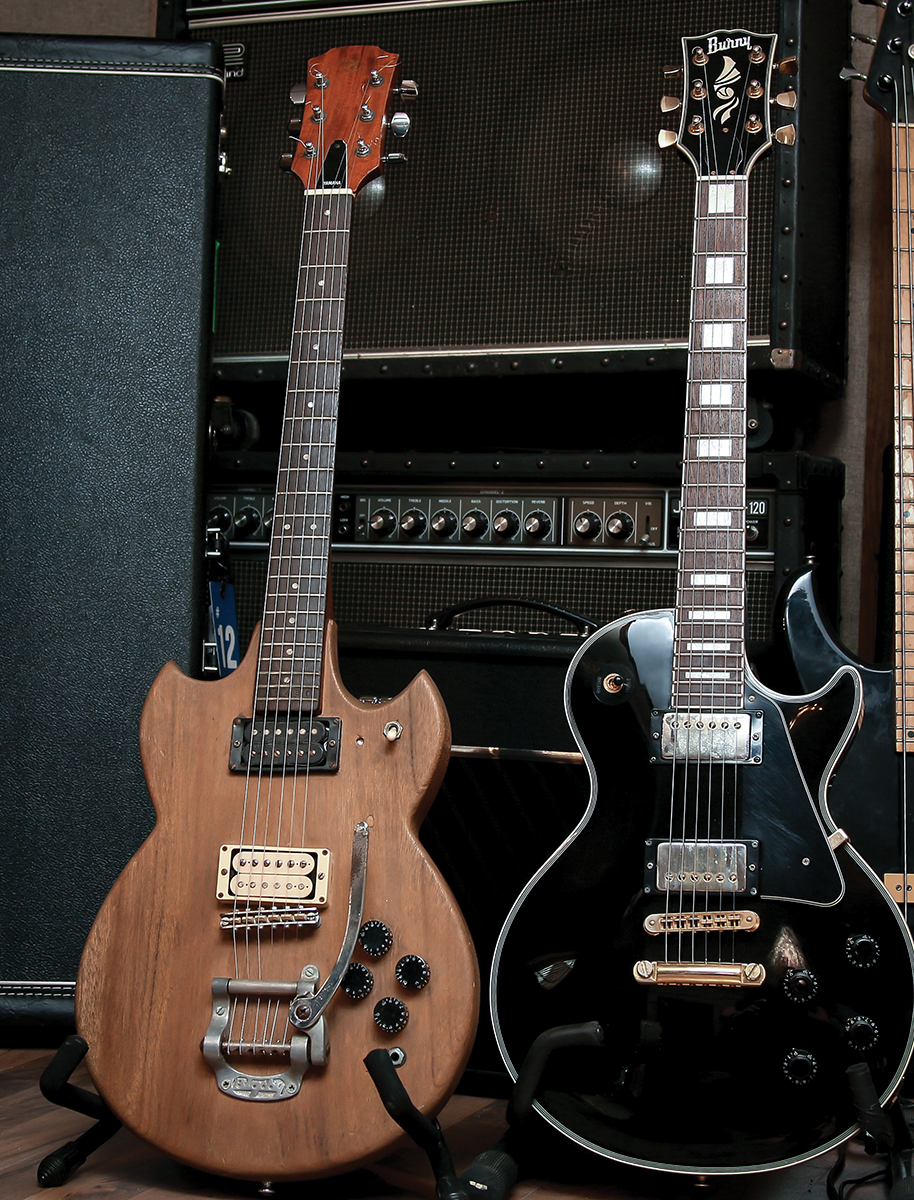 “I was wandering around the stalls at the Cambridge Folk Festival many years ago, where people were making and selling all kinds of crafts, and I came across a guy called Nigel Thornbury selling his own hand-built acoustic guitars. I was astonished how well they played and sounded. They were made to order, so I requested this small-bodied model, hand-built for me. I have a gorgeous high-end PRS Private Stock electro-acoustic, which is also on Dizrhythmia.

“I also have a gorgeous PRS Alex Lifeson Signature thinline electro-acoustic, which appears on Dizrhythmia too. It’s beautiful.” Jakszyk then harks back to his fusion roots with a ‘built-for-speed’ Ibanez. “I remember seeing Allan Holdsworth in ’74 at the Rainbow in London when I was 16. I hadn’t heard of him before, but he totally blew me away.

So I went out and bought the same amp and guitar, but of course I sounded nothing like him. I saw him playing in a pub in London with a borrowed Telecaster and an amp that was lying about, and he still sounded like Allan Holdsworth, then I realised it’s all in his fingers and his head. 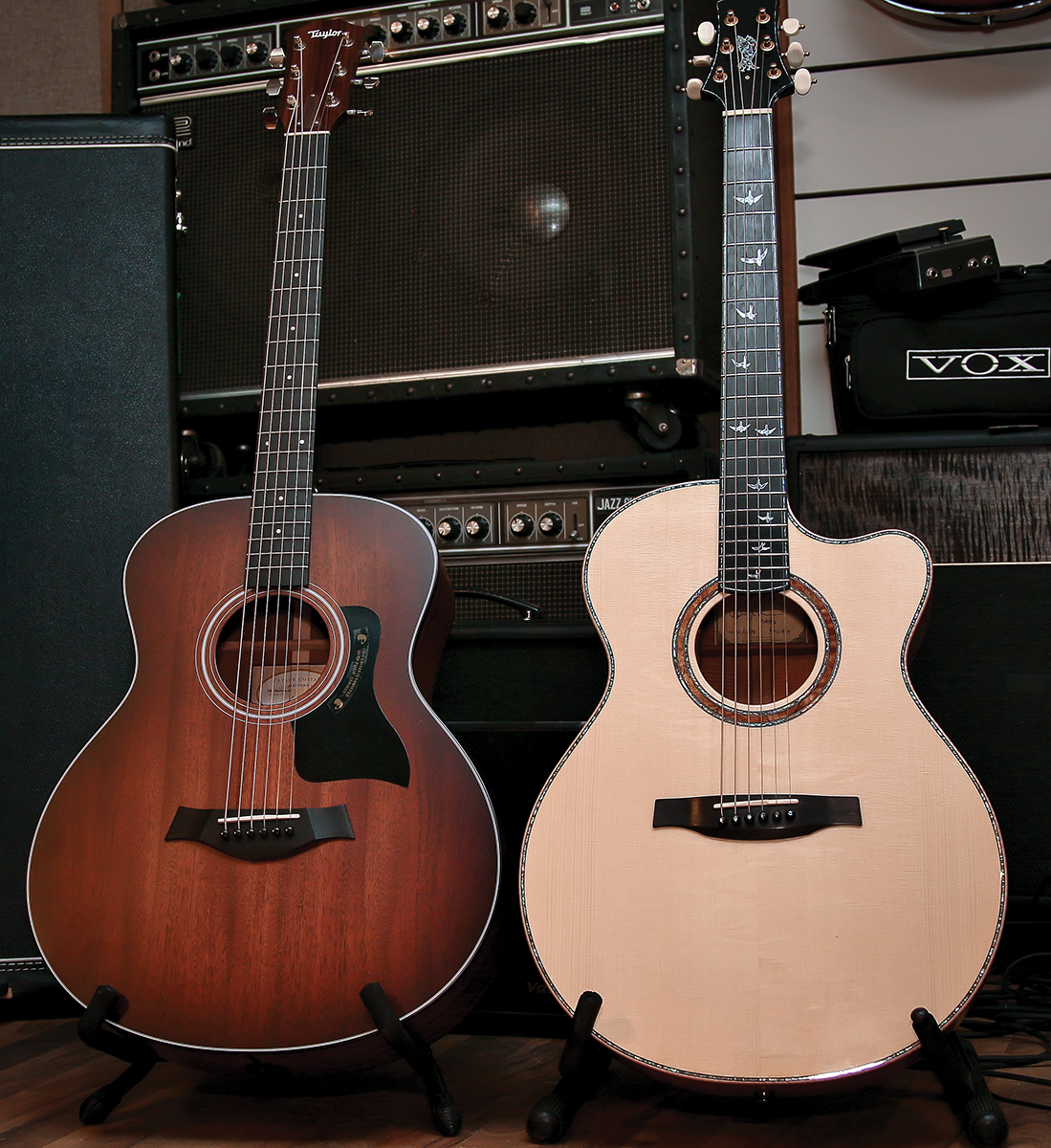 “I have an Ibanez AH-10 Signature model. With a low action and flat fingerboard, it’s certainly built for speed. I used it on a lot of sessions, it sounded so good straight into an amp. I was still a teenager when I got to know Allan and I would practise at his house, well, more like him soloing over me playing rhythm.

Years later, I bumped into him again when I took over from him in Level 42. Here I am, the youngster he knew from way back, now taking over his job. It was a very weird moment, but we’ve met several times since and he’s a very sweet guy. 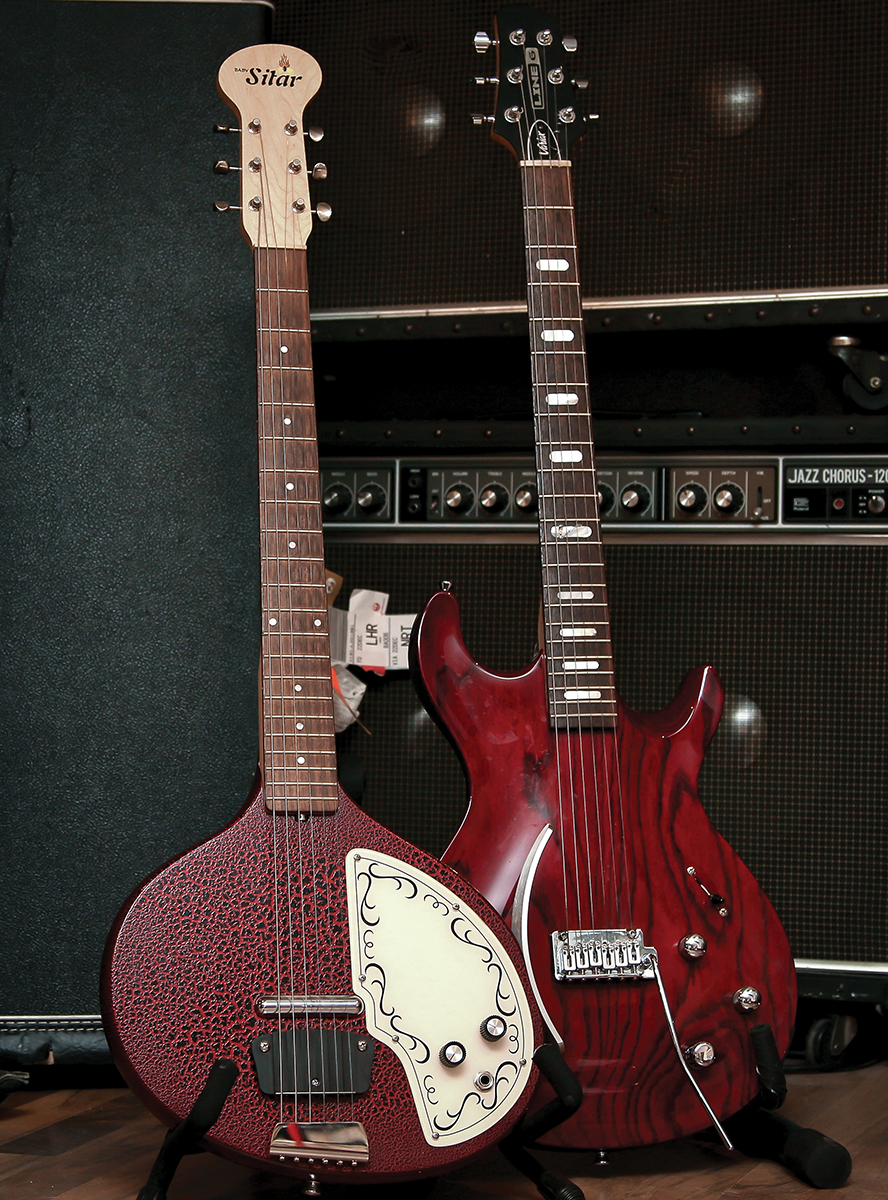 “I loved that early Genesis guitar sound as well, especially Mike Rutherford and Steve Hackett, that big 12-string sound. I can’t remember where I bought my 80s Aria Pro II Rev Sound, but it was so much easier to play than all the other electric 12s I tried. The build quality is excellent, and it’s quite a rare model now. 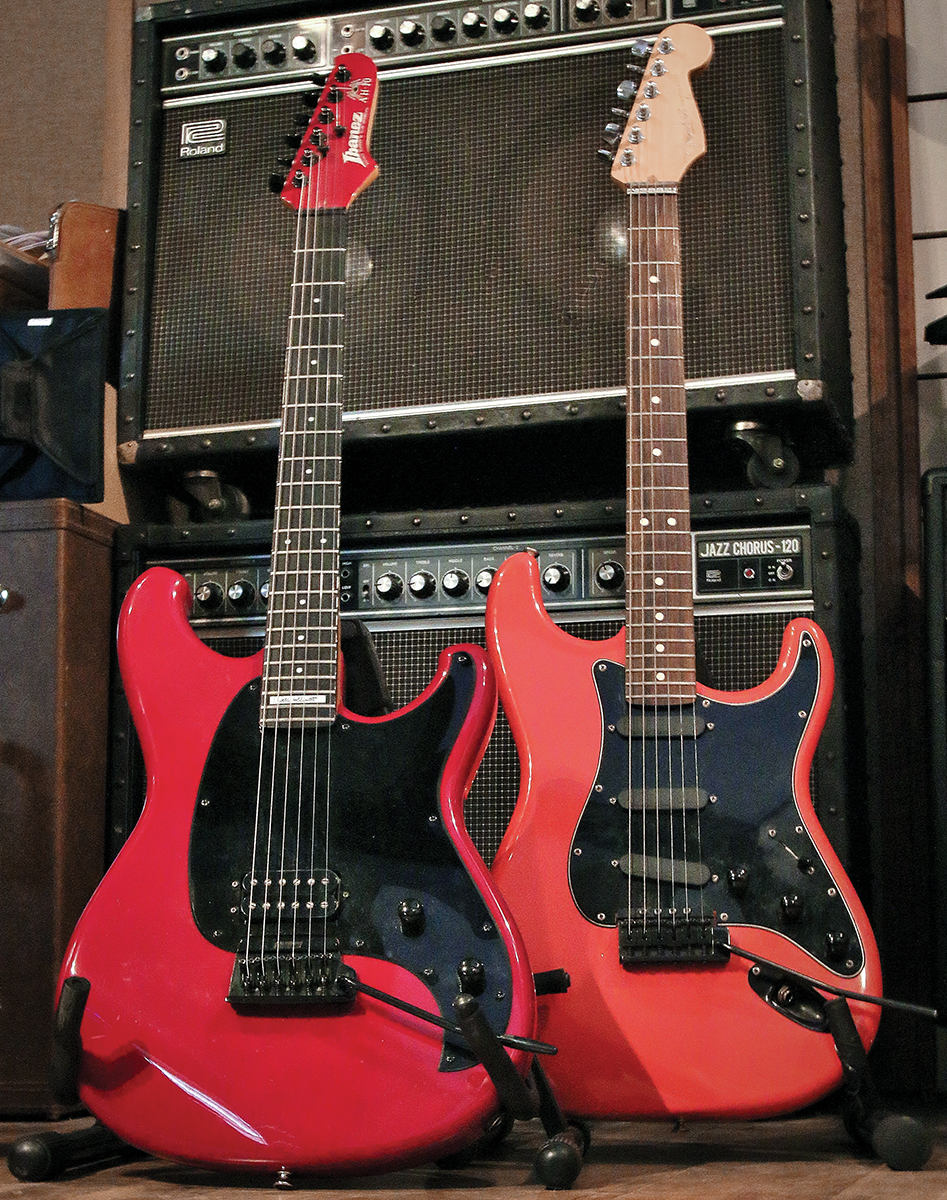 “I’ve had several Gordon Smith guitars, which I also foolishly sold over the years. I realised how good those guitars were and found an early-80s Gemini model on eBay. It had been withdrawn, as nobody was interested. I couldn’t believe it, I called the guy up and made an offer. It’s a classic guitar.

“The Line 6 Variax 700 has been invaluable in the studio. I’m not that fussed about it just as a guitar, but its modelling abilities are extremely useful when I need to thrash something down pretty quick. Like I mentioned, I’m using the Kemper modelling amp live, which for me almost goes full circle back to the days when I would use amps at high volumes to try and get jazz, fusion and progressive rock sounds without any floor effects. 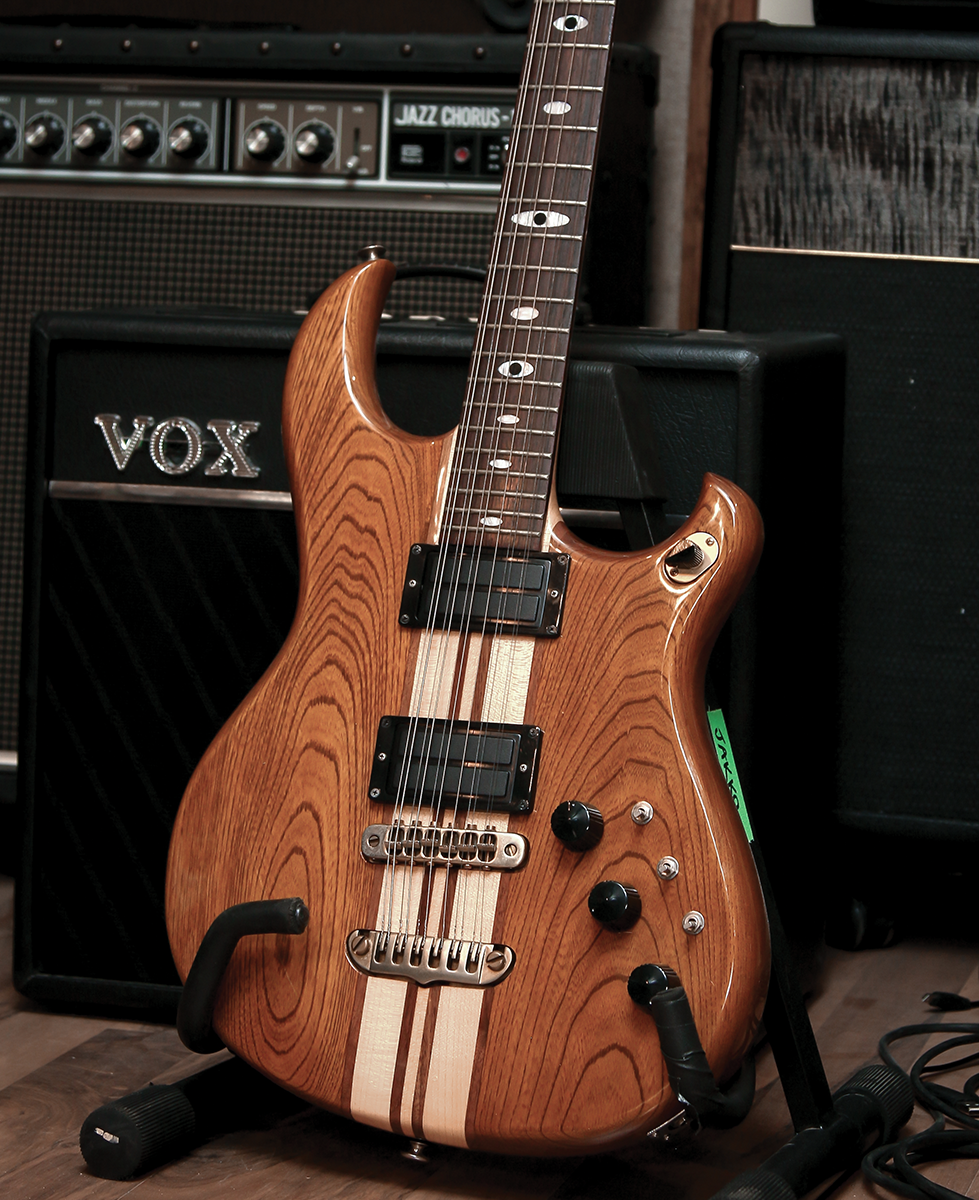 “We were rehearsing Sailor’s Tale recently, from Islands, and Robert Fripp commented on what a great sound I had. I explained it was one of the Kemper’s built-in presets, called ‘Early Fripp’.”