As a member of Britpop band Cast, who also works with Led Zeppelin legend Robert Plant, Liam ‘Skin’ Tyson has built up quite a guitar collection. 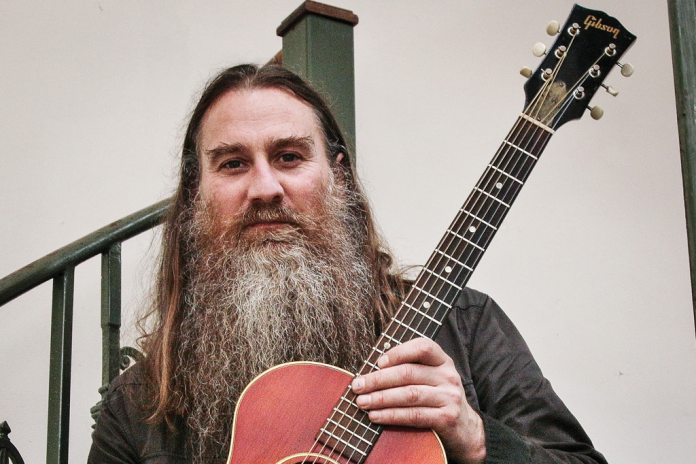 “It’s full-on at the moment, as I’m back-to-back touring and recording with Cast and the Sensational Space Shifters with Robert Plant, who I’ve been working with since 2005,” explains Liam ‘Skin’ Tyson, guitarist with the Liverpudlian Britpop act and former Led Zeppelin legend’s bandmate. “My guitar trunk with Robert is pretty full, with around 18 guitars, while Cast calls for about seven or eight, which I use in both bands.

“More than once, I’ve had to think in which part of the world some are stored, so I’ve had to double up on quite a few, like my ’72 Gibson Les Paul Signature for example. 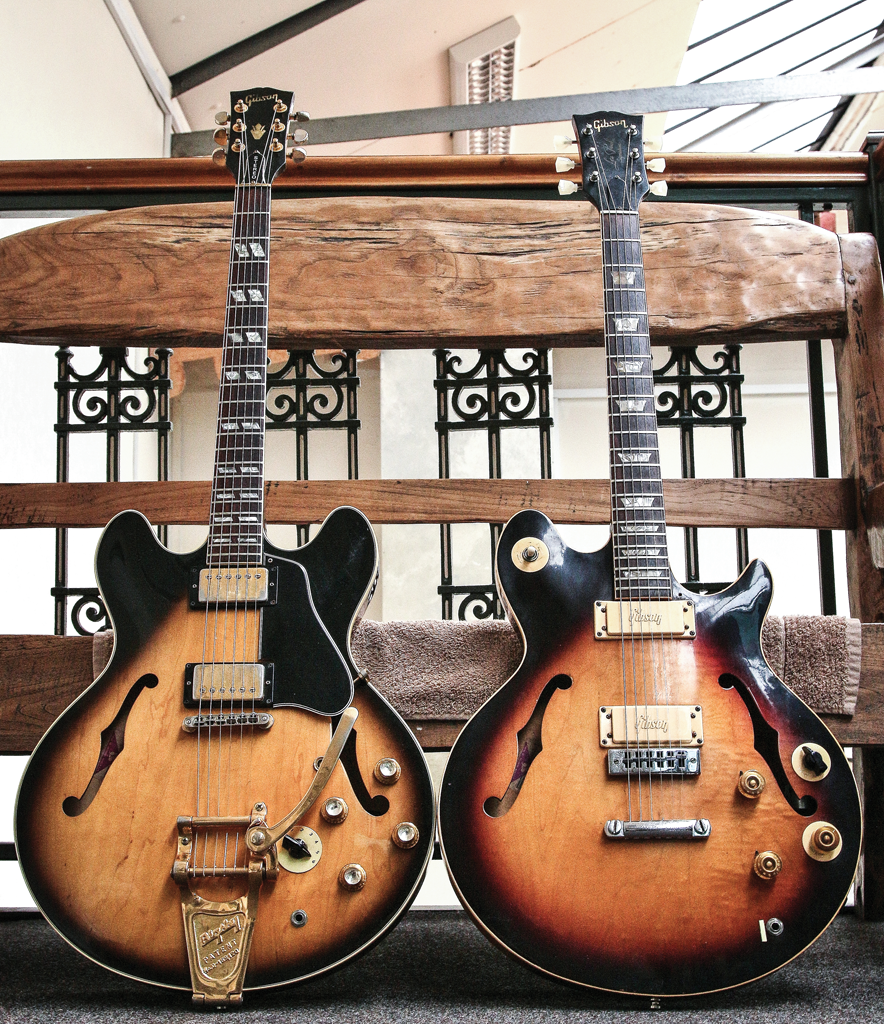 “That guitar has been one of my favourite electric guitars for both bands for a long time. When the Sensational Space Shifters toured the Deep South of the USA in the Spring, we played some of the big venues and some places that nobody had ever played before, and I was really pleased when I found another from the same year, also in Tobacco Sunburst.

“I love the way the switching offers so many great sounds. I can play out of phase, or sound like a Strat, or rock up a little, but not quite as much as a Les Paul, and the necks are so comfortable. It was quite a find, as very few were produced around that time in this finish – I believe only three in ’70, moving up to a mere 75 samples in ’72.” 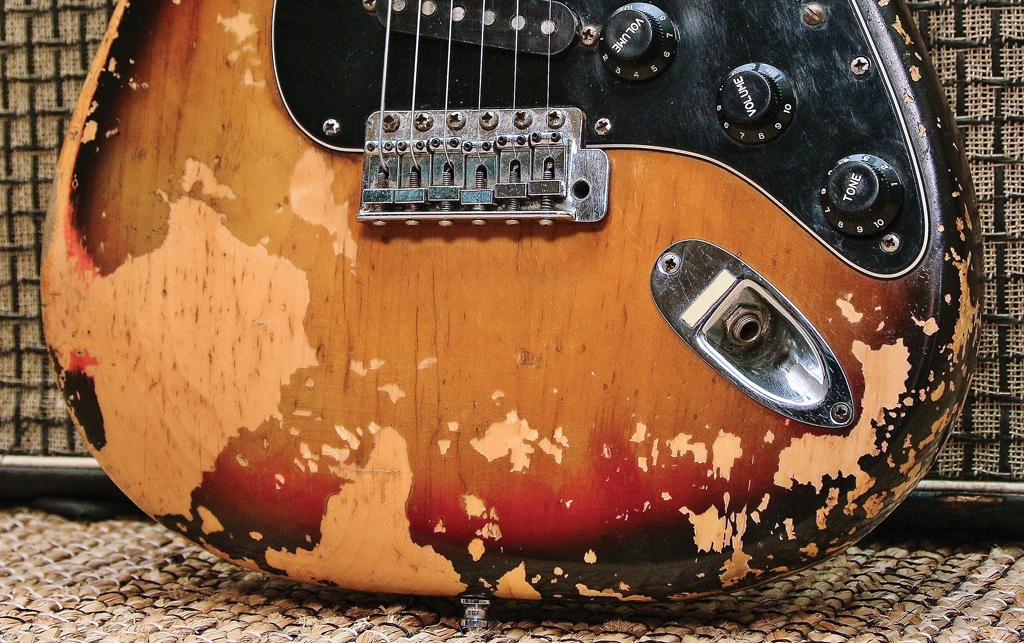 While Skin is partial to a big semi-acoustic, he’s also often seen playing many of his handsome solid-bodied guitars. “My faithful ’72 Strat is always close at hand for live and studio work,” he says. “I’ve had it for about 20 years now. The distressed look is purely natural after a life of hard gigging, with me travelling literally around the world. While it was one of my number ones in Cast, I now use it mainly with Robert, so I’ve acquired a few more Strats for Cast. I’m not that critical about rosewood or maple fingerboards, it’s whatever sounds good at the time, really. 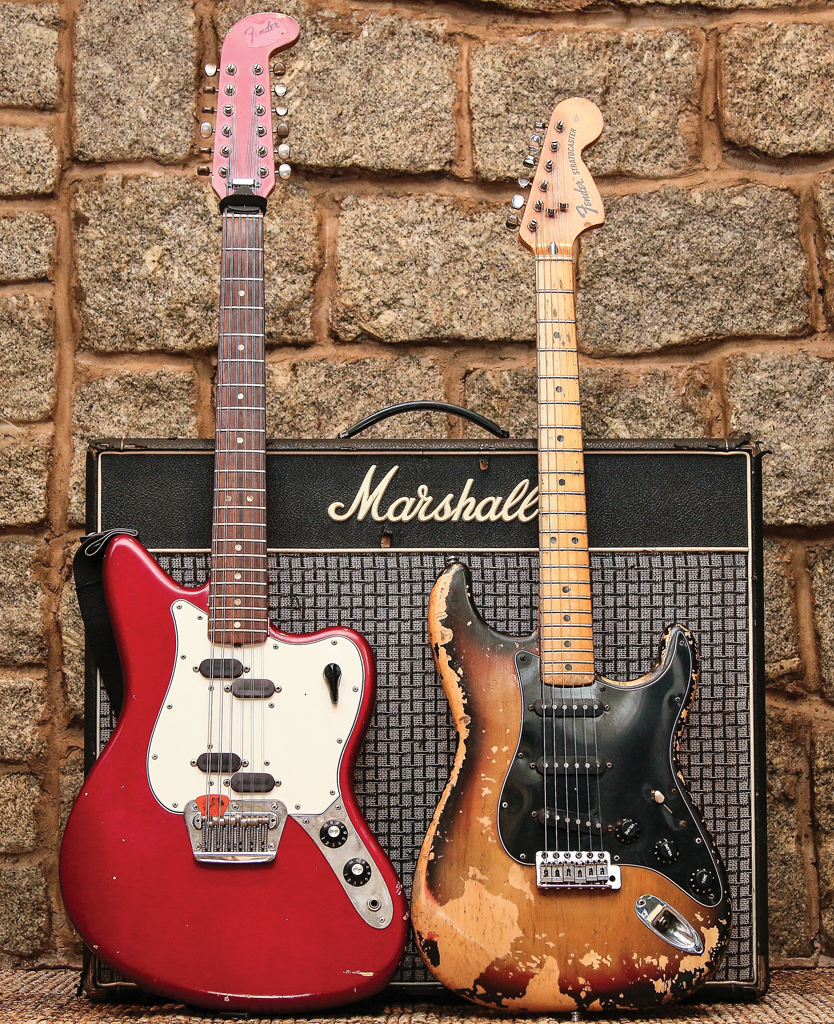 “There’s also a call for decent electric 12-strings in my collection, and my Candy Apple Red Fender Electric XII is perfect. A pal found it for me in Nashville. I’ve used it a lot during the three years I’ve owned it; it’s ideal if the Sensational Space Shifters do Led Zeppelin’s Thank You, for example. I have to carry enough guitars for all the songs we cover, although if Robert decides to do a Led Zep song, I won’t do a Jimmy solo, it’s always a different arrangement to the original. If we play Whole Lotta Love, it’ll have the same riff of course, but it will be a different arrangement. 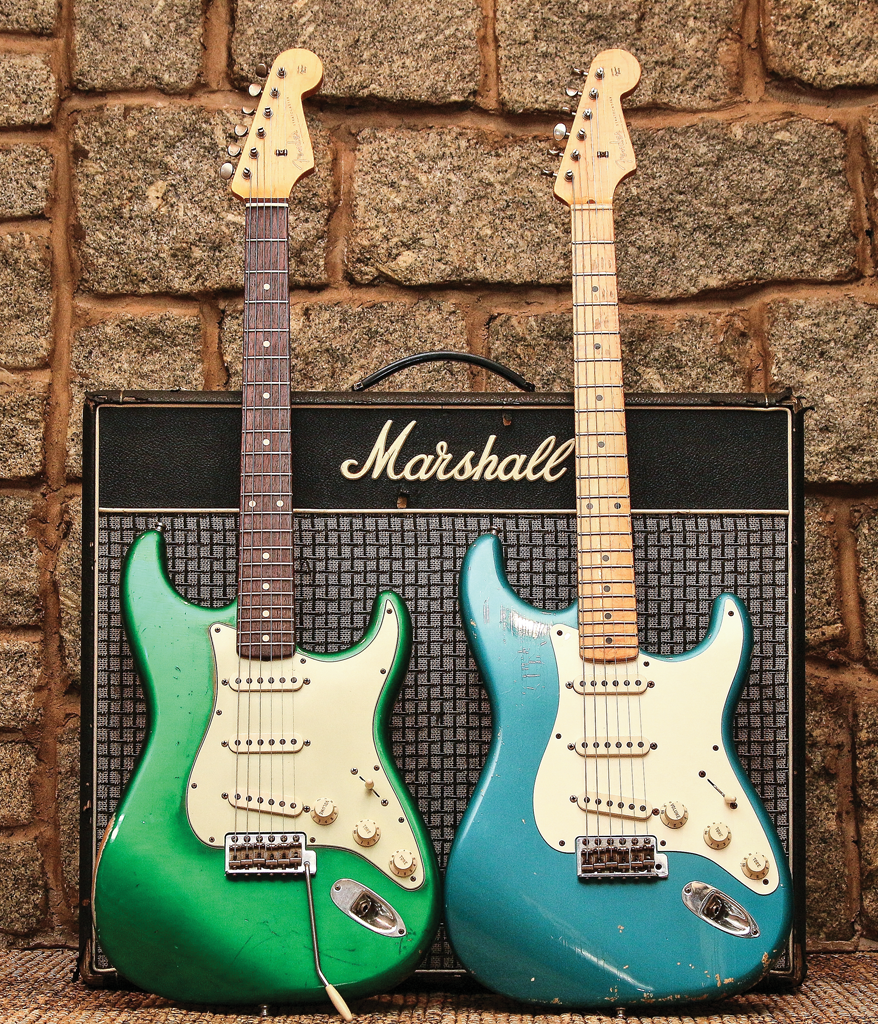 “In the early days of Cast, before we had any advance from the record companies, I just had a Gibson ES-335 and a Goldtop. I couldn’t really decide which was better for the band’s sound, a guitar loaded with humbuckers or single coils. Luckily enough, I had the chance to try out some amazing alternatives, as the band had access to John Entwistle’s private guitar army – needless to say, I was in guitar heaven. He had them all. I was there playing guitars once owned by so many great players, from The Everly Brothers to Jimi Hendrix. 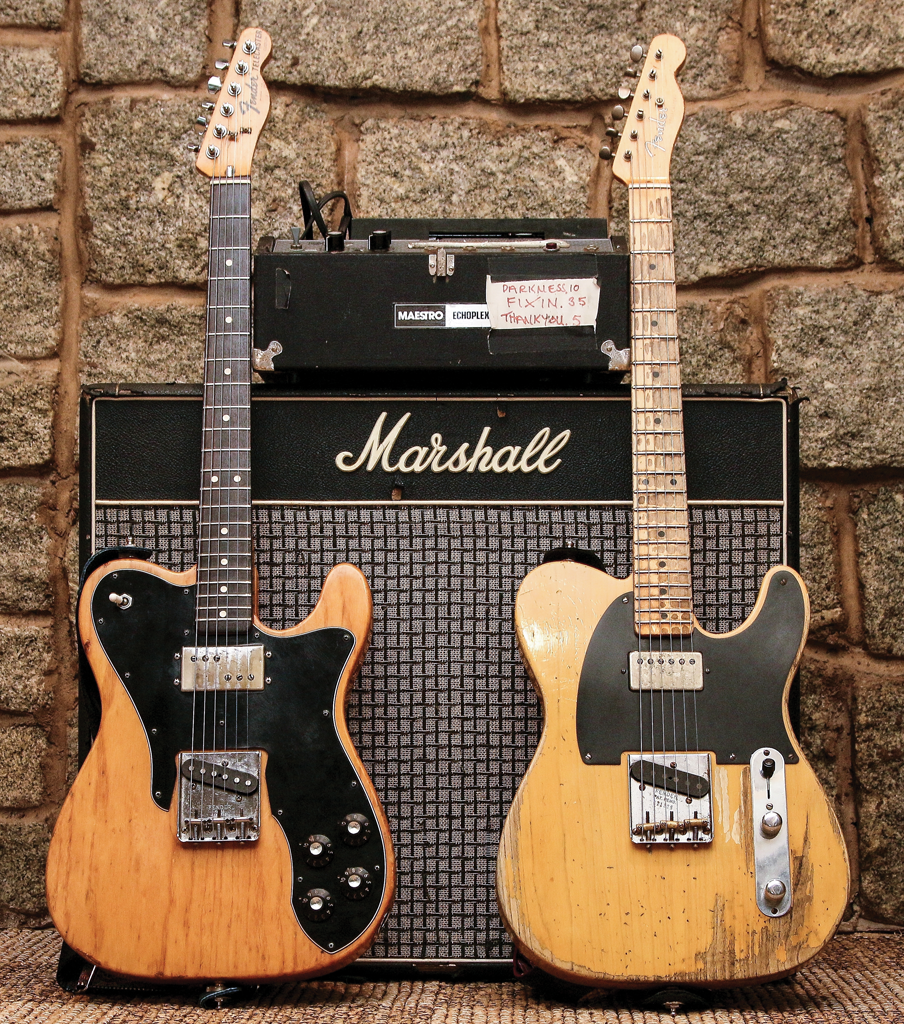 “A ’72 Tele Custom was one of the first of several guitars I bought when Cast were signed. It pairs up nicely with my custom ’52 Relic reissue, which I bought at the Fender Custom Shop. I actually cleaned this one up a bit, as I thought it was a little too distressed. It’s darker sounding, but I’ve grown to like it a lot. Again, it was a case of doubling up on the guitars, as I was using the ’72 in both bands, so they are investments for the work I’m doing. 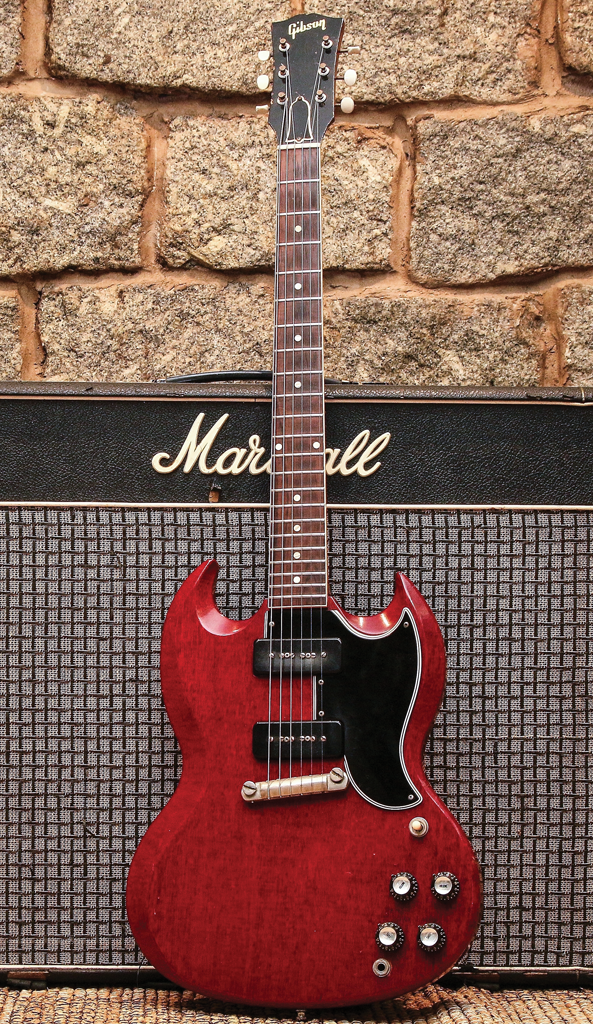 “The output from a Tele is ideal for so many situations, but if I need to beef it up a little I’ll use my SG Special. I’ve always wanted an SG after seeing Robby Krieger of The Doors with one. Mine is a ’61 model in glorious Cherry Red, which I bought in Chicago last year. I used it the same evening as I bought it with Robert, and I also recorded with it on the new Cast album, Kicking Up The Dust. I’ll always know it’s mine, as someone in the USA etched their driving licence number on the back.”

The Sensational Space Shifters are renowned for a twin-guitar mix and their slant on authentic-sounding traditional blues guitar, as Skin explains:

“Justin Adams and myself work really well on stage. He has a nice old ’52 Goldtop with P-90s and a trapeze tailpiece. When we do the bluesy walk-up to Whole Lotta Love and he’s playing by himself with just Robert, you can really hear the early days of Memphis in that guitar. For a bigger sound picture, both live and in the studio, we generally use different guitars between us, but we’ll often go twin-lead with a pair of Goldtops. 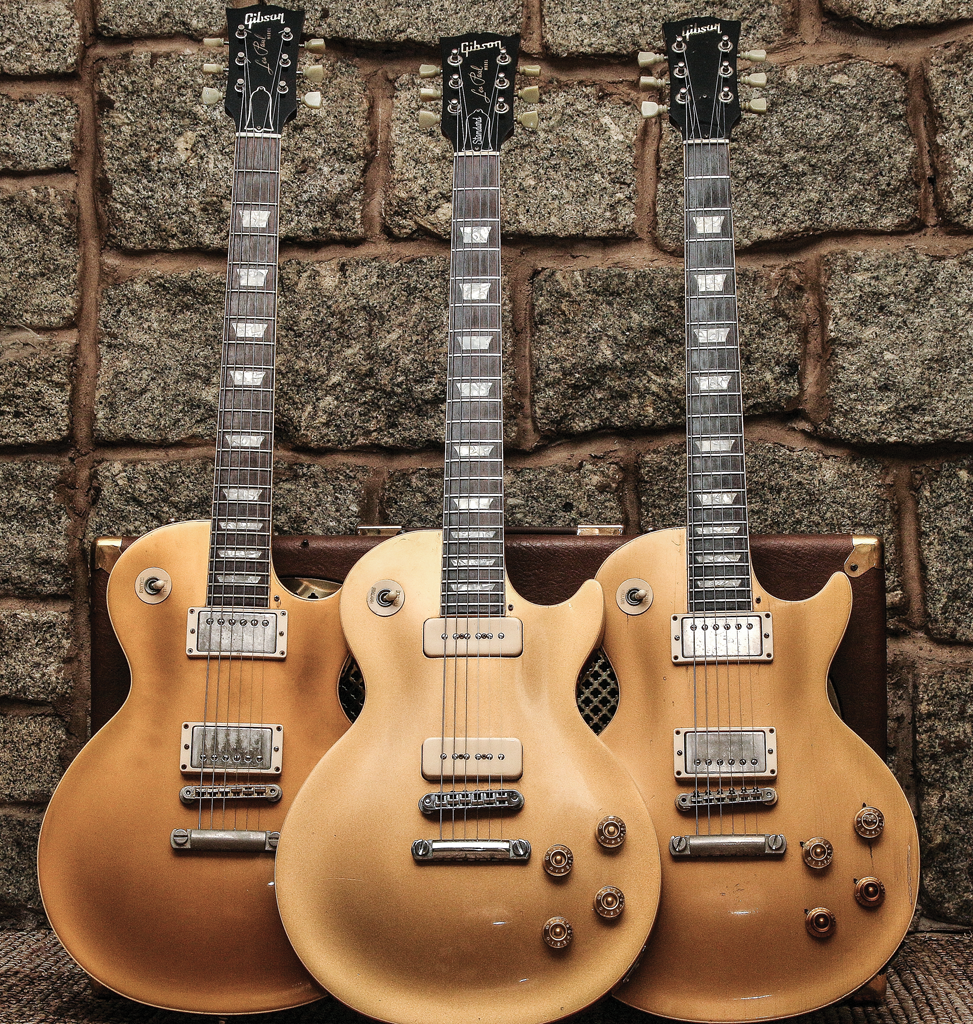 “I have three Goldtops, all from the 90s. One’s loaded with a pair of hot P-90s; it was another guitar I acquired when Cast got their record deal, and was my number one for ages, and I’ve got a pair of Heritage ’57 reissues.

“I wince when I think back to how I treated one after a tantrum years ago. I was in the studio in the very early days of Cast, and the monitors were playing up. I got so annoyed that I jabbed one with the guitar and the headstock flew off. Back in the dressing room, I was so upset how I treated it, I threw it in the corner of the room, it bounced out of the window and landed in a crumpled heap in a car park two flights below. But it’s fine now and plays and sounds really nice. I have a lot of respect for that guitar, which I use a lot on stage. 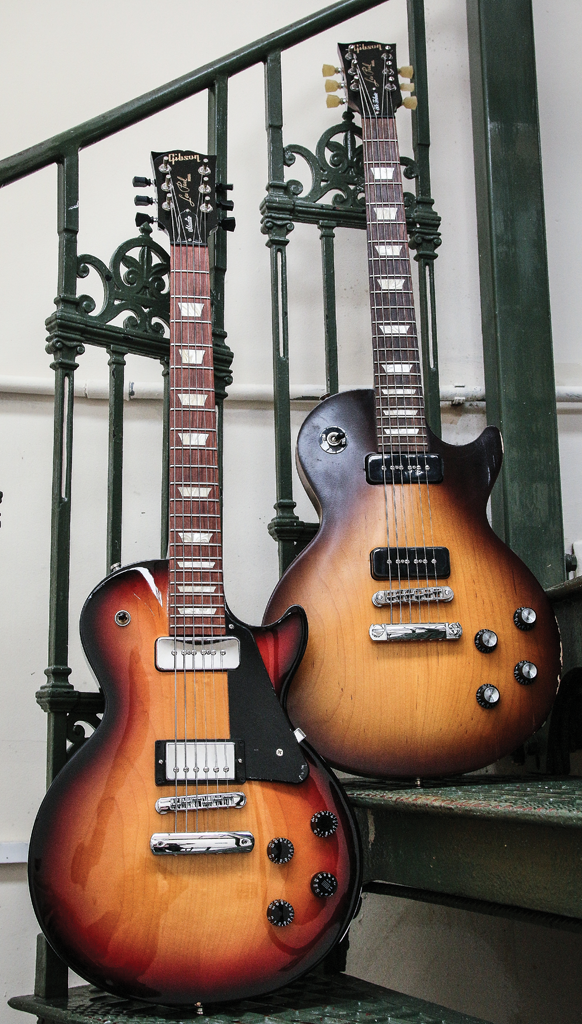 “As a studio guitar, my Gibson Robot Les Paul Studio works really well, with all the onboard electronics. I used it with Robert on the Lullaby And… The Ceaseless Roar album, and it looks nice in the limited Chameleon Fireburst finish.”

Before turning to a hoard of big-bodied acoustic guitars, Skin shows off a cool three-quarter size. “I love this little Gibson LG-2 three-quarter-scale acoustic,” he says. “My young kids, Osian and Guto, used it at the Eisteddfod Yr Urdd Welsh music and poetry festival. Osian used it to play Stairway To Heaven, and Guto to play a Spanish classical piece. 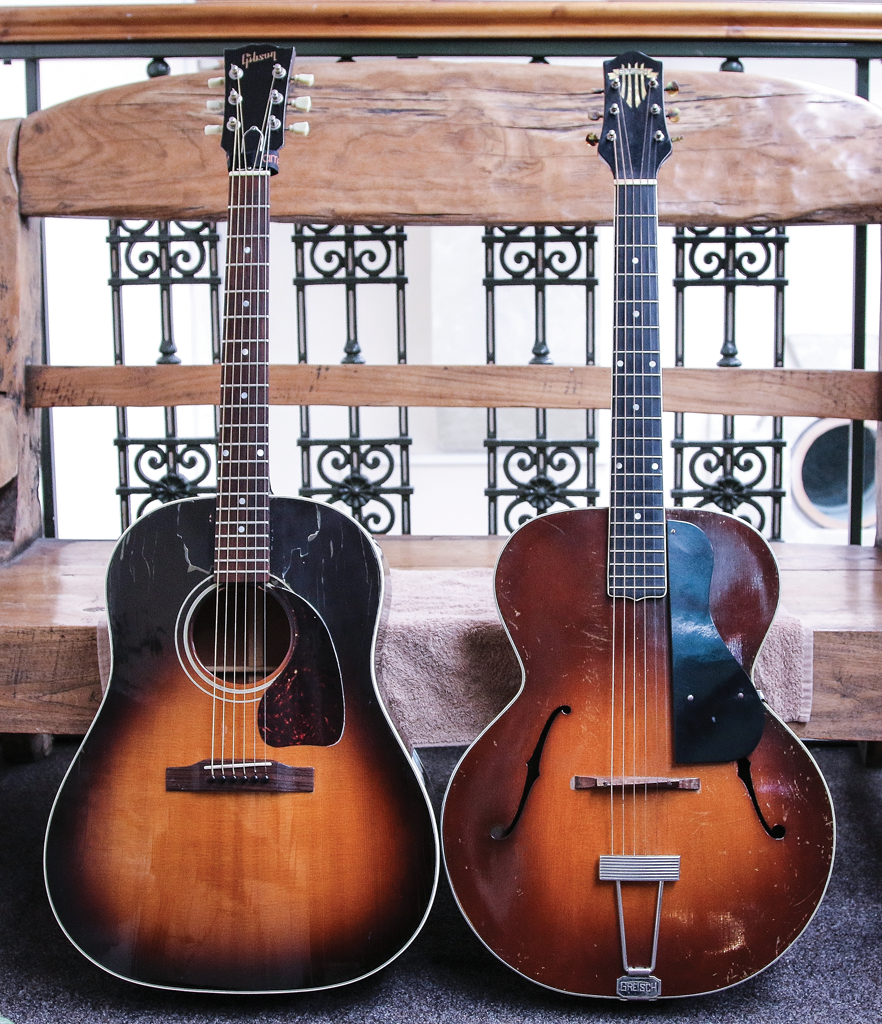 “I have several big-bodied acoustics, and all are favourites that serve a purpose, including my Gibson J-35, which I used on an album called Inside Outside by the Belgian band Novastar. But I must say my number one is a Gibson J-45. I call it Snappy, as the headstock has been snapped off more than once, but I have to say I wasn’t responsible for any of them.

“I don’t really have a favourite electric or acoustic guitar for writing. I’ve penned many songs with Robert from way back to ’05 in his Strange Sensation band. He’s always writing down lyrics, and often I just send him a track to work on. Dancing In Heaven is a fine example, which I wrote on my 70s Martin 12-string. 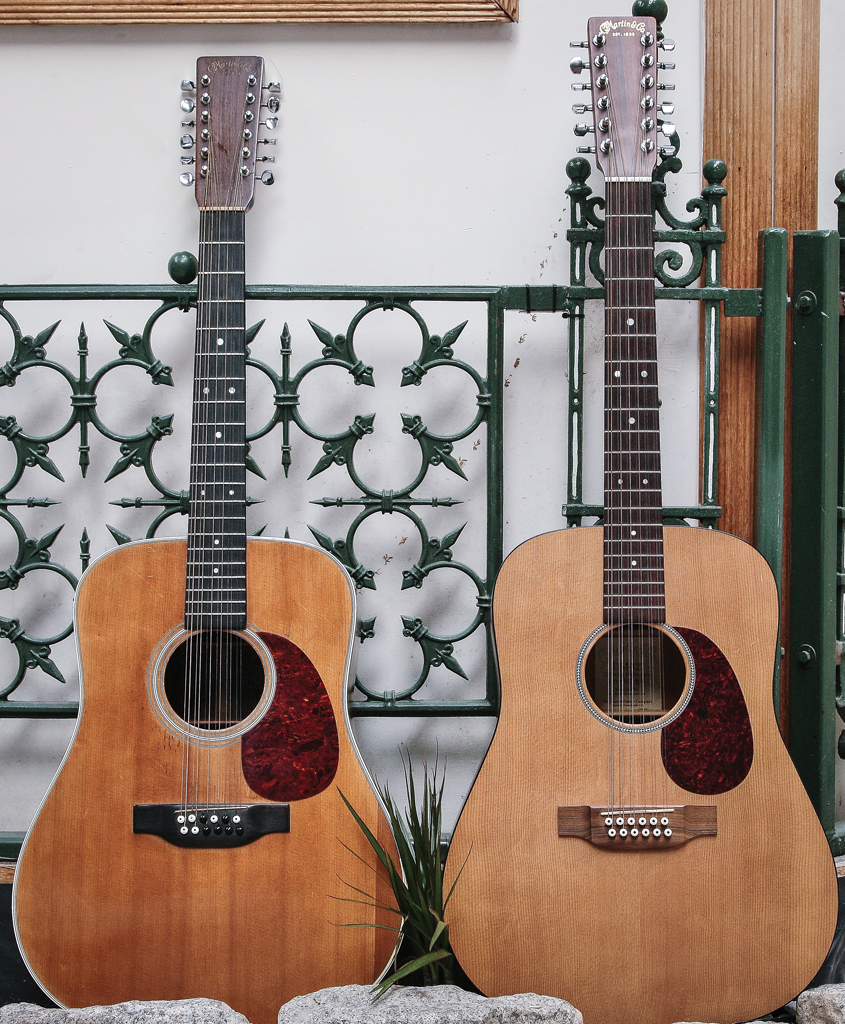 “I wrote All The King’s Horses on my Martin Heritage six-string. It’s actually lucky to have survived another of my guitar mishaps, although nothing to do with me this time, it was in the lap of the gods. The Sensational Space Shifters were onstage during a soundcheck at a festival in Philadelphia, when a freak gust of wind blew my guitar rack of 18 guitars off the stage. Luckily, it was the only one damaged, and the repair is hardly noticeable. 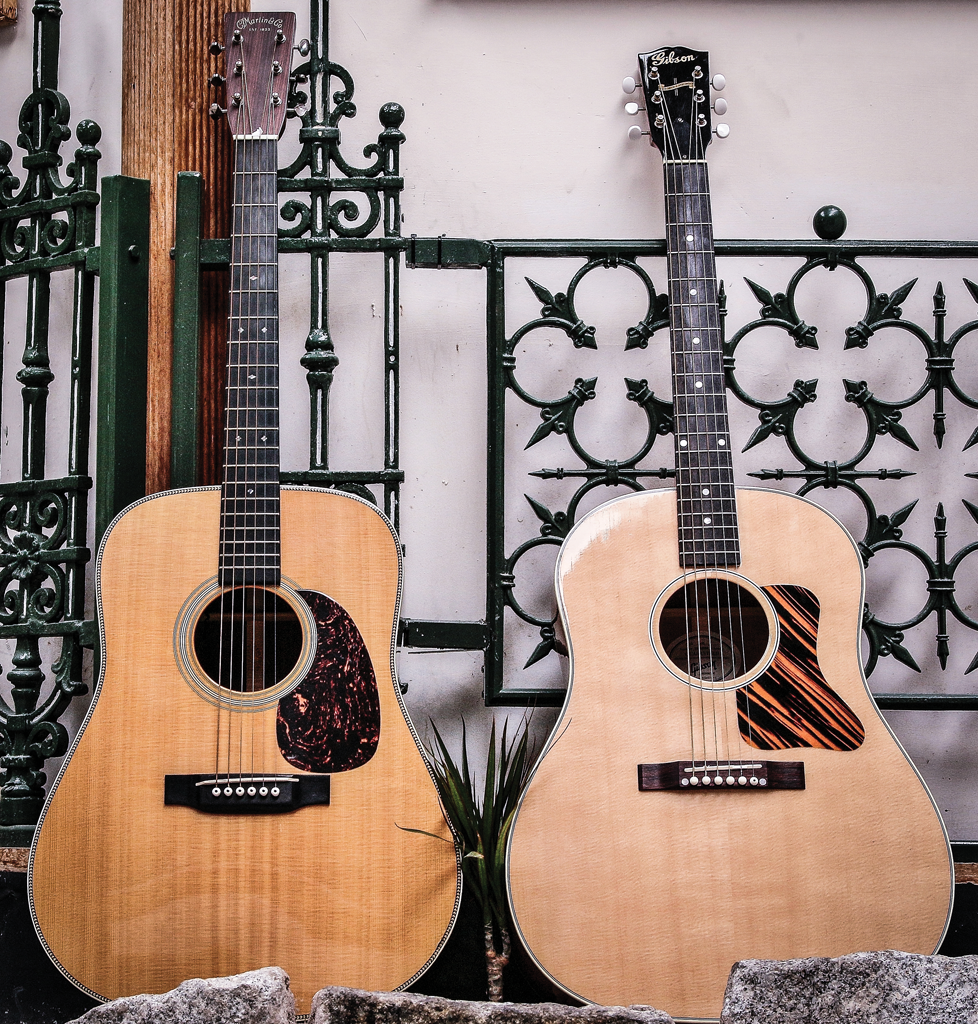 “My style incorporates the use of a lot of echo and repeats. On the Cast album, I used a pair of Echoplex machines in stereo. I heard a comment that it was like being chased by a ghost. 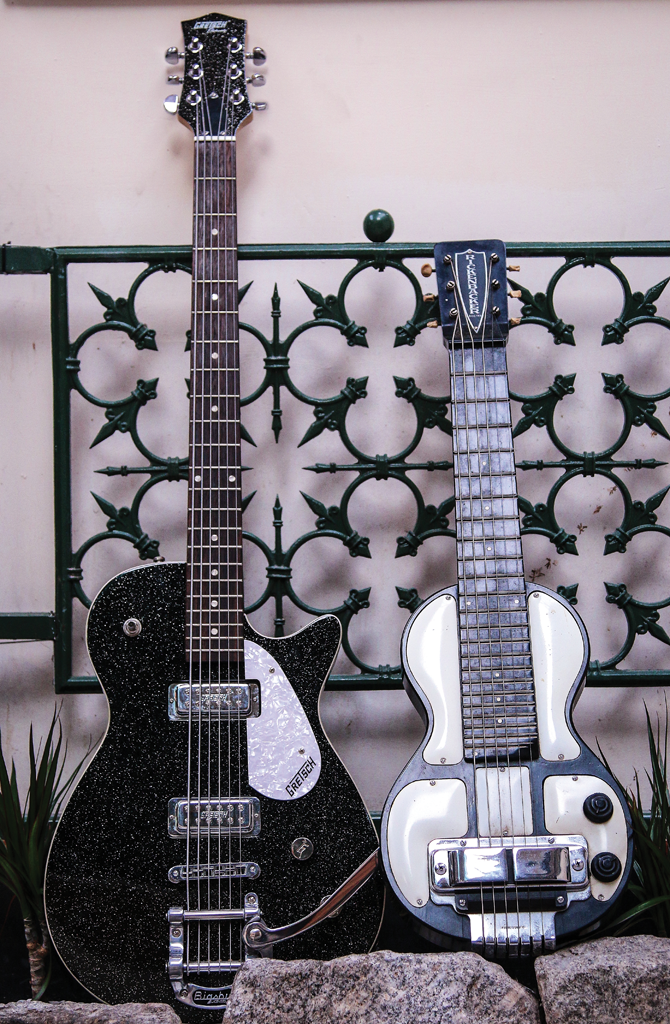 “I’ve been using Hiwatt rigs for years, it’s the clean headroom that works for me, as I also use them for acoustic guitars, and they handle the low end really well from my Gretsch G5265 Jet Baritone. They’re also ideal for my old 60s Rickenbacker Electro lap steel. I’m thinking of taking it on tour instead of my Sho-Bud Pro 1 pedal steel.” 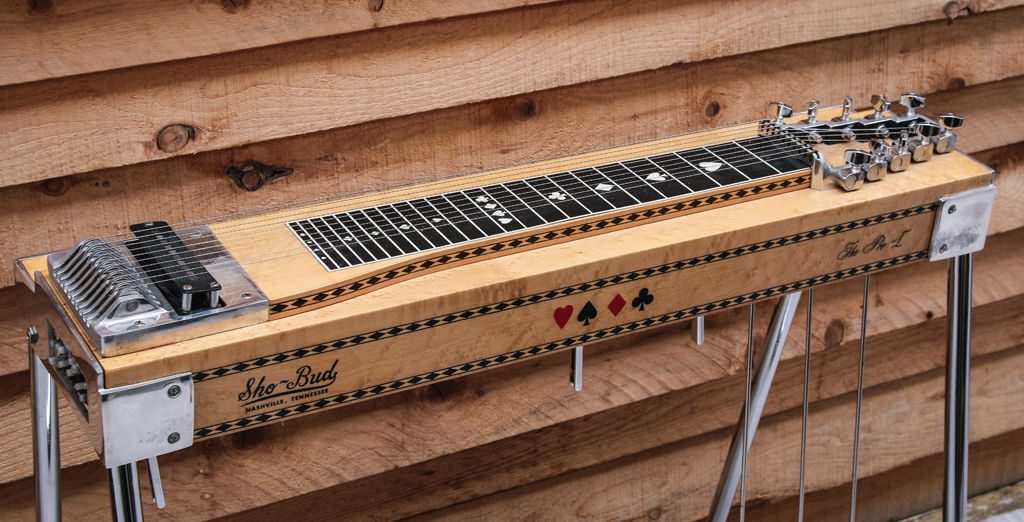 While both of Skin’s current bands call for some adept fingerpicking techniques, a cherished old plectrum provides him with a fond reminder of his youth. “Like so many guitarists, Hank Marvin and Bert Weedon were huge influences for me,” he recalls. “I still carry my Bert Weedon plectrum from the Play In A Day book in my wallet everywhere, just in case. It’s like the original ‘Pick Of Destiny’.”