Malcolm Lindsay’s TV and film career has been a creative journey. However, as G&B finds out, the project to build his dream guitar could be his most remarkable yet. 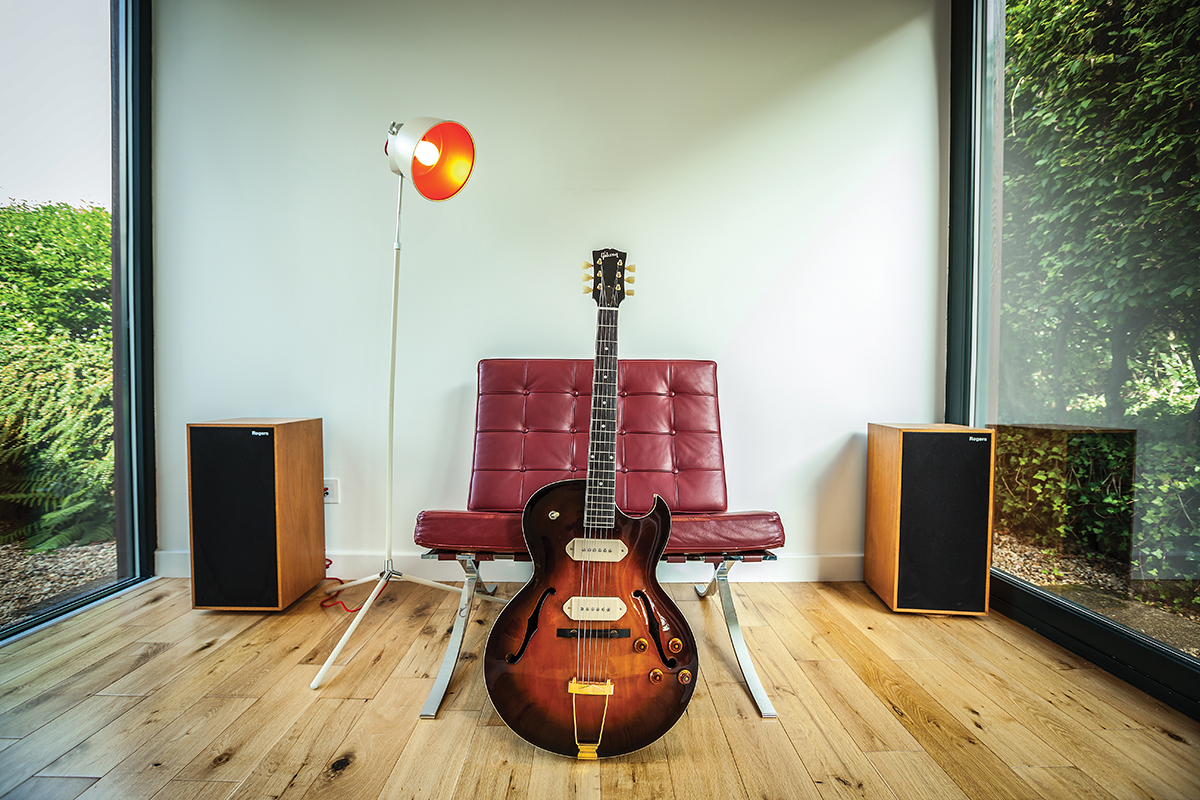 There comes a time in every guitarist’s life when they consider building their own dream guitar. For some, it goes no further than a doodle on the back of an exercise book. For others, it becomes a life-long ambition. Thankfully for us, Malcolm Lindsay falls into the second category. 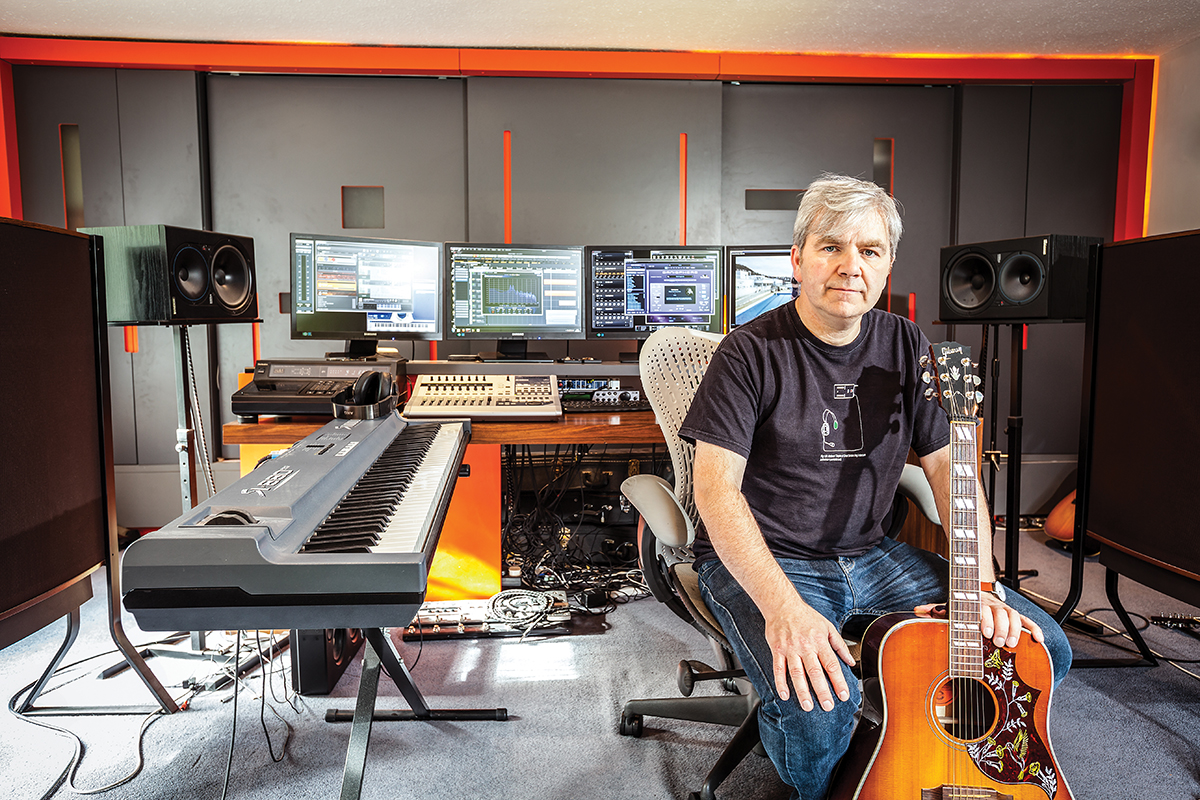 Lindsay in his studio with his Gibson Hummingbird

Based in the leafy suburbs of Glasgow, Lindsay has forged an award-winning career as a TV and film composer. His film scores include My Nazi Legacy, Young Adam (on which he collaborated with David Byrne), Penny Woolcock’s highly acclaimed Exodus and 16 Years Of Alcohol. In TV land, his soundscapes have illuminated numerous projects, including Taggart and Whitechapel. His stylish, contemporary home is awash with musical references; from the baby grand in the lounge to a small glass-walled annex in which a record player resides, along with two comfy chairs and a pair of Rogers monitors, which Lindsay proudly explains are genuine BBC studio monitor speakers.

In his own studio, four LCD screens look down on a keyboard, mixing desk, computer keyboard and video player. In the corner, a Laney amp hums gently. Along one side of the otherwise bare room are Lindsay’s guitars, with Gibson being the dominant marque. As if that wasn’t impressive enough, sliding wall panels behind his expansive desk reveal yet more of his collection. This is where the special ones live. 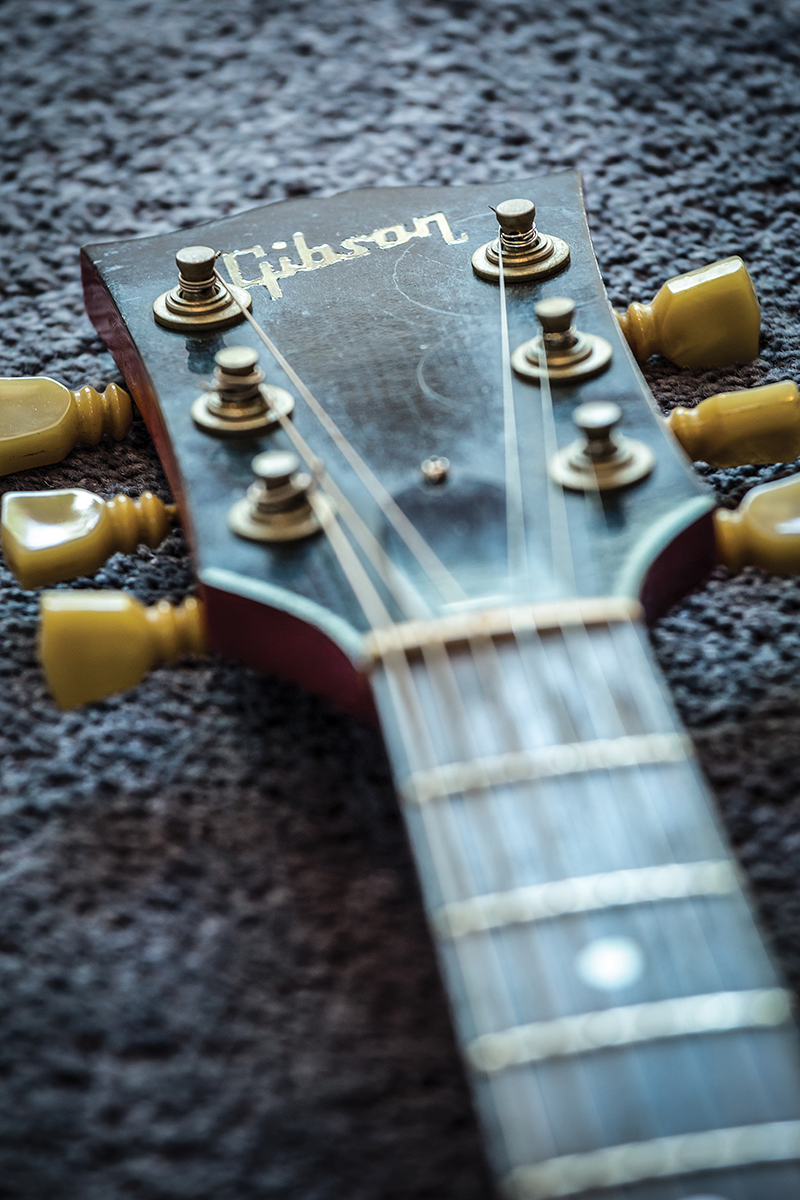 During his 15 years as a professional composer, Lindsay has amassed a guitar collection that spans the decades. For instance, he has a particular liking for instruments from 1966, which he says is just a happy coincidence. But while his obsession has reached a peak with his very latest additions, it hasn’t always been like this.

“I wasn’t allowed to buy my first guitar until I passed my grade five in piano. I wasn’t particularly good at piano, so it took me a long time,” he says modestly. “But as soon as I got my grade five, I chucked piano and bought my first guitar. Shortly after, I saw Gallagher & Lyle, and thought they were astonishing – fantastic harmonies and surrounded by instruments. At the age of 15, I decided that’s what I wanted to do.” 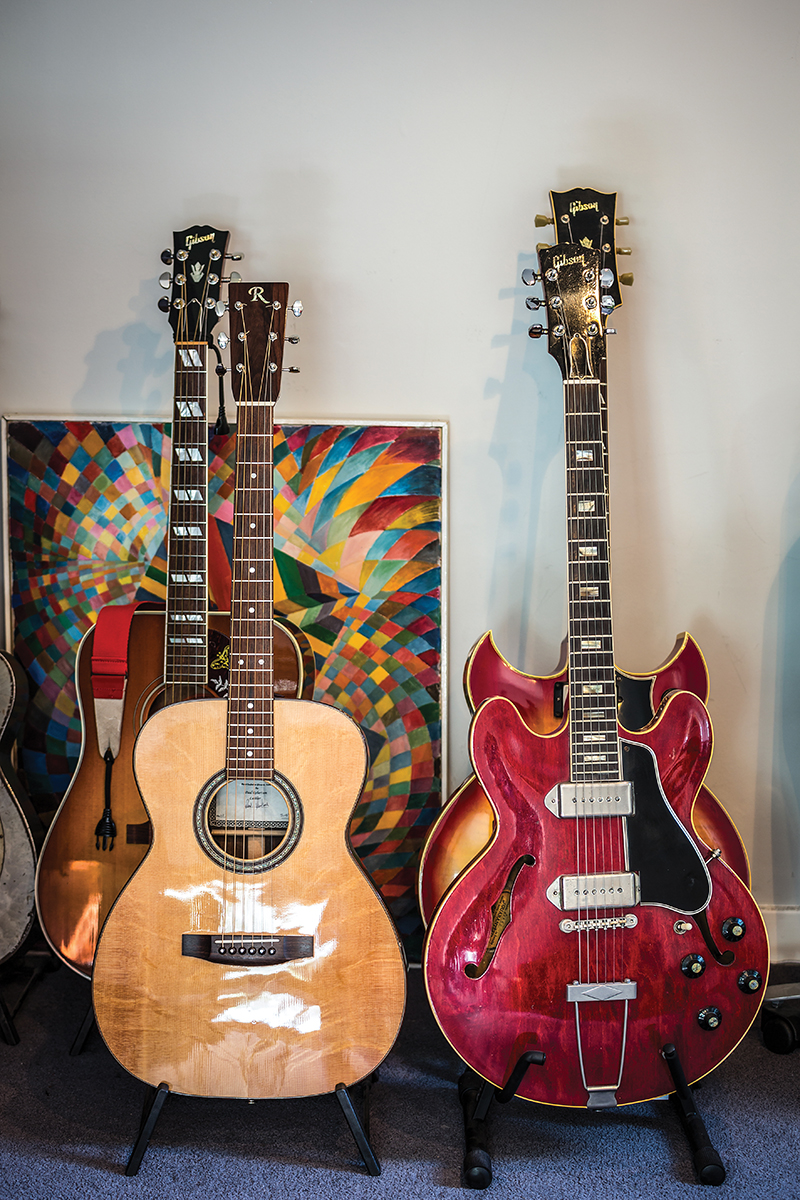 Four years later, Lindsay appeared on the same stage as he had seen his heroes perform, fulfilling perhaps his earliest musical ambition. His first guitar was just as impressive. With an adjustable bridge, his Yamaha FG-330 was a high-spec bargain snapped up for £40, that still holds a place in his collection. “They’re collectable now,” he says. “People go ape, in a small way. The action is so low, it’s stunning.”

While the Yamaha wasn’t a bad starting point, Lindsay always craved the Americana zing of a Gibson Hummingbird, but found to his cost that unearthing one that lived up to his musical aspirations was more difficult than he thought. 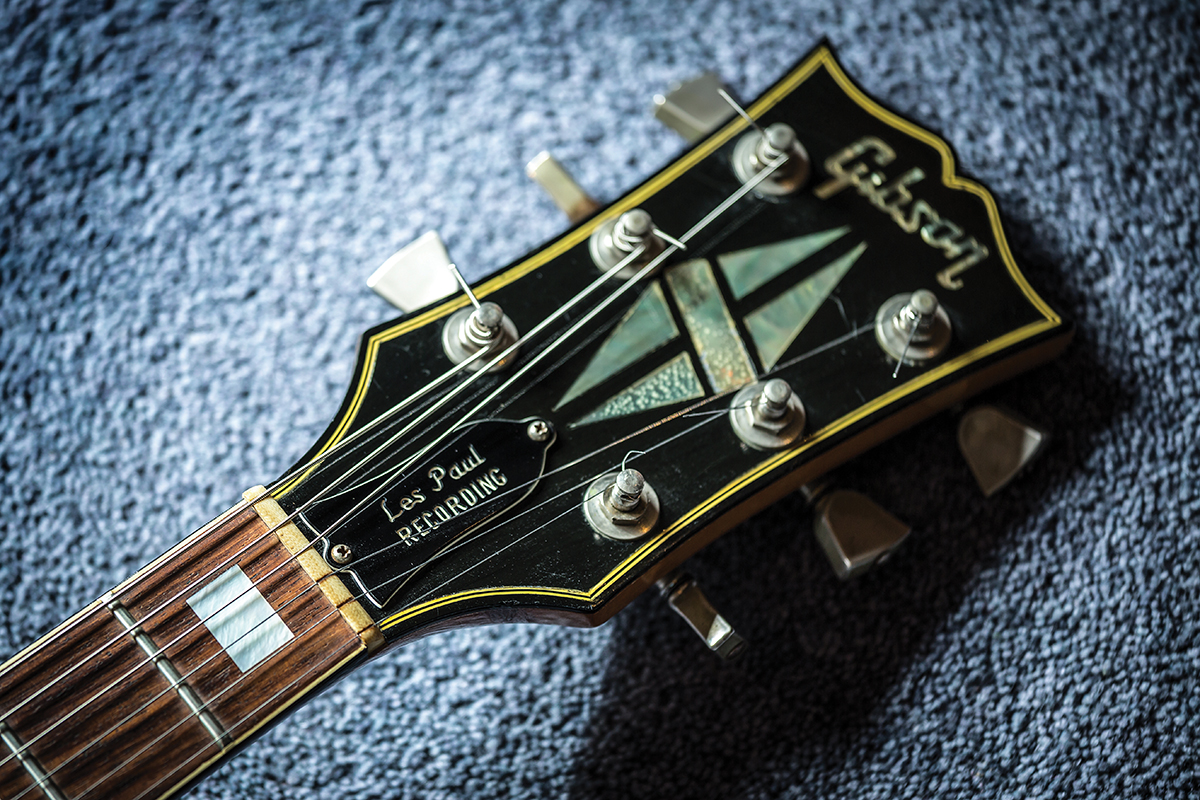 Lindsay’s 2006 Hummingbird is his go-to guitar for film and album work. That is unless he seeks a different tonal palette. “The whole point of having so many guitars is that you can use different sounds for different purposes,” he says.

As if to prove the versatility of his collection, Lindsay starts strumming his 1936 Gibson Recording King M-2 archtop acoustic, with its unmistakable boxy tone that belies the dishevelled guitar that arrived from the US with a broken neck. He explains that a further £40 investment had the £200 guitar up and running: “It has ended up on a couple of albums. It’s great for picking.” 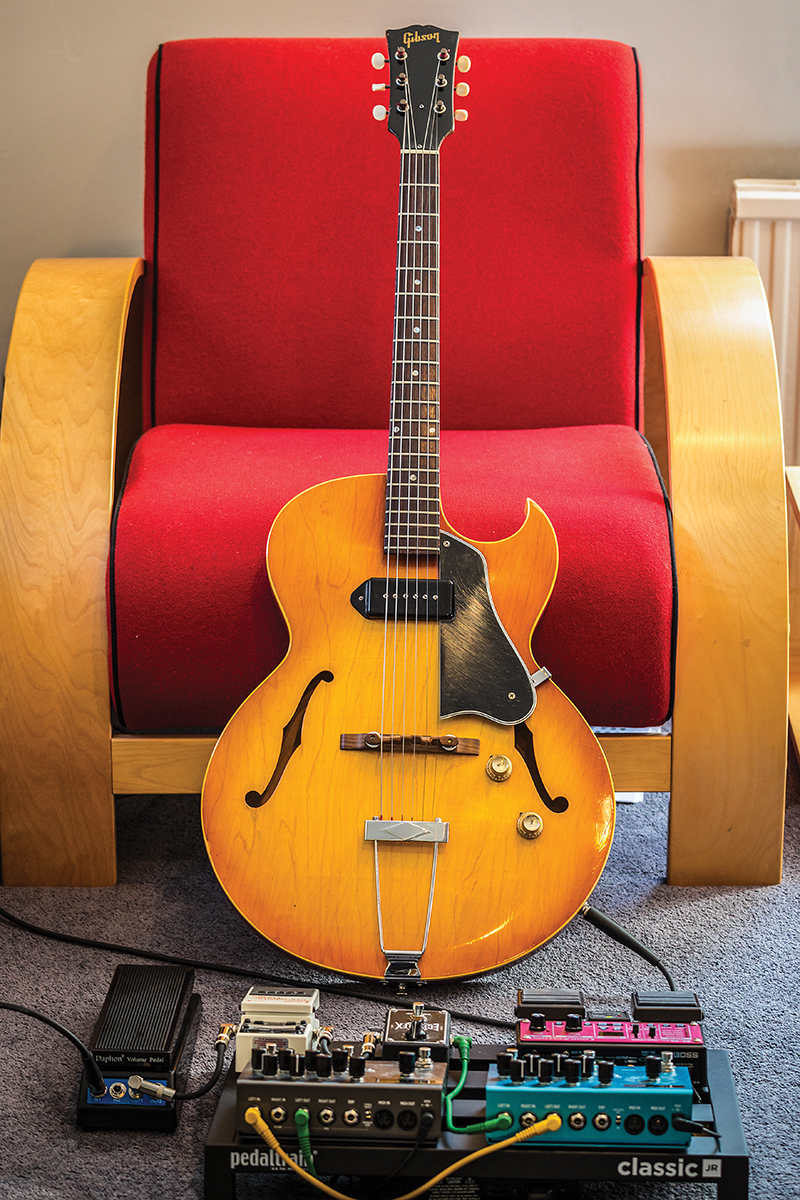 A Gibson ES-125 with Lindsay’s pedalboard

But if age were the only measure, the prize exhibit in Lindsay’s collection would be an innocuous-looking acoustic he acquired from an auction in Glasgow. Incredibly, his own painstaking research traced the patent on the machineheads back to 1889. “It’s hard to verify, but I believe it was built by the guys who were building Martins – or were successfully competing with them at that time,” he says calmly. “I was bidding on two other guitars. I bought a Palermo from 1834 for £500, and bought that one for £80. I sold the Palermo to a craftsman in England.”

So far, Lindsay has been happy to showcase his antiquities, each one offering rich tones to edify a moment of cinematic nostalgia. And while he has a clear affinity to the past, he isn’t afraid to try something new. 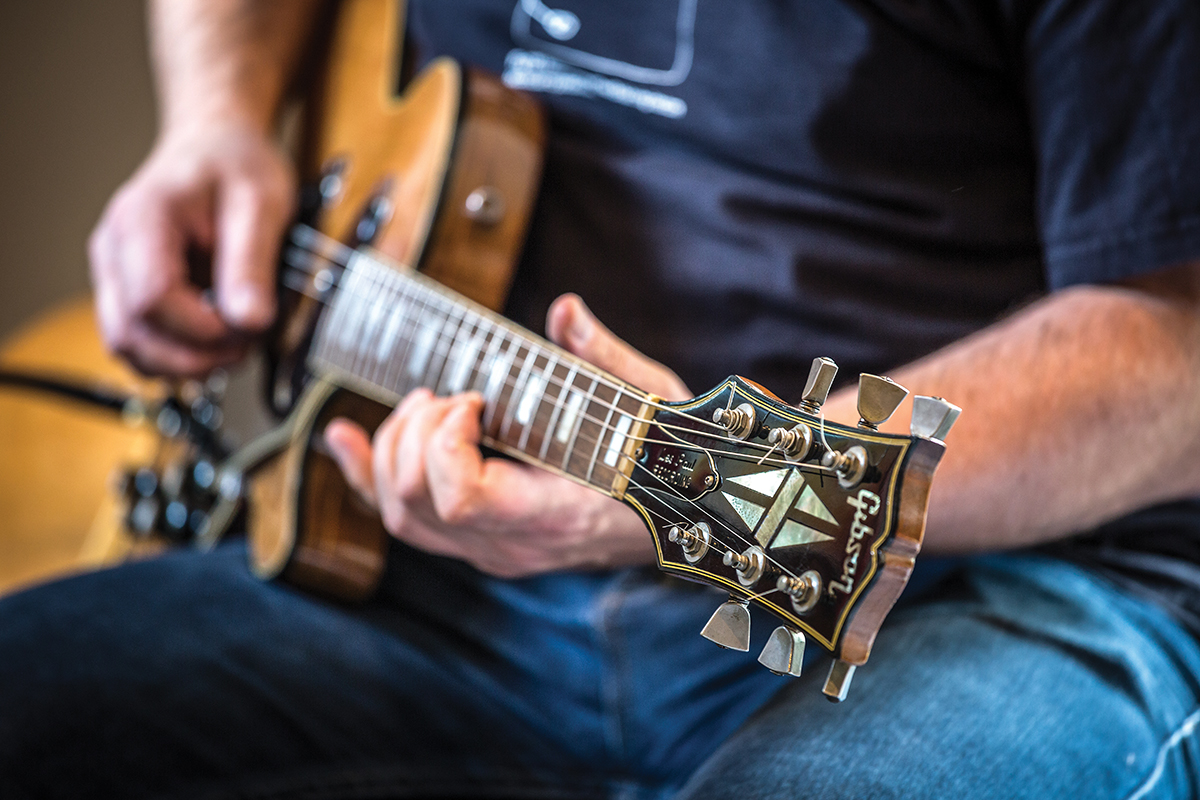 Lindsay playing his Les Paul Recording – his only solid body

“I’ve always wanted a Martin, but they are very expensive. I eventually came across this guitar, which sounds just as good and is made by a Glasgow guitar maker, Paul Robertson,” he explains. “I knew he was Scottish, but that was all. I mistook him for an experienced guitar builder, but he’s just out of college. This is his 10th guitar, and he built his 11th for Graeme Duffin of Wet Wet Wet fame. It’s stunning, I fell in love with it. It has revived my interest in guitar playing.”

Although Lindsay has an impressive range of acoustics, his true passion is jazz. To this end, he has only one solidbody electric – a Gibson Les Paul Recording, of which he is intensely proud. He has added to that a couple of early 1970s Gibson ES-325s and a pair of Gibson ES-125s; one sporting a cutaway, one without. In any other collection, these solid, semi-acoustic and hollowbody masterpieces would sit proudly on top of the pile. In truth, such cherished instruments have merely shaped Lindsay’s journey from guitar collector to creator. 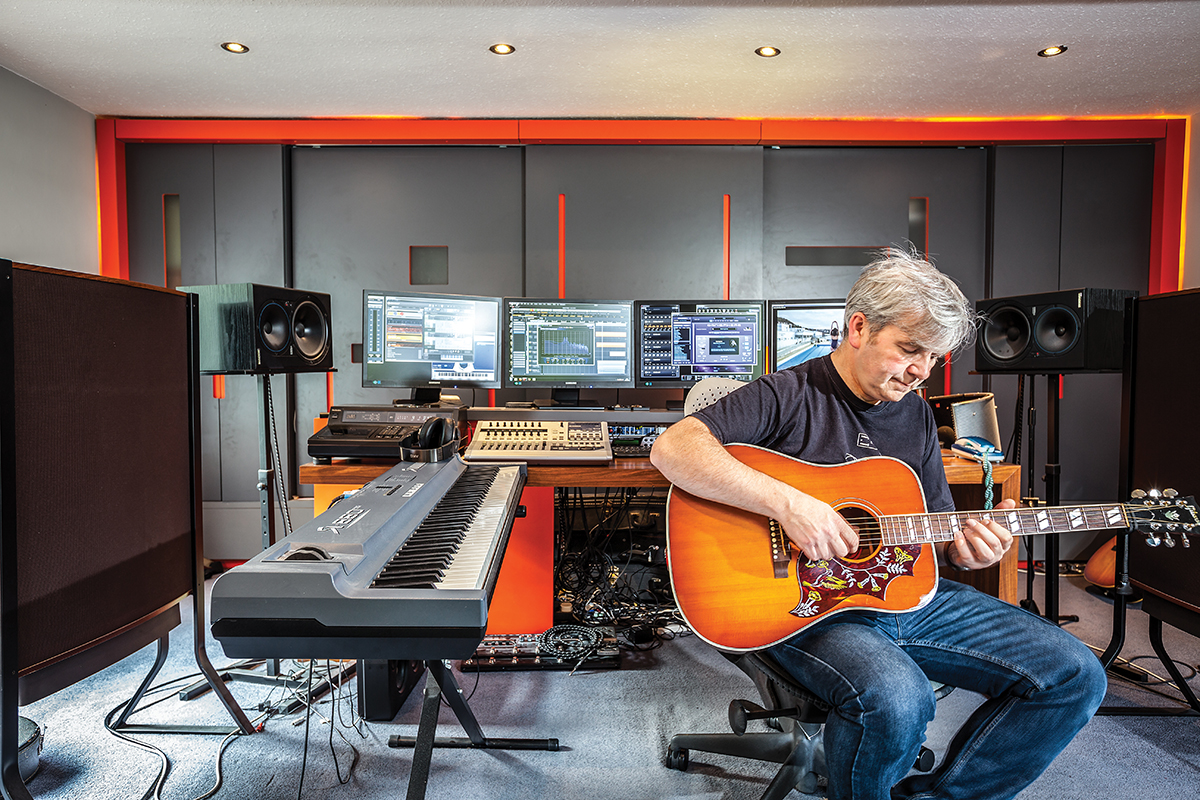 Lindsay with his Gibson Hummingbird

But before he unveils the zenith of his accumulated musical knowledge, Lindsay is keen to dig out two of his most prized guitars. “At the time, this was the second most expensive guitar Gibson made, and I’ll show you the most expensive in a minute,” he says mischievously as he unveils a stunning Gibson Barney Kessel signature model.

Big, bright and distinctive with a deep double cutaway, the Barney Kessel was introduced by Gibson in 1961, and eventually phased out in 1974. This is a special guitar with an earthy tone and bass response that channels the era before the rise of solidbody guitars.

“It has that big jazz sound,” says Lindsay. “It’s a lovely guitar to play. I got it in 2001. In fact, I bought two and sold one. I use it now for jazz chording. I love the colours, and it’s in great condition.” 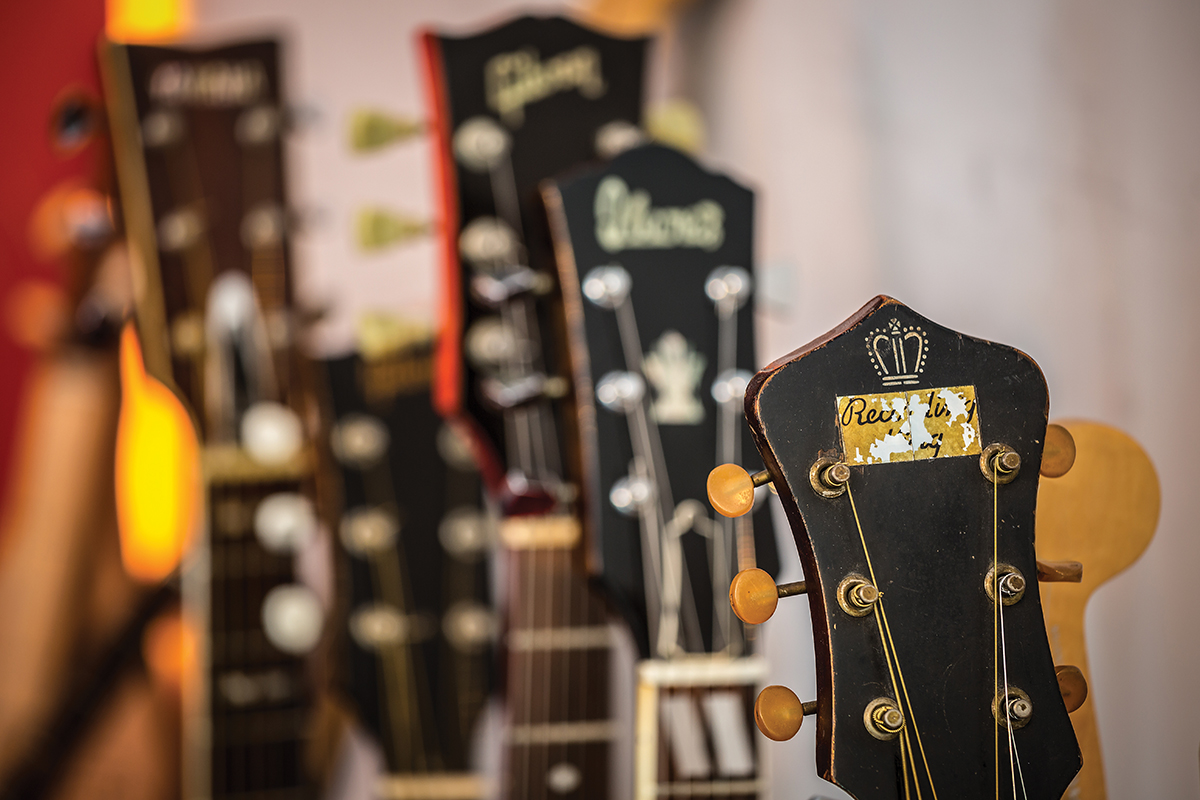 As Lindsay gazes at his Barney Kessel Custom, it’s clear his appreciation of the instrument goes well beyond the joys of ownership. There is recognition in his eyes that what he holds in his hands is a piece of musical history from an era that clearly resonates with him. Yes, it hails from 1966 – as does the pièce de résistance and the veritable cherry on Lindsay’s multi-layered cake of delicious guitar goodness. “This is the posh one – the one that only comes out at Christmas,” he says.

After moving guitars and empty cases around, a squeaky lid is opened and a jaw-dropping 1966 Gibson Johnny Smith Double is revealed. The guitar was modelled on Smith’s D’Angelico New Yorker Special with a DeArmond pickup and reeks of a time when colourful zoot suits and bebop jazz ruled. 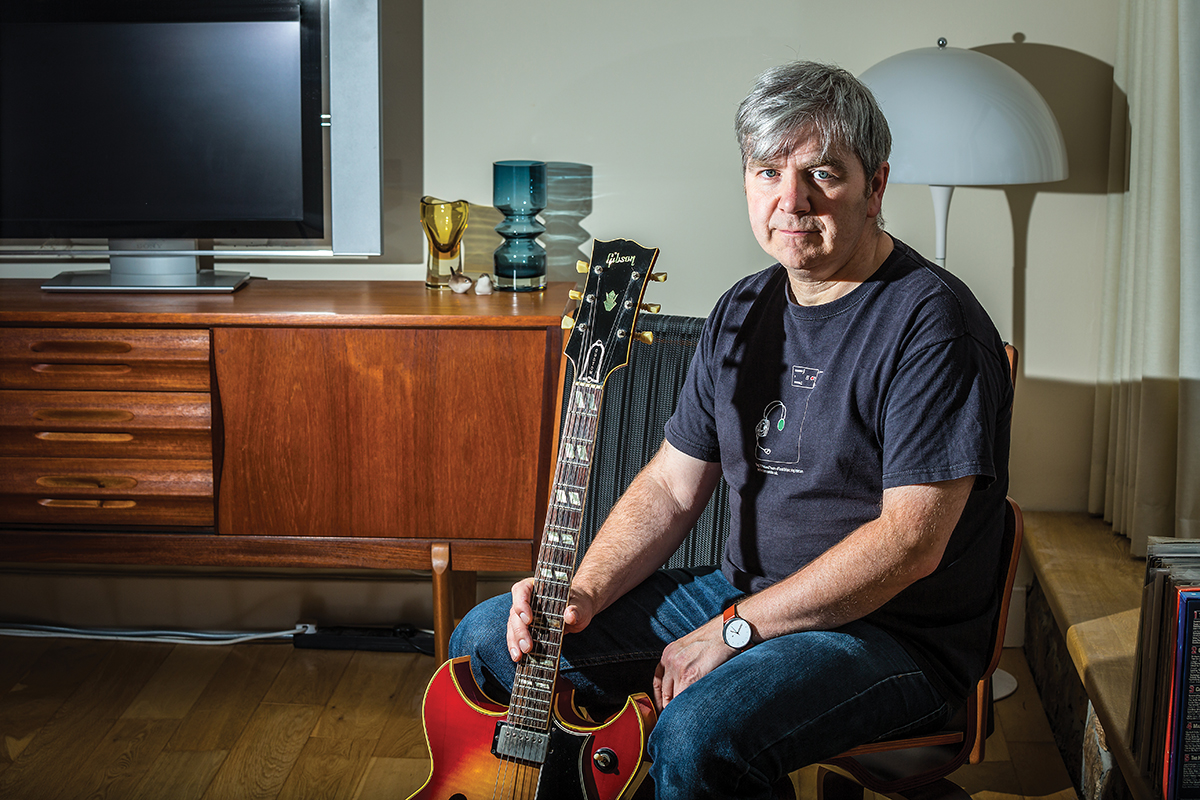 “It has the best neck in the world,” says Lindsay. “When you’re playing guitar, it’s about having confidence in the neck – that it will be in tune all the way up. This one feels fantastic. It’s difficult to put into words. This is the first time I’ve played it for at least a year and the sound is like nothing else.” 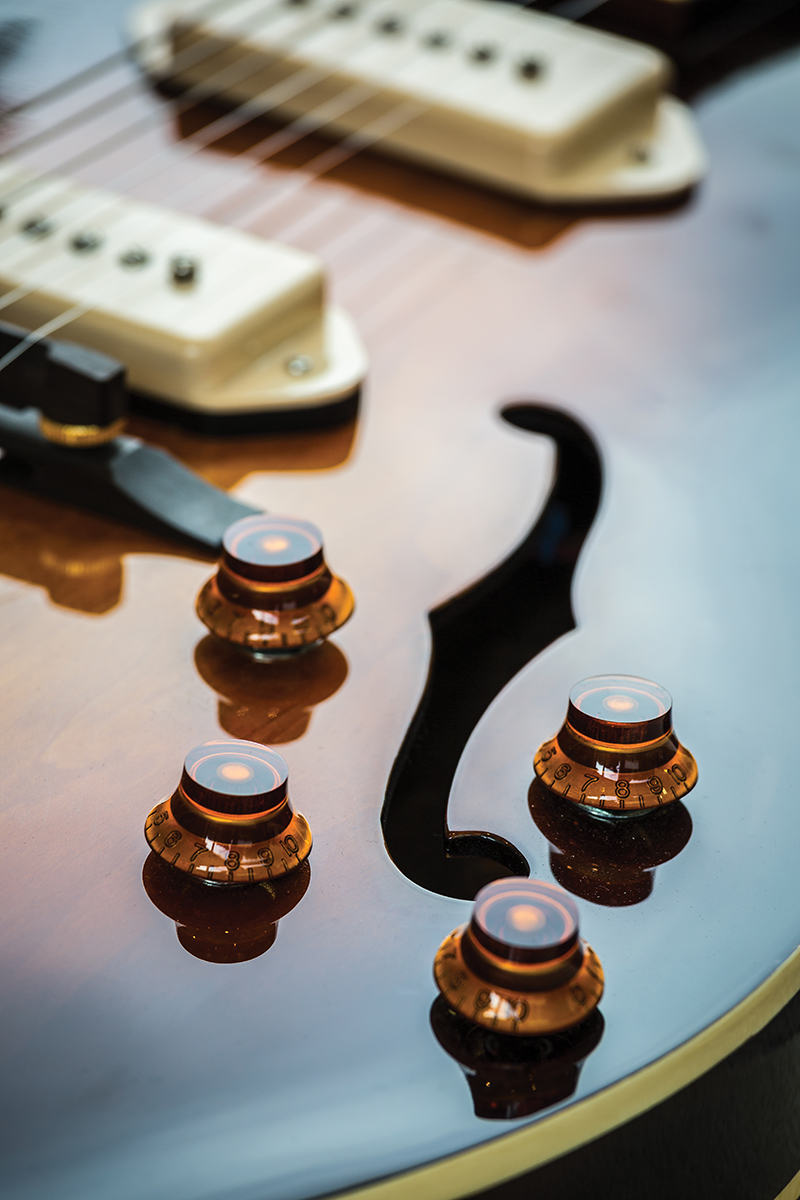 “There is a design flaw that I absolutely hate,” says Lindsay. “All the electronics and pickups are fixed to the scratchplate, and the original scratchplate disintegrated. I got quotes to build a new scratchplate or to buy an original one at a cost of £400. I got round it by getting this Ibanez copy. The whole design is only connected by a tenuous screw here and there. It’s horrible, so I get really frustrated by it.”

As much as he appreciates the tonal possibilities of his stunning collection, Lindsay is also acutely aware of his guitars’ limitations. So, when an opportunity arose to create his own modern-day classic that was as soulful as it was practical, he grabbed it with gusto.

“When I bought it, it was in a terrible state,” he says, recalling buying the 1957 Gibson ES-225 that he has since renovated with the help of Ian Dickinson of The Guitar Workshop in Glasgow. “It had been stripped back and most of the binding had gone. There were no parts on it at all – it was just a piece of wood. It gave me the chance to build the guitar of my dreams.”
Lindsay spec’d the hardware, while Dickinson handled the woodwork and Dave Wilson completed the refinishing. The project lasted about 18 months and cost less than £2,000 to complete. In that time and for that money, a minor miracle was achieved. “It’s not like an original ES-225, because it has a different bridge and essentially a brand new neck. It has a sheen finish, not a high-gloss, so it has a vintage look and it is already in use.”

From the broken shell of a guitar, Lindsay, Dickinson and Wilson created a solid instrument that looks and plays as if it has just left the factory. Of course, the beauty is it’s based on a 59-year-old wood, which provides a rich source of tonal options, and yet plays as if the wrappers have just come off.

It is miraculous, and to prove it wasn’t a fluke, they did it again. “This is the pretty one,” says Lindsay coolly presenting a stunning 1956 ES-225, this time with a radiating sunburst, an adjustable metal bridge and the same mini-bucker that adorns his Johnny Smith signature. His second offering has the same eye-popping looks as the first, but with a glorious finish based around Larry Carlton’s Gibson ES-335. 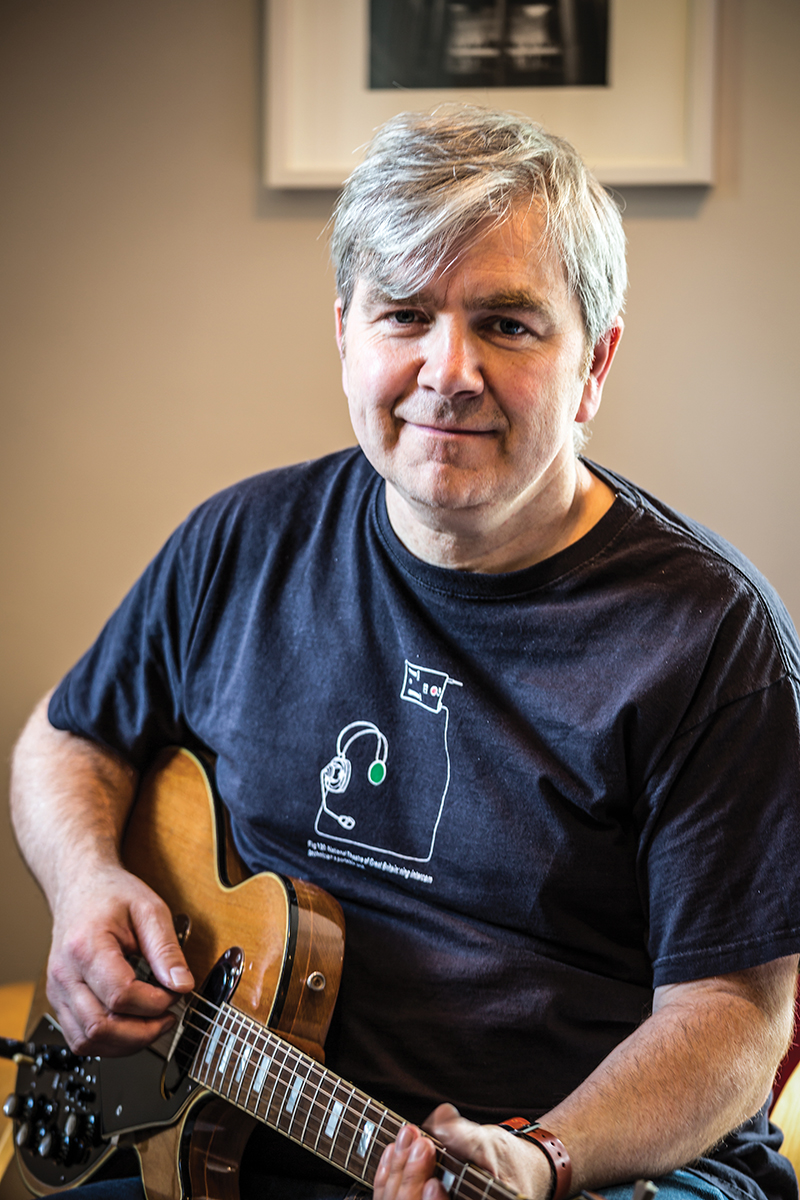 “It is great to be able to choose your own finish,” says Lindsay. “It just looks stunning, and it’s unique. You’ll see on the Johnny Smith, there is a piece of metal that is really unsightly around the neck pickup, so Ian came up with this way of mounting the pickup directly, which I’ve never seen done on a Gibson guitar before. I’ve also never seen this combination of a P-90 and a mini-humbucker. So I’ve built a guitar especially for me and for the sounds I am interested in. It’s a great thing to do.”

The success of Lindsay’s transition from consumer to creator is inspiring. It was also deceptively easy. Lindsay is a skilled musician and composer who, with Dickinson’s assistance, has managed to distil his knowledge and experience into two stunning guitars. Not all of us have the opportunity or aptitude to do that, but Lindsay did with remarkable results.