Mark Neary is an experienced session bassist and engineer, having worked with the likes of Noel Gallagher and Adele. We check out his collection… 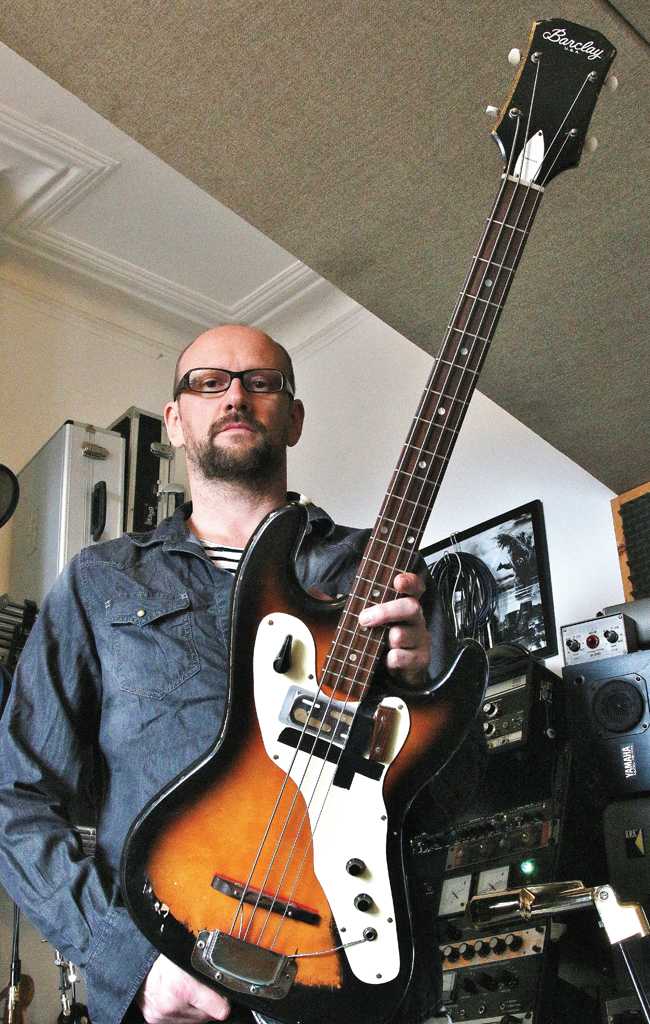 “In an ideal world, if you were thinking about buying a relatively expensive instrument, you’d want to try it before you splashed out hard-earned cash,” says seasoned session player and engineer Mark Neary. “Most of the bass guitars here I’ve bought by chance, as each one was reasonably priced and I thought, ‘if they’re not for me, they have enough kudos to be moved on and get my money back and more’. I’m glad to say, though, that I’ve been lucky every time, especially on some of the older classics.

“I’m not one for buying a bass just because it’s a good price. I’ve seen a couple lately up for a steal, but I wouldn’t have a use for the sound they deliver, so it’s only working basses for me.

“If we go way back to the beginning, I just had my Fender Jazz Bass from ’96, which played and sounded as it should. Then I bought a Burns Bison from 2005 and I was thinking to myself, ‘OK, you play bass and you have two basses, but why am I leaning heavily toward the more mature sound of the ’96 Jazz Bass?’ 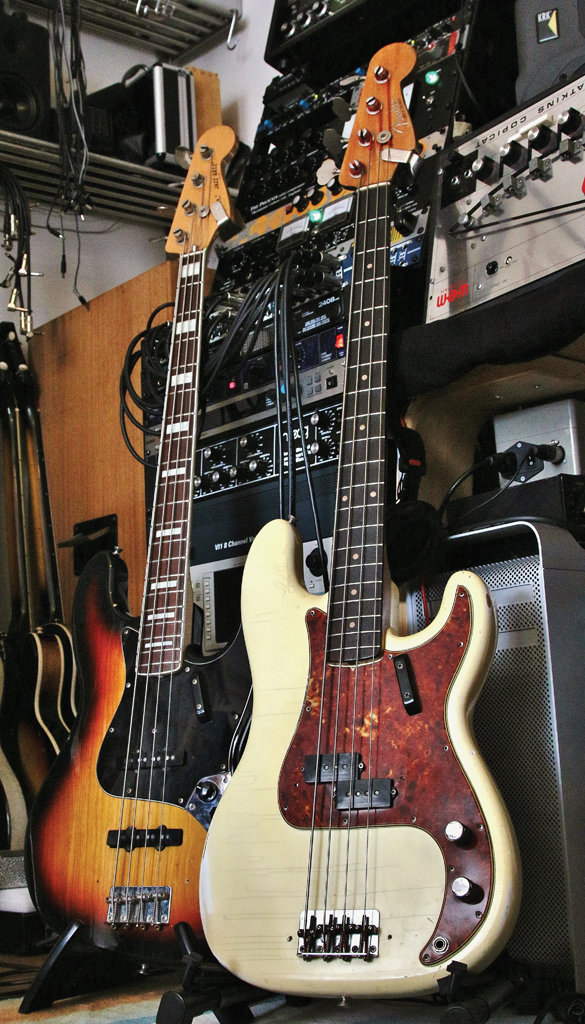 “I really didn’t realise how diverse different bass guitars could sound until I tried out a ’78 Precision in a shop and my inner beast was unleashed. I bought that bass straightaway. To date, I find modern basses just sound, well, too modern. I personally feel that age contributes enormously to the sound.

“It’s the older the better for me, I guess it has to be how the wood has dried out over the decades, and maybe when the nitrocellulose finish wears off it lets even more moisture out. When I bought my white 60s Precision it sounded even better than the 70s model.

This bass actually was one of those ‘chance’ buys. Even though it was more expensive than a crack habit…” he laughs. “It dates from February ’60, so it’s probably the closest I’m gonna get to a 50s model, which I’d love. It’s the ideal bass for session work and if I get the call to dep for a bassist.

I used it when I stood in for Adele’s bass player, who uses a ’61 in the studio and live, as I had a very similar model, her songs maintain the same bass vibe and it wasn’t alien to the rest of the band. 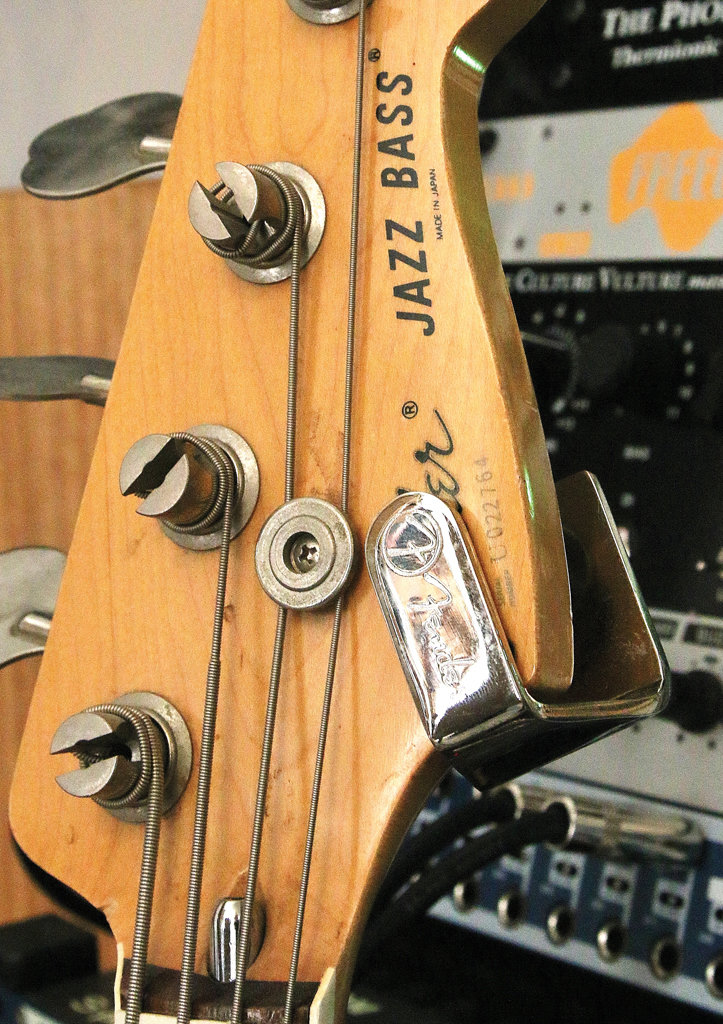 “You’ll notice that my basses have Fender Fatfinger sustainers on the headstocks to iron out a few flat spots on the necks, and they work a treat. I noticed a difference straightaway, they’re great for studio work instead of having to massively compress everything.”

Neary’s main basses are, indeed, from the 60s and a little unusual as modern-day workhorse instruments. “My most versatile bass is the single-cutaway Harmony H22 dating from ’63. That bass has a lot going for it – apart from being lightweight with an ultra-thin tone, chambered body and looking cool, producers love the balanced tone, as it just sits in the mix. Played with a pick, it can be bright and twangy, but if I use my thumb it’s really subby with Thomastik-Infeld flatwound strings. 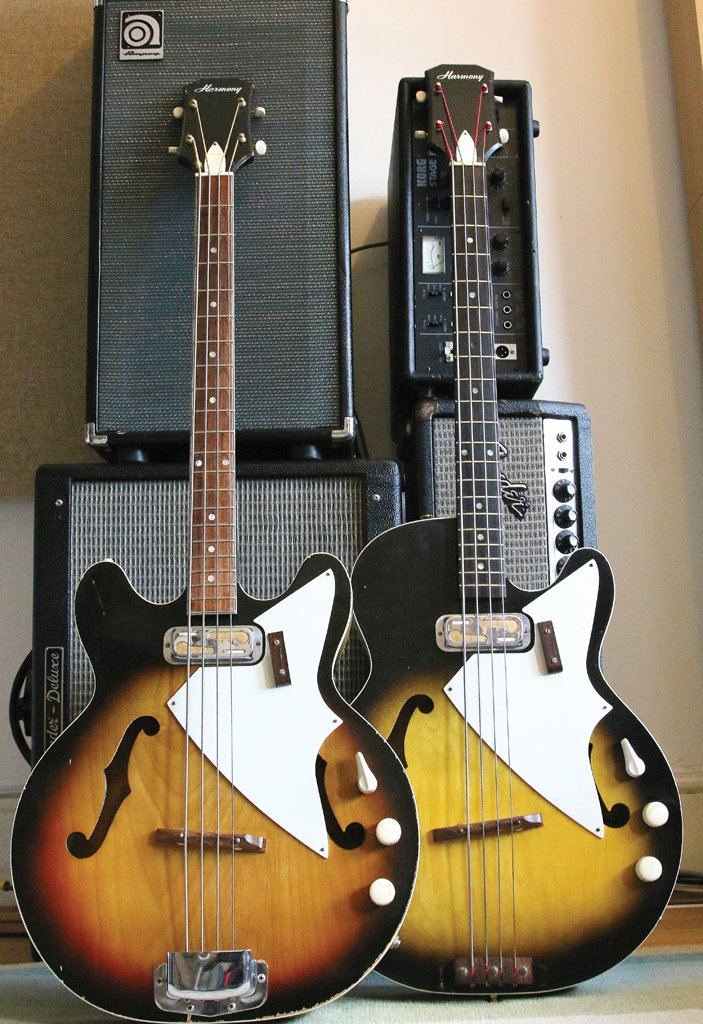 “I also have a ’69 double-cut Harmony H22/1, again with a DeArmond Golden Tone gold foil pickup. This one is fitted with roundwound strings, has more of an edge to it and can lend itself to pushing an amp’s front end a little more. I’m tempted to fit roundwounds to the singlecut, but it just sounds too good as it is. Both have the ‘toilet-flusher’ switch, which reduces the low end for more of a baritone register.

“I’ve got another twin-cutaway Harmony, a H27 also from the 60s, which at the time was the company’s flagship model with upgraded appointments like intricate bindings, shell patterned celluloid headstock, a pair of upgraded DeArmond pickups and a six-way adjustable metal bridge. While it’s also lightweight, it’s physically big. Ronnie Lane, of The Faces, wasn’t a big guy, but he looked blisteringly cool playing his. 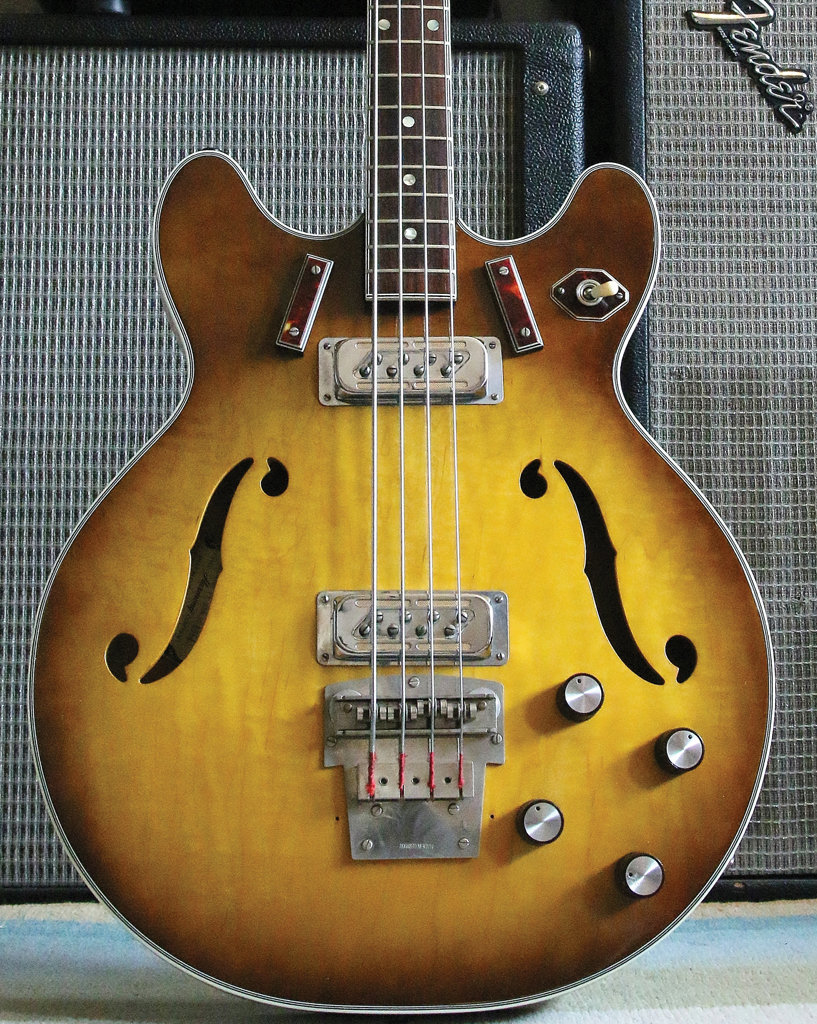 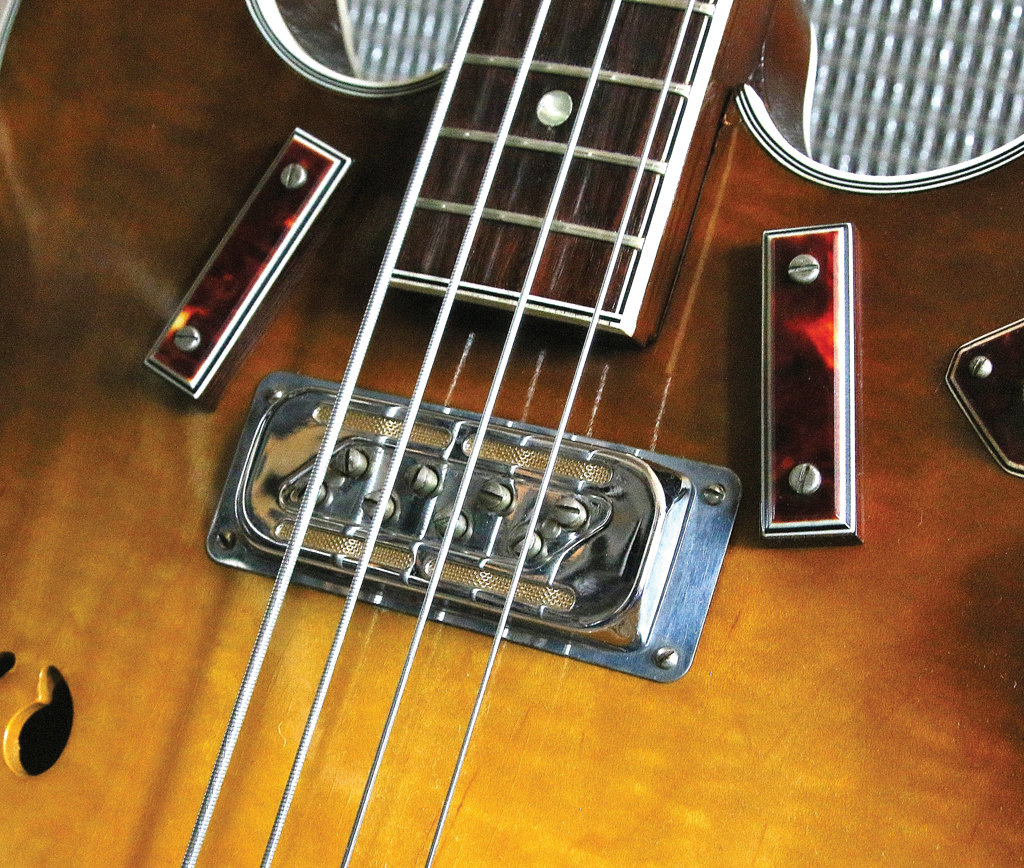 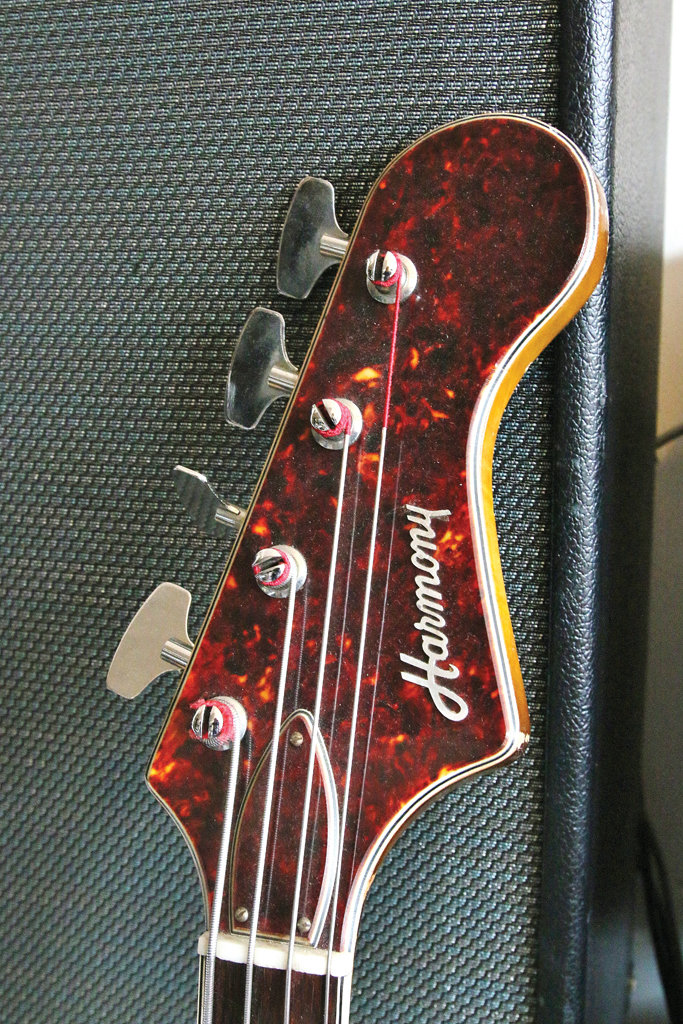 “I love that ‘being smothered by bass’ look. Luckily, I’m over six foot, so I’d like to think the Harmony basses look balanced when I wear them, unlike my ’66 Fender Mustang, which does look a bit weird on me. It’s a cool bass – it just sounds like, well, wood, with a really punchy midrange. Looking at the body scars, I would say maybe a punk bassist once owned this one. I love all that natural wear and tear. I used this on Baxter Dury’s [son of Ian Dury] album, it just fitted so well. 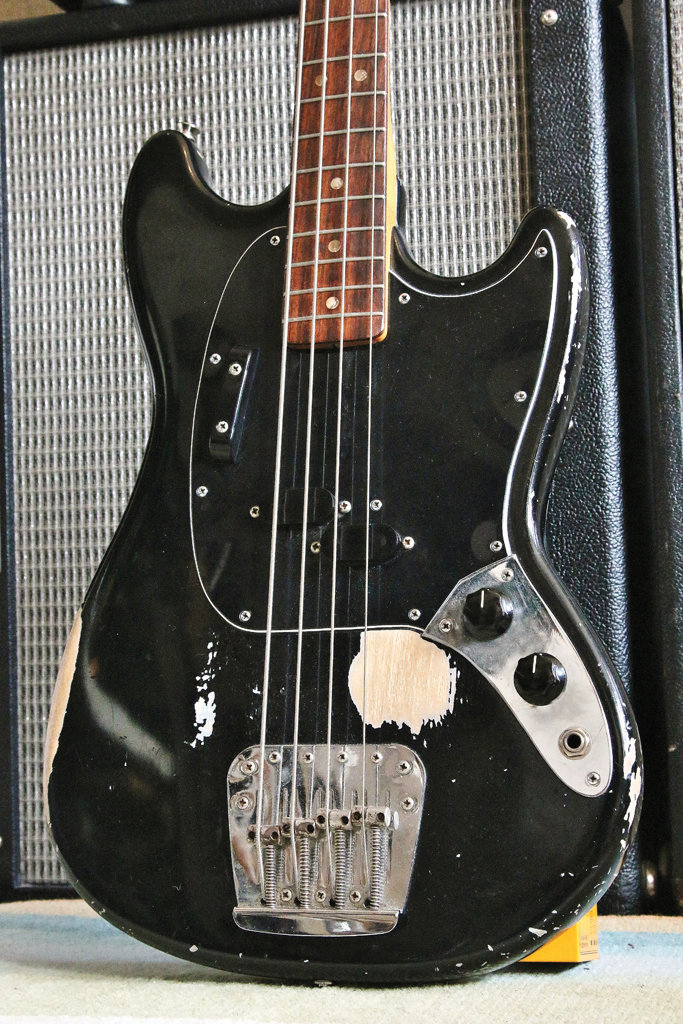 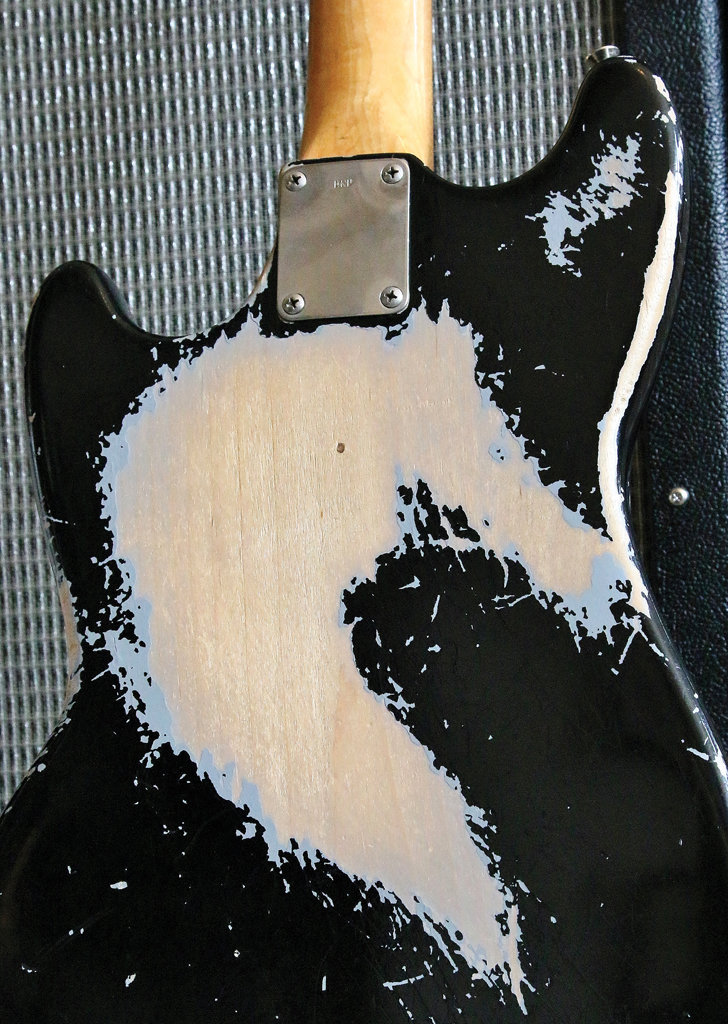 “The Silvertone I have is a Danelectro-built 1444 bass and is from the early 60s. As we know, it’s built from Masonite. It has a usable and distinct sound, but I need to find a gig for it. 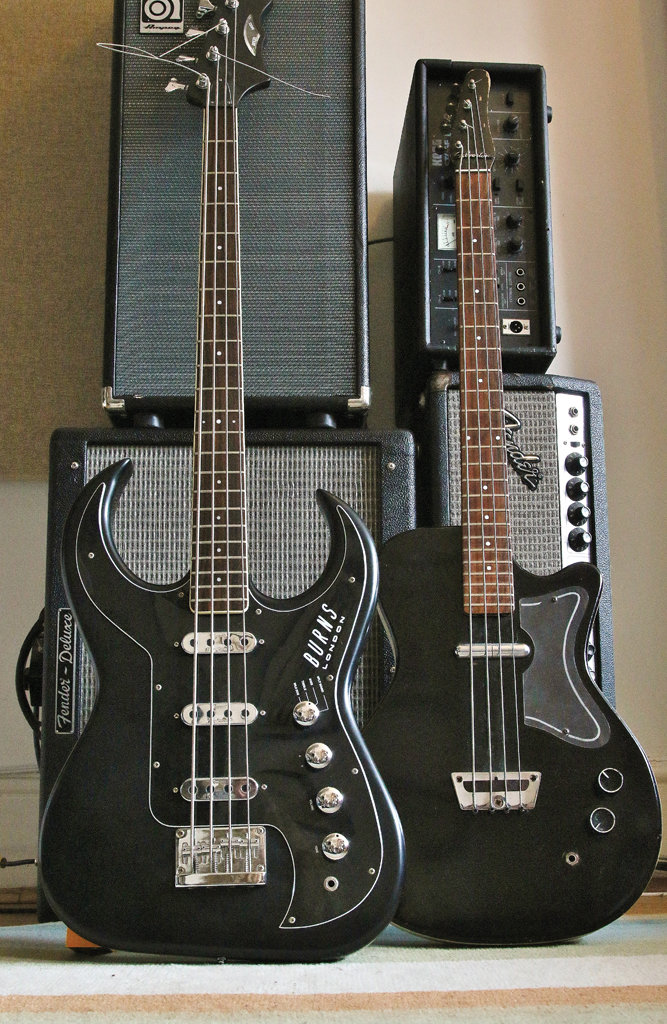 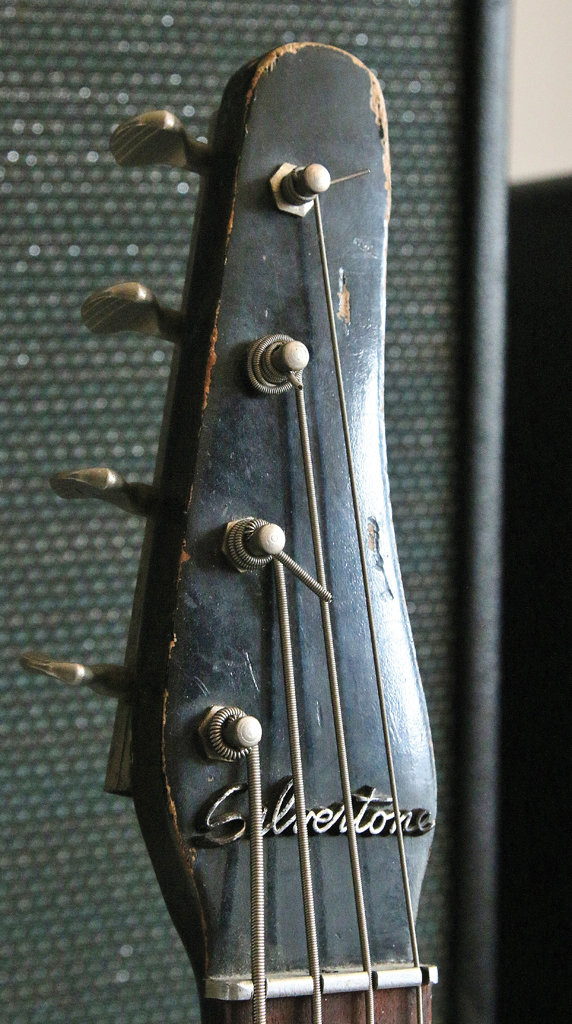 “You’ll also notice that I’ve taken a lot of the hardwear off these basses, especially bridge covers, and the pickup cover on my Rickenbacker 4003, dating back to ’77. I just find it all gets in the way when I want to mute or dampen strings. The Ricky is a great bass, what can you say about the performance of a Ricky that we don’t already know? I used it on a session with producer Dan Carey; he said it sounded so good that after I left he went out and bought one.” 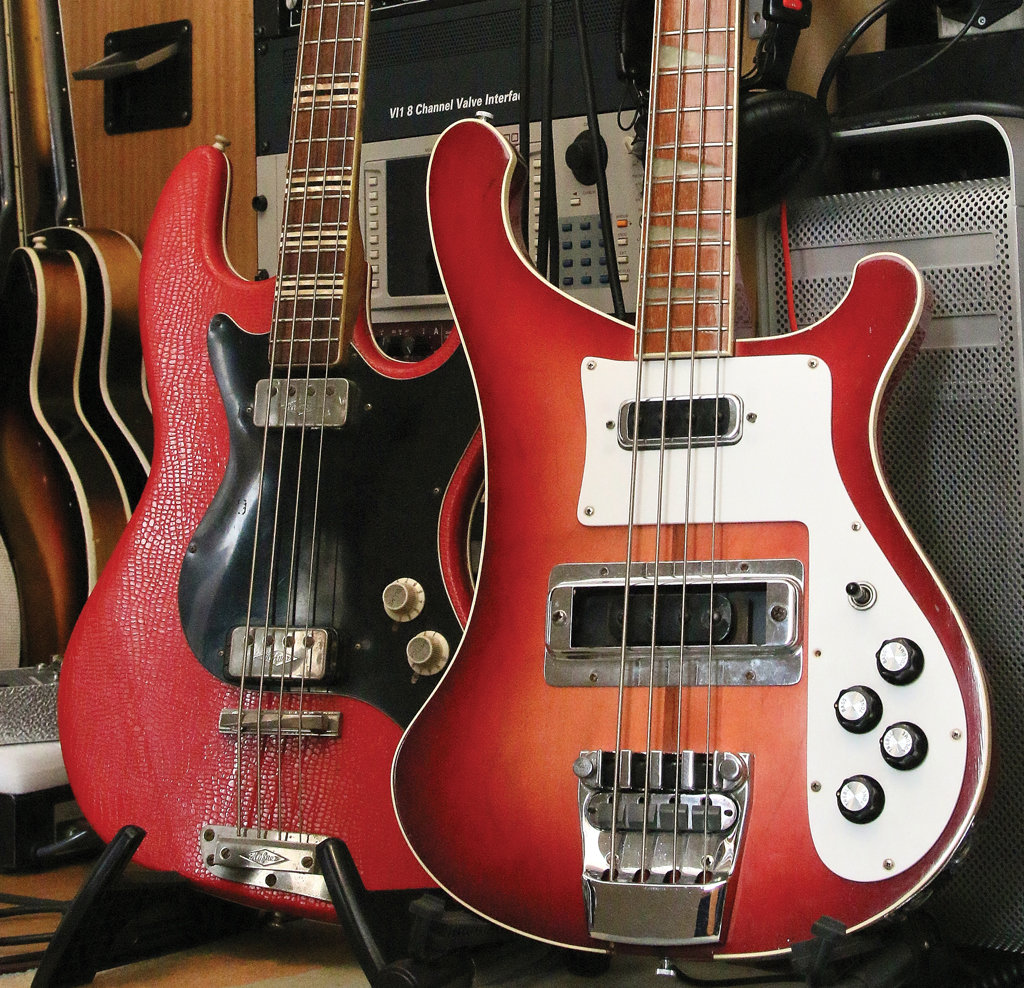 Whilst he is a popular bassist and respected session player, Mark has added another set of strings to his bow.

“We are in an age where musicians need to be as diverse as possible to survive,” he says. “A while ago, I was thinking what else I could offer, apart from being a session player, a programmer and an engineer. So I bought a 10-string Zane Beck Custom pedal steel guitar dating from ’69, which has proved invaluable. It’s not for the faint-hearted, and certainly a lesson in dexterity, which includes operating the levers with your knees. I sometimes have a problem with my right knee, it’s inclined to rush ahead of the beat. There are so many cool pedal steel players out there for inspiration. 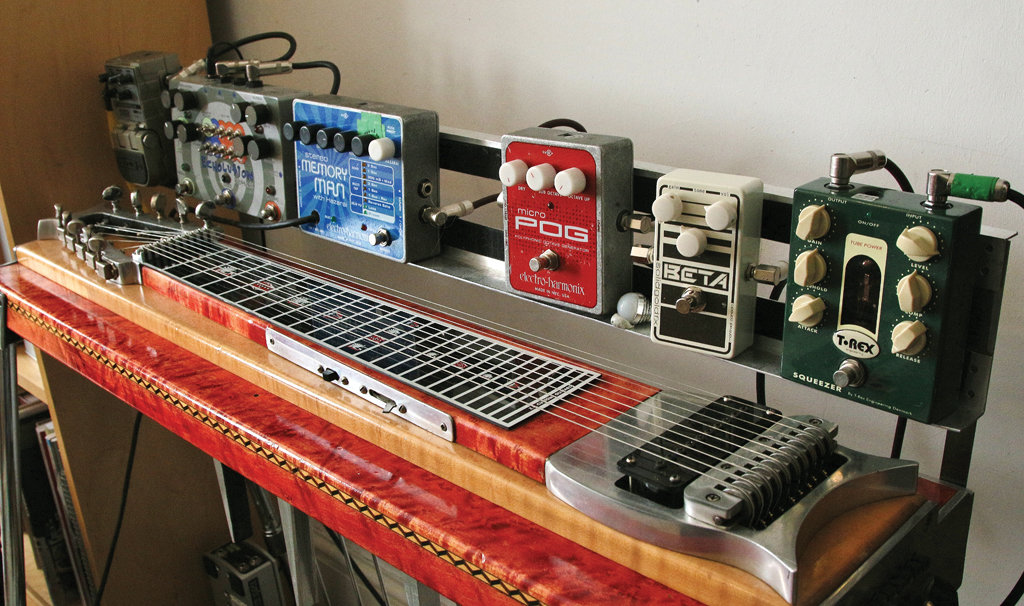 “I don’t really listen to many bass players, although I adore the tone that Carol Kaye has, the amount of records she has been on is quite incredible. I also like the outrageous playing of Dave Richmond on Serge Gainsbourg’s Histoire de Melody Nelson album, and I love the deep basslines of Kraftwerk from the 70s onwards. Their album The Man-Machine has a real funk to it, even though it’s all synth basses.

“I’ve got a German-built Hoya 5044, weighing and sounding the same as a pregnant Rottweiler! It’s an odd bass, but it’s full of tricks with three pickups, a five-way selector and a couple of balance controls. I’m using this bass at a show I’m doing with Jane Horrocks that’s running at the Young Vic in London. The story theme is based on the Northern post-punk era in the 80s, at a time when music in this country was brilliant. It covers a lot of songs from that period, so the versatility of this bass makes it ideal for the job. We also have Rat Scabies on drums, who is amazing, rather like a train out of control. 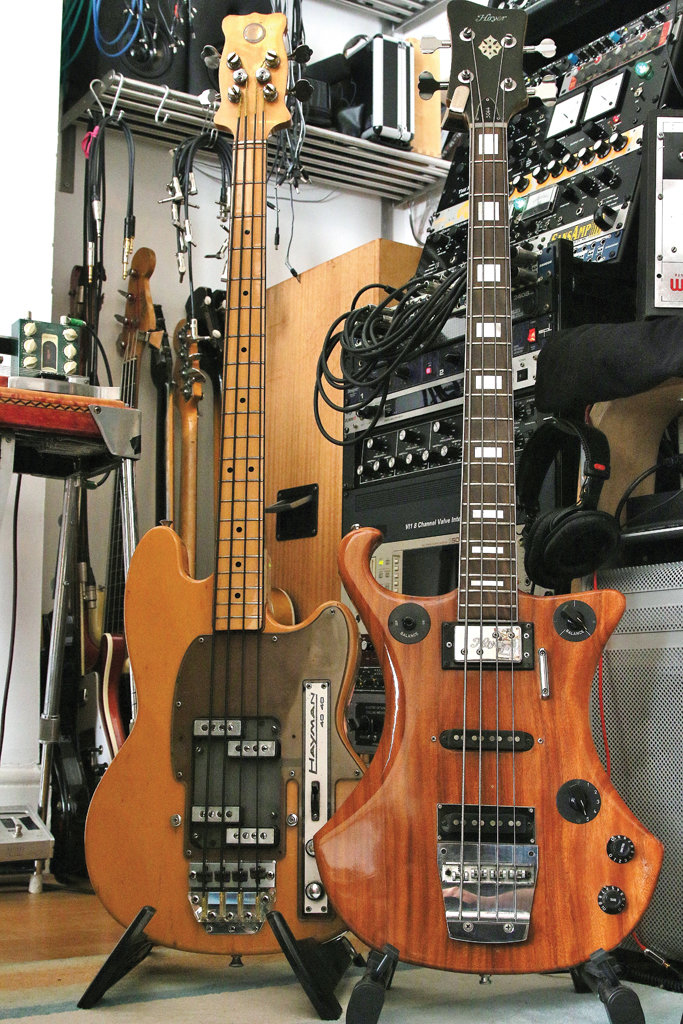 “Every time I look at my 70s Hayman 4040, Buck Rogers comes to mind. It’s another British classic of course, built by the guys who eventually launched Wal basses. I think the bassist from Mud used to play this model. Fitted with 65-gauge black nylon strings, it’s ideal for just stepping back and taking it easy, great for slow reggae basslines with a wildebeest of a bottom end.”

From large to small, Mark then produces a mini bass with a giant sound. He explains: “The Kala U-Bass has an even bigger sound than the Hayman. It’s basically a high-quality ukulele bass with a mahogany body, a solid spruce top and loaded with Road Toad Pahoehoe strings, which are really loose and made from a kind of rubber. It looks more than a little weird on a tall guy like me, so I played it sitting down when I used it at the Lead Belly Fest in 2015 at The Albert Hall. 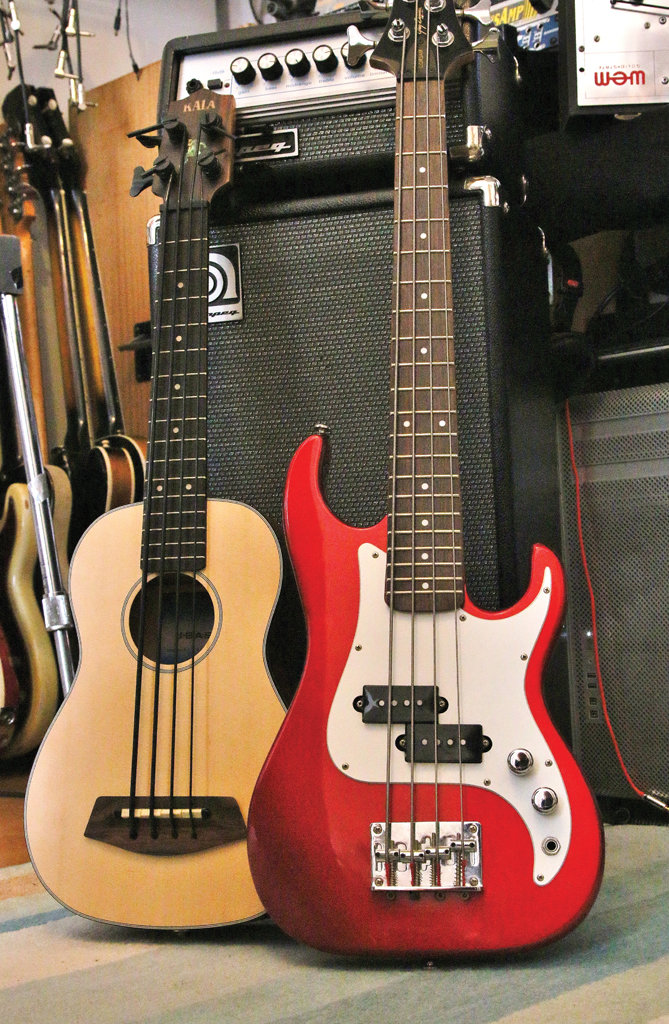 “That was a cool gig, with the likes of Van Morrison, Billy Bragg, Eric Burdon, Walter Trout, Gwen Dickey and Josh White Jr. I used it on a duet with Gwen and Josh. There’s no room for mistakes with this one, with big strings and narrow frets. Through an amp or PA, this U-Bass sounds bigger than my double bass – which is a non-specific East German model from the 70s.

“I took it on the tube to get to Terry Britten’s State Of The Ark studios in London. Not only is it a nightmare to transport, but for whatever reason it has the ability to attract crazy people who ask if it’s a big violin. So I avoid going underground with it.

“I played it on Noel Gallagher’s first High Flying Birds album at Terry’s studio. They wanted a roomy sound, so they recorded me in the toilet. It was cramped to say the least but it worked, it sounds cool on the album. We had a strict no-flush rule, or else we’d have to wait 10 minutes between takes. 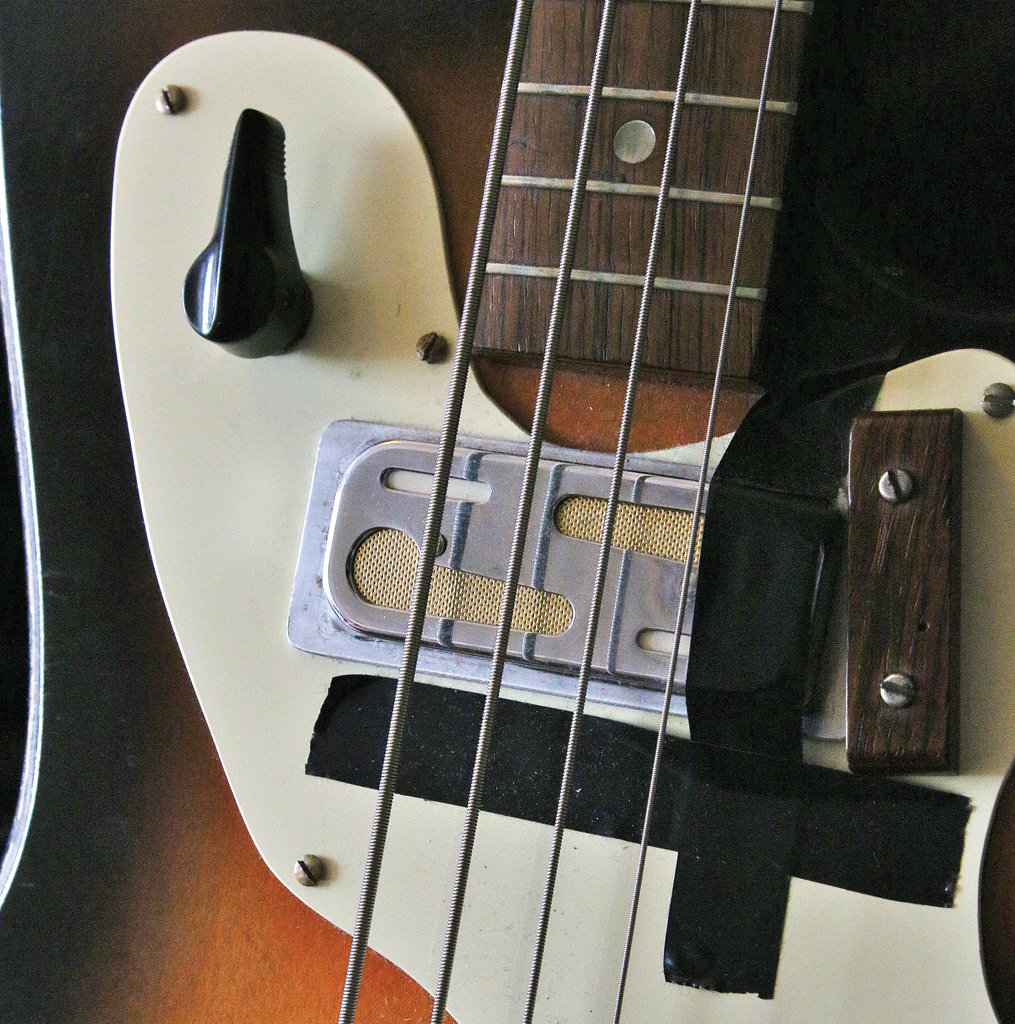 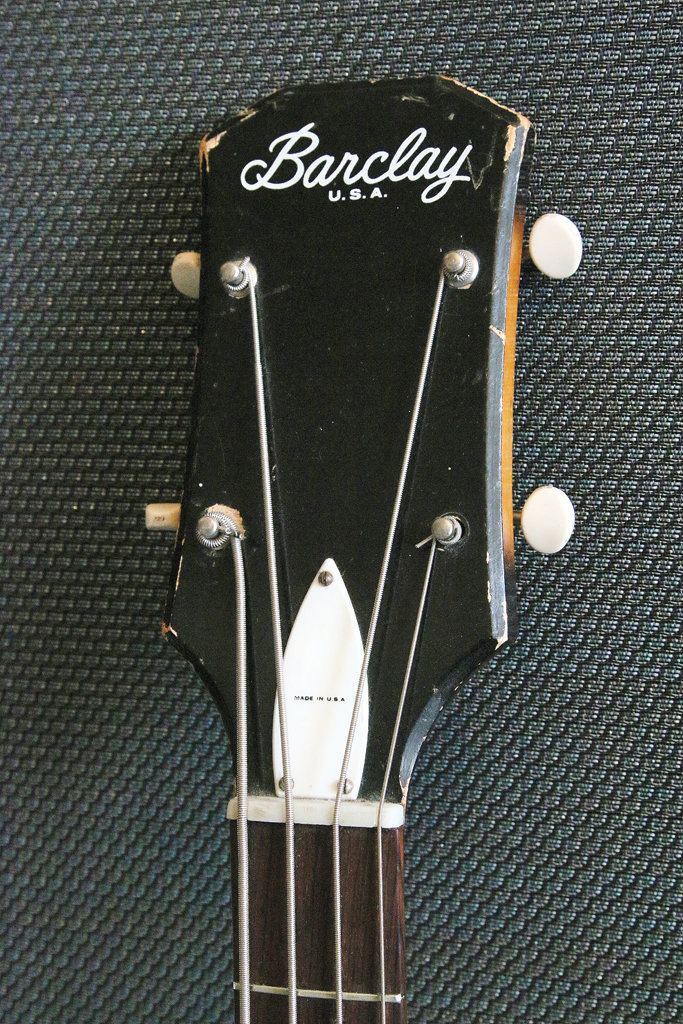 “My USA-made Barclay is my number one guitar for live and studio work, and it kind of fits in where we started talking about old mature basses. It probably came out of the Harmony factory like the H22 models, as it has the same hardware, including the toilet flush lever and gold foil pickup. This is a devastatingly good-sounding bass, a cross between a Ricky and a Precision, a massive sound played with fingers or edgy with a pick. There’s a little damage near the end pin – I’m not sure if it’s been under water or set on fire, but I’m cool with that.” 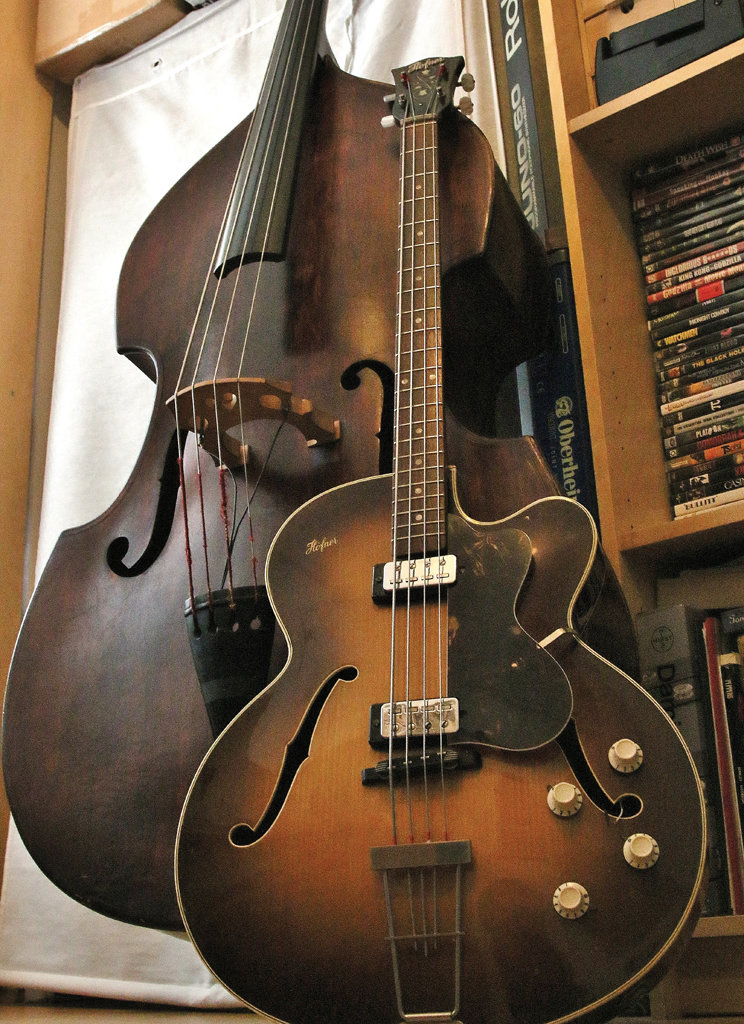