Alphabetic guitarist Walter Heale is a big fan of Jazzmasters and Gretsches, often modded. He takes us on a tour of his enviable collection. 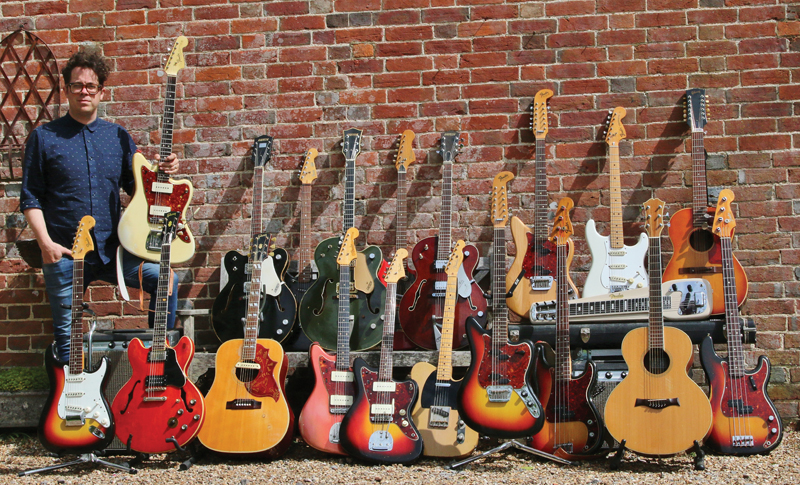 “I’m happy to say that I am a Jazzmaster guy,” confirms Walter Heale, the guitarist in London indie-dance quartet Alphabetic. “It’s a pure analogue guitar sound all the way for me, rather like Robert Smith did in the early days of The Cure with his Fender Jazzmasters, and Tom Verlaine in Television during the second half of the 1970s. I loved that period and some of the bands that came out of New York with a sort of stripped-back punk-pop vibe.”

“Alphabetic includes electric piano and synths in the mix, which blend well with the Jazzmaster.” 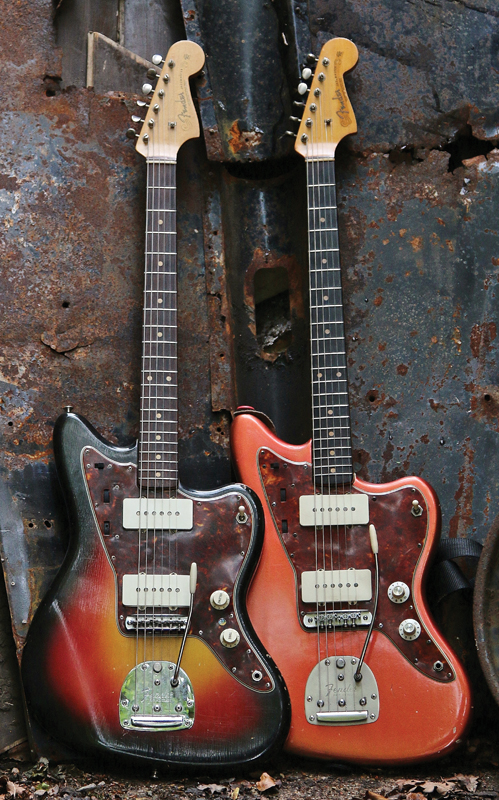 “I play this refinished Jazzmaster a lot, even though it’s actually the sum of many parts, with a ’63 body and a neck from ’62, on which sits a tightly grained rosewood fingerboard that looks like ebony. This sunburst model, which is fitted with a Strat vibrato arm, is in exceptional condition for a ‘61 example. It’s a fantastic all-rounder and I particularly like the slab fingerboard.”

Like so many vintage Fender guitars finished in Olympic White, over the decades Walter’s favourite Jazzmaster has taken on the classic ‘mellow yellow’ hue. 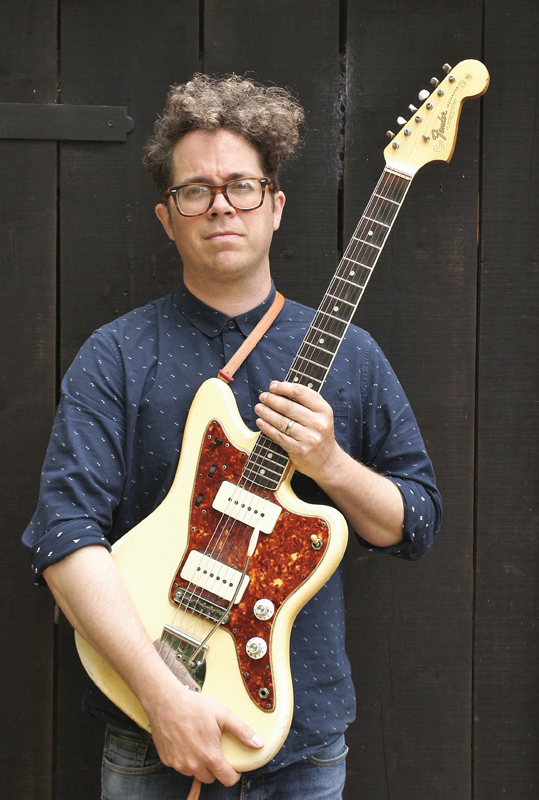 “This one is from ’65 and quite rare, as it was the only model that year with the fingerboard binding, pearl dot inlays and the matching headstock, which has also faded. This is the one I use all the time now in the studio and playing live. It just works for me – it’s a very versatile guitar and I think the sound is unique. I love the combination of the rosewood fingerboard and the fat sound of the neck pickup, especially through a Fender amp – my old Fender Musicmaster Bass amp works a treat.”

“I use a lot of pedals, which work so well with Fender amps. I’m a fan of old analogue pedals, I love playing with compression and wet effects which fill out the sound, but I pull all that back a little if I’m using either of these two Fender electric XIIs, as they have such a big sound from the start and are still, arguably, the best electric 12-string ever built.” 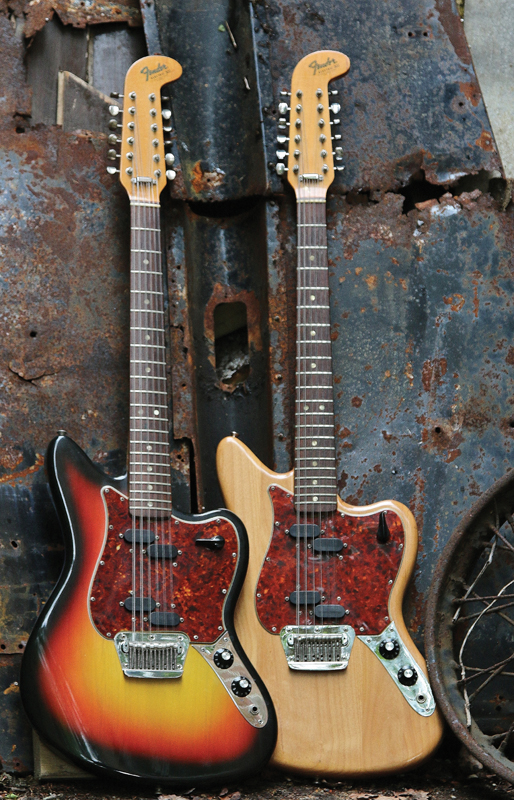 “I first saw Edwyn Collins play one, then Johnny Marr in The Smiths. This one dating from ’67 has been stripped back to the wood at some time. I thought about refinishing it in sunburst, but I may just keep it as it is. The other one is a sunburst ’66 and the one that I keep at home, as it’s almost mint. I used this one on several tracks on Alphabetic’s new album, which is set for release early next year.” 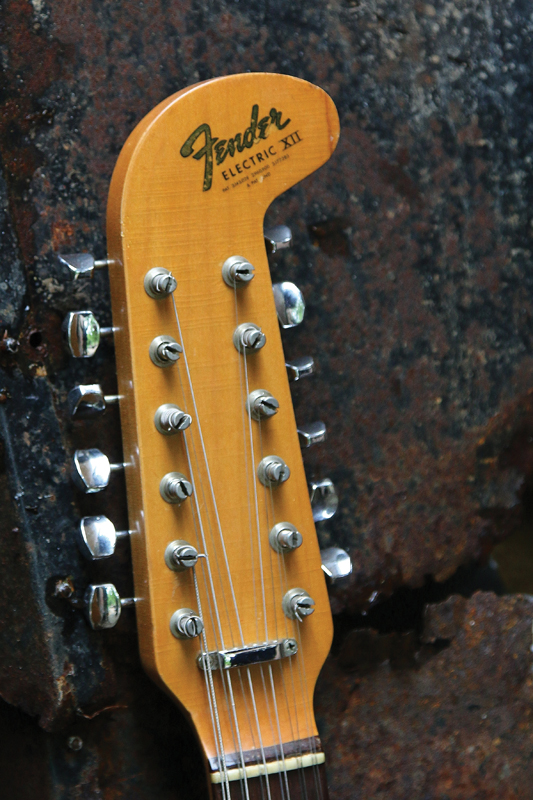 Walter also has a couple of cool Strats – one for the road and the other for home use. 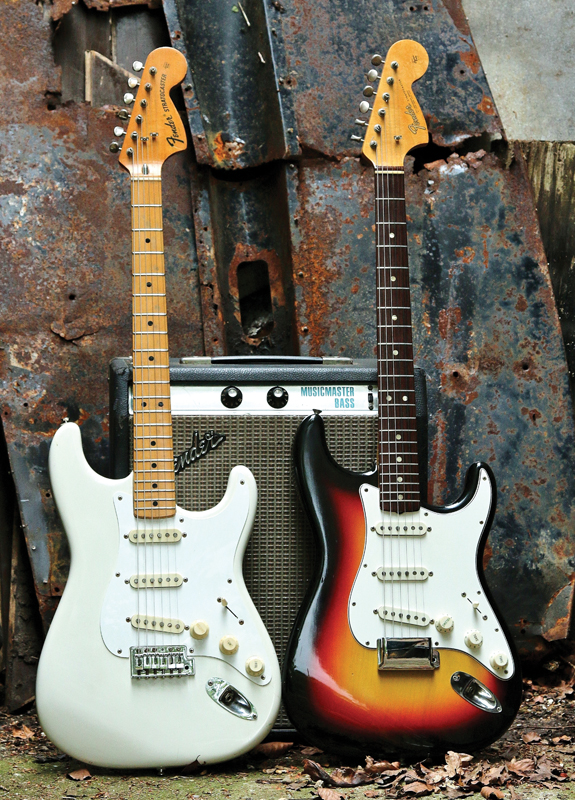 “I have a very clean ’65, which just comes out to say hello now and again – it’s just too clean to take out gigging,” he says. “I try to look after my guitars, but they live a proper life on the road, and this one is a bit too perfect for that. This ’72 model is the one for gigs – I bought it off one of the roadies from Manfred Mann’s Earth Band. He bought it from one of the guys in the band. It was originally sunburst, but as he was a big Hendrix fan he refinished it in white.”

“It has all the classic tones and a bit more spank from the maple fingerboard. I saw it on eBay while I was ill in bed after a hernia operation. he only thing I could think of to cheer me up was to buy a guitar, and I certainly felt better after that. I couldn’t drive to pick it up, so I had to get my wife to do the honours.” 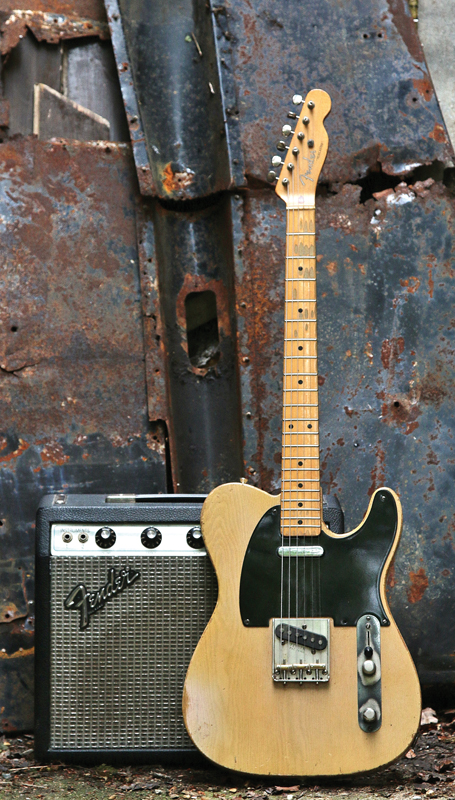 “A good old Tele is a must-have in most people’s collections. I have several benchmark Tele players – Graham Coxon from Blur, for example. This butterscotch model is certainly vintage, but not age-consistent. The body and electrics are from ’52, while the neck is one of the first reissues from the early 80s.”

“Judging by the scuffing around the control plate, it’s certainly done some work. I used this one on our new single, called The Fall. I write a lot with a bass guitar at home, so there’s always a need for the odd bass; these two Fender Precisions from ’65 and ’75 are my favourites. Like a Telecaster, they just do it, don’t they?” 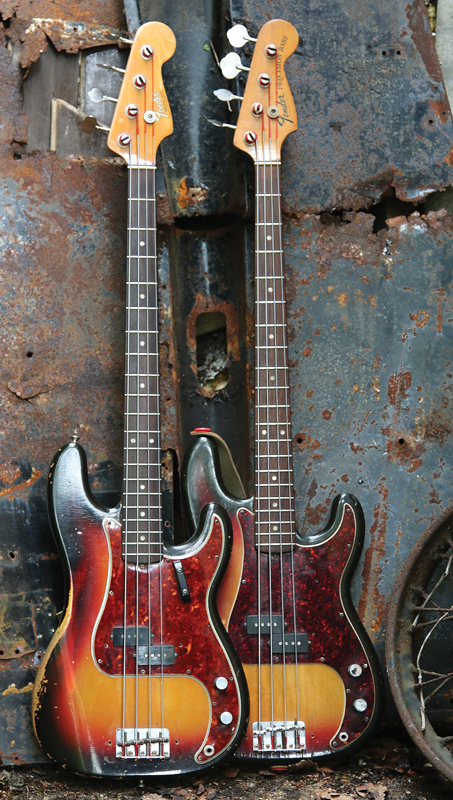 “Ah yes, any large semi, really, but if it’s a Gretsch I dare not operate machinery or drive,” he says, laughing. “There’s just something about these big guitars, they look and sound so good. When I saw Billy Duffy from The Cult with his White Falcon in the mid-80s, I just thought it was the coolest guitar I’d ever seen. I’ve had several pass through my hands, having settled on these next three now for several years. 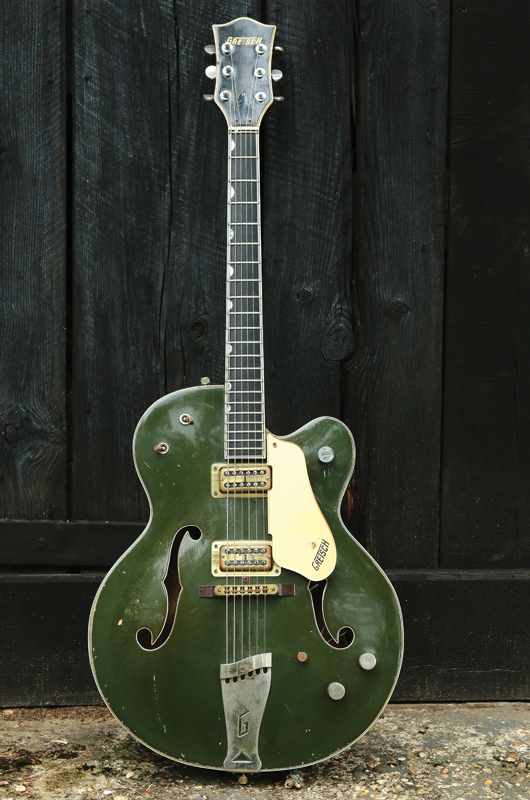 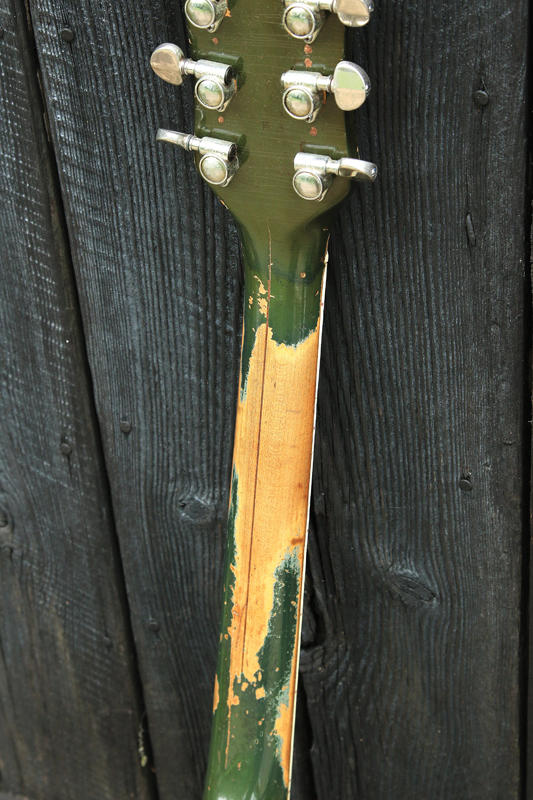 “My ’62 Country Gent Thinline has been a real player’s guitar and ticks all my boxes, Cadillac Green, gold hardware and played within an inch of its life. It’s still as strong as an ox, though, and sounds beautiful. I’ve always thought that if a guitar looks like this, it’s been someone’s number one, so it has to be good.” 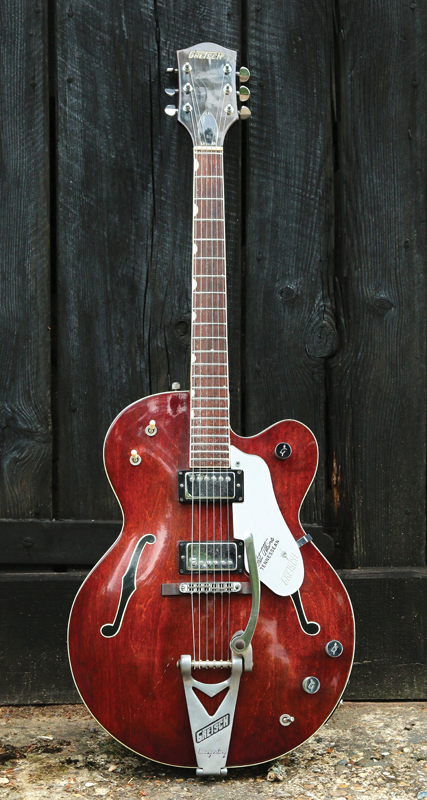 “This ’65 Gretsch Chet Atkins Tennessean is a little cleaner. As you can see, it’s been fitted with Gibson humbuckers –hence it was a lot cheaper – but it really appealed. I may at some point return it to the original spec, if I can source some original low-output pickups.” 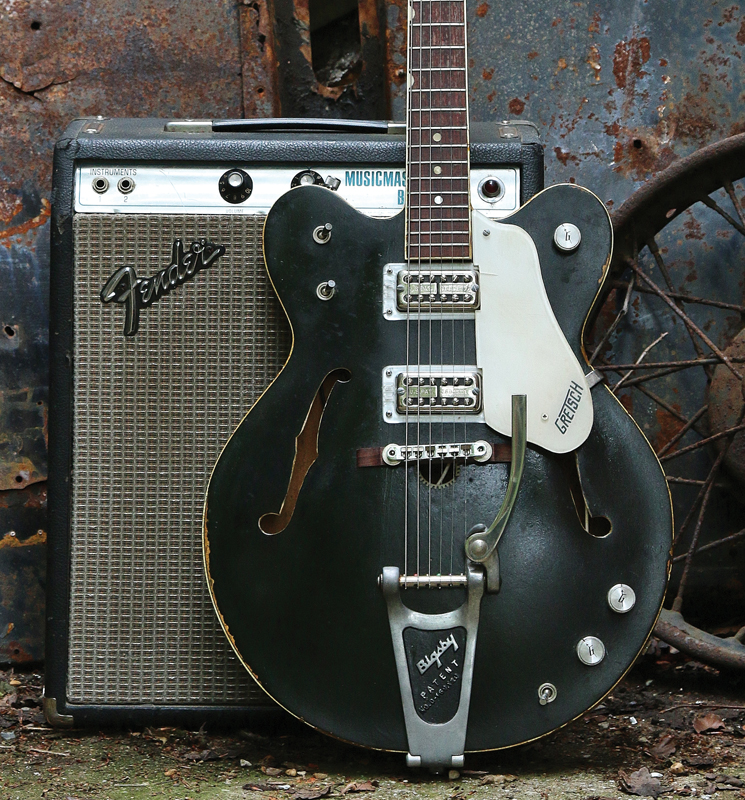 “This double-cutaway Gretsch Black Hawk from ’68 is a little rare. I think it was only in production for about a year. Again, it’s been bashed about quite a bit, with paint dabbed here and there. Some of the parts have been changed and the bindings have the classic ‘Gretsch rot’ – which I’m looking into – but it just has so much character, visually and sonically.”

“Over the years, these old guitars have probably been used for all styles – I’d love to know some of their history. I bought this one from a guy in Liverpool.

“I love the big, twangy Gretsch sound, especially drenched in reverb and echo, with lots of vibrato going on. I’m quite vigorous with the Bigsby, it’s a big part of my sound. I use very heavy strings, so I rarely have any tuning problems. I always thought that Bernard Butler was the king of the Bigsby…” 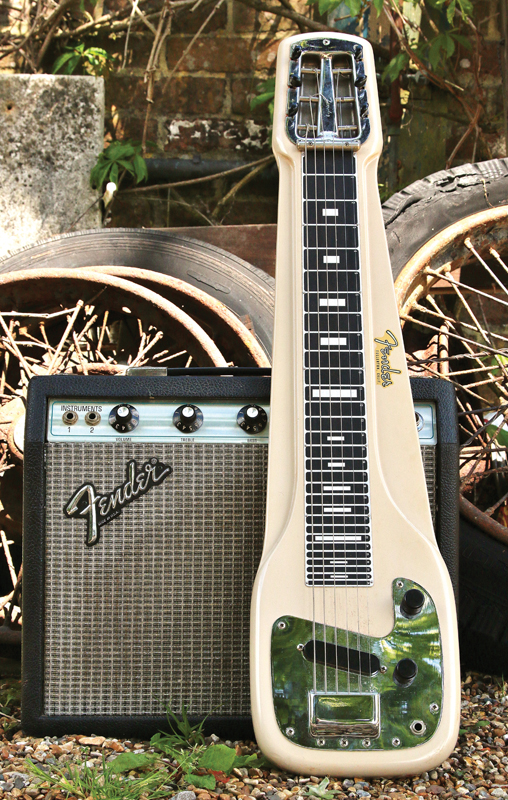 “For extreme ‘dives’, use this Fender Champ lap steel with a ton of wet effects. I love this guitar, and it looks cool finished in Desert Sand.  ”

“If you look closely at this ’64 Gibson ES-345 you’ll see the scars where it was once converted for a left-handed player, but it’s now back to its original dexterity, right-handed.” 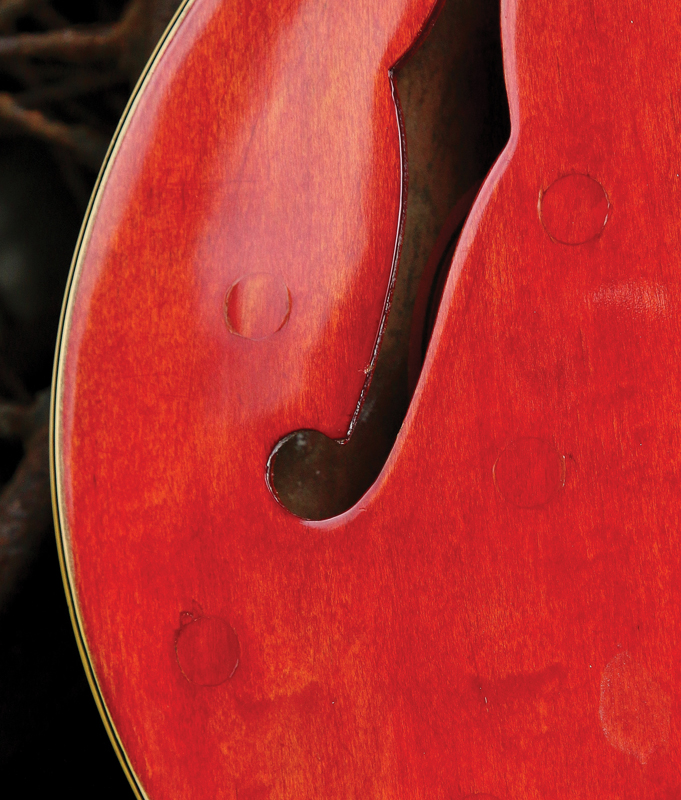 “It’s been bashed a bit, refinished and had some hardware changes, but I really don’t mind – I don’t have to worry if something has secretly been changed or if it’s original. If it was, I wouldn’t be able to afford to buy it. This relates to a lot of guitars in my collection.”

“I’ve been playing this Framus Strato Super from the mid-60s a lot lately. I think it has a bit of a modern vibe about it, and ideal for some cranking blues, Black Keys style.” 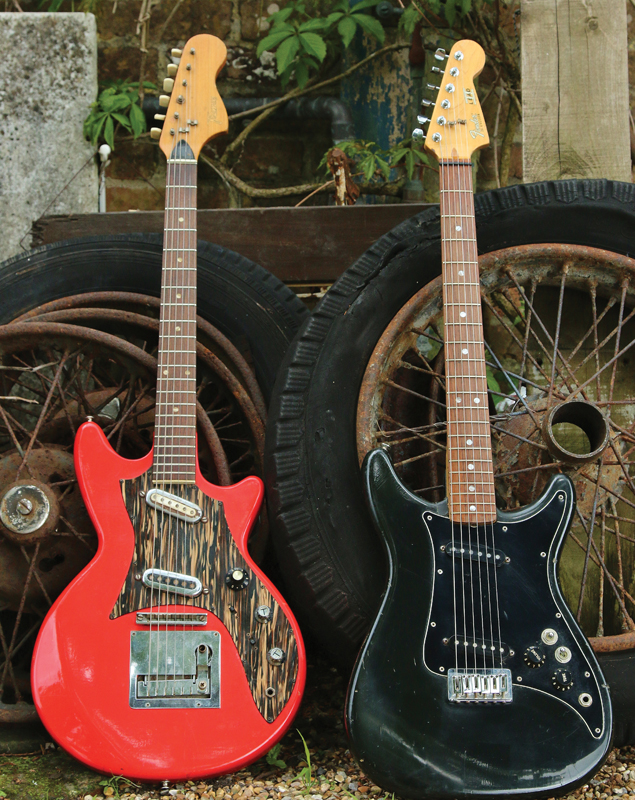 Most collectors have their favourite acoustic guitars as their main studio or live flat-top – or at least to tinker with late at night.

“I’d say this little Gibson B-25 12-string built in ’67 was a cool contender for that,” says Walter. “The neck looks far too big for the body, but there’s plenty of room for full chord shapes and it’s loud.” 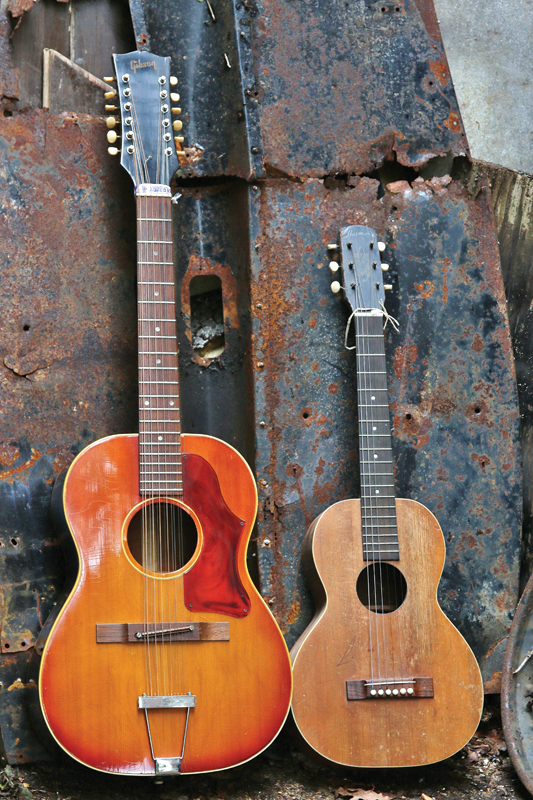 A big-bodied acoustic catches our eye, but there’s no name on the headstock. 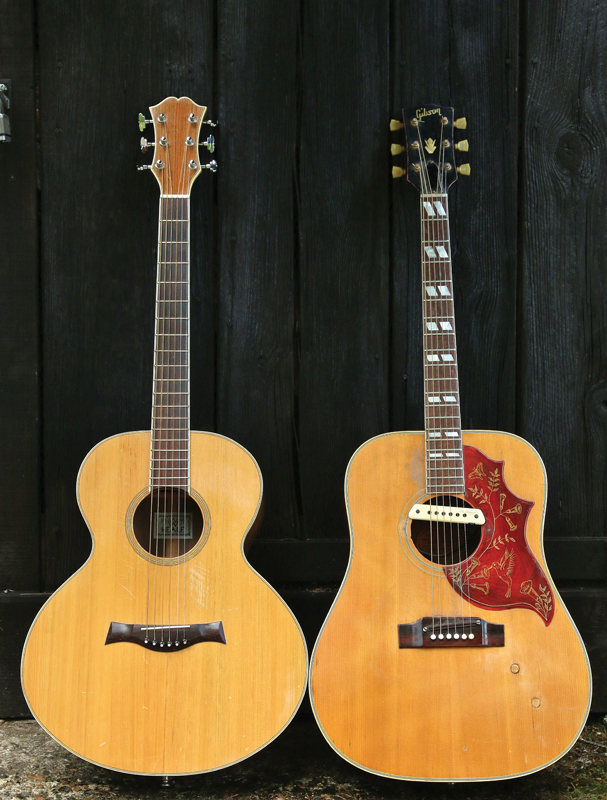 “That’s right,” says Walter, “The name is inside the soundhole, it’s my name, because I built this one myself in the mid-90s.

“My Dad was an instrument maker who specialised in making early stringed instruments like the viol, also known as a ‘viol da gamba’, which is similar to a cello. I learnt a lot about the construction of those wonderful instruments from my dad. It all looked promising, so I went to the Newark School of Violin Making, but  I lasted a year before I decided to go out on tour.”

“I was influenced by the Lowden brand and large Gibson models for my homegrown model – using Russian pine for the soundboard and walnut for the body. Dare I say, it sounds really nice and turned out OK.”

“Here’s a cool Gibson Hummingbird from ’65, which was owned by a country and western singer called Jeneene West. It’s been played forever – lots of wear and repairs here. Notably, the two dowelled holes where the controls have been taken out of the soundboard.”

“But, like I mentioned earlier, I’m not at all worried, as I’ve purchased all my guitars for sonic reasons. As long as they play OK and sound the part then I’m happy, regardless of the condition of the cosmetics.”