It’s all about the bass for Nick Smith, with the emphasis on imaginative design and great quality. 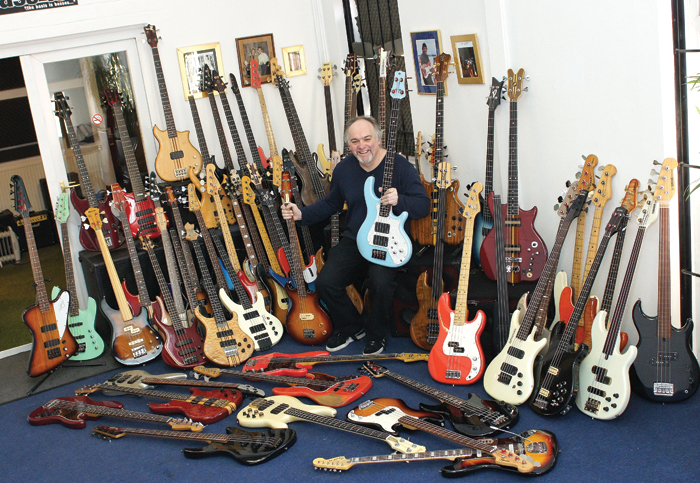 Nick Smith has been a pro bass player since 2001, doing theatre jobs and working with a multitude of bands, many rooted in the 60s. Inspired by his musician father, Stuart, he began his career in a rock ’n’ roll outfit called The Mick Lemmon Band, and eventually found his niche in the scene surrounding The Shadows, going on to work with names such as Mike Berry & The Outlaws, John Leyton & The Flames, Jet Harris and Brian ‘Licorice’ Locking. So is his collection all about Burns and Fender? Far from it…

“The golden age for bass players, for me, was the 80s and 90s,” says Nick. “We’d been stuck at the back for so long, but suddenly all these people were exploding into view: Mark King, Sting, Mick Karn, Pino Palladino, John Taylor…

“It was a great time for bass design, too. Luthiers were thinking about basses as a separate entity, and I’m a big fan of UK custom builders of the period. The Japanese instruments were also excellent – I am particularly keen on the various brands that came out of the Matsumoku factory.” 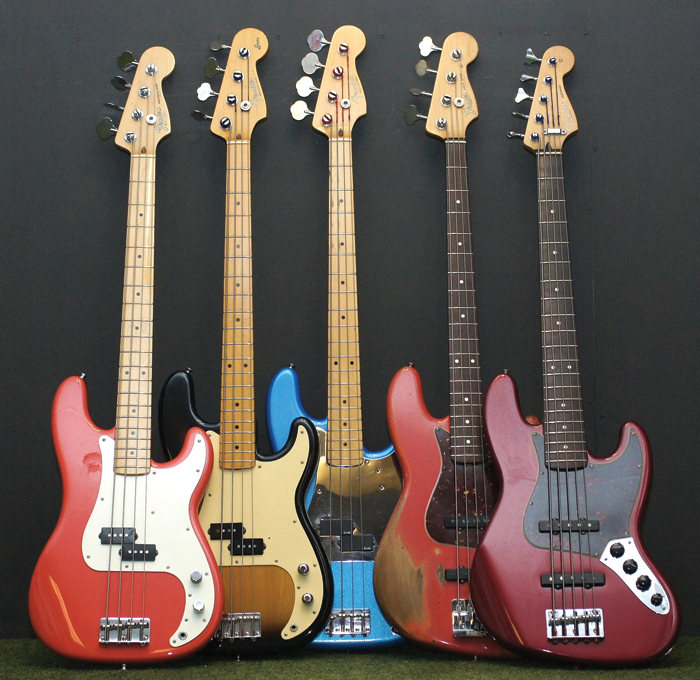 There are plenty of traditional basses here, though. “For me, the Fender Precision is where it all started. It’s like the founding father of bass. My second bass, when I was 13, was this ’83 Precision, which I had sprayed Fiesta Red for that Shadows look. I also have a 1982 Squier JV, one of the first ones with the small Squier and larger Fender logos – I used this one with Mike Berry & The Outlaws – and a sparkly blue Precision from the 1990s.

‘The Fender Jazz is, of course, another classic; I have a Fender Road Worn fitted with a Babicz bridge, which I use for teaching, and a five-string, which is really good for reggae. 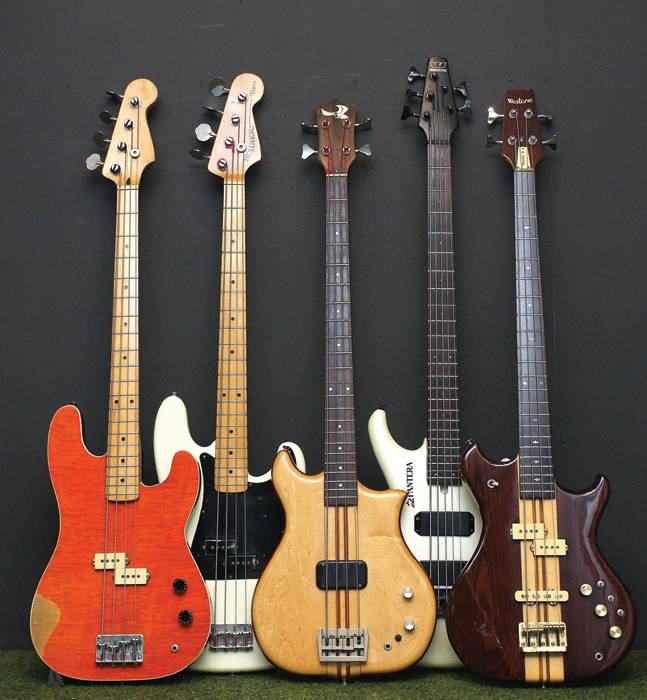 “The next five are a contrasting bunch – an orange flamed 80s Tokai with a single DiMarzio, a white refinished Hohner, which belonged to the bass player in my dad’s band, a Kawai which shows a big Alembic influence, a five-string Westone Pantera with close string spacing, and a Westone Thunder II with a lot of Aria similarities. 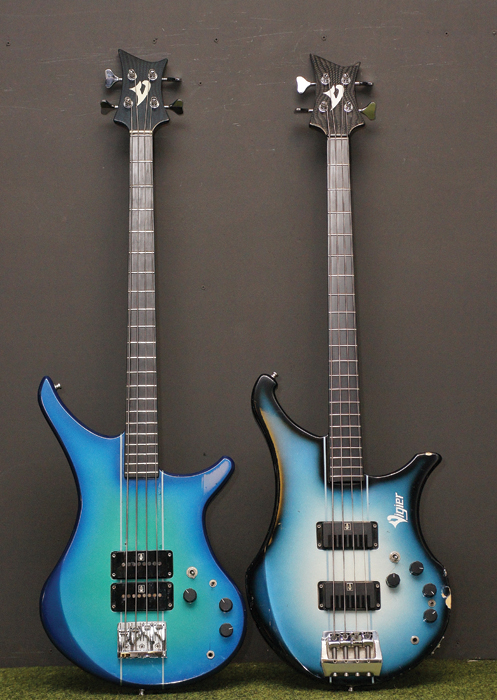 “These French Vigier basses are pretty exotic. I have a Passion model, and an Arpege, which was my main bass for years – great to play, and it has no dead spots at all, thanks to the neck design.” 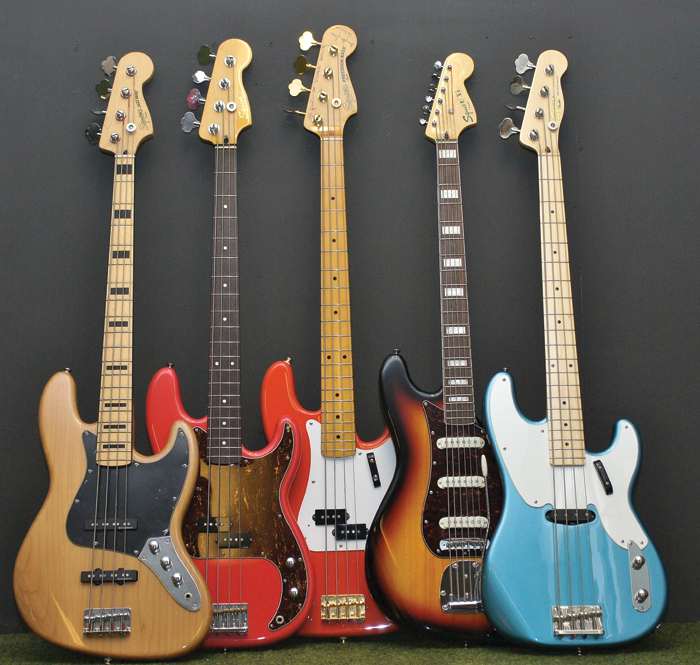 It’s back to Fender for our next handful. Nick continues: “I have a Squier Classic Vibe Jazz witha natural finish. Then there’s a Fiesta Red Squier Classic Vibe 60s Precision with a tortoiseshell scratchplate, which is pretty cool, plus another Squier JV Precision – a ’57 model in Fiesta Red from 1983, which has been signed by several bassists who played with The Shadows. The Squier Bass VI is a recent addition; my dad had an original, which I used to play, so this was a nostalgia trip. Finally, there’s a Classic Vibe 50s Precision in Metallic Blue. Squiers are good value. I’m not a badge snob by any means – I’ll happily gig with any one of them. 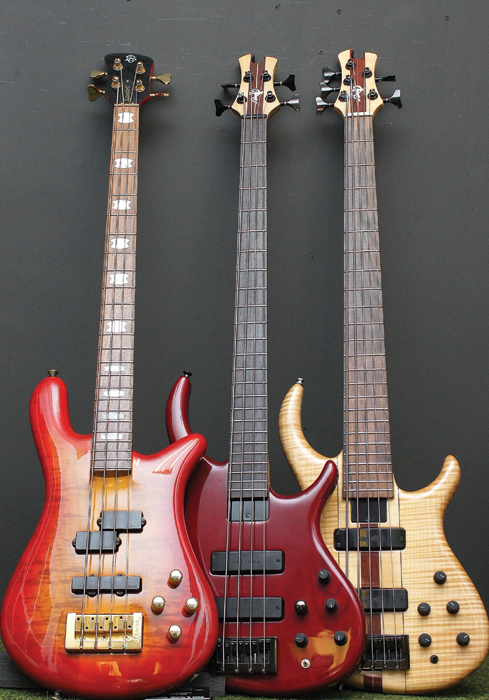 “I’m a massive fan of Chris Squire of Yes, and he uses Tobias, another favourite brand of mine. I have a five-string Basic 5, and a four-string Killer B. On the left, that’s a Spector NS2.” 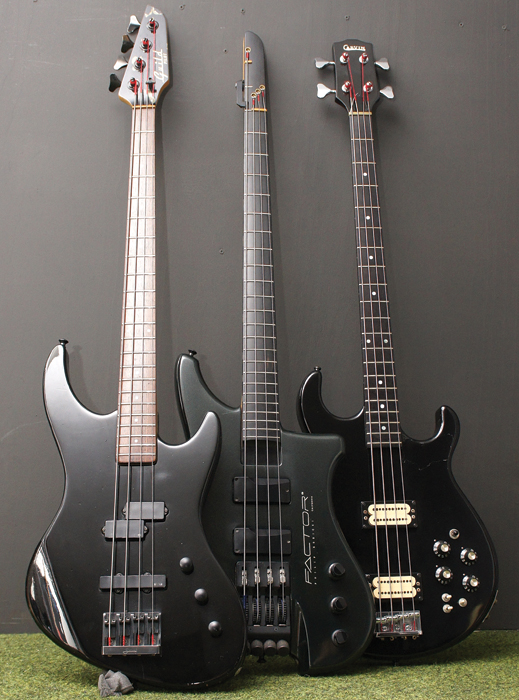 The black trio display more of Nick’s varied tastes. “The Guild Pilot is a bass I always adored,” he explains, “while the Kubicki Ex Factor has the drop D tuner on the E string. Kubicki worked for Fender for a while, but left to design his own basses. His company was later bought out by Fender, so this is actually a Fender Custom Shop bass. On the right is a stereo Carvin, as played by Ben Orr with The Cars at Live Aid in 1985. I love the look of it! 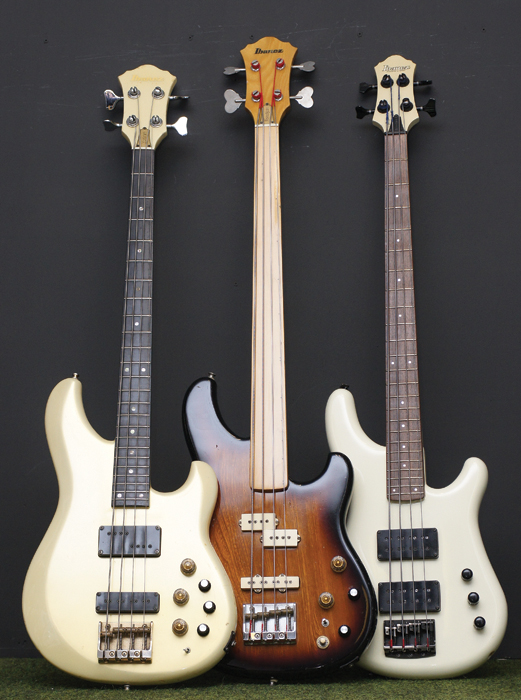 “Ibanez produced some of the best basses of that period. I have an ’82 Ibanez Musician in Pearl White – as played by Martin Kemp in Spandau Ballet, a sunburst fretless Roadster with a maple fingerboard, and a white Roadstar. 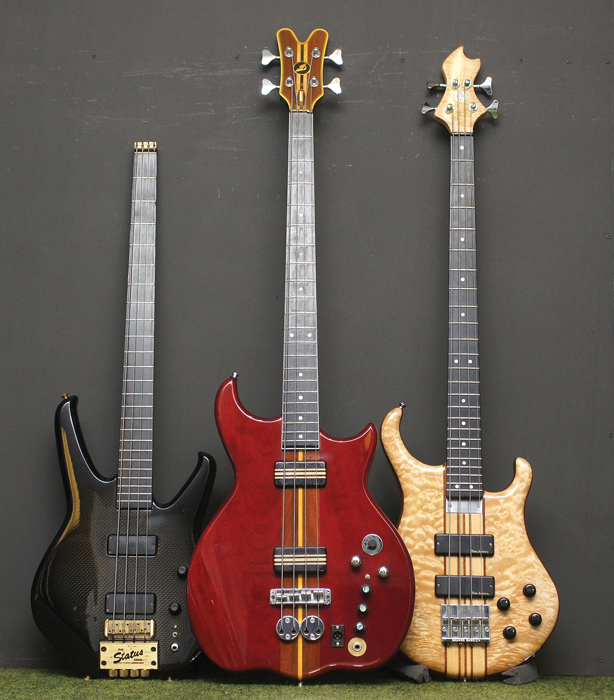 “Status Graphite made some of the most recognisable headless basses. I’m a huge fan – I had nine at one time! The Jaydee Classic is a replica of the 0002 model that belonged to Mark King; I owned that one for a while. And next to that is an E Bass, which I built in collaboration with Ian Hancock; we went into production with it in 2000. It’s got Kent Armstrong pickups. I must say, it’s a cool bass, and it had some pretty good reviews.” 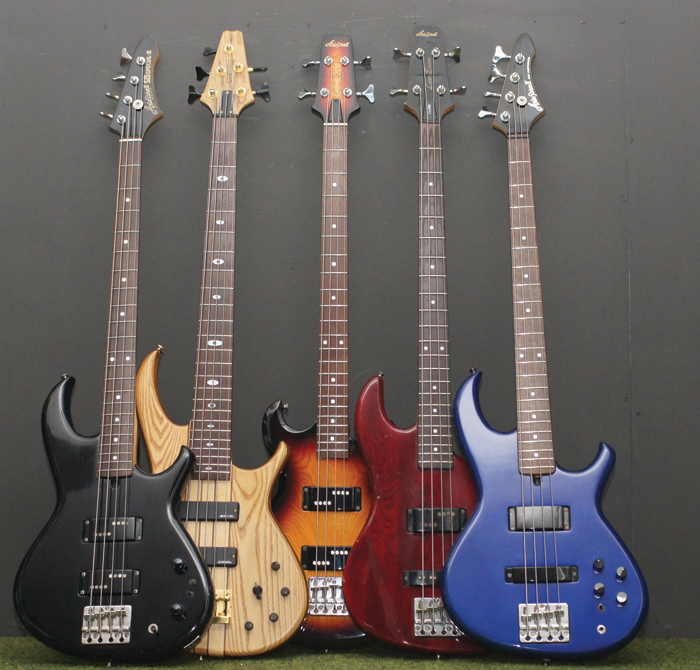 “Arias have a lot of significance for me, and here are five – a black SB Special Two, a five-string SB-505, a two-pickup Cardinal CSB Deluxe, a Classic Laser bass, and a blue RSB Performer.” 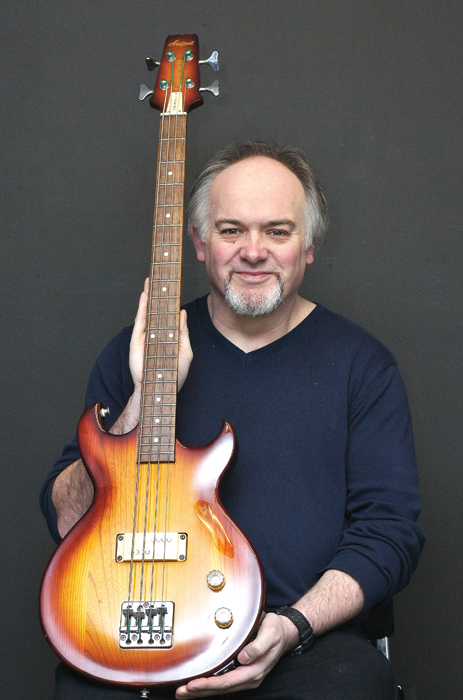 Nick is pictured holding the Aria that began his passion for the brand. “As a youngster, I tried a Jazz and a Precision, but they were still far too big for me, so I settled on an Aria Pro II Cardinal Series CSB450 in Cherry Sunburst, which cost £130. Later on, I traded it in for a Precision – they valued it at £130! And five years after that I was driving past a music shop window and saw my old CSB450, so I bought it a second time… for £130!’ 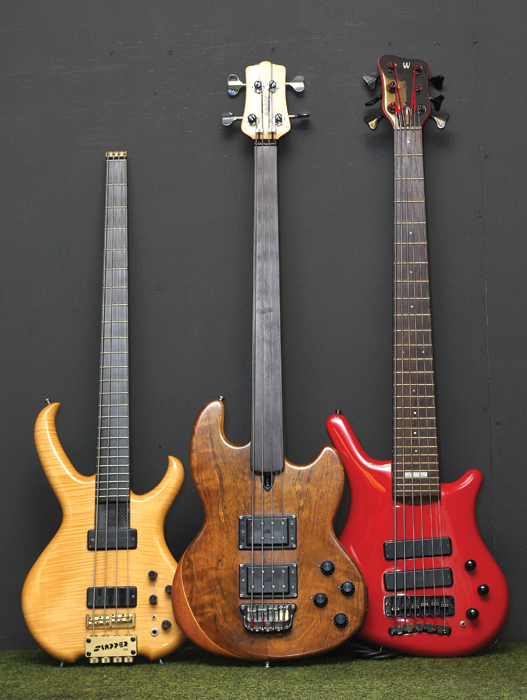 These basses come from the UK and Germany. “My fretless Wal dates from 1984… it was the session player’s ultimate choice at the time. The big six-string Warwick was built for the Bass Centre in LA, and it was used by Mario Cipollina of Huey Lewis and the News.” 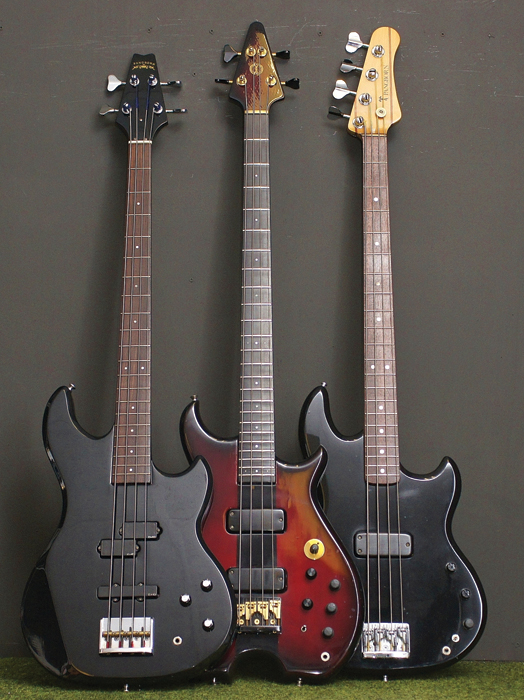 Here are three custom basses by the UK’s Ashley Pangborn. “Ashley was based in Dulwich in London,” explains Nick. “Pangborn is one of those near-forgotten brands, but he was doing great things. All these are active through-neck designs… a Warrior, a Warlord and a Chieftain.”

The next four are a real mixture. “I had this Bluesman Vintage specially built for me by a guy called John Scott in Tennessee. It’s based on a Fender, but I worked with him to fine-tune the details, and he finished it in Fiesta Red. I’m really pleased, and it’s really light, too. 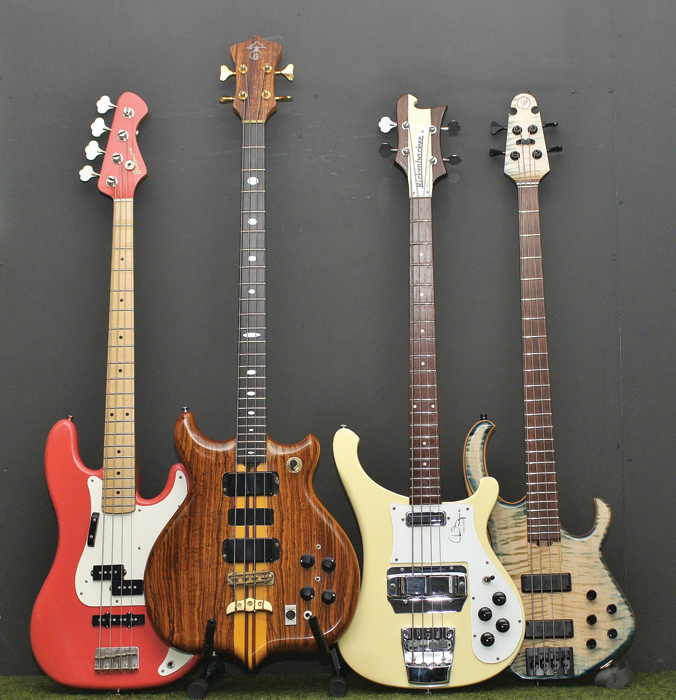 “Alembic paved the way with through-neck designs, active EQs and exotic hardwoods, and Mark King and Stanley Clarke were known for playing them. This one lacks a serial, but I believe it’s from around ’73 – it could even be the very one in some photos I have of John Entwistle. It might have been a special order. It’s heavy to gig with, but a classic.”

“I mentioned Chris Squire of Yes earlier on. In the psychedelic years, he would paste different layers of flowery wallpaper on his Rickenbacker 4001, and when the time came to remove it he took it to a luthier in Soho, Sam Li, who had to plane it all off! That meant it had a thinner body, and Rickenbacker copied that feature on his signature model. I’ve had mine for 20 years, and I love it.

“I also have this handmade Skjold bass from Warsaw, Ohio, with a Denim Blue flame top… a really well-made bass that sounds stunning.” 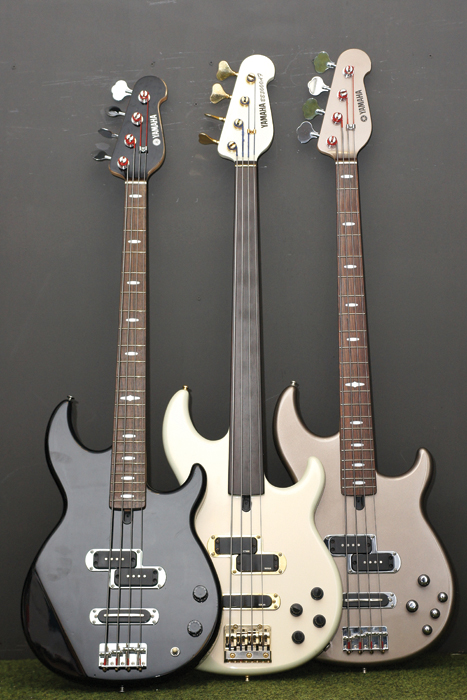 Next we have Yamahas. “Yamaha were up there with the best of them with their BB Series basses. The white fretless is a BB3000AF with a through-neck, and the Metallic Silver one is an active BB614. 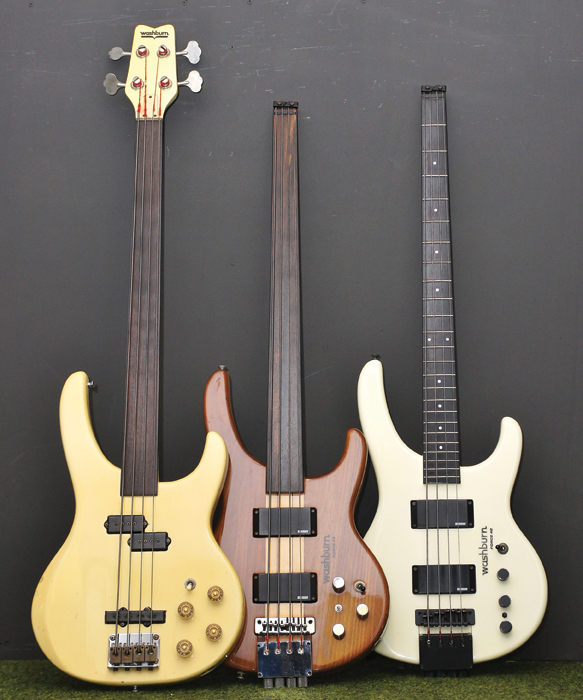 “Washburns were always high on my wish-list as a youngster. I have a Wing Series Vulture and a pair of Force 42 models, with the same body design, but headless – one fretless and one fretted. These are all great quality, made by the Matsumoku factory… I picked them both up on eBay. 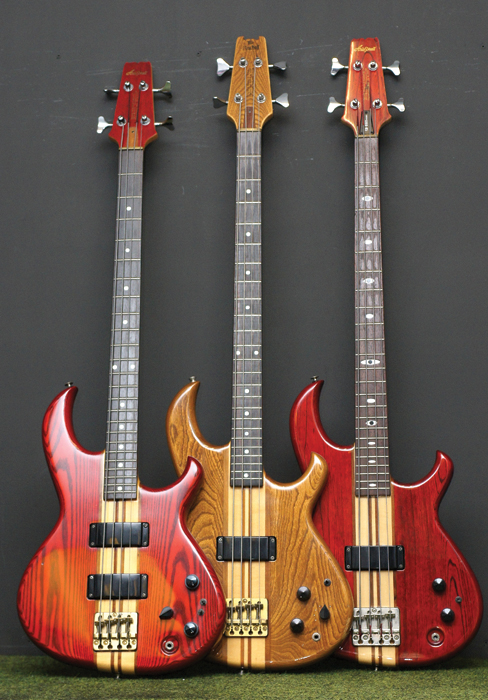 “John Taylor, of course, used to use an Aria SB bass. All the girls liked Duran Duran; all us guys said they were rubbish, but secretly we were big fans! These days, I have three SBs – a two-pickup model, which to the best of my knowledge is an SB-R90, though it’s missing a number, a single-pickup SB1000, and an SB-R60. To my mind, these are some of the best basses ever made… to make one of this calibre now would cost thousands. Finally, three more of my Yamahas… a BBG4 with a photoflame top, a black BB400S fretless, and a silver RBX374.”

Nick’s collection displays a great combination of classic Fender-influenced bass design and 80s forward thinking, so where does he feel the future of bass design lies? “Well, while the 80s and 90s is my main area of interest, I do look at new designs, and I think some of them are cool,” he reflects. “All the same, a lot of makers are still looking back to some of the timeless designs. Look at Music Man… they’re still as popular today as they were in the 70s, and still influencing players today.”