During the late 80s, Liverpudlian Paul Hemmings enjoyed spells in The La’s, and later The Lightning Seeds. We take a tour of his guitar collection. 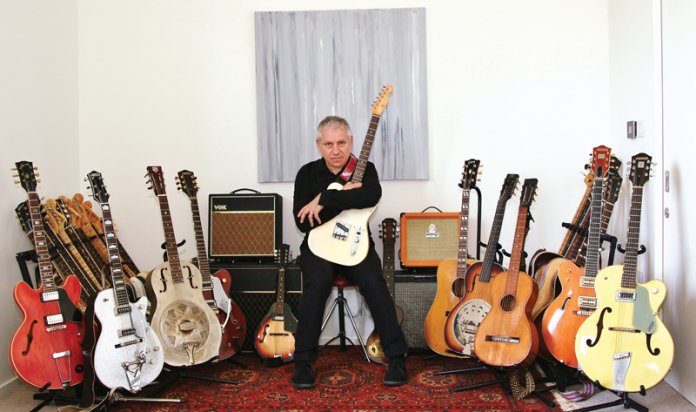 “This was a very creative period,” recalls Liverpool-born former The La’s and The Lightning Seeds guitarist Paul Hemmings. “My mainstay guitar and sound for a long time was the jangle of this Gretsch Tennessean, which didn’t leave my side. I used it extensively in The La’s, having purchased it from John Robb from The Membranes in the mid-80s.” 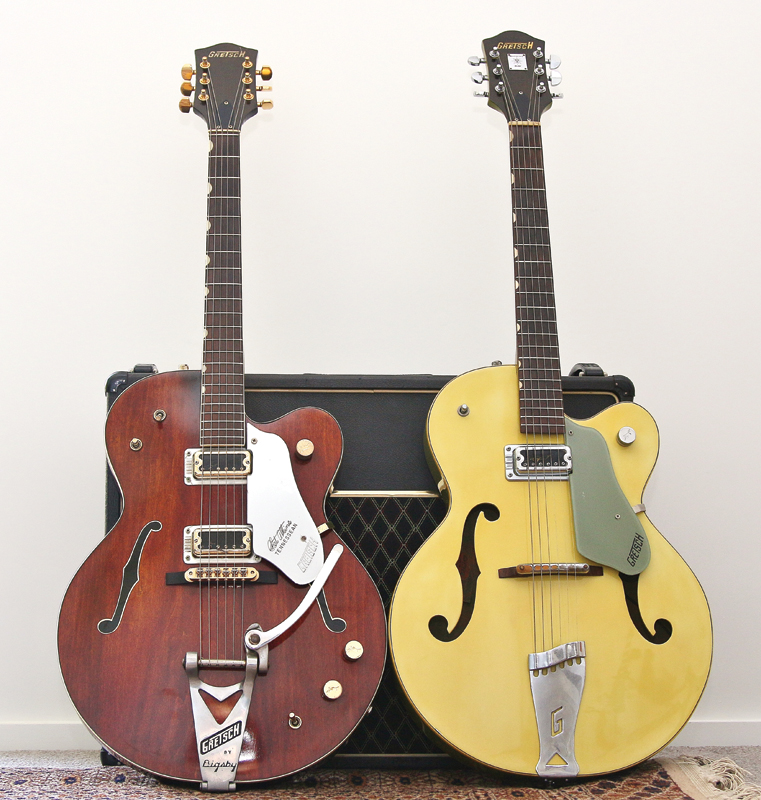 “I was at college at the time, so thankfully he agreed to £50 instalments. I particularly wanted a big-bodied semi and a Bigsby vibrato, which I love and still use a lot.”

“The La’s’ singer/songwriter, Lee Mavers, had a 1960 Anniversary 6125 Gretsch. It was so bashed he called it ‘The Grotsch’. The previous owner had cut a gaping hole in the top to fit a pickup, which was held in with blue insulation tape. Both our guitars had the old machineheads, which slipped badly during those hot, sweaty early club gigs. You can hear us taking ages to retune on some of the live recordings.”

“I eventually acquired Lee’s guitar and decided I had no other option but to have it restored, as it was in such a bad condition.”

“So here’s The Grotsch today after an amazing rebuild by KGB Music in Birkenhead, Liverpool, now fitted with the correct pickup and two-tone green finish.”

“KGB did such a good job, I use them all the time for all my guitar work. This is a fantastic-sounding jazz guitar; I also used it when I was in The Onset with Mike Badger, who founded The La’s, and then in The Lightning Seeds for the video of the song Perfect. Mike Badger and I own The Viper – a record label, which we started in ’99. It keeps me energised and challenges me to play in different ways. I actually bought this Gretsch Chet Atkins for its Filter’Tron pickups and its Eddie Cochran looks. It just has that wonderfully authentic 50s rock ’n’ roll, 60s Buffalo Springfield sound.” 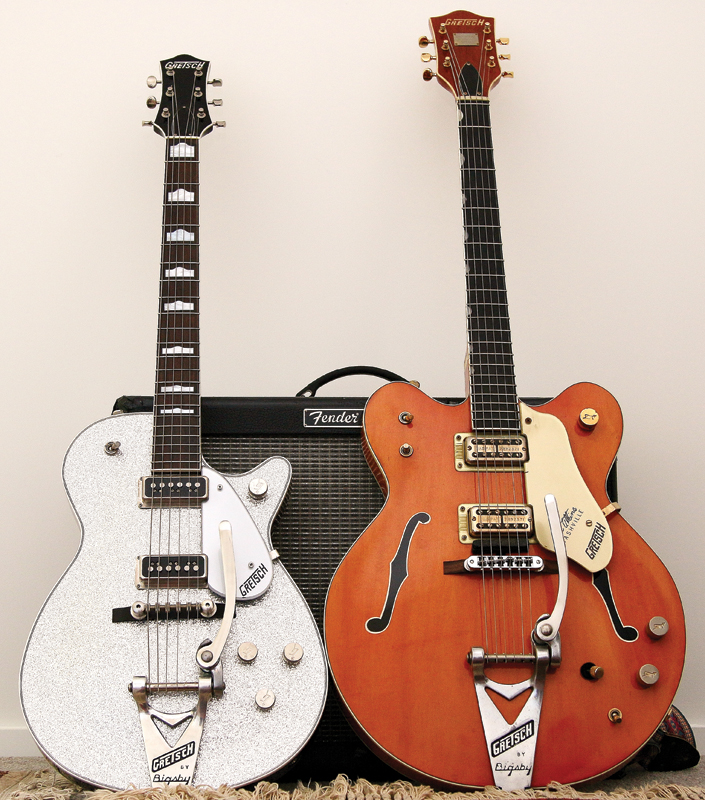 “I also have this solid-bodied Gretsch Silver Jet from the Jet Series, which I use a lot. I’ve been using this guitar in the studio with Tommy Scott from the Liverpool band Space, working on an album due for release in 2016. The body is akin to a Les Paul. I’ve always loved that shape, but I’ve found I can’t get on with many Les Pauls because of the weight and the thicker, muddy humbucker sound.” 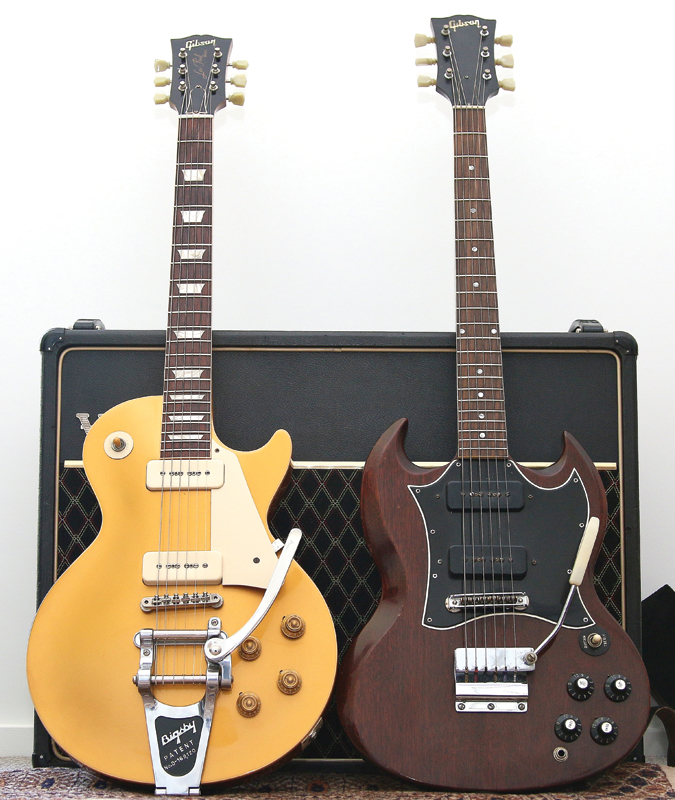 “So the Silver Jet, loaded with a pair of DynaSonic single coils, ticked all the boxes, until I bought this Gibson ’56 reissue Goldtop with a pair of P-90s. The specifications are the same as 60 years ago. The bottom line is that they are clear and chimey played clean and great when used with overdrive. I love the sonics, the higher single-coil permutations of the pickups are perfect, and the weight is bearable – and, of course, I fitted a Bigsby. I love this guitar.”

“Here’s a worn 60s SG Special, also with a pair of P-90s. I’m not too precious about throwing this one around, as it’s already been to hell and back. This reissue Gibson Melody Maker has the same vibe; it’s quite modern, but with a convincing aged finish and authentic vintage neck. It plays and feels like an old one – great for slide and those Johnny Thunders-type sounds.” 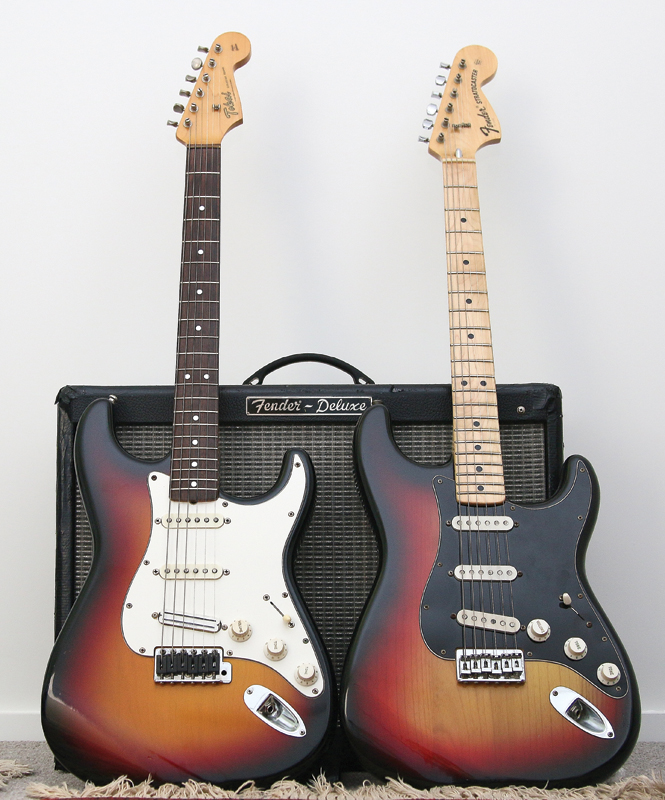 “Back in the early days, Tommy Scott and I somehow acquired a small PA system, which we hawked around every music shop around Liverpool to get rid of. The very last one said he’d trade it for
a mid-80s Tokai S-type hanging on the wall.”

“Neither Tommy nor I wanted an S-type, but we’d had enough of carrying the PA around, so we did the deal. I’d previously tried some Strats when The La’s got a record deal, but wasn’t that impressed, but I loved this Tokai, and used it many a time in The La’s and The Lightning Seeds.”

“I’ve since installed a beefy Seymour Duncan Hot Rails in the bridge position for a little extra output, and Graph Tech String Saver saddles. Unlike a Bigsby, I seem to have tuning problems with Fender vibratos, so I get KGB Music to set them up without any movement.” 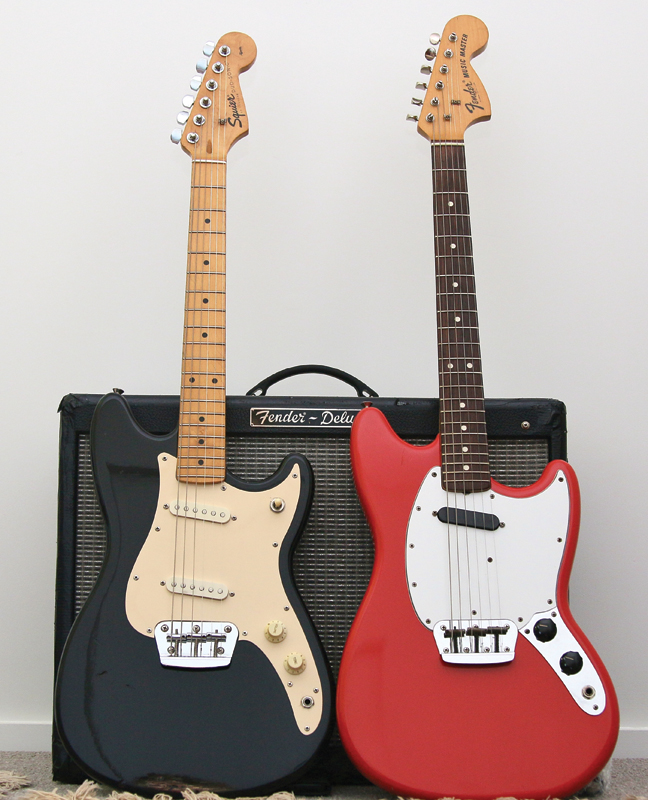 “I originally bought this short-scale Squier Duo-Sonic for my son. He’s played it a little, but I’d like to say it’s mine now,” Paul laughs. “Well at least ours, as I’m using it a lot. I love the classic no-nonsense vibe about it.”

“It’s hard to fault this guitar for the price. It’s lightweight, but there’s plenty of resonance going on from the simple bridge. The same unit is on this Fender Musicmaster, which is similar in design and another legendary Fender from the 70s, and refinished in what I would describe as a Shadows Orange. I call these two my TV guitars, as they easily fit into your body whilst watching TV. I’d pitch these somewhere between a Strat and a Tele.” 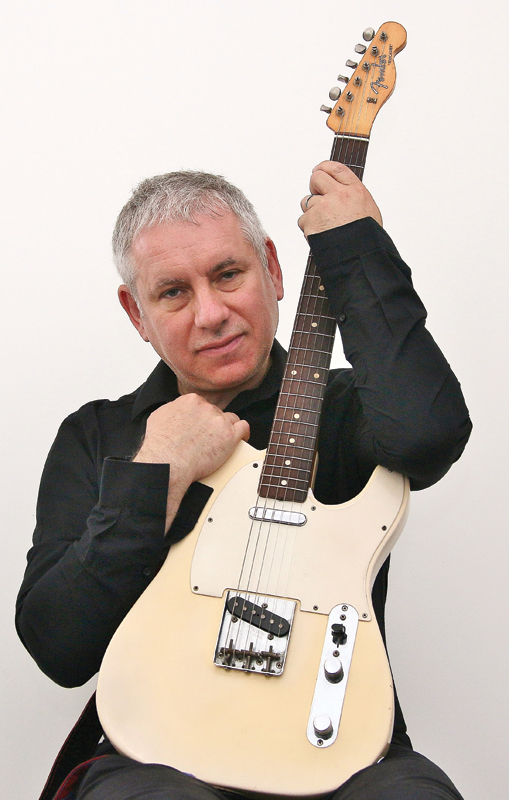 “I used to have several Mexican and Japanese Telecasters, but I decided to trade most of them for a really good vintage model. It took a while to find the one for me, ending up with this Olympic White model with a rosewood fingerboard, dating from ’61. This guitar squashes any previous doubts I had about pre-CBS Fenders sounding better than modern ones. It must be an age thing within the woods and the electrics. It’s not a myth – financially, I wish it was. This is a magical guitar.”

Next up, Paul produces what we initially think is a Les Paul – until we look  a little closer. 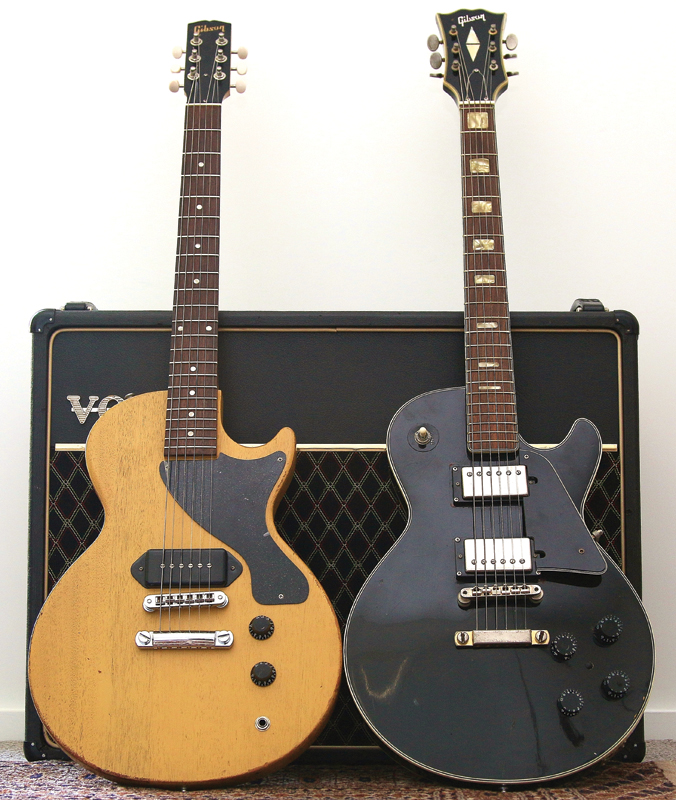 “Ha, well it’s a copy,” he admits, “probably a Columbus or Avon from the 70s. I included it here, as it was my first guitar, which cost just fifteen quid from a junk shop – complete with free ‘Gibson’ headstock sticker. It was in a bad shape, and someone had carved ‘Status Quo’ in the back of the body. I almost sold it recently, but my wife discouraged me. I’m glad, as this guitar holds a lot of personal memories.” 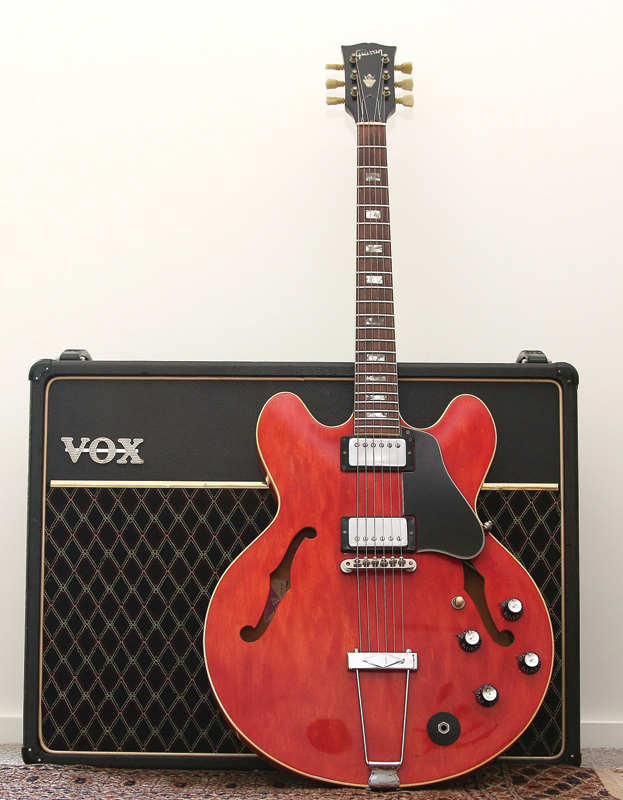 “As a youngster, I thrashed away to records my mum used to play. I owe all my musical influences and aspirations to her. Classic cuts by The Beatles, The Beach Boys, Ike and Tina Turner and The Rolling Stones. I didn’t know what kind of guitar Keith Richards used, but it sounded incredible.”

“I was very influenced by his melodic, rhythmic style of playing. I also enjoyed the punk movement – New Rose, the first single by The Damned, I thought was fantastic, amongst the many other wonderful songs from that era.” 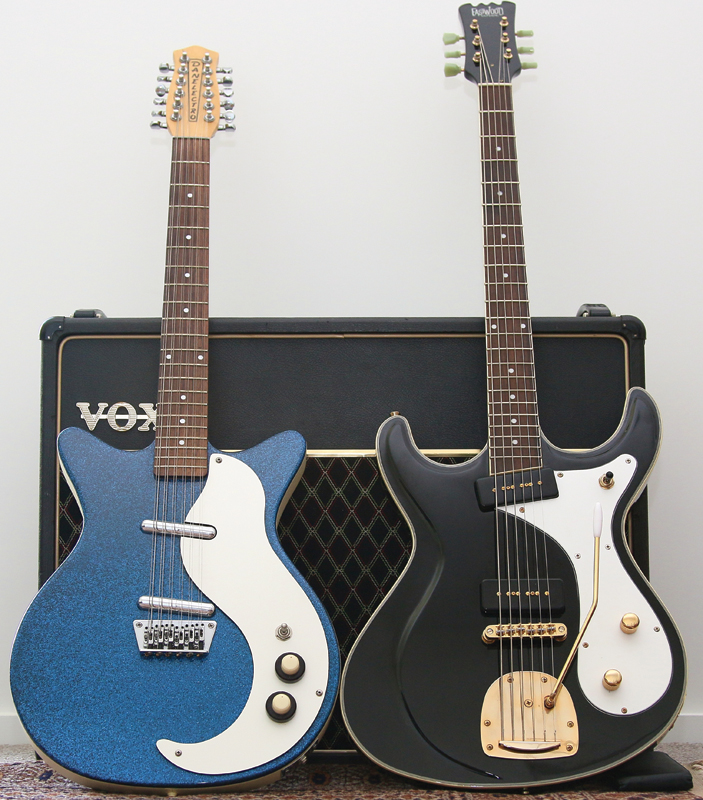 “I’m a fan of well-constructed songs. The guitar part is there to help the song along, whether it be a short catchy riff or a solo, both need to be tasteful. As a kid, my first concerts were Black Sabbath, AC/DC with Bon Scott, and Motörhead – all guitar-driven bands that weren’t self-indulgent like many from the 70s. I think punk sorted most of the rest out.”

As with most guitar gatherers, there are always a couple of acoustic favourites in the pile. 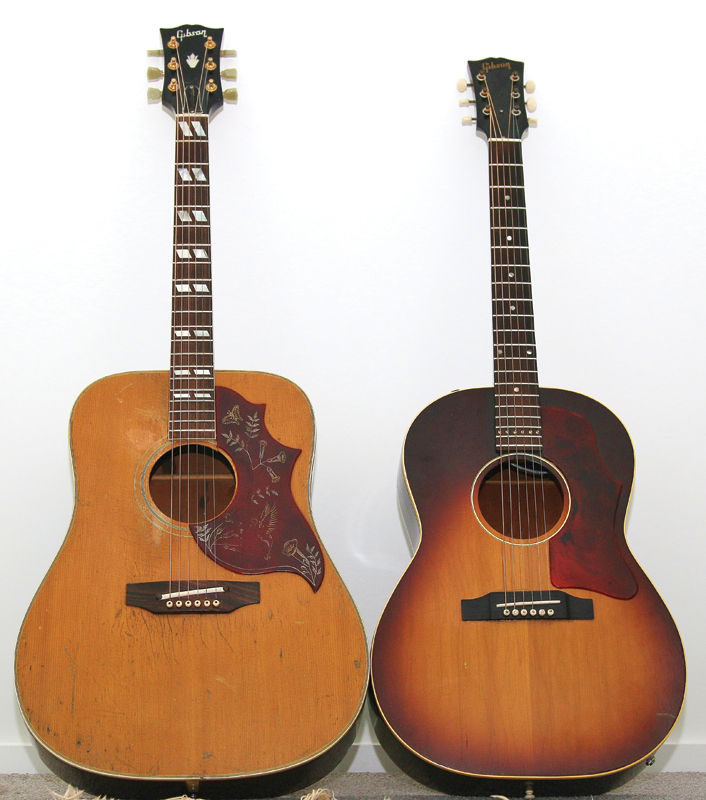 “I have several acoustics here. My ’68 Gibson Dove is battered and bruised now, but is still one of the best acoustics I’ve ever played, and like this 19-fret Gibson LG-1, is perfect for constructing songs. A previous owner had neatly installed a pickup at the end of the fingerboard, which sounds really sweet.”

“I used the Dove to co-write the theme music for the BBC drama series called Doctors, for which I was nominated for the Ivor Novello Award, so I was quite pleased about that.” 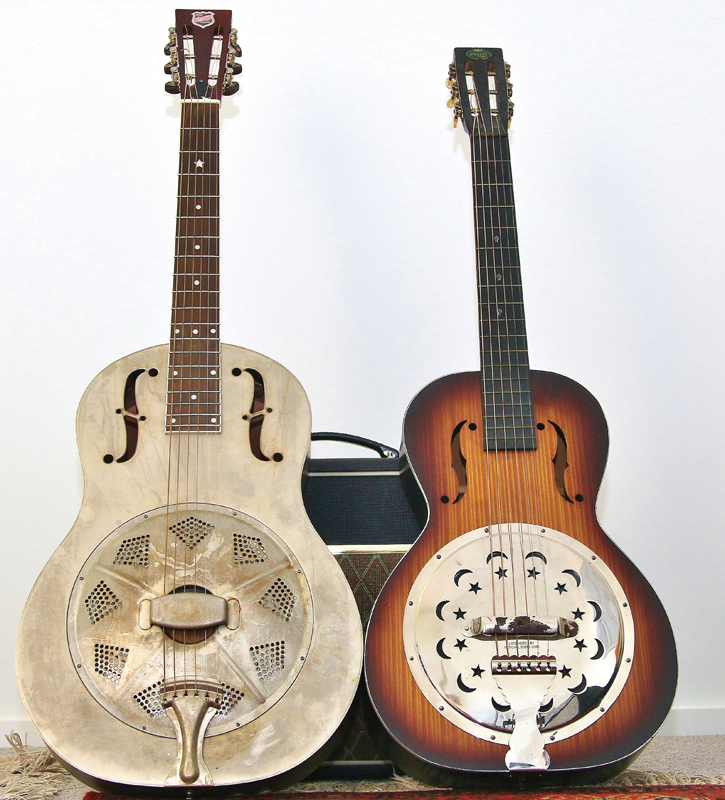 “I’d like a really nice vintage resonator, although I’m a little hesitant, as I’ve heard the necks canbe a bit iffy. This modern copy works well fitted with a bug, and I must have been lucky with this wooden-bodied, parlour model built by Regal during the 1930s, fitted with a Dobro resonator.” 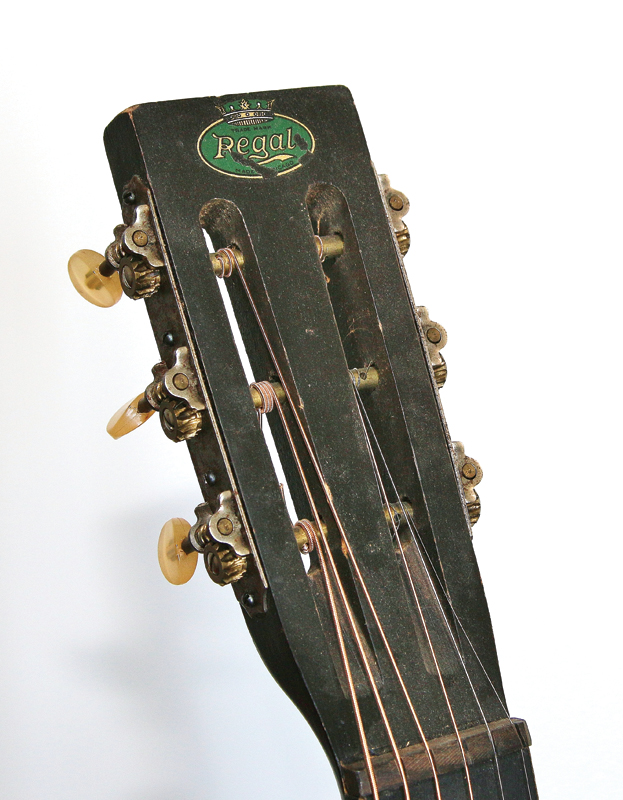 “It has a warmer sound, of course, and luckily the neck remains accurate and straight. I bought this one from the proceeds of selling off antiques that my uncle and aunt had in their cellar. As well as being an actor, he used to work on London’s Portobello Road, so there were some interesting items tucked away. Every time I play this one, I think of them. They were both real characters and special.” 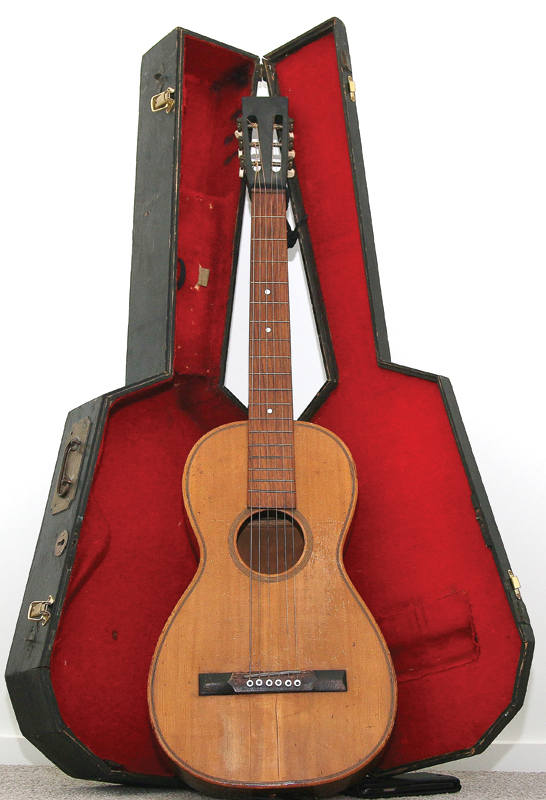 “I’ve been lucky finding some of these gems, although this little parlour beats them all hands down. You hear the stories about how a guy might try 10 Strats in a shop before he finds the right one. I’ve played several parlour guitars over the years, and they’ve always been a bit hit and miss, especially within the intonation. I can play a full barre chord up on the 10th fret on this one and it’s perfectly balanced and in tune.”

“I can’t see a visible brand or date, but I suspect it’s from around the late 1800s, probably built in the USA by an immigrant – the workmanship is amazing. This was an eBay purchase, which I bought for just £100, complete with original coffin case.” 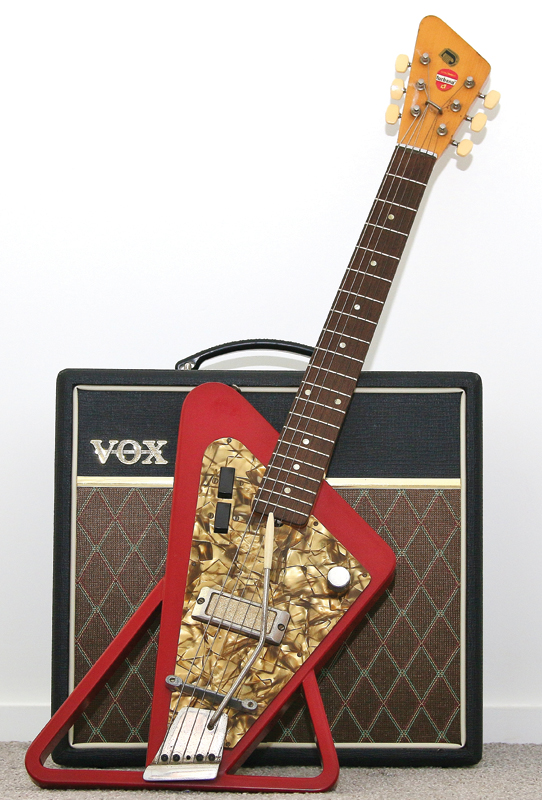 “I was hanging around Barcelona the day after a gig and saw this Czechoslovakian guitar in the window of a guitar shop. I’ve trawled the net, but can’t track down a model or name for this one either. I would say it’s from the 60s, judging by the Formica, and was originally complete with a plug-in mini amp attached to the body – sadly that’s long gone. It certainly has character… bit of a Rickenbacker jangle going on as well.”

“Some of my guitars have certainly seen a lot of smoky clubs, and been knocked about over the years. But as long as they play well, I’m not that bothered what they look like. They all have to sonically offer me something different, because ultimately they are bits of wood and tools of the trade at the end of the day.”