As the driving force behind Taran Guitars, Rory Dowling pours his heart and soul into his bespoke instruments. He takes us on a guided tour of his workshop.

Secret places are always the hardest to find. It’s their job to be hidden away so that finding them is an achievement. I certainly felt a rush when, after three phone calls and multiple u-turns, I eventually unearthed the discreet lair of Taran Guitars, which is tucked away at the end of a quiet country lane in rural Fife.

This is where the hugely talented Rory Dowling crafts his elegant acoustic guitars, each of which is tailored to its owner. Here, in a converted milking shed, he lovingly engineers his instruments to embody the playing styles of his customers who travel from across the UK, Europe and beyond to seek out his expertise.

They are an eclectic bunch of journeyman musicians and passionate hobbyists, who arrive at his door to track down the elusive tones of a custom-made guitar that has been tweaked and refined to their exacting requirements. This is a world where off-the-shelf six-strings simply don’t make the grade.

“My youngest client was 13,” says Dowling proudly. “He busked in Inverness until he could pay for the guitar, and when he came to see me, he came with his busking money in shrapnel. I love building instruments, but when a 13-year-old has committed the last two years of his life to buying one of my guitars – that is serious. I was touched, really touched. It was incredible.”

The young man’s commitment is all the more impressive when you realise Dowling’s guitars carry a standard price tag of around £3,000, with many of his clients opting for around £1,500 of extras such as arm bevels and silver purflings. Fortunately, the teenager’s skills, as well as his pockets, ran deep.

A student of the National Centre of Excellence in Traditional Music in Plockton, his journey to Fife – weighed down by coins – was merely a staging post in his career and the start of a profound friendship between luthier and patron.

Like many of his clients, Dowling forged a strong connection with his youngest customer and catches up with him regularly. This special bond originates from the extended consultation process that Dowling undertakes before building each of the 12 guitars he makes every year. It is a painstaking process of constant refinement and fine tuning that has earned him a 14-month waiting list for his special brand of musical consultancy and retail therapy.

“Very often the guitar we discuss originally,” he explains, “is completely different to the one they receive because the client has a much greater understanding of what they want as they progress through the process, and I have also had a chance to listen to them play. They often come back two or three times during the year, so the instrument they ultimately get is completely bespoke.”

This collaborative approach produces exceptional guitars with integrity built in. Each one is custom-built but they are all modest in their appearance and rich in their tone. As you reach for one, before your fingers touch the strings, you are aware of the deep bass notes that will soon waft around the pure, clean upper registers. Dowling’s guitars have a discernible presence just sitting on your lap.

To produce this understated elegance, Dowling works in partnership with his clients. But as he suggests, an important part of the process is watching them play. It’s a skill he has honed over the years and is just as important as any he employs at his workbench.

“I work on response levels, so if you’re a very light player, I can make the guitar respond really well to your light touch,” he explains. “Equally, if you are a heavy player,
I can make it respond to your heavy touch and have more headroom, which means you can thrash it and it won’t break up.”

Without drawing breath, he explains that a flatter soundboard creates a guitar that is easier to play because, relatively speaking, it is under less tension, which helps the strings vibrate. A more curved and therefore stressed soundboard, on the other hand, delivers more separation between the notes – which is useful for finger and
flat-picking styles.

“It’s complicated and I realise its complicated,” he says. “I generally don’t talk to people about curvatures. I talk about response levels, so that if one of my customers picks up an instrument and it feels a bit tight for them or a bit loose, then I get an idea of how I need to build their instrument. A lot of people don’t know I do this, because trying to explain it is really quite difficult, but it makes perfect sense in my mind.”

Dowling’s attention to detail, while bordering on the obsessive,  is nevertheless key to making Taran Guitars stand out (he French polishes the inside of his instruments because it stabilises the wood and it looks good). It’s a formula he has refined over 13 years following a fateful sortie into furniture design that resulted in a first class BA (Hons) degree and healthy loathing of the trade. “If I am honest, I never enjoyed making furniture because the bits of wood were too big,” he says plainly. “It was just carting about massive bits of wood. I hated it.”

His life was transformed when his cousin gave him the Jerry Garcia and David Grisman album Shady Grove, with the title song becoming the soundtrack for his rebirth as a luthier. “I became so obsessed with it that I wanted to make an instrument that I could play the track on. So I built an octave mandola. What can I say? I like making things. I thought it was the best thing since sliced bread, until I showed it to somebody who really knew about instruments.”

The fledgling mandola and Dowling’s first guitar projects were built from instructional books in his bedroom in Edinburgh, and were crude by comparison to his refined work today. His first guitar, which he named Lurch, was “totally overbuilt, had the bridge in the wrong place, neck like a baseball bat and was badly finished,” according to its creator.

However, it didn’t take long for Dowling to find his feet. By his third attempt, things began to click and the Taran brand, with its recognisable ‘t.’ headstock logo, was born. “I sold my third guitar for £700, which I thought was bloody good for a first sale,” he remembers. “Once I had sold the first one, I was already building the next ones, and it was at that point
I got a workshop in Edinburgh – that was it.”

Dowling moved to a converted milking shed in Fife nearly four years ago. Since then, his business has gone from strength to strength with the likes of Martin Simpson, Matheu Watson and Kenny Anderson (aka King Creosote) calling on the 32-year-old for his deft touch with wood and strings.

As if to underline his success, Dowling recently completed the five-fold expansion of his workshop, which means the inauspicious shed now opens up into a light and airy space full of industrial sanders and saws, each connected to a dedicated extraction fan. More interestingly, the place has been designed so the work benches can be stored away, creating a pop-up music venue. The inaugural Wood Shop gig saw Antipodean duo The James Brothers play their only Scottish date during a 2015 tour.

But all this expansion and diversification doesn’t mean Dowling will be adding to his workforce any time soon. “I think about that a lot, especially on a Monday at 2pm when I realise how much work I have to do for the week ahead,” he says.

“The thing about taking somebody on is my clients come to me because they want me to build their guitar. If I took someone on, I would have to train them to the same level as myself. While that is feasible – there are a lot of fantastic woodworkers out there – you’re not teaching somebody woodworking, you’re teaching somebody an understanding of wood, and that takes time.”

In fact, Dowling’s ambitions remain remarkably modest. “I would really like to continue what I am doing,” he says simply. “I’ll never be a Bob Taylor or Bill Collings, or produce hundreds of guitars a year. For me, it’s just about working with folk and enjoying it. I don’t want to saturate the experience for the clients, and by getting bigger I think you have to sacrifice something – and that’s what would go. You would lose the experience.”

At the far end of the Wood Shop venue, where the stage is lit up at night, Dowling has a consultation room in which he meets his clients during the day to discuss tone woods and listen to them play. Complete with coffee-table photography books, wood-burning stove and a comfortable sofa, this is a place far removed from the noise of the workshop. As Dowling suggests, it is a place of sanctuary.

“This room is important,” he says. “It’s a space where I can communicate freely with my clients and not be in a dusty workshop where they feel like they’re taking up my time because they’re in my workspace. This is a really important area in which people can relax and play. If you were ordering a guitar and wanted to come in and play it for 10 hours, you would be more than welcome.”

You get the sense that being self-trained, Dowling doesn’t recognise the same boundaries by which protégé luthiers might be limited. For instance, his latest innovation takes the recognised practice of creating double sides by gluing two pieces of sycamore together in the same curve to create a platform for the soundboard and back, and turbo charges it with an ingenious addition. 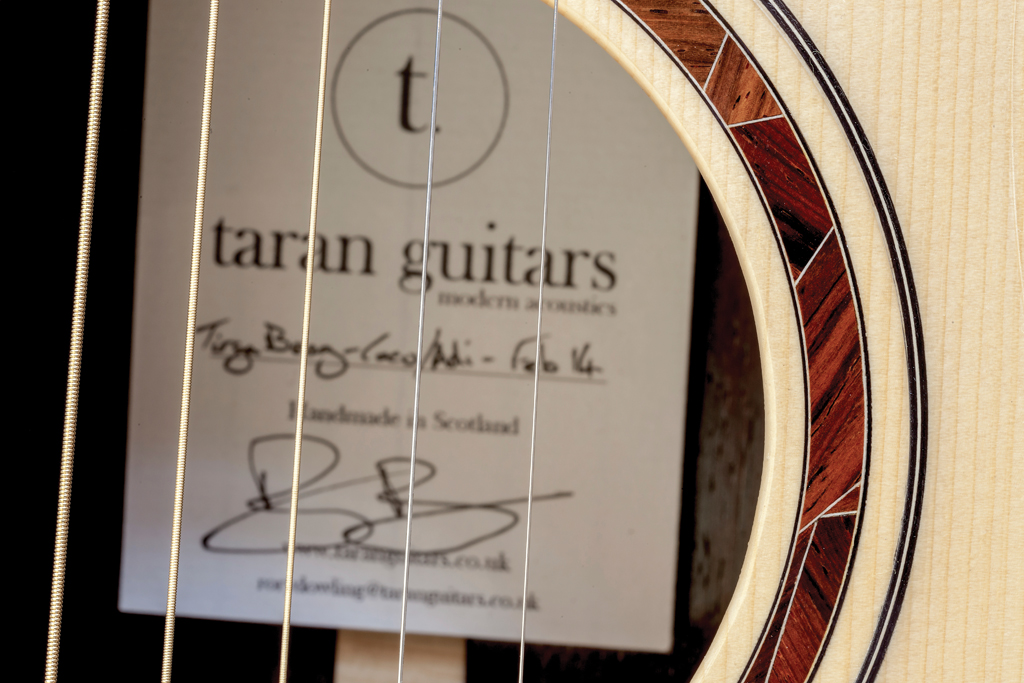 “When you laminate two things together you get a really strong bond, but when you introduce a core, by way of a Nomex honeycomb composite, the rigidity is hugely increased,” says Dowling.

“The thing is, it’s light. I am calling it triple sides. The idea is you create a ridiculously stiff rim for the instrument so you get all the benefits of a double side, which means you can make the soundboard thinner in areas because it’s not having to do so much work because the sides are taking the tension, but you’re not changing the mass. The rigidity has been increased massively, so therefore I can make the top more responsive. It’s basically double sides on heat.”

Meilein A parlour-sized guitar, ideal for fingerstyle with a balanced crisp, clear tone.

Taran Mhor An OM-sized guitar suited for both fingerstyle and plectrum playing, its sound is described as “energetic and responsive with a warm, deep and clear tone”.

Tirga Mhor The jumbo of the range with rhythm in its soul. It has a well-balanced, powerful and clear tone.

Tirga Beag Larger than the OM size in width but not in length and depth, the Tirga Beag is Dowling’s most popular instrument to date.

Ulladale The largest guitar in the family, the Ulladale has been especially designed for open tunings with a warm dynamic tone.