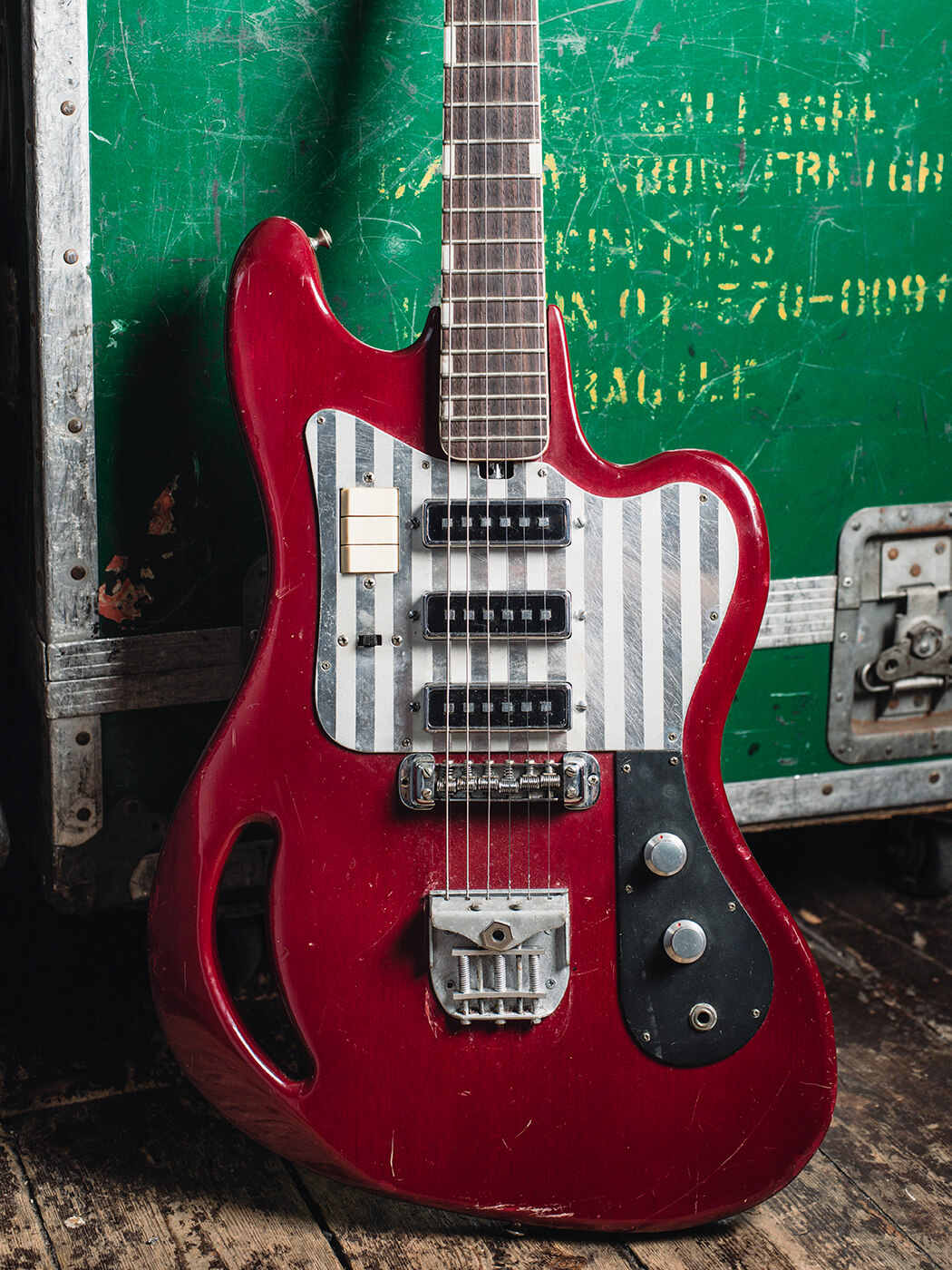 Our final leftfield electric comes from Teisco. The Japanese budget brand might have been recently reborn as a maker of oddball effects, but during the mid 1960s, it was bringing its eccentric design approach to guitars such as this offset.

“This is such a mad thing! It’s so cool – it’s got a handle, nobody needs a handle!” Daniel Gallagher – Rory’s nephew – laughs. “I feel like this is another one of those guitars where he saw it and thought, ‘That’s mad, nobody else is playing one, I’ll take it!’ And it probably only cost him a couple of hundred dollars, if that!

“When he was on the road, especially in America, he would just go into pawn shops and buy loads of Kays, Harmonys, Tokais and Teiscos. He wouldn’t be interested in buying that year’s new Strat or whatever.

“If he was here now, he’d be ignoring all that,” he continues, gesturing to the wall of old Gibsons and Fenders in New King’s Road Vintage Guitar Emporium. “He’d be looking at the Nationals, the Teiscos, the Silvertones, asking ‘What’s that? What does it sound like? Can I break the tremolo arm off it?’”

So much of Rory’s collection is taken up with these unusual guitars that weren’t exactly trendy at the time, and a lot of it comes back to his deep love of blues and blues history.

“Rory loved collecting blues memorabilia – vinyl, posters, photographs – and he was fascinated by what the old blues guys would play,” Daniel explains. “And they would play cheaper guitars, because that’s what they could afford. And so he would say: ‘Well I’ve got to get that, because that makes a great blues sound,’ rather than a luxury Les Paul or whatever.

“I remember hearing the story of how he was on the Blind Faith tour in New York, and he wanted a particular guitar, an old Kay I think, because he’d seen Lonnie Johnson playing one on an album cover. And he asked Clapton if he knew anywhere in New York where he could one of these guitars, and Clapton tells him to speak to this guy, John Hammond Jr, the blues player.

“So he met up with him, and John tells this lovely story about how they met for the first time and then went guitar shopping in New York in 1969. And they find the guitar in the attic of this guitar shop on like 32nd Street or something, and then John says to Rory: ‘Look man, they’ll try to pull something here because you’re foreign… I’ll take the guitar over – how much do you want to pay for it?’ And Rory says: ‘I don’t know, $50?’ ‘Right, we’ll get it for $50’.

“And so Rory walks over and says: ‘Watch this…’ and he does the big Irish brogue – ‘Oh, I’ve come over from Ireland and I’ve been trying all day to find this guitar of my hero…’ giving it all that, and in the end the owner’s like, ‘Alright, $50’.

“John was like, ‘I still don’t know why he wanted it, it was a piece of shit!’ And think this was the late 60s in New York, you were tripping over all these golden-era Strats and Les Pauls and he was like, ‘Nope, I want a weird guitar with barely any wood for a bridge!’”