From the Red Special to the Crow, we rundown some of the most high-profile reclaimed-wood guitars currently being used by big-name players.

Guitars are typically made of wood, but not all wood is created equal. Some is ethically sourced from tree farms, some illegally sourced through deforestation, and some has already amassed a lifetime of memories and mojo by the time it hits the luthier’s workbench. Reclaimed wood is not always pristine, and often presents unique challenges during the building process. If well handled, however, the results can be matchless and offer players an invaluable feedback loop in which their tool for creating art becomes the very inspiration for it.

Building guitars from reclaimed wood is not a new practice but it remains under-discussed with regard to tonewoods. Reclaimed wood is often well aged, and these old-growth pieces can already harbour the coveted qualities that vintage instruments do. However, reclaimed wood from old church rafters, for example, can not guarantee consistency to major manufacturers the way farmed wood can, which is why when big companies do release guitars made from reclaimed wood it’s usually in limited quantities.

Here, we examine some of the most high-profile reclaimed-wood guitars out there, and explore why they sound the way they do.

The Red Special is a home-made guitar in more ways than one. To build it, Brian May and his father salvaged wood from around their house. The largely chambered body, which many have claimed to be oak, is made from a reclaimed tabletop. While it’s true that there are two thin layers of oak on its top and bottom, both topped with a mahogany veneer, the centre of the body is actually formed of a much cheaper, unidentified softwood, such was the construction of the tabletop.

For the neck, May used wood from his mantelpiece. There were flaws in this wood – in this case wormholes that the Queen guitarist filled with matchsticks and glue. The fretboard is oak, which remains an unusual option, while the neck’s inlays were carved from buttons and the binding is said to be made from plastic shelf edging. The Red Special’s custom neck features 24 frets, an uncommon number at the time of its creation during the 1960s. The original guitar also featured a zero-fret that was replaced in 2005. The other frets, however, are still original. Even today the Red Special remains a triumph of DIY ingenuity.

Paul Reed Smith’s first maple-capped guitar is a legendary instrument, following its tenure with Howard Leese during his years with Bad Company and Heart. The Golden Eagle became something of a template for PRS in the decades that followed.

“It’s got a mahogany body with a maple top,” Leese told Vintage Guitar. “The building of this instrument was cited as one of the defining moments in guitar history. This is the first PRS with a maple top: it’s completely handmade. The wood came from a 300-year-old maple dresser that Paul got from his bass player’s mom. If you look closely at the top, you’ll see a little dowel, opposite the knobs, where the drawer pull used to go.”

Leese used the Golden Eagle for every show he played and every record he made with Heart since he obtained it. Smith credits the build for bringing the use of curly maple back to the industry, and claims it’s the most expensive PRS guitar in existence. Leese reckons it’s valued at more than $500,000. Not bad for an old dresser.

In 2020, renowned Canadian luthier Rueben Forsland of Joi Guitars partnered with the Hendrix family to create a line of custom-built acoustics made of wood salvaged from Jimi Hendrix’s childhood home in Seattle. The necks contain strips of fir floorboards from Jimi’s bedroom and the living room, where the family’s record player was kept. Paint chips from the floor were inlayed into the rosette, while nails from the home were repurposed as fret markers. Even the side markers were made from the home’s old copper wiring.

The guitars not only look and sound amazing, they’re also deeply inspiring historical artefacts. The floorboards, which had once resonated with the sounds of Jimi’s voice, now sing once more. Several of the guitars were made from the salvaged wood, and no two are the same. The first of the limited run is owned by Slash, and features just a single piece of the home hidden beneath its fingerboard.

Like most bands, Metallica began as little more than a few dudes jamming in a garage. The act’s core members couldn’t have imagined back then that Metallica would one day become a massive musical conglomerate with its own record label, vast archives, and many, many arms. But despite the enormity of the band’s stature today, they remain rooted in that early camaraderie.

Case in point: using wood salvaged from the very garage that the band began in, famed luthier and longtime collaborator Ken Lawrence built a custom Explorer-style guitar for frontman James Hetfield. Despite the damaged wood presenting challenges, Lawrence was able to craft an instrument that sounded fantastic and played comfortably while also retaining the wood’s rustic appeal – even down to the unrefined rusty nails, which lend the instrument a sense of danger.

The ‘Garage Days’ guitar’s decorative custom fretboard was completed by Petar Milivojević and is rich in symbolism. The fantastical inlay features Hetfield looming large and Hammett as ‘the Reaper’, in reference to his stage nickname. Ulrich is depicted holding a lighting staff, because he brings the thunder, while Burton is represented by the Orion constellation in the sky. Four figures can be seen climbing the stairs towards a temple, which represents the “portal to creativity” that was that humble garage.

The California company’s 2017 Old Globe series is a rare instance of a major manufacturer creating a limited-run of guitars from reclaimed wood. For these instruments, Fender salvaged wood from the Old Globe Building, an old grain silo on the shores of Lake Superior. The silo’s construction was unique in that it was made of old-growth white pine that had been rough-sawn into dimensional lumber and then stacked flat. It laid that way for more than 100 years until the silo was dismantled and the wood sold off for various projects. Thanks to the silo’s construction and history, the pine retained a rustic feel, with some lumber still proudly showing off their nail holes. 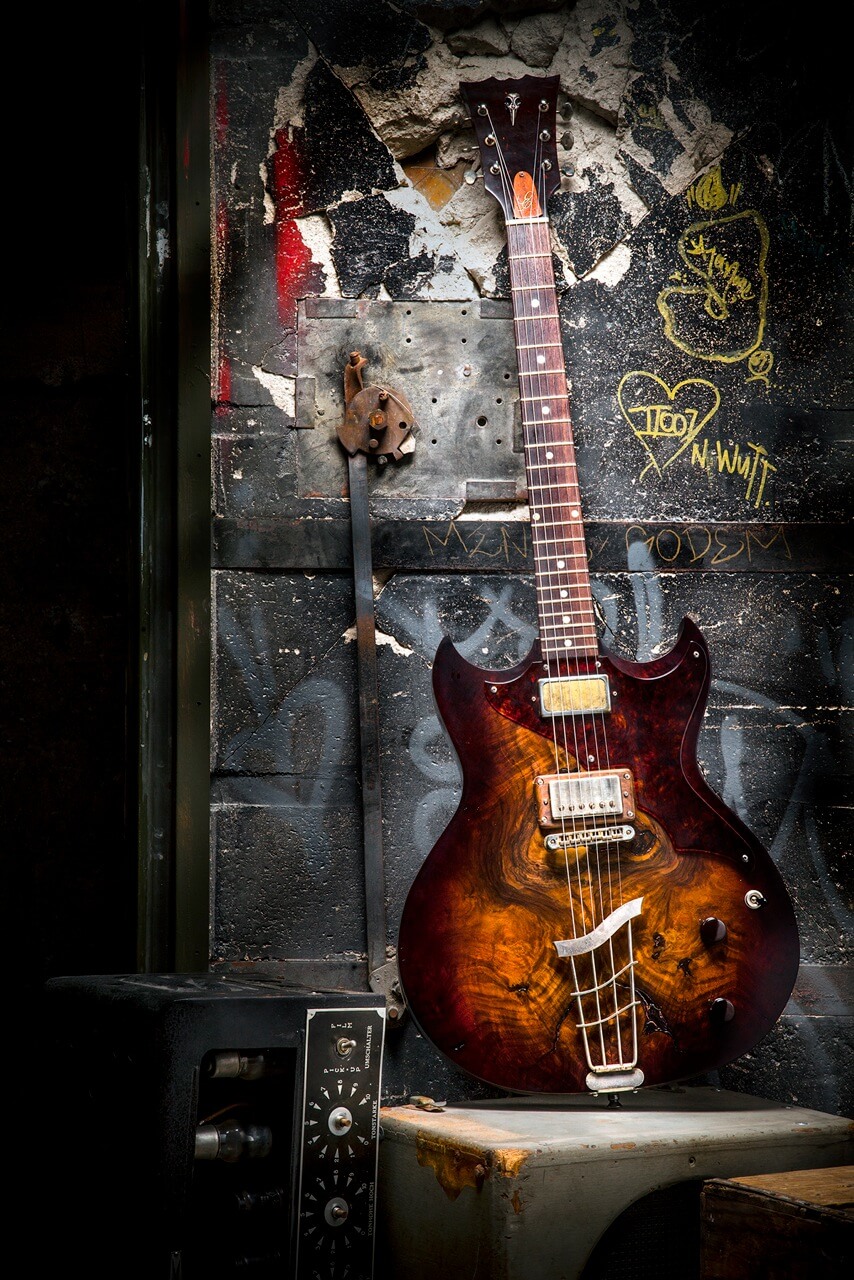 With a distinctive sound and style that speaks for itself, Queens of the Stone Age frontman Josh Homme is no stranger to strange gear. In 2013, Homme took delivery of a custom handmade guitar built by Gabriel Currie of Echopark. For his unusual builds, the luthier uses reclaimed wood sourced from his work on the historic restoration of old buildings in the Los Angeles area.

The neck of Homme’s custom Crow guitar was carved from a 200-year-old piece of Honduran mahogany that came from the Los Angeles Public Library. Its body is made from the same wood, only chambered and topped with gorgeous burl walnut that’s about 300 years old and has the knots to prove it. The guitar quickly found its way into Homme’s studio rotation and has contributed significantly to QOTSA’s sonic qualities.

Homme owns multiple Echopark guitars, and Currie is currently building him another, based on the Crow.