Songwriting 101: How the pros compose by improvising

Here’s why Yngwie Malmsteen, George Lynch and other guitar heroes believe jamming is the best way to write a song. 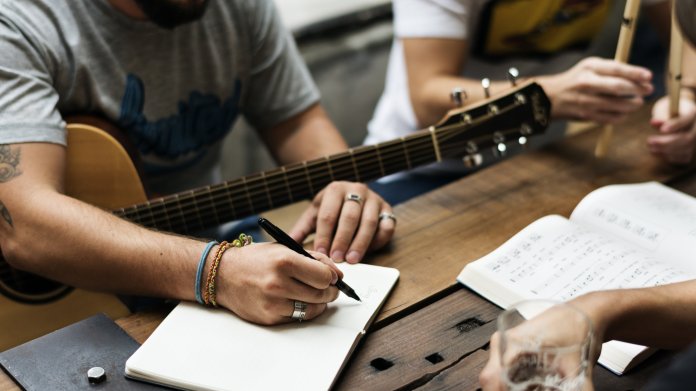 Do you ever feel like a plastic bag, drifting through the wind, wanting to start again? Trying to pen a catchy tune like Katy Perry’s may leave you feeling that way, but it’s all part of the songwriting process. And it isn’t exclusively a beginners’ problem—even professional musicians rely upon trial and error, improvisation, and endless jam sessions to compose their songs. Here are four of them.

Hang out with your instrument

The next time you’re binging on Netflix, have a guitar with you. Plucking and strumming it absent-mindedly may yield a surprise tune that you can revisit later on. It sounds counter-productive, but that’s what Yngwie Malmsteen does.

“I have a little Marshall amp in my living room, and it’s always connected with a guitar,” he told Guitar.com. “I just sit on my couch and play around while watching TV. If I come up with a really cool melody or chord progression or riff, it escalates from there. I’ll go upstairs into my studio and record it. If I had to, I could write a song right now, but I wouldn’t feel good about it. I like it to happen by accident.”

The guitarist believes that improvisation is the genesis of composition. And in order to arrive at something worthwhile, you have to jam. “I don’t think there’s a formula. It’s creation. As far as creation goes, you have to sort of let it take you with it, and just go with it. If there’s a little mistake, that’s beautiful. If it doesn’t happen, don’t try to force it.”

The best thing about having multi-instrumentalists in one band is that everyone can play one another’s part. Having team members, who are adept at other techniques, each decide on an ingredient to toss into the broth can result in a better soup than having one chef dictate the recipe.

James Shelley, the guitarist of American Authors, described his band’s songwriting method: “Everybody writes. Sometimes, Matt [Sanchez]—our drummer—will come to the table with a guitar part. And I’m happy to play his guitar part. Sometimes I’ll come to the table with a drum part. Or sometimes Matt or I will come with a melody or lyrics and say, ‘Here’s my song.’ And sometimes Zac will have drum and guitar parts. And we’ll play each other’s stuff.”

Understanding how different instruments interact will make you a more versatile musician, too. Eventually, you could be writing multiple instrumental tracks for a song, as opposed to creating a seven-minute-long guitar odyssey to show off.

Inspiration can strike at any time. Unfortunately, the human mind wasn’t designed to recall lengthy musical passages, meaning you could lose your Grammy-winning idea as easily as you found it. The secret is to record everything, even if that means whipping out your iPhone and humming a melody that came to you while you’re on the subway home. If you keep at it, you’ll have a bag of tricks ready and waiting on your phone.

George Lynch is one guitarist who finds his cellphone one of the most useful songwriting devices. “I do have a home studio, but initial ideas, half the time, are just captured on an iPhone wherever I’m at,” the former Dokken guitarist explained. “And the next time I’m sitting in my studio, I don’t fire up the studio. I’ll just play something on an acoustic guitar into an iPhone just to capture it.”

Lynch then catalogs all these partial ideas into his computer, organized into folders. And when it’s crunch time in the studio, he only has to reach into his computer if inspiration runs dry.

Most of the time, the first bat won’t be a home run. Likewise, the first draft of a song may take dozens of iterations before it’s even half decent. You’re better off finishing the blueprint, warts and all, before finessing the details. Scott Henderson calls this method “writing in real time.”

Rather than spending a lot of time on these decisions, the jazz fusion guitarist commits an outline of a song to tape, listens to it, and then make the decisions. “I’ve learned through experience that working on music in real time is more beneficial and productive.”

Unlike a painting, which is viewed at one moment, music is appreciated over time, he continued. “So when you write over that timespan in the same tempo, you get better results. Sometimes, I’m able to just jam over a drum track. I first decide: What kind of time is this going to be? Is a funk tune? A rock tune? Even if I jam over it for six hours and then come back [to it] a few days later, there are always a few really cool ideas that I can use as a starting point for melodies and stuff like that. And sometimes, I just luck out.”