How do you keep the passion for writing new tunes burning? Five pro musicians drop tips and tricks on seeking inspiration. 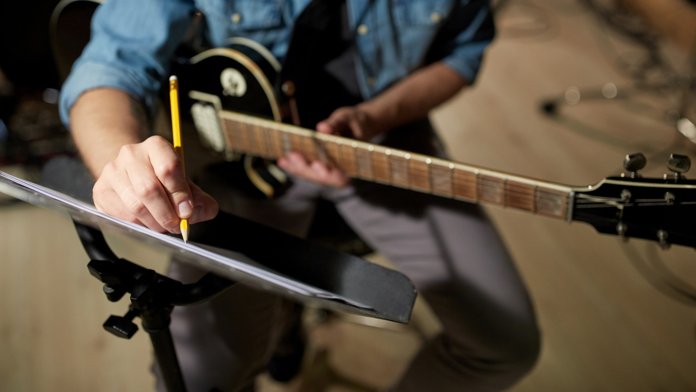 If you find yourself hammering out the same old tune ad nauseam, it doesn’t mean you have the musical talent of an eggplant. Songwriter’s block can be as easily solved as listening to fresh sounds, experimenting with gear or even shifting the furniture around your practice room, say these guitarists.

Creativity is a process

Not something you pluck from the ether. And, like any other process, the more you work at writing songs, the better you’ll be, James JY Young told Guitar.com.

The Styx guitarist believes songwriting and playing the guitar are two separate things. “[Songwriting] is a different craft, and it really requires profound diligence, more than I generally have. It’s ten percent inspiration and 90 percent perspiration. You have to really devote yourself to it.”

But for the other ten percent, expect inspiration to strike at any time. George Lynch, who admitted to battling writer’s block when he was in Dokken, exorcised that ghost by immediately recording any half-idea into an iPhone whenever it pops up. “It’s strange how that works,” he said. “I don’t even question it. I know for a lot of creative people I talk to, inspiration can come in the strangest places. A lot of people say it hits in the shower. Or driving. Or just waking up in the morning with ideas rolling around in your head.”

Experiment with your equipment

Tinker with your gear. That’s Glenn Tipton’s advice on staying inspired: “[I] just mess around on the guitar, listen to a lot of stuff, and get some effects down on the guitar to give me inspiration. Maybe some unusual effects or something. They don’t always end up being used, but they create an atmosphere that breeds ideas.”

And because of the experimental nature of Tipton’s process, he records everything. “I put everything down,” the Judas Priest guitarist said. “I always put it down somewhere, because, yeah, you can remember the notes, but you can’t remember how they were played. I’ve got a bad memory, so there are a lot of good riffs gone into space that I never jotted down.”

Facing the same window every time you pick up the guitar to play can be a drag—and changing your environment, even if only slightly, can lift you out of a rut. Joe Satriani has made this a habit every time he’s finished recording an album.

“I just look around my room and say, ‘I think I’ll put the drums over there and my amp over there instead,’” he described. “I rearrange the furniture, get a new book to write ideas in, restring the guitar with a [different] gauge, put new pedals on the ground—and I wind up getting into something different.”

Sometimes, Satch would put on old records outside of the genre he wants to compose in. When he was working on “classical-sounding music,” the G3 guitarist put on old blues records, or recent albums that pay homage to that timeworn music. “I may work on that for five years and it may never come out,” he added. “It may just be a ‘personal growth’ project. Which sounds like a medical condition, but actually, it’s [good practice].”

Yes, it’s trite to say that traveling expands your horizons. But there’s a truth to it that applies to songwriting, too—or at least Mimi Fox thinks so. The jazz guitarist deliberately and consciously channels her wanderlust into her music, and there are many songs of hers that wouldn’t exist had she not left her comfort zone.

“I write songs for the people I love, the places I’ve been or the experiences I’ve had,” she said. “I’ve got a piece called ‘Sosua,’ and I wrote it about this little town in the Dominican Republic that I visited when I was on tour. Just being in the village, hanging out with musicians, eating the food, taking in the smells—all that stuff affects you.”

Even losing her way in a foreign subway station can be fuel for a song. When Fox was touring Tokyo, she couldn’t navigate Shinjuku station (“It makes Grand Central in New York City look like Boise, Idaho,” she laughed), and she leveraged that experience to pen a tune named after the station. “To top it off, with half the signs being in Japanese, it’s real fun to try to get home at two in the morning from an after-hours jazz club.”