The man behind BA Ferguson Guitars, Ramon ‘Boot’ Arreola Jr, has developed a penchant for guitar building that evokes stories of his dual-heritage upbringing and his love of community.

“In the early mid 90s I got into Nirvana, Pearl Jam, and Guns n’ Roses. I was hooked on all the guitar stuff I heard, especially when it came to the noisy nature of Kurt Cobain‘s guitar work. Naturally I bugged my mom for a guitar and eventually she got some money together to get me my first guitar. It wasn’t great, but it was what they could afford, and I loved it. I’d stick pieces of bread wire ties on each string to try and simulate distortion. It drove my mother nuts. A year later I learned some actual chords from some friends at a church group, that’s when all the real ‘trouble’ began!”

“My frustrated mother, who was under the stress of switching jobs one day, broke that same guitar into a million pieces when she found me still practicing for hours after giving me a list of chores to have done. Though I vowed ‘revenge’ by way of trying to glue every piece together, several friends wound up donating unused guitars to me. Before I received those, I borrowed a guitar from a friend that I accidentally broke. I ended up fixing that one with the help of my grandfather, a seasoned wood worker. Eventually, when my other guitars were in need of repairs, I wasn’t afraid to fix them. After graduating high school, I landed an apprenticeship with Barry Martin who owns a shop in El Paso called Frets & Necks. I met him years prior and begged to work for free for him, he politely refused and told me to focus on getting something that paid better! He became a mentor and father figure to me which I believe eventually led to the apprenticeship. I’ve been messing with stringed instruments ever since.” 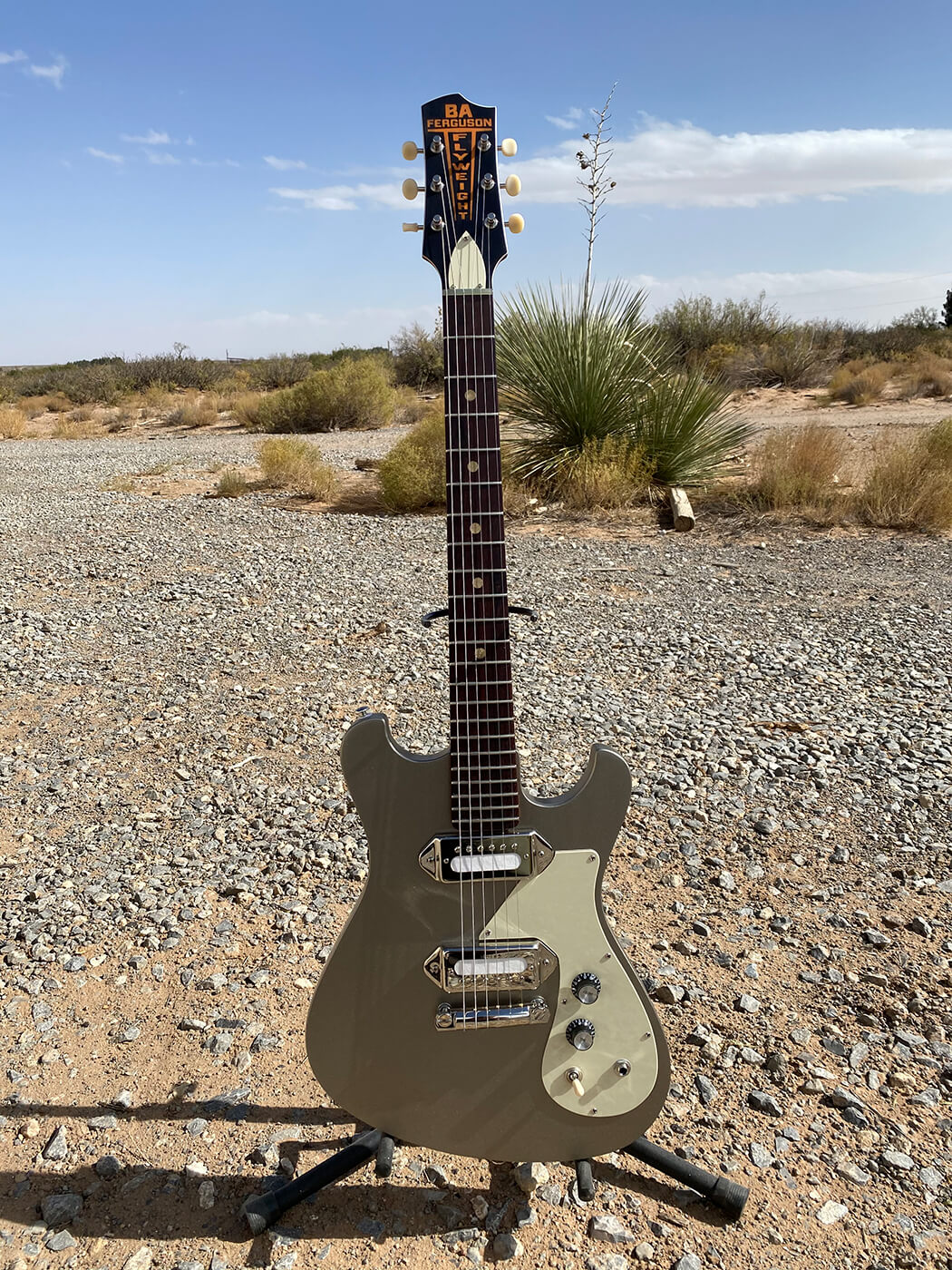 “While fixing guitars I’d always circle around to construction methods and how I wanted to do things differently. During those conversations I came up with the idea of using the name Ferguson. I’d always struggled with people pronouncing my name, and being a first generation Mexican American, sadly I always felt a bit of shame about my name, thinking no one would take ‘Arreola Guitars’ seriously. I’d use a pseudonym when I did photography or when I recorded bands, often ‘Boot Ferguson’ or ‘J Ferguson’. Eventually, I came to terms with my name and added the BA for ‘Boot Arreola.’ After moving to South Carolina in 2004, I began trying to acquire guitar repair work to get experience. That eventually lead to me opening up for business around 2006, by 2008 I started building guitars. Each time I made a guitar I knew the next one could be better if I just kept trying and learning. It wasn’t until 2011 that I felt confident enough to make a batch of guitars for Summer NAMM.”

“The investments came from folks in non-monetary ways. When I left my apprenticeship, Barry gave me tools he’d collected over 30 years to take with me. When we lived in Florence, SC, my father-in-law let me build out his garage space as a shop until we moved. There, I met Steve Avant who allowed me to borrow some vacant space he owned downtown to get on my feet. There were countless acts of kindness from him and others along the way that helped me stay encouraged and in business. We did a successful Kickstarter at one point to introduce the Standard offering of guitars. The hardest thing I’ve probably had to do was to leave all of that behind to move back to El Paso, TX. Today I share a shop space with another instrument maker, and I build about 45 guitars a year.” 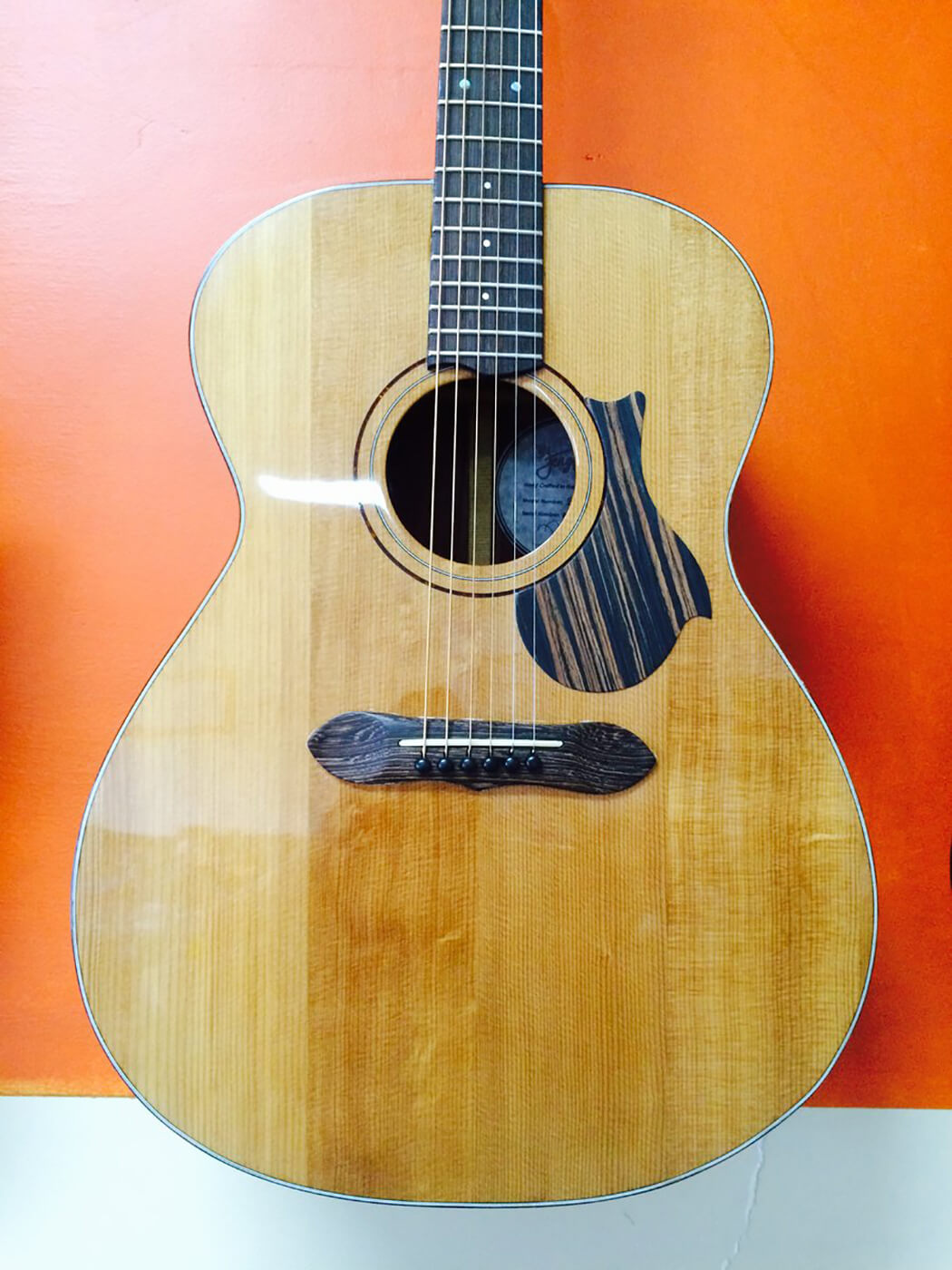 “Probably in 2011 when I failed miserably at Summer NAMM. We showed up to the show with about 12 guitars, they were all very different. Mostly my interpretations of a Tele or Strat along with the first two Shirley prototypes that wound up being my flagship guitar. We left that show in debt and downtrodden. It took that experience for me to realise that the style was just all over the place. I got rid of every model except the Shirley, Walker and two acoustic models. It seemed to work because people started asking for the Shirley by name. To this day, it’s my favourite design to build and is easily associated with BA Ferguson.”

How did you come up with the Shirley?“When I did my apprenticeship, I’d sketch in a notebook and there was one I’d draw out over and over again that was my dream guitar. It always had elements of the Ibanez Talman, Tele and Iceman guitars, but I could never really get that drawing right. Years later I had draw it out to finally decide what my dream guitar looked like, then I shelved it and forgot about it. It wasn’t until a friend placed a custom order and essentially described my dream guitar. I grabbed the drawing and he said, ‘This is it!’”

“The people I’ve met doing this and how many customers have become friends. The Walker is named after my friend, Ben Walker, who owns the first of its kind. The Standard line exists because of Philippe Herndon of Caroline Guitar Co who mentored me through a successful Kickstarter campaign. Nick Greer and I struck up a friendship that has led to tons of calls about life and guitar engineering. That lead to the development of the Flyweight which has been wildly successful. I’m proud of the artists who have sought me out to make them guitars, like Fred Zeller who does sound production for the Jimmy Fallon Show. The fact that I get to focus on building and creating guitars in my old stomping ground brings a huge sense of encouragement.” 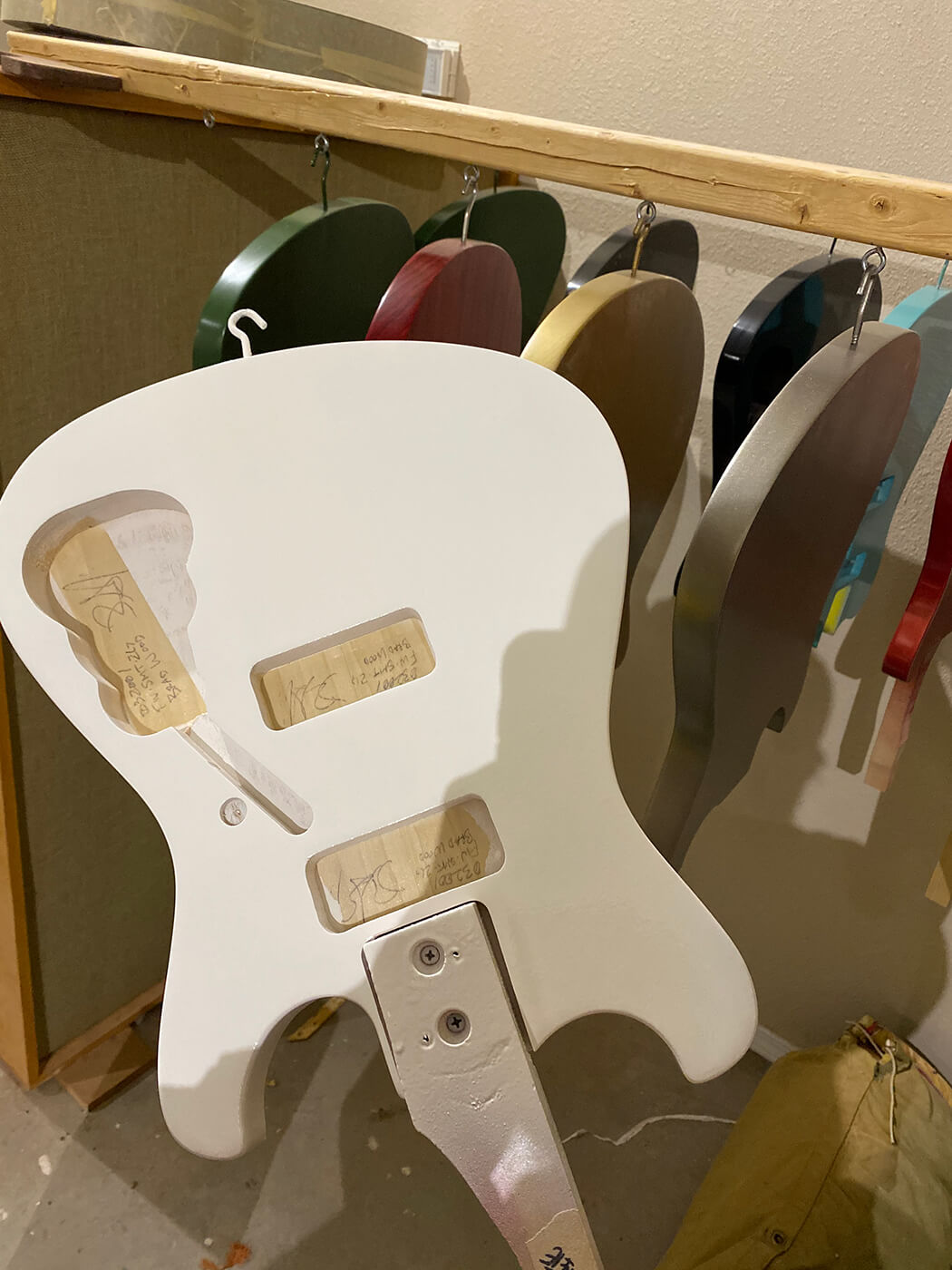 What’s next for BA Ferguson guitars?

“While I mostly make electric guitars, my first loves were mandolins and acoustics. This year will see a new standard offering of acoustics and mandolins. Up until recently, those instruments were only available via custom order which generally starts at about the $3,000 range. There’s also a new electric guitar fuelled and inspired by conversations with Nick Greer called The Ranger.”

Find out more about BA Ferguson at baferguson.com.