From a chance encounter with a Grammy-nominated producer to touring with Lower Than Atlantis, it’s been a whirlwind beginning for The Faim. Sam Roberts talks to guitarist Michael Bono… 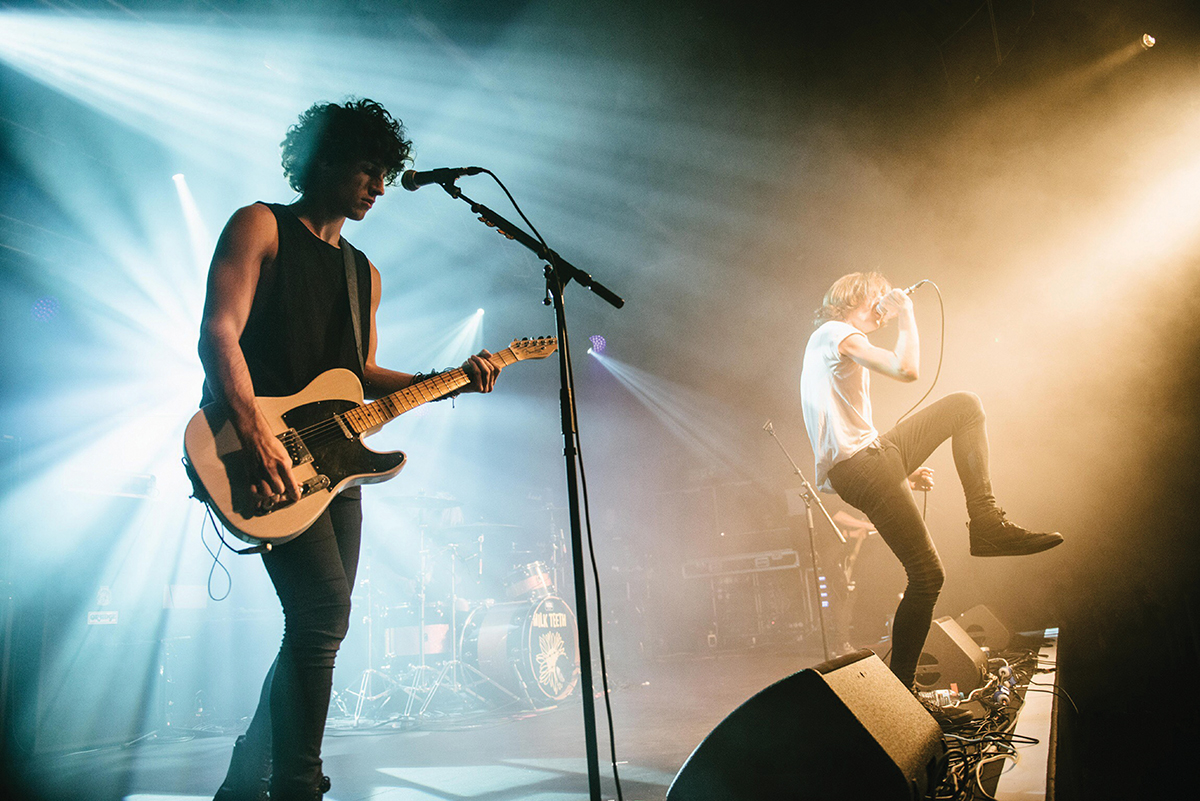 Australia’s next major musical idols The Faim appeared on our radar fairly recently following the release of their debut single Saints Of The Sinners, co-written with Fallout Boy’s Pete Wentz. But it all started with a knock-off S-type…

“My first guitar was a sunburst De Ville. I still have it back at home!” Michael recalls. “I first picked up a guitar when I was around six years old. My Dad had an electric but it was always just a hobby for him. I started playing around with it, having no idea what I was doing, but fell in love. The following year my mum enrolled me into guitar lessons and I basically haven’t stopped since.”

Michael’s love for music is all-consuming, and evident in the wide range of influences he cites on the band’s upcoming releases. “Growing up with such a broad music taste between the four of us, the diversity really shows in our songs,” the 21-year-old declares. “I loved bands like Green Day, Metallica and Fall Out Boy, compared to the others who grew up listening to bands ranging from U2 and Coldplay to Panic! At The Disco, Frank Sinatra to My Chemical Romance.”

His early influences are apparent on the aforementioned Saints Of The Sinners, produced by the Grammy Award-nominated producer John Feldmann, who invited the band to his LA studio following a demo he received. “It was such a surreal experience to have worked with John.” Michael reflects on working with the multi-platinum selling Feldmann. “I’ve looked up to his works since a very young age and the bands he’s worked with [Blink-182, Biffy Clyro, et al] were such heavy influences on our writing. He really pushed our writing capabilities and has helped us improve as songwriters. It really was a dream come true.”

To have your first release produced by someone of Feldmann’s stature is no mean feat, but the Perth natives’ plethora of newly acquired musical companions doesn’t stop there. They were also given the opportunity to work with Blink-182’s Mark Hoppus and Pete Wentz, the latter co-writing Saints Of….

“We had the chance to hang out with Pete Wentz when writing Saints Of The Sinners. He really helped us open our eyes to a new songwriting perspective. Mark was introduced to us in the studio, and we wrote a song with him in the same session. He gave us a really good insight to his writing style and we learnt a lot from it. He’s a super nice guy!”

The Faim’s rise is not without graft, mind you. Prior to working with multi-million selling artists and producers their songwriting technique required some slight modification.

“Breaking away from our original sound was possibly one of the hardest things we’ve done. It took months of trial and error, writing 30 ‘half-songs’ (intro, verse, chorus), and experimenting with new sounds and styles to reach something that was unique to us.” 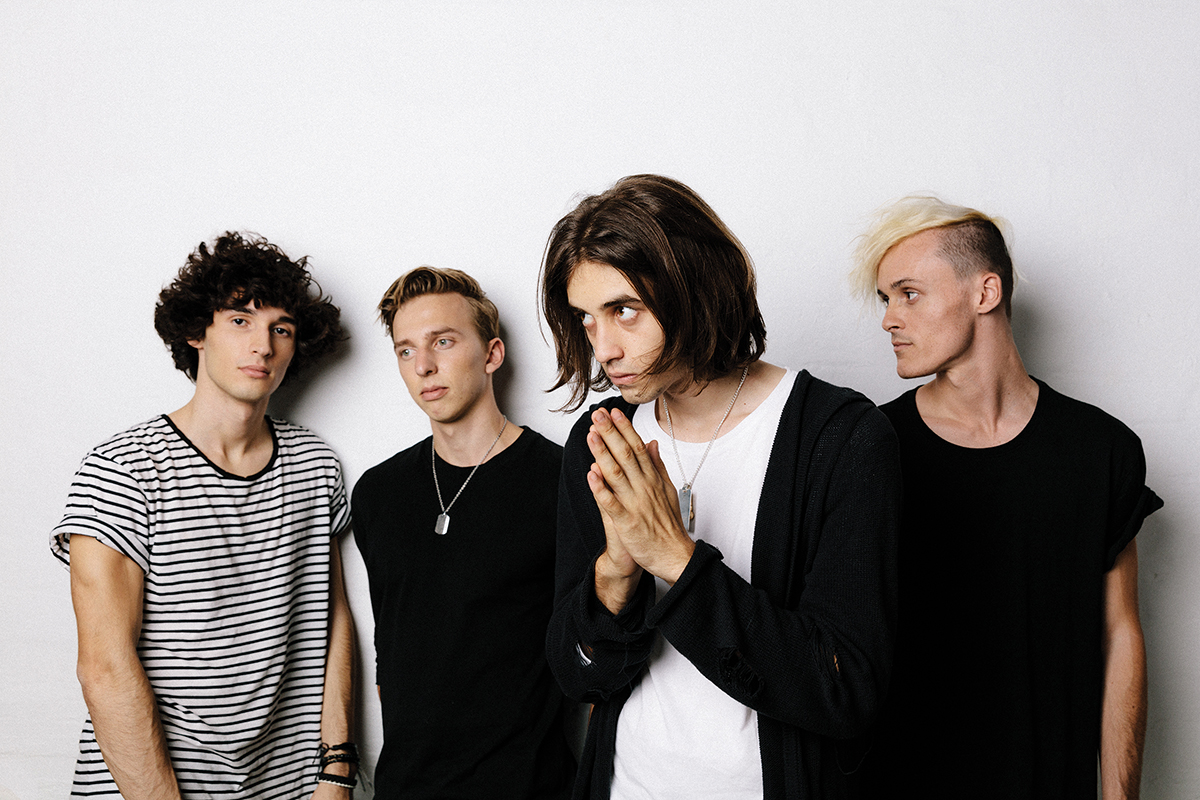 The resulting stylistic change brought with it a reinvention of image and branding, too. “Before the name change, our band had a very different style. The idea of changing our name came about as we started re-inventing ourselves and our sound when working with John Feldmann,” he reflects.

“Our former name, ‘Small Town Heroes’, felt very ‘pop-punk’, and we were looking for something that was more suited to our new vision, of having no boundaries when it comes to genre. ‘The Faim’, meaning hunger in French, captured our urge to succeed in everything that we do. It’s also a name with which we can grow as a band, through our sound, image and performance.” Their new approach was evidently not in vain. Signed to BMG, they are currently on tour with Lower Than Atlantis, only to be followed by an even more exhilarating jaunt around their homeland and New Zealand with post-hardcore veterans Sleeping With Sirens.

As is almost customary with world-touring modern rock acts, Bono uses modelling as part of his touring rig, with a Fractal Axe-Fx going into a Matrix power amp.

“I find you can get a guitar tone exactly how you want it to sound and make it sit nicely with the rest of the band,” he explains. “It also makes it a lot easier when touring as we DI everything to front of house which means travelling light.”

His guitar choice on the other hand is a time-honoured classic, if not a little more rudimentary. “I use a Fender Deluxe Telecaster, it’s certainly my guitar of choice at the moment and feels very comfortable to play. I love the tones it produces and the clarity.”
Again on the subject of modern technology, the band owe a lot of their fame to YouTube.

“When we were first starting out we never considered uploading vlogs to YouTube.” Michael admits. “But we wanted to experiment with as we wanted to have a strong social media presence. We found that this was the only way to reach a global audience without spending a load of money on touring.”

With a debut album in the pipeline, multi-award-winning producers and musicians in full support and appearances at major UK festivals such as Download and Reading and Leeds already confirmed, The Faim’s global audience seems closer than it’s ever been.

They do however, still want to maintain that connection with their gig-going devotees. “We’re so keen to play for everyone in the UK, there’s just so many music lovers here!”

The Faim’s singles Saints Of The Sinners and Midland Line are out now on BMG.