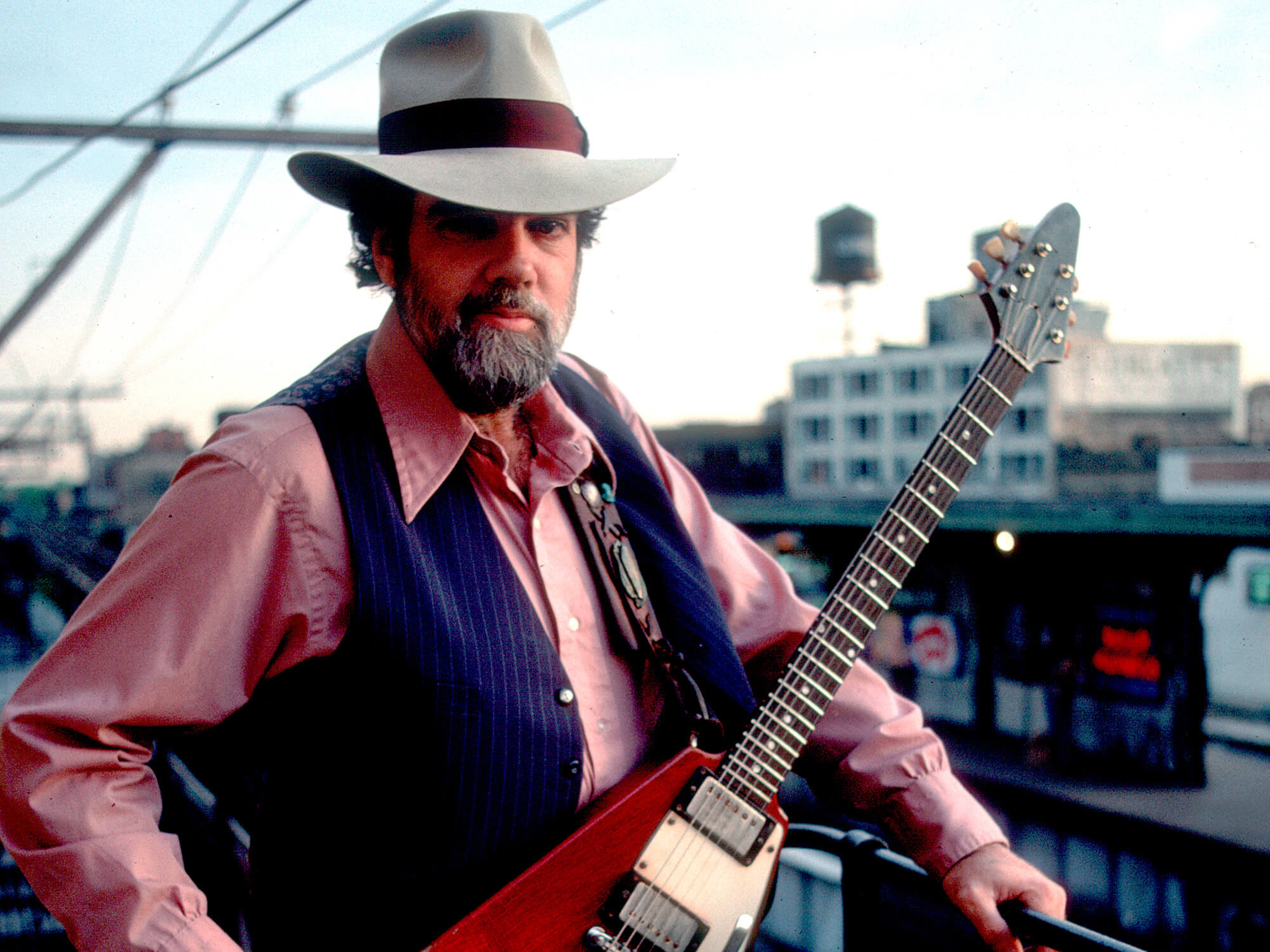 ‘Number 7’ is one of the most iconic Flying Vs ever, and without it and the exploits of its owner, the history of Gibson’s most polarising guitar might be very different.

When Gibson released the Flying V in 1958, it’s probably understating things to say that the revolutionary new design was not particularly well received. Only 98 guitars were sold, and production officially stopped in 1959, though a handful of leftover guitars continued to eke out into the world until 1963.

Nowadays, however, the Flying V is an iconic part of Gibson’s line-up, and a body shape that Gibson has been zealous about trying to stop others from using in recent years – so how did we get here? Well, a key figure in helping to take the Flying V from a commercial disaster to one of the most iconic guitar designs of all time is a man by the name of Lonnie Mack.

Lonnie McIntosh, as Mack was born, was a young musician who’d been kicked out of school and instead spent his days hanging out at a local music shop called Hughes Music in the town of Norwood, Ohio.
It was in Hughes’ that Lonnie first laid eyes on a futuristic new design in the pages of Gibson’s 1959 catalogue – and unlike most guitarists at that time, he was very taken with it. Legend has it that he liked the V because Mack, who had Native American heritage, liked the guitar’s resemblance to an arrowhead.

He bought a Flying V from that very same music shop right away. The shop owner put the order in to Gibson for the guitar and even ended up making a 600-mile round-trip from Norwood to the Gibson factory in Kalamazoo, Michigan to pick up the guitar. The serial number would indicate that Lonnie’s V was the seventh one off the assembly line.

Upon receiving it at last, Lonnie loved the shape and look of the guitar, and played it as a stock instrument for a while, (in fact you can see Lonnie posing with it on the front of his 1963 debut album The Wham of That Memphis Man) but there was something that nagged at him. He wanted a vibrato, and the guitar’s shape didn’t lend itself to any vibrato units on the market at that time (Flying Vs factory-fitted with a Vibrola vibrato wouldn’t arrive until the guitar’s revival in the late 60s).

The aftermarket vibrato market back then was pretty thin and there weren’t many options out there, but generally speaking most people of that era considered the ‘best’ vibrato of the era was the tailpiece designed by Paul Bigsby in 1951. Lonnie decided that his guitar had to have one of these.

Now, most people would probably look at the Bigsby, and the gaping void on a Flying V’s body where the back of the tailpiece would normally be mounted, and decided that the only thing to do was to get a different vibrato, or a different guitar – but the music shop owner, a gentleman called Glen Hughes (not that one) was not most people.

Hughes instead determined that he would take a piece of stainless steel, cut and bend it to fit across the span of the V, and mount it where the Bigsby’s rear screw would need to be attached – et voila, likely the first ever Bigsby-loaded Flying V was born.

Mack used the Flying V from the very earliest days of his musical career, and by the time of The Wham of That Memphis Man he was receiving critical acclaim for his fast-paced instrumental guitar solos, especially for the song, Wham!. In fact, it’s widely believed that the colloquial term for a vibrato, ‘whammy bar’ was inspired by Mack’s use of the vibrato arm on Wham!.

Mack put out several solo albums in the coming years, though his popularity was curbed by the British invasion, but his influence and impact would continue as a session player, providing bass on The Doors’ Alabama Song and guitar for the likes James Brown and Freddie King.

Mack helped sculpt a style of lead guitar that is still admired and emulated today, and for the entirety of his career, his “Number 7” Flying V, as it came to be known, was his constant companion. Beyond the Bigsby it also went through some changes in the decades he used it however. In the late 60s it got some new pickups, and at one point he also painted it red, but it ended up with somewhat of a pink hue when the paint dried.

‘Number 7’ lived a hard life on the road and in the studio as a workhorse. It fell out of the back of a van while Lonnie was driving from a gig. He’s also reported to have thrown it into a trash can after a particularly rough gig – fortunately a fan retrieved it and gave it back to him. This was especially fortunate from a financial perspective because even if Mack didn’t own the instrument, it would easily be worth six figures today. The guitar was played so much that it underwent at least one re-fret during its lifespan.

In 1993, Gibson released a limited run of signature Flying Vs complete with the Bigsby tailpiece. I believe they only made 185 of them. As for Lonnie Mack, he passed away on April 21, 2016, at the age of 74. His passing was somewhat overshadowed by the untimely passing of Prince, who died on the same day. The current whereabouts of the Number 7 Flying V is unknown, but it is presumed to belong to Mack’s family. He also had a small batch of Custom Shop replicas that he would occasionally use.

Lonnie Mack will forever be linked to his red Bigsby-equipped Flying V, and we all owe Mack and Number 7 a debt of gratitude for all they have given to the world of rock ‘n’ roll. He is among a core group of musicians who brought the Flying V into mainstream use.