The story of the Guild Surfliner: how one quirky offset embodies decades of Guild’s history

From its swooping cutaways to its rocker switching, the Surfliner turns to vintage Guild designs for inspiration, but still looks squarely to the future.

How do you celebrate almost 70 years of legacy with just one guitar? And, as an added bonus, how do you avoid making that guitar feel painfully old-school? With the Surfliner, that’s exactly what Guild set out to do – here’s how.

Guild was founded in 1952 by Alfred Dronge and George Mann and began making guitars a year later. Since then, it’s introduced a number of electric guitar shapes – six of which donated some of their DNA to create the Surfliner.

Guild drew on the silhouettes and specifications of the fully-hollow X-350, the semi-hollow Starfire, and the solidbody T-Bird, Jetstar, Polara and S-300, for a design that pays tribute to its most recognisable guitars, while still being something new. 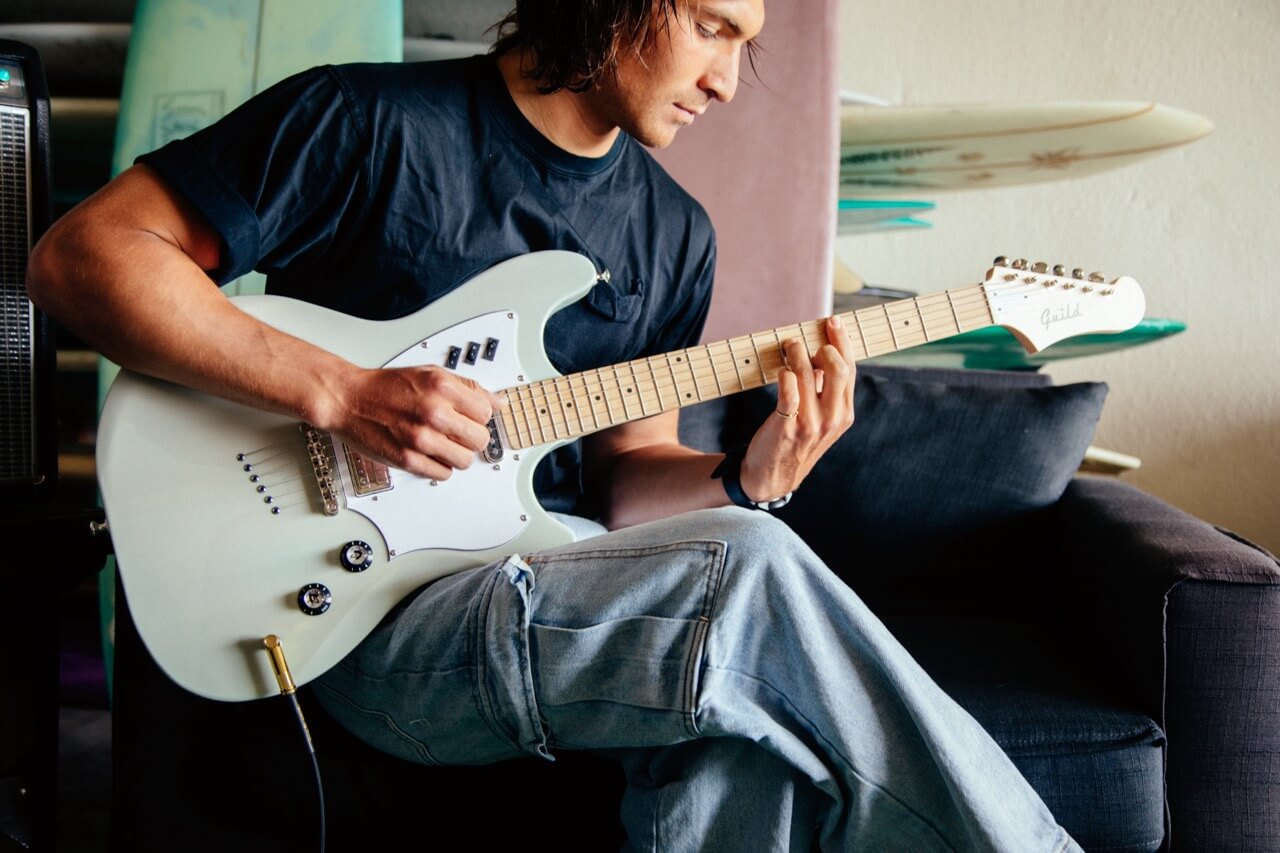 Guild’s solidbody guitars definitely have some rather eccentric silhouettes to them, with their swooping shapes with some of the most dramatic angles seen in the guitar world. This approach was essential to recreate in the Surfliner – all over the guitar, you’ll find evidence of this quirky approach.

The deep, angled carve on its lower bout, for instance, is taken from the S-300’s distinctive upper-body carved swoop. The upper horn and the top of the headstock, meanwhile, are taken from the Jetstar, as you might be able to spot with the distinctive smooth profile to the horn and the abrupt turn away from the line of tuning machines seen in the headstock. The slightly squared-off pickguard shape, meanwhile, is inspired by that of the Polara.

While the actual guitar designs the Surfliner draws on hail from the 50s, 60s and 70s, the 1980s aren’t left out either – the understated cursive logo upon the headstock has been resurrected from Guild guitars of the 80s, it’s flowing shape a great companion to the curvy headstock it finds itself on.

Across many Guild guitars, there’s a recurring motif of slanted straight lines, too, such as the X-350’s harp-shaped trapeze tailpiece, or the Polara and the S-300’s angled stop-bars. This motif finds its way into the Surfliner, but it doesn’t just repeat the use of the angled stop-bar or the harp trapeze – instead, it has a string–through design, with the line of ferrules tilted in an echo of the angled bridges of vintage Guild designs. 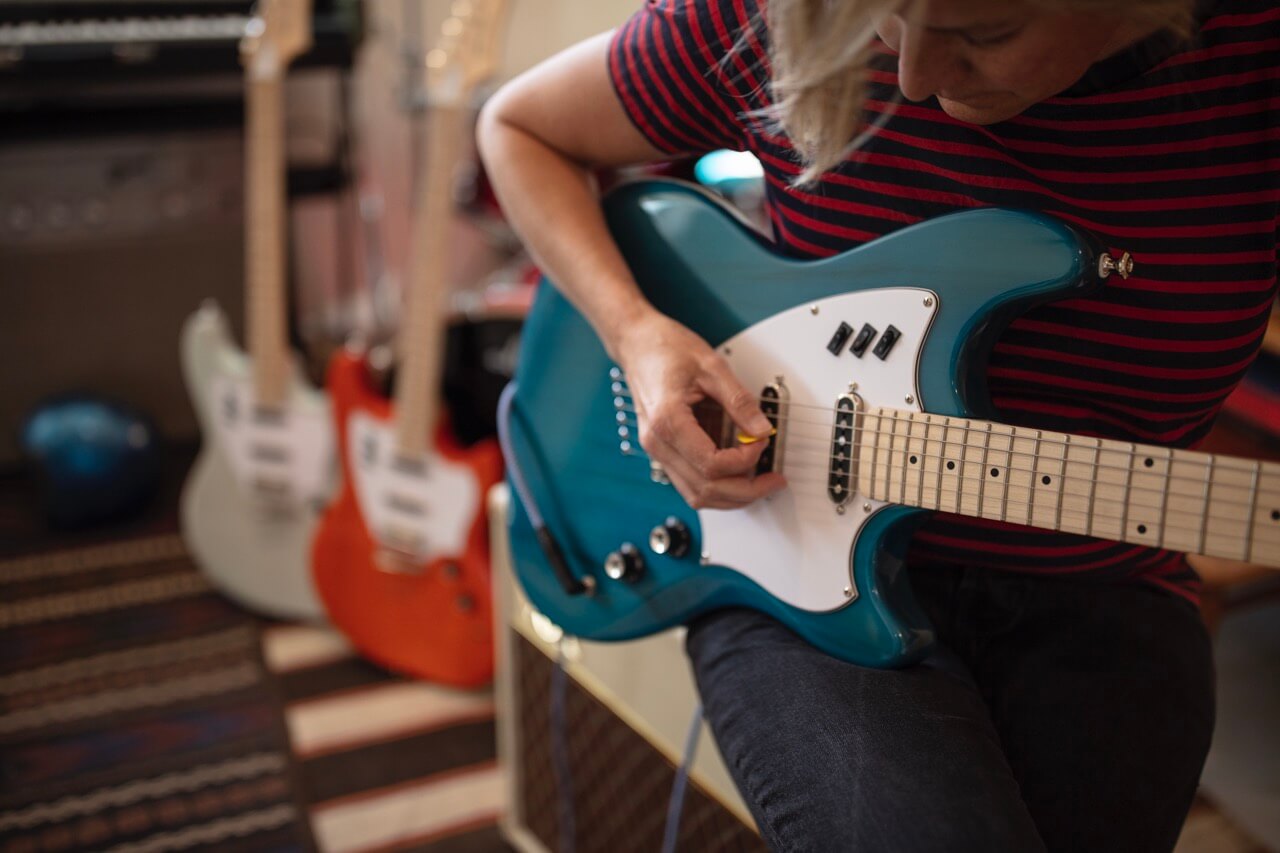 It’s not just the Surfliner’s lines that make it a throwback Guilds of yore – its triple-rocker switching system is inspired by the T-Bird’s pickup selector, and the LB-1 humbucker found in the bridge pays tribute to the humbuckers found in 1960s Guilds, in both sonics and aesthetics.

There’s a reason vintage-voiced humbuckers are so highly revered – their balanced output makes it easy to get a great range of tones. Clean tones are clear and defined, with plenty of sparkle as the pickup isn’t overpowering the signal with low-end. That’s not to say that it’s too thin to get overdriven tones – the LB-1 can still produce a warm, well-rounded drive sound, with plenty of sustain and punch. 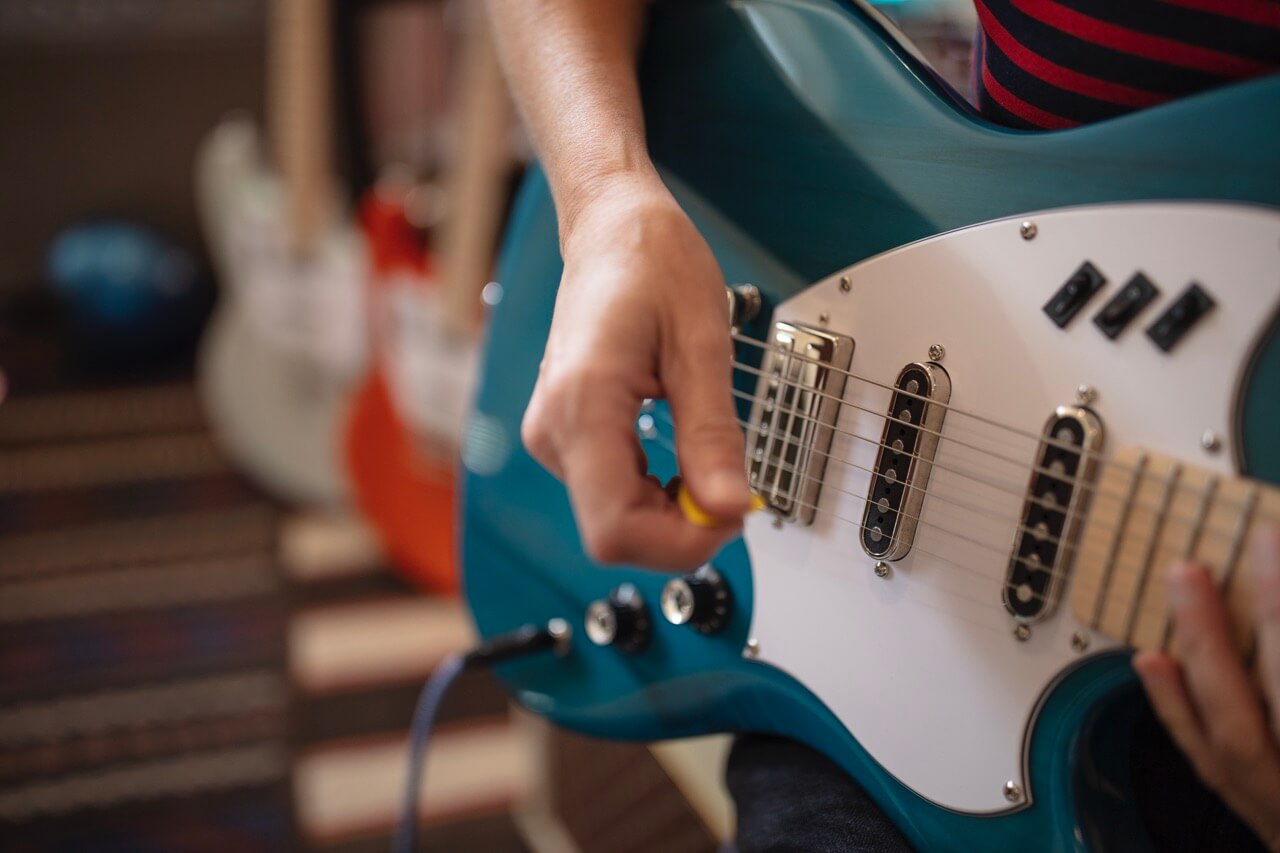 Some newly-designed Dearmond Aerosonic single-coils in the neck and bridge complete the old-school palette of sounds on offer. These nickel-shielded Alnico single coils offer a more bitingly-voiced sound, but they don’t become overly piercing, thanks to their placement in the middle and neck positions, and the inherently vocal sound of Alnico V magnets.

The Surfliner is also one of the few Guild guitars to have a 25.5-inch scale length, rather than the shorter 24.75-inch scale. What does this mean in practice? Well, a longer string length from saddle to nut means more tension: this snappier feel is a great match for the vocal voicings of the LB-1 and Dearmond Aerosonic pickups, and gives a tighter feel, great for keeping things in tune with aggressive playing, and for giving a more dynamic sound when you decide to turn the volume down. 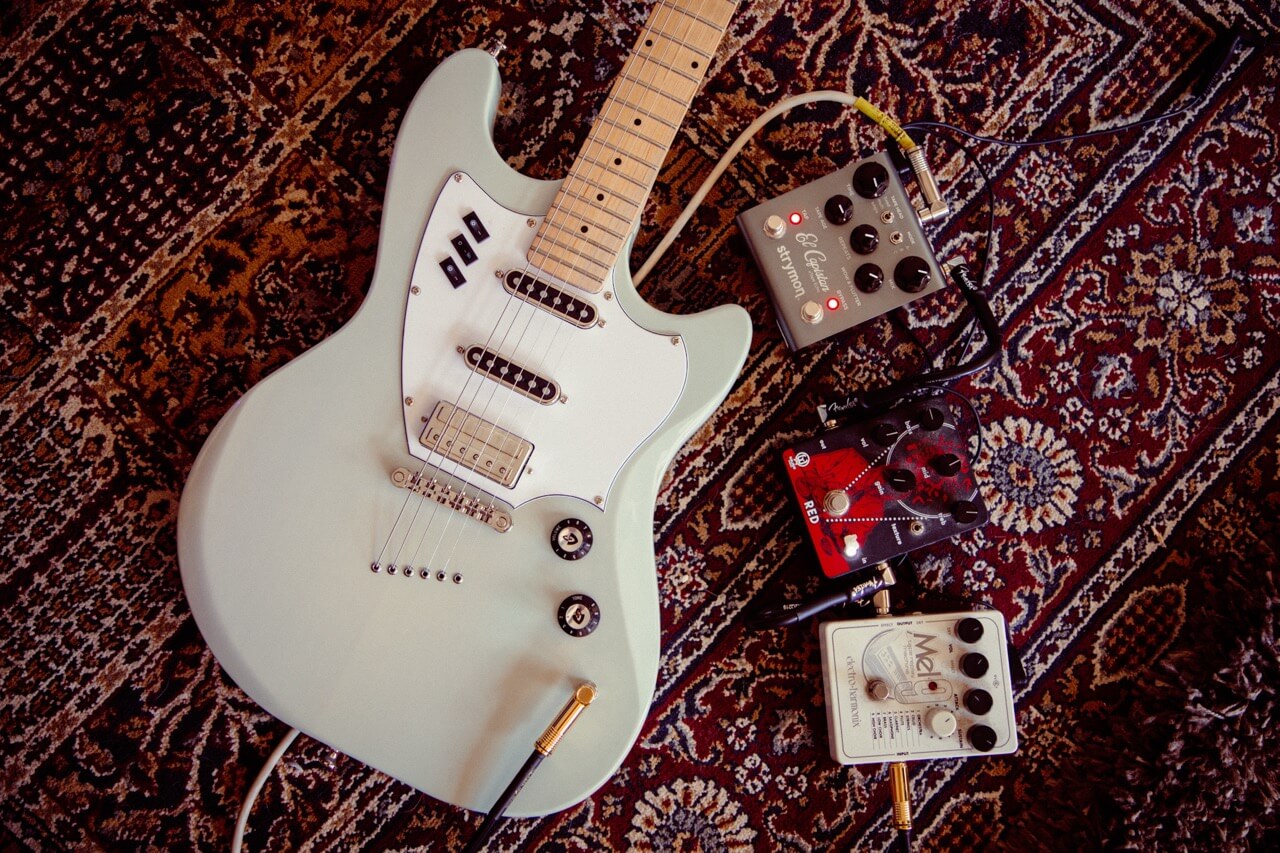 Bang for your buck

The Surfliner may be inspired by the retro Guild designs, but it’s by no means a no-holds-barred vintage recreation. It is instead an affordable production guitar with the modern player in mind, a great balance to see right now. Retro coolness is undoubtedly in, but the aesthetic is all-too-often pinned on unobtanium vintage guitars with mythical auras (and very worn frets), or bank-balance-shattering custom-shop jobs.

The Surfliner lists for a very reasonable £395 – perfect for the player who might not be able to afford a vintage masterwork, and likely to leave a hefty chunk of change out of most mid-range budgets, Great if you need to add a few pedals to your collection. And let’s be honest, when is that not the case? 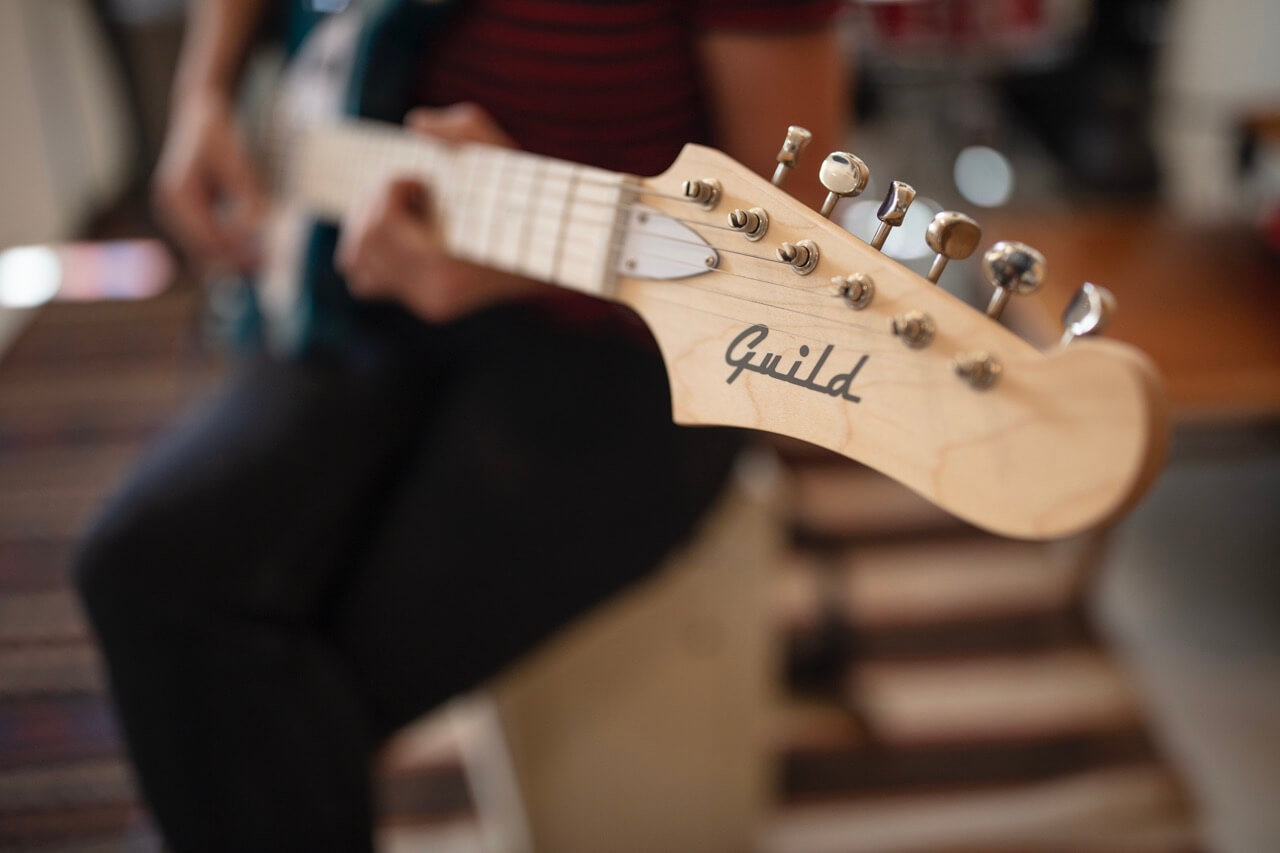 In short, £395 is a fraction of what you might think the Surfliner might go for. And that’s no bad sign – far from it. Guitars in this price range in 2022 are better than ever, and the Surfliner is no exception there – it speaks for itself, really, as some eye-catching looks, a great set of pickups and a comfortable neck are really all you need to make your playing pop, whether you’re on stage or putting together an Instagram reel or anywhere in between.

Find out more about the Surfliner at guildguitars.com