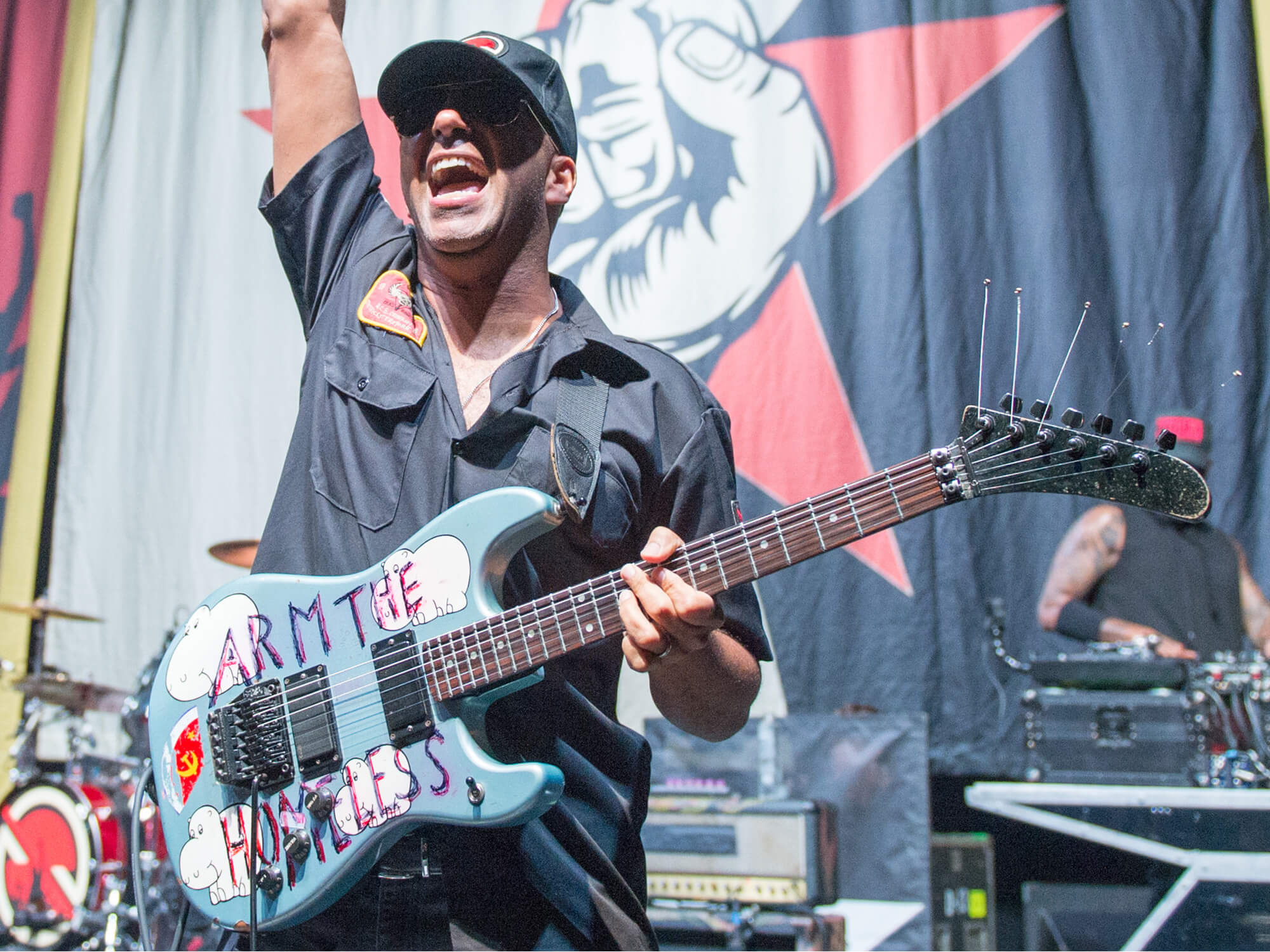 The story of Tom Morello’s ‘Arm the Homeless’ Guitar

Once a custom-made guitar now broken down and rebuilt beyond recognition, Tom Morello’s signature instrument has a fascinating and strange history all its own.

Tom Morello’s music career began in Electric Sheep. Formed by students at Libertyville High School in Illinois, the band also featured a young Adam Jones on bass. While Jones would later find his way to Tool, Morello would eventually pack up and move west in search of new horizons. Prior to joining his first band in California, Lock-Up, Morello had a guitar custom-made by Performance Guitar USA.

According to shop owner Kenny Sugai, who’d previously built guitars for Frank Zappa and Steve Vai, the specs of Morello’s custom guitar were based on those of a Fender Stratocaster. The instrument had a Fender C-type maple neck with a rosewood ’board and medium/jumbo frets. It was delivered to Morello with Seymour Duncan JB pickups and a Floyd Rose vibrato. The pickup-selector switch was on the lower horn and, since Morello goes through selectors at an alarming rate, Sugai says he even used an aircraft switch for extra durability. The original neck also boasted a beefier truss rod too.

Unfortunately, Morello was unhappy with the results and began modifying the guitar. Over the next year or two, it went through more than a dozen pickup swaps, several different vibrato bridges, ranging from Kahler to Floyd Rose, and three or four necks. The only original part of the guitar that remains today is its wood body. Ultimately, Morello later realized what many of us struggle to: that musicianship isn’t about gear but rather the way we use it.

“My guitar, which I’ve now had for 31, 32 years – something like that – I originally had it made at a fancy guitar shop in LA and everything about it was horrible,” Morello told Ultimate Guitar in 2019. “Through the years, between ’87 and ’89, I changed everything. The only thing that exists from it is the wood body, and I settled on it. I was trying to sound like Randy Rhoads or Nuno Bettencourt or something, and I was just never going to get there. So I just decided I was going to take whatever sound this thing makes and I’m going to create with it. Since then that guitar has become a very dear collaborator.”

Other additions to the guitar down the years include many products said to be on the cutting edge of technology at the time. One of them was a Fathead sustain plate. Usually brass or aluminum, these plates are fastened to the back of the guitar’s headstock to add mass and, in theory, sustain to its sound. In spite of the Fathead falling short of Morello’s expectations, it remains on the guitar today.

Eventually, Morello decided to stop searching for improvements through accessories and instead focused on finding inventiveness through his playing.

“There was a time when I bought gear to try to improve my playing,” Morello told Ultimate Guitar. “I found that by embracing limitations and going, ‘This is my gear, the only variable is going to be my imagination and creativity’, I was much more creative. Rather than buying some rack gear that is going to make me sound like X, Y, or Z, I’m just, like, ‘This is all I got, so what can I do?’ Well, I can rub the Allen wrench on the string or I can unplug the jack and use that as an instrument or I can use the toggle switch in unconventional ways. That just opened up so many doors rather than trying to supplement my imagination with something that was bought at Guitar Center.”

Today the guitar sports its original alder body with a Floyd Rose vibrato, and a Les Paul-style three-way switch effectively used as a killswitch – Morello turns one pickup down or off and then switches between the middle and silent pickup to create the killswitch effect. The guitar has an EMG H, a single-coil in a humbucker housing, in the neck position, and an EMG 85 in the bridge. The neck is a graphite knock-off Kramer neck from a bin at Nadine’s Music. The guitar is Morello’s main instrument for anything in standard tuning.

The ‘Arm the Homeless’ decal and the guitar’s smiling hippo graphics were added by Morello. “We were set to play at the Whisky [a Go Go] and, just before going over to soundcheck, I scrawled ‘Arm the Homeless’ on the guitar. I liked the juxtaposition of that kind of provocative and militant situationist slogan with those four smiling hippopotamuses all facing in one direction.”

While many fans of Morello’s tone have created replicas of his ‘Arm the Homeless’ guitar in the hopes of achieving a similar tone to that which can be heard on so many great recordings, from Rage Against the Machine and Audioslave to Prophets of Rage and his solo work, ultimately, they all come to the same realization that Morello did: the most important aspect of a guitar is the imagination of the musician holding it.

Fender has teased the idea of doing more Morello signature models in the future, and the ‘Arm the Homeless’ guitar must be top of the list. That said, when Morello ordered a backup for the guitar, he got it from Ibanez, but he still prefers to use the original guitar for live performances. It has appeared on every record Morello has ever made.