The Great Backline Wars of the 1970s led to many a rock band casualty, yet Phil Harris wouldn’t have missed the experience… 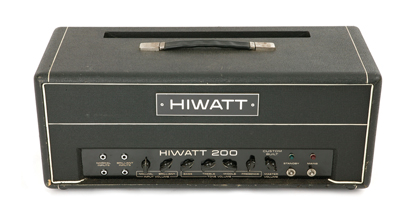 The inspiration for this feature came while I was trying to find a car parking space at St Thomas’ Hospital for the umpteenth ear check-up I’ve had in my life. For all the times I’ve written about the beauty and the history of guitars and amps (and will continue to do so), all the joy that this lovely gear has brought me has come at a price. But thanks to wonderful medical advances, I can now hear better than I’ve been able to in decades, and I feel all the more grateful, knowing that the damage to my ears has all been self-inflicted.
You see, back when I was a young guitar player, if you weren’t going through a 100W stack at full volume, then – to put it a bit less crudely than is possible – you weren’t considered to be a very well-endowed guitar player. You wanted everything to go up to 11. I knew it was damaging my ears. I didn’t care.

It all finally came to a head in 1974 when I was playing an outdoor gig in Dublin at the end of a tour of Ireland. I felt my neck go cold, and when I put my hand to my neck it was covered in blood. I went off stage, got my ear taped up, and went back and finished the gig (it was what you did in those days).

The doctors rebuilt my ear and told me to look after my hearing. At that point you would have had to shoot me in order to take that advice, so it went again a few years later. I’ve no desire to be disrespectful to the medical profession – and I wouldn’t encourage others to follow my example. However, there’s a magic to playing the electric guitar very loudly that just can’t be beaten.

It wasn’t about the sex and drugs back then – it was also about the rock’n’roll… and the volume you played and heard it at was all part of the fun. So although I’ll be visiting doctors about my hearing for the rest of my life, I don’t regret a single moment of it. Here are some examples of things that can get your ears ringing…

1955 Gibson Les Paul Junior
I once used a ’55 Junior as a replacement guitar for my Standard at a gig in Manchester back in the ’70s. I kept the normal settings on an Orange stack, and the difference in output was staggering. It frightened the crowd, the band – and me

1955 Fender Stratocaster
This is included as a tribute to Jimi Hendrix – a man who knew how to work the mystical properties of volume. He could hit a note and then the harmonic would catch on the air and come out at three times the volume. Pure genius

1970 Hiwatt AP200
A Hiwatt is an essential part of any ‘vintage volume’ collection. In terms of the sheer output, this amp could more than hold its own with anything. This is one of the many amps I played way above safety levels in pursuit of the best sound possible, even when in the studio

1967 Marshall Head and Cabs
This Super Lead Plexi and cabinets were prime weapons of a guitar player’s sonic arsenal. The looks alone were enough to make you want them, never mind the sounds you could get – and the amount of air you could push. Plugged into this stack, you really felt like a true guitar player

1964 Vox AC30
By the early ’70s combos already seemed to be from a bygone era. However, I did use them in a pop band I was in around that time; I had two AC30s daisy-chained into a 200W Hiwatt head that was plugged into two JBL D130S cabinets… and that was just part of my setup!

1971 Rickenbacker 4001
They may look lovely, but bassists like my brother Mo used the stereo capacities of his Ricky to increase the air he was pushing. He wasn’t in Led Zeppelin, but he ‘needed’ to have an amplifier for each pickup. And yes, his hearing also took a real battering