Why you should steal from other guitarists

Not their gear, of course, but their licks. Copying the style of famous axe-slingers can be good practice—these guitarists explain how. 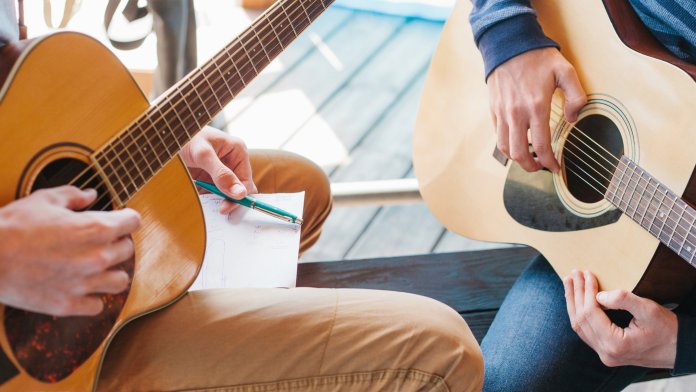 You’ve read their biographies, put their hits on loop for an entire month, and memorized all the lyrics. Then you strap on a guitar and try to mimic your favorite musicians down to the clef—but, wait, aren’t you supposed to be ‘original’ and create your own tunes? Well, these five guitarists explained how there may be truth to the platitude “good artists copy; great artists steal.”

“You learn from listening to any guitar player”: Otis Rush

It’s how we all decided to pick up the guitar in the first place: trying to emulate our heroes. Even a blues icon like Otis Rush wasn’t afraid to admit he got his chops from listening to other guitarists.

“You learn from listening to any guitar player,” he told Guitar.com. “If you’re interested in learning about music, you just pick up things from each other. And from that, you put it into your style. But you don’t forget those particular notes, so you make up your own song. We all play like one another in a sense. If we all had to play our own music, there wouldn’t be too many musicians!”

“I try to find the essence of the song”: Johnny A

Johnny A, who’s one of the newest additions to The Yardbirds, matured as a guitarist not by studying music theory but by listening to his heroes. He didn’t try to emulate them—not exactly.

“When I listen to a player—whether it’s Jimi Hendrix or Chet Atkins or Jeff Beck—it’s not about me stealing a lick from them,” he said. “It’s about me trying to get into the essence of why they sound the way they do. It’s got nothing to do with the instruments they play [or] the amplifiers they use. It’s got to do with their soul and how they filter their soul through their hands and their heads.”

Identifying the nebulous “essence” helps Johnny from a compositional point of view. When he’s writing a tune, he siphons the ‘souls’ that he discovered from other guitarists. “[If] I’m trying to develop a solo for [the song], I might be thinking Pat Martino. [If it’s another song], I might be thinking Albert Lee. It’s whatever the song dictates to me. I don’t try to copy anybody; I just try to find the essence of the song, and where [it has to go].”

“You start off just emulating what you like”: Andy Summers

Most of us are still searching for something that reflects who we are in our playing—but that takes a long time, according to Andy Summers. The former guitarist of The Police thinks the first step should be following in the footsteps of those who have gone before.

“You start off just emulating what you like and a couple of players,” he said. “Try to learn the language, whether that’s rock, jazz, blues, whatever. And then maybe you’ll combine all the things together. You start playing what you like.”

Summers stressed that being contrarian and playing the guitar differently for its own sake isn’t quite the answer. Instead, spending years listening to the guitar canon and contemporary musicians is more useful in charting your own course. “You just have to keep going with the right sincerity, and it’ll come to you. I’ve been playing all my life and I believe that I’ve had a very heartfelt approach to music. I’ve always really loved it—I’ve never done it for commercial reasons.”

“I began to long for a signature sound of my own”: Jon Herington

Being enchanted by legendary jazz guitarists, ironically, led Jon Herington down his own path. “I was so struck by the individuality and originality of so many of the great jazz players I listened to that I began to long for a signature sound of my own,” the Steely Dan guitarist recalled.

While Herington still reasons that having heroes is “necessary” when learning to play an instrument or master a genre, it isn’t always helpful for figuring out your style: “Original voices seem to be the result of a more personal search: the discovery of how you alone hear and feel things. Time and maturity were what it took for me to realize that I knew enough about the guitar, and was comfortable enough playing it. So the development of an original voice was the next step.”

“You can’t break out of the groove”: Michael Schenker

Of course, many musicians don’t buy into any of this copycat stuff. Michael Schenker is one of them. “If a guitarist copies for too long, they create, like on a record, a groove,” the former Scorpions axeman said. “And if you do it, you can’t break out of that groove. You’re stuck with someone else’s style—and that’s a disadvantage.”

To Schenker, there are two broad types of musicians: one who sticks with a trend, and one who uses the art form to express themselves. It’s clear in which camp he falls. “The fun part of being creative is [having] no limits, and to really do what [you] believe,” he said. “It’s about self-expression. And the purer the self-expression, the more we can find unusual things that are all hidden in the ocean of endless, infinite creativity.”