The best guitars to buy in 2020: 10 best electric guitars for beginners

Our guide to the most affordable, versatile and easy-to-play electric guitars in the current market. 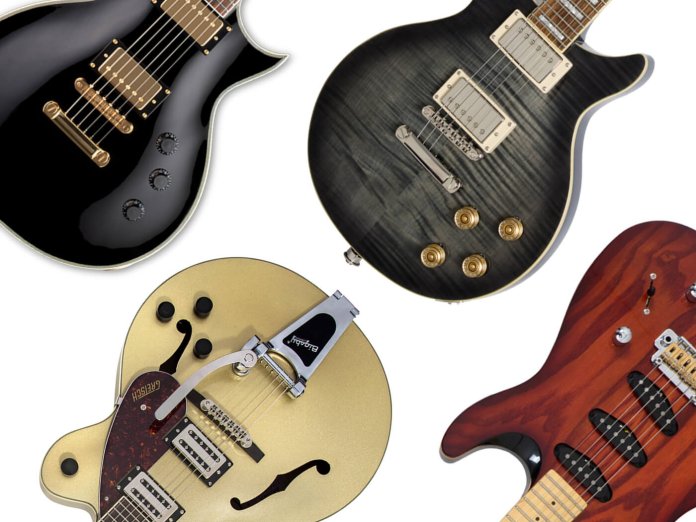 Picking your first guitar isn’t always as straightforward as it should be. That’s especially the case in 2020, due to how accessible the instrument has become and the plethora of options available. From budget Strats to Dinky’s, there’s a daunting amount of six strings on the market.

To give you a head start, we’ve compiled a guide that will help you kickstart your six-string journey. Here, you’ll find guitars that score highly across four metrics: affordability, simplicity, versatility and coolness. We believe a beginner’s guitar should be easy to navigate, neutral or flexible enough for a range of styles and genres and reasonably priced, too.

So, dive in and see what tickles your fancy. You might even be drawn to something you weren’t expecting…

New for NAMM 2020, Gibson stole the show with their relaunched Epiphone Inspired by Gibson range, complete with a new open book headstock. Fans have been crying out for the traditional headstock on Epiphone’s and Gibson’s more budget-friendly models, and now they can rejoice.

It’s one of those guitars you have to force yourself to put down because it sounds wonderful and has no discernible compromises. If you don’t like fat necks, you probably won’t like this one, but we find its playability hard to fault and overall, we’re blown away. When you factor in the remarkable price, it’s hard to find any faults with this beautiful guitar.

If you aren’t already playing metal, the Jackson JS22 Dinky will do its utmost to change that. This guitar represents all the things upon which the brand has staked its claim to fame: metal- and rock-ready performance guitars with speedy necks and bold humbuckers.

Featuring a compound radius fretboard, it’s as comfortable to hold down chords as it is to shred at break-neck speeds when you venture past the twelvth fret.

In terms of aesthetics, the Dinky doesn’t disappoint. Its arched top, pearloid sharkfin inlays and all-black hardware make the guitar stand out from the pack, while bindings on the neck give it that high-end glamour.

If playability ranks high on your starter guitar requirements, look no further than Ibanez’s S521. This instrument features the brand’s Wizard III maple neck, a thin, flat and sturdy base for you to hone your lightning-quick chops. Complementing the neck is a 15.75-inch-radius jatoba fretboard, which should provide you with a solid grip when playing.

The S521 derives its tone from two Quantum humbuckers. These pups boast great low-end response, beefy midrange and articulate high-ends – a perfect combination for heavier styles. There’s nothing overly complicated about controls, with a volume knob, tone knob and five-way pickup selector at your disposal.

On the hardware front, the S521 offers solid choices, including a fixed bridge with six fully adjustable saddles. This will aid with intonation and action adjustment, on top of providing tonnes of sustain.

If you’re looking for a six-string that carries all of the high-end retro styling you can expect from Fender but without the price tag, the Squier Classic Vibe 70s Jaguar is the answer. With two Fender-designed alnico single coil pickups, a nickel-plated vintage style trem and floating bridge, it’s suprising it comes in at just £389.

With a comfortable C-shaped neck and 70s style block-inlays, players young and old will also appreciate its 24″ short scale length. Perfect for those with smaller hands, or those who are looking for something that’s just a little more fun to play.

With a vintage-tint gloss neck and headstock and in a choice of Surf Green (obviously the coolest), black or three-colour Sunburst, this guitar is guaranteed to turn heads. Just wait until you tell them that it’s under 400 quid…

The Chapman ML1 traditional is branded as a “trusty companion”, and for good reason. The guitar’s fingerboard and neck are touted to wear with grace, moulding into an instrument of your own after a period of time. You’ll also have access to a variety of tones from three single-coils, which serve up crisp chords, soaring leads and everything in between.

The guitar features a body crafted from ash, a tonewood with decent resonance and a slightly scooped midrange – perfect for blues and indie genres. The ML1 also scores well for playability, with a rear heel contour – allowing easier access to upper frets – and rolled edges on its maple fretboard. The latter makes practice that much more comfortable.

When it comes to tone, this axe certainly does not hold back. It’s loaded with three Venus Witch Zero single-coils featuring alnico V magnets. These provide a sparkly twang which complements the instrument’s ash and maple tonewoods perfectly. Tone can be easily shaped with just two master controls – volume and tone – as well as a five-way pickup selector.

Announced at NAMM 2019, this guitar has reinvigorated Gretsch’s Streamliner range with the all-new Broad’Tron BT-2S humbuckers and a slew of finishes. If your first steps in the six-string world lean towards jazz, this Indonesia-made hollowbody is a great option.

The two Broad’Tron BT-2S humbuckers mentioned above are capable of defined lows, sparkling highs and a throaty midrange – a combination that is tailored for blues and jazz. These pups are also wired to a comprehensive set of controls: master volume, master tone, neck and bridge volume, and three-way selector. While these may seem daunting at first, they provide a good introduction into tone-sculpting.

In terms of build, the G2420T straddles the line between style and playability. It features a comfortable 12-inch-radius laurel fingerboard, a thin U-shaped neck – varnished with gloss urethane for a smoother feel – and enlarged f-holes for improved acoustic projection. The Bigsby trem also lends as much stability as it does street cred.

As its name suggests, this 2018 Mexican-made model is for the players. Its satin-finished neck is designed to sit comfortably in your hands as you conjure classic single-coil twangs from two alnico V Tele pickups.

As far as playability goes, the Fender Player Telecaster features a 9.5-inch-radius fingerboard, modern C-shape neck profile, and glossy neck finish – contributing to fuss-free movement and enhanced comfort. The ingredients to tone, on the other hand, lies with the instruments’ two alnico V Tele single-coils. These deliver that classic Tele tone, but also have an edgier profile that might be suited to those working their way up to fiery leads.

All in all, beginners will find the Player Telecaster to be a trusty workhorse, capable of cutting it across a variety of genres, from country all the way to high-octane rock ’n’ roll.

Don’t be put off by the Squier logo on the headstock. This model encapsulates a Strat’s reputation of being a versatile axe that can swerve from rock to blues to funk, and everything in-between. It isn’t only for beginners – seasoned players who don’t care about brand names can also get their Strat fix with the Classic Vibe.

The three alnico III single-coils, wired up in five positions, are partly responsible for that. You can go from glassy tones of the neck pickup to the bite of the bridge pickup to the ‘quacks’ of the positions in-between, the latter of which refers to two single-coils activated in tandem.

Like many Fender Strats, this one has a lightweight alder body, maple neck and maple fretboard. Its C-shaped neck and 9.5-inch fretboard radius mean it’s comfortable for both rhythm and lead playing, while a vintage-style synchronised tremolo bridge makes the guitar even more of an all-rounder.

Dollar for dollar and feature for feature, the Epiphone Dot is arguably the best semihollow out there. It retails for a little over $400, and is versatile enough to take you from rock to blues to jazz, easy. Frankly, we wouldn’t recommend a semihollow to beginners, but if you must have one, check out the Dot.

In simple terms, the Dot is a budget Gibson ES-335. And like the far more expensive guitar, this one has a laminated maple body and top, a mahogany neck, and a centre block running within the otherwise hollow body to help out with the sustain and feedback.

The biggest difference between the two (besides the logos on the headstock, of course) is in the pickups. The Dot uses Epiphone’s Alnico Classic humbuckers, which admittedly don’t have the character, clarity and singing mid-range of the ES-335’s PAF-harking Gibson Burstbuckers. But they’re still ace for the price: clean, thick and punchy.

You won’t be able to throw the horns up and unleash metal riffs with the Dot, yet it’s versatile enough for most types of rock, blues, country and jazz. Thanks to the centre block, you’ll be able to drive this fella hard. And lest we all forget, the Dot clocks in at about an eighth of the price of a new 335.

Having been in the market for over two decades, the Pacifica is Yamaha’s gift to all beginners out there. Whether you’re looking for excellent construction, quality tonewoods or enhanced playability, the Pacifica 112V’s got the features to back its reputation as one of the best starter axes around.

Take its body for instance. Like Strats, the Pacifica sports an alder body with contours, albeit upgraded with deeper cutaways. It also has a C-shaped neck with 22 frets (not a Strat’s 21) that make it easy for beginners to maneuver.

But the Pacifica’s got unique specs, too. Its pickup configuration of two single-coils and one alnico V humbucker on the bridge yields clear, rounded tones with a boosted midrange. Combine this with a five-way switch, and you’ve got a guitar that not only emulates that shimmering Fender sound, but delivers across a variety of genres, too.