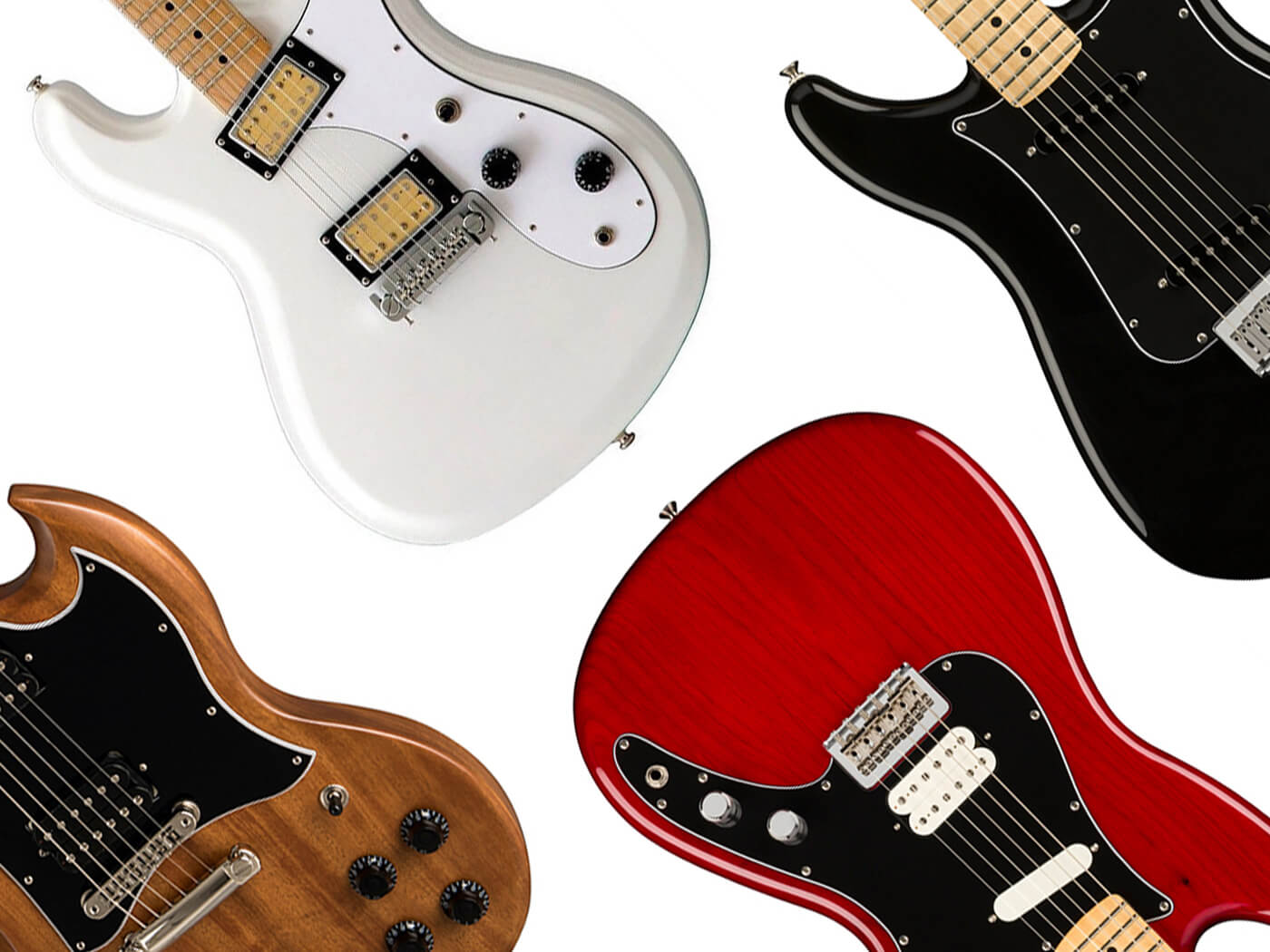 Very quickly, picture in your head what a “punk” guitar looks like. Do you imagine a dilapidated hunk of wood, mummified in duct-tape, electronics hanging for dear life? Well, it might surprise you to find that more punk musicians these days are rocking brand-new gear in lieu of “pawn shop specials”.

Make no mistake, punk hasn’t gone completely posh – there are just so many great ‘econo’ guitars on the market today. Our picks for this list had to satisfy these factors: a modest price tag, tour reliability, as well as style – for as John Reis of Drive Like Jehu once said: “I am a firm believer that the cooler the piece of gear looks, the better you will sound using it.”

The SG could unironically be thought of as the hardcore punk gold standard in guitars – after all, Ian MacKaye played one throughout his years in both Minor Threat and Fugazi, and it’s even been adopted by esoteric punk rockers like Melt-Banana’s Ichirou Agata. Perhaps it’s the SG’s simplistic 3-way switching, or its sheer durability on the road – regardless, the model continues to be a punk staple to this day.

Yes, classic Jazzmasters are beauties, but a punk could do without their complex circuitry and admittedly troublesome bridge. Enter the Squier Affinity Series Jazzmaster HH. The guitar is a stripped-down rendition of a vintage-spec’d Jazzmaster, sacrificing configurability for simplicity, aggressiveness and affordability – which makes it one of the best punk guitars around.

The Squier Affinity Jazzmaster is a guitar to simply sling on and rock out with, no fiddling with dials and switches necessary. Its two surprisingly hot Squier humbuckers are wired to a simple three-way pickup selector switch, and master volume and tone knobs. While it doesn’t possess the refinement or pristine sounds of other Fenders, this Jazzmaster is all about those distorted tones for blood-and-guts rock and punk.

Its construction matches the simplicity of its circuitry. A one-piece C-shaped maple neck, with a satin finish, is comfortable in your hands, especially if you’re playing hard and fast over extended periods. A 12-inch-radius rosewood fretboard makes it favourable for modern guitarists, and a six-saddle hardtail bridge keeps the guitar in tune better than an original Jazzmaster’s screw-type saddles would.

Like the 70s-era muscle cars it resembles, the Reverend Super Rev is loud and abrasive – it’s not trying to be the most refined instrument around. Thick and fat tones thanks to a single Railhammer humbucker, and fuss-free playability make this retro six-string an ideal punk rock guitar.

At the heart of the Super Rev is a single Railhammer Alnico Grande humbucker that’s developed by Reverend founder Joe Naylor. It’s been wound hot to achieve a fat, round sound that’s characteristic of the best punk guitars. Rails under wound strings and poles under plain strings serve to enhance clarity, so you’re both loud and clear.

A Bass Contour knob, which appears on almost all Reverend guitars, gives the single-pickup configuration a little more versatility. It’s a passive bass cut that can tighten up your low end and even elicit single-coil tones from the Railhammer humbucker.

The Super Rev is also the only guitar on this list that has both a korina neck and body. The tonewood, which has been used on such legendary guitars as the Gibson Flying V, has a sweet midrange and fantastic responsiveness. Furthermore, it’s lighter than its closest relative, mahogany, so swinging this around on stage won’t be a back-breaking affair.

And you can’t deny that those racing stripes and bold finishes – it’s available in lime, orange and yellow – will command the attention of the crowd.

Eastwood’s Hi-Flyer Phase 4 is based on the Univox Hi-Flier – a guitar famously played (and later smashed) by Kurt Cobain, Justin Trosper of Unwound and Lee Ronaldo of Sonic Youth – who also possibly smashed his.

While the original Hi-Flier has a slightly convoluted history – the gist of it, is that mass production of the model at the Matsumoku factory in Japan led to them being common sights in pawn shops around the late 80s and early 90s. This availability and affordability made the Hi-Flier especially popular with bands that toured relentlessly.

What you may not notice just looking at the Hi-Flyer Phase 4 is how light it is, a result of the guitar’s double-cut basswood body, which just for its looks – is a definite feature. The Hi-Flyer Phase 4 sports a noticeably skinny, bolt-on maple neck that’s built for speed, and stays comfortable even after the longest of sets.

This guitar employs two Phase 4 Humbuckers – which on a clean channel offers jangly tones, and with distortion is harmonically rich and mid-focussed. Controls on the guitar include a three-way switching system, and a pair of knobs for volume and tone. This model also makes use of a Mintech wrap-around style hardtail bridge.

A true punk icon, Gibson’s single-pickup student guitar found its true calling in the late 60s when garage rockers began picking up the instrument. Its no-nonsense demeanour and sheer power contribute to its place as one of the best punk guitars.

Designed to be as robust as possible, the Junior sports a flat top in lieu of the more commonly seen arched top. Just as it was when first introduced in 1954, this edition rocks a solid slab mahogany body and neck.

Key to the guitar’s signature growl is its single Dogeared P-90 pickup, which delivers thick, bright tones out the wazoo. To get a better feel for what we mean, just listen to the work of Billie Joe Armstrong, Paul Westerberg and Mick Jones.

Other than that, there aren’t too many other features that sit with the Les Paul Junior – but it’s exactly that simplicity that makes it such a great guitar for punk rock. And while it does sit on the high-end of this list, what you’ll find is that it makes for an incredibly reliable high-output companion.

Fender’s revival of the Lead Series saw the reissue of the Lead II and III models earlier this year. These stripped-back beasts combined the reliable Strat build with elements of the straight-forward Tele, to create a familiar feeling instrument with easy controls and dependability in a live situation. One of the series’ longest adopters is Mission Of Burma’s Roger Miller, whose relationship with the Lead series has spanned over three decades.

If you’ve ever handled a Stratocaster, you’ll feel right at home with the Lead II – as the instruments share more similarities than differences. Affixed to its alder body is a bolt-on maple neck with either a maple or pau ferro fingerboard. The Lead II packs two Alnico 5 Strat single-coils that offer brisk clean tones with no shortage of treble.

Controls on the Lead II include your standard volume and tone knob, as well as a three-way pickup selector and a phase-reverse switch – letting you quickly mingle in garage punk territory. As the sound takes on a more tinny quality when phase-reversed, it could sound especially potent paired to a germanium fuzz.

If this one seems familiar, that’s because it’s an upgrade of the older Jimmy Page model. The ’59XT is, thanks to its pickups, a more aggressive beast altogether. Ramones fans, new wave musicians, and other punk rockers with a flair for vintage aesthetics will find a home for this affordable, retrolicious guitar.

Snobs may scoff at the ’59XT’s chambered Masonite body. But plug the guitar in, crank up the amp, and the rich, fat and velvety tones that it’s capable of will zip the lips of any naysayer.

Those sounds come courtesy of the guitar’s unique pickup configuration of a P-90 at the neck and lipstick humbucker at the bridge. Both pickups, which are offset, are aggressive and growling with a musical midrange bump. The lipstick humbucker has also been coil-split, so you can use it as a single-coil, too.

But due to the semi-hollow body, you don’t want to pile on excessive amounts of gain. Just a moderate amount is enough to dial in that Velvet Underground gristle, Television snarl and Echo & the Bunnymen insouciance.

The latter – particularly that ringing vibrato chord on Killing Moon – is also easy to execute on the ’59XT due to its Wilkinson tremolo. It’s a sensitive trem system, and allows for deep dives and pitch changes that appear more frequently on post-punk, new wave and even no wave songs.

Originally launched by Fender in 1956 as a student guitar, these versatile short-scale instruments quickly found themselves in the center of New York’s burgeoning underground scene – having been adopted by musicians like Patti Smith, David Byrne of the Talking Heads, and members of proto-punk group Television. When it comes to touring, the Duo-Sonic’s small stature comes as a feature – not a downside, as this guitar easily finds its place in a trunk during loadouts.

In addition to a smaller alder body, this Duo-Sonic’s 22-fret maple modern C neck and fingerboard offers added comfort for players with smaller hands. Whether you seek more jangly type tones, or a full-on Cro-Mags style distortion – there’s a plethora of sonic options to be found within the guitar’s single-coil neck and humbucker bridge combination, which provides additional coil tap function.

The only downside to the Epiphone Les Paul Special might be that it suffers the stigma of being “cheap”. Think of the Les Paul Special as a guitar that trims the fat – offering what truly counts in a solid instrument. What you will find is a well-rounded instrument, that’s a more-than-ideal conduit for channeling raw power.

The Les Paul Special starts off with a solid slab mahogany body with a set mahogany neck, and bound Indian laurel fretboard. The guitar’s two P-90 Pro soapbar pickups offer a bright and full sound that can be best described as: “spanky”. Thanks to its TV Yellow finish, and “ivory” button tuning machines – the guitar sports a great vintage look that is just really inspiring to play. Truly, this guitar is meant to be more than a backup instrument in your backline.

The Telecaster is a generation spanning punk staple that’s been vehemently wielded by legendary players like Joe Strummer of The Clash and Brian James of The Damned, as well as new pioneers like PUP’s Steve Sladkowski. Throughout its countless iterations and decades of service, the Tele still upholds its spirit of being an instrument of true versatility

The Player Telecaster begins with an alder body and modern C neck – which players with sweaty hands will be glad to know, sports a satin finish at the back for smooth playability during the heat of a gig. This Tele still outputs its signature twang, albeit with a hotter-than-usual upper-mid range, as it equips a set of Alnico 5 single-coils. This could be great for achieving those D Boon’s style twang-punk tones. Controls are standard Telecaster: a three-way pickup selector, volume knob and tone knob. In terms of hardware, you’ll find a synthetic bone nut, a string-through bridge and standard cast/sealed tuning machines.