Bigger isn’t always better – try one of these smaller practice amps on for size. 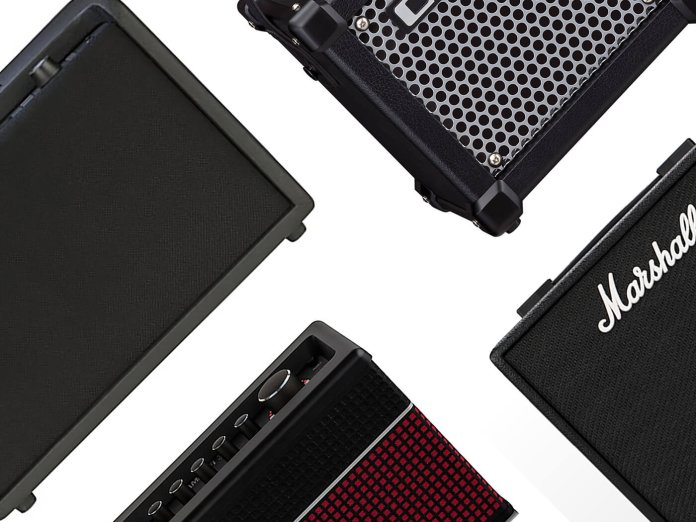 Practice amps have come a long way since the old, spitty-sounding, battery-powered amps of the aughties. These days, it’s not uncommon to find budget-friendly practice rigs boasting features such as wireless connectivity, remote editing and fully customisable presets. With that in mind, let’s take a look at the 10 best practice amps on the market today.

Controls on the amp are fairly standard, but you also have the option of controlling the amplifier through the THR Remote app via Bluetooth. This functionality also allows playback of music through streaming services. To top it all off, the amp boasts wireless capability, so you won’t have to deal with cables. The caveat for this feature, however, is that the Line 6 Relay G10T transmitter is sold separately.

If you’re in the market for an affordable, no-frills practice amp, the Mini-ST Lion may just be it. It’s a three-watt, battery-powered amp featuring a pair of three-inch drivers and two channels: Clean and Drive. Controls are as straightforward as they get, with dials for gain, drive, level, tone, delay, delay level and volume.

The most “superfluous” addition to this amp is the Laney Smart Interface socket, which allows you to connect the amp to a phone or tablet. This lets you tap into tones offered by a variety of apps, including Ultimate Guitar’s Tonebridge, which offers over 1,000 guitar and bass tones. As a nice bonus, purchase of this – or any Laney Mini amp – comes with a free three-month subscription to Tonebridge.

Quite possibly the most value-for-money option on this list, the Blackstar Fly 3 is a three-watt mini combo that features two channels, an emulated tape delay, an MP3 / Line In and the brand’s patented Infinite Shape Feature (ISF) tech. The latter gives you access to both British and American voicings, while the MP3 / Line In is perfect for guitarists who want to jam along to their favourite tracks. In terms of power, the Fly 3 takes six AA batteries or DC, if bought as a Stereo Pack (comes with a FLY 103 extension cabinet and power supply).

Looking for something with a little more punch? The GT 40 is a digital modelling amp that pumps 40 watts out of a pair of 6.5-inch drivers. There’s also a little bit of everything to be had with this amp, which comes packaged with 21 newly-upgraded amp models, which includes classics such as the ‘Brownface’ Deluxe Reverb, ‘Blackface’ Twin Reverb, ‘Tweed’ Champ, Bassman and more.

Wi-Fi functionality aside, the Mustang GT 40 also offers plenty of opportunities for tweaking via the Fender Tone app. Serious tone chasers can even access settings for tube amp features like bias and sag, which can have a small but tangible impact on tone. The amp also comes with 46 effects that can be placed pre or post in the virtual chain for different effects.

It’s not enough to have the title of “world’s first wireless amp” – you also need to have the substance to back it up. Boss’ Katana Air packs 30 watts of output, five amp models and over 50 Boss effects into a simple handheld format no bigger than a guitar tech’s toolbox. A single full charge powers the Katana Air for 12 hours, but you can also use eight AA batteries to provide 20 watts of output for seven hours.

The standout feature on the Katana Air is its stereo headphones/recording output, which lets you record directly into a DAW or practice silently with full stereo sound. There’s also the option of playing along to music streamed wirelessly from a mobile device via Bluetooth.

The Orange Crush 20 is perfect for bedroom distortion addicts thanks to its high gain preamp design. The amp features four stages of gain, taking it from chimey cleans to classic bluesy crunch to full-bodied metal distortion. You can also switch between the clean and dirty channels seamlessly with the Orange Crush 20’s optional footswitch.

The amp’s headphone/line output does more than it lets on. Plugging in allows guitarists to take advantage of Orange’s CabSim feature for silent practice and direct recording. This offers a faithful emulation of a mic’d Orange 4×12” cabinet loaded with the brand’s flagship Voice Of The World speakers.

It’s hard to imagine Vox’s ADIO AIR GT as a 50-watt amp, yet that’s exactly what it is. The amp’s proprietary slant-bodied chassis houses two three-inch speakers that power the amp’s stereo setup. Its tone is amplified by a new bass reflex structure that delivers a sound density far exceeding the unit’s size, and an inner box that delivers the depth you expect from stereo speakers.

The ADIO AIR GT’s modelling capabilities is courtesy of a high-performance DSP and Vox’s Virtual Element Technology to model the output sound of the selected amp – right down to circuit components and design. The amp comes packaged with 11 amp models, which can be expanded to 23 via the free Tone Room software, downloaded separately.

Roland’s Micro Cube GX certainly looks like the old battery powered amps of yesteryear, but it’s so much more than that. The amp uses Composite Object Sound Modelling (COSM) to reproduce the sonic imprints of classic amps, right down to their individual component level. It comes with Roland’s i-Cube Link interface, which allows users to play along with music tracks and send studio-quality tones with effects straight into their recording app of choice. The i-Cube Link can also be used as a stereo input to turn the Micro Cube GX into a home amplifier system.

The Micro Cube GX comes with eight COSM amp tones and eight DSP effects, providing tones for just about every musical genre imaginable. There’s also the added Extreme amp model that delivers a full-bodied voice perfect for crushing metal riffs. Guitarists can also run the Heavy Octave effect for adding unique, ultra-low power to distorted tones. And to wrap things up, there’s also a Mic setting for use with a vocal microphone.

With 100 pre-loaded, fully editable presets, it will take a lot to get bored with the Marshall CODE25. The 25-watter comes with 14 Marshall-Softube (MST) preamps, 4 MST power amps and 8 MST speaker cabinets – perfect for tone experimentation. User-customised presets can then be uploaded to the global library using the MyMarshall cloud service for storage and easy retrieval.

The CODE25 also comes with 24 different built-in effects, five of which can be run simultaneously. Additional amp controls can be retrieved with the Marshall Gateway app, available for both iOS and Android devices.

Line 6’s AMPLIFi 30’s lunchbox amp format makes it an easy grab-and-go amp for almost any home practice scenario. It comes with a companion AMPLIFi Remote app that allows users to select from over 200 legendary guitar amps, effects and speaker cabinets like the 1968 Marshall Lead ‘Super Lead’, 1987 Roland JC-120 2×12” cabinet and the Chandler Tube Driver. Automatic tone-matching is also available via the Line 6 Tone Cloud. Rounding out the amp’s features is a unique four-way stereo speaker setup that delivers a realistic and three-dimensional sound, all from a compact and affordable package.