When it comes to affordability, it doesn’t get more value-for-money than these guitars. 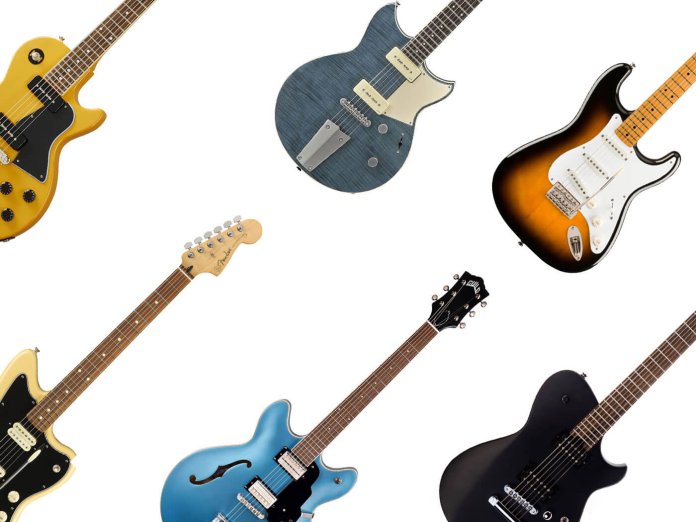 The words “cheap” and “expensive” in the world of guitars are volatile things, their definitions shifting around depending on your level of experience with the instrument, personal tastes and, inevitably, amount of disposable income. For some, anything above the $500 mark is needless excess, and for others, anything below $1,000 is a bargain.

Price does matter to some extent – below $200 you’re at much greater risk of running into dodgy fretwork, unplayable action and overall quality control issues. Quality electronics, the beating heart of your electric guitar, are also much harder to come by in this bracket. However between here and $1,000, there are a huge number of great electric guitars to grab that won’t break the bank and won’t break apart on stage.

In collating this list, we’ve taken into account both the actual price range of the instrument and the “bang-for-buck” factor – in terms of playability, quality-of-life features and so on.

This mid-priced doublecut is a rather striking-looking guitar, inspired by the aesthetics of a ‘60s motorcycle. Its brushed-metal hardware and vintage finishes complete the unique look that, perhaps unlike some budget guitars, don’t betray any desire for imitation. Looks aside, it’s loaded with two YGD P90s, somewhat uniquely running through a ‘Dry Switch.’ This little circuit, when activated, filters out low end to shape the pickup to be more like a traditional single-coil. It effectively acts as a coil-split, even though on these P90s, there’s only one coil.

Other specs include a set mahogany neck completing a 24.75” scale length, a rosewood fingerboard and a mahogany body. A mahogany body with a maple top also provides a nice weighty balance, both in terms of tone and ergonomics.

A bona-fide Fender for under a grand is hard to say no to. This particular model comes with a dual-humbucker layout, and while that does mean no signature Jazzmaster oversized single coils, you can split the ‘buckers with a push-pull tone pot if you want a bit more twang. And, of course, the humbuckers should play well with higher gain settings.

For some subtle chord modulations and lead wobbles, there’s a vintage-esque tremolo bridge, but other than that this guitar is a simple affair, with a master tone and master volume control and three-way pickup selector switch. While it might not be the definitive Jazzmaster experience, it’s a great low-mid-priced entry point for the world of Fender offsets.

With an extremely thin design, slick maple neck and dual Quantum humbucker loadout you’d be forgiven for thinking this is aimed squarely at shredders. And to some extent, it is, but its thin natural finish on both the body and neck and no-frills design means this guitar wouldn’t find itself out of place in any player’s collection, regardless of their penchant for sweep-picking.
A deep cutaway for the lower horn does allow easy access to all 24 frets if that is your intention, however. A string-through fixed bridge also provides some solid sustain and more precise intonation tweaking.

The S521-MOL also comes with a price tag almost as thin as its body, meaning it could be a great guitar for a beginner, or an affordable way to expand your tonal palette to include the more metal side of things.

The signature guitar for Muse frontman Matt Bellamy, this angular single-cut has been produced under licence with Cort. It’s changed from Bellamy’s previous signature models to more closely mirror the guitars Bellamy plays on stage. Yet, especially for a signature model, it’s mightily approachably-priced. The neck pickup is now a humbucker, allowing for thicker, more powerful sound as a match to the aggressive bridge pickup. There’s also a kill-pot on the top horn of the instrument, allowing for stuttering, on-off effects.

The guitar’s basswood body also lends it to a more neutral character, not particularly bass-heavy nor particularly sparkly – meaning that it’s a great guitar to run through a more idiosyncratic array of effects for some out-there tones.

These guitars, specs-wise, punch far above their price-class. The semi-hollows come in combinations of either single or doublecut, and with either a hardtail or a tremolo. All of them are loaded with two of Guild’s own HB-2 Alnico II humbuckers for some PAF-esque honk. For controls, there’s a three-way switch and individual volume and tones for each pickup. The tone knobs also allow each humbucker to be coil-split with a push-pull action.

The 22-fret thin U-profile neck sports a rosewood fretboard, and a 12” radius. The guitars notably feature many of the same design appointments as their standard-range alternatives – only for around a third of the price.

We’ve stumbled back into shred-land, and who better to approach for affordable metal machines than Jackson. While the SLX3X Soloist isn’t quite as cheap as the uber-affordable JS11 Dinky model, there’s quite a few notable upgrades when the two are compared. Notably, there’s through-neck construction for much more comfortable leads across all 24 frets, with a swooping scarf joint. It also comes with a true Floyd Rose Tremolo and matching locking nut, rather than the simpler 2-point tremolo on the Dinky.

This model also comes with gold hardware – down to the metal locking nut – lending it to look far more premium than its price would belie.

Lists for £566. Find out more at jacksonguitars.com.

This throwback guitar is built to celebrate the ‘Birth of the Strat,’ sporting the same three-single-coil loadout as the original. Whie the core instrument is inspired by the 1950s, there’s some modern player-friendly features thrown in for good measure, such as a slim C-profile neck and a comfortable 9.5”-radius fingerboard. In keeping with the ‘classic vibe’ nomenclature, there are 1950s-style headstock markings and a tinted-gloss finish on the neck, ensuring the guitar’s vintage roots aren’t forgotten.

At its price-point, the Squier Classic Vibe 50s Strat begins to approach some of the cheapest Fender options, but if that gap isn’t something you fancy crossing just yet, this is still a great instrument for the price.

Epiphone’s bold return for 2020 was something of a triumph. The sheer range of budget guitars inspired by Gibson classics impressed, well, everyone, at NAMM, and the new ‘Kalamazoo’ headstock was an added bonus. In particular, this Les Paul Special is one of the best budget guitars we’ve played in recent memory, with the combination of two authentically-voiced P90s and a solid slab of mahogany resulting in an endlessly playable rock machine. The low price does mean a few sacrifices in comparison to a vintage original – but think about the price of a true vintage ‘50s Les Paul Special. Then think about £349.

There’s a reason the Telecaster has endured over the years, and this particular iteration on it sees no particularly innovative twist on the formula. There’s no particular year of instrument it’s trying to evoke, and no change in the familiar pickup arrangement – it’s just, well, a Telecaster.

The pickups found in the Player Series guitars, according to Fender, “keep a foot in the past while looking to the future.” So expect a distinct Fender character, but with enough output to keep up with the needs of your rig.

Like its Les Paul Special sibling above, this guitar was introduced this year as part of the Inspired by Gibson range. While it’s a little more expensive, it comes with a fully-fledged Maestro trem system.

It also comes with two ProBucker humbuckers, voiced after the original PAF humbuckers found in guitars of this era. And so now that Epiphone is offering this recreation of a vintage classic, it’s a great budget acquisition for any guitarist looking for some vintage rock n’ roll.

When you think Gretsch, you might not think P90s – but for this model the brand embraces single-coils, resulting in an impressive machine indeed, as we noted in our review. The pickups here exhibit a more refined upper-end, working in the guitar’s favour, with no unpleasant harshness, especially when combined with gain. And, of course, as you can see, aesthetically it goes above and beyond when considering its price.

The EC-256 is ESP’s budget version of models in its Eclipse line. And while it’s no mystery where it draws its good looks from, don’t let that distract you from its other features. Everything about the EC-256 is decidedly modern, and can take you from blues to rock to metal, easy.

While its shape is of course very traditional – it does come with some modern features, such as a thin U-shaped neck that’s faster to play on, a flatter fretboard radius of about 14 inches, 22 extra jumbo frets, and coil-splittable humbuckers. A deeper, carved cutaway also makes reaching those higher frets easier than on a more traditional single-cutaway.

Lists for £399. Find out more at espguitars.com.

The ML1 Modern Standard is loaded with two new-and-improved humbuckers, voiced for a blend of clarity and aggression – and can be coil-tapped if you want to add in some dynamic, glassy cleans or spanky blues to your arsenal. The mahogany body provides standard solid feel and resonance, while the flamed maple veneer and body binding give the instrument a premium feel. The neck also comes with a satin finish, as opposed to the gloss found on the body, for comfortable movement around the guitar.

Lists for £449. Find out more at chapmanguitars.co.uk. 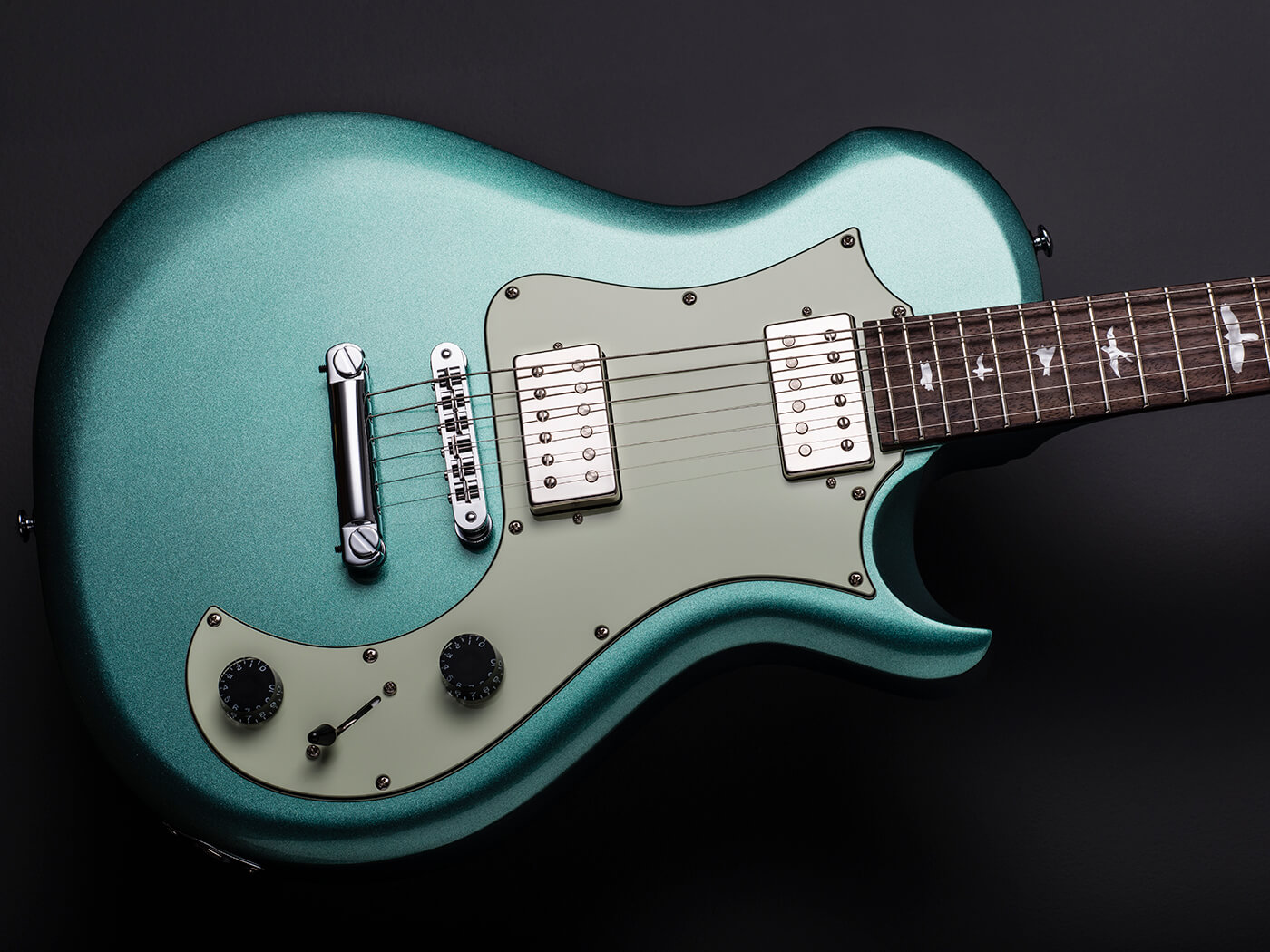 This Starla Stoptail impressed us in our review of it, showing off an expressive, twangy character that evokes tones both Fender and Gretsch, while still retaining a characteristic ‘PRS’ feel. The guitar itself is loaded with two 2x DS-02 humbuckers, each splittable via a push-pull tone pot for both single-coil quack and full vintage rock growl. On top of the versatile electronics, there’s a set mahogany neck topped with a rosewood fretboard. In all, you get an incredibly giggable axe for £599 that doesn’t feel like a compromise.

Lists for £599. Find out more at prsguitars.com.