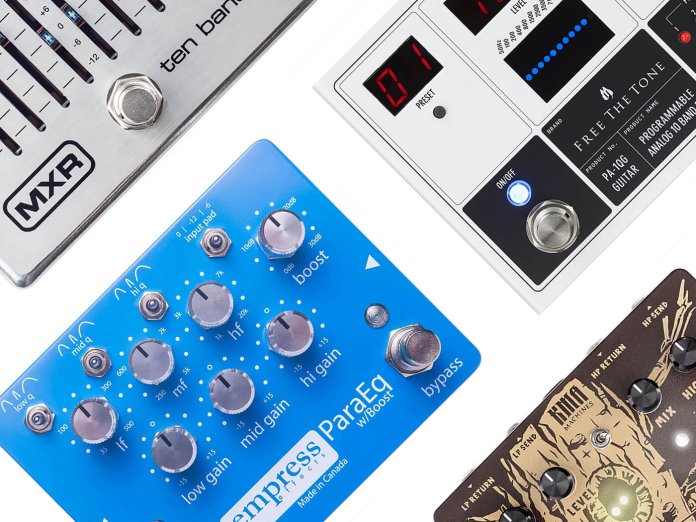 Most pedals you buy come with some sort of EQ management – anything from a simple tone knob to a set of bass, mid and treble controls. Even the most ‘transparent’ effect will have an impact on the frequencies present in your sound.

But the rabbit hole of EQ control goes far deeper than that – from broad-strokes six-band EQs to programmable parametric behemoths, these units can act as helpful ‘always-on’ units, cut your solos through a band mix or work as their own distinct effect.

EQ pedals can be broken down into two broad categories: graphic and parametric. The first is, unsurprisingly, the easier to visualise of the two – your signal’s frequency spectrum (or part of it) is broken up into a certain number of bands, each of which can then be boosted or cut with the corresponding slider. Simple enough. Non-parametric equalisers that utilise knobs instead of sliders operate in the same way, however these are less common as it’s easier to pack more bands side by side on a stompbox.

Parametric EQs similarly break things up into bands, but the precise location of where the bands fall across the spectrum can then be controlled, as can the width and shape of each band – referred to as ‘Q’. This offers an advantage over graphic EQs, which most of the time have a fixed frequency and Q for each slider.

An EQ pedal can find its place in your rig in many different ways. Got a fuzz pedal that sounds great, but can’t cut through a mix? Use an EQ to reintroduce some midrange into the situation. Bass frequencies from your amp interfering with your bandmates’ sound? Use one to cut down on rumble.

They don’t have to be used as pure problem-solvers, either – the satisfying stoner-rock crunch of Queens Of The Stone Age’s Songs For The Deaf was achieved in part by slamming the maxed-out midrange of an EQ pedal into the front of an amp. Similarly, cutting everything except one band can lead to an interesting nasal, filtered sound. There are countless situations where an EQ pedal can bring your tone to life, and the best way to find out how one can work for you is to grab one and get experimenting.

What to look for when buying an EQ pedal

By-and-large, EQ pedals offer very similar things, and so breaking down their pros and cons can seem a bit tricky at first. The main battles are fought on the grounds of quality-of-life features: separate boost switching, programmability, illuminated sliders, and so on. Form-factor is another thing to consider, especially in the case of graphic EQs. If you’re strapped for space on your board, then you might have to trade that off with the number of bands your EQ pedal has.

Another thing to consider is the frequency range of the pedal – the human range of hearing (roughly) spans 20Hz to 20kHz, but the main work being done by a guitar signal seldom fills out every part of that. 100Hz is generally the bassiest frequency you’ll have to worry about, although there are exceptions. Similarly, control of frequencies above 16kHz is less common in the world of guitar EQ.

The 10 best EQ pedals at a glance…

With separate level and gain controls, and of course a wide range of 10 frequencies to manipulate, the MXR 10-Band EQ offers everything you could want out of an EQ pedal. The pedal’s boost/cut range extends out by 12dB, more than enough to have a noticeable impact on your sound. There’s also separate volume and gain controls, perfect if you want to switch the pedal on for a soaring lead boost. Dual outputs and illuminated sliders are a nice touch too.

Empress’ ParaEQ is perhaps the most extensive parametric EQ you’ll find in a pedal format. It offers three bands: low, between 35 and 500Hz, mid, between 250 and 5kHz, and high, between 1K and 20kHz. Each has an independent Q control, with three shapes to choose from, as well as +/-15dB of manipulation. You could use the broadest Q settings to get the pedal to act as a boost, but since Empress was kind enough to already include a separately-switchable 30dB clean boost, the EQ section is free to act on exactly the frequencies you need it to.

It’s been around since the 1980s, and not without reason. It’s seven bands focus on the low-midrange, offering control between 100Hz and 6.4kHz. While the high-end control isn’t as precise as pedals that go all the way up to 20kHz, the range on offer is voiced more towards the core components of a guitar’s outputs, rather than across the entire spectrum of human hearing. Each band has a sizable 15dB of boost or cut, and an independent level control makes use as a solo boost that much easier, too.

+ Programmable, with presets
+ Other useful features thrown in
– Overkill for some simpler rigs

The Source Audio EQ2 offers a number of high-tech features, combining aspects of parametric and graphic EQs. While control is split into 10 bands, each can be widened or narrowed for either broad strokes or accurate fixes. There’s also shelving options for even further shaping, and every band has 18dB of boost or cut.

The EQ2 isn’t just a set of illuminated virtual sliders, either. It’s programmable, with eight accessible with just the unit, and a further 128 can be accessed with an external midi controller.

Far from just offering EQ control, the EQ2 also offers a noise gate, a dynamic limiter, a tuner and some stereo signal routing options that include: mono to stereo, stereo to stereo; and the ability to split signals and run each one through a separate EQ preset.

The Wampler EQuator is semi-parametric, with two controls for everyone’s favourite bandwidth area: the midrange. Bass and treble’s frequency locations are fixed to keep things simple.

In terms of the two midrange controls, Mids 1 has a narrow Q, while Mids 2 has a wider Q – so both notch adjustments and broad midrange boosts are catered for. Mids 1 can vary between 238Hz to 5kHz, boosting or cutting by 15dB while Mids 2 can range from 480Hz to 4.8kHz and boost or cut by a whopping 25dB.

A buffer can be an essential part of your board, mitigating the treble loss that comes with long cable length and/or large numbers of true-bypass pedals before your amp. Old Blood Noise Endeavours combine an always-on high-quality buffer with a switchable three-band EQ, meaning two utility pedals combined into one.

While only three sliders won’t offer extreme control over narrow frequency bands, the pedal can still let you rejuvenate your signal after overdrive or fuzz, or give it more character before it runs into a flatter preamp section.

The Graphic G is no departure from Mooer’s focus on budget, compact pedals. Its small footprint means there’s only five bands here, ranging from 100Hz to 4kHz. There is an overall level control, too, but that’s just about it – no extra features here. But given the size of the pedal and its impact on your wallet, it might be a handy addition to your ‘board.

The six bands that the GE601 offers cover a slightly smaller range than some pedals, going from 100Hz to 3.2kHz – which isn’t inherently bad, as it means a more precise set of slices out of the frequency spectrum. The GE601 also features buffered, JFET bypass switching with a low impedance output, meaning it plays well with long cable lengths or other effect units without loss of treble clarity. There is only 12dB of boost/cut on tap for each frequency band, meaning that it’s less suited to extreme adjustments.

This is an entirely different approach to an EQ pedal than the others on this list, but some of the same principles are at work. Your signal is split into two paths – one of which goes through a high-pass filter, and the other through a low-pass filter, each with a variable cutoff. Both filters can then be run through separate effects loops, and then recombined to your liking, depending on the setting of the mix knob. This has endless potential applications, such as creating a thunderous low-end run through four Sovtek Big Muffs, while your high-end chord definition is provided by a low-gain Klon. There are probably more sensible uses, because as anyone who’s used high- and low-pass filters knows, they can be incredibly powerful for shaping a sound.

When a single EQ pedal costs more than some guitars – it’s likely going to have some tricks up its sleeve. The bands on offer here range from 50Hz to 10kHz, with an illuminated display to let you know what’s going on. Four presets can be recalled using the on-board footswitch (and this includes the level control, perfect for switching into a solo from an ‘always-on’ eq sound), while 99 are accessible with MIDI. And don’t let the digital look fool you – the signal path here is 100 percent analogue, with digital circuitry only being used to control the parameters.