Here's a guide to ensure you get more twang for your buck. 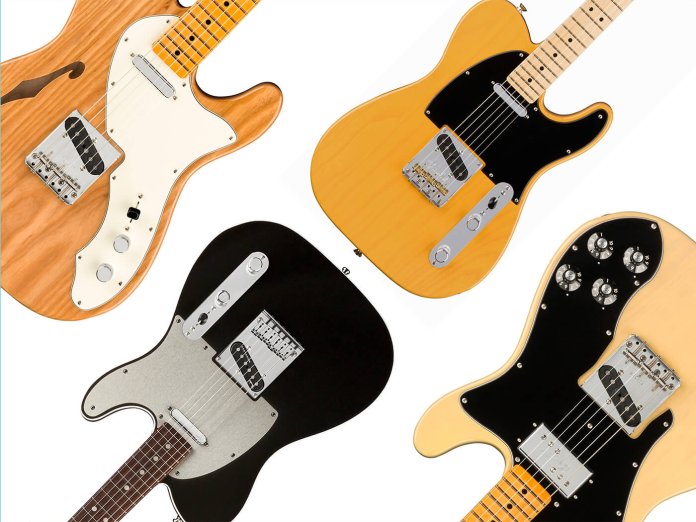 Maybe it’s the elegant simplicity of Leo Fender’s first electric-guitar design, but in the seven decades since the Telecaster arrived on the scene, it’s proved to be a remarkably versatile and varied beast. Here’s a rundown of some of the various Telecaster models you’ll find in the current Fender range:

This ash semi-hollow is a serious callback to the thinline Teles of the 60s, with every nook and cranny – down to the nitrocellulose finish – period-accurate to a tee. It comes loaded with a set of Tim Shaw’s ‘60 Thinline single-coils that provide no shortage of vintage-voiced warm tones.

The Deluxe is another iconic twist on the classic Tele recipe, its twin humbuckers being a favourite of players wanting some extra grunt since the late 1960s. This latest version from the American Professional range swaps the traditional Wide Range humbuckers for Tim Shaw’s ShawBucker design. Check out our review of its cousin in the American Professional series here.

The MIM Player range is the most affordable Fender series, and the Telecaster is one of the best models in the line-up. Its appearance is another pragmatic mixture of eras, while the six bent-steel bridge saddles mean the overall look is reminiscent of the recently superseded American Standard Telecaster. Tone-wise, its vocal and expressive neck pickup instantly impresses, and the other two pickup selector positions elicit the same response. It’s clear but not brittle and delivers a range of classic Telecaster tones with pleasing jangle, snap and snarl.

Representing Fender’s very top echelon, the American Ultra Telecaster puts forth some of the brand’s most forward thinking features, including a unique Modern D neck profile, Ultra Noiseless Vintage pickups, and its S-1 switching system, which allows pickups to be routed in series or parallel – truly, a world of tonal possibilities to be found with this advanced telecaster.

The legendary Broadcaster which catapulted Fender into the electric guitar mainstream has made its return in this 70th anniversary edition. Laboured over by Fender’s Custom Shop to stay as close to the original as possible – this guitar equips alnico-III single-coils, vintage wiring, and the Broadcasters unique pickup blend control – which replaces the more conventional tone knob.

The Baja Tele has become something of a modern classic. Designed by Custom Shop Master Builder Chris Fleming, the Baja’s traditional Tele looks belie its extra versatility under the hood. With four-way switching (including series) and an S-1 switch, it offers a huge amount of tonal options from the classic Tele pickup layout.

Fender’s American Professional Telecaster is a true-blue workhorse guitar that emphasises on playability. Its ash wood body is paired to a Modern Deep C maple neck that stays comfortable to play over long periods. This well-mannered beast comes loaded with two Tim Shaw designed V-mod single-coils that pack a vintage sounding punch, while remaining balanced throughout all positions.

Straight from the home of country music, the Nashville Telecaster is a Music Row sessioneer’s dream. Thanks to its combination of Vintage Noiseless Tele bridge and neck pickups flanking a Strat middle pickup, the Nashville Tele offers a mix of Strat and Tele voices and a five-way switching system.

For players in search of a tele with meatier tone options on the fly, the Original 70s Telecaster might be right for you. It pairs a vintage-style bridge single coil with a Tim Shaw Authentic Wide-Range Humbucker in the neck – which when used together delivers the kind of thick rhythm tone that even Keith Richards might approve of.

Is it an acoustic? Is it a Telecaster? In truth, the all-new Acoustasonic is a bit of both. With hugely impressive modelled acoustic sounds onboard and a full-throated Tele bridge pickup in the mix, the ability to blend acoustic and electric sounds to create something genuinely new and interesting is a revelation.

A signature model for one of the greatest Telecaster players of all time (read our interview on p66), the James Burton Telecaster is just as versatile as you’d expect for a session legend, with three custom James Burton pickups and S-1 switching. And the Paisley Flames finish is very fitting for a man who invented chicken pickin’

How do you make your Custom even more fun than its four-control, humbucker/single-coil configuration is already? Well, you bolt on a Bigsby vibrato, of course. The Bigsby is a quirky adornment to the Tele recipe, and this model, with its natural finish, is pure 70s class.

Fender Japan has put out more than a handful of striking takes on the American classics, and the Daybreak Telecaster is no exception. This guitar emanates true Tele spirit both in looks and sound – packing vintage spec’d single coil pickups, hardware and a gorgeous pairing of an Olympic White finish to gold hardware throughout.

Do you want a bit of offset in your Tele gumbo? Well, this special-run design might be everything you ever wanted. Taking the familiar Tele single-cut outline, the engine of this curious mash-up is pure Jazzmaster, with a floating vibrato and Jazzmaster single coils. Mercifully, however, the switching is kept nice and simple – as a Tele should be.

Hard-rocking virtuoso Richie Kotzen has long used a Telecaster in the service of his musical endeavours, and his signature-model is perfect for those who want a Tele with a bit of a plush vibe. With bound flamed-maple top, DiMarzio pickups and gold hardware, this is certainly one for the well-heeled rocker.

The Vintera 50s telecaster harkens back to “Fender’s golden era”, and incorporates period-correct appointments that include a fat U shaped neck, vintage style string-thru bridge, and a set of Tim Shaw designed 50s-style single-coils. Most importantly, it’ll only set you back a fraction of an original.

Learn more about the history of the Telecaster here.