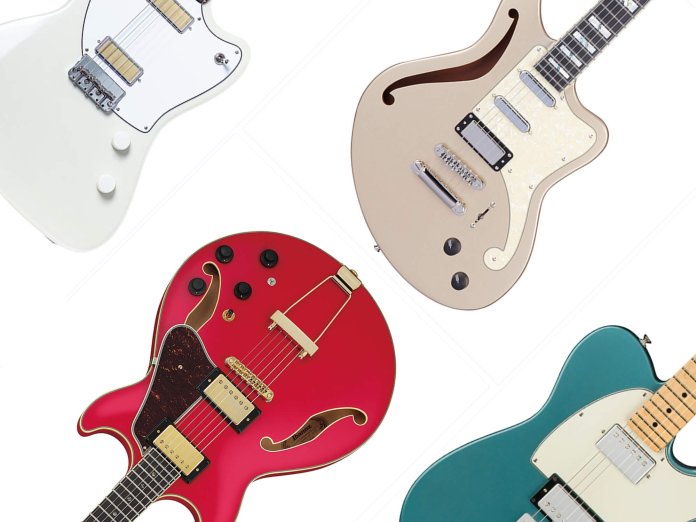 Looking for a new axe to make some neo soul? Well, there are lots of great options – let’s dive into 10.

What makes a guitar good for neo soul?

Neo soul guitar tones are most often clean and articulate, with a focus on clarity – so those beautifully complex chord voicings really sing – rather than power. The key takeaway is to look for a guitar that can convey harmonies well.

There are no hard and fast rules, but in this guide, we’ll be looking at more models in the single-coil domain. Thanks to their lower output and brighter sound, these are ideal for ringing out spectacular chords and pushing biting melodies.

When humbuckers do appear, they’re more often voiced more on the vintage end of the spectrum, with mellow brightness from the bridge pickup and warm woodiness from the neck pickup. Super high-output pickups are more likely to present problems for the rest of the signal chain, and that’s because t’s easier to get sparkling cleans when your pickups aren’t hammering the front of your pedals or amplifier.

When overdrive is heard in neo-soul, it’s more often a light crunch than a blistering high-gain fusion tone. Having a pickup with a restrained sound will help the audience focus on the playing better than a muddy, distorted tone.

Outside of the electronics, it’s much more down to what your playing style requires: some neo soul players make use of the vibrato bar a lot for articulation, while others prefer a hard-tail bridge. Modern, ergonomic touches such as all-access neck heels, flatter fretboard radii and so on are also going to be more common on this list than vintage-correct specs – just because of the sheer amount of fretboard acrobatics neo soul requires. 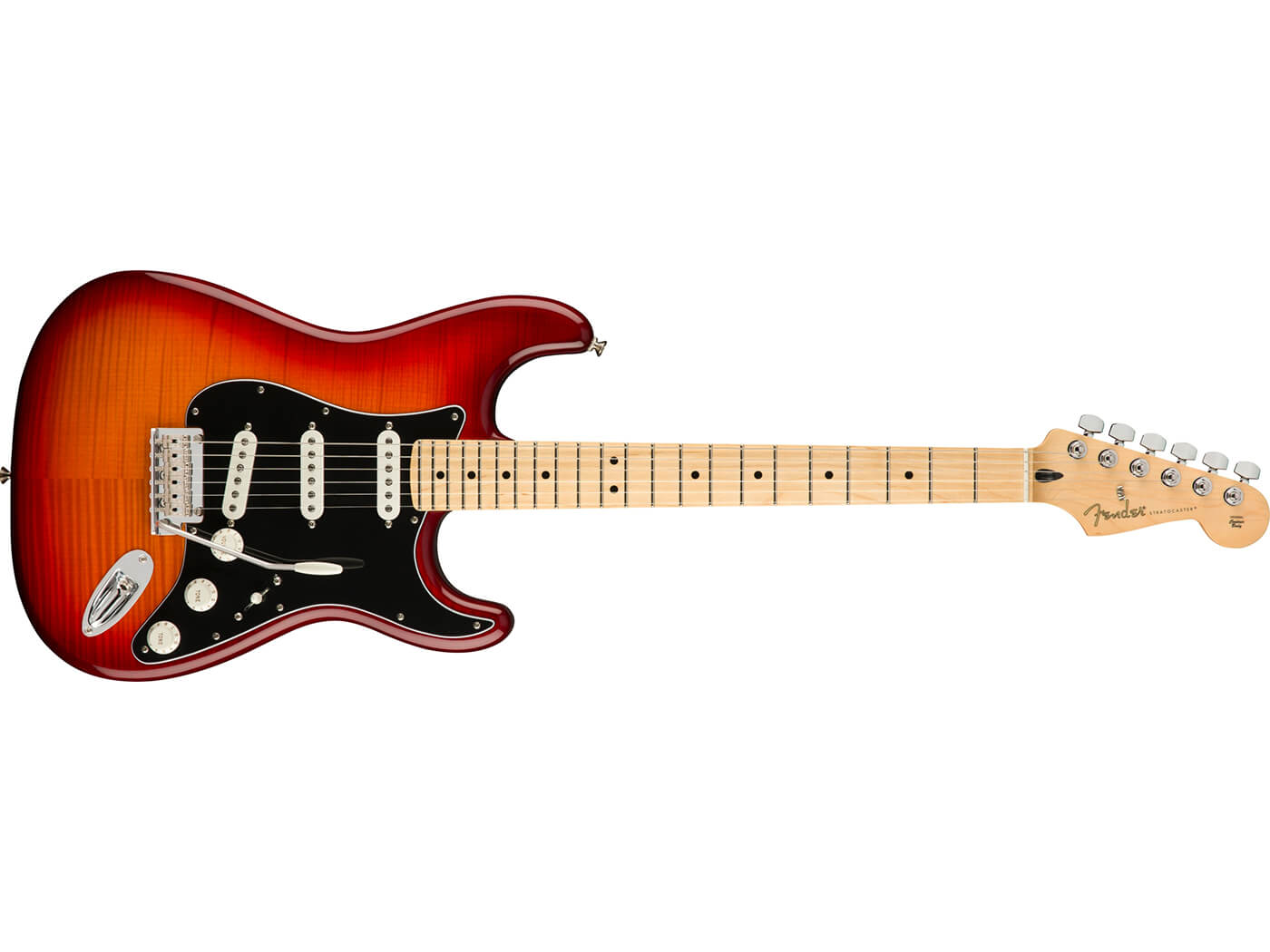 Fender’s Player Plus range is all about modernising classic designs. Here, that manifests as a trio of noiseless single-coil Strat pickups, offering clean tones that are extra, well, clean – no hum, even with compression or overdrive.

The secondary mode, offered by a push-pull knob, adds the neck pickup to switch positions one and two, giving you two more sounds not usually found on a Strat – the neck pickup’s deeper tone combined with the brighter bridge or middle position certainly helps to keep things sounding full and articulate.

In terms of the playing experience, the neck carve is consistently slim and comfy, with rolled fretboard edges to present minimal interference with your hands. The fretboard is also carved to a relatively flat 12-inch radius, meaning playing all the way up the ‘board is a breeze. The modern two-point vibrato and locking tuners are a nice touch too, helping keep things stable throughout the most judicious of wobbling. 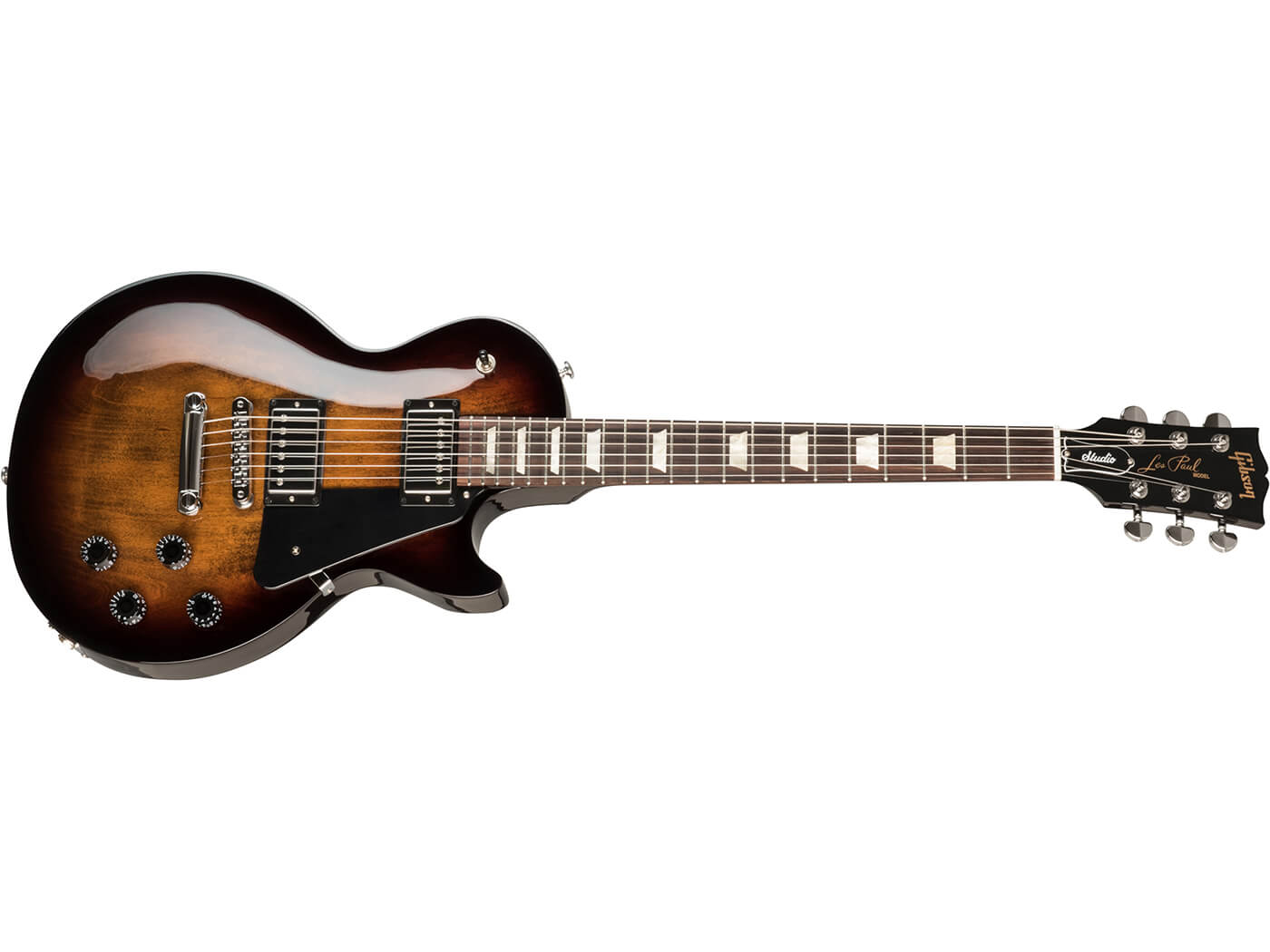 The Les Paul Studio might be an appealing option for the no-nonsense player: coming in a trio of understated finishes, the Les Paul studio’s take on the classic dual-humbucker single-cut design removes basically all extraneous touches and leaves only what’s needed.

The Les Paul Studio’s humbuckers are voiced after the famously restrained PAF pickups, however, they’ve got a little more upper-midrange bite that works really well with clean sounds There are also push-pull volume pots that let you split the two pickups, giving you easy access to single-coil sounds and massively expanding your tonal palette.

Construction notably includes a weight-relieved body, which is a big plus if you’re not a fan of the traditional Les Paul’s rather hefty mass. While a lot of guitars on this list feature a 25.5-inch scale for a snappy tone, the looser feel offered by the 24.75-inch scale could be put to good use depending on your approach. 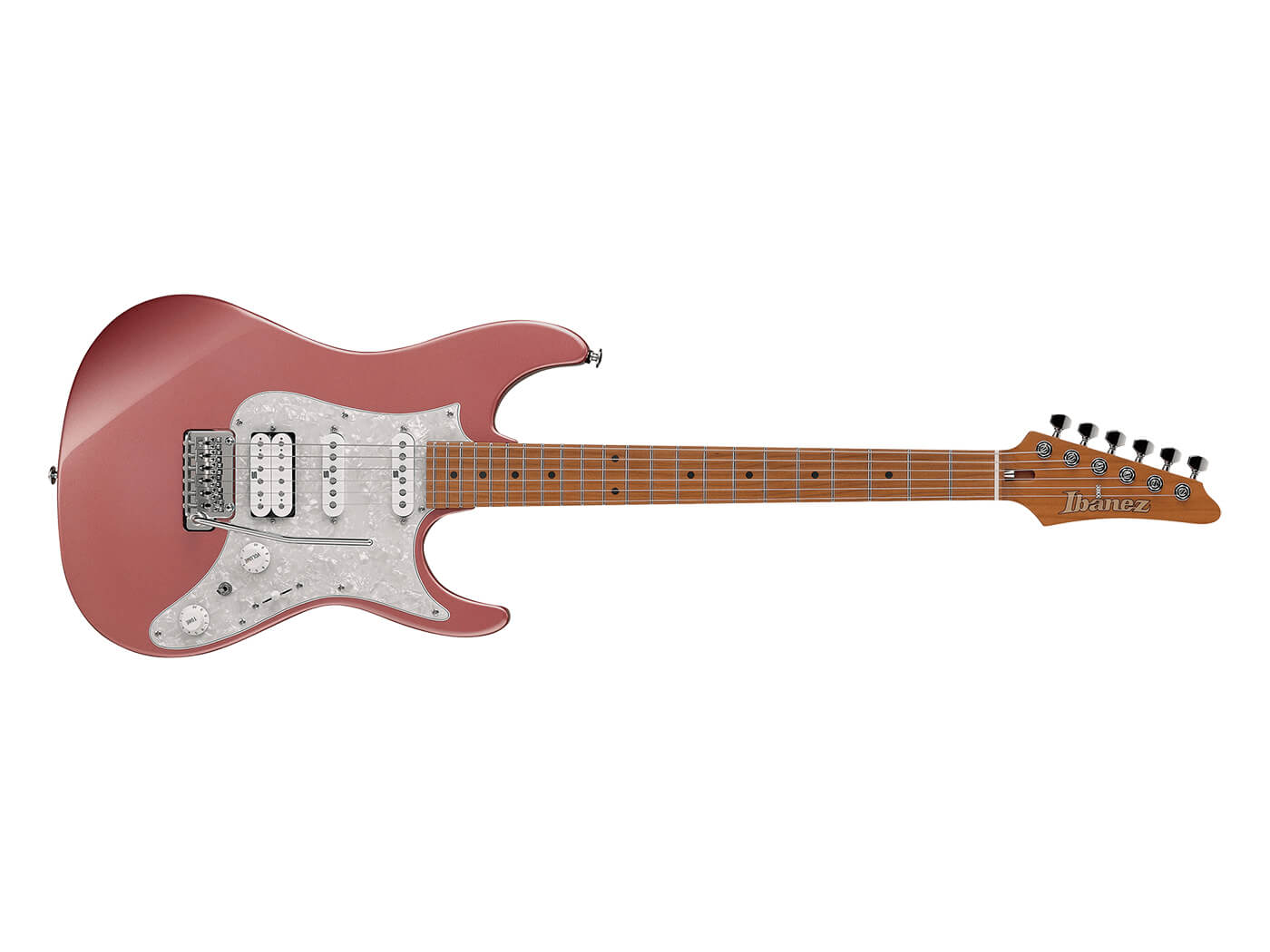 + Sleek, speedy playability
+ Gorgeous aesthetics
– Superfast S-type look might not be for you

The AZ-2204-HRM’s combination of the sleek, thin design approach Ibanez is known for, and the more vintage take on the S-type make this an excellent choice for neo soul. This isn’t a metal-focused shredder, but the generous heel carve, the 22 jumbo frets and the relatively-flat 12-inch radius make this a fast-playing dream.

The Hyperion pickups from Seymour Duncan cover a lot of ground, too, and you can shake things up with the Alter switch, which engages secondary tones for every pickup, offering a total of nine switch positions. While you could get through a full set without having the same tone on two songs, it really means that you can achieve some really interesting clean tones thanks to the non-standard switching. 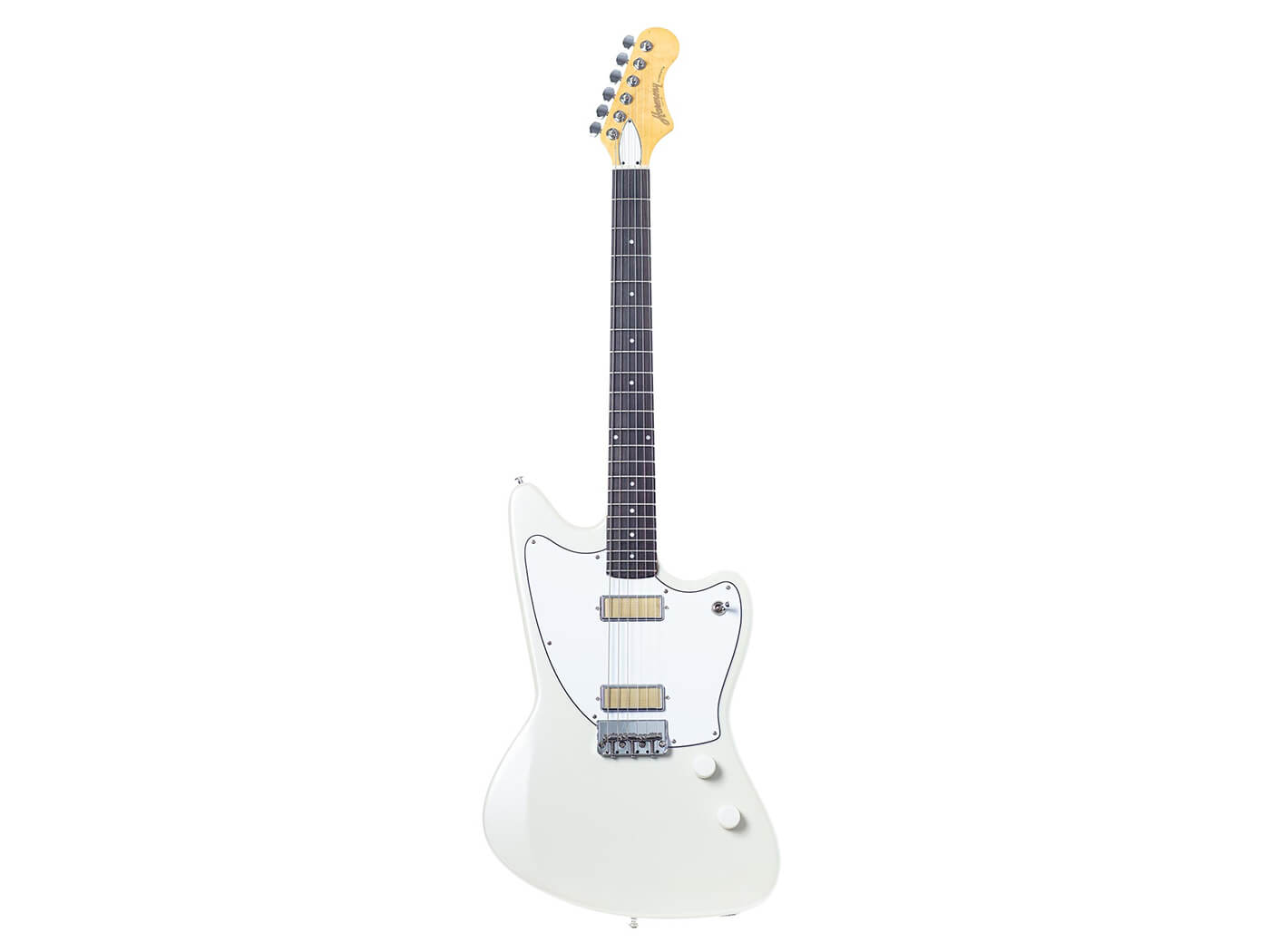 The Harmony Silhouette, despite its slightly offset looks, has a little more in common with a traditional T-type than with something like a Jazzmaster, thanks to its two pickups and three-saddle bridge.

All three pickup positions offer plenty of spank. In pure EQ terms, this is a very trebly guitar, but that doesn’t mean it’s shrill – there’s a snappiness to clean tones, especially when digging in on chords, that has the character of a compressor without the need for any pedals. The pickups here are actually mini-humbuckers, which have their own very unique tonality thanks to their smaller footprint along the length of the string.

The snappiness of the pickups, along with the rock-solid hardware and sleek neck profile, make this a great choice for neo soul – complex chord voicings will have no trouble standing out. If you do need some wobble, Harmony also offers a version fitted with a Bigsby. 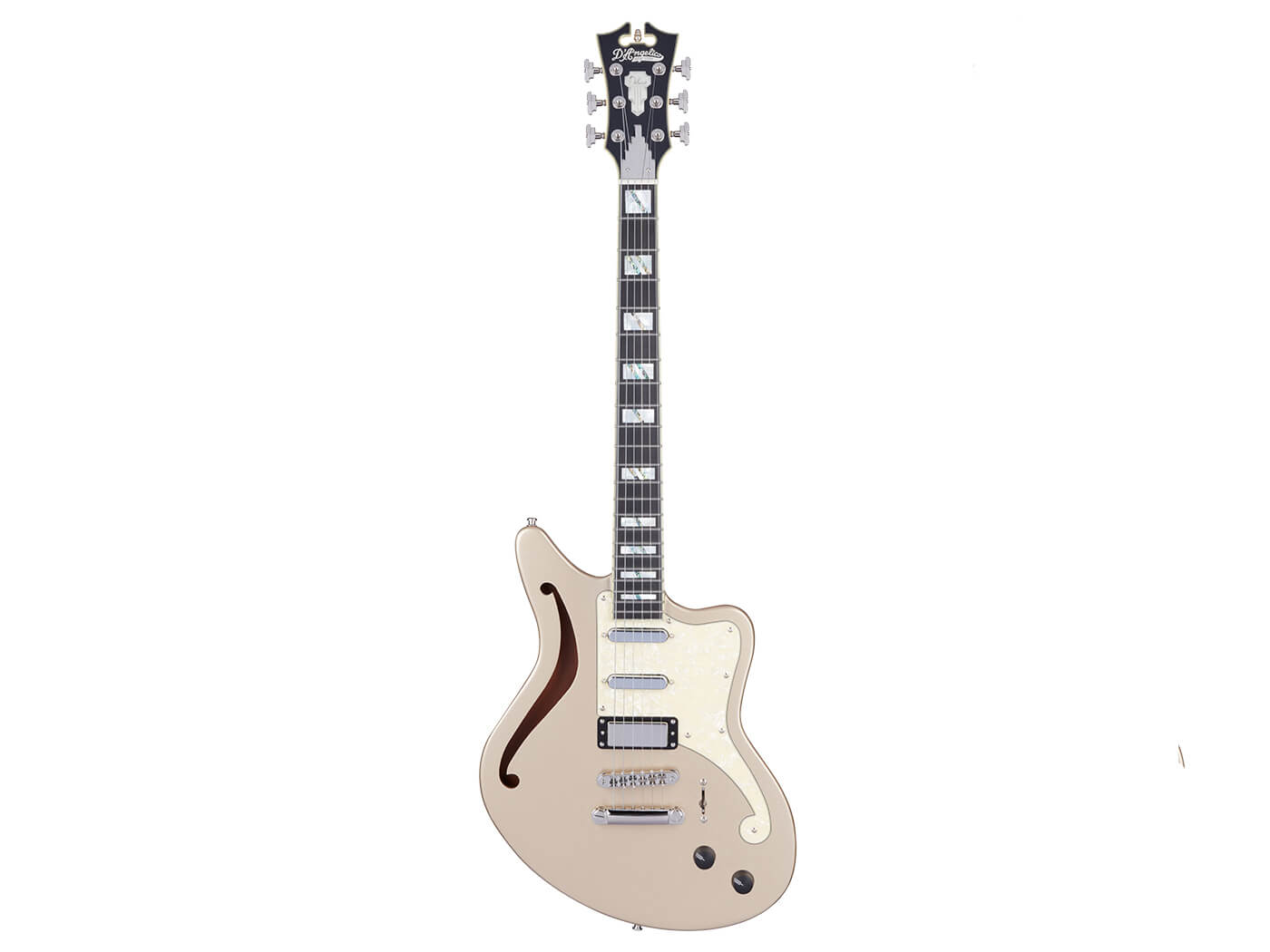 This guitar doesn’t just look the part, but it’s also primed for neo soul playing. The small, semi-hollow body offers plenty of chime to its sound, without being boomy or uncontrollably resonant. The HSS arrangement is also handy, offering a wide selection of sounds. The mini-humbucker in the bridge, a little like the Silhouette’s, gives you plenty of snap, rather than risking overwhelming the sound with a full humbucker’s heftier bass response.

This snappy sound is helped by the slightly semi-hollow construction, which is only chambered on one side of the guitar. The bridge options here also can be tailored to suit your needs – it comes either with a Gibson-style two-piece hardtail, or with a Wilkinson vintage Stratocaster-style vibrato. 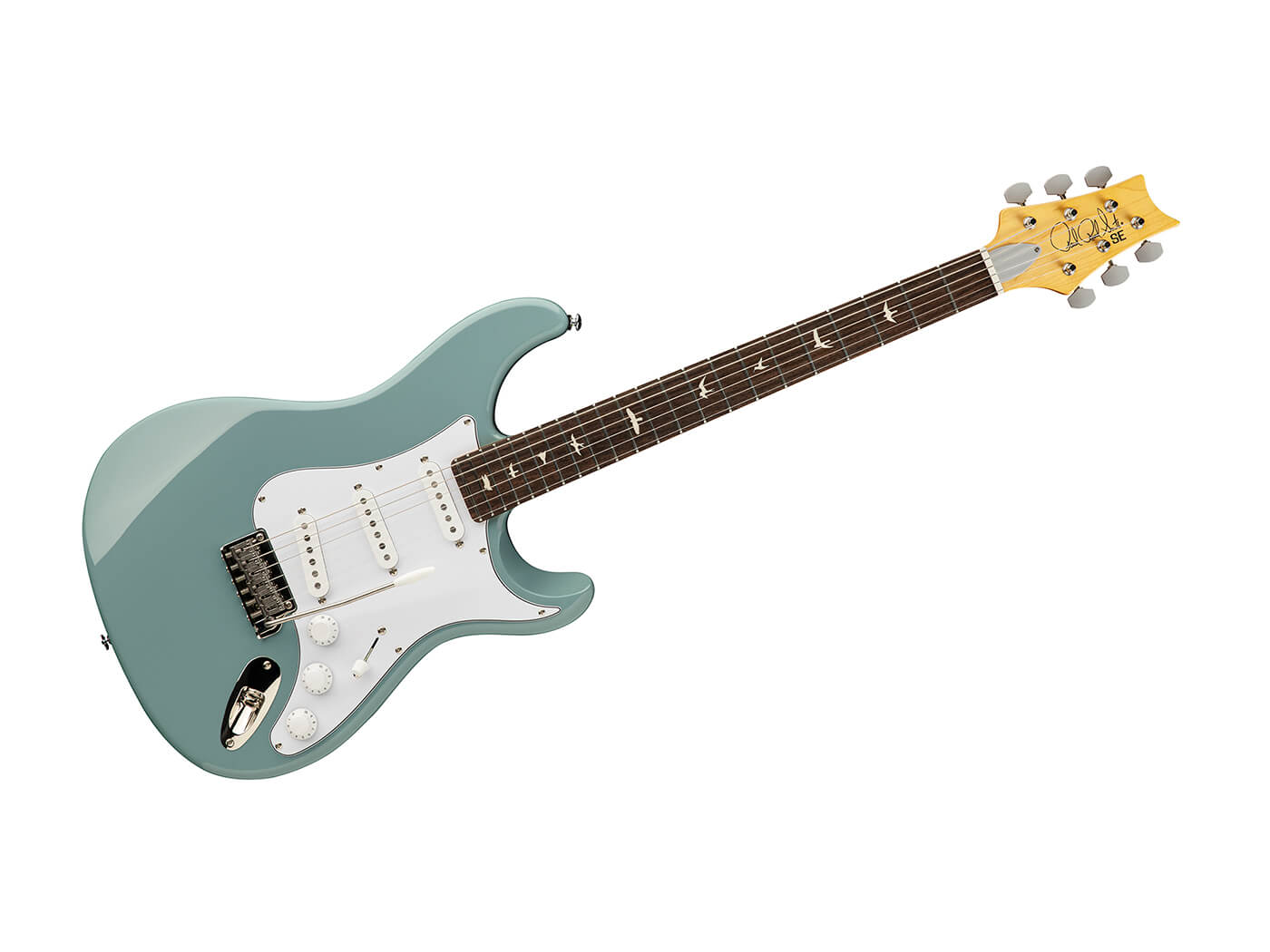 John Mayer’s Strat-inspired PRS Signature model caused a stir when it was released, and another even bigger stir when the affordable SE version was announced. The SE Silver Sky still delivers on the nuanced take on the S-type as the original: a refined guitar that wears its inspiration on its sleeve, but still offers a fresh experience. The neck is notably an excellent-feeling one, with a rather unique 8.5-inch radius fretboard that splits the difference between the rounded, vintage feel of a 7.25-inch early Strat and a more modern ‘board.

Pickups are also excellent, voiced for plenty of articulate sparkle on the cleans. The dedicated bridge tone control is a nice touch, too, letting you tame the ice-pick attack that can occur with a single-coil in the bridge position. 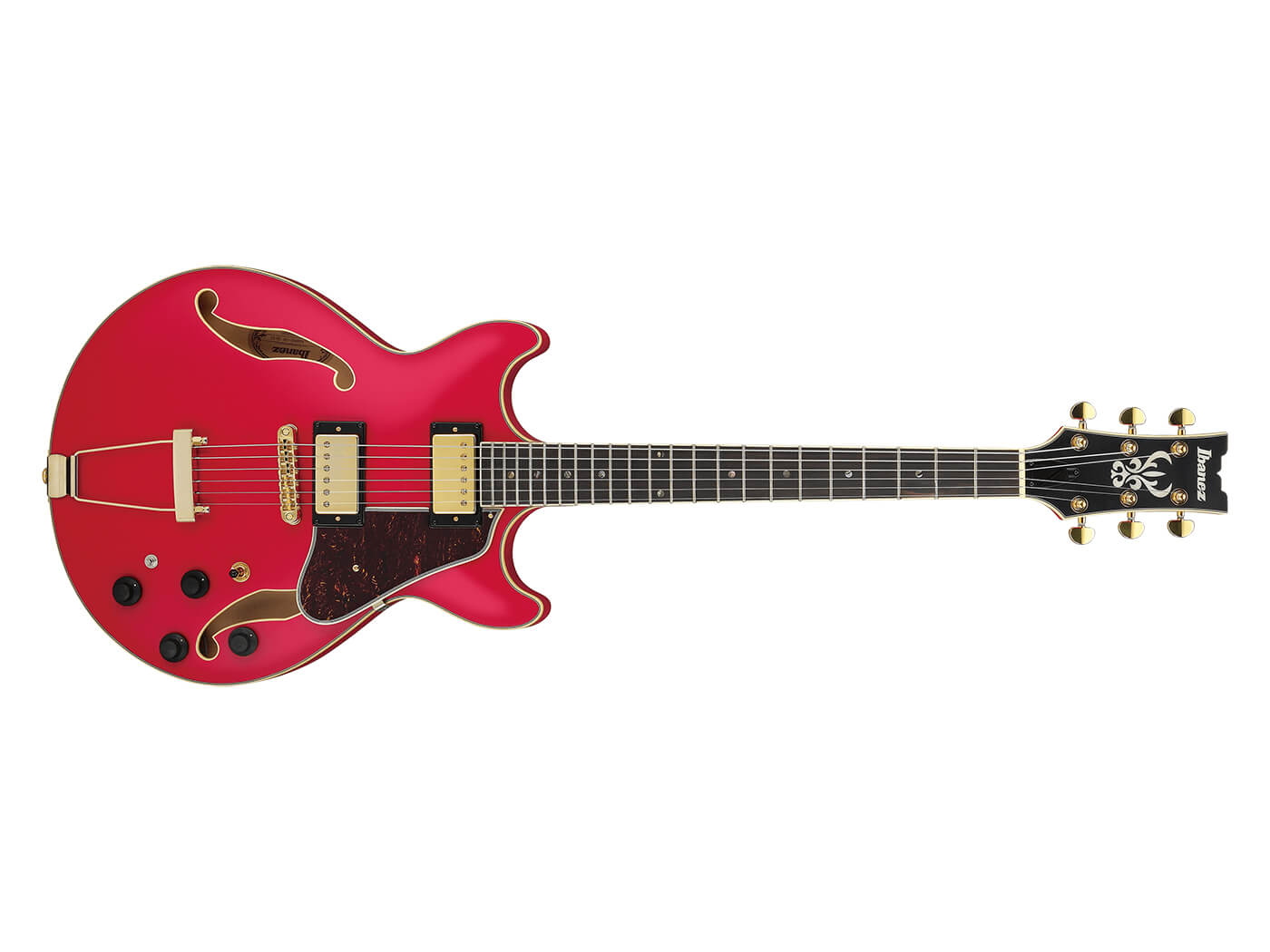 This absolutely gorgeous guitar is Ibanez’s take on the double-cut hollowbody. It certainly looks the part, and comes loaded with some high-end specs despite its affordable price tag.

While it can absolutely nail traditional jazz tones, it still has some tricks up its sleeve: mainly, the Tri-Sound switch, which operates on the neck pickup only. This small toggle switch gives you three different pickup voicings for the neck pickup, meaning it doesn’t all have to be warm jazz if you don’t want it to be – you can split the coils or run them in parallel for two extra tonal options. The pickups themselves are Ibanez Super 58s – the same favoured by George Benson, Pat Metheny and John Scofield on their signature models.

Despite the fully-hollow construction, this definitely isn’t an old-school, full-size jazz box, with the slimmer body and neck offering an agile playing experience for the modern player. 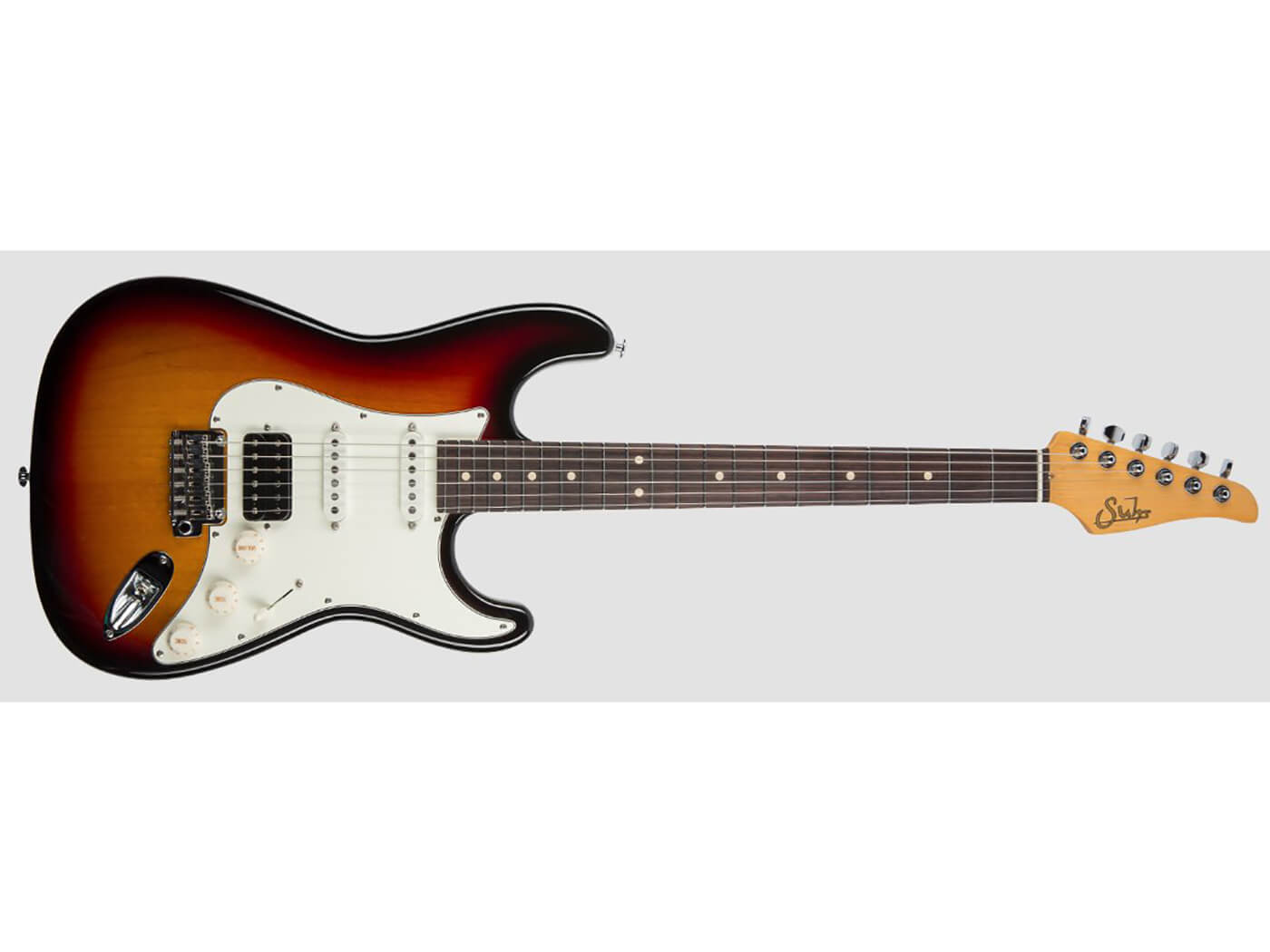 + Classic looks with modern specs
+ Lots of ergonomic touches.
– Pickups might be too vintage-voiced for some

Suhr’s Classic S inspiration is work proudly on its sleeve, but given that the shape is one of the most common on the market it’s no surprise that Suhr brings its own twists and modernisations to the format. The Gotoh 510 bridge splits the difference between the performance of a double-locking vibrato like a Floyd Rose and a more traditional Stratocaster vibrato, while the dramatically contoured heel makes playing in the upper register a breeze.

Depending on your preferences, the guitar is available in HSS and SSS configurations. The single-coils here are Suhr’s own V60LPs, and the humbucker is a Suhr SSV. Both the V60LPs and the SSVs are renowned for their dynamic, lively take on the sounds of vintage pickups: perfect for articulate cleans and warm, singing drive sounds. 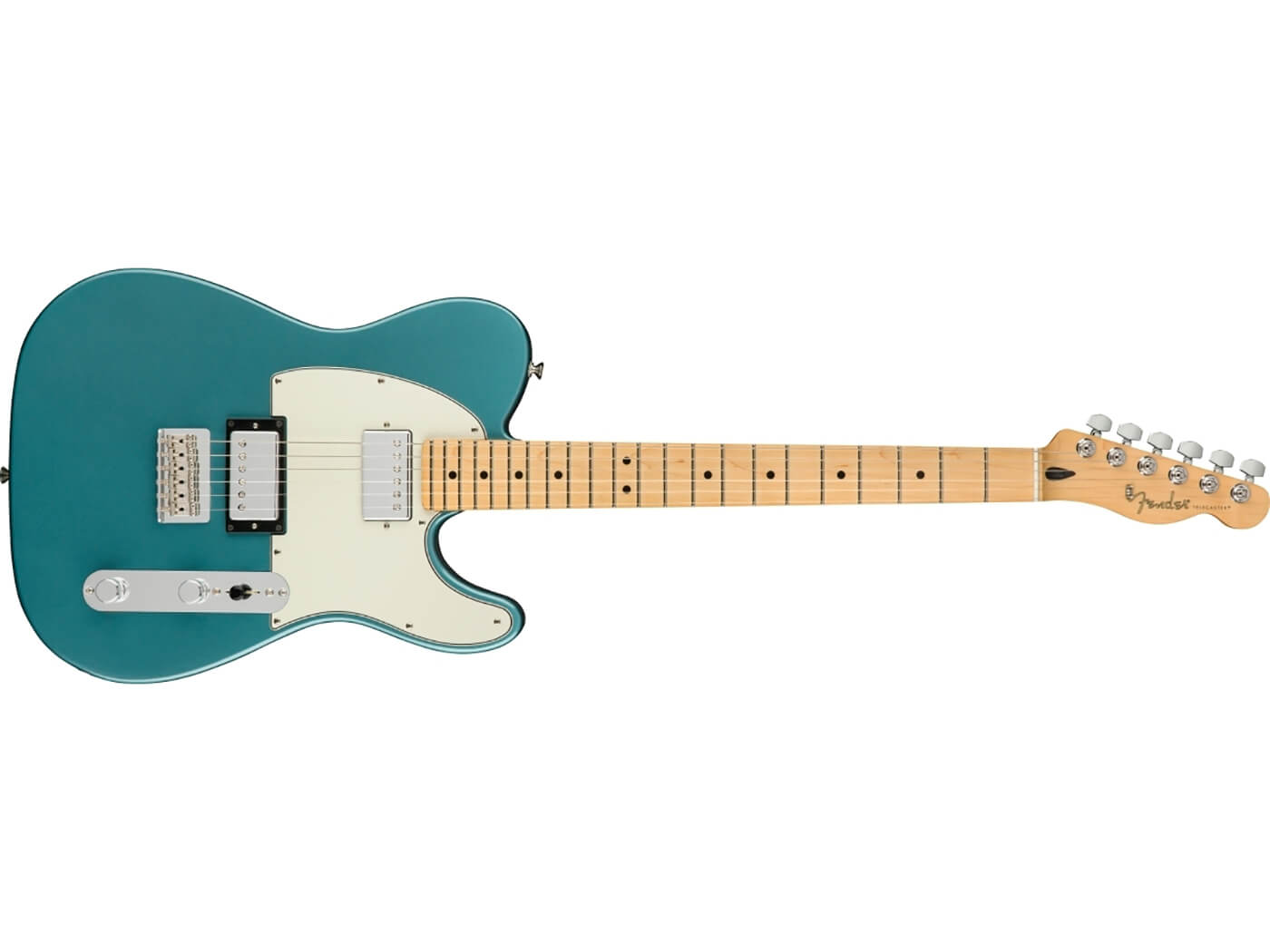 + Timeless Telecaster design
+ Affordable
– Might be too “simple” for some

While not as overtly modern as the Player Plus Telecaster offerings, the standard Player Telecaster keeps things stripped-back yet not overly vintage. There’s a six-saddle bridge with block steel saddles, as well as a modern ‘C’ carve for the neck, making it a breeze to play.

The fretboard isn’t quite as flat as the Player Plus’ 12 inches, instead measuring in at 9.5 inches. Most important for this list however are the pickups – a pair of Player Series Alnico VTelecaster pickups, which have a slightly softer voicing than the most modern single-coils on this list, but are by no means underpowered.

The rest of the guitar is standard Telecaster fare: and there’s a reason the design’s stuck around since the 1950s. Despite its simplicity, there’s basically nothing a good Tele can’t do. Well, maybe dive-bombs – but they aren’t particularly common in neo soul. 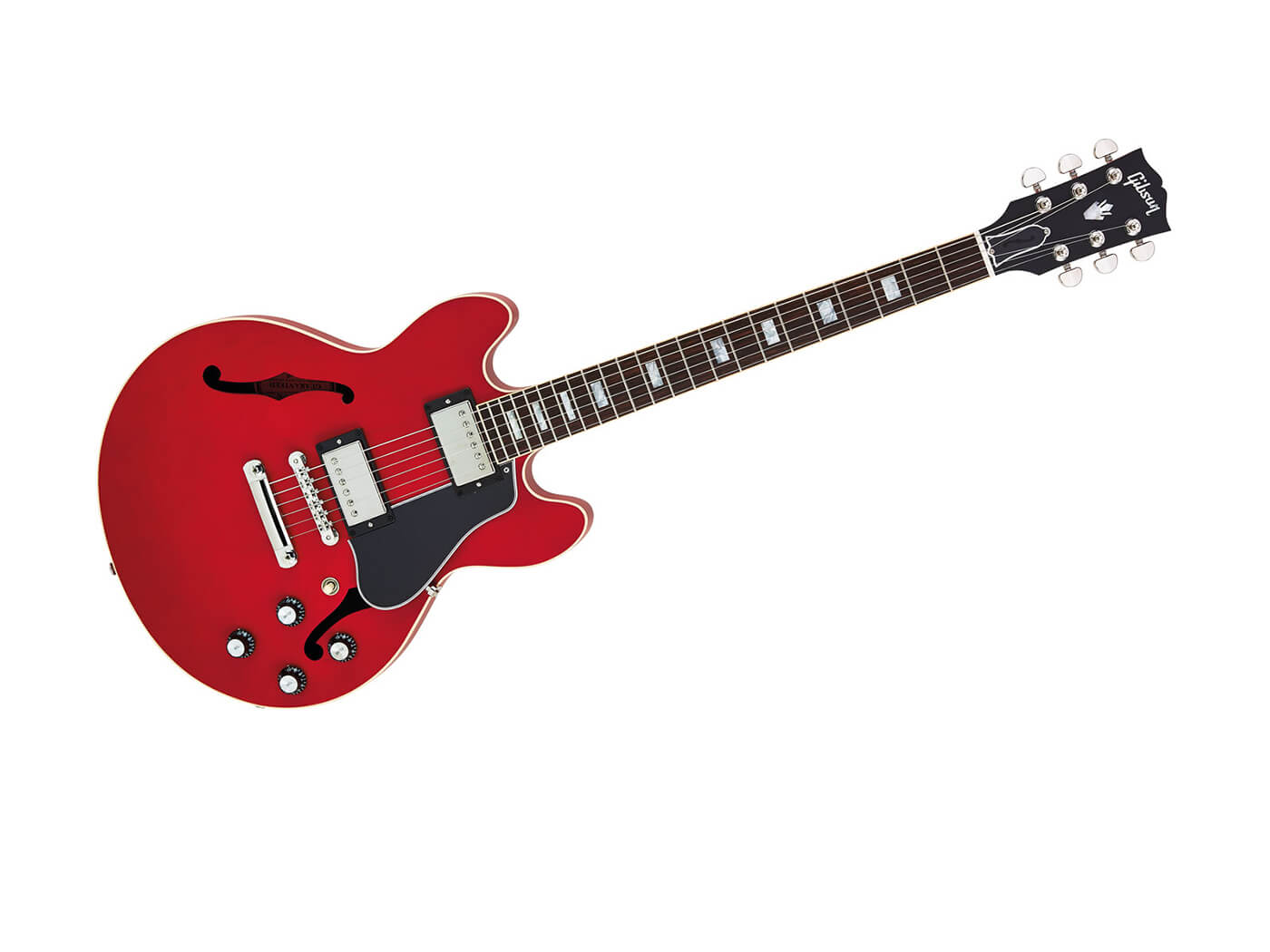 If the other semi-hollows on this list have been a little too modern, then perhaps Gibson’s ES-339 is the one for you. While it’s traditionally-styled., the smaller body makes it a little more suited to the sounds of neo soul rather than bassy jazz lead playing, or infinitely-sustaining rock ‘n’ roll feedback.

It’s fitted with a pair of 57 Classic humbuckers, and while they can’t be coil-split, their low output and articulate voicing will keep things sounding punchy and clear for your clean tones. The semi-hollow construction as ever is a good combination with a lower-gain sound,

Like its Les Paul sibling, the ES-339 has a relatively short 24.75-inch scale: whether this is a positive, a negative or completely neutral is up to you.