Expand your tonal palette with these great synth stompers. 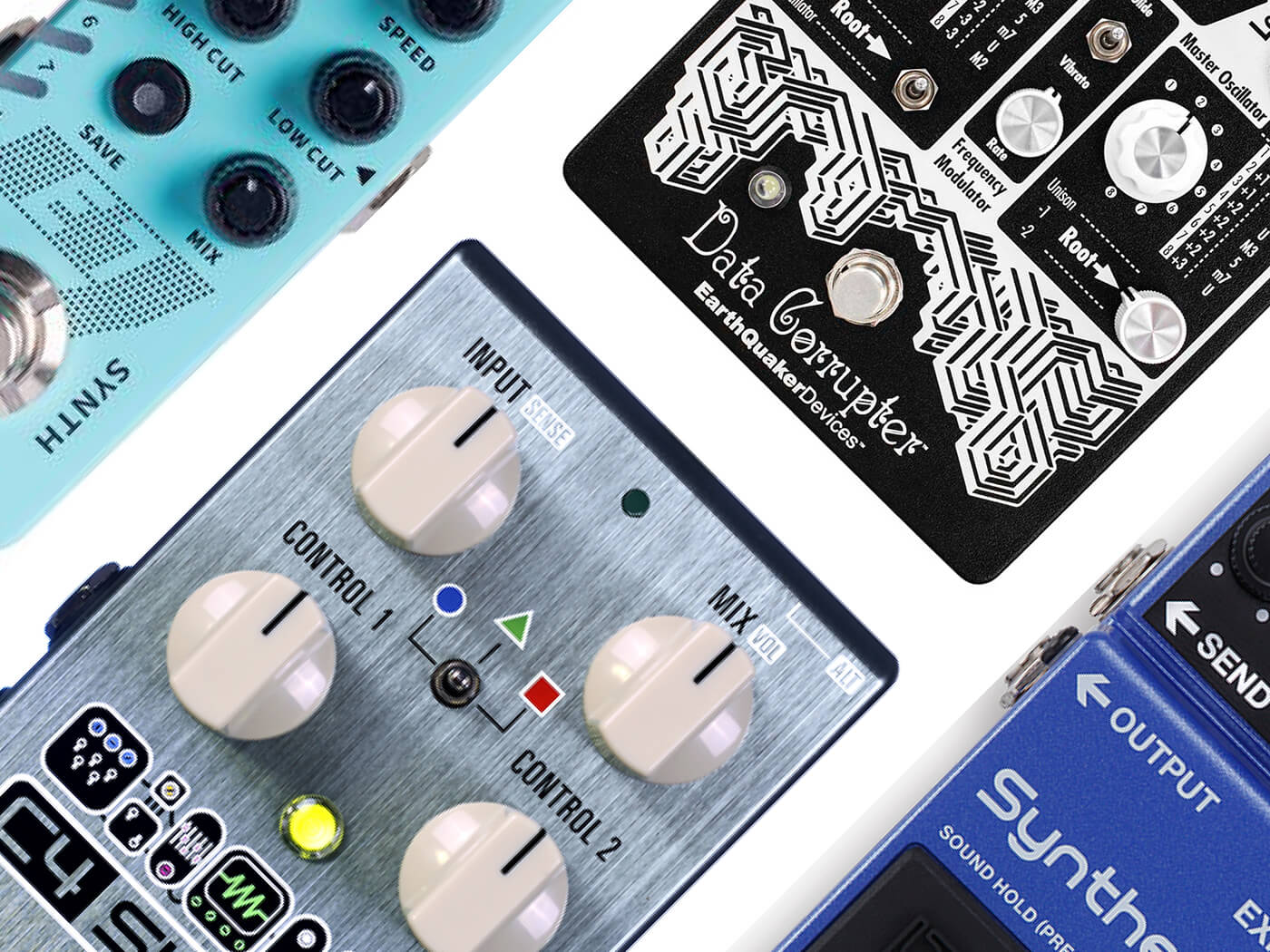 Synth pedals come in all shapes and sizes – varying from monophonic squarewave generators to small computers with footswitches. Here’s our top picks, from ethereal ambience to fuzzed-out analogue chaos.

EHX’s take on the multi-voiced synth pedal has nine sounds packed into its moderately-sized enclosure. Each one is vastly different from the last, with the two control knobs affecting different things with for synth. They do anything from blending in different octaves, or increasing the sound’s attack speed – meaning endlessly varied retro sounds can be coaxed from this box.

Similarly, Boss approached the multi-voiced digital synth pedal with the SY-1. A total of 121 sounds are packed into the familiar Boss pedal form factor, due to the Variation knob. With some built-in modulation and an effects loop on top of support for expression pedal input, there’s bound to be something here that scratches the synth itch. Separate wet/dry outputs also allow for interesting multi-amp setups – which could bring your synth-based rig to the next level.

This micro synth from Mooer gives you the basics, in a form factor that doesn’t mean sacrificing much space on your board. It offers polyphonic tracking, an arpeggiator, and seven distinct sounds, each with a saveable preset – despite its tiny size.

While it might not be the most fully-featured and customisable synth pedal on this list, for its price and size it definitely shows off Mooer’s mini-pedal pedigree. The E7 presents a viable option for guitarists who want to dip their tones into the world of Synth stompboxes without losing too much cash or room on their board.

The Future Impact is aimed at bass players, but the spaceship-level processing power on display here means it takes pretty much any instrument as well as you could hope. The pedal’s ‘virtual analogue’ sound engine offers four oscillators with extensive waveshaping, as well as two filters. If the pedal’s on-board controls aren’t cutting it for you, there’s the option to hook it up to a computer and fiddle with the sounds at an even deeper level, or use pandaMidi’s sound sharing service to see what others are doing with the unit.

As well as being able to generate tones, it can function as a straightforward multi-effects unit – so the pandaMidi Future Impact V3 could replace your whole board, if you’re so inclined.

A more direct approach is found in the Superego: the focus here is not on voices, but on the ethereal polyphonic accompaniment that allows you to manually build up textures using the latch functionality, or let the pedal track the changes in your playing to add to the layers. The glissando control means the pedal’s synth tones will slide to the next chord you play, perfect for dreamy ambience. An effects loop also allows for modulation or reverb to be added to the frozen, synthesised chords the pedal is outputting.

Incorporating an envelope filter, ring modulation and a multi-voice dual oscillator, MIDI clock synchronisation, and much, much more, the Enzo is a no-holds-barred premium synth pedal. The deceptively simple controls allow for an enormous amount of tweaking of either monophonic, polyphonic or arpeggiated synth voices. The actual sounds are fairly straightforward, but if you’re looking for exacting management of your synth stompbox’s tones then you might want to grab an Enzo.

When gazing upon the many-knobbed face of the Data Corrupter, you may start looking for the switch that lowers the landing gear, and the one to engage the afterburners. But the extensive controls hide a single Monophonic master oscillator – which, after your signal has been chopped and screwed to pieces, adds in a thick, synthesised octave tone with a hefty subharmonic. Some extra flairs such as glide or vibrato, and the ability to mix the different voices of the pedal, mean the Data Corrupter produces a broad range of tones despite its single oscillator – tones that are anything but pretty.

The C4 was inspired by Source Audio’s chief sound engineer Bob Chidlaw’s own Eurorack Synthesiser – so right off the bat there’s some heavy heritage behind this stompbox. On the face of it, it seems quite a simple pedal – but like the pandaMidi, the C4 is capable of being hooked up to an external editor program. This means that the controls on the box are reserved for basic operation such as setting the wet/dry mix or the waveform. The pedal has a considerably smaller footprint than the Future Impact V3 – meaning it’s perhaps more suited to slotting into a bigger rig.

Seymour Duncan bills The Fooz as an “analogue fuzz synthesiser,” as its synth tone is generated by slamming your guitar signal into a squarewave with a fuzz, which then acts as the oscillator component for the rest of the pedal’s modules. Due to the straightforward, analogue nature of the pedal it can blend traditional monophonic synth tones with more traditional fuzz and tremolo sounds. Perfect if you want to add in a bit of synthesis but want to be sure to avoid the sound of an out-of-the-box digital preset.

On first glance, this appears to be a piece of DJ equipment rather than a guitar pedal. It’s based around modular synthesis – giving truly granular control of each aspect of the synth’s sound. The pedal also includes modules for standard guitar effects and can generate its own notes independent from your guitar playing. Whether this counts as a guitar synth pedal or a DAW that sits on your board, it’s hard to say. But what’s clear is that this is one of the most powerful units to control or add to your guitar’s sound there is.

EQD says the Rainbow Machine is “built around a DSP pitch warping engine that’s designed to be slightly imperfect; coloured with digital remnants of the cosmic dust we’ve picked up across the multiverse. That is to say, it’s a cold digital beast made to pretend it has feelings.” In other words, it’s unapologetically weird-sounding. The pedal pitch shifts your signal and feeds it back as extremely modulated harmony, along with “pixie trails” which rise or fall into oscillated strangeness – and the result doesn’t sound anything like a guitar. This again is perhaps hard to classify as just a synth pedal, but given how much it affects the signal, it’s hard to classify in general.

Back on earth, Keeley is offering a more straightforward box with the Synth-1. Level, filter, attack and blend knobs all control a monophonic oscillator, with three waveforms to be selected. The reverse attack of the pedal allows for fuzzy swells, and an expression pedal can control the pedal’s filter – effectively functioning as a Wah.

One of EHX’s more straightforward synth pedals, the Microsynth boasts 10 sliders for controlling the pedal’s voice mix, attack, filter and sensitivity. The filter allows for vintage-styled pads, while the main voice of a crunchy squarewave tone means it’s easy to get a beefy analogue-synth lead sound, especially with the octaves above and below blended in.

The Synthotron offers separate synth and envelope filter sections, as well as an LFO – all serving the main dual-synth engine, which can evoke both the soundtrack to a 70s sci-fi movie or the bit-crushed sounds of an 8-bit video game. Either way, the Synthotron offers up some truly strange analogue tones with a lot of tweaking to boot.

With five dual-concentric controls, the Mothership has three main voices on tap: triangle, square and sine waves, with the latter being shifted down an octave for an extra thick tone. Pigtronix are also keen to mention that it boasts the “world’s fastest tracking circuit” – so fast playing shouldn’t present any issues. Similar to the Superego, the pedal allows for the synthesised notes to glide between certain notes for sweeps across the frequency range, and The Mothership is also velocity-sensitive, meaning it won’t just spit out the same sound however hard you play, instead it responds more organically to your dynamics