The best pedals for noise, experimentation and transformative sound design. 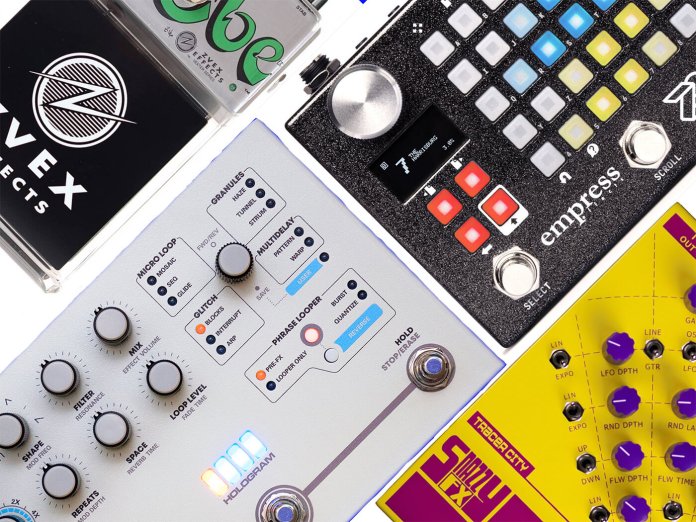 Are you burnt out on low-gain overdrive pedals? Do you long for abrasive soundscapes, torturous drones and noises resembling anything but a guitar? Then this is the list for you. Abandon all blues-rock, ye who enter here: these effects pedals could empty out a local open mic faster than a bucketful of exotic poisonous snakes. Some are just about as pricey, too.

What makes a guitar pedal unique?

If you’ve been in the stompbox world for any amount of time you’ll no doubt have come across one word in particular: clone. Many pedals exist as a direct successor to an established circuit, with the builder’s own tweaks setting it apart from its inspirer. This is by no means a bad thing – those core circuits are ubiquitous for a reason, and having a vague idea of how a pedal will respond before you buy can be very helpful indeed.

But the sonic safety that comes with these set circuit baselines can be limiting to some, and so some builders have taken it upon themselves to throw out the rulebook and attempt to create a circuit that sounds like nothing else – that’s the territory we’ll be exploring with this list.

That doesn’t mean that none of these effects have any grounding in what came before, however. Some are truly unique takes on a given effect – from reverb and delay to and drive pedals – they just feel as though they dropped in from an alternate dimension.

The best experimental guitar pedals to buy in 2021 at a glance: 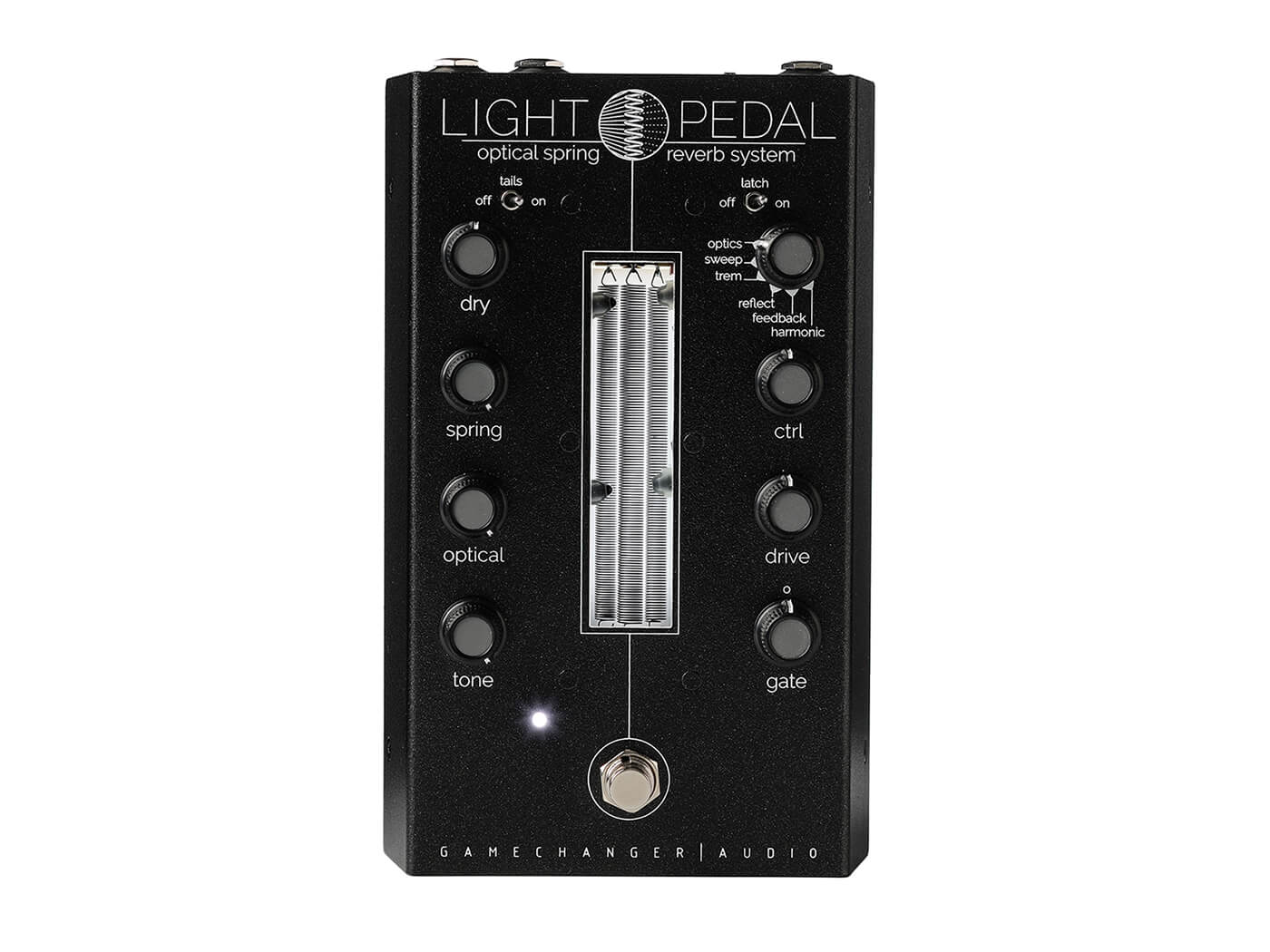 Spring reverb is one of the oldest effects there is – using a transducer linked up to an audio signal to vibrate a spring, and reintroducing the resulting reverberation back into the signal for a drippy, bright reverb. It’s a classic sound. So why is the Light Pedal on this list?

Firstly, because it uses optical sensing to detect the movement of the spring (alongside traditional methods), resulting in a reverb sound like no other, and secondly, its mode switch mixes things up even more with two flavours of tremolo, a lo-fi delay, self-oscillating feedback and harmonic drive. Combined, these result in an entirely fresh take on analogue reverbs.

Sure, it’s big, heavy and makes a thunderous racket if you accidentally kick it – but if you’re in the market for the sort of noises this thing can make, we’re assuming those aren’t problems.

Read our review of the Gamechanger Audio Light Pedal here. 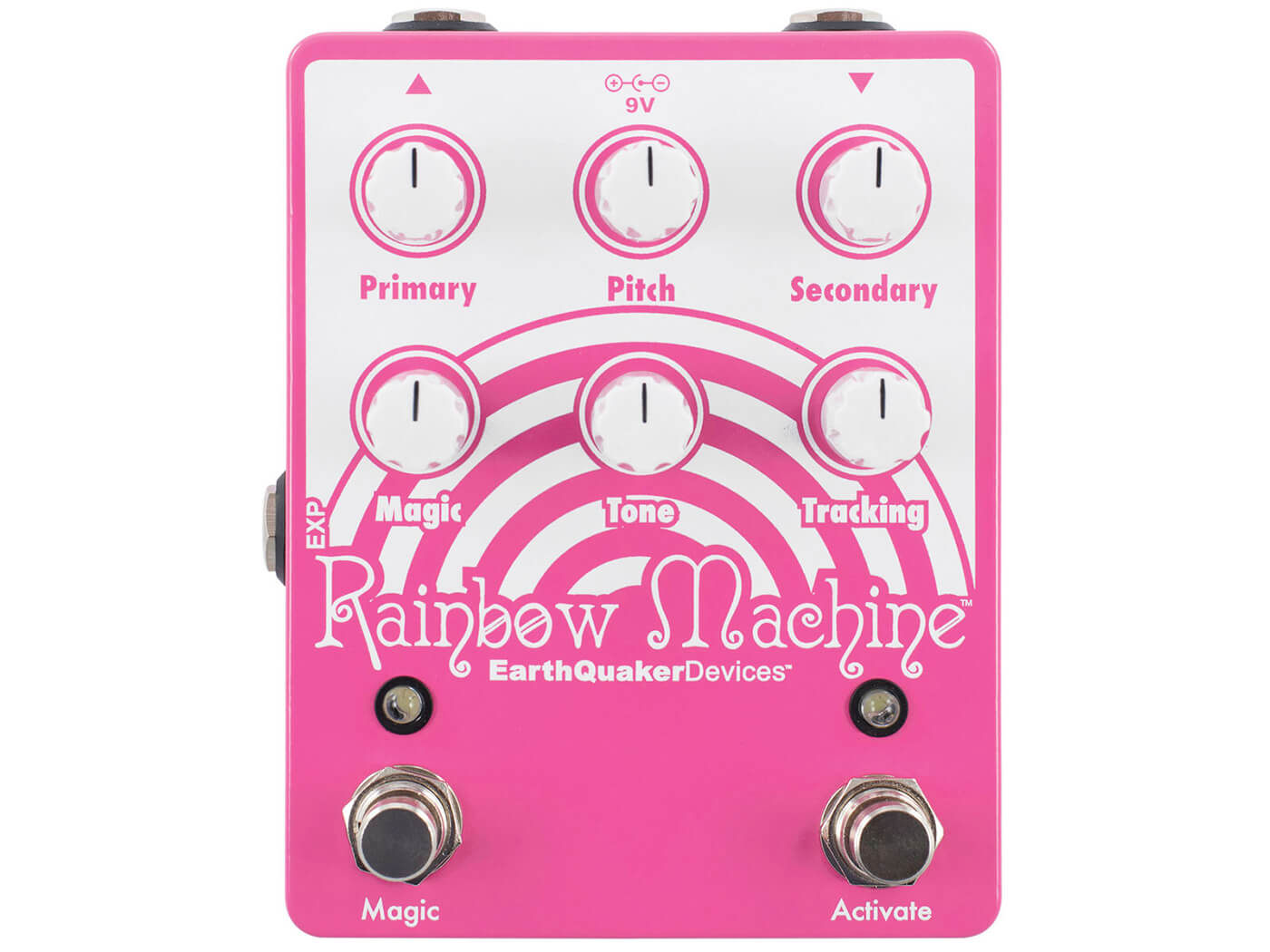 An essential inclusion on any list of outré pedals, the Rainbow Machine is famously unclassifiable, divisive and far cheaper than a lifetime supply of hallucinogens and a Leslie speaker cabinet.

Roll a dice to determine which category you’ll find it in on a retailer’s website, because inside here is a polyphonic, pitch-shifting chorus/delay machine that basically does its own thing, especially with the Magic control engaged. Once this footswitch is pressed, the pitch can glide up or down – though not in a smooth, whammy-like way. EQD describes it as “wild pitch take-offs and descends, chaos chorusing, shrieks, groans, gurgles, wizard-blessed wizardry, signal transformation, imminent destruction, and other general mayhem” – a totally fair description. 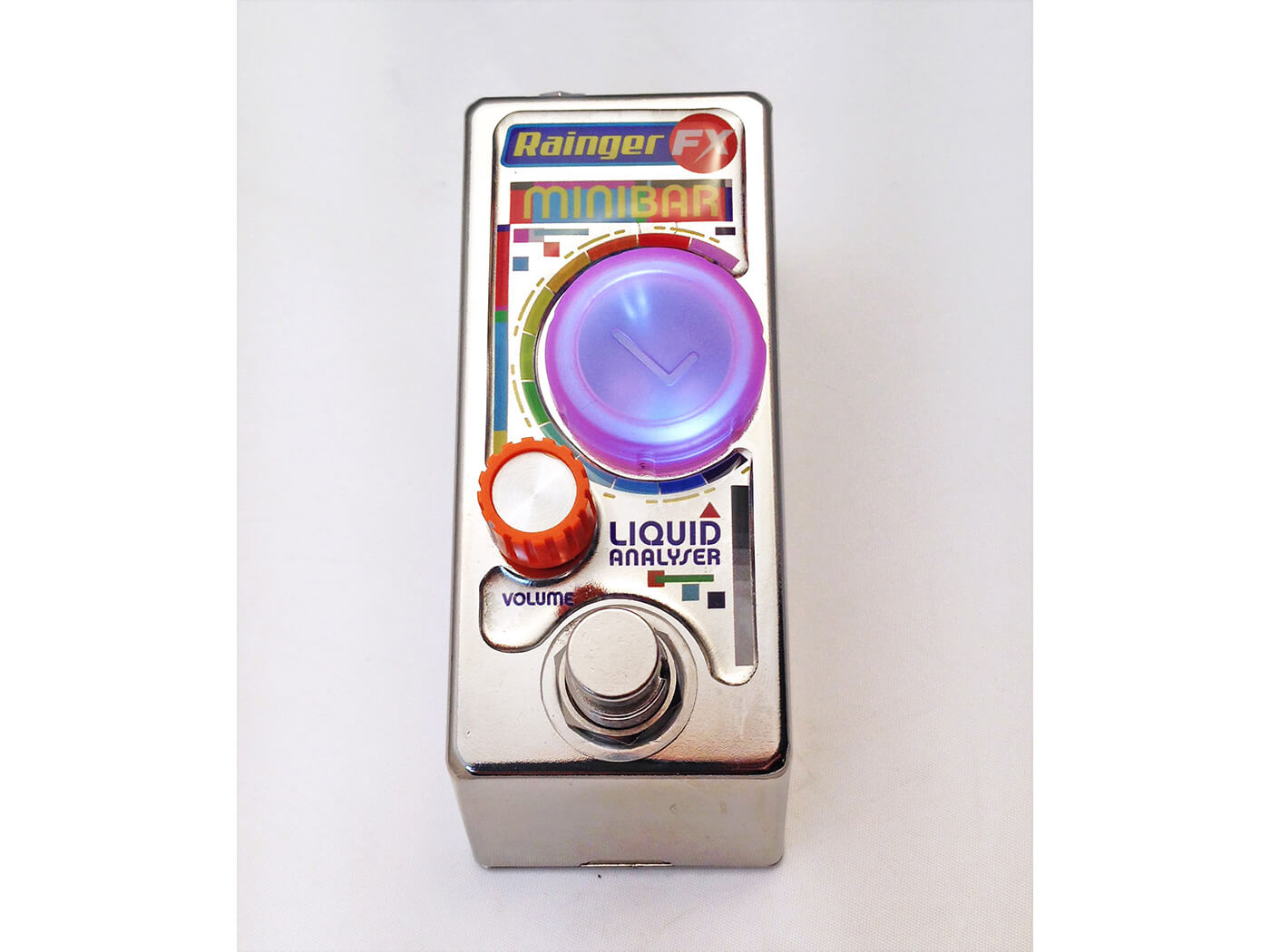 It’s a scenario that strikes terror into the heart of any effects-pedal aficionado. An audience member is jostled, their plastic pint glass of overpriced lager thrown into the air, landing on your carefully assembled pedalboard – and your signal dies. Or, it would have, but luckily you were using the Rainger FX Minibar, and the introduction of a new liquid just gave you an even more exciting overdrive tone.

OK, it’s an unlikely solution to liquid disasters because it’s actually quite a small pedal and you’d need to leave the lid of the small chamber open for that to work, but in any case the Minibar is truly unique – utilising a liquid analyser to change the overdrive sound based on the liquid’s refracting characteristic. Some might view it as gimmicky, but to others, it’s a way of truly separating their sound from the pack.

Price: $149/£135
Description: Overdrive pedal that derives its tone from the liquid you pour into a sealed chamber
Controls: Volume
I/O: Mono ins + outs, the liquid chamber is also an input if you think about it
Bypass: True bypass 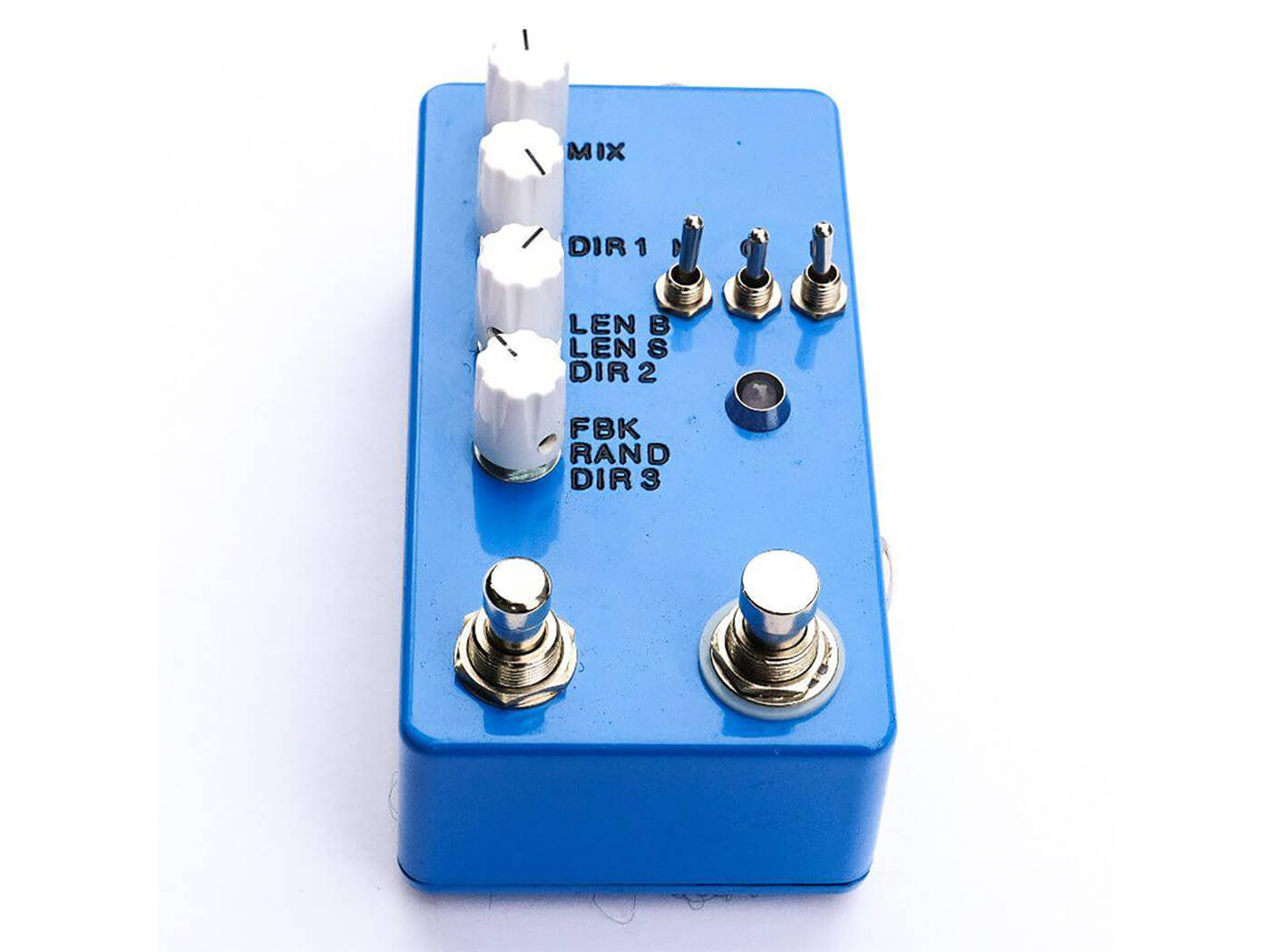 Is it a delay? Kind of. Is it a looper? Sure. Is it unique? Absolutely. The Count To Five by Montreal Assembly is a three-mode pedal, offering a delay and two flavours of slicing looper. The delay’s character is best described as ‘wild’, and depending on your setting almost immediately descends into completely un-guitar-like oscillation.

The looper also eschews long loop times in favour of soundscape-building experimentation. When in either of the loop modes, the ‘direction’ of the loop is controlled by a knob or an expression pedal. This operates a little like a speed control on a tape-machine looper, running the tape forward or backwards at a given speed, pitch-shifts and all. It’s a great example of complex results from simple rules – the sonic capabilities are downright mind-blowing, despite the simple face of the pedal. 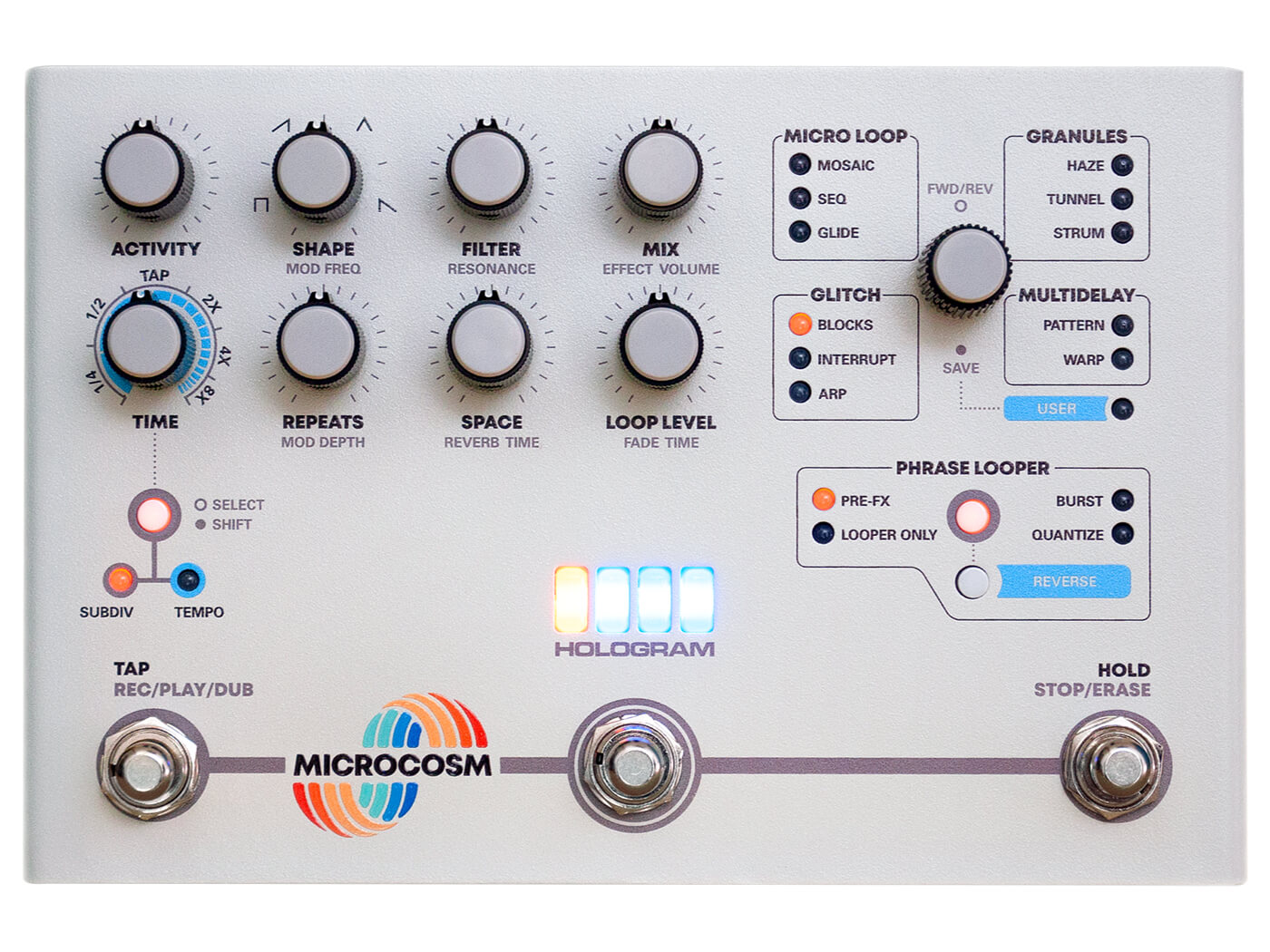 The Microcosm is based around granular effects, that is, slicing your sound into tiny tiny pieces and reorganising them into loops and delays. The benefit? Well, once you get down to the time-scale we’re talking about here, sound becomes strongly abstracted from its source. Loops and delays sound less like you’re playing through an effect and more like you’re being accompanied by someone on an entirely different (and unknown) instrument. There’s a heavy focus on immersive soundscapes, something helped massively by its stereo operation. But the phrase looper can recreate your sound accurately, if you prefer.

The control set is, as you can see, extensive – you could set the pedal differently every day for a year and not repeat yourself – meaning that for those who enjoy knob-tweaking as they experiment with drones, loops and pads, the microcosm is pretty much perfect. 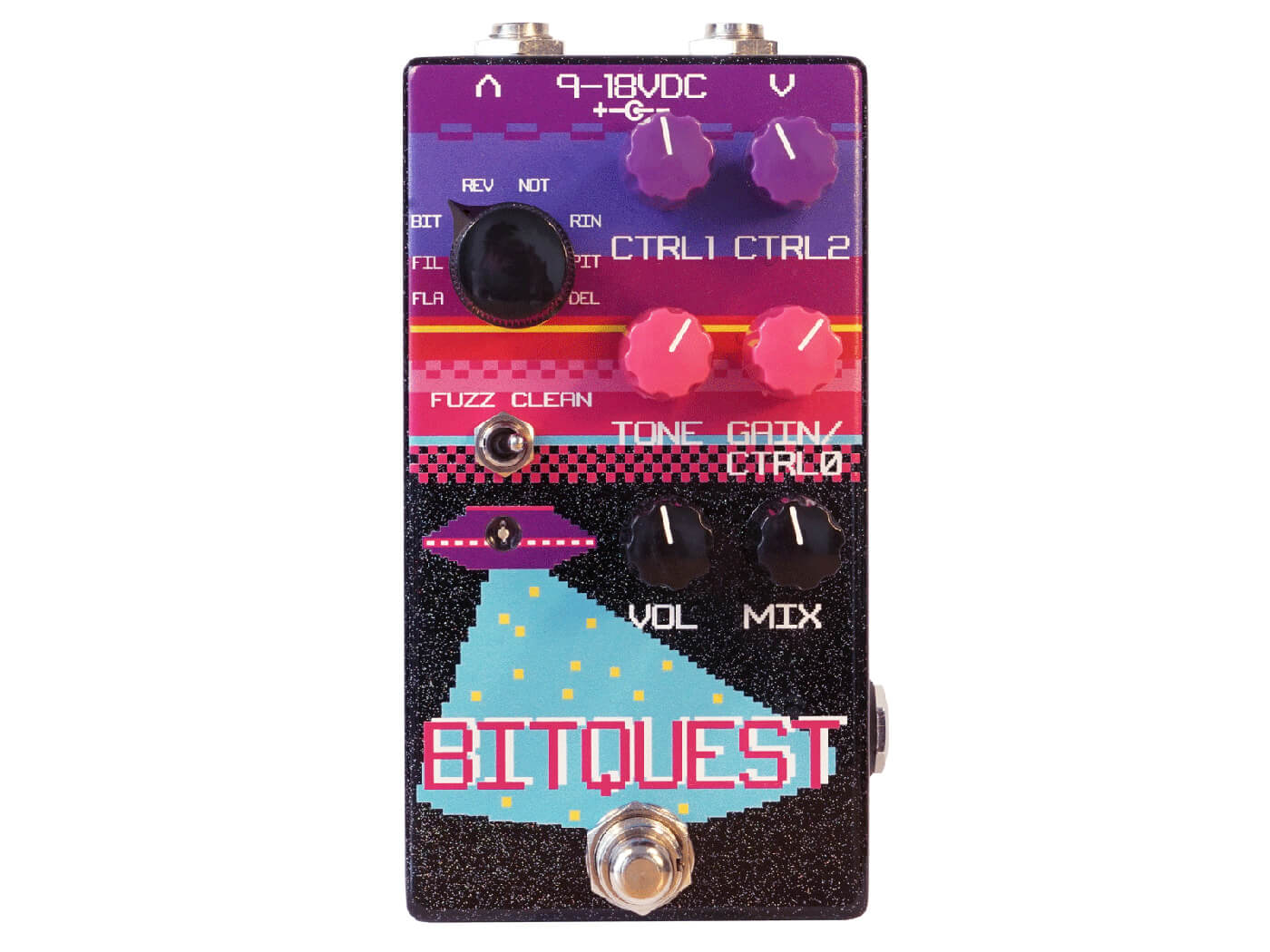 + Eight effects, each of which has a lot of character
+ Clean/dirty switch doubles your possibilities
– Can’t chain effects together

Multi-effects pedals have never been so wonderfully lo-fi. On the face of the BitQuest you will find some universal controls for tone, volume and the like, as well as three controls which change their operation based on the current mode. A rotary switch selects from eight patches: a flanger, HP/LP filters, a bit crusher, an infinite reverb, a notch filter, a ring modulator, an octave effect and a delay. Each of these has a separate sound for clean and dirty modes, selected with a toggle switch, meaning 16 discrete effects are packed into this little box. Each effect in itself allows for some pretty extraordinary sounds, such as an infinitely oscillating reverb drone or an LFO-modulated sample rate. 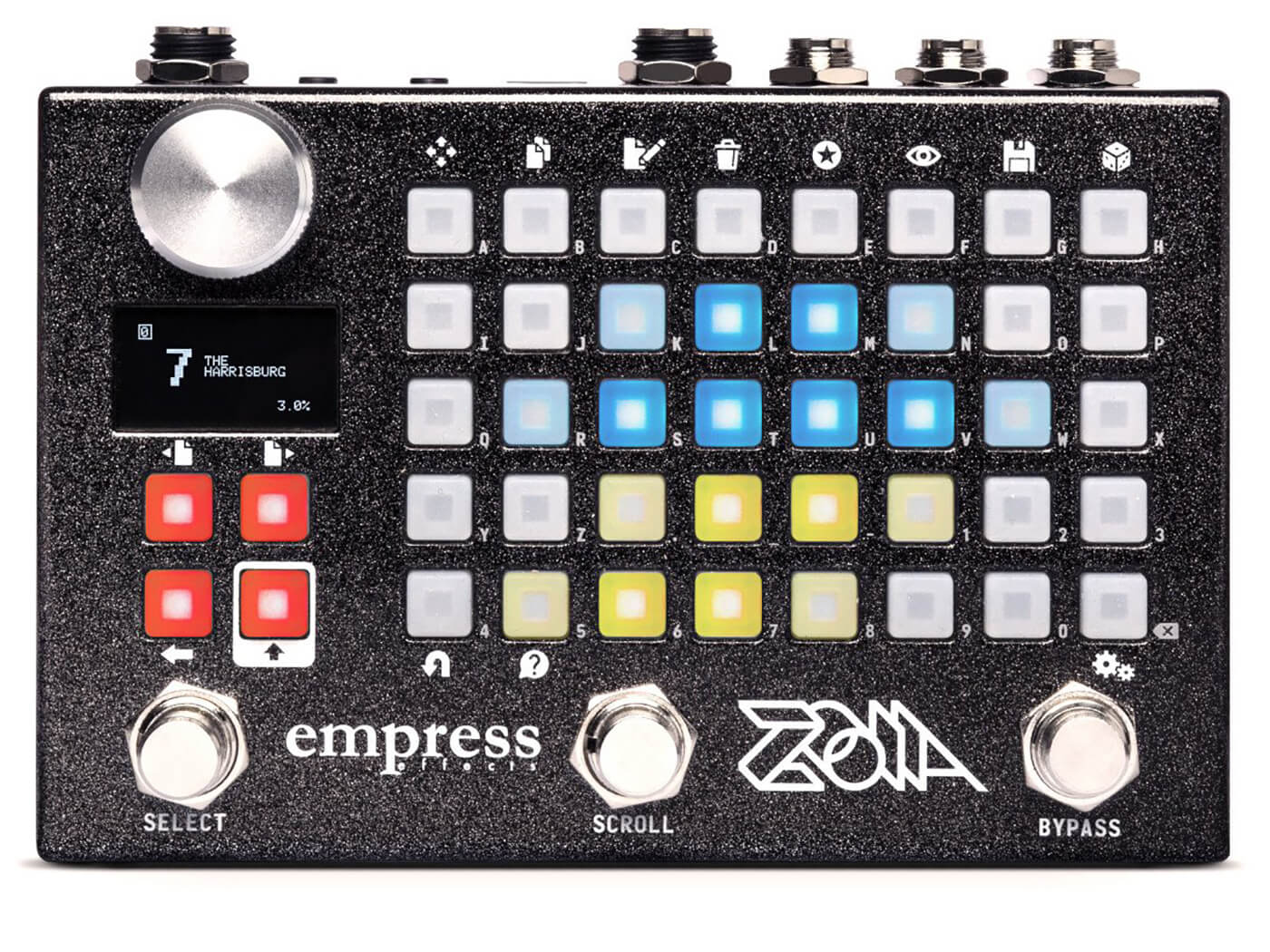 The Venn diagram of pedalboard lovers and modular-synth fans has a notable intersection for obvious reasons – putting together and rearranging your own signal path appeals to weirdos with a similar mindset, it seems.

The ZOIA takes a distinctly modular approach to a digital multi-effects unit: blocks are very simple, individual filters, signal routers, tone generators (yes, it can be used as an instrument in its own right), oscillators, VCAs and more that can be combined like circuit lego to create your own effects from the ground up. If that sounds like a lot of work, there’s a bunch of ready-made effects modules to load.

It’s also not just aimed at oblique, noisy experimentation. It’s got a studio-grade sample rate of 48kHz, with 24-bit conversion and 32-bit internal processing. You can also create and save up to 64 patches and easily recall them during a live performance. 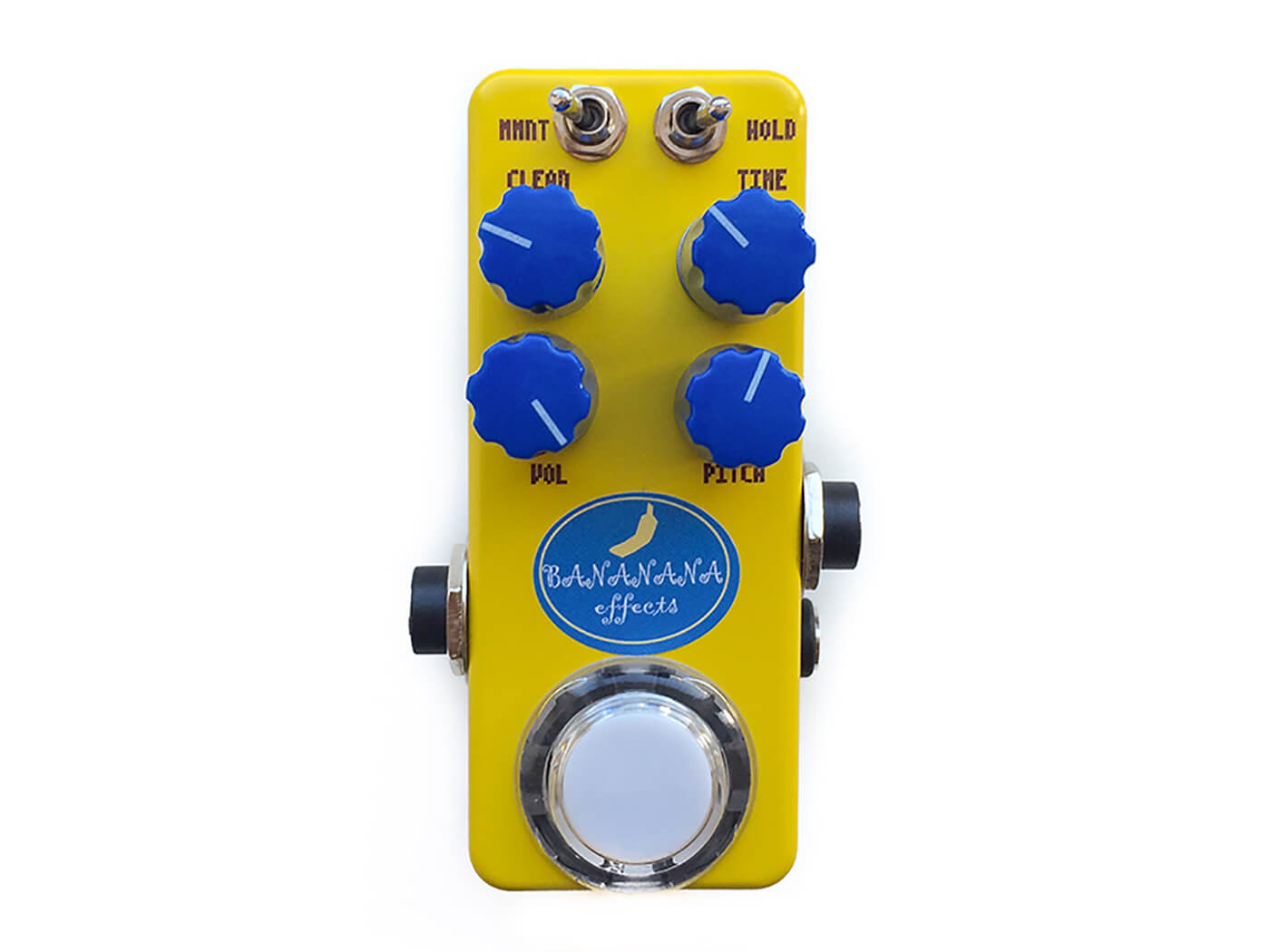 Do you remember what it sounded like in your headphones when you fell down the stairs wearing a portable CD player? Well, the Bananana Effects MANDALA goes some way to recreating what’s surely a fond childhood memory. It works by grabbing a short snippet of the last thing played, much like a delay, but then speeding or slowing down that sample and looping it with a number of caveats.

It works slightly similarly to the Hologram Microcosm, but on a much larger time scale and with much more abrasive results. Ramp up by a semitone every repeat? Why not. Play the loop backwards at half-speed for intimidating bass throbs? Go for it. There’s even a mode that transforms your sound into a glitchy square-wave setting, oscillating it as a drone when you’re not playing, and then capturing your next note as you play. 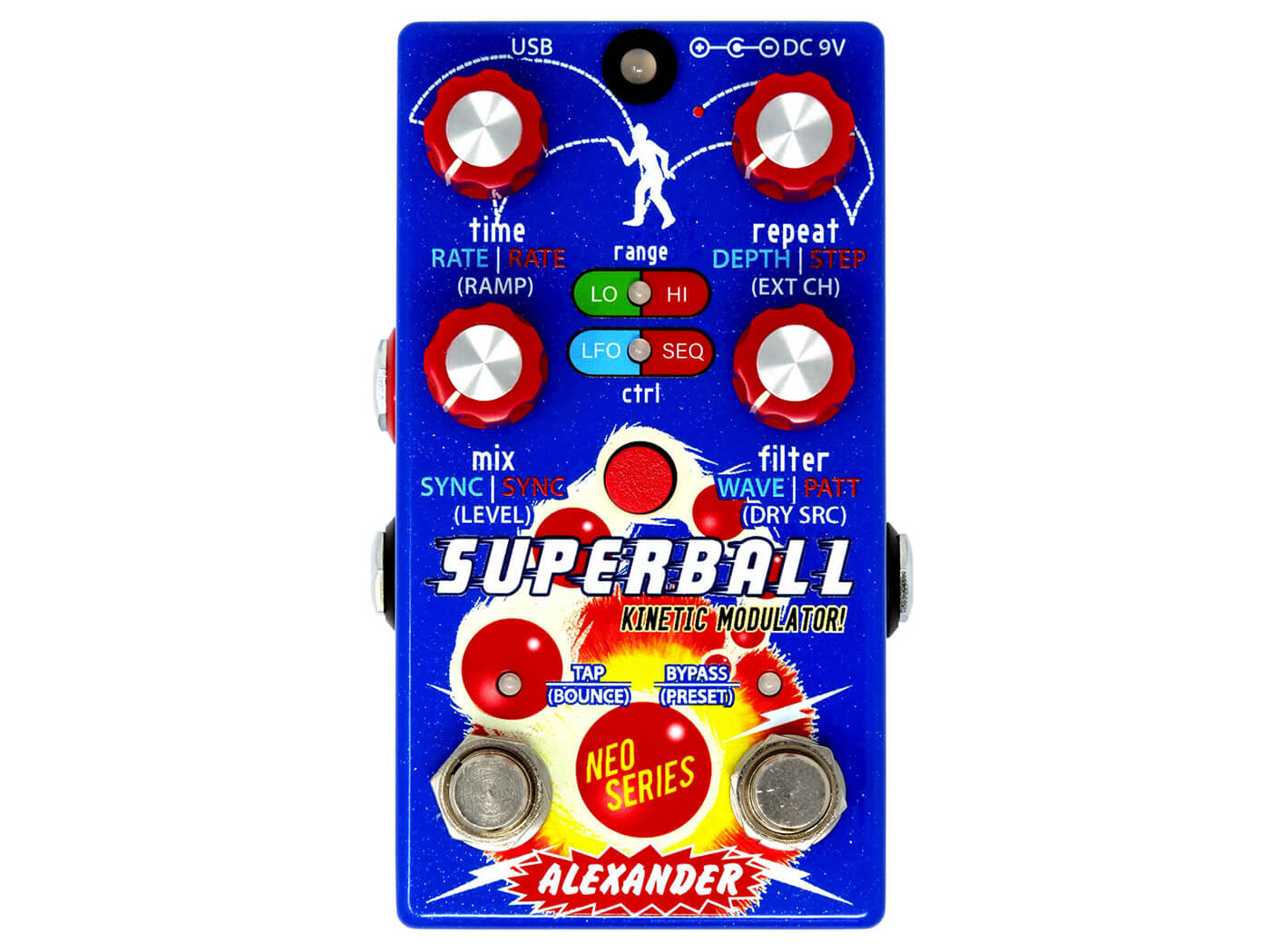 + Can cover more traditional modulated delay sounds, and go weird at the press of a footswitch
+ LFO can be linked to any parameter
– Delay sound might be too ‘busy,’ for some

The original Super Ball was introduced in 1964, a superbly bouncy ball that could leap over whole buildings if thrown against the pavement hard enough. The same cannot be said for the Alexander Pedals Superball Kinetic Modulator. Throw it down onto tarmac hard enough and you’ll just really void your warranty. The best course of action in this case would be to buy another one and actually use it, as the Superball is a wonderfully oddball (ha!) delay: it features an LFO linked up to any parameter of your choice, as well as a resonant low-pass filter and clock time sequencing for odd pitch shifting noises.

The namesake is most evident in the operation of the left footswitch, which ‘bounces’ the LFO a set number of times, each bounce reducing the time of one cycle for some truly out-there sounds, depending on how you’ve set the rest of the pedal. 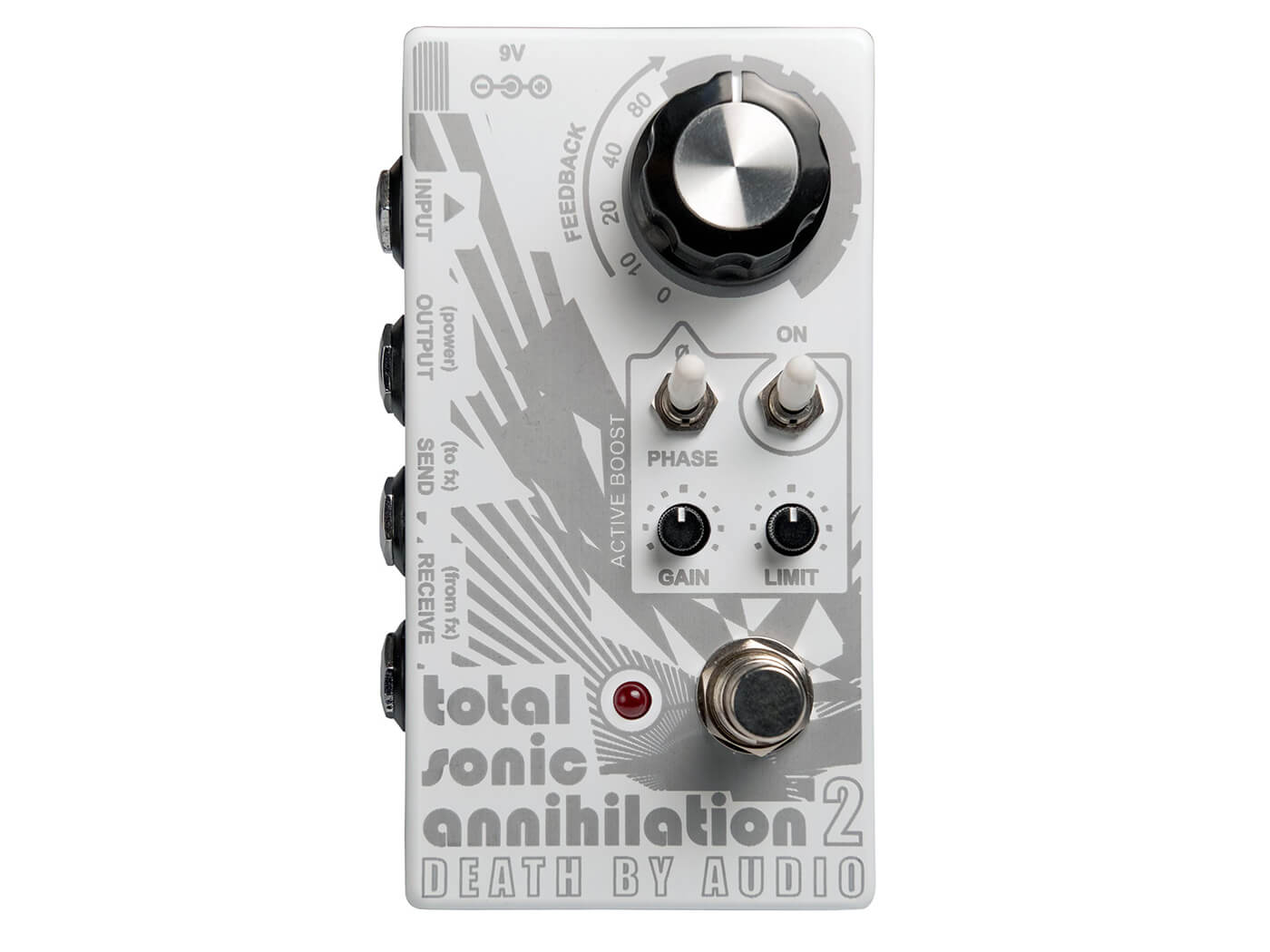 Even for the wonderfully experimental and noise-loving builder Death By Audio, this pedal is pretty weird. It’s designed to be used in conjunction with others, as it creates a controllable feedback loop for pedals you patch into it. And, it’s likely that if you’re in the market for one of these you’ll have a few other pedals lying around. Run a wah back into itself to multiply its filtering exponentially. Modulate your modulation pedals with themselves. Distort distortion. Add more than one pedal into the loop, and go absolutely off the rails. 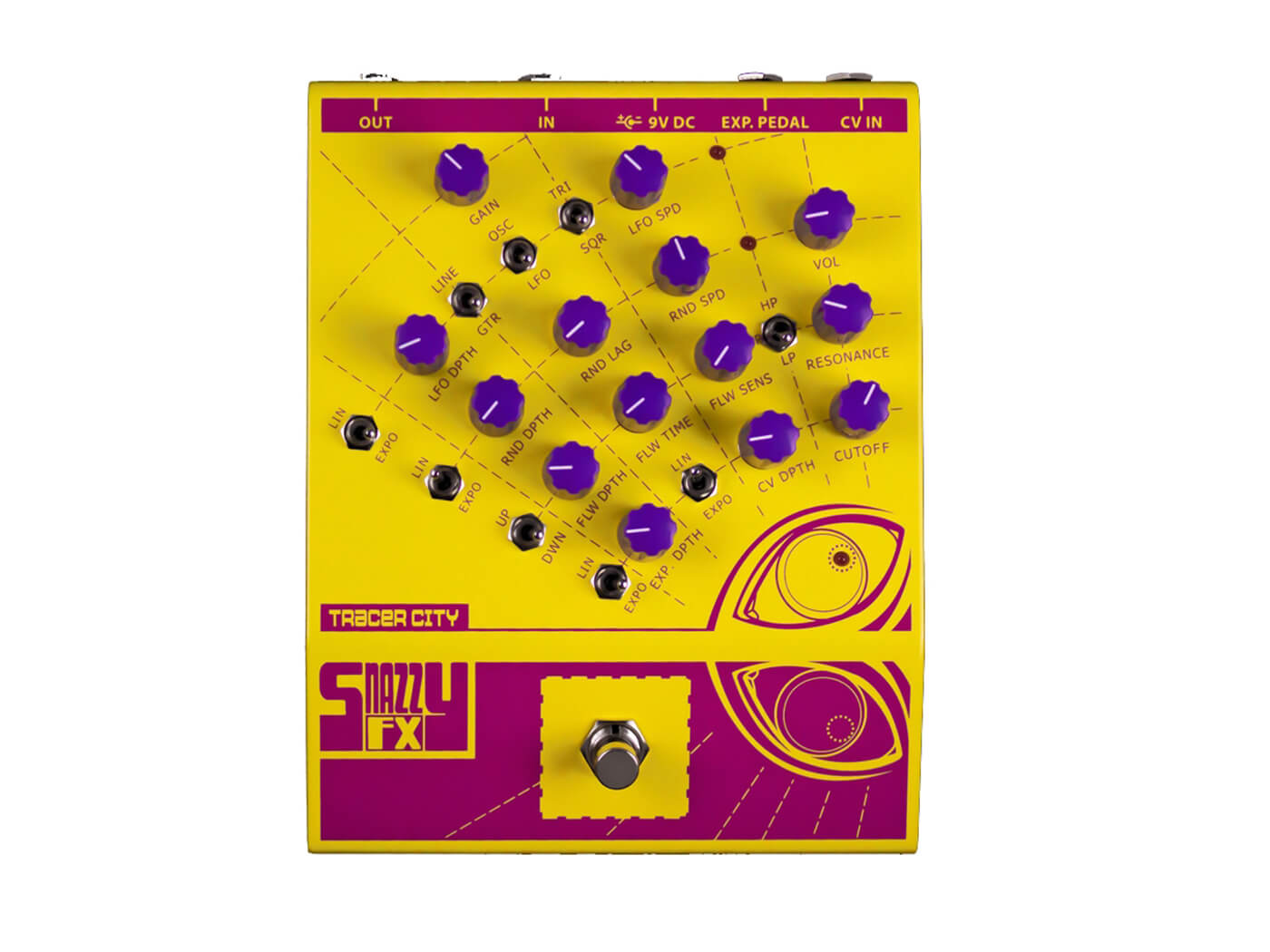 Inside the hilariously large enclosure of the Snazzy Effects Tracer City is an incredibly powerful resonant filter bank, with extensive control over pretty much all of its parameters. It draws more from the tradition of modular synths than guitar-focused modulation effects such as phasers. As such the Tracer City has some interesting features such as two external CV inputs, synth-level headroom and an envelope follower mode for vocalising, auto-wah sounds. The resulting sonics, especially when combined with overdrive, fuzz or delay, are as out-there and as bold as the pedal’s visual design. 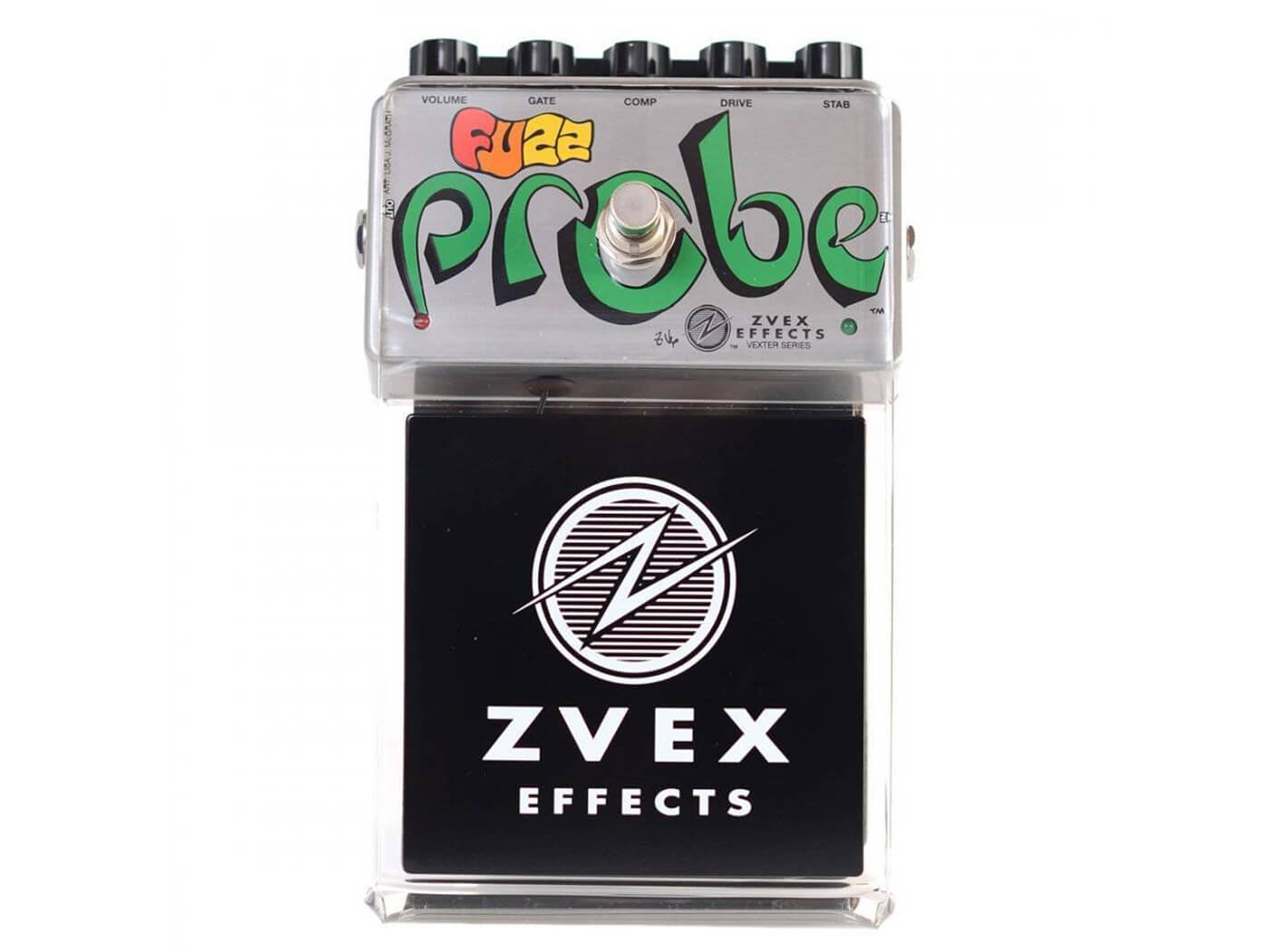 + Literally everything is cooler with a theremin attached to it
+ Great fuzz tones, even without the theremin
– Could come across as gimmicky

There are few things that can’t be improved by combining them with a theremin, and the ZVEX Fuzz Factory is already a great fuzz pedal. Joining the controls for volume, gate, compression, drive and stab is a large pad that responds to proximity, hooked up to a filter adjusted by the Stab (stability) control. At subtle settings, it’s almost (very tentatively) like a fuzz-wah, only one you operate by hovering your limb of choice near, rather than with a rocker. At more extreme settings the pedal almost becomes an instrument in itself, as the fuzzy-filter’s resonance blasts out strange pitch-gliding signals.