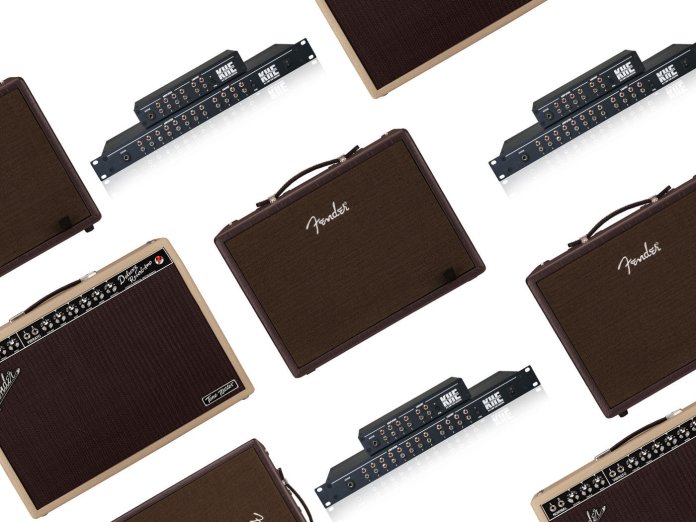 Due to the ongoing pandemic, we didn’t get a Summer NAMM this year. Fender seemed to have a laundry list of products lined up for announcement at the event, which they instead did over the internet. Alongside the notable return of the Road Worn series, some new amps arrived from the brand.

Focused on performance, the Acoustic Junior offers two channels for both instrument and microphone use. It supplies 100 watts of output power, and is equipped with an eight-inch cloth-surround speaker with hi-fi compression tweeter.

Both channels are equipped with their own three-band EQ and a selection of eight built-in effects – room and hall reverbs, echo, delay, chorus, vibratone, and pairings of delay plus chorus and delay plus reverb.

The Junior also has an onboard 60-second looper with overdub and undo functions. If you’d rather play backing tracks (or intermission music) from an external device, however, there’s also Bluetooth wireless audio streaming and an aux input. In terms outputs, there are two XLR outputs and a USB socket.

The Acoustic Junior Go is the battery-loaded version of the amplifier and packs all the same features plus a rechargeable battery for 5 hours of full-volume play, or 12 hours of moderate-volume play.

This 2×100 watt amplifier features a combination of an eight-inch speaker, a compression tweeter and a six-inch side-firing SFX (Stereo Field Expansion) speaker. The last lends to the amp’s enhanced acoustic projection and onboard effects – allowing stereo dimension to be experienced “anywhere in the room”.

Sharing most features with the Acoustic Junior, this amplifier also offers two identical channels for either instrument or microphone and a host of performance-centric features, including a 60-second looper, Bluetooth connectivity, eight onboard effects and more.

Fender’s simple take on digital modelling arrived in 2019, offering a startlingly similar experience to the tube-powered originals – from tones to controls.

Now, the Tone Master Deluxe Reverb and Twin Reverb amplifiers get blonde editions, for a classic early-’60s Fender vibe. The same quality-of-life features found on the originals, such as power attenuation and an IR-loaded XLR-out, are present here.

The blonde amps are also now loaded with Celestion G12 NEO Creamback speakers for a more distinctive rock ‘n’ roll flavour. Like before, the driver here is Neodymium for a great power-to-weight ratio.

Speaking of Tone Master Speaker cones, the originals shipped with the ultra-lightweight Jensen N12K speaker – designed in conjunction with Fender. This cone can now be purchased as a standalone unit.

It builds upon the Jenson C12K, featuring a similar sonic quality and dynamic performance, but at half its weight thanks to a special neodymium magnet design. Its sonic character is described as “warm and full-bodied” and promises “just the right amount of brilliance and sparkle” with “remarkable headroom”.

Perhaps you’ve purchased your fair share of amplifier heads and cabs over the years, and want a way to easily switch between different setups. If you’re tired of waiting for an amp to cool down, fumbling around with speaker cables and then warming the amp up again to play – then the KHE Switcher series is for you.

The units range from desk-friendly to rack-mounted, and allow you to connect a number of different amplifier inputs and speaker cabinet outputs (depending on which unit you buy) and instantly swap between them with the switches on the front.

The various units in the series allow for either one amp running into many speaker cabinets, or many amps running into just one – or a mix of the two. You also don’t need to worry about running your amps without a speaker load, as the units all monitor and provide dummy loads for amps so they’re never at risk of having too small a resistance to work against.

This August, Warwick launched the Gnome series of amplifier heads, which were first announced back at Winter NAMM.

The small solid-state heads have been designed with transparency and high-headroom in mind, as well as portability. Each features a 3-band EQ with 15 dB of cut or boost on each band, for a wide range of sculpting options.

In terms of connectivity, there’s a balanced XLR-out, with a switchable ground lift, meaning easy connection straight into a soundboard or interface. They also offer a headphone socket, which can be used for silent practising when you disconnect the traditional speaker output jack. All of the models offer 4-ohm operation from this jack, with the Pro model delivering 280 watts and the others delivering 200 watts.

The ‘i’ editions of the amplifiers also include USB connectivity for use of the head as an audio interface.