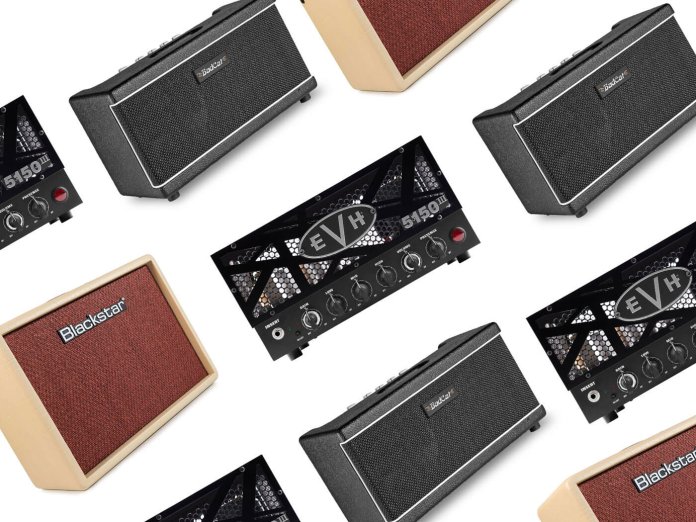 very month, we compile a list of announcements, releases, and rumours from amp and speaker makers big and small. Here are our favourites from the past month.

EVH’s 100-Watt powerhouse has long been a staple of thunderous modern metal. But even in that world, guitarists are realising the value of lower-wattage power stages. And so arrives this smaller version of the 5150. It comes with features from the LBXI and LBXII 5150 amps, with a ‘Green’ clean channel and a ‘Red’ overdrive channel. The two share a presence control, as well as a three-band EQ, with each channel having separate gain and volume controls via concentric knobs. On the back, there’s also a ‘resonance’ knob for even finer control.

The amp accepts a single-button footswitch for channel switching and also sports an effects loop if you want to add pedals post-preamp. This preamp is powered by four 12AX7 tubes, running into a dual-EL84 power stage rated at – notably – 15 watts. This smaller power amp stage mightn’t offer the mighty headroom of a 100-watt amplifier but will behave far better at the lower stage volumes that are becoming more and more common. If 15 is still too many watts, a toggle switch on the back of the amp drops it down to 3.5.

Due to certain circumstances which shall go unmentioned, having a wider arsenal of DAW-based amplifiers is pretty essential at the moment. And what better addition to that arsenal than amps based on Cory Wong’s signature clean, percussive tones. The three offered in Neural DSP’s Archetype Cory Wong include D.I. Funk Console, an amplifier based on an analogue channel strip that provides “the classic ‘bubble tone’”. It’s built with tube saturation, a compressor and selectable frequencies on the EQ section, plus high- and low-pass filters for extra control.

Lastly, The Amp Snob emulates a rare amplifier that is versatile and capable of providing crystal clear tones. As per tube amp tradition, the amp has a ‘sweet-spot’ dialled in when the master volume is cranked, as the simulated valve saturation smooths out the high-end.

A free trial is available and is currently on an introductory offer of £86, down from £108. Find out more at neuraldsp.com.

Perhaps your virtual amps need a little more gain? In that case, Brainworx has you covered with the Rockergain 100, a software rendition of the Orange Rockerverb head. This plug-in makes use of the brand’s proprietary modelling technology to accurately emulate the original’s 12AX7-equipped preamp section and EL34-equipped power amp section.

IK Multimedia has launched AmpliTube Joe Satriani, a collection of virtual amps and pedals built with the input of the guitar virtuoso himself. The software is designed to run on both desktop and iOS versions of AmpliTube, or as a standalone desktop app. The software, and Satriani’s involvement, was first announced last year.

The amplification and cabinet offerings include the Satch VM, modelled after Satriani’s signature Marshall JVM410HJS head, the SJ50, based on a ’93 Peavey 5150, both of which have a matching cab sim. The last amp model, the Boston 100, features an expanded version of an ’82 Scholz Rockman, paired with a stereo mode and the Boston Rockman X100 cabinet simulator.

The desktop version of AmpliTube Joe Satriani is priced at $99, while the iOS version can be purchased in-app from within AmpliTube CS for $24.99. Learn more at ikmultimedia.com.

Blackstar has launched a new range of beginner practice amplifiers, the Debut 10E and the Debut 15E. The two models are, as their names imply, rated and 10 and 15 watts of solid-state power respectively.

Both amplifiers feature Blackstar’s signature ‘ISF’ control, which works in tandem with the EQ settings of the amp to voice it towards either a British- or American-style amp tone. The amps come with a subdued vintage aesthetic, with a brown speaker grille, cream coverings and chicken-head style knobs.

The Debut 10E and the Debut 15E amps will list for $79 and $99 respectively. Find out more at blackstar.com. For more gear news, click here.

At the higher end of things, Blackstar also announced a new version of the HT Club 40MkII tube combo – this time equipped with 6L6 tubes in its power amp section instead of its usual EL34s. According to the brand, this edition of the 40-watt amplifier was one much requested by its customers.

The majority of the amplifier’s original specs remain in place, it still has the two ECC83 tubes in its preamp, and its range of controls still include a tone stack EQ, as well as Blackstar’s ISF (Infinite Shape Feature). Its single 12-inch speaker is a Celestion Seventy-80.

There’s also onboard digital reverb with light and dark modes, and a speaker-emulated output with both 1×12 and 4×12 voicing options.

The 6L6-equipped HT Club 40 MkII comes with a 2-way foot controller and is priced at $799. Learn more at blackstaramps.com.

Bad Cat Amplifiers has launched The Paw, a high-end hybrid desktop amplifier that has the same preamp section found in the brand’s larger Cub amp. The Paw’s all-tube preamp section features a combination of an EF86 and two 12AX7 tubes. Its power amp, on the other hand, is driven by a 60-watt Class D topology. The Paw has a built-in duo of six-inch speakers, but it can also be hooked up to an external cab.

The Paw is also equipped with impulse-response loading talents, with 16 IRs preloaded, and the ability to drop in more via a USB-C connector. Further adding on to the Paw’s applicability as a direct recording device are two XLR outputs and a stereo effects loop.

Bad Cat’s The Paw is available at $799, learn more about it at badcatamps.com.

Milkman Sound has teased a version of ‘The Amp’ taking the form of a standard amplifier on its Instagram. Take a look at the post below, which poses the question: “Should this be a thing?”

The regular version of The Amp is a 50W guitar amp in a floor-based format. Its preamp is based around a single 12AX7 running at high voltage in a discrete Class-A circuit, which means the front-end of the amp reacts like any tube preamp, while the Class D power section delivers 50 watts into 8ohms, or 100 watts into 4ohms. It’s been highly praised for its straightforward approach and clear sound. The current floor version can also work at a pedal-level output – but that’s probably less necessary in the teased amp-head version.