Our favourite new amp and speaker announcements, releases and rumours of the September 2020. 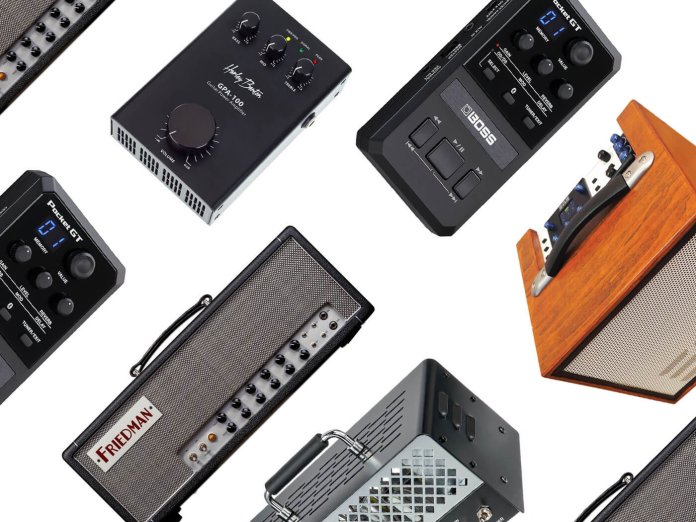 This month, Harley Benton offered us a quartet of affordable amplification solutions. Let’s take a look at these first:

The unit’s chassis is reminiscent a typical stompbox, but it still packs class D technology and delivers either 100 watts at 8 ohms, or 190 watts at 4 ohms. It’s not just a plain power amp, giving some useful controls for dialling in your signal. The largest dial is a master volume positioned at the bottom of the device. At the top is your EQ section with bass, mid and treble knobs. Also in the top section are signal and peak LED indicators to ensure your signal is being fed through properly.

As for sockets, the GPA-100 keeps things minimal with just a single instrument input and an output jack. According to Harley Benton, the GPA-100 is voiced to connect to “any preamp, pedal or effect device”. Weighing in at just 800g, this lightweight amp could be a useful backup to have in the gig bag should your amplifier suddenly conk out in the middle of a session.

The second of Harley Benton’s amplification products for September is an active cabinet designed for players using digital rigs. The G212A-FR is outfitted with a pair of custom-voiced 12-inch speakers, as well as two 1-inch compression drivers for reproducing high frequencies. According to Harley Benton, the cabinet should supply a full-range and flat response, and accurately represent your sculpted tone across 90Hz to 20kHz.

As for its power handling, the G212A-FR can take 2×100 watts RMS at 8 ohms, which should be plenty for most gigging situations. If you want to run your rig through a venue’s PA – or perhaps a mixing desk – there are also two XLR outputs, which can be set as either mono or stereo.

The third launch from Harley Benton this month was the SolidBass series, a set of bass amplifiers and cabinets: two combo amplifiers, an amplifier head and a range of four cabinets.

On all the range’s amplifier models, there’s a four-band EQ, a Smart Compressor, a built-in tuner and a mute function. Sockets include inputs for both active and passive basses; a DI balanced output with pre, post, lift and ground switches; an FX loop; headphone output, and line input for silent practice.

The smaller of the two combos is the 150-watt SolidBass 150C, which comes with a 12-inch custom-voiced bass woofer and a 3-inch tweeter. Meanwhile, the 300-watt SolidBass 300C has a 15-inch bass woofer and 3-inch custom-voiced tweeter. With the amplifier heads, wattage goes even higher, with the smaller SolidBass 300H packing 300 watts, and the SolidBass 600H packing 600 watts. Both heads, however, share the same dimensions, and were designed to be paired with the series’ cabinets.

SolidBass cabinets go from the single-speaker SolidBass 115T – equipped with a 15-inch and 3-inch tweeter – to the massive SolidBass 810, which comes equipped with eight 10-inch woofers.

The final offering from Harley Benton this month is the Mighty-15TH, a no-nonsense tube head with a wallet-friendly price tag. It’s a single-channel amplifier outfitted with a pair of 12AX7 preamp tubes, two EL84 power-amp tubes and a 6E2 indicator tube. It can be run at either a full 15 watts or brought down to 7 watts.

The amp features a straightforward control section with knobs for gain and master volume, as well as a three-band EQ (bass, middle, treble). Although it doesn’t have any built-in reverb, there is an additional boost switch onboard.

The electronics are housed in a sturdy metal chassis with a grille on the front and back panels, and slots on the tops and sides for improved airflow. These should help to keep things cool for longer playing sessions.

As for ins and outs, there’s a single instrument input socket on the front panel, and three speaker outputs in the back at either 8 or 16 ohms.

This month Friedman Amplification has launched the Twin Sister, which puts two of its popular Dirty Shirleys into a single amplifier. The amp was designed for players seeking out a “vintage classic rock tone inspired by British tube amps from the 60s and 70s,” according to the brand.

The Twin Sister is a 40-watt tube amp and – like the Dirty Shirley – draws from a modified Marshall JTM 45. Each is handcrafted and comes as either a dual-channel combo or head.

The amp uses five 12AX7 valves in the preamp section and two 5881 valves to drive the power amp. With the combo variety, you get a 12-inch Celestion G12M Creamback speaker at 16 ohms.

Promising to deliver “gorgeous sparkling cleans to a glorious vintage crunch and beyond”, the Twin Sister boasts powerful yet familiar controls.

On each channel, you’ll find master and gain controls, as well as a three-band EQ with bass, middle and treble knobs. Adding to those are global presence and ‘deep’ knobs to further sculpt your tone with, and a three-position gain structure switch which lets you quickly alter the characteristics of the drive.

The Twin Sister also plays extra well with pedals and outboard gear, thanks to an Ultra transparent series effects loop located in the back. And for impedance matching, there’s a three-way impedance selector for running the amp at 4, 8 or 16 ohms.

Along with its new Octave pedal, this month Boss launched its smallest multi-effects unit yet – the Pocket GT. There are 100 amp models and effects packed into a unit the size of a smartphone, meaning endless tone-chasing with a huge variety of combinations.

The unit, with a little help from the Boss Tone Studio app, also incorporates a YouTube browser, meaning you can learn songs straight from the source – even looping difficult sections. You can save playlists for set practice routines, and even set tone changes to happen in sync with the songs you’re playing along to.

Effects are controlled and selected via a UI, with dedicated physical parameter knobs. If you want to play a backing track or fill space with music, the amp is also Bluetooth compatible for easy streaming. The mixer’s outputs allow for both a ground-lifted main mix signal and an aux mix signal to be sent to a desk or interface via XLR.

There’s also active crossover and individual amplifiers for the 8″ woofer and 1″ silkdome tweeters – meaning a more clarity across the whole frequency range of the amp.