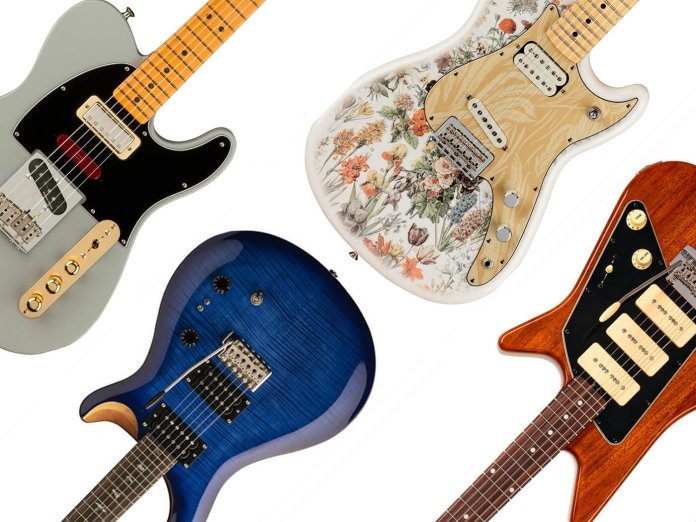 This month, Fender announced the much-anticipated return of its Road Worn series, now under the Vintera banner. These instruments feature artificially-aged nitrocellulose finishes for a vintage look right out of the box.

Lukas Nelson’s new signature Gibson is based on his very own ‘56 Les Paul Junior. Like the vintage original, this guitar pairs a slab of mahogany to a chunky mahogany neck. Its pickup is a single P90 with Alnico 3 magnets, which is voiced especially to Nelson’s liking. But while the instrument does keep much of the original’s vintage flavour, it also includes some more modern inclusions, such as a subtly compensated wraparound tailpiece for better intonation.

Fender teams up with Shawn Mendes on this revamp of the Musicmaster, which adds some modern updates to the classic Fender design. The guitar’s construction consists of an alder body, a bolt-on C-shaped maple neck and a maple fingerboard. The scale-length is a relatively short 24 inches, which is similar to that of the Fender Mustang.

For electronics, there’s a Player Series humbucker in the neck and a Tex-Mex Stratocaster single-coil in the bridge position. For more tonal variety, the humbucker can be coil-split with a push-pull pot.

The guitar’s striking finish features a vintage illustration-style flower design across the body, which was created by a Mendes fan.

The brainchild of inventor and product designer Anthony Dickens, the Circle Guitar lets players ‘program’ custom picking patterns by affixing picks onto a perpetually rotating disc. Players can then control which strings are heard through a set of buttons and switches, which are routed to a hexaphonic pickup. While still in a prototype phase, the instrument caught the attention of Radiohead’s Ed O’ Brien, who shared an Instagram video of himself testing it out.

The baritone variant of Ernie Ball Music Man’s Axis Super Sport, this sparkly instrument features a basswood body, a roasted maple neck and an ebony fingerboard. The guitar comes with a pair of custom-designed baritone humbuckers – routed to a straightforward control section with a master volume knob and tone pot, as well as a five-way pickup selector. The guitar comes in a Starry Night finish, and features a matching headstock as well.

The Slite is a modular travel electric guitar from Reveho, a new instrument brand from France. The guitar has a full-scale design and breaks up into five modules. These were designed to fit into a laptop-sized carrying case with custom inserts, and according to the brand, can be put together in roughly 20 seconds. The guitar supplies its own preamp in the lower body module, and in the Amp version, the top module is outfitted with a 15-watt amplifier with up to six hours of battery life.

A Kickstarter for the instrument is due to launch on 9 September, stay tuned for that, here.

This anniversary edition of the SE Custom 24 comes in conjunction with PRS’ 35th anniversary this year. The model’s first run, which came in a Black Gold Wrap Burst, is now completely sold out. This second run, which PRS expects to sell equally quickly, comes in a Faded Blue Burst and is limited to less than 3,000 units.

The guitar takes after the PRS Custom 24, while taking several features from the Paul’s Guitar model. It features a mahogany body with a carved maple and flame maple veneer top. That gets paired to a 24-fret maple neck with a rosewood fretboard – adorned with the brand’s signature bird inlays in abalone. This model features a duo of TCI “S” humbuckers, with two mini-toggles for engaging both or either as single-coils.

The Brent Mason Telecaster was announced as part of Fender’s Stories Collection of artist models. Even at first glance, it’s clear that the session wizard’s signature model isn’t your average Telecaster.

It replaces the Telecaster’s usual two single-coil pickups with a combination of a Seymour Duncan mini vintage-voiced mini humbucker in the neck, a Hot Stack in the middle, and a Vintage Stack in the bridge position. These are routed to a three-way switch, two volume controls and a push-pull master tone. Pulling up on the tone knob engages an alternate switching mode, which lets you keep the middle pickup on, no matter what position you’re in.

The second volume control works exclusively for the middle pickup – allowing you to blend your tones just like a classic Strat and Telecaster. There’s also a Joe Glaser B-Bender system built-in, with an alternate strap button should you decide you don’t need it.

The production line version of the guitar lists for $2,499.

This mahogany variation of country legend Albert Lee’s signature electric model was announced as part of Ernie Ball’s Ball Family Reserve. The guitar also gets part of its name from a trio of Ernie Ball Music Man-designed MM-90 single-coils. It has an Indian rosewood neck and fingerboard, and a backplate autographed by Lee himself. As for hardware, the guitar comes fitted with Schaller locking tuners and a vintage vibrato bridge.

The new flagship model of Cort’s KX Series, the Cort KX500 electric guitar was designed with players of heavy genres in mind. It has a mahogany body and a 3D multi-layered ash burl top – finished of course, in black.

As for its electronics, the KX500 comes outfitted with a duo of active Fishman Fluence Modern humbuckers, which are controlled with a push/pull volume knob for two selectable voices. There’s also a push/pull tone knob, which acts as a coil split, and a three-way pickup selector.

The Fender Esquire makes its return in this 70th Anniversary reissue, produced only for 2020. Just like the series’ earliest models, this instrument features a lightweight pine body, only this time treated with Fender’s roasting process for better resonance.

Megadeth comment on bassist David Ellefson’s grooming allegations: “There are aspects of David’s private life that he has kept to himself”