Our favourite new electric and acoustic guitar announcements, releases and rumours of September 2020. 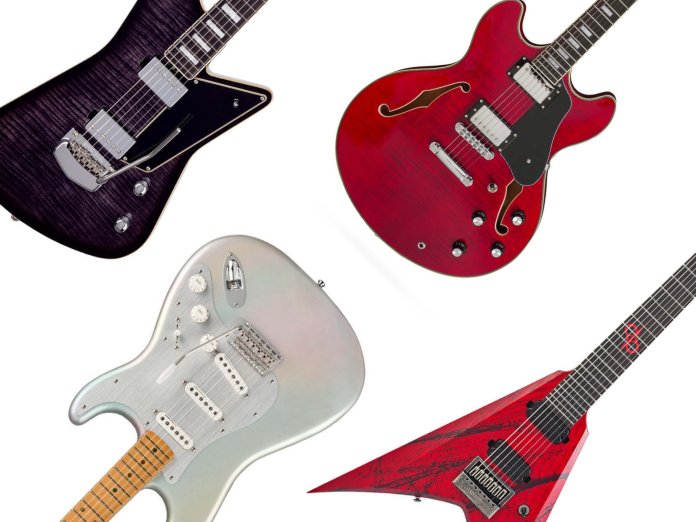 George Harrison’s iconic ‘Rocky’ Stratocaster received the Fender Custom Shop treatment in this authentic reproduction. The guitar is the work of Master Builder Paul Waller, and features many of the key aspects of the original, including an asymmetrical C neck shape, ‘Grimwoods’ decals and of course, Harrison’s DIY psychedelic paint job.

Now you can get your hands on the instrument which appeared on such classic Beatles records as Help! and Sgt. Pepper’s Lonely Hearts Club Band – that is, if you’ve got the cash to splash. Still, it’s likely the closest replica ever of the legendary instrument, and worth appreciating even if only its meticulous build process. Have a look below:

Sire teamed up with Larry Carlton on a trio of affordable quality electrics, and The H7 is the 335-esque model of the series. Available in cherry sunburst, vintage sunburst or red, this maple-bodied guitar has a ‘C’ shaped mahogany neck and an ebony fingerboard with 22 medium jumbo frets. Its pickups are a pair of Larry Carlton Vintage humbuckers – voiced to match the guitar great’s personal tonal preferences.

Singer-songwriter HER’s signature Fender was announced last month and it’s an head-turner. The Stratocaster is finished in a subtly iridescent Chrome Glow, and has a 1-ply aluminium pickguard to match. In terms of its specs, the guitar is wonderfully vintage-minded. There are a trio of Fender Vintage Noiseless single-coils pickups, as well as a mid-’60s C shape maple neck. For smooth vibrato, there’s also a six-screw vintage-style Fender synchronised bridge.

Said HER in a statement on her new eye-catching guitar: “By designing a Stratocaster with a colour, shape and sound that is one-hundred-percent my own, my hope is that other young women and players from all backgrounds feel inspired to pick up this guitar, tap into their thoughts and create amazing music.”

The Ola Englund led Solar Guitars unveiled this new V-shaped model with a brutal aesthetic. The Canibalismo V1 sports a swamp ash body, matched to a three-piece maple neck with an ebony fingerboard and 24 super jumbo frets. The guitar comes loaded with a pair of exclusive Duncan Solar humbuckers, which route to a simple volume knob and pickup selector. There’s also a seven-string edition available.

The six-string Canibalismo is available for $1,199, while the seven-string version goes for $1,299.

Gilmore Guitars announced the Bobby G, a versatile and premium single-cut aimed at blues, rock and metal players. The guitar’s semi-hollow construction involves a Monkeypod body and neck, topped with a Madagascan ebony fretboard. That runs at a compound radius which slides from 7.25 to 14 inches. Meanwhile the back of the neck sports a symmetrical C profile. Other appointments include a camel bone nut, Pearloid binding and a thin nitrocellulose finish.

As for electronics, you’ll find the Bobby G equipped with two mini-humbuckers, a three-way switch on the top horn and master volume and tone knobs. There’s also a choice of either a vintage-style tremolo or a hardtail bridge.

September’s Ball Family Reserve instruments included this limited-edition take on the Ernie Ball Music Man Mariposa, the signature instrument of Mars Volta guitarist Omar Rodríguez-López. The instrument features an Okoume body, a maple top and a Trans Black finish. Paired to that is a roasted maple neck with an ebony fingerboard and 22 medium wide frets. In the electronics department are a pair of Ernie Ball Music Man humbuckers, two volume knobs and a three-way pickup selector.

The Mariposa is available at $3,599, and is limited to only 25 pieces worldwide.

These zesty variants of the Ernie Ball Music Man Cutlass models also came as part of September’s Ball Family Reserve instruments. They combine a light basswood body with a highly figured maple neck and fingerboard. For a rich variety of tones on tap, there are three pickups on this model: two custom wound Music Man single coils in the neck and middle position, and a DiMarzio Axis humbucker in the bridge position.

To defeat single-coil hum, these Cutlasses also adopt an active wide-spectrum Silent Circuit, which last up to 500 hours on a single battery.

While technically announced at the start of October, the Taylor GT is just too cool not to include on our list. This acoustic introduces a brand new guitar shape to Taylor’s repertoire: the Grand Theater, offering the playability of a small-scale acoustic with the rich sound of a larger instrument.

Its body construction combines a spruce top with sustainable Urban Ash on the back and sides. It also features eucalyptus on the bridge, fingerboard and peghead overlay. Meanwhile, the soundhole’s three-ring rosette has been fashioned from koa. Each guitar also sports an ultra-thin matte finish.

The Taylor GT and GTe are priced at $1,399 and $1,599 respectively (including Taylor’s travel-friendly brown AeroCase).

Luna Guitars announced the Vista Eagle Tropical Wood, an ornate acoustic-electric with five different kinds of wood in its construction.

Quilt mahogany, padauk, bird’s eye maple, koa, and flame maple make it onto the guitar’s body construction, while its neck and fingerboard feature mahogany and ebony, respectively. For amplification, there’s a Fishman Presys+ preamp, which gives you a three-band EQ, phase inverter and onboard tuner. Its hardware features are rounded up with a bone nut, sealed die cast tuners and dual-action truss rod.

The Vista Eagle Tropical Wood comes in a leather-tooled hardshell case and is priced at $729.

Fender launched the Billie Eilish ukulele last month, a concert-sized uke wrapped completely in the pop star’s “blohsh” icon. The instrument features a sapele body with a satin matte black finish, as well as a nato neck and walnut fingerboard with 16 frets. Like other Fender ukes, this one features a four-in-line Tele headstock, which comes with a matching paint job.

For amplification, there’s a Fishman Kula preamp onboard, with a three-band EQ, volume control and inbuilt tuner onhand.