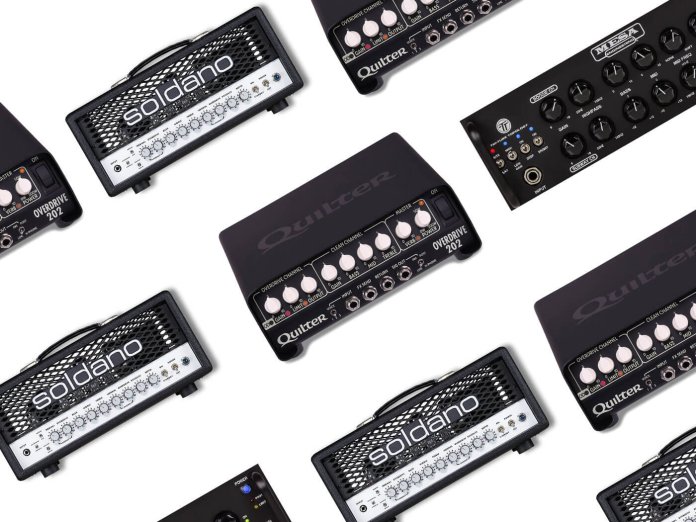 This two-channel solid-state amplifier packs a formidable 200 watts of power into a sub-two-kilogram package. Features include three overall EQ voices, built-in reverb and internal cabinet simulation for when you’re running direct. The master control also directly affects the amp’s power rating, meaning you can open it up for more clean headroom. Following on from the other Quilter amplifier heads, it’s aimed at capturing a responsive, clear tone while avoiding the dreaded solid-state fizz.

Joyo’s latest addition to its BanTamp line of lunchbox amplifier heads is the XL-Zombie II. This compact 20-watt amplifier is designed to deliver American-voiced high-gain tones. It’s driven by a 12AX7 preamp section for a natural valve response, which runs into a solid-state power amp section. A new clean channel is also present, with independent gain and volume controls, accessible via the front of the amp or a footswitch. And – making eighth-inch aux jacks seem somewhat primitive – the amp’s Bluetooth-equipped, meaning you can beam backing tracks straight to it for practice jams.

If the lunchbox form factor appeals, but you’d rather a British-voiced amp head, Joyo still has you covered with the XL-Jackman II. Like the XL-Zombie II, it’s got a 12AX7 preamp tube driving a solid-state power amp. There are two channels here too, again switchable with an external footswitch. Bluetooth, an effects loop and a headphone jack mean this little amp is both a practice and gigging powerhouse.

Smaller wattage versions of hundred-watt powerhouses are all the rage, and so it is with Soldano’s SLO-30, a 30-watt version of the beefier SLO-100.

The amp is voiced for rock and metal, and retains a lot of the same features from the other SLO amplifiers. At its core, it has two channels: normal and overdrive, with each channel sharing a three-band EQ, as well as presence and depth controls, but has its own independent preamp and master volume control. Various toggle switches allow for further tone shaping, and the effects loop is built to handle the impedances of anything from vintage pedals to rack effects.

This single-channel 60-watter gets its name from its two 6550A Tung-Sol reissue vacuum tubes, paired with three ECC83 JJ/Tesla tubes. In terms of gain – which you’ll find this amplifier is in no short supply of – there are two separate band-passed gain controls for high and low frequencies. Armored amplification here uses its proprietary tone stack, which is voiced specifically for extended range and drop-tuned guitars. This gives you bass, mid and treble controls, as well as a sweep knob that can make broad alterations to the amp’s EQ. Four switching options are available for further tone-tweaking, too.

While it didn’t arrive in June, the rumours of a high-powered, high-headroom version of Mark Tremonti’s signature PRS amplifier were confirmed, with Mark himself revealing he has a prototype at home. The amp isn’t just getting a volume boost, as the clearer, higher headroom provided by the extra juice is something of a tonal consideration, evoking, as Tremonti told Ultimate Guitar, the punchy boost of a Dumble: “That’s what I’ve really been digging on right now. It’s just an amazing tone. When I collect amps at home, I have a few Dumbles and other amps like that, I got so addicted to that tone and I want my amp to have a great version of it. That’s what we’re dialling in at the moment.”

This new addition to Mesa Boogie’s Subway series of bass amplifiers comes with two channels, and an incredibly hefty 800 watts of class-D power amplification. The two channels are named Boogie and Subway respectively, with each featuring independent controls for gain, a high-pass filter, a three-band EQ, a midrange frequency adjustment and volume. The Boogie channel is voiced closely to Mesa’s Bass 400+ series, while the Subway channel is voiced with a more modern approach, so a tighter low end, and punchier mids.

Kirk Hammett officially joins Gibson: will get signature guitars from Gibson and Epiphone

Harmony launches a Bigsby version of the Silhouette