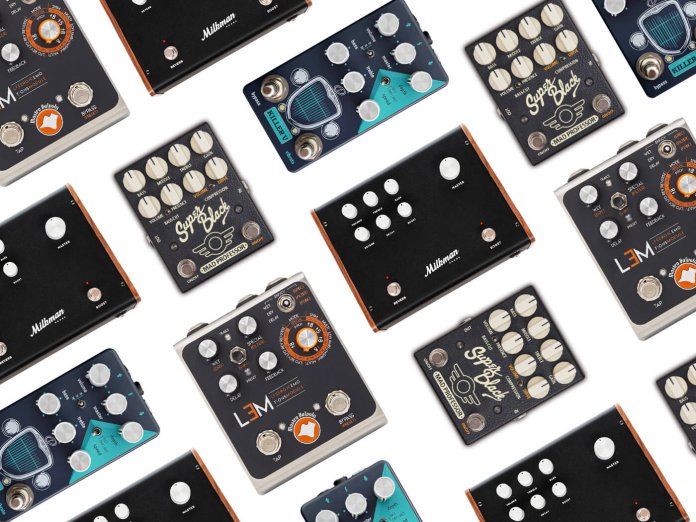 The FoxGear Anubi series of multi-effects pedals comprises the Ambient and Modulation pedals. Both feature the FoxGear Rainbow’s FV-1 digital processor which allows the user to combine different effects.

The Lysergic Emotions Module (LEM) is Mastro Valvola’s latest multi-head delay pedal. This feature-rich modulation pedal can store up to four presets and offers up to eight ambience types, ranging from a standard reverse delay to a lo-fi spatial ambience delay-reverb.

2020 is the year that Electro-Harmonix finally releases a pedal-based tuner. Taking the release date into its model number, the EHX-2020 is a budget-friendly compact tuner that fits on almost any pedalboard and boasts and accuracy of +/- one cent.

The Main Fuzz is touted by Ananashead Effects as a “do-it-all” fuzz box that can be built to feature either a germanium, silicon, or hybrid Si-Ge circuit. The design may be based on the venerable Fuzz Face, but a mode switch is included that allows the user to alter the voicing of the pedal.

Crazy Tube Circuits’ Killer V serves up surf-rock tones thanks to its overdrive-vibrato combo, inspired by classic Magnatone and Fender amps of the 50s and 60s. The stompbox features JFET technology and an internal voltage multiplier to provide ample amounts of tube-like dynamics headroom.

In conjunction (unofficially) with John Frusciante’s return to Red Hot Chili Peppers, Ibanez has launched an updated version of the funk rock guitarist’s favourite wah pedal – the WH10. Exclusive to Music Zoo, the WH10V3 include modern features like the ability to switch between true and buffered bypass modes.

Free The Tone‘s brand-new DVL-1H is not your typical volume expression pedal. This upscale utility unit trades the standard string-based variable resistor set-up for a more sturdy and reliable gear-and-belt mechanism which links the pedal’s operation directly to volume change. A lower impedance version of this pedal is also in the works.

Mini pedals certainly have their appeal and TC Electronics is not about to dispute that. The brand’s latest Hall of Fame 2 Mini and Flashback 2 Mini prove that a drop in size doesn’t have to come at the expense of functionality. Both pedals feature the multi-function MASH footswitch and TC Electronic’s signature TonePrint technology.

To celebrate 10,000s unit of the Cali76 Compact Deluxe being built, Origin Effects have released a limited run of the original, full-sized Cali76-TX and TX-L compressor pedals. Both feature a 12-stage LED gain reduction meter, a balanced line-level/DI output and a high/low-gain switch.

Heather Brown Electronicals’ esoteric overdrive pedal gets a few handy upgrades that increases its overall output while providing it with a wider tonal spectrum. The new version of the Blessed Mother Overdrive also retains its predecessor’s Immaculator control which allows the user to control amount of dry signal-bleed in.

Going from 300 to 1000 is a sizeable jump, but Boss‘ new SY-1000 has the features to back it up. Alongside the extensive instrument modelling, the SY-1000 offers a recreation of the GR-300, the OSC analogue synth engine and the new Dynamic Synth. All three offer numerous filter options, but the Dynamic Synth is the most fully-featured, offering tonnes of modulation possibilities.

Fans of the original Leslie rotary speaker will be thrilled with the much-smaller footprint of Neo Instrument’s Micro VENT 122 and Micro VENT 16. The former is modelled after the Leslie 122 rotary speaker while the latter is built to simulate a 10-inch speaker with a single rotor.

Mad Professor gives us its take on the ever-popular Fender Blackface tones with the Super Black, claiming that the pedal’s circuitry replicates the amp’s signal path. The chimey three-band EQ is accompanied by a separate overdrive circuit that’s based on the Sweet Honey Overdrive, allowing users to overload the signal.

Sunn O))) and EarthQuaker Devices’ collaborative piece receives a second – and final – reissue, this time in a matte silver enclosure. The Life Pedal is based on three stages: an octave fuzz section modelled after the Shin-Ei FY2 and FY6, a distortion circuit in the vein of ‘Whiteface’ ProCo Rats, and a boost stage designed to push preamp tubes into harmonically-saturated breakup.