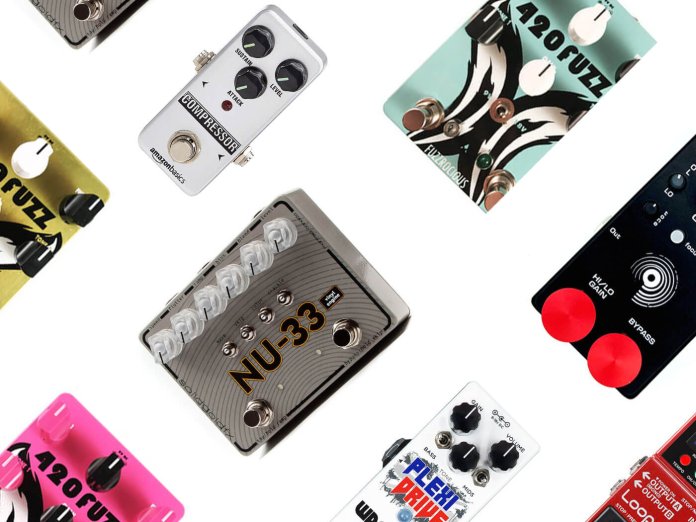 Some of the most puzzling guitar pedal news came about this month in the form of Amazon’s own line of mini pedals. No, that’s not the name of a new boutique builder on the scene – it’s the same Amazon you use to order cat litter with one-day delivery. The set of mini pedals bear the sort of creative names that only a trillion-dollar company could come up with – including Drive, Distortion, Tuner, Compressor and Delay.

Unsurprisingly, these pedals are rebranded, and according to YouTuber Gear Gods, taking them apart yields the brand name Nux – another manufacturer of budget mini pedals. They might provide an affordable entry point into the world of pedals, just as long as you don’t plug them in as Amazon does in its product photo.

The output of the distortion pedal is creatively running into the output of the looper. Whatever’s happening in that last patch cable must be jolly exciting – it’s a shame it will never be heard by human ears.

Fuzzrocious has reintroduced its 420 Fuzz, which was first launched in April 2018 – no prizes for what day in April – in a new set of colourways, and with a new clean blend knob. The new version, of course, retains the original’s two discrete fuzz circuits, which can be blended together for sonic mayhem or used individually for more restrained vintage fuzz sounds. The exact colour you get depends on the retailer you go with, but if you’re a fan of doom-tinged fuzzes, its return is sure to be a high point of your year. To put it bluntly – it’ll smoke any competing fuzzes, given that the brand has had two years to weed out any issues.

Analogue music media is cool, and always has been. Solid Gold FX agrees, as its latest pedal allows you to recreate the warm, crackly character of a vinyl record in your guitar’s sound. With in-depth controls for a chorus-inducing LFO and the amount of pop, white noise and skips, it’s a one-way ticket to nostalgia town that fits right on your pedalboard.

Wampler’s Plexi Drive is a stable of the genre – definitely one of the highest-rated British-style overdrives. If you’ve always wanted one but you’re strapped for pedalboard space, then, against all odds, October 2020 has been your month – as Wampler has introduced a mini version of the pedal. Joining the bass boost switch for this version is a mid-boost switch, which is a nice extra.

Not a pedal so much as it is an uber-capable patching and switching solution, TheGigRig’s G3 brings an updated featureset to an already feature-packed formula. The result is a switcher that could handle even the most unruly of boards, with options to fine tune any pedal’s input buffer and output level, as well as set up complex parallel signal paths – among countless other applications.

The sci-fi fans among us need a bit of a pick-me-up following the news that the film adaptation of Dune is set to be delayed until October 2021. Luckily Acorn Amps released a dune-inspired dual distortion pedal, which allows for a host of massive sounds, and even more tweaking options when running the two different circuits into each other.

Sunnaudio’s Nucleus NU-1 acts as a two-channel preamp, and sports a secondary footswitch to change between the high and low gain sides. Each has an independent level control, allowing you to kick above the rest of the mix for a solo, or have a lower gain part be brought up to match your high-gain tone. The other footswitch bypasses the unit.

The low-gain channel ranges from a crystalline clean tone to a broken-up-overdrive sound, while the high-gain goes from pushed clean to saturated distortion, offering up to 60dB of gain.

The centre of the pedal is dominated by a large gain control which, along with the smaller tone knob and ‘focus’ knob, the two channels share. This ‘focus’ control adjusts sub-harmonics and shapes your midrange for, unsurprisingly, a more focused tone.

Puzzling in a completely different way to online retail giant Amazon launching a basic set of mini pedals, these unique prototypes present a cool solution to modular effects, and we can’t wait to see how they progress.

Cicognani Engineering’s Pompeii PE603 is one of the most impressive echo units to drop in a while. It’s a tube-equipped multi-head echo pedal – a modern take of the Binson Echorec P.E. 603, famously adopted by bands such as Pink Floyd, Led Zeppelin and the Shadows in the 1970s.

The Pompeii scales down the vintage Binson device to a mid-sized pedal, while still offering most of its core features. A 12-position rotary switch – modelled after the original’s – lets you choose from different “tape-head” combinations that offer multi-tap and beat-split delay effects. With the carefully recreated feedback and tone circuits and controls, players can craft the same lush and otherworldly delay sounds of which the original is known for.

There’s also a 12AU7 vacuum tube onboard, which is said to provide the signal a balance of warmth and transparency.

The Pompeii also has a knob dedicated to the classic “varispeed” mod, in which the original’s tape motors can be sped up or slowed down to achieve interesting and experimental effects. The Pompeii replicates the effect through circuits, offering up to 740ms of delay on tap.

The GT-1000CORE is based on Boss’ GT-1000 Guitar Effects Processor, and packs in the same powerful effects processing tech into a more pedalboard-friendly enclosure. Each patch you load can run 24 simultaneous effects, including two amps at once. The unit has 250 slots for user presets, too, so you can load up your GT-1000CORE with tones for any situation imaginable.

For the loop station side of things, the RC-5 (single-channel) and RC-500 (dual-channel) both offer 13 hours of stereo recording, as well as deeper control with external footswitches, expression pedals or MIDI. Each features 32-bit AD/DA and 32-bit floating-point processing, onboard rhythms, phrase memories for storing loops and backlit displays

The smaller RC-5 features full stereo I/O, along with an LCD screen – which has a colour-changing backlight, indicating recording, overdub, and playback states. All basic looping functions are accessed by the main switch of the pedal, but connect up to two external footswitches for deeper control of assignable functions. Or, use an expression pedal for continuous adjustments. The RC-5 also includes MIDI I/O on space-saving TRS jacks, if you want to integrate the pedal into a more complex setup.