Our favourite new stompbox announcements, releases and rumours of April 2020. 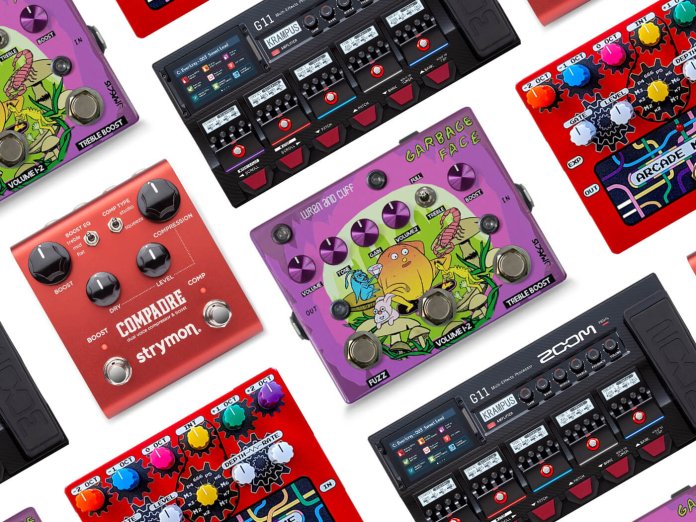 Zoom is probably best known in the guitar world for its affordable-but-quality multi-effects pedals, and with this latest offering the Japanese device builder pulls out all the stops. The G11 offers amp modelling with impulse response, a slew of custom designed effects, and a snazzy new colour-touchscreen to control it all. Could this possibly be the arch-rival of the Line 6 Helix?

RPS Effects bring chiptune-type sounds to the guitar with the Arcade Machine, an analogue synth and harmoniser pedal that ‘re-synthesises’ guitar signals into square waves. With this pedal, glitchy synth madness can be achieved through a series of parameters for octave up and down, and an expansive vibrato section. With onboard CV inputs, hooking up a sequencer like EHX’s 8-step program for arpeggiated sounds is also possible.

Daredevil launched The Hype as a minimalistic pedal with no external controls other than a bypass footswitch. Packed with a high-output FET boost, this pedal supplies players who need ‘just a little bit extra’ with a simple boost to cut through a mix. If the boost voice doesn’t quite nail it on the head, an internal trim pot allows guitarists to make fine adjustments of its output level. But other than that, it’s free of any distracting knobs or dials.

Strymon’s Compadre comes as the brand’s latest foray into the world of stompbox compressors, following its discontinuation of the OB.1, its first ever pedal. This dual-voiced compressor aims to equip guitarists with “true studio-quality analogue compression”, and can toggle between smooth transparent characteristics or vintage squeeze. The independent boost circuit also gives players the option of running either a clean volume boost, or a soft-clipped, slightly overdriven boost.

The Molecular Boost is a compact boost, buffer and volume pedal from Greek pedal builders Tsakalis Audio Works. On top, it features a single knob that can bolster signals with up to 18dB of clean volume. Additional functions for the pedal make their appearance as a series of four dip switches on the side. This can control the boost’s EQ characteristics, add a high-cut filter, and enable the expression input for using the Molecular Boost as a volume pedal.

Dophix continues its series of guitar pedals inspired by figures from Italian art history, with the Dante Overdrive. This three-knob pedal delivers an array of driven tones that can range from a subtle overdrive, to a fully crunched sound. Like the other pedals in the series, Dophix has adorned this one with some minimalistic art; a portrait of the late poet, Dante Alighieri.

Spaceman Effects launched its latest germanium fuzz pedal, the Sputnik III. Designed as “an homage to the golden era of electronics”, this pedal makes use of authentic Soviet germanium diodes and transistors. The Sputnik III delivers a bevy of fuzz tones that range from smooth and thick, to gritty and splatty. Like its previous iteration, the pedal includes a Drift control – which introduces ‘sonic corruption’ to guitar signals, sending it off in wonderfully chaotic ways.

Catalinbread launched the Blood Donor, a guitar pedal for charity, which sees its profits go directly to the American Red Cross. The Blood Donor is based off the brand’s katzenkonig ‘fuzzstortion’ pedal, though it makes several changes, including a set of new transistors for increased gain output, and a reduced noise floor. At its launch, Catalinbread said: “we’ve been hard at work coming up with any way we can to help our country’s most vulnerable citizens. Our Blood Donor pedal does just that: we pledge to donate 100 percent of all this pedal’s profits to the American Red Cross, along with a little gentle encouragement to give your own blood to the cause.”