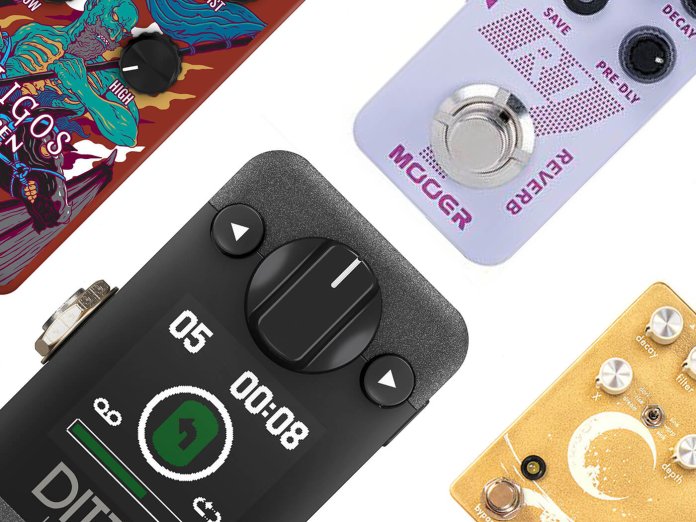 In developing the Maxon Apex808, Susumu Tamura, inventor of the original Tubescreamer took three years to analyse over 100 different vintage and in-production TS/808 variants. His studies pointed to a link between the best sounding Tubescreamer specimens and a certain brand of IC chips of a particular production period – which Tamura sourced for the Apex808. “The use of this ‘hen’s tooth’ IC has a dramatic effect on the sound characteristics of the Apex808,” said Maxon. “[It generates] a transparency, clarity and note-to-note separation so uncanny that it makes other drives sound as if they are being played with a blanket over the speaker.”

TC Electronic’s latest upgrade to the Ditto sees the small-form looper receive a striking new colour display, letting players know exactly how far through the current loop they are. This iteration also sees a newly introduced Extend Loop feature, which lets longer loops be dubbed over shorter ones and Auto Cue, which helps to activate new loops at the right time, rather than relying on pushing the footswitch.

Two of Walrus Audio’s multi-texture reverbs, the Slö and Fathom, collide in this dual-featured Reverb.com exclusive. With both pedals’ circuits integrated in their entirety, double the multi-layered, ambient goodness can be expected when they’re stacked together. Plus, controls for both pedals are featured in full, meaning you’ll find a combined seven operating modes (sub-octave, swell, shimmer, hall, plate, lo-fi and sonar), along with their corresponding modulation controls onboard.

Read our reviews of the Slö and Fathom.

Mooer scales down its flagship GE300 in this Lite edition, but not on its DSP offerings. Onboard, there are 164 onboard effects, 108 digital amp models, built with Mooer’s non-linear amp modelling technology, 43 factory cabinet sims and the full-featured IR loader. Just like its bigger sibling, the GE300 Lite, too, features Tone Capture, which lets players sample and capture their real-world amplifiers, stompboxes, guitars or cabinets as IR files.

The Merlo, from Seattleite pedal builders Korora Audio, is a premium tremolo pedal that employs frequency modulation (FM) to offer a wide and musical sonic palette. Sine, triangle and pulse envelope shapes can be employed to regulate the traditional harmonic effect, and can also be made to continuously morph from one form to the other with the device’s shape knob. Additionally the Merlo’s sports in-depth controls for adjusting its crossover frequency, resonance and filter roll-offs.

Siren Pedals’ Eligos is the brand’s take on the ‘Swedish chainsaw’, the Boss HM-2. This high-gain stompbox is capable of dishing out huge amounts of smooth-sounding gain, with two EQ controls for lows and highs providing additional tone sculpting talents. Other appointments on the pedal include true-bypass switching, top-mounted jacks and a wondrous fantasy trading card game style.

The Engine from DryBell is a fully-analogue preamplifier pedal, featuring two sections, both aimed at delivering touch-sensitive sound. This means that the pedal dishes out more dirt the harder the guitar is picked. In terms of controls, Side A is more features Level, Gain, Tone and Shape knobs, with the Tone control handling the treble side of things, and Shape adjusting m midrange character. Side B is more akin to treble boosters such as the Dallas Rangemaster, with the Range control allowing specific midrange frequencies to be targeted. Additionally, Side B also sports high and low EQ controls.

Coming in as the mid-gain middle child of three new Mesa/Boogie overdrive offerings, the Dynaplex offers British-voiced drive with an emphasis on chirping harmonics and mid-range punch. The pedal is well-suited for the delivery of classic rock tones and equips volume, gain and tone controls, as well as a presence knob for accentuating its top end.

The Vibraslide puts together a uniquely designed hand-blown glass slide – functioning much like an E-Bow – with a pedal controlling sustain and tone, as well as the effects side of things. The pedal’s effects loop allows external pedals to be dropped into the signal path. This for instance, could be used with a wah wah pedal to accentuate the harmonics brought out by the slide.