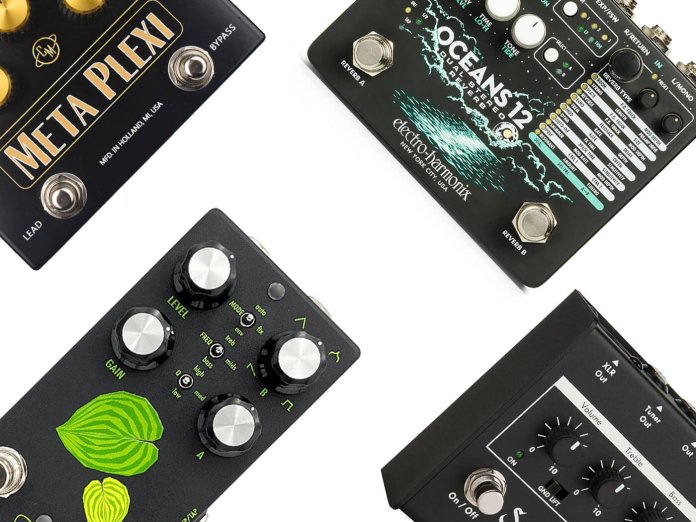 The Noise Reaper is designed for any line level instrument, and is based on the noise gate
Technology found within Stone Deaf’s Warp Drive and Fig Fumb distortion and fuzz pedals. There’s only one control on the pedal (decked in some characteristically psychedelic artwork), a threshold knob that controls how the gate responds to dynamics. The pedal also directly compares your actual guitar signal to any noise you’re trying to kill, so sustained lead notes won’t be inadvertently clamped down on. It can operate either as part of your main pedalboard, or in an effects loop of a noisy amplifier.

The Noise Reaper is available now, and lists for £150 / $160. Find out more at stonedeaffx.com

Flower Pedals’ latest offering, the Hosta, is a wah with a difference. Instead of a foot rocker, the pedal has a standard enclosure, offering various filter modes – but does have an expression pedal input, allowing for use of the pedal as a traditional wah.

The Hosta’s controls let you tweak four parts of the wah circuit: Level, Gain, Frequency, and Q. It then gives you three different modes for controlling the wah: Auto, Fixed, and Envelope. Respectively, these let the frequency filter be controlled either by an LFO, a set knob (or expression pedal) or your playing’s dynamics.

The Hosta lists for $279. For more information head on over to flower-pedals.com.

The core of Seymour Duncan‘s Polaron is a multi-stage analogue filter array, adjustable between 2 and 16 stages, ranging from subtle modulation to more drastic Leslie-esque, flanger, and deep-sweep phase sounds. The pedal resembles less a guitar effect and more the section of a vintage synthesiser, and provides authentic analogue sweeps to match the retro visuals.

While the signal path is 100 percent analogue, the Polaron uses a digital processor to manage its LFO and envelope filters. When operating in LFO mode, the pedal functions like a traditional phaser, with the opening and closing of the filter either set by the rate knob or the tap-tempo footswitch. The amount of modulation is controlled by the depth knob.

In envelope mode, the dedicated sensitivity control will change how much the filter opens and closes in response, while the depth control will set the maximum amount the filter opens. This allows for talkbox-esque and auto-wah settings. Because the controls for the LFO and ENV modes are digital, the Polaron has a bank of presets, recallable using the secondary function of the tap-tempo footswitch.

The Polaron lists for $229. Find out more at seymourduncan.com.

For the collectors, picking up a Way Huge Chalky box should be a no-brainer. This limited pedal comes in a coat of chalkboard paint, and you’ll find in the package a set of chalk – so call it whatever you want, or cover it in your own artistic scribbles.

Aside from the interesting coat of paint, the pedal is internally identical to the Saucy Box – a versatile overdrive pedal with standard volume, drive and tone controls. It uses discrete clean and overdrive signal paths, blended together with the drive control for a responsive, dynamic drive sound, which at lower settings can function like a buffered clean boost, and at higher settings more like a thick amp drive channel.

This pedal sports a slightly larger footprint than most in the Joyo R-Series, but not without reason – a whopping eight overdrive circuits are included in the pedal, all accessible via rotary selector switch. Fittingly enough, the name of the pedal apparently comes from a Chinese legend about eight immortal Taoist warrior gods. The modes range from low-gain, transparent classics to beefy amp-style high-gain overdrive.

All eight are controlled by master volume, gain and tone knobs. Like all of the R-Series pedals, the Baatsin sports some futuristic lighting effects via both a light on the pedal’s face and an acrylic rim between the two parts of the enclosure.

The pedal lists for £64. Find out more at joyoaudio.com.

The unit is a polyphonic octave pedal that allows for octave-up, octave-down or a blend of the two. It iterates on the Joyo OCHO, which was only monophonic, and could only add sub-octaves. There’s also the notable addition of a modulation effect, which blends the octaves for a harmonically-rich chorus effect, which Joyo says will allow for some “impressive polyphonic organ sounds.”

The pedal’s controls are relatively straightforward – there are blend controls for the octave down, the octave up and the dry signal, as well as a control to affect how much modulation there is. This only affects the depth of the modulation, rather than the rate – however, the polyphonic tracking of the pedal should pair interestingly with other pedals.

The pedal lists for £89. Find out more over at joyoaudio.com.

This delay is Mojo Hand FX’s take on the ‘70s classic analogue bucket-brigade delay format. It boils down the standard BBD controls to just three knobs, with the central blend knob functioning as both a mix control and a modulation control.

The delay knob sets delay time, which Mojo Hands FX notes is now ‘almost double’ that of the original bucket-brigade units. The final control manages the delay’s feedback – and at max, will let the pedal descend into oscillation.

The pedal was initially launched as a limited run of 50 numbered pedals, but Mojo Hand FX has relaunched this second batch, now complete with a clearcoated brushed finish.

The Dream Mender lists for $159. Find out more at mojohandfx.com.

This high-gain “amp-in-a-box” pedal from Cusack Music is aimed at providing instant classic drive sounds for any rig.

The pedal’s knobs (and the word ‘plexi’) in its name might tell you all you need to know about the style of distortion this unit seeks to offer – however, the pedal offers some pleasing quality-of-life features.

Firstly, there are two flavours of bias to choose from using the vintage / modern toggle switch. This will change the main distortion sound from a throatier, vintage-styled one to a more scooped tone. Further tweaking is achieved with volume and gain knobs, as well as a 3-band EQ. The pedal’s secondary footswitch engages a lead mode, boosting your signal by either 3, 6 or 9 dB. Combined with a high-headroom clean amp, or a cabinet simulation, this could be used to kick a solo through a band mix. Alternatively, use the extra output to slam into overloaded preamp tubes even harder, blending the pedal’s drive sound with natural preamp distortion.

The pedal’s sound is achieved by simulating classic amplifier designs using FETs, or Field-Effect Transistors, along with some extra circuitry simulating the responsive feel of playing through tubes.

Find out more at cusackmusic.com.

The SPB-1 combines the respected Sadowsky preamp that has been included in every Sadowsky-made bass for the last 25 years and also includes a convenient D.I box, allowing it to be used in front of the amplifier or to connect your beloved bass directly to front of house. Controls are kept to a minimum with a simple three-band EQ of treble, volume and bass, and the treble and bass only work as a boost. Sadowsky claims the SPB-1 Bass Preamp is ideal for upgrading old and/or vintage instruments where you don’t want to remove the original electronics. The best results are achieved with passive basses or circuits with active pickups where you can bypass the active electronics.

The SPB-1 lists for $299. More information at sadowsky.com.

The EHX Oceans 12 is a dual-stereo reverb pedal, with two reverb engines that can be used separately or together. These can also be routed in series or parallel. The different operating modes the pedal offers include Room – upgraded from the Ocean 11’s single-mode Hall – which features two algorithms, modelled after a lively room and a spacious concert hall. In terms of spring reverbs, EHX has maintained the vintage 1962 Fender 6G15 tube reverb emulation, but also added the spring algorithm from the EHX Holy Grail.

Also new to the mix is a Tide Control effect – applicable to all reverb modes – which pans the reverb across the stereo field for a lush sound. Wrapping up the expansive list of available reverbs are Plate, Reverse, Echo, Tremolo, Modulation, Dynamic, Auto-Infinite, Shimmer and Polyphonic.

In terms of I/O, the Oceans 12 can handle stereo in/out or mono send/return – for adding other effects externally – with pre- or post-reverb options. Other highlights on the Oceans 12 include the ability to set up to 24 presets, a Tails switch which determines whether the reverb stops immediately or fades when the pedal is switched to bypass, and an input jack for external expression.

“I played it between two $50,000 guitars, and it held up!” Jason Isbell his new Fender signature Tele, acting for Martin Scorsese and knocking...

Paul Stanley on what makes Billie Eilish’s music great: “This is a real person singing something”