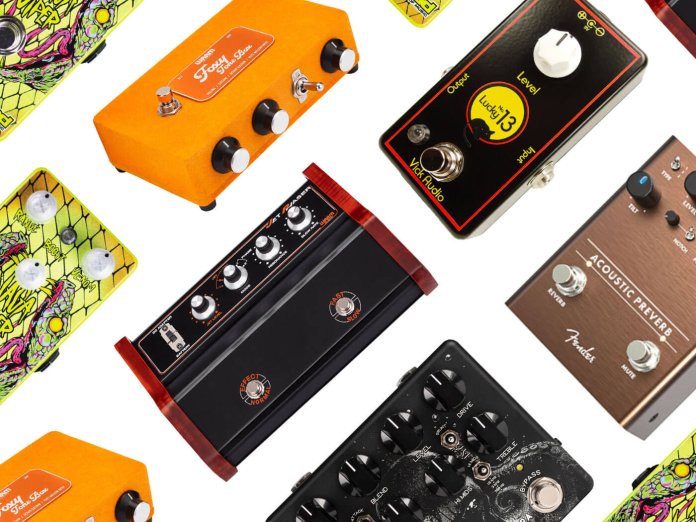 Catalinbread Effects kicked off its new Gallery Series with a limited edition Naga Viper treble booster that features custom art from artist Colin Shawcross. This pedal donates 10 per cent of its proceeds to Shriners Hospitals For Children in Florida, United States. The Naga Viper is the brand’s take on the revered Dallas Rangemaster pedal, and adds two additional controls to the original single-knob boost: Range and Heat. The former lets players adjust the boost’s range from treble-focused to full-range, while the latter offers control over the gain level.

Warm Audio, known for its affordable reproductions of hard-to-acquire studio gear and microphones, officially entered the guitar pedal market this month with two pedals: The Foxy Tone Box and the Jet Phaser.

The Foxy Tone Box is described as a “hyper-accurate” reproduction of the Foxx Tone Machine, a classic fuzz pedal favoured by many rock ‘n‘ rollers of the early 70s. The pedal largely stays true to the original, from its velvet-coated enclosure to its use of NOS Fairchild germanium transistors.

Its control section is identical to the original as well, with knobs for volume, sustain and fuzz – which goes from Mellow to Brite. For squealing fuzz tones, just flip on the octave effect and set the fuzz at high, you won’t be disappointed.

Warm Audio’s take on Roland’s beloved Jet Phaser follows the original closely both in terms of sound, as well as in its retro looks. It gives you six modes: two labelled Phase and four labelled Jet. The latter engage a fuzz effect that helps deliver the pedal’s most extreme sounding effects.

There’s also a resonance control for dialling in a filtered effect; a fast/slow footswitch that can kick the effect’s rate to maximum, and a slow rate knob that lets you mimic the gradual rate change of a rotary cabinet.

Some modern appointments on the Warm Audio Jet Phaser include a standard 18V DC input (PSU included) and true bypass switching. Take a listen to it below.

This special “Squid” edition of Darkglass’ very capable bass distortion comes with custom artwork by Ignacio Bazan Lazcano, allowing you to invoke the wrath of the Great Old One as you play through the Microtubes dynamic saturation circuit. The Squid also sports the same useful I/O as the original, with a quarter-inch instrument input, an aux input for backing tracks, a headphone output, and both balanced XLR and quarter-inch output sockets. Cab simulation is present to make running the pedal directly into a board or interface easier.

Alongside a bunch of other announcements, Fender dropped a quartet of pedals for its summer 2020 lineup of products.

The Acoustic Preverb is a reverb pedal designed specifically for acoustic guitars, featuring three separate digital reverb modes. Some standard reverb features present include Level, Gain, Damping and Time, as well as a toggle switch for selecting the reverb mode. To prevent feedback, there’s a polarity toggle, as well as an optional notch filter to cut out the resonant frequency of your acoustic’s body. For broader EQ control, a single ‘Tilt’ knob has you covered.

Details on this product at the moment are scarce, but we do know that it will feature three toggle switches for some detailed wah customisation. These switches control the mid frequencies, the bypass LED indicator and the pedal’s bypass mode.

Housed in a similar enclosure to the Tread Light Wah, this rocker pedal can operate in both volume and expression modes, depending on which jacks you connect to. A toggle switch lets you choose the operation of the pedal’s LED.

The Trapper Bass Distortion takes after it’s six-string-focused kin, in that it has two separate distortion circuits – much like the first Trapper’s dual fuzz circuitry. The difference here is that the two circuits are stackable, with an independent footswitch for each. Distortion one features the self-explanatory control arrangement of Tone, Level and Gain, while Distortion Two features Tone, Level, Gain, Sub Level and Frequency. Those last two adjust the overall thump and EQ character of the pedal’s sound. Distortion One also provides a crossover blend circuit to preserve low-end clarity and punch, while Distortion Two has more gain on tap than its sibling.

Arriving from pop-punk outfit Knuckle Puck, the 20/20 Overdrive pedal is named after their upcoming album and has been designed in collaboration with Mike Pappalardo of Compendium Engineering.

Tonally, it’s “a transparent overdrive and gain staging solution in one box”, and will allow fans of the band to recreate the “thick, overdriven tones” that are featured on their upcoming record. The pedal features a dual-section design, with independent drive and IC-driven boost circuits.

Vick Audio, known for recreating classic vintage pedals, has reissued its Lucky No. 13 Fuzz, based on the old Colorsound Fuzz circuit from the 1960s. The pedal couldn’t really be simpler, bar the removal of its single knob, which manages the effect’s volume. Other than that, the Fuzz’s gain is managed with your guitar’s volume knob, ranging from crunchy spatter to saturated thickness.

While the guitar edition of the MTX8 comes with a familiarly-voiced preamp section, with Tubescreamer-style clipping, the rest of the unit is very unfamiliar territory indeed. With 8 discrete inputs and outputs, the matrix of ins and outs is connected with pins for on-the-fly switch-ups of your signal routing. Sum 7 pedals together in parallel! Mix guitar and synth signals together! Create a complicated multi-amp loop setup! The possibilities are endless.