From distorted ring-modulation to pitch-drifting stereo delay, these stompboxes will attach rocket engines to your pedalboard and blast it into the next galaxy. Metaphorically. 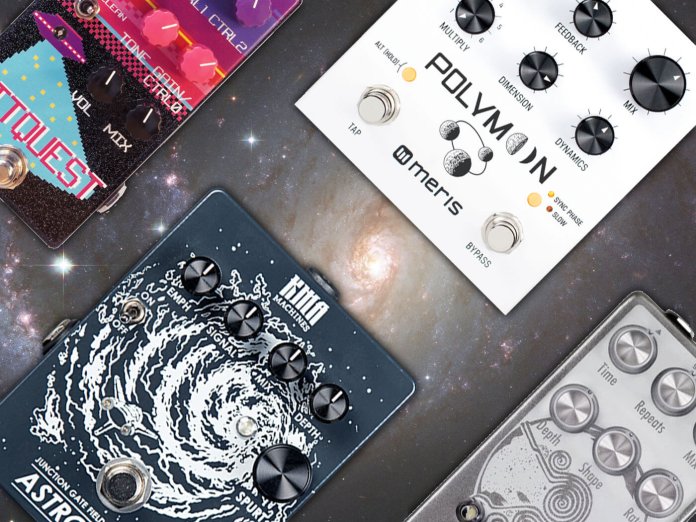 The guitar has never been an instrument closely associated with the sounds of science fiction – the genre’s scores have historically been filled with bold orchestration, synthesiser-driven electronica or a mix of the two. However, thanks to the number of innovative, weird and futuristic stompboxes on the market, all those associations will be lost, like tears in rain.

In space-year 2020, your six-string is more capable than ever of launching you into hyperspace, evoking an endless cosmic void or providing the soundtrack to a bleak cyberpunk dystopia. Here are some of the best picks for conjuring up futuristic sounds from a guitar.

Launched at this year’s NAMM, the Walrus Audio Mako D1 packs in an impressive amount of features for a stompbox of its size. While you can achieve some standard vintage tape echo sounds with it, the modulated delay and reversed delay are of particular interest to those seeking out-there sounds.

An attack knob lets you produce more swell-like, ambient tones by softening the start of each repeat. This has the added benefit of not hiding your dry signal amongst a forest of repeats – which combined with the stereo nature of the pedal, means the Mako offers up a lot of space without taking up too much, well, space.

Perhaps the quickest route possible to electronic sounds, the Boss SY-1 transforms your guitar into any one of 11 synth types, each of which has 11 variations for a grand total of 121 analogue-style synth sounds. There’s a number of lead sounds for imitating a keyboard solo – as well as pad sounds for spacey ambience. Its accurate polyphonic tracking will ensure the harmonic character of your playing doesn’t get lost in the conversion from guitar to synth, and also allows for more expressive playing.

The SY-1 is of course all packed into Boss’ compact pedal enclosure. So you’ve got plenty of room to combine it with other effects for even more out-there results, if over a hundred synth patches just aren’t enough.

Ring modulation is a hard effect to use well – its inherent oscillation can lead to an abrasive, unclear tone. But for evoking the last signals of a dying satellite, or the strange chirps of a retro computer, it’s pretty hard to go wrong with a ring modulator. The DOD Gonkulator comes with the added benefit of containing a regular distortion circuit – allowing for a quick change between oscillated weirdness and a more traditional driven sound. Alternatively, blend the two to taste.

Like most Meris pedals, the Polymoon begins to blur the line between pedal and instrument.

The stereo delay engine’s max time is a healthy 1,200ms, more than enough to get a real sense of space, even when using it as a regular delay. But things start to get interesting with the multiply and dimension controls. The multiply control bounces specific repeats back and forth between the left and right channels, while the dimension introduces some strange regeneration effects – your playing begins to collapse, before returning from audio-obliteration almost unrecognisable.

For even more sonic strangeness, you can even modulate certain repeats differently depending on their dynamics. Rising and falling pitch effects can either evoke crystalline shimmering or a chaotic ascent into the sky. The result from all of this is a sound that feels very alive, responding to your playing in many different ways. And, like the Mako, the introduction of stereo audio means you can achieve a more immersive, dreamier sound.

Of particular note for this list are the bit crusher, reverb and ring modulator effects. The bit crusher reduces the sample rate of your digitised signal, resulting in distortion that evokes old computer hardware, perfect for adding a robotic edge to your tone.

The reverb is described by Dr Scientist as ‘infinite,’ and while that’s a bold claim, demo videos will show that you can leave the pedal running without a new note indefinitely. Unlike a freeze/sustain pedal, however, the reverb will change and degrade, resulting in a shifting, ambient soundscape.

The ring modulation found here is particularly layered and strange-sounding, and its frequency setting (controllable by an expression pedal) gives off some distinctly oceanic ambience.

The other settings still offer up their own set of unique sounds, such as the ‘glitched’ delay – so the Bitquest is an easy route to turning your guitar signal into something very futuristic. Each patch changes the operation of the three ‘CTRL’ knobs, and can be loaded in either clean or fuzz mode. If connected, an expression pedal will replace CTRL1.

Again, a difficult one to avoid talking about when it comes to spacey effects. Astronaut artwork aside, the EarthQuaker Devices Space Spiral lends itself to shimmery, modulated echo – after the standard controls of time, repeats and mix, the pedal offers up three controls for its versatile pitch LFO: depth, shape and rate. The depth ranges the tone from subtle modulation to over-the-top warble. The shape lets you have the LFO work in a smooth triangle-wave, or a choppy square-wave. And finally, the rate knob allows for wide sweeps or helicopter-esque wobble.

Essentially, the space spiral can either add a subtle, modulated depth to your delay arsenal, or completely shake your tone apart – it’s up to you.

The Collision Devices Black Hole Symmetry collects three effects into one enclosure: fuzz, delay and reverb. The time-based side of things offers up some oddness – the reverb can warp the signal in pitch, up to a fifth. Its decay also approaches almost infinity as you turn the knob to max. The delay is a modulated one, and excels in sitting on the balance between disintegrating into complete oscillation and keeping the repeats tangible.

For a more abrasive edge, the fuzz section is simple: one knob for gain. Each section of the pedal has a separate footswitch, and has its controls mapped on the pedal according to its name. The delay is named after the area surrounding a black hole, hence its controls skirt the edge of the pedal. The reverb is named after the event horizon, or the edge beyond which there is no turning back – and so its controls form an inner ring. And finally, the fuzz’s one knob acts as a singularity – one central point in the middle of it all.

In all, then, both aesthetically pleasing, and sonically interesting.

Lists for €299. More information at collisiongears.com.

An essential aspect of science fiction is, of course, imagining the technology of the future. And whatever instrument the Dwarfcraft Grazer makes your guitar sound like, it certainly hasn’t been invented yet. It works by taking tiny slices (grains) of your playing, repeating them, looping them, playing them backwards, pitch-shifting them – landing somewhere in between a freeze, a looper, a reverse delay and a harmoniser. The sample length is also adjustable with the ‘size’ control, or an expression pedal. The end result is choppy, glitchy, and pretty much like nothing else.

Not just here because of its artwork – the Astrospurt offers a new spin on the four-stage JFET phaser model. While the signal, mix and depth controls are standard fare, the on/off switch on the left of the pedal lets hear what KMA Machines calls “the secrets of the black hole.” The ‘emph’ and ‘spurt’ controls will set the engines off, and push everything into stranger territory.

KMA also notes that the pedal pairs particularly well with drive, leading to synthetic, metallic sounds when pushed by a distortion or fuzz. It remains unclear how to set it to ‘stun,’ but nonetheless, the Astrospurt is a great acquisition if you’re looking for sci-fi oddness. 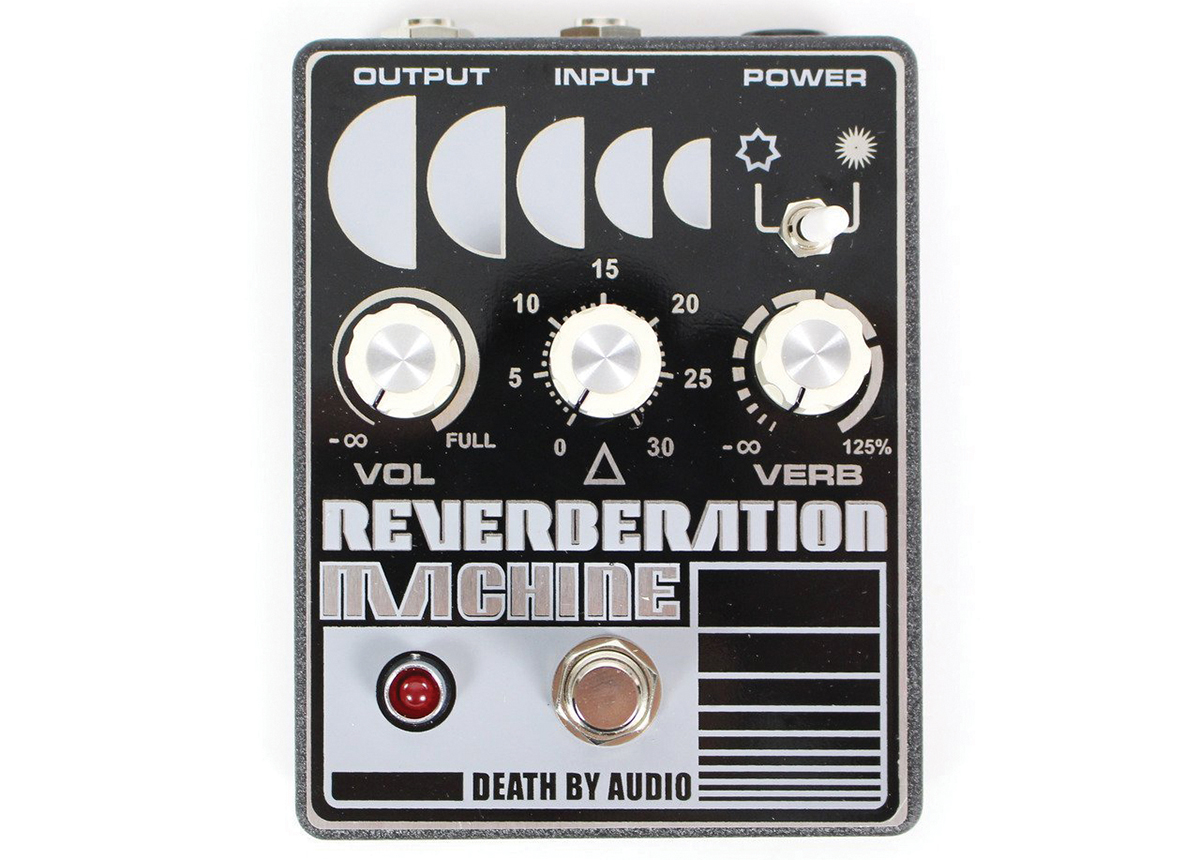 Williamsburg, NY effects maker Death By Audio’s entire product line could be featured here – but we’ve singled out the Reverberation Machine for its uncanny ability to add an inspiring sheen of ghostly shimmer and ethereal ambience to any guitar part.

It does this via just four basic controls (volume, altitude, reverb tone and bright sun/dark star modes); the altitude control alters the reverb’s gain and can generate a range of tones, from barely perceptible smooth sheen to crunchy and destructive echos.

It’s also capable of sweeter sounds as well as white-noise drenched atmospheres – this is a very musical-sounding tool and a dream ticket for any knob-twiddling reverb junkie. 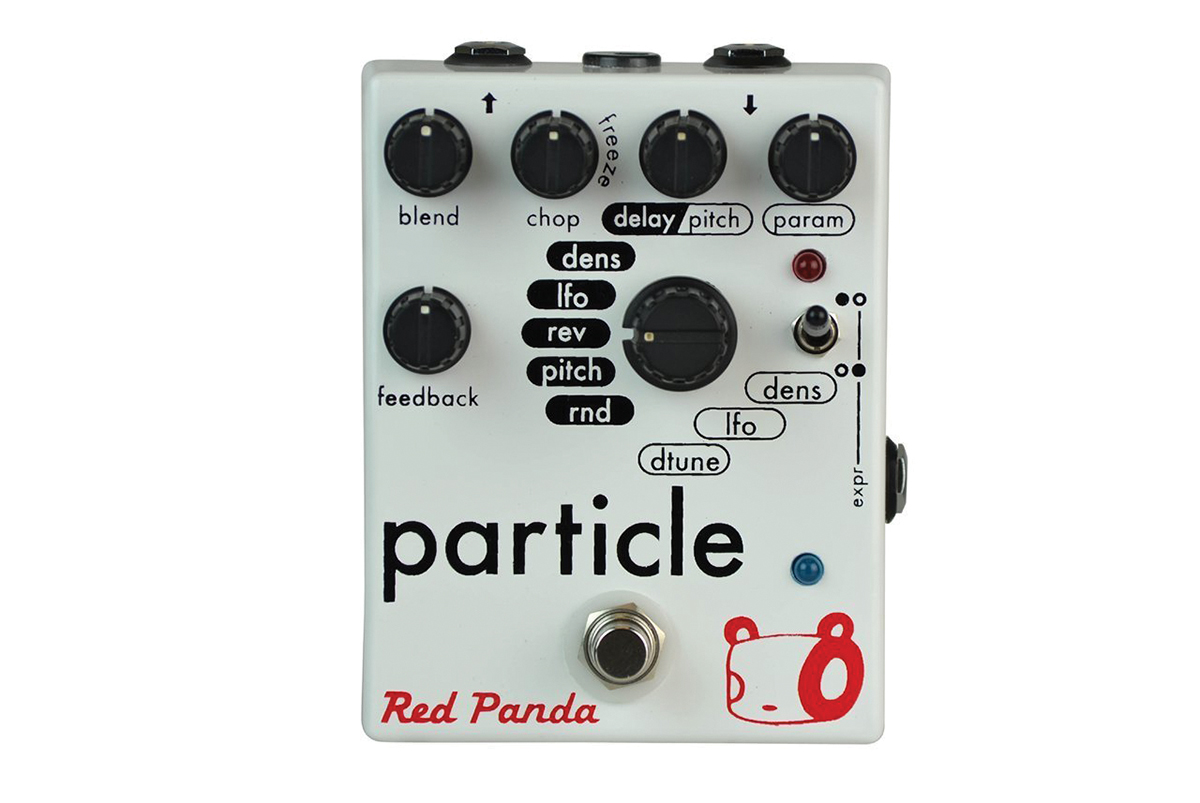 The Particle takes your guitar signal, chops it up using the techniques of granular synthesis in real-time, then does a range of what Red Panda terms “trippy, robotic things” to it. It creates interactions between three pitch modes – detune, density and LFO – and five delay modes – random, density, LFO, random pitch and reverse.

These then act on the grains, whose size you can also adjust, and the resulting sounds can fall anywhere from modulated delay shimmers to reverse and stutter effects, to extreme glitchy rhythms, to indescribable, kaleidoscopic pitch-shifted alien modulation patterns… It’s an extremely powerful and endlessly creative toolbox.

Lists for £279. More information at redpandalab.com. 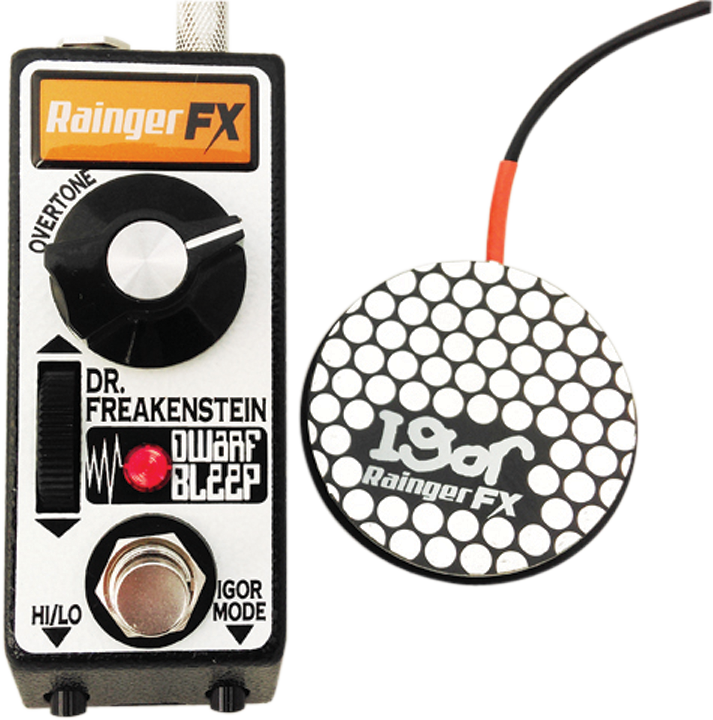 There are plenty of futuristic fuzzes, but the Rainger FX Dwarf Bleep is different – mainly because of Igor, a mini pressure-operated foot controller that has two modes, both of which produce futuristic sound-mangling results.

The main chassis (tiny, with entirely top-mounted sockets) has a volume thumbwheel, a footswitch for toggling hi or lo intensity mode and a dial to control the harmonic overtones of the fuzzy distortion.

Lists for £99. More information at raingerfx.com. 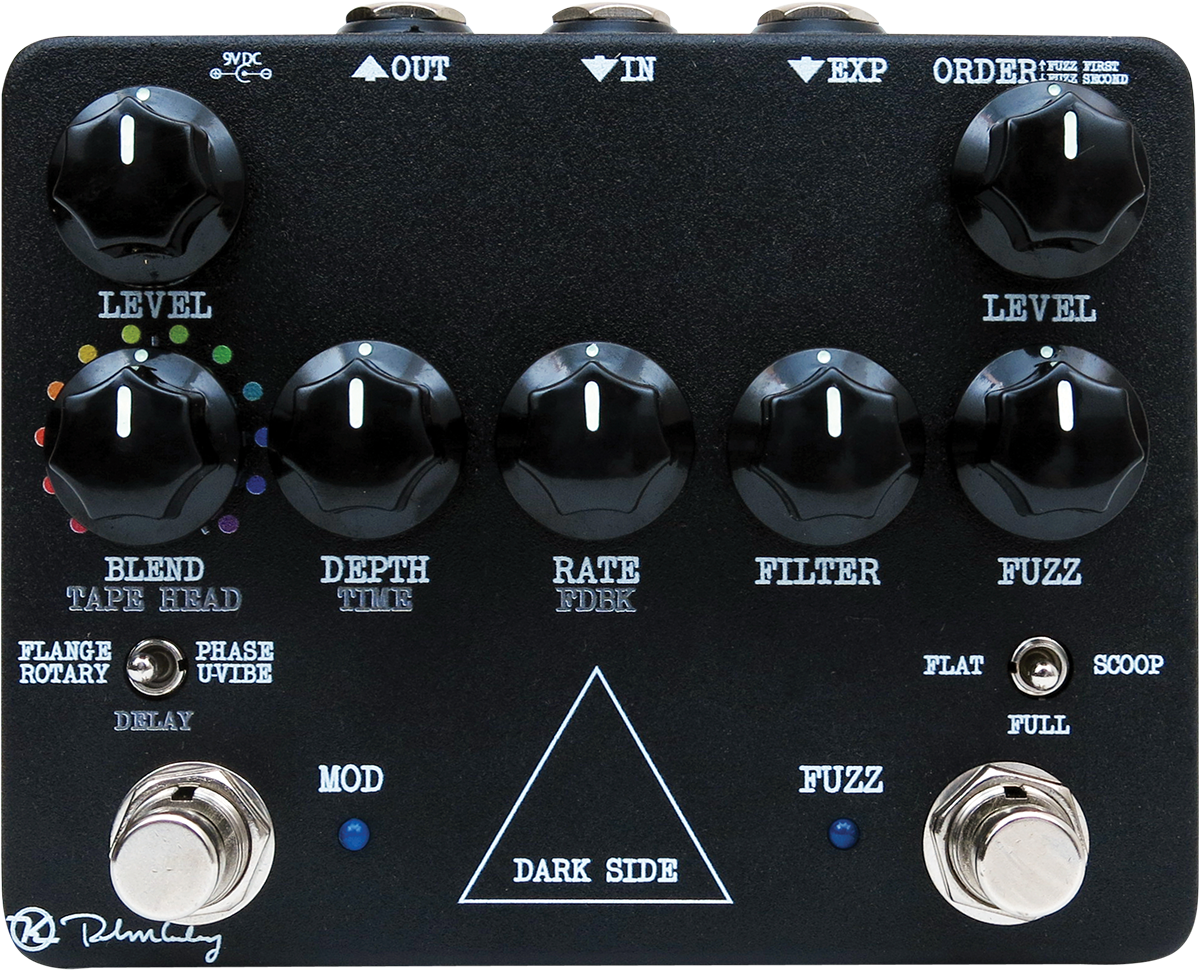 Across Dark Side Of The Moon, Wish You Were Here and Animals, Pink Floyd’s David Gilmour soundtracked 70s sonic space exploration with a variety of signature sounds based on a shedload of effects units – and, of course, his inimitable touch and tone.

Robert Keeley’s latest artist-based multi-FX unit promises to place Gilmour’s sounds at your fingertips, via the Dark Side – effectively a two-section pedal with fuzz on one side and modulation/delay on the other.

The fuzz presents a range of Big Muff-style tones with a three-way midrange EQ switch for variety. The modulation consists of emulations of signature Floyd effects – flanger, phase, rotary and U-Vibe – and 12 different flavours of Binson Echorec-style tape delay.

Lists for £299. More information at robertkeeley.com. 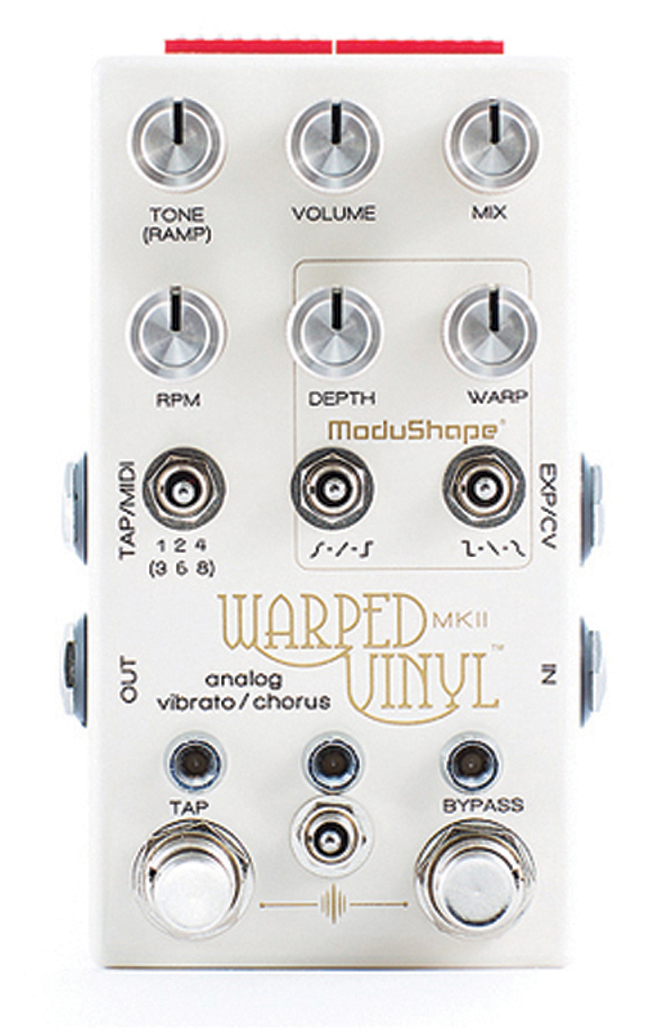 Boasting an all-analogue signal path, a quiet circuit and ‘true pitch’, this Chase Bliss Audio pedal offers comprehensive digital control over vibrato and chorus sounds, as well as the ability to save settings and alter the shape of the modulation waveform.

A ramp control modulates every other parameter over time – and a series of DIP switches on the top of the unit enable you to choose which parameters are affected, turning them on or off, or enabling them to rise or fall.

This results in a library of unique modulations, warbles, gargles and pitch-based effects, as well as fully controllable versions of classic vibrato and chorus effects into the bargain.

Lists for $349. More information at chaseblissaudio.com 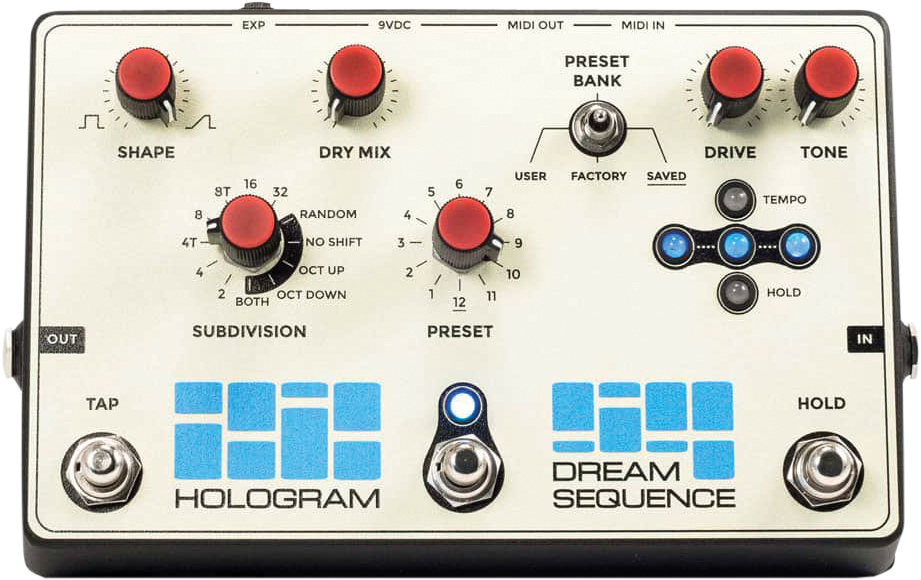 Octaves, envelope filtering, sample and hold, arpeggiation and sequencing combine in the Dream Sequence, the debut pedal from Knoxville’s Hologram Electronics. The Space Age-style chassis houses a range of preset octave up and down sequenced patterns, with additional control over pitch-shifting and rhythmic timing, the shape of the ADSR envelope and much more.

It has expression pedal and MIDI control and you can record and save sequences – basically, it’s an effects unit that blurs the line between programmed-sounding sequences and instant guitar-effect gratification.

The company’s Infinite Jets – a four-in-one resynthesiser pedal – is an altogether more direct and glitchier affair, but the Dream Sequence is just the job for everything from hallucinatory frozen chords and atmospheric drones to rhythmic, synth-like arpeggiation and creative modulations.

Lists for $425. More information at hologramelectronics.com.