10 of the best guitar pedal collaborations

We look at some of the best guitar pedals that came a result of two or more designers working together on a stompbox. 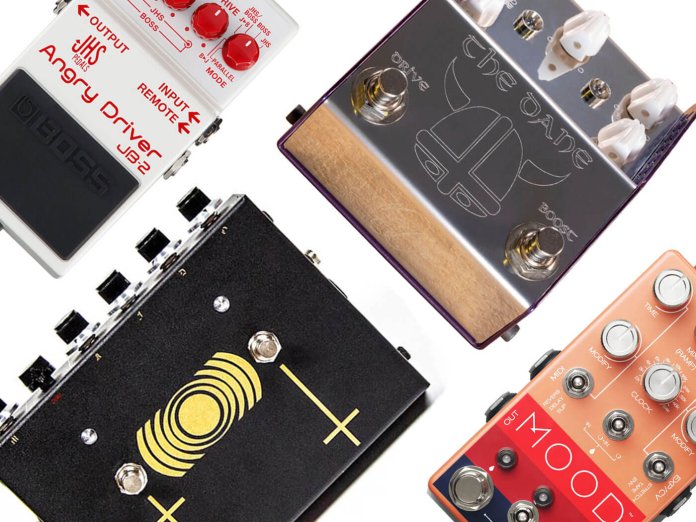 David Bowie and Bing Crosby. Carlos Santana and Rob Thomas. Lil Nas X and Billy Ray Cyrus. Musical collaborations can lead to great things – but what about for the world of gear? Collaborative guitar pedals can let artists put their own creative spin on an effect with the help of an experienced builder, or they can bring together the best aspects of different builders for a stompbox that’s far greater than the sum of its electronic components. Let’s take a look at ten of the best collaborative guitar pedals. A lot of these have been released as limited runs, so acquiring them might take some hunting around for a second-hand unit – but the results will be more than worth it. 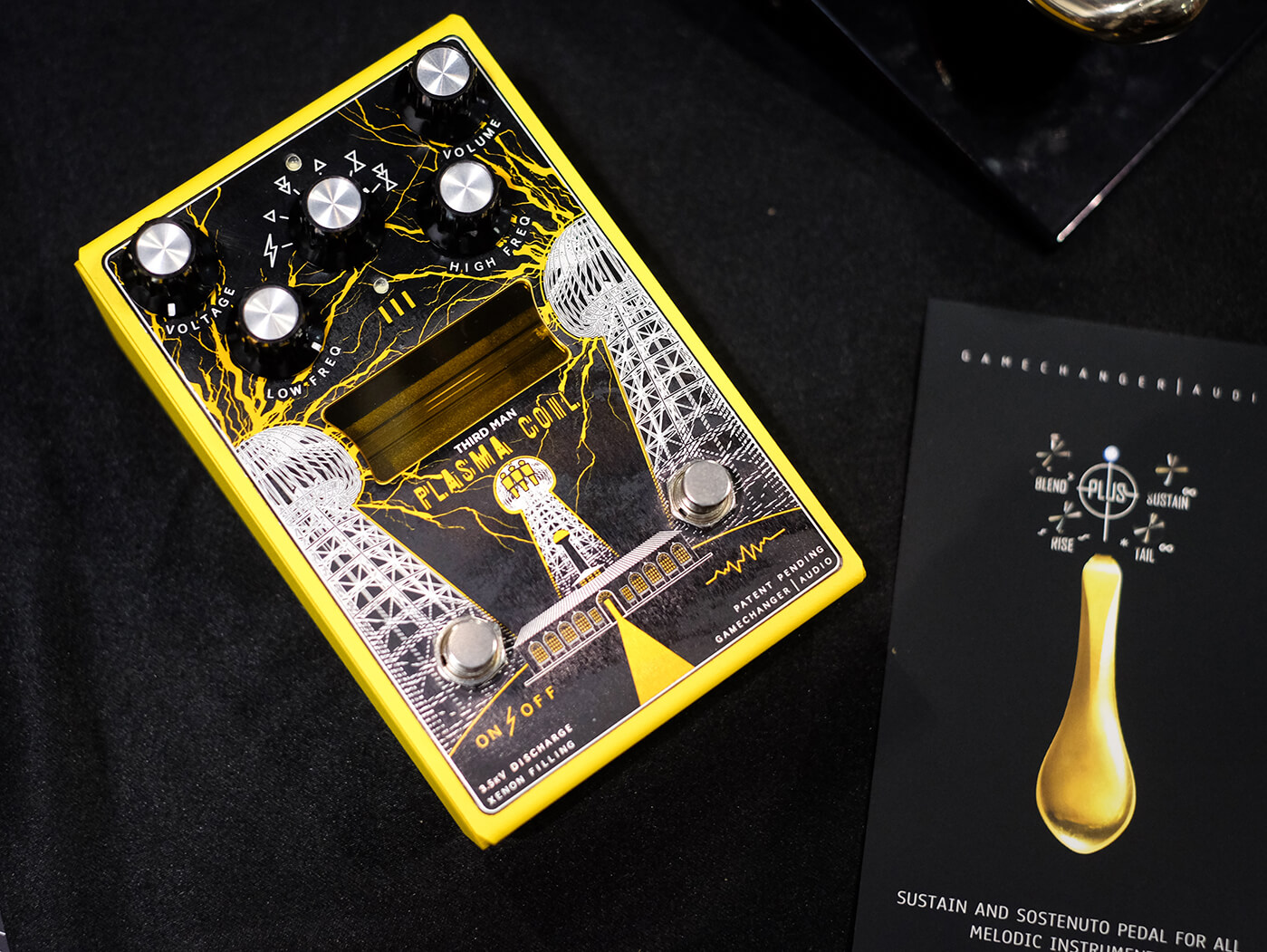 Jack White’s Third Man Records was started all the way back in 2001, with the mantra “your turntable’s not dead.” White’s love of audio-experimentalism and ear-grabbing guitar tones means that this collaboration with the mad-scientists of the pedal world, Gamechanger Audio, comes as no surprise.

The Plasma Coil builds on Gamechanger Audio’s Plasma Pedal, a glitchy distortion-fuzz-something-or-other. The plasma coil works on the same principle as the Plasma Pedal: your guitar signal is amped up, then discharged through a xenon-filled tube. The visuals of its operation are impressive enough, with bolts of electricity shooting across the pedal as you play – but the resulting sound is an incredibly unique, glitchy drive sound.

For the Plasma Coil, the Plasma Pedal’s blend knob has been replaced by a secondary effects section – an additional footswitch allows either latching or momentary engagement of some extra flavour. Unsurprisingly for those familiar with Jack White’s penchant for octave effects, these include various blends of different sub- and upper-harmonic voices. The pedal itself was used extensively on the Racontouer’s latest LP Help Us Stranger.

‘Tube Guru’ Bruce Egnatoer is best known as the founder of Egnater Amplifiers. Its flagship Tweaker, as the name implies, lets you switch between various flavours of classic tube amps – squeezing out British bark, stateside chugs and anything in between from the amps’ valves.

Who better, then, to collaborate with Fender on the MTG Tube Distortion. At its heart is a New-Old-Stock US-made 6205 preamp tube, running into an original circuit design, allowing for that flat-out tube-distortion sound without having to receive too many noise complaints from your neighbours. Eight discrete LED-backed knobs five you the fine control you’d expect from an Egnater project – including a ‘tight’ knob for fine control over your tone’s low-end. A separate boost section also means you can use the MTG Tube Distortion to drive an amp’s front end even harder.

Sunn O))) have a unique approach to sound and tone. They eschew percussion almost entirely, their music instead consisting of overwhelmingly loud guitars moving between down-tuned chords at glacial tempos. But it’s not all doom and gloom for Sunn O))), despite the robes: their latest full-length record, Life Metal, is so titled after the positive, meditative state the band enters when recording and writing. There’s something calming about hitting a chord and hearing it ring out for the next five minutes – especially when it’s loud enough to make your teeth vibrate.

The Life Pedal is a collaboration between Sunn O))) and Earthquaker Devices. The pedal brand combined the RAT-esque distortion with an octave-up fuzz, and several different clipping modes – all based on the guitar tones achieved by recording legend Steve Albini on the band’s recent records Life Metal and Pyroclasts. The result is a guitar tone that could chop a mountain in half, packed full of harmonically-saturated overtones and deep, throaty distortion. The pedal certainly offers the sustain required for endless drones, but it’s also usable in a number of other settings that require maxed-out overtone-loaded punch. Version two of the Life Pedal follows a more traditional Earthquaker design route, and lets you control the octave blend with an expression pedal.

Pete ‘Danish Pete’ Honore has made his name as one of the best players of a purple Telecaster on the Andertons YouTube Channel – and in general, of course. His tasteful blues skills on display in his frequent jams with Lee Anderton elevate the gear demo format to another level.

The Dane is Pete’s collaboration with British pedal brand Thorpy FX. It offers a restrained amount of gain with its overdrive channel. Its boost channel, however, runs before the drive – meaning you can run the boost into the drive for a tone that balances articulation and sustain. The EQ section is similarly tuned to Danish Pete’s choice of gear – a tone knob functions as one might on many a classic overdrive, but a separate lows knob means you can either clear up a muddy signal or thicken the bottom-end of a single-coil.

Brad Paisley’s first signature overdrive with Wampler, the Paisley drive, was a short-lived but highly-praised unit, with an articulate mid-focused drive sound that could still get rowdy at higher gain settings.

Paisley convinced Brian Wampler to revive the discontinued pedal in this deluxe version. The dual pedal combines the transparency of the original unit with the slightly woollier sound of a Wampler Underdog, with more than enough controls to tweak each side of the pedal to perfect taste. While the ‘transparent’ overdrive sound is often highly sought after, sometimes you just need a bit more grit to your drive – and the Paisley offers the best of both worlds.

Land Devices and Farm Pedals worked together on this fuzz unit with a true no-nonsense approach. Based on the Selmer Buzz Tone circuit, the No Masters’ two knobs allow for control over volume and voltage, and a rocker switch lets you choose between overdrive and fuzz. Dropping the voltage lets you travel back to the days of 3.5v fuzz pedals, to a more modern 9v setting at maximum. The germanium transistors mean the drive on offer here is full of character, with an angular honk that echoes pedals such as the Harmonic Percolator.

Thee Oh Sees frontman John Dwyer’s guitar tones leap from the record fully saturated with psychedelic excitement. He’s known for using a transparent, aluminium neck guitar, achieving a bright, glassy sound that’s incredibly unique. So a collaboration with Death By Audio, whose pedals already push boundaries, seemed natural. Thee Fuzz War Overload adds a treble boost circuit, lending that jagged edge to a fuzz that helps it cut through a mix, as opposed to sink into muddiness. The core fuzz sound is still the maxed out, explosive tone of the original, somewhat reigned in by gain, level and tone knobs.

JHS Pedals’ collaboration with Boss, the Angry Driver, is the concept of a collaborative pedal distilled down to the basics. Packed into a standard Boss Enclosure (but with JHS’ style of knobs) is both the JHS Angry Charlie and the Boss BD-2 Blues Driver. Both great overdrives in their own right, the Angry Driver lets you blend the two to taste in either series or parallel, and uses Boss’ concentric knobs to retain full control over each pedal without an enclosure that takes up half your ‘board. Because there are two drive pedals in here, the Angry Driver is capable of running as a light boost to an all-out stacked distortion – and an external remote lets you switch channels on the fly.

Sleep and High On Fire’s Matt Pike pioneered what fuzz could achieve in the 90s – from recording an hour-long song to unashamed Black Sabbath evangelism, Pike’s playing pulls no punches. His collaboration with Black Arts Toneworks, the Rabid Mammal, offers two circuits – boost and fuzz. Similar to Thee Fuzz War Overload, the boost circuit focuses on the treble and upper-mids to add some clarity to the fuzz’s saturated sludginess.

The collaboration between Pike and Black Arts Toneworks is ongoing – a recent run of Green Limited Edition pedals was designed around the tones Pike used on the recent Sleep tours (in support of 2018’s The Sciences) – forming the basis for version two of the pedal, currently in development.

Overall the pedal comes together as ambient playfulness distilled into a single enclosure, letting you record a loop, stretch it out, run it through reverb and delay, then freeze it all or smear it to a different tape speed. There’s also various internal routing options, as well as Chase Bliss’ signature dip-switch array for endless tweaking.