Our conversion of the movie-projector amp gets underway, and we show you how to get a vintage amplifier up and running safely. 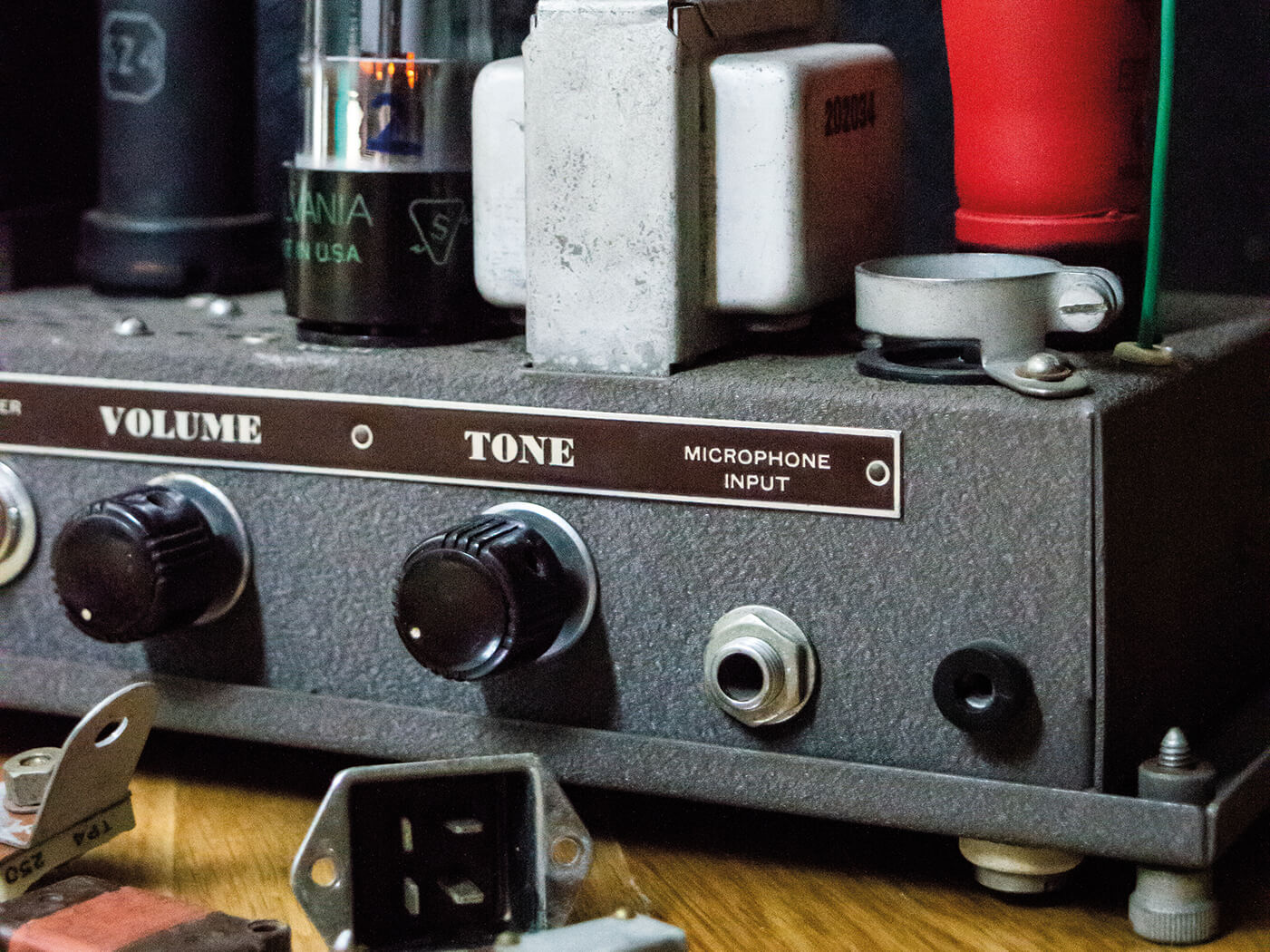 My interest in valve electronics began with hi-fi amps rather than guitar amps and the first was a Leak Stereo 60 that I bought ‘as seen’ for £25. Barely out of my teens, I was so excited to hear it, I hooked it up to my parent’s hi-fi speakers, plonked it on their living room carpet and flicked the power switch.

Almost instantaneously, there was a loud bang, followed by a white mushroom cloud forming over the chassis. With my heart in my mouth, I disconnected the amp from the mains and lifted it off the carpet. Fortunately, the carpet and speakers were undamaged, but there were fragments of oily paper from the exploded capacitor all over the place. The lesson I learned was never to power up an untested valve amp in such a gung-ho way.

So, then, what needs to be done before any long-neglected valve amp can be switched on and used? Some of the information that follows is specific to Filmosounds, but the general principles apply to any untested vintage amp, completed restorations and even newly built amplifiers.

Due to the absence of an IEC socket, or indeed a flying mains lead with a US plug on the end of it, a bit of modernisation is the first order of business. There is some initial confusion, however, since Filmosounds have four-pin power sockets rather than the usual three-pin sockets. Consulting the circuit diagram doesn’t help me, so I turn to Chris Fantana of Rift Amps for advice.

I learn that it’s called a Jones socket and that the extra pin allows for the projector lamp voltage to be controlled independently. Chris suggests that the yellow lamp voltage wire connected to pin three of the Jones socket should be disconnected and isolated.

It’s becoming obvious why the wiring is described as a ‘rat’s nest’, and things are particularly cluttered around the Jones socket. Since most of this wiring is used for an inductor that would have been used for movie soundtracks rather than external audio input, I decide to strip it out, to ease access to the mains input and power-supply wiring.

Everything comes out easily and I follow Chris’ advice on isolating the extra wire before removing the capacitor and the Jones socket. The chassis hole for the Jones socket is an inch square, which is sufficiently tall, but insufficiently wide for a modern IEC socket.

I widen the hole with a file by about 3mm and the IEC socket slots right in. Two new holes are drilled in the chassis to bolt the socket in place and I take care to reinstate the ground pin that was previously secured to the chassis by one of the Jones socket fixing screws. The ground, power switch, fuse and neutral wires are soldered onto the new socket and the mains-wiring update is complete.

Valve amps cannot be safely powered up without a speaker or dummy load of the correct impedance connected to the output. Since the Filmosound’s archaic two-pin sockets will never be practical, I remove them and install regular mono jack sockets instead.

Each of the original sockets is mounted onto the chassis with two brass rivets. Soft brass means it’s easy to drill the rivets out and, once all the wires are de-soldered, the sockets are removed to reveal two holes in the chassis.

Unfortunately, the diameter is far too wide for regular jack sockets and washers, so I use a 20mm washer with a 10mm centre hole on the inside and outside of the chassis. With the socket nut tightened, the washers cover the holes and clamp the chassis for a secure fixing. After re-soldering the speaker output wires – along with the negative feedback wire that’s attached to the positive tag of the 16-ohm output – attention turns to the transformers.

There are some tests you can run to determine whether a power transformer is in good enough condition to be connected to mains voltage. The first is a continuity test, with multimeter test wires connected to the live and neutral connectors of the IEC socket.

So long as the power switch is in the on position and the fuse is working, you should get a loud beep from your multimeter. If you don’t, then check that the fuse and the switch are both okay. My reading fluctuates between 5 and 9 ohms, which confirms the primary is okay, but suggests that the power switch contacts may be oxidised. I install a replacement to fix the issue.

On the output transformer’s primary side there are three wires, one each for the power tube plates and a centre tap that’s connected to the power supply. In this case, the centre tap connects to the junction of the two dropping resistors that are soldered to the big multi stage filter capacitor, while pin three on the valve sockets corresponds to the 6V6 plates.

Setting the multimeter for its lowest resistance range and measuring between the centre tap and each of the plate wires, I read 239 ohms and 219 ohms. The transformer isn’t perfectly balanced, but it’s close enough. I also measure for resistance between the two wires of the secondary coil and ground. This time I read 4 ohms on the 16-ohm output and 3.7 ohms on the 8-ohm output. Next, I connect the test leads to one of the secondary wires and the primary centre tap, and ramp up through the multimeter’s various resistance ranges. Even at the highest setting, you should get no resistance reading at all.

If any of these transformer tests produces unexpected results, the transformer should be sent to a specialist to be checked over and repaired before you power up the amp. Attempting to use a failing output transformer can potentially send HT voltage to your speaker and you’ll end up paying for a speaker repair as well as a transformer rewind. Faulty power transformers could cost you a lot more than a speaker repair. None of these transformer tests guarantee that everything will be fine, but they can flag up certain issues and it’s always best to glean whatever information you can about transformers before you flip the power switch. On balance, I’d rather discover a transformer is broken by using a multimeter rather than watching an indoor firework display.

With the mains connections updated and made safe, and both the transformers tested, I can soon try powering up the amp. Before I do this, though, I want to check the capacitors. Problems with big multi-stage filter capacitors, such as the Filmosound’s, are often visible. Look for blistering and evidence of electrolyte fluid having leaked out. If you see either, the capacitor should be replaced before powering up. I also use a capacitance tester, which measures the actual capacitance value and gives an ESR (equivalent series resistance) reading to determine if the capacitor is leaky. The device tests at low voltage, so it can only identify capacitors that have completely failed, rather than those that are beginning to fail. Ideally, capacitors are tested with one leg detached from the circuit, but that isn’t always possible.

Here, the advantage of having two identical amps pays off. In the amp I’m working on, the 6V6 cathode-bias bypass capacitor reads leaky, but the same capacitor in the other amp reads just fine. The reason is that the bypass capacitor is wired in parallel with a 250-ohm resistor, which is sufficiently low for the meter to see it as a leaky capacitor.

I detach the positive wires from the capacitor to test again. Once properly out of circuit, the capacitor appears to be fine, so I reconnect the wires. The reason the capacitor reads ‘good’ in the other amp is that the 250-ohm cathode-bias resistor has gone open circuit, so that will have to be changed when the amp is being restored.

The fuse value is the final thing to check, and it’s vitally important – because it’s there to protect you and the amplifier. I’ve already established that there’s electrical continuity across the fuseholder, so now I have to check that there’s actually a fuse inside and that it’s the correct value. It’s not unheard of for fuses to be replaced with paper clips, foil wrappers, nails and so forth – all evidence of long-forgotten mods to get faulty amps ‘working’. Fuses are rated in amperes and they’re designed to blow when an amplifier’s current draw becomes excessive. But what exactly is considered ‘excessive’?

Most modern amps will have a label next to the fuseholder stating the recommended fuse value. Failing that, you’ll find the value in the instruction manual. Although I have a circuit diagram for the 621 Filmosound, the quality is poor and most of the values are illegible. Diagrams for similar-spec US built Filmosounds generally specify a 2A fuse. The one in this amp is 1.5A, so I decide to leave it in there while powering up.

I plug the Filmosound into a 110V step-down transformer, which is connected to a lightbulb current limiter. The amp is connected to an 8-ohm dummy load, first switched on with no valves inserted and then switched off after a few minutes. The process is repeated with the rectifier valve, followed by the power valves one after the other and so on, until the full valve complement is in place.

Throughout the process, I’m looking to see if the lightbulb glows brightly. If it does, it means that something in the amp is drawing excessive current and it should be turned off immediately. All goes well and, with all the valves installed, the lightbulb emits a very dull glow. It’s time to connect the amp to a speaker.

The Filmosound is working… well, sort of working. It passes signal and the full and clear tone is encouraging, but it’s also very noisy and I can see an orange blush inside the 6V6s after the amp has been on for a while. I’m reasonably certain it’s being caused by leaky coupling capacitors from the phase inverter.

This is not unexpected, so I replace them and, as a precaution, I replace the capacitor coupling the EF37A plate to the scratchy and noisy volume control. The blushing and scratchy volume-pot issues are remedied and with the volume right down, the amp produces barely any background noise.

That changes as volume is increased, so I’m fairly confident that the filter caps are okay and the noise originates in the input stage. The amp also begins squealing quite abruptly as the volume control approaches maximum.

Research indicates these things are all part of the Filmosound repurposing experience and I’ll address the issues in the next instalment before getting into some further modificiations and upgrades.