DIY Workshop: How to convert a Telecaster into an Esquire

Is less really more? We’re testing the theory by converting a T-style partscaster into an Esquire with the Eldred mod. 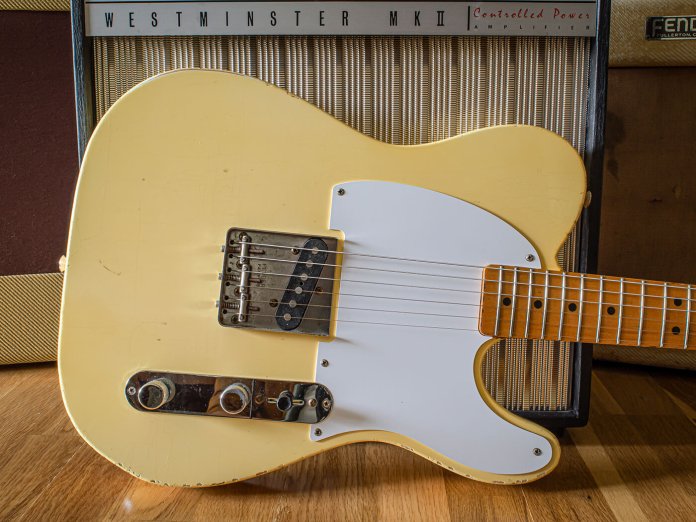 If funds are tight and you need a high-quality bolt-on guitar, a partscaster could be a great option. They are relatively easy to assemble and, if you’re lucky, you may find a pre-built one that has plenty of genuine Fender parts. This one was discovered a shop in Cardiff and it has a Fender neck with a nitrocellulose finish and a 1950s-style decal.

The ash BCG body is an aftermarket item, but it’s light and also has a nitro finish. I think the bridge and bridge pickup may be Fender items too, and the controls include an Oak Grigsby switch and a pair of CTS pots. With a set of Kluson-style Gotoh tuners also included, it’s clear that whoever assembled this guitar didn’t compromise on parts.

This guitar has already had a 57 Classic humbucker fitted in the neck position, but the its new owner is more Billy Gibbons than Keith Richards and wants to convert it to a 1957-style Esquire. I’ll be making quite a few modifications and trying out a slightly different wiring scheme that should transform the front position tone into something very distinct and useable.

Telecasters are simple to dismantle. I always begin by removing the controls, which requires desoldering the pickup wires – two hot connections on the switch and two ground connections on the volume pot casing. You can disconnect the output wires at the socket end, but if you’re working on a T-type guitar with a vintage-style socket cup, I strongly recommend leaving it intact and desoldering the wires from the volume control.

Traditional Telecaster sockets can be very tricky to install and even trickier to reinstall. In fact, you can even buy specialist tools for the job. Fortunately, this guitar has a modern Electrosocket-style mount, where the socket screws into the cup and two screws fix the cup onto the body.

With the control assembly removed, I ditch the strings and detach the bridge by removing the four fixing screws behind the saddles. Just be careful when you’re lifting a Tele bridge off to feed the pickup wires through the drilled hole linking the pickup rout to the control cavity, rather than tug at the bridge. The humbucker is pickguard mounted, and both lift straight off.

Because the owner has asked me to do a bit of relic’ing, I remove the tuners but not the bushings and, with the neck still attached to the body, the guitar gets three freeze and thaw cycles in my deepfreeze. After enhancing the checking lines with some stain and adding some chips and dents, the guitar is ready for reassembly.

Some purists might disagree, but with standard Esquire wiring, the front position is so lacking in treble and clarity that most players find it unusable. Former Fender Custom Shop head honcho Mike Eldred devised a wiring mod that’s popular amongst Esquire fans because it gives the front position a very useful cocked-wah type tone, while retaining the Esquire’s traditional middle and back settings. For the uninitiated, the middle position has the pickup connected to the volume and tone controls, and the back position keeps the volume connection but disconnects the tone.

I won’t dwell too much on the details because you can watch me wire up the controls in the video that accompanies this article and wiring diagrams are easy to find online – the one I’m using comes from sixstringsupplies.co.uk. I’m retaining the three-way switch and volume control pot, but I’m using a push/pull switching pot for the tone control to utilise the full potential of the bridge pickup I’m installing.

The Oil City Wapping Wharf that we’ve chosen has tappable extra windings, with the main coil wound to 10k with 43-gauge wire. That might seem hot, but 43-gauge wire is thinner than the usual 42-gauge, so the resistance is naturally higher. The extra windings add another 5k for higher output and extra midrange and this boost will be accessible via the push/pull switch.

The bulky Orange Drop tone capacitor is replaced with a Russian military paper/oil type and I use a Mallory 150 0.0047uF for the Eldred mod setting. Sourcing a push/pull pot with a solid shaft can be difficult, and Tele knobs can be a bit wonky when they’re mounted onto split shafts. The workaround is to use a little brass sleeve that slips over the split shaft and effectively turns it into a solid shaft.

In addition to fitting some flat-top knobs, the owner has requested steel saddles. A set of non-compensated and non-threaded saddles was duly ordered from axecaster.co.uk but they look a bit too shiny for our relic’d partscaster. Since I’m artificially ageing the tuners in hydrochloric acid fumes, I put the saddles and knobs in there too.

The tuners take an hour but the saddles need two more before they look nicely dulled. I’m hoping this method will keep the height and intonation screws rust-free and moving freely. It’s not always the case when metal parts are electronically aged in saltwater. After a quick wiring check, the guitar is ready for restringing and a quick setup.

Esquires are reputed to be more resonant, lively and sustaining than Telecasters thanks to the reduced magnetic string-pull of a single pickup. I have never fully bought into that theory and still don’t, but this Esquire conversion offers something so different to a regular Telecaster, I could seriously contemplate having one of each.

The front-position Eldred setting takes the Esquire into the realm of a Les Paul Junior, with a thicker and more adenoidal voicing that is fantastic for powerchords and soloing. And with the facility to preset treble roll-off in the middle position, the tonal range is impressive.

Some experimentation with the value and type of capacitor used for the front position may be worthwhile because much will depend on your amp and speakers. 0.0047uF is a great starting point – smaller values will brighten the tone and larger values will darken it.

Overall, it’s nothing like a three-pickup guitar, but it can produce three very distinct voicings. I also find that the steel saddles have helped to make the guitar livelier, and that’s apparent even with the same old set of strings. This project has been a lot of fun and doesn’t require specialist skills or tools, so if you don’t like the neck pickup in your Tele, removing rather than replacing it could be the smart move.

Visit youtube.com/theguitarmagazine to see the accompanying video and head to huwpriceguitar.com to find out more about Huw’s work.