Turning our attention back to our Martin kit build, it’s time to look at the all-important top and back bracing. We have some important decisions to make and take inspiration from a pre-war design. 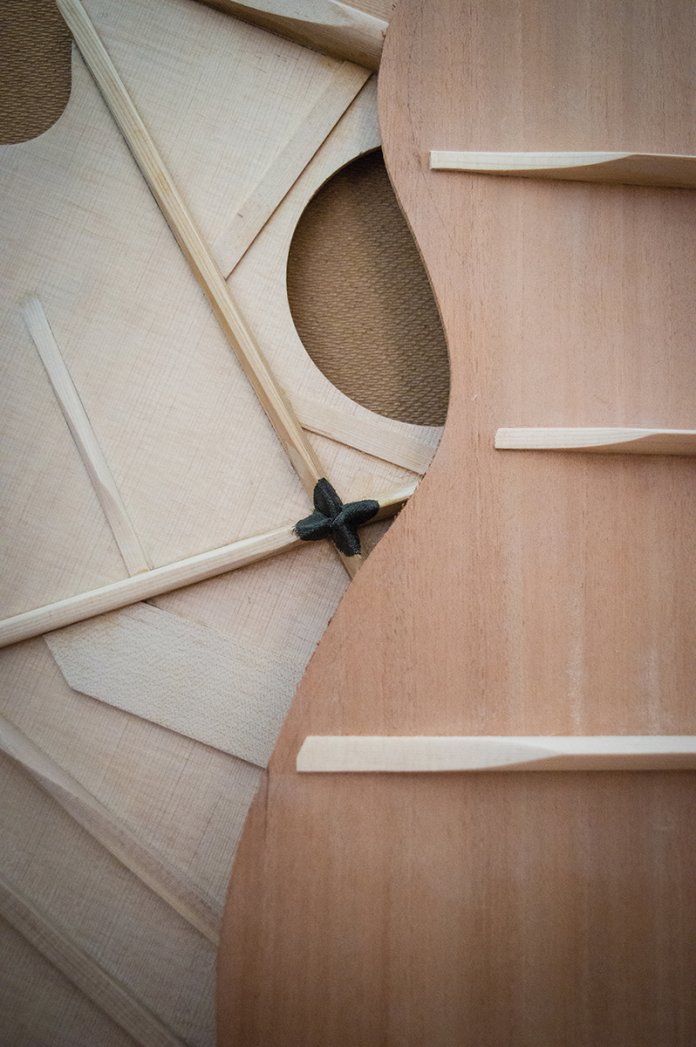 When we last looked at our Martin acoustic kit build back at the tail end of 2017, I joined the back, levelled the kerfing and even popped the bracing in the oven for a bit of at-home torrefaction. Now it’s time to return to the bracing, and with that comes a few important decisions that I’ll have to make.

Few guitar builders will take the risk of leaving the joined back plates without back graft strips – strips of wood with the grain running perpendicular to the back plates are glued over the back’s join line for reinforcement.

To avoid wastage, the Martin kit’s back graft strips have been rough cut from scrapped spruce tops, and it’s possible to see pencil marks for brace positioning on a few of them. The edges are very rough, so my first task is to try and clean them up using a sanding block. Once the edges are smooth, I roll over them and line up the selected strips on the back.

Gluing back grafts can be problematic, because several clamps with very deep jaws would be needed. Instead it’s common to use something called a ‘go bar deck’, which usually comprises rigid top and bottom plates held together by long corner pieces. The work is placed on the bottom plate and flexible rods – also known as go bars – are fitted between the work and the top plate to press down on the pieces being glued.

You can improvise something similar using your kitchen work surface and wall cupboards, with dowel rods serving as go bars – it looks a bit Heath Robinson, but it works! Just make sure that you place something between the rods and the parts you’re clamping so the rods don’t damage the wood. I apply hide glue to the grafts and after a few hours, remove the rods.

Having glued the grafts across the brace lines, notches must be made to fit the braces. Using the pencil marks provided by Martin for reference, I place the first brace in position and clamp it down at each end. With a sharp pencil, I mark each side onto the back graft where the brace crosses and unclamp the brace.

Using a very fine-toothed saw, I make two cuts through the back graft and stop just short of the back plates. A narrow chisel makes light work of removing the wood and I use a narrow sanding block to clean up any wood shavings and glue residue.

The idea is to ensure that the braces fit tightly into the notches – but not too tight. It’s better to make them slightly too small and then gradually open them out. Once they push in with just a little gentle persuasion, the gap will be just right.

Now I have to make what may turn out to be the most important decision of the kit build. It’s well known that Martin’s bracing style and positioning has undergone changes over the decades. Many of the revered pre-war Martins had what has become known as ‘forward bracing’.

The back-shifted bracing stiffened the top, making it better able to cope with the pull of the heavy steel strings that had become standard by the late 1930s. It also ensured that Martin would be less inundated with warranty repairs.

The downside was that the later bracing pattern made the guitars quieter and less dynamically responsive. This is one of the major factors behind the vogue for vintage Martins that developed during the folk boom of the early 1960s. Eventually Martin acknowledged this and many of today’s vintage-style Martins feature pre-war forward-shifted scalloped bracing – with the caveat that you should use light gauge strings.

Our kit arrived with the top marked out for newer-style bracing, and none of the braces are scalloped. So, the issue is whether to build as supplied, or customise it for in an attempt to achieve a more vintage tone.

I decide on the latter, but I don’t have the bracing pattern for a vintage Martin to refer to. Thankfully, Lucky Fret Music offered a 1932 000-28 for me to examine, but how can you create an accurate bracing template without dismantling the guitar?

The trick is to place a light source inside the guitar body and block the soundhole with something black. Next, draw the curtains, or close your blinds, and turn off your lights to make the room as dark as possible. For obvious reasons, it’s best to do this at night. If the light source inside the guitar is strong enough, the top will glow and the braces should show up.

Pieces of low-tack masking tape are placed onto the body at the ends of all the braces and at junction points along the X. Taking a pencil, I mark all the brace positions onto the tape and turn the lights back on.

The pencil lines are then drawn over with a black marker pen to add intensity. With a body outline traced onto four sheets of A4 paper, I place it over the body. The reference lines on the masking tape show through and I mark the brace locations onto the template. From there I merely connect the lines and within minutes I have a very accurate 1930s Martin bracing template.

To transfer the vintage bracing layout onto the kit’s spruce top, I lay my paper template over the top and mark the end positions of the 1930s braces onto the spruce. Again I join the dots, so to speak, and to compare the two patterns I highlight the 30s bracing with some green tape. The modern bracing pattern markings are removed with a pencil eraser and some light sanding to prevent confusion when I’m gluing. At this point I also decide to use some X braces left over from a previous acoustic build project.

The notches in Martin’s main braces were cut for the narrower angle, and the looseness of the joint causes some concern. The leftover braces are pre-scalloped and the crossover notch is already cut for the wider pre-war bracing. Since they’re 10-year-old leftovers from a slot-head 000 kit, I don’t feel any need to bake them like I did with the new ones.

The length of the X braces makes it hard to use the go bars, so I use regular clamps for gluing up. Having the soundhole makes it easy to get the clamps where you want them, and I’m able to glue the upper face brace at the same time.

Once the second X brace and ‘popsicle’ brace are attached, I use go bars to fix both tone bars, with a single clamp on each finger brace. Three thin soundhole braces are also glued on. For these, I don’t bother with clamps, because hide glue pulls the pieces together as it sets – so it’s basically self-clamping.

Having built some acoustics previously, I have three bridge clamps and they’re one of the few specialist tools it’s hard to do without. Here I use them to glue a wider bridge plate made from a scrap of maple. Before gluing, the ends of the finger braces, tone braces and bridge plate all have to be angled to fit tightly against the X braces. I rely on my template for the initial cuts then make things exact with a square sided sanding block.

This is where things really start to get exciting – or daunting, depending on your point of view. It’s time to shape and modify the braces to get the top and back plates resonating like drum skins. This is a process called tap tuning and it’s regarded as a key skill in acoustic guitar building.

Berkshirte luthier Dave King mentored me through my first acoustic build, but when it came to tap tuning, he told me it was just something you develop an instinct for over time. Back then, I suspected he was fobbing me off and telling me to figure it out the hard way just like he had. Several years later, I realise he was merely being honest!

Tap tuning involves removing material from the braces to loosen the top and back in order to promote vibration and enhance tone. However, if you take away too much of the bracing material, the guitar may end up sounding indistinct and boomy, and in a worst-case scenario, its structural integrity may be compromised.

You can find tap tuning video tutorials online and few are better than one from US boutique maker, Dana Bourgeois. I’m certainly not qualified to instruct anybody on the subject, as quite frankly, I’m still winging it on this guitar and trusting my instinct as Dave instructed!

However, I can give you an overview of the process I’m following. Starting with the back braces, I use a very sharp chisel to shave the sides until the rounded tops become sharp peaks. By removing material from the sides of the braces rather than the top, they become lighter and looser without losing strength. I also taper down the ends so they end up only a few millimetres above the back plates.

As I progress I can hear the back getting more ringy when I tap it. Try to find a nodal point to pinch the back between your thumb and index finger. When you hit the spot, tapping the back with the fleshy part of your middle finger should produce a series of clear notes across the surface. Here I’m just trying to get the back sounding musical while doing a neat job of carving. I’m certainly not trying to achieve specific notes or intervals.

Voicing the top is a little more involved because there are so many braces of different sizes and shapes. In addition to shaving some of the brace sides to a peak, I’m also using Martin’s pre-war technique of scalloping.

My recycled X braces give me a head start since they’re already scalloped in the area behind the X intersection and I glue a round linen patch over the intersection. The lengths beyond the X are tapered rather than scalloped and I leave those as they are.

I begin by shaping the four finger braces, tapering one end to meet the X braces and the other to feather into the top. With a nice ramp at each end, I shave the sides to bring the high spots to a sharp peak.

Like the kit X braces, both tone bar braces arrived un-scalloped. So, I set about tapering the ends, carving the scallops and sharpening the peaks. At this point I’m pretty much copying pictures of vintage Martin bracing and the procedures I’ve observed in online demos.

All the while I’m tapping the top while suspending it from nodal points. You have to hunt for them but when you find one, it will allow the top will ring when tapped rather than dampen the vibration. As I remove wood from the braces, I can feel and hear the top loosening up. Notes ring clearer, sound purer and there are more of them.

In a surprisingly short amount of time I get to the point where my instinct tells me to stop. Both the top and back are ringing, even when they’re merely being handled.

Using my chisel and sandpaper, I clean up the rough spots and glue squeeze out and I’m finally ready to glue the body together. I’ll be covering that and much more in the next kit build instalment.