Find out how an improvised solution can remedy a frustrating tuner-bushing issue.

In the interest of open and honest communication, I have to get something off my chest: I’ve had my dear friend and bandmate Roberto’s Jazz Bass for far, far too long.

In August 2018, Roberto mentioned that his favourite instrument, a 1991 American Vintage ’62 Jazz Bass, was incredibly tough to play. I gave it a quick once-over during practice and it was immediately obvious to me that the neck had too much relief. 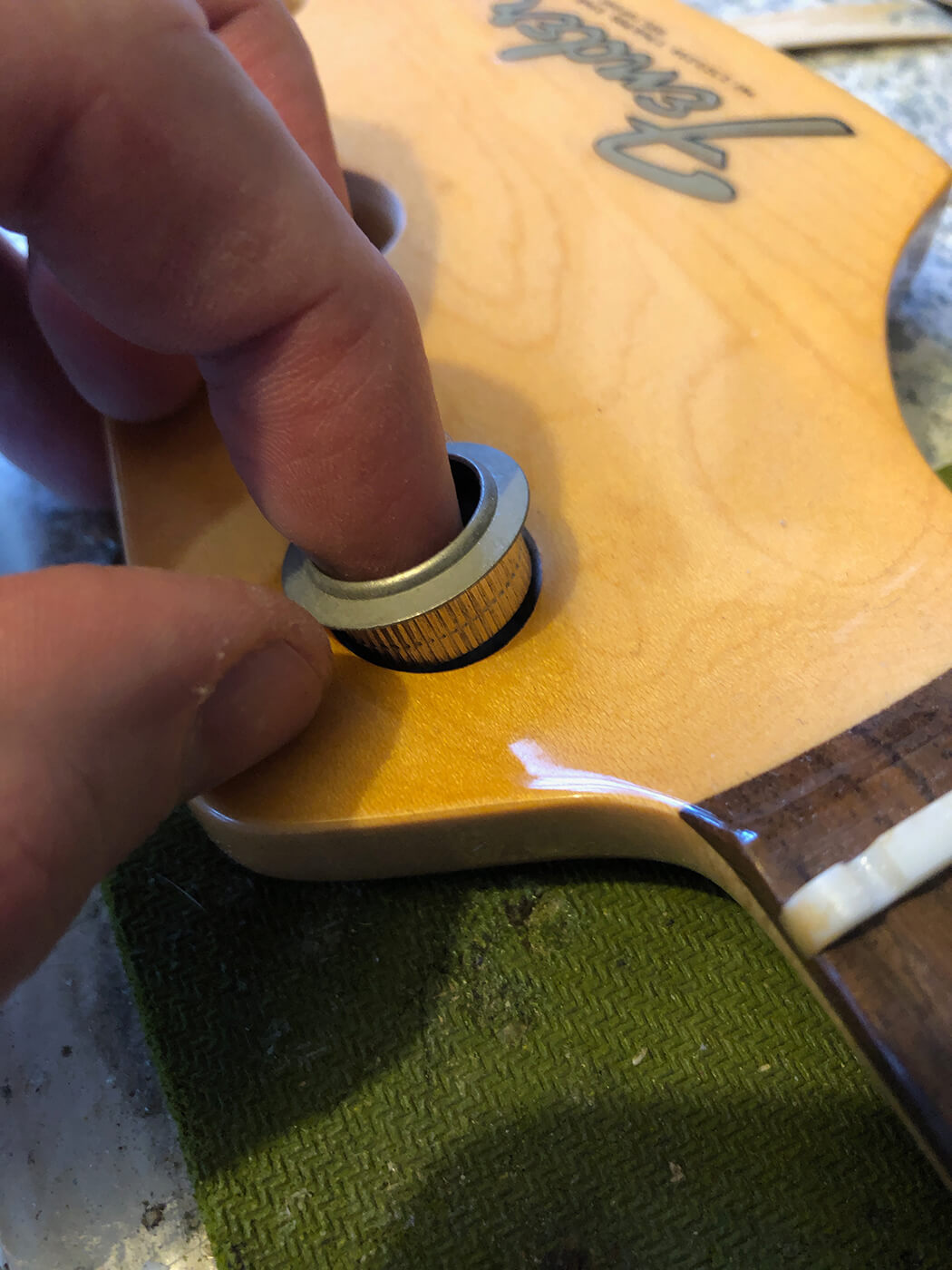 He dropped the bass off for a proper check-up that September and, when I removed the neck, I discovered that the truss rod didn’t have enough tension to dial out the bow. At Roberto’s behest, I spoke to a few luthier friends who have had success in using heat and corrective compression to retrain the wood into a more favourable position. All agreed that the problem was far too extreme for that treatment.

After a series of long discussions with Roberto about his prized bass, he expressed his desire to keep it as ‘correct’ as possible, so we decided to track down another AVRI ’62 Jazz Bass neck, which proved incredibly difficult. I won’t bore you with the finer details but suffice it to say that we spent many months trying to find one at a fair price and, when we couldn’t, Roberto bought an American Professional neck and sent it over instead. Its profile and untinted finish, however, just didn’t work for him. Our search continued. 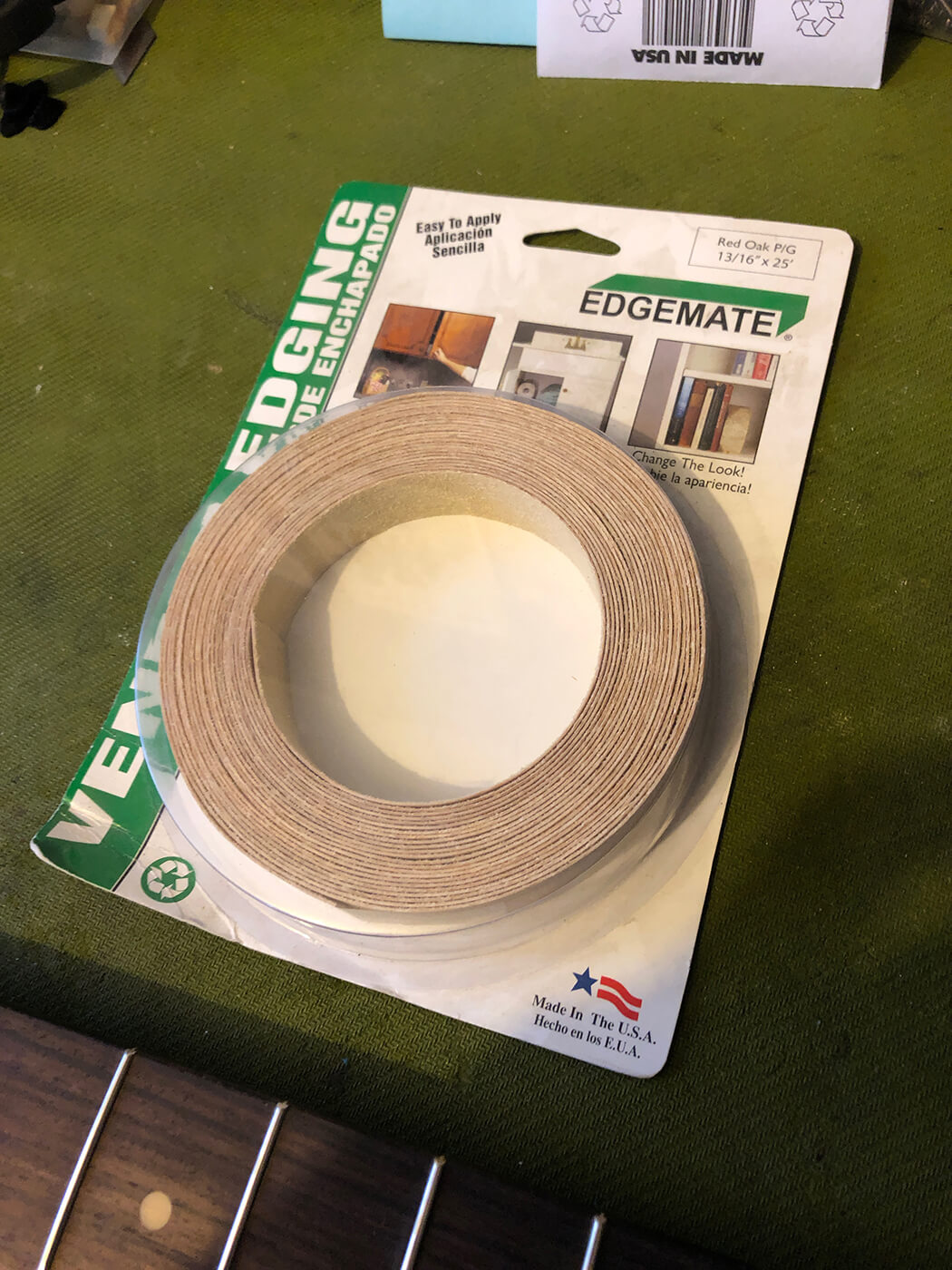 In January 2020, I was finally able to cash in a few favours with my dear friends at Fender to score a new replacement neck from the American Original ’60s range. Sure, the radius is slightly flatter (9.5 inches to the American Vintage’s 7.25) and it has a round-lam board but, hey, at least we gained the look of ‘clay’ dots.

After using his backup bass for so long, it looked as if Roberto would soon have his number-one back. But, to our mutual chagrin, another issue soon reared its ugly head, keeping the long-suffering lovers apart a while longer. 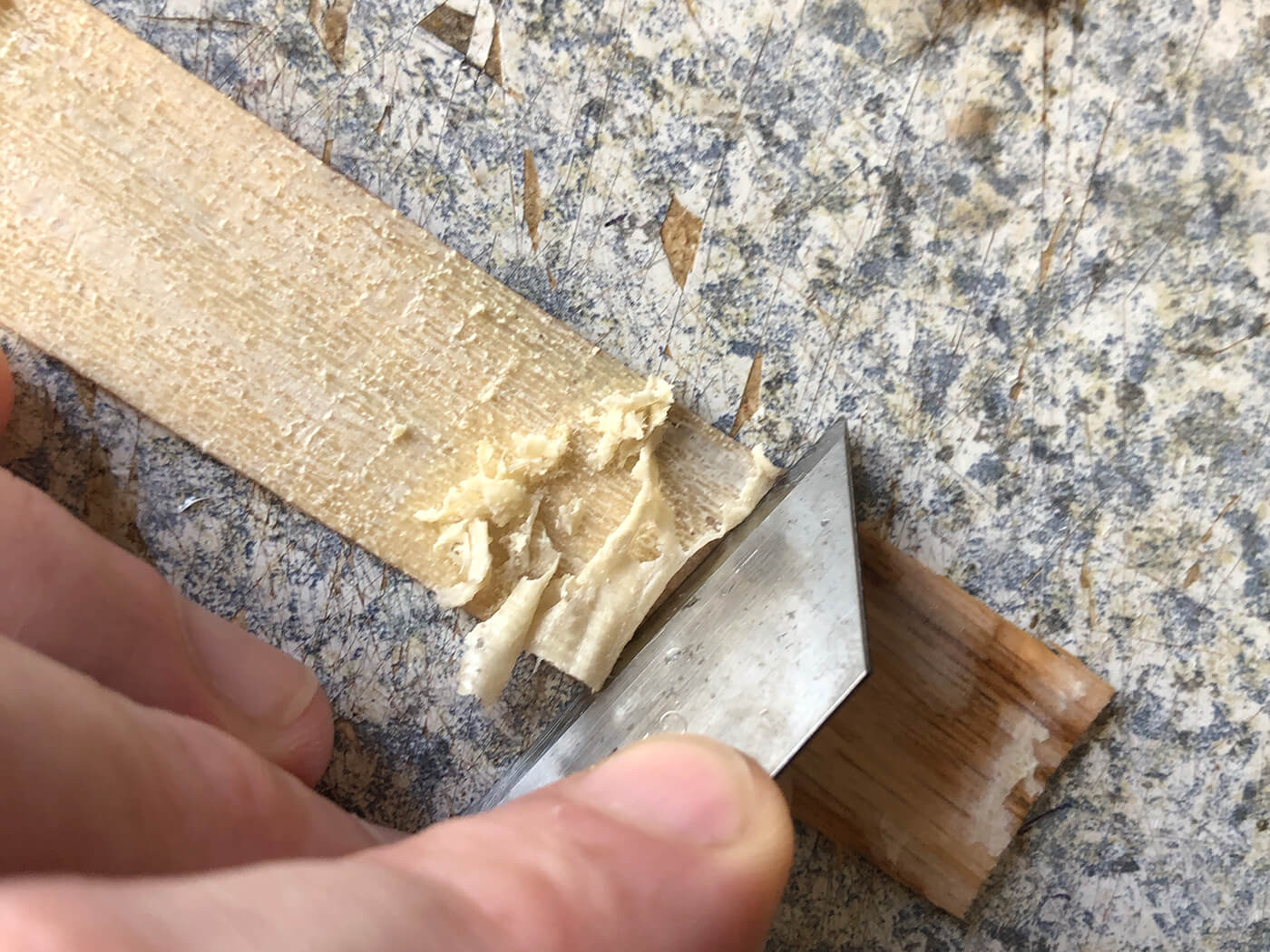 When manufacturers refresh a range or introduce new model, specifications can change somewhat unpredictably for the end user, with small parts that you’d rarely give a second thought to all of a sudden not fitting. With this neck, the issue came down to tuner bushings.

Bushings are those little surrounds that act as a barrier between the tuner shaft and the bare wood, which are meant to protect the wood from wear while keeping the shaft upright against the tension of the strings. An unsung hero of tuning stability, these demure doughnuts are simple yet crucial components. 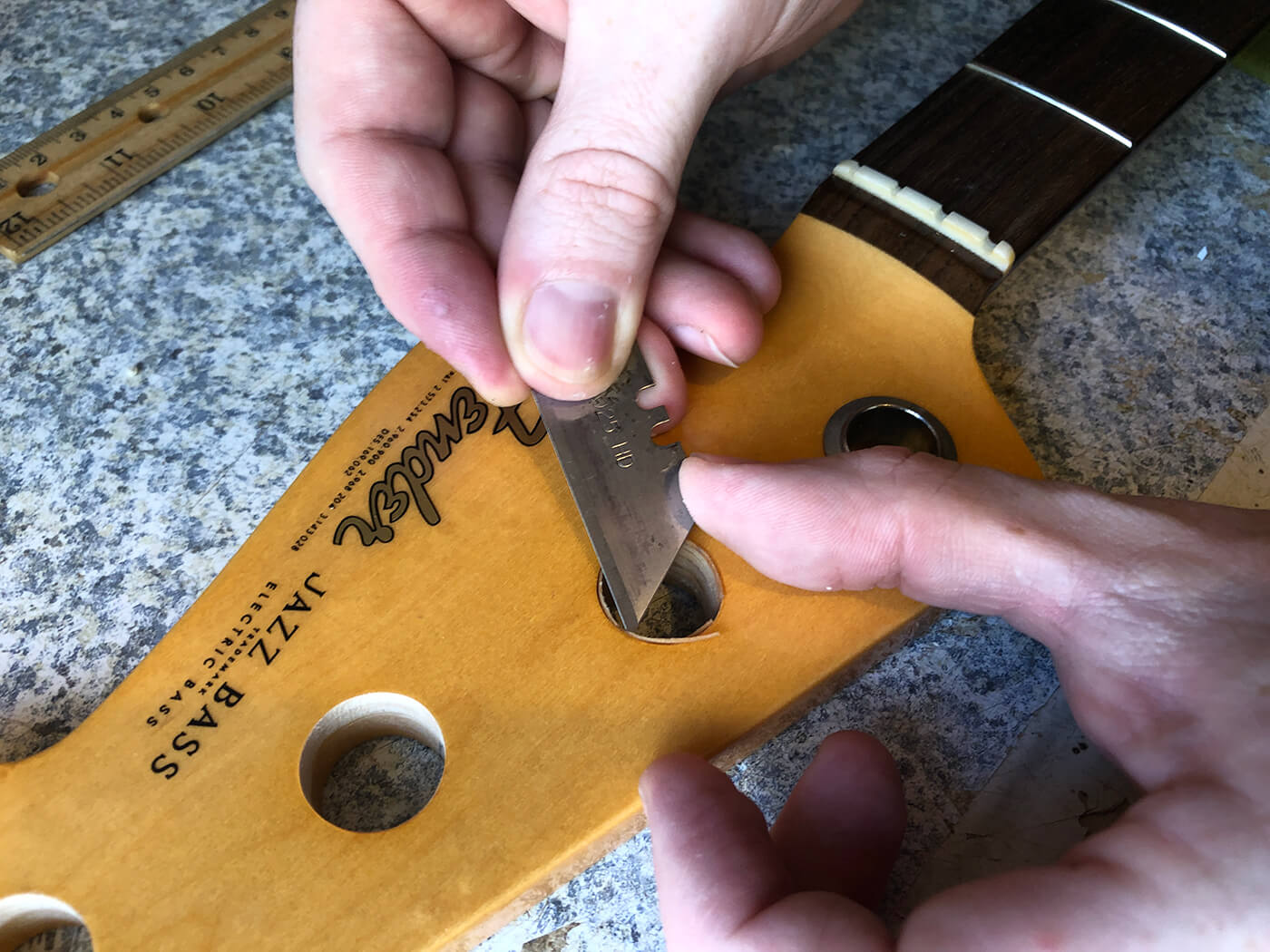 Our new American Original neck had wider holes than Roberto’s American Vintage’s but that’s no big deal – it’s easy enough to order the right bushings online, which I did. I checked the specs, looked up the current part number and ordered the correct parts. They arrived – and they didn’t fit either. Okay, fine. I double-checked, took some more measurements and ordered another set. These ones were going to match.

They didn’t. This was getting frustrating.

In the interim between ordering and receiving the new bushings, I heard about another common issue. It seemed that loose factory fittings had been a problem as of late. I’d have to find another solution.

By the time I found all of this out, the COVID-19 pandemic was in its earliest stages in the US, and we were all wondering how it would pan out. I knew that ordering more parts would be tricky with the slowed shipping of non-essential items, plus I’d been burned twice already and wasn’t eager to be singed again. At any other time, I’d have gone over to the workshop of one of my builder friends, plugged the holes and re-drilled but that was no longer an option.

I hatched another plan. On the one day we allowed ourselves to go out and gather supplies, I visited a hardware store in search of veneer, specifically the thin kind used to line the forward-facing edge of shelves. Veneer can be found in many different types of wood but the store only had adhesive-backed red oak. 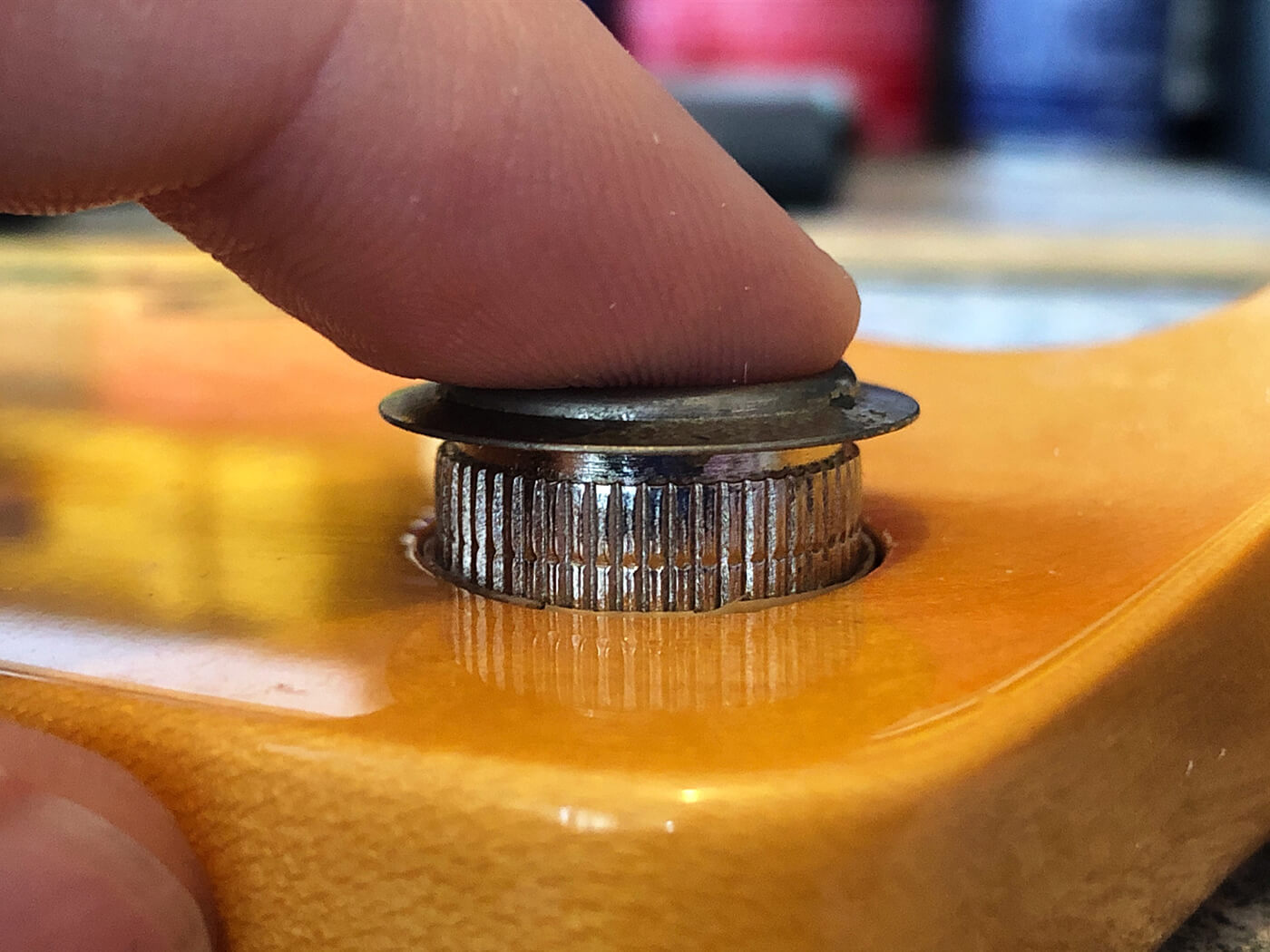 This type of veneer comes in handy around guitar repair shops. I use it most often to shim the gaps around a neck in a slightly oversized pocket. I thought it might be of use here to line the bushing holes. With any luck, Roberto would have his bass back in no time.

The first step of this procedure was scraping off the adhesive backing of the veneer strips, a process made much easier with the use of hot water. I used a razor blade to scrape off the damp glue. 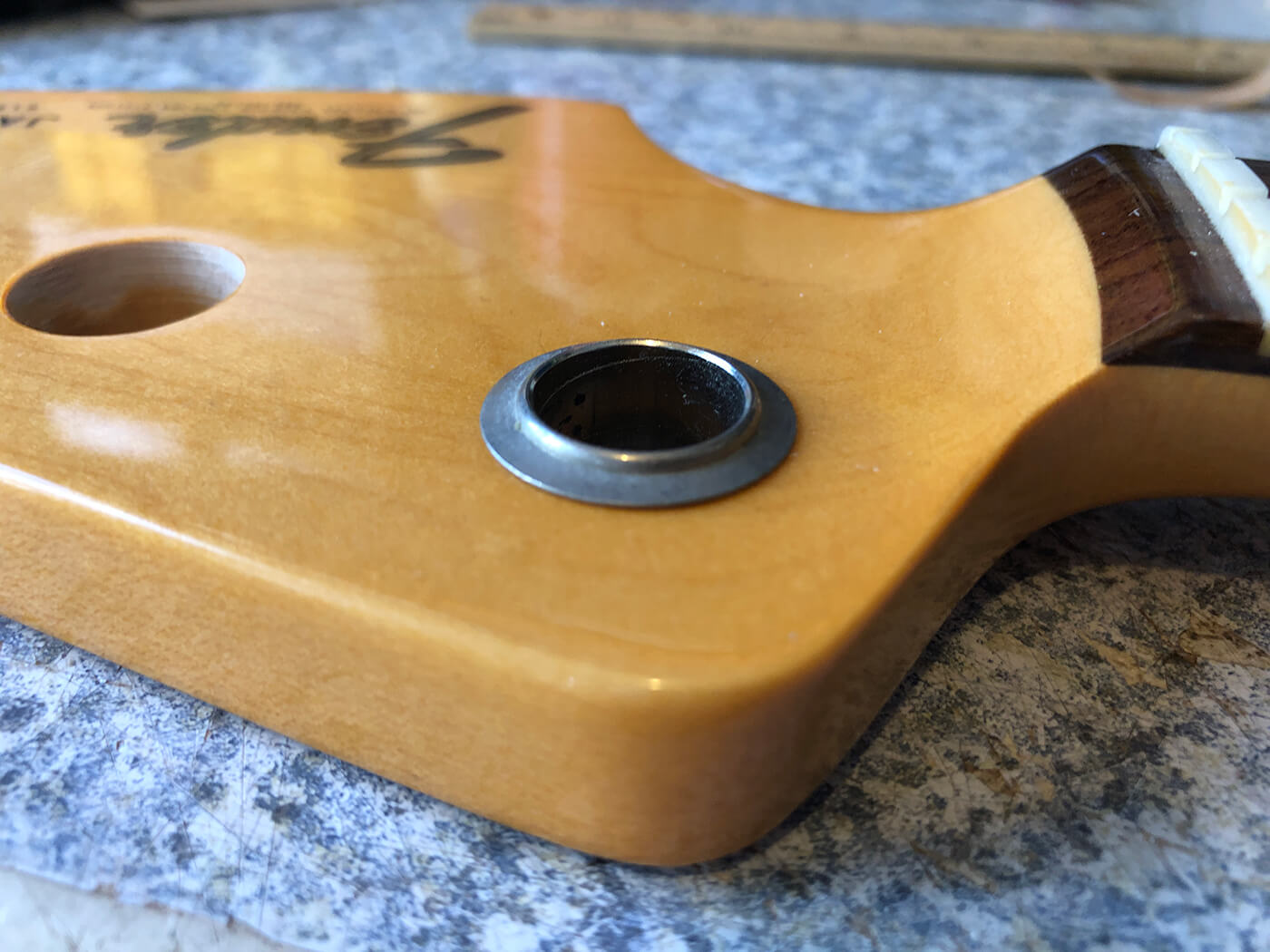 Next, I cut each strip to a length of 2.5 inches, slightly more material than I required to fill in the gap between the bushing and the headstock. I let my kettle heat up for the next step while I checked measurements.

Inspired by the way luthiers bend the sides of acoustic guitars, I decided to bend the veneer strips by placing them in a bowl with steaming-hot water, soaking them until I could bend them around my finger. It took some time for the wood to soften but soon it was malleable enough to shape without hassle. 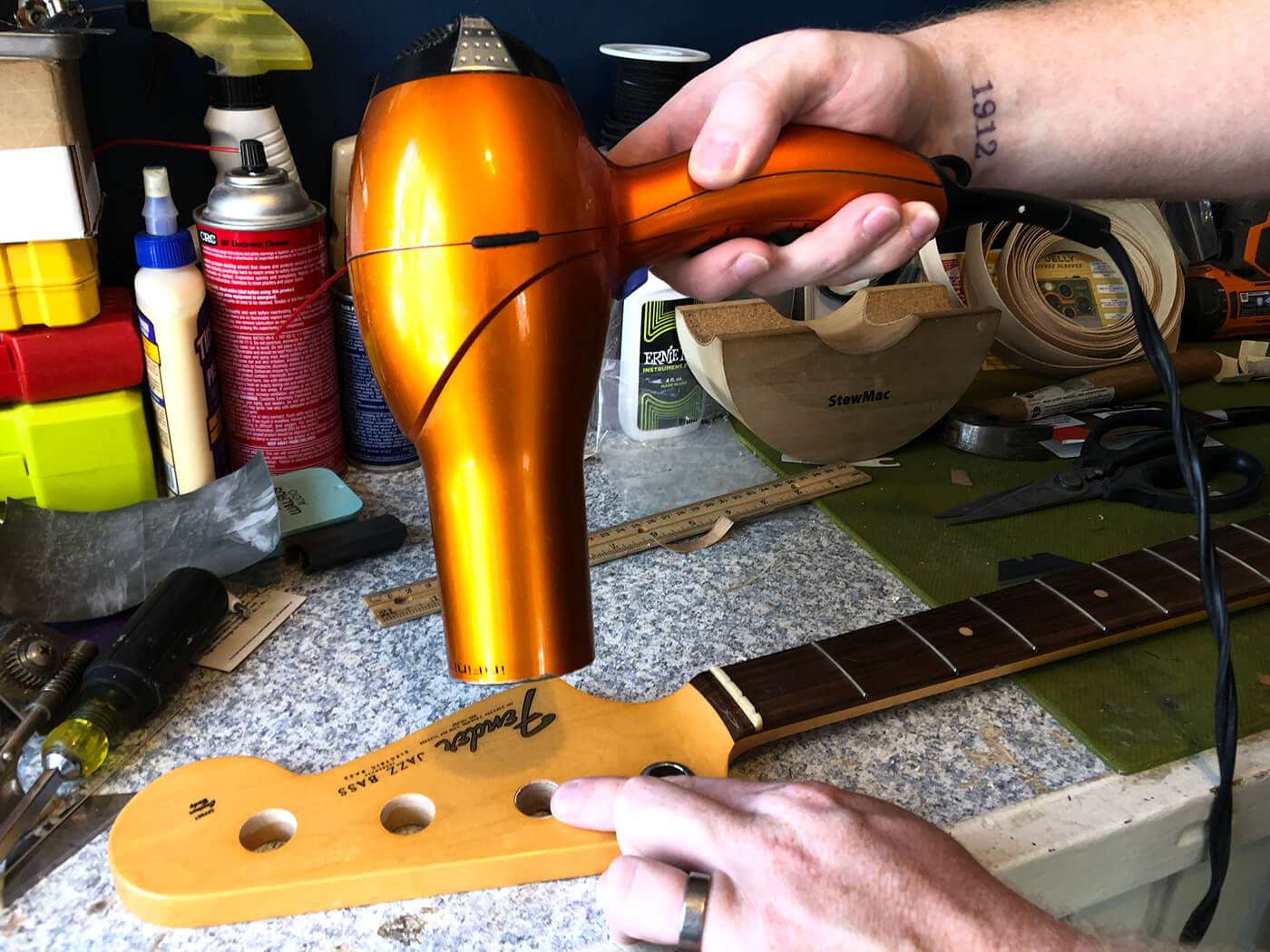 I test-fitted each strip and trimmed to the appropriate length for full coverage, then inserted a bushing to check my work. Sure enough, each bushing fit snugly, so I used a hair dryer on a warm setting to dry the veneer in place.

I stuck each strip in place with Titebond II wood glue and reinserted the bushings. After installing the tuners and slapping on a set of La Bella flats, it brought me great pleasure to see that they were set firmly in place and functioned perfectly. Job done.

I’m pleased with myself with this one. Only time will tell if this was a permanent solution. Frankly, I don’t expect it was. I’d sooner fill and drill or spend more time and effort finding bushings that actually fit than resort to kettle-and-veneer tactics. But poor Roberto’s been missing this bass, and this works well enough that he won’t have to wait any longer. I call this a win. 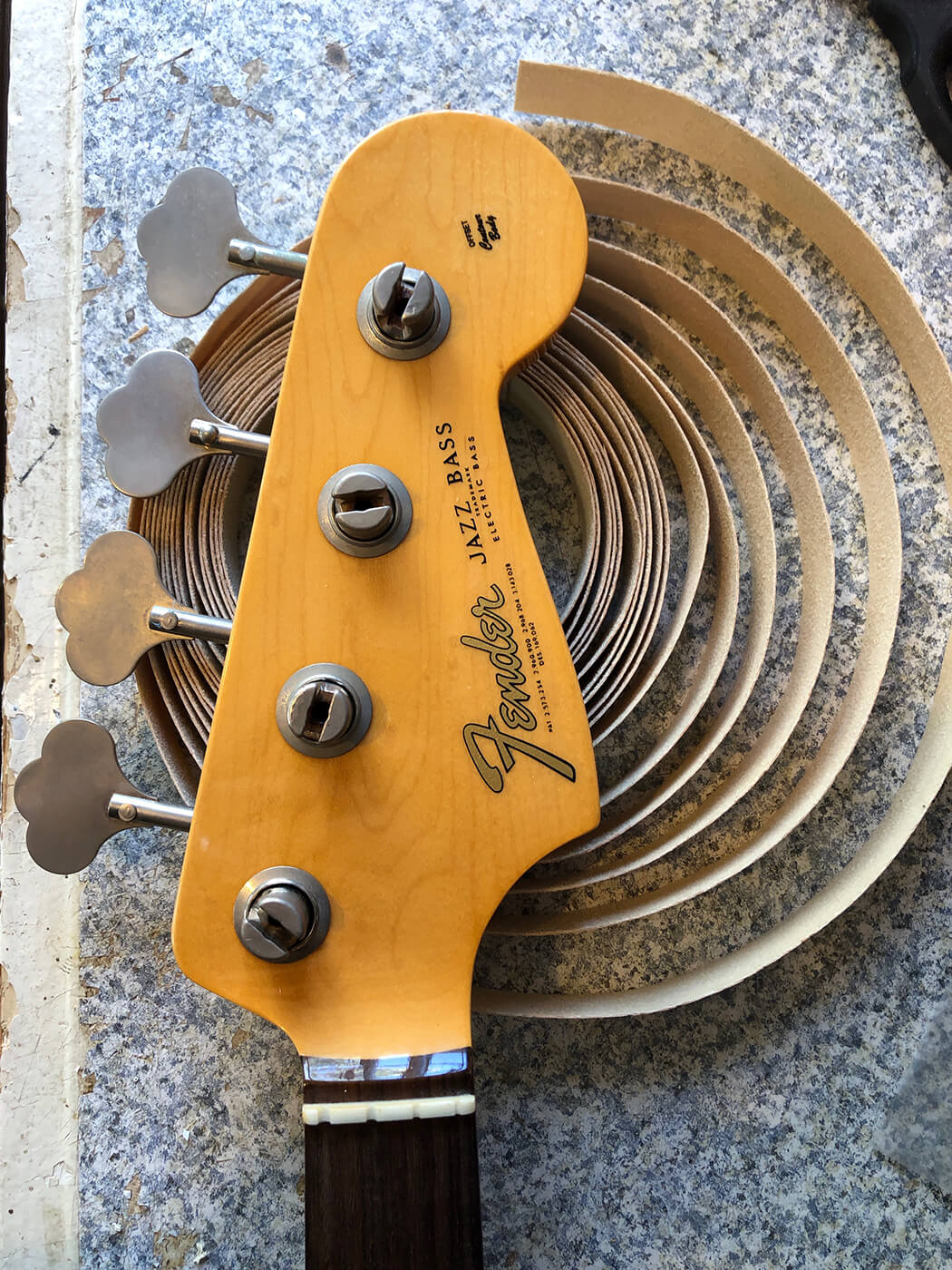 Now to wipe it down with disinfectant and hand it back. It’s an amazing bass and it belongs to an equally amazing friend. Stay safe out there, everybody. I’ll see you next month!